Visual Art
Revolution from Without . . .

Cataclysm as catalyst: an exhibition explores the need for a new order. 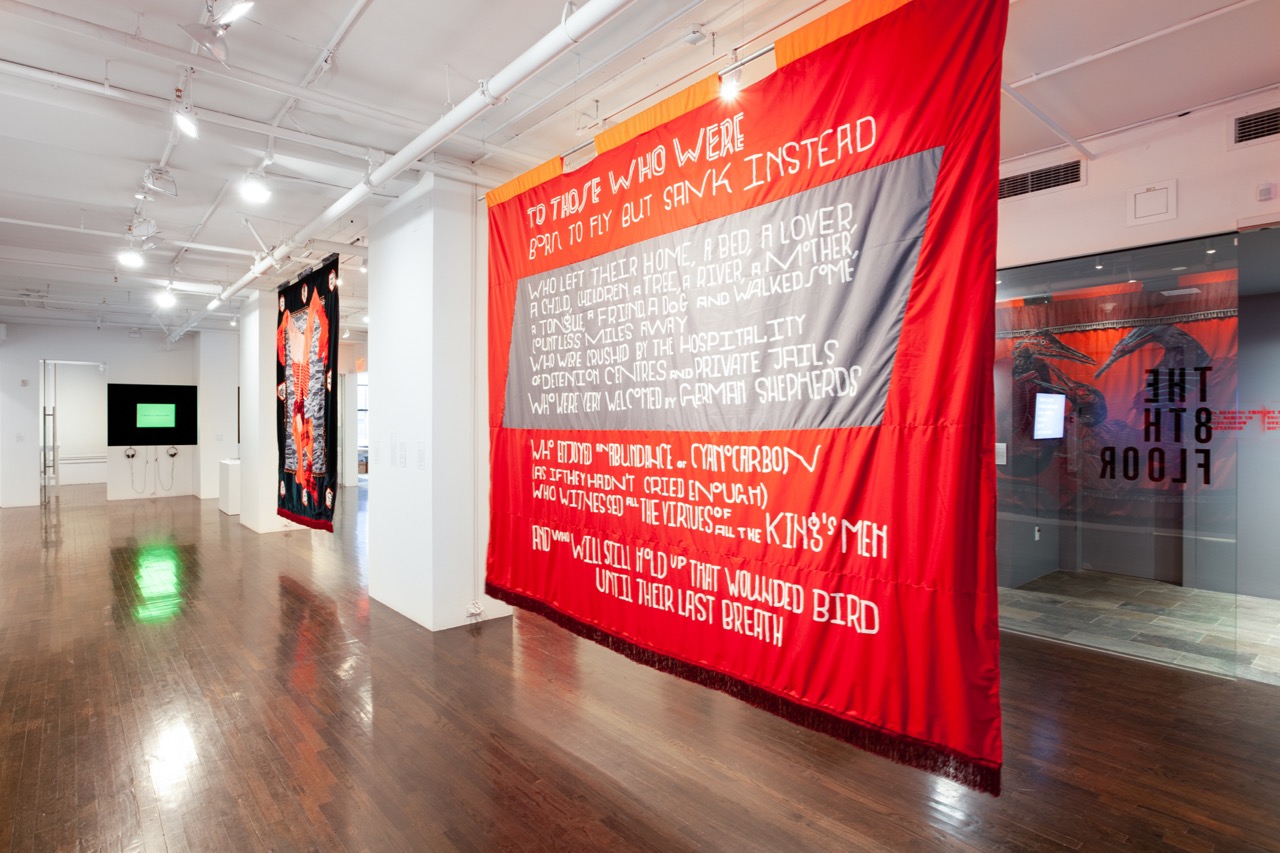 Thirty years ago, Susan Sontag described our age as one of ever-looming apocalypse, a dehumanizing state in which ruinous disaster is always almost here. She was writing at the end of the Cold War and in the early years of an AIDS epidemic; now, in 2019, the terror of nuclear warheads and viruses has been replaced in our collective imagination with that of far-right dictators and global warming. According to Sontag, apocalypse is a useful and particularly American narrative device—it gives meaningful shape to an otherwise incomprehensibly frightening flood of experience, and opens up the possibility for a tabula rasa, that all-American dream of a fresh start.

It makes sense, then, that the idea of imminent cataclysm has become a potent catalyst for art production and exhibition-making in America in recent years, with culture workers trying to propose different positions from which art might help us better fathom the myriad perils facing humanity, if not help us fight for a better world. One of the latest examples in New York is the exhibition Revolution from Without . . . at the nonprofit 8th Floor gallery in Chelsea. Curator Sara Reisman takes as her starting point Hannah Arendt’s description of revolution as an act motivated by the desire to be “free to make a new beginning”—revolution understood as an agent of apocalypse, an eschatological conflict that gives rise to a new order.

To explore the present conditions that demand such a revolution, Reisman has organized an exhibition that is read as much as seen, with most of the seven participating artists and collectives offering weighty text-based works necessitating an intensive engagement from the viewer, as if we were walking through a spatialized curatorial essay. The experience might be taxing, but it’s worthwhile: layers of nuance deepen over time, the art unfolding to complicate Reisman’s argument instead of just illustrate it. 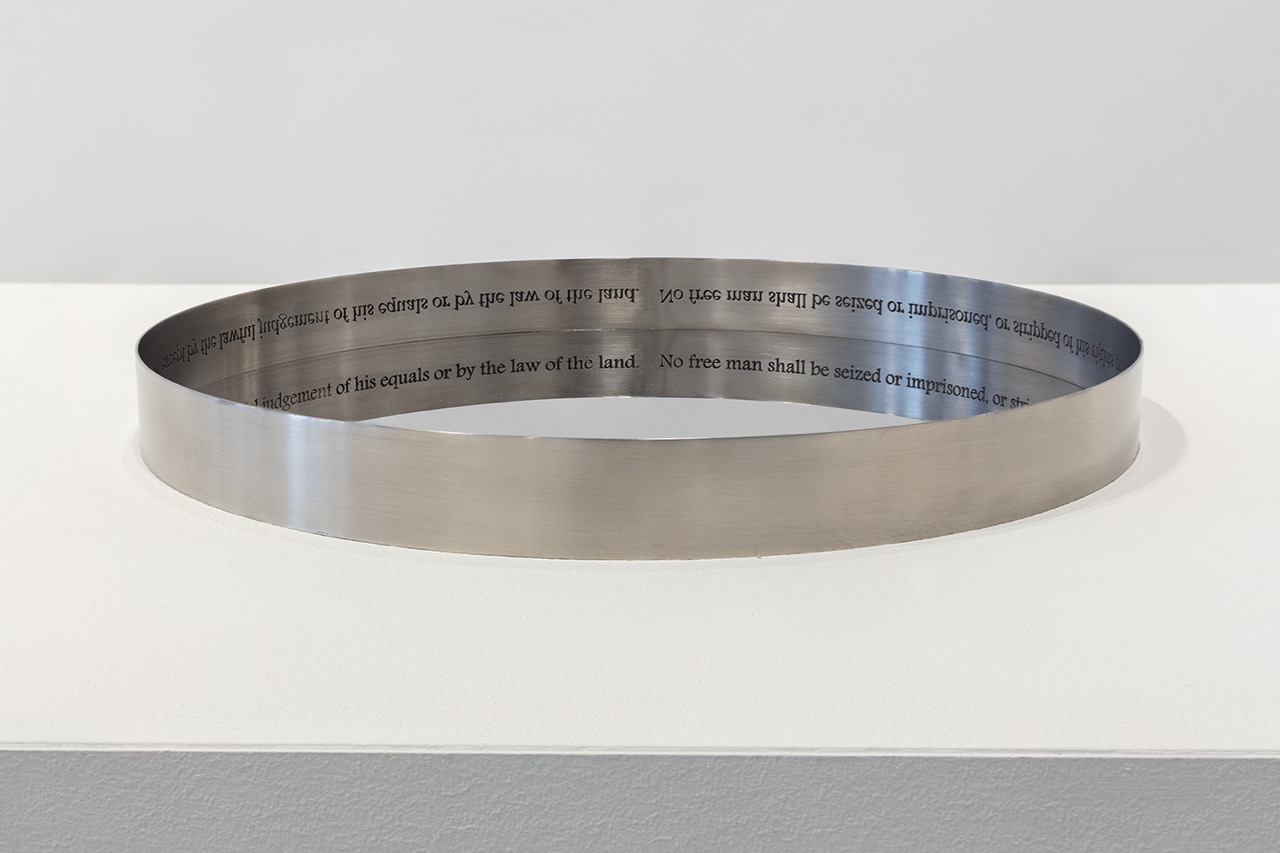 Reisman might be guided by Arendt, but feminist scholar Sara Ahmed’s writing on the intimacy between hope and anxiety could also serve as a conceptual polestar for navigating the show. The collected videos, sculpture, and installations orbit around those resonant affects, as is made clear by two of the first works encountered, both by Mark Wallinger. To the left of the entrance is a small rendering of a massive public artwork permanently on view in the UK, Writ in Water (2018). The model is a perfect circle of stainless steel, with a raised edge protecting a shallow, shiny puddle of water at the bottom; the inner wall is inscribed with clause 39 of the Magna Carta, one of the earliest documents to ensure common human rights. Here, we have hope: the hope that words, especially the solemn words of legislation, could ensure a more just society. But projected on the wall behind the sculpture, we find Wallinger’s eleven-minute video Threshold to the Kingdom (2000), which shows people arriving at London City Airport to a soundtrack of a seventeenth-century libretto that begs for relief from the tormenting knowledge of one’s own sins. Here, we find anxiety: of the artist’s own fear of flying, which motivated him to create the video in the first place, as well as of navigating the airport, with its claustrophobic surveillance networks and hostile border checkpoints. The anxiety of an imperfect present, the hope for a better future—but that hope can spark yet another dimension of anxiety, as Ahmed has noted, the anxiety that the better future might not come. 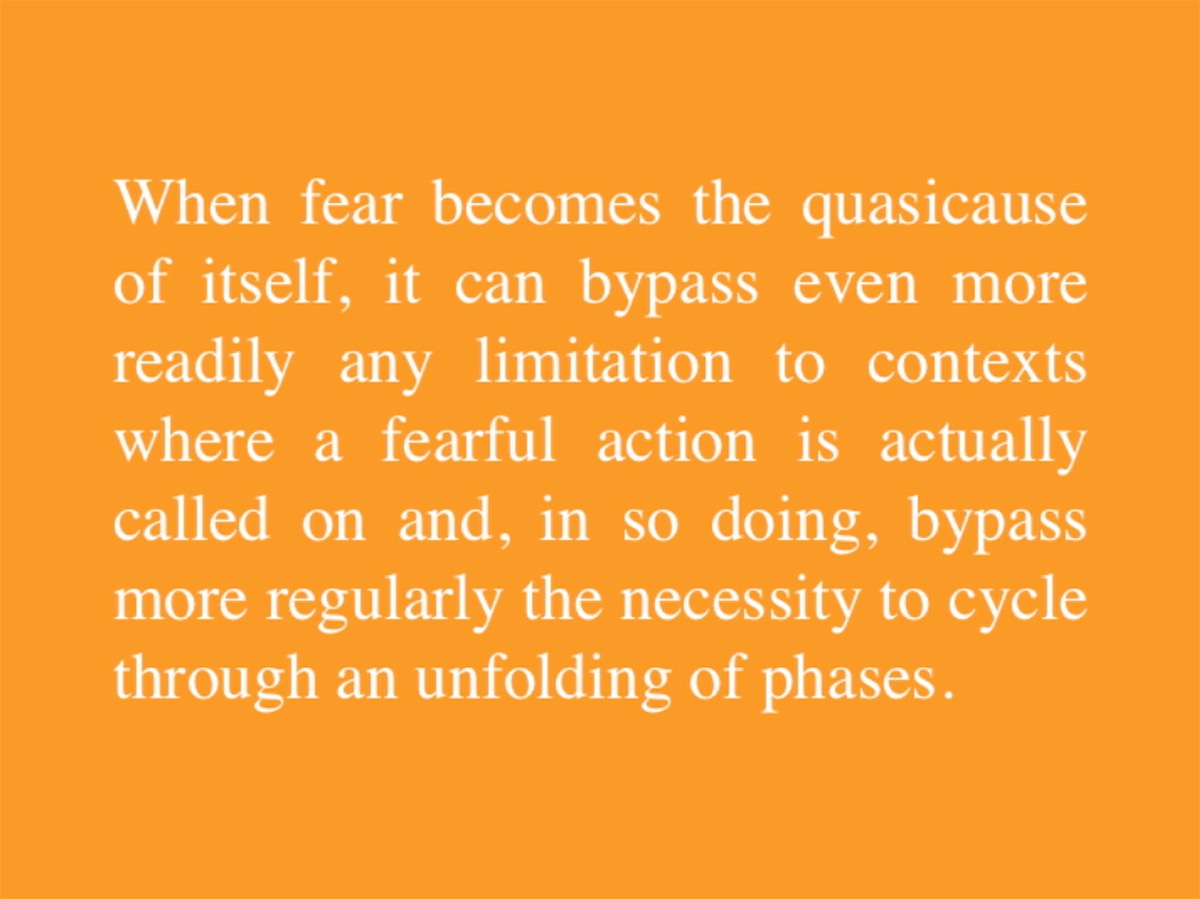 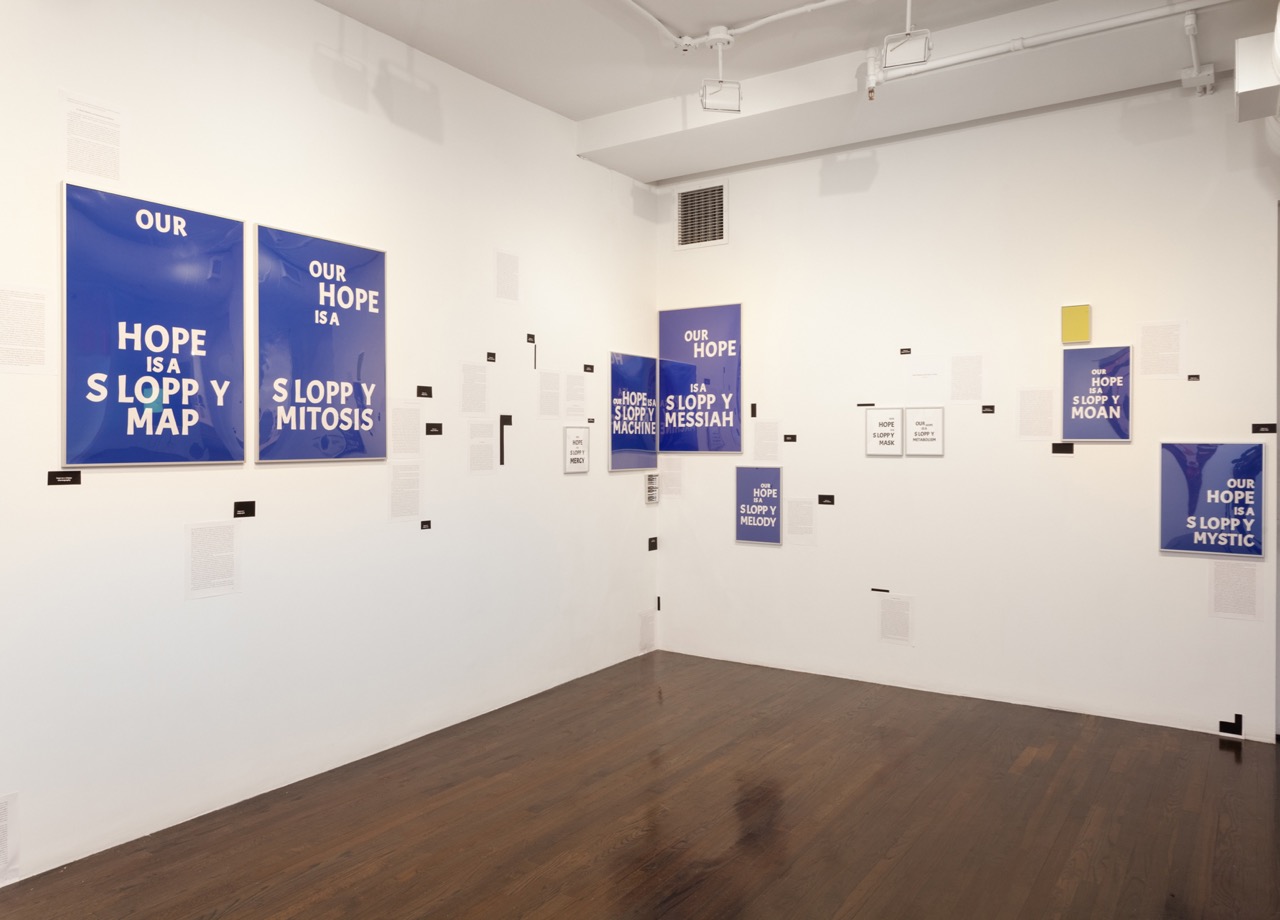 Hope reemerges in a side room, as the basic theoretical unit of Kameelah Janan Rasheed’s evolving installation A Rather Precarious Syntax (2019), where words (her own, and also drawn from scholar Calvin Warren’s essay, “Black Nihilism and the Politics of Hope”) appear on tiny black rectangles, small white pieces of paper, and imposing bright blue posters, scattered up and down the walls. “OUR HOPE IS A SLOPPY MENACE,” reads one; “OUR HOPE IS A S LOPP Y MITOSIS,” another declares. Rasheed elliptically inquires whether hope is necessary for emancipatory change, or anathema to it—hope can also be paralyzing, after all, narcotizing us into inaction and acceptance as we dream of better days to come.

Rasheed’s contribution is especially interesting for its rejection of pro forma activist language, which is often disappointingly inflected with neoliberal values of staying active, “doing the work,” serving a purpose. Some of that can-do cheeriness made its way into Reisman’s curatorial essay, which optimistically asserts “that even in the most dire of situations, we will think our way forward,” and suggests the collected artworks “could be deployed in public space, and used as actual props for protest.” And indeed, some of the pieces here, like the collective Chto Delat’s enormous cloth banners (beautifully embroidered with a poem dedicated to migrants and a passage from a torture victim’s testimony), or “artivist” Tania Bruguera’s 2016 public referendum on abolishing borders (represented through video documentation), are obviously legible as straightforward protest art imbued with virtuous use-value. Rasheed’s installation is a fortuitous complication of that form, as are two pieces by Dread Scott: a 2006 screen-printed map that encourages us to “Imagine a World Without America,” and a 2017 stencil that informs us, “By reading this you agree to overthrow dictators.” It’s no trouble to exhort, Scott implies; the problem is how to do. 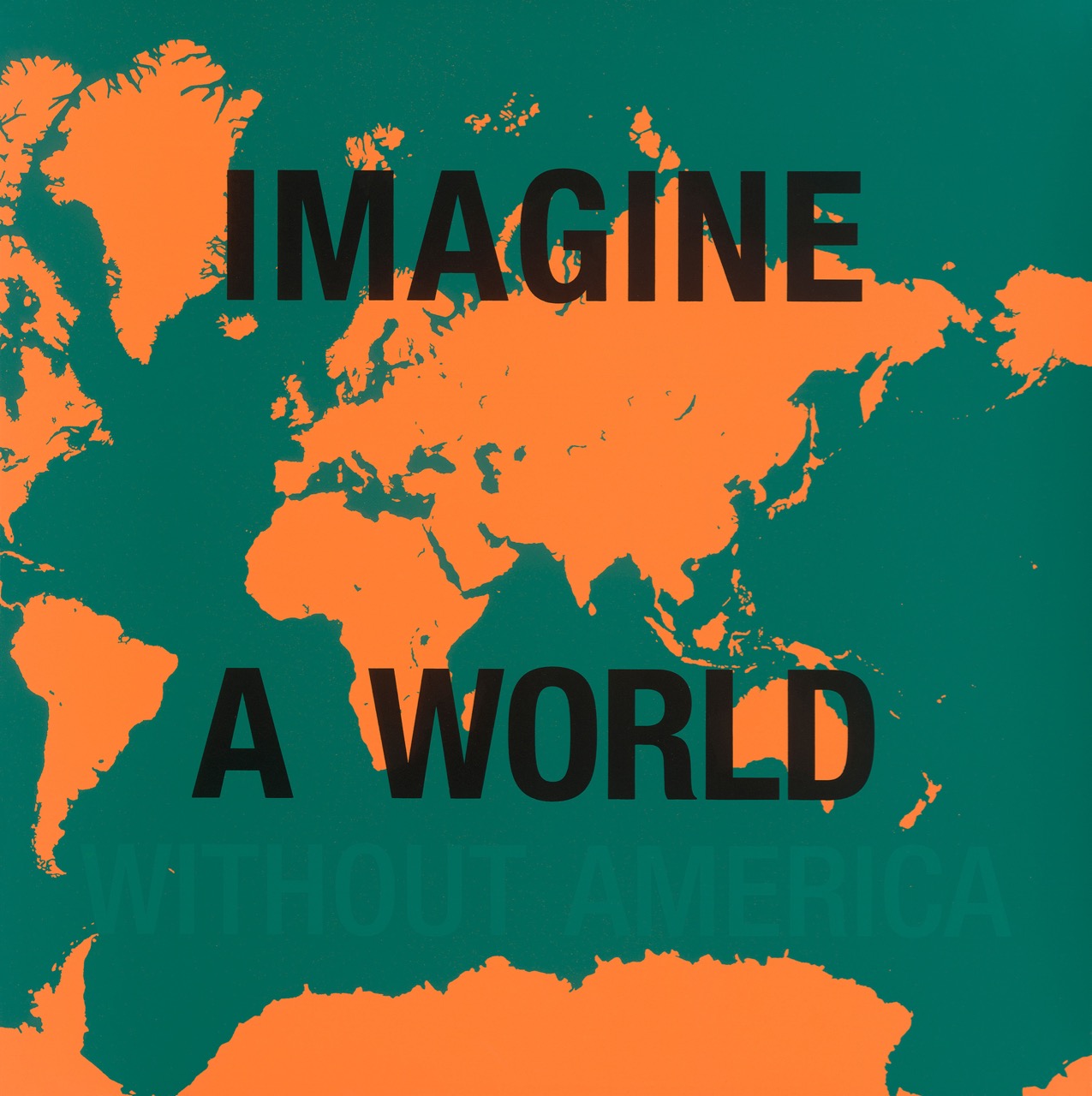 So then what? What might trigger us to change—especially when that change feels inconceivable? As cultural theorist Mark Fisher wrote, “it’s easier to imagine the end of the world than the end of capitalism,” whose attendant brutalities are what most of these artworks are pushing against. Revolution from Without . . . is the first iteration of 8th Floor’s two-year investigation into the question of how else we might live, and the exhibition is a provoking introduction to some of the big ideas that question has inspired. But while it is vital to attend to the concrete harms perpetrated in the present, as this project does, actual revolution would constitute a break with consensual reality. A mad illogic is required to picture the unimaginable, and I hope subsequent programs in the series might enter that hallucinatory realm. 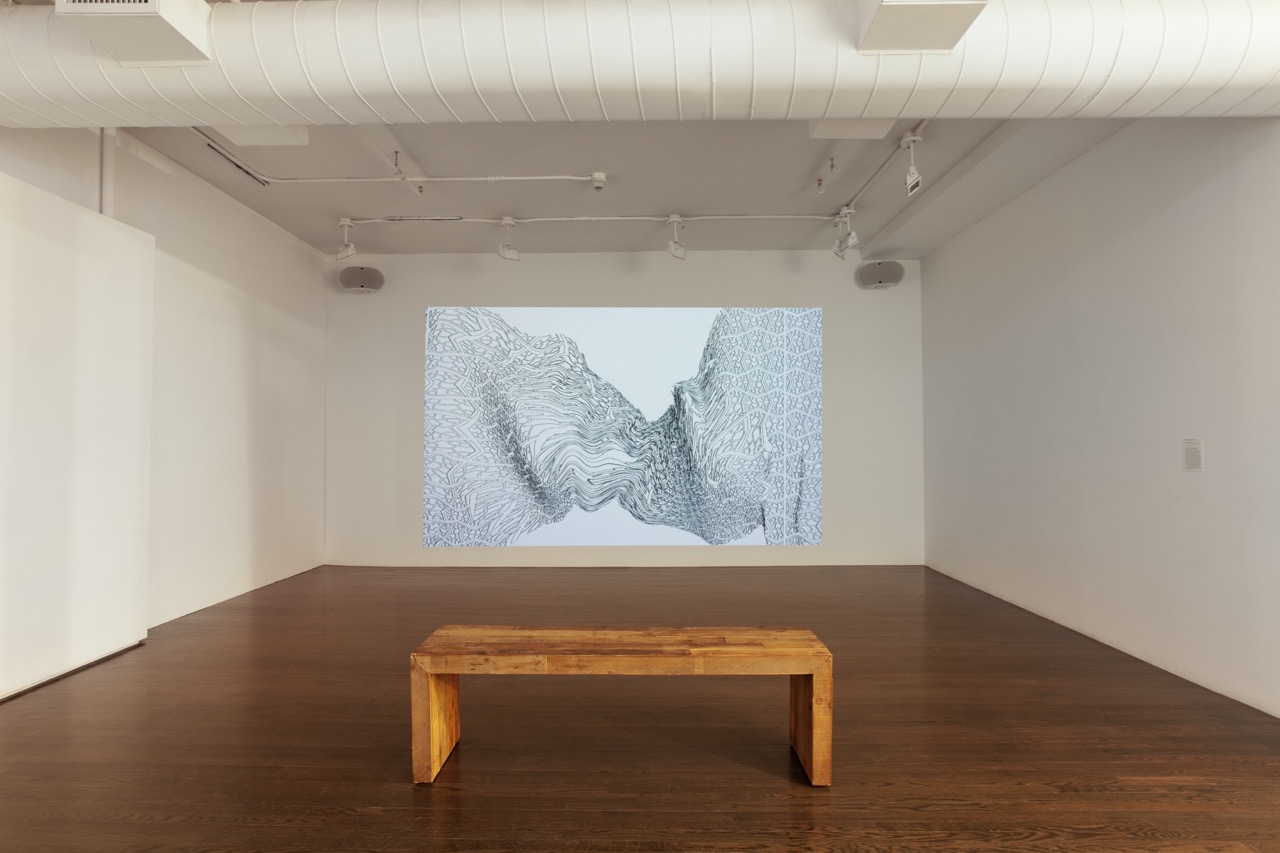 An inkling is already present here, with the Raqs Media Collective’s looping animation, Undoing Walls (2017), which takes a pattern inspired by lattice work from Mughal ruins and bends it, twists it, makes it pulsate and flow like water, as a totally absurd proposition for the border wall of the future. “It’s the universe breathing in and out,” one of the artists explains. It doesn’t make sense—and it’s in this register that a potential future might shimmer, however much of that future is left.