An exhibition gathers four decades of abstract art from the Arab world. 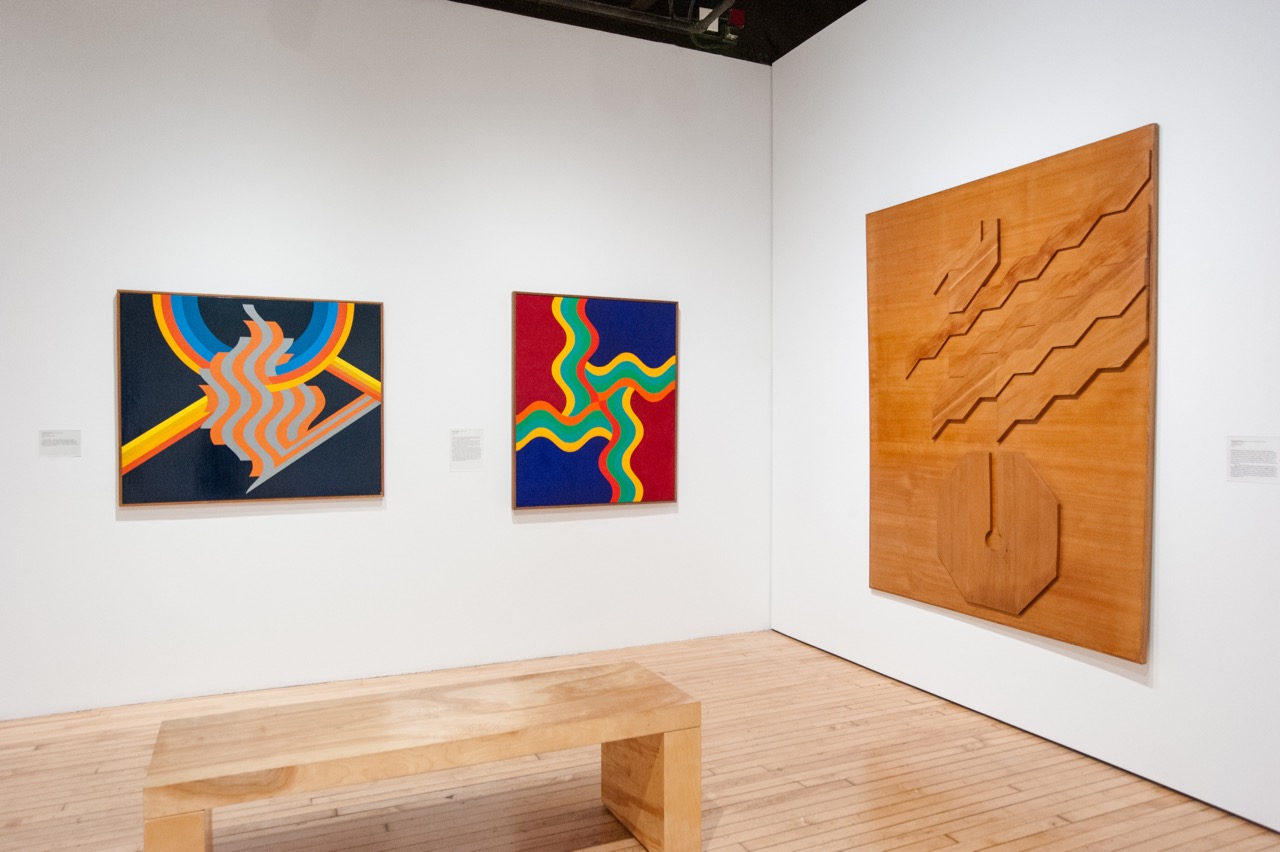 Modern and contemporary art from North Africa and West Asia has historically had a troubled reception in Europe and North America, where until the past few decades such production was often rebuffed as derivative of Western styles and not authentically “Arab” enough. The new exhibition Taking Shape: Abstraction from the Arab World, 1950s–1980s (co-curated by Suheyla Takesh of the Barjeel Art Foundation, which owns the collection that is the basis of this show, and Lynn Gumpert of NYU’s Grey Art Gallery, where it just opened) defies any such hobbled thinking with rigorous ambition. Bringing together fifty-seven artists from the region and its diaspora, Taking Shape makes an irresistible case for radically expanding our understanding of what counts as “abstract art,” the ways it developed as a form, and who has a right to its history.

This is a massively complex undertaking, starting with the very language used to circumscribe the nebulous region under review. The curators have done away with the historically violent, geographically imaginary term “Middle East,” preferring for the exhibition’s title the still-vexed category of the “Arab world.” In the exemplary catalog, Takesh adroitly makes a case for the phrase as an ethnolinguistic marker of countries in North Africa and West Asia linked in the mid- to late-twentieth century by a shared process of decolonization and the rise of Pan-Arabism. It was in response to these very processes that many of the artists on view turned to abstraction in this period, as part of a larger political program of sorting out just what a postcolonial identity might look like. Many decided to forsake the alienating Orientalism of figurative art imported to the region by the colonizer, and (in tension with artists from Europe and North America, but also often drawing from the abstract visual idioms that had long flourished in their own cultures) to forge a more liberatory mode of making and seeing. 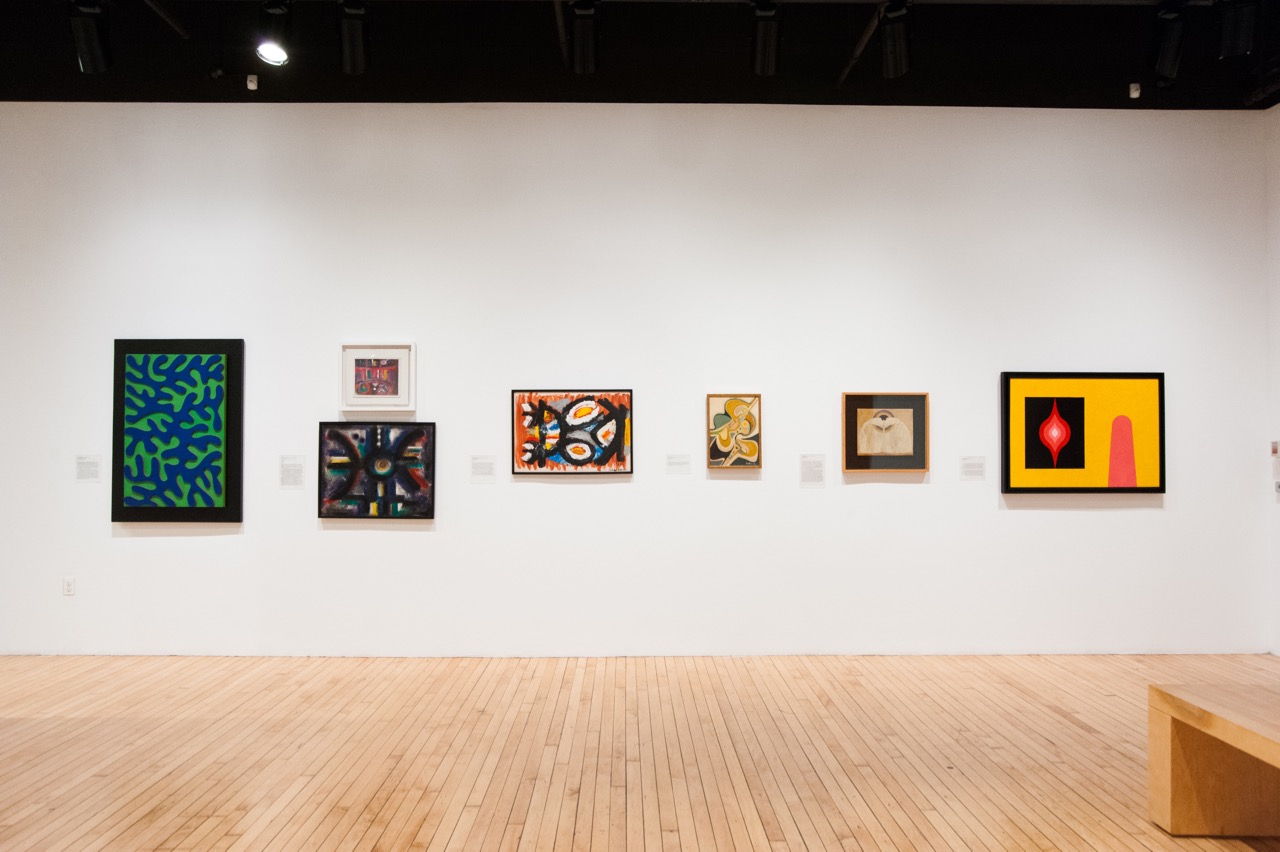 Refreshingly, as the curators map out this history and how it unfolded in different places and times, they do not silo the selected artists based on nationality; nor do they congratulate the women on the fact of their sex by segregating them like some exotic species (in her discerning catalog essay, Salwa Mikdadi, an art historian and curator who has long championed several of the artists here, points out the problems of this particularly Western predilection for the exhibition category of the “Arab woman artist”). Instead, the show appears to be arranged on the basis of formal and conceptual affinities between the artworks, allowing for a vigorous resonance of aesthetic calls and responses between the eighty-plus pieces on view (which include paintings, sculpture, and works on paper). 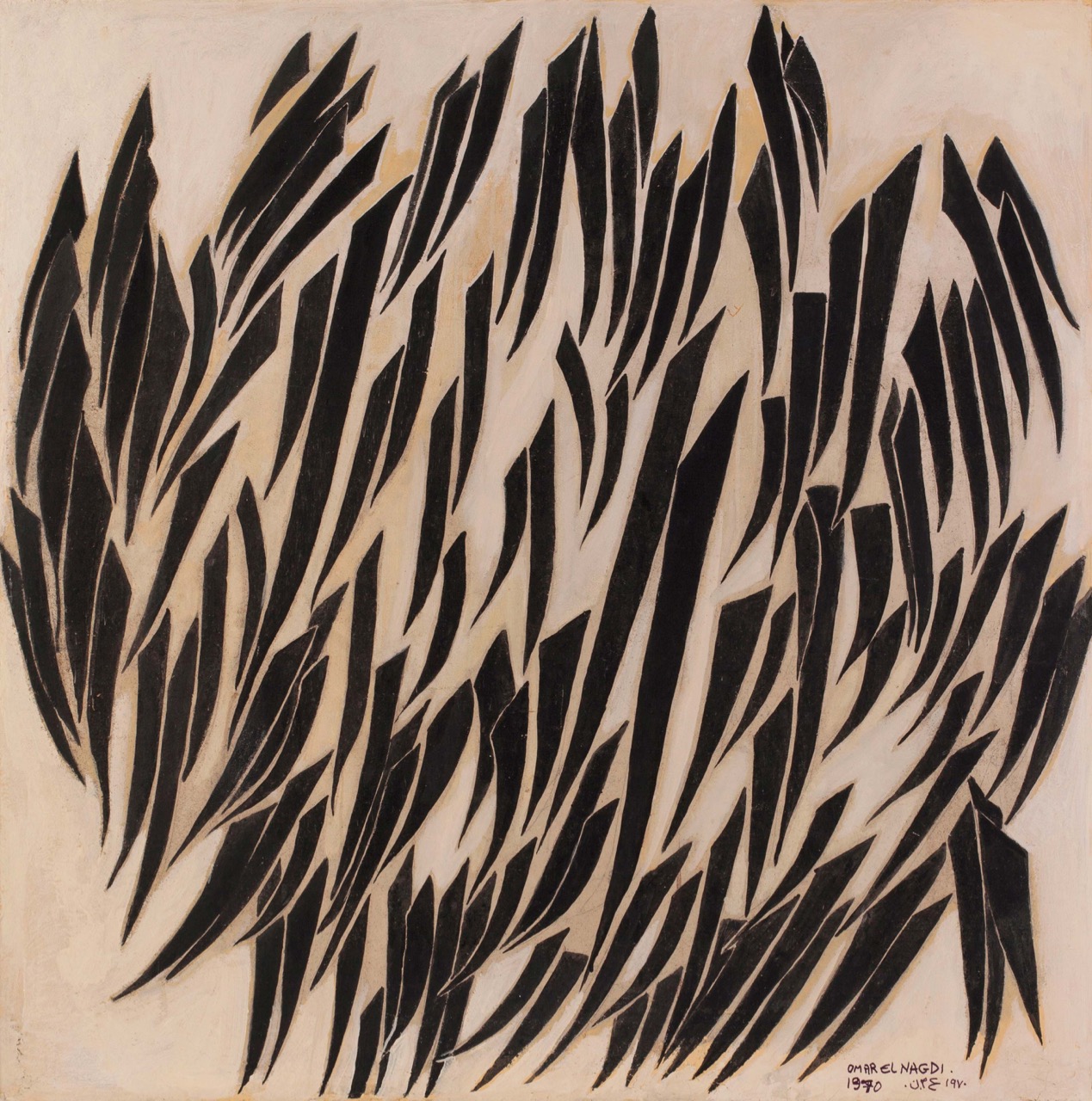 As one walks through the galleries, certain kinships emerge that clearly transcend national borders—one of the most obvious being a common interest in the Arabic alphabet as a source of abstract forms. However, the artists transposing these letters into a purely visual context had wildly varying intentions: sometimes the practice was a wholly formal aesthetic preoccupation, sometimes it was a religious one, sometimes it was a modernist extension of a local calligraphic tradition. As one might expect, the visual results could be spectacularly different. Take Egyptian artist Omar El-Nagdi’s imposing mixed-media painting, Untitled (1970), a gale of energetic black lineations calisthen​i​cally springing across their wooden support: these raven strokes are a constellation of the Arabic numeral one (wahed), which is the same character as the first letter of the Arabic alphabet, alef, which in turn is the first letter in Allah. (Nagdi’s approach was rooted in Sufi mysticism, the repetitive process of mark-making serving as a spiritual exercise in its own right.) 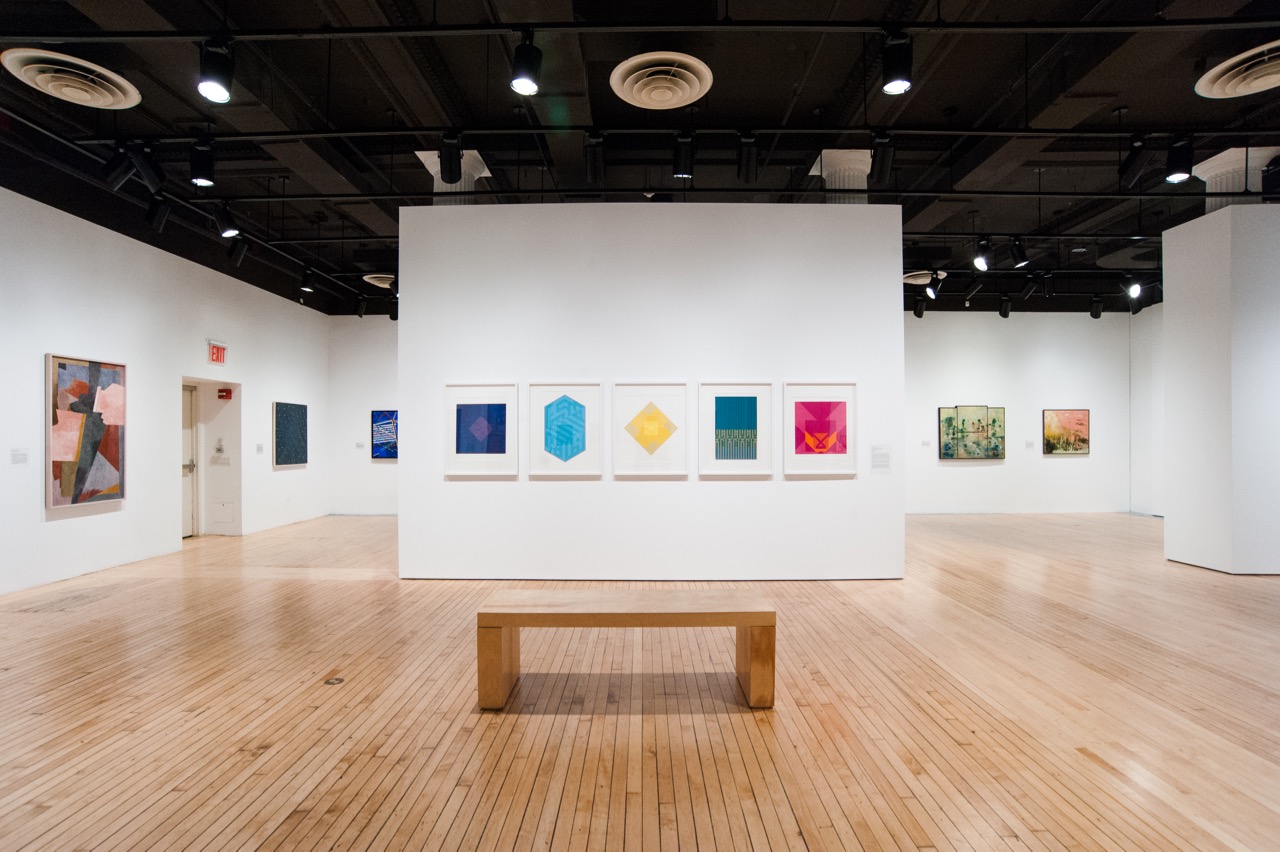 A concern for religion and the word continues in a nearby suite of five brilliant silkscreens (all 1983) also featuring Arabic letters and phrases, these by renowned Palestinian artist, poet, and scholar Kamal Boullata. But he dramatically departs from Nagdi’s austere black-and-white palette; Boullata’s prints inject flamboyant fields of concentrated color directly into the retina. And while Nagdi’s calligraphic slashes bend and stretch like living creatures, Boullata’s letters and phrases are hard-edged and angular and contained; they are tightly controlled shapes organized to a steady beat, which twist his linguistic references to Arabic and Sufi proverbs and Quranic verses almost into illegibility. 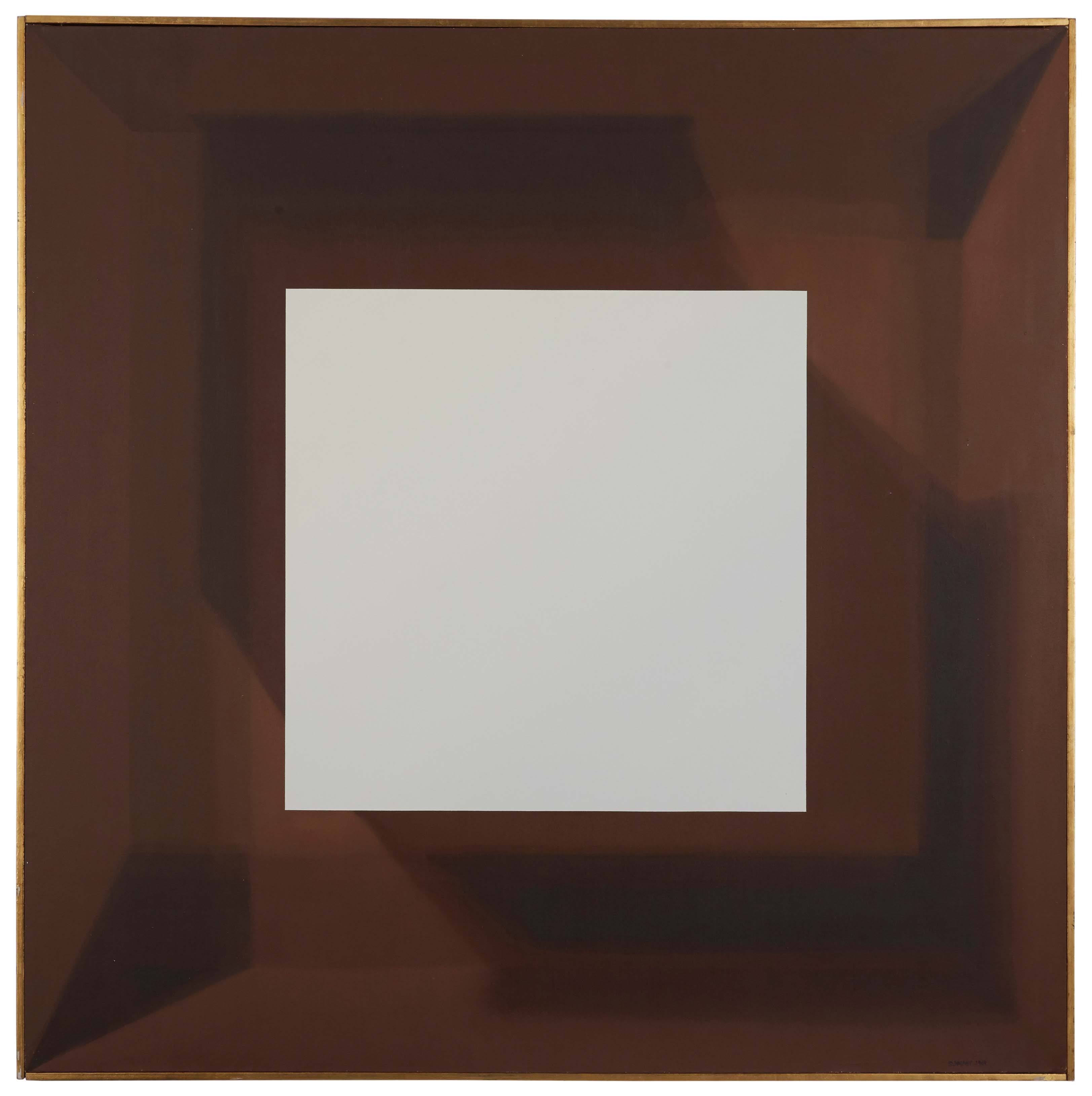 Boullata’s prints point to another tie that binds across the show: a predilection for geometric abstraction, which Palestinian artist Samia Halaby, for instance, steadfastly studied in the late 1960s. Here, her stunning and contemplative White Cube in Brown Cube (1969) toys with our depth perception, the radiant white square in the center of the canvas seeming to float toward us, impossibly casting a shadow onto the deceptively deep ground of soft amber behind it. A splendid optical game of advancing and receding planes is also at play a few feet away in Untitled (Kitty Hawk) (1980) by Beirut-born Nabil Nahas; his canvas is covered in a riot of dynamic lines and angles layered atop a galvanic cobalt blue, the whole seeming to pump with the adrenalized exhilaration of flight alluded to in the title. 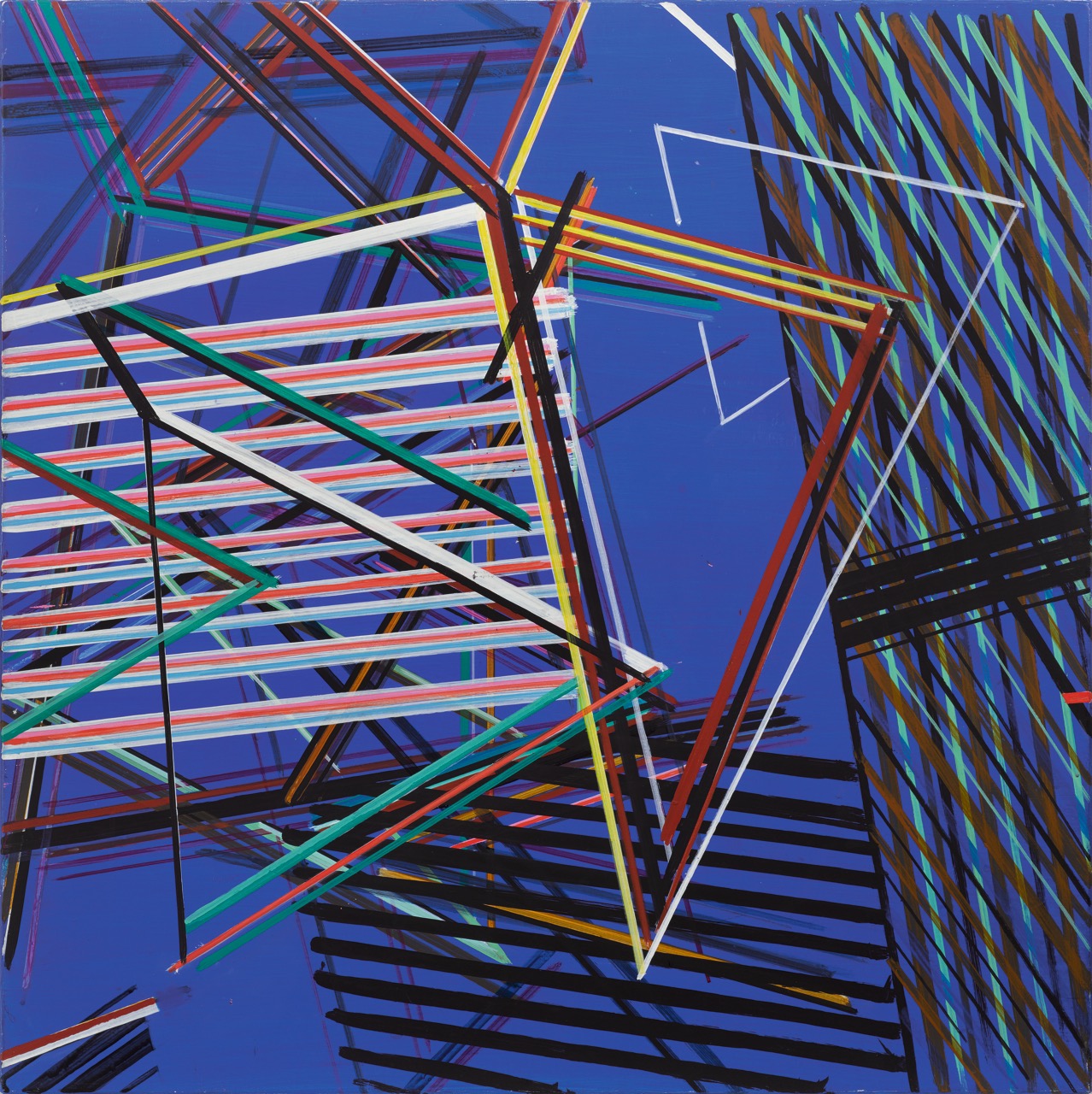 Nahas’s work, like that of several others here, is often undergirded by the symbolic principles of Islamic geometry—but he was also inclined to take inspiration from the natural world, as was the tremendously influential Lebanese artist, gallerist, and writer Helen Khal, whose Untitled (Ochre over Brown) (1968) is a honey-hued glimmer of a memory-blurred landscape. This work rhymes visually with another hung downstairs in the basement: art-world superstar Etel Adnan’s Autumn in Yosemite Valley (1963–64), in which thick blocks of luscious color distill a late-year mountainscape into a fulgent pattern of yellows, crimson, and chestnut, vivified here and there by shocks of lime green. And then these references to the physical world start to enter a fleshier realm. Continuing through the basement gallery, the viewer comes upon Huguette Caland’s iconic Bribes de Corps (1971), a gorgeous abridgment of the sweet curve of an ass, a bottom that is efficiently and nimbly alluded to by a simple erotic line that gives definition to a warm flush of rubicund paint. And next to it, two 1983 paintings by Afaf Zurayk, both titled Human Form, dissolve the soft arcs of a body into numinous, hazy rondures that seem exquisitely touchable, but also like they would melt away under the heat of your fingers. 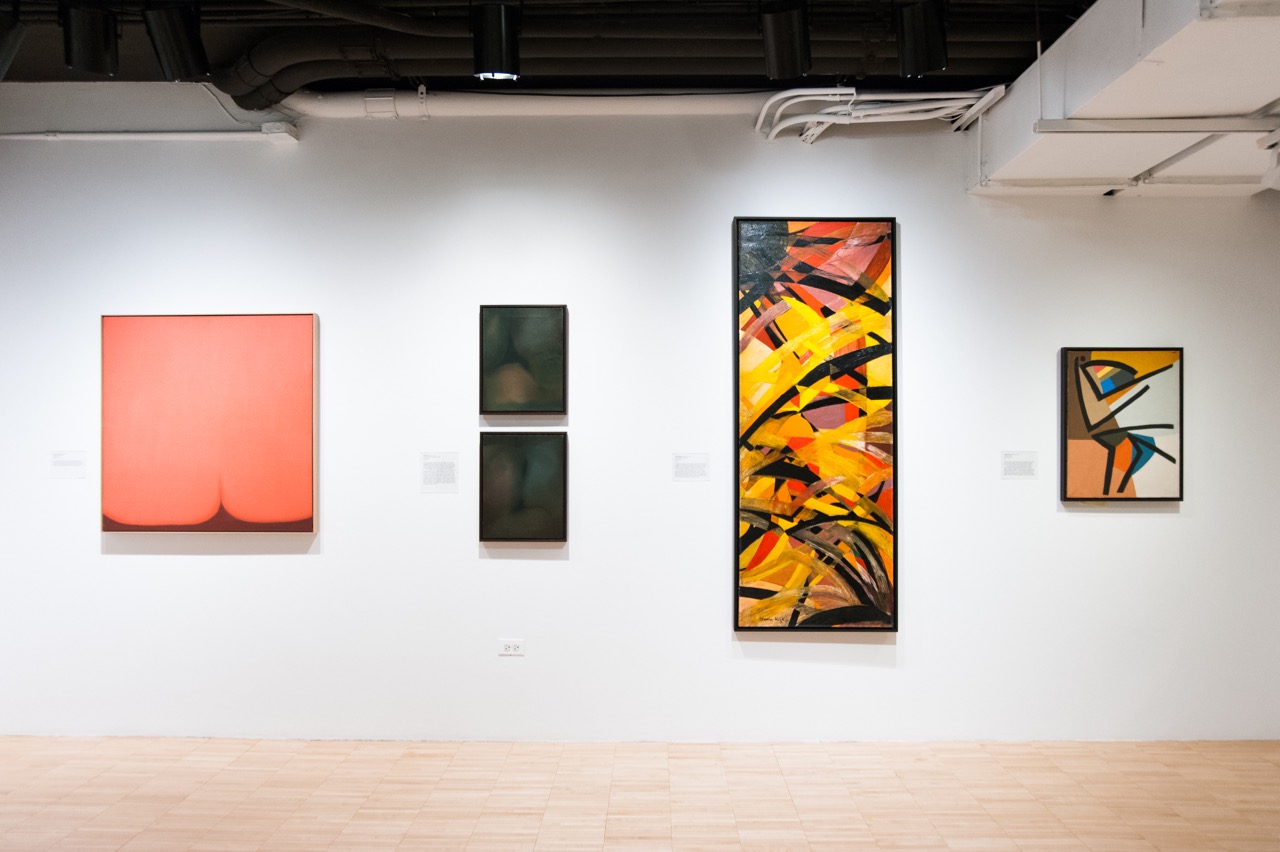 Considering all of the above, an obvious question might be whether this art could even be labeled as “abstraction,” as established by Kandinsky et al., given these artists’ non-nonobjective propensities. In the catalog, art historian Iftikhar Dadi compellingly argues for an understanding of abstraction, and of modernism itself, not as something that was born in Europe, spread to North America, and then trickled down secondhand into the periphery, but as a motley phenomenon bursting out in fits and starts across the globe, often at the same time. Abstraction as codified in Anglophone art history textbooks is, according to Dadi, just one type of modern art, not a definitive form; and while the artists in Taking Shape were aware of the history of that abstraction and sometimes in dialogue with it, the forms of abstraction they pioneered constitute another and equally valid kind of modernity. Taking Shape, then, in addition to being an exhibition of joyful beauty and rousing ideas, is a fine instrument for dealing some delightful blows to The Canon, an institution now being jubilantly hammered upon from many sides, and which is revealing some very deep cracks indeed.