In vivid observations of daily life, a Dutch polymath revels in and reveals the limits of subjectivity. 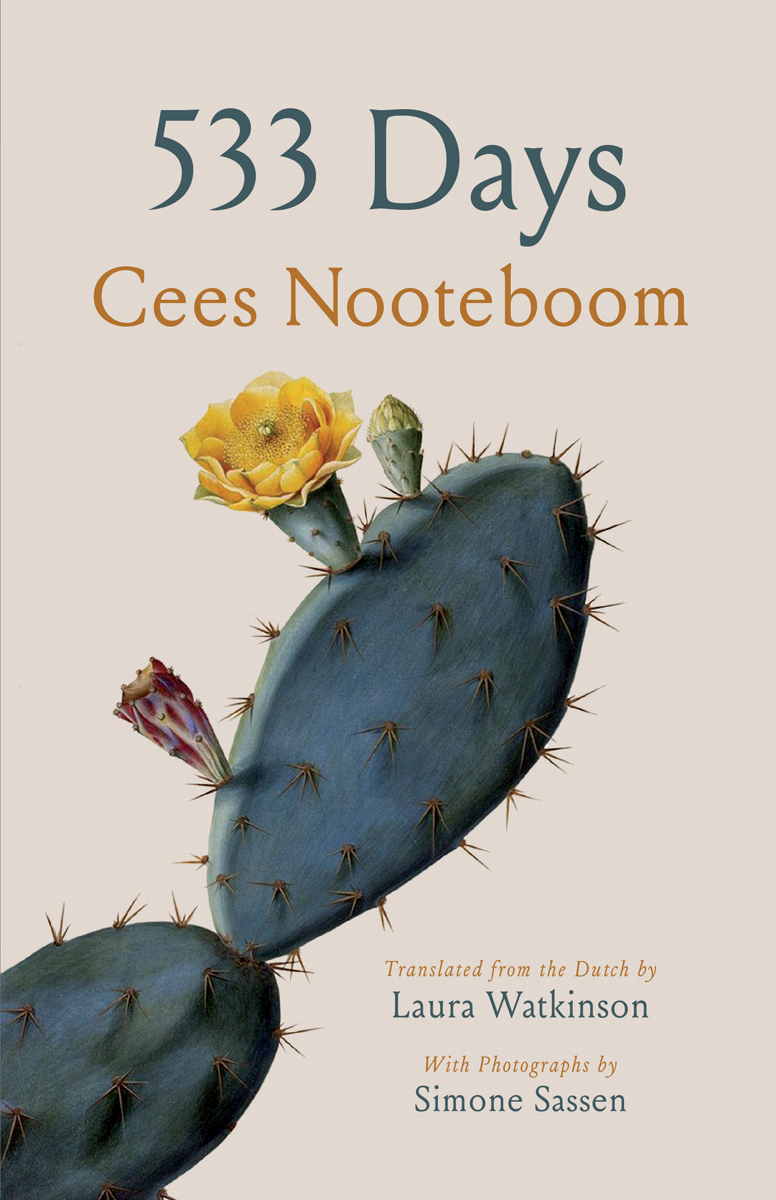 “I never meant for this to become a diary, I wanted to go inwards, and to stop going outwards,” Cees Nooteboom acknowledges near the end of his remarkable 533 Days. “I had been out there for so long, and so often. The feeling that I have been removed from it, my time.” He’s addressing longevity—he was born in Holland in 1933—but also geography, and the rigors of a public life.

Nooteboom is a polymath: travel writer, poet, novelist, and author of one of my favorite essays about Los Angeles. His first book, the novel Philip and the Others, appeared in 1955; in the nearly seven decades since, he has published more than fifty titles and received an array of European prizes. If he is lesser known in the United States, it may be, in part, because of our resistance to translation (“English,” he sniffs, “the world language into which the least is translated, a combination of arrogance and provincialism”), but also because of his resistance to being classified. 533 Days represents a case in point. “It is even doubtful whether this is in fact a diary,” Nooteboom suggests, “perhaps it is more like a book of days.” A book of days, yes, or as he prefers to call it, a “diario novo,” less “about committing my soul to paper or investigating my conscience” than evoking consciousness in all its elusive fluidity.

For Nooteboom, this means first a reckoning with daily life; in that sense, 533 Days is both the book’s title and a reference to its form. Taking place across seventeen months and moving between the Spanish island of Menorca, where the author spends his summers, and the house in southern Germany where he lives in winter, the text opens quietly, impressionistically, with the cacti in his Menorca garden, which he considers to be old friends. “How did Humboldt do it?” Nooteboom wonders. “How do you describe an object that is green[?] . . . Humboldt naturally considered characteristics, gender, reproductive capabilities, relationships. I do not have the tools to do so, all I have is my prima vista, and the poverty of my language.”

These may seem like idle observations, but they establish the thematic movement of the book. Nooteboom reveals his subjectivity, which begins, as it must, with the vagaries of language (he reads in Dutch, French, German, English, and Spanish) and the subtle ways that all these varying vernaculars do and do not overlap. If language determines perception—and, as such, reality—it is also insufficient, keeping us at a distance from what we see and feel. “I live in ignorance,” Nooteboom admits. “The cactus books are confusing, bandying about various Latin and German names for their hairy cone forms . . . I live with their enigmas. . . . They are simply here.”

The tension Nooteboom is describing—between thought and observation, say, or erudition and a kind of willful not knowing—sits at the center of his book. On the one hand, he can’t help citing the sources he has gathered from a lifetime of reading. “You can perhaps cast off the ballast of art,” he reflects, “but not so easily the ballast of language, since you cannot abolish the language you use to write.” On the other, he understands this is not enough. To some extent, that’s a reaction to aging and the proximity of death. Nooteboom establishes this early in 533 Days, when he invokes Elias Canetti, who regarded life “as a conspiracy against humans, dreamt up by God, a gift with a death sentence thrown in.”

Death, in other words, is for Canetti an enemy to be contested. The sentiment is one with which I’ve long had an abiding sympathy: rage, rage, in Dylan Thomas’s formulation, against the dying of the light. All the same, if I’m being honest, I—not unlike Nooteboom—have come to align myself more closely with Beckett, another of the author’s favorites, or Borges: “We are,” the latter once pointed out, “already the oblivion that we shall be.”

Throughout 533 Days, Nooteboom remains aware of these apparent contradictions, and of himself as a being in time and space. Yet even as he does so, he explores a corollary notion: that all the moments of our lives coexist within us—at least until we disappear. That’s not to say he’s in denial. “ ‘Yes, I know,’ ” he writes, quoting Mallarmé, “ ‘we are nothing but empty forms of matter and yet sublime because we have invented God and our souls.’ ” Could there be a clearer explication of the divide between meaning and meaninglessness, which ultimately widens into an unbridgeable abyss? “If the universe is the answer, what is the question?” physicist Leon Lederman asked of the Higgs boson, or God particle—a mystery, Nooteboom concedes, “greater than I can comprehend.”

Such questions are consoling, because of their clarity but also because they make 533 Days a living thing. “It was once given to me, and I do not remember by whom,” Nooteboom comments on a yucca in his Menorca garden, before he backtracks: “I shall leave that sentence there, even though it is no longer true.” The plant, he had forgotten, was a gift from his wife, Simone Sassen (who took the photographs that punctuate the text), but if “forgetting involves shame,” then “leaving the sentence there is a form of penance.” It’s a vivid moment, a vivid metaphor, recalling to us the conditionality of memory, of literature and life.

Nooteboom moves in these pages from nature to literature to science, ending with a series of reflections on the Voyager space probes, which have now left the solar system for interstellar space. Their obsolescence—due to the void they traverse as much as to their late 1970s technology—becomes another metaphor, for the limits of what is possible to know. “And so the Voyagers,” he points out, “continue with their eyes closed, racing through the universe as blind as bats.” The same might well be said of us. And yet, 533 Days insists, there is solace in this also, what Borges once described as an “elation” at all the countless questions that we will never answer, all the endless mysteries that we cannot resolve.