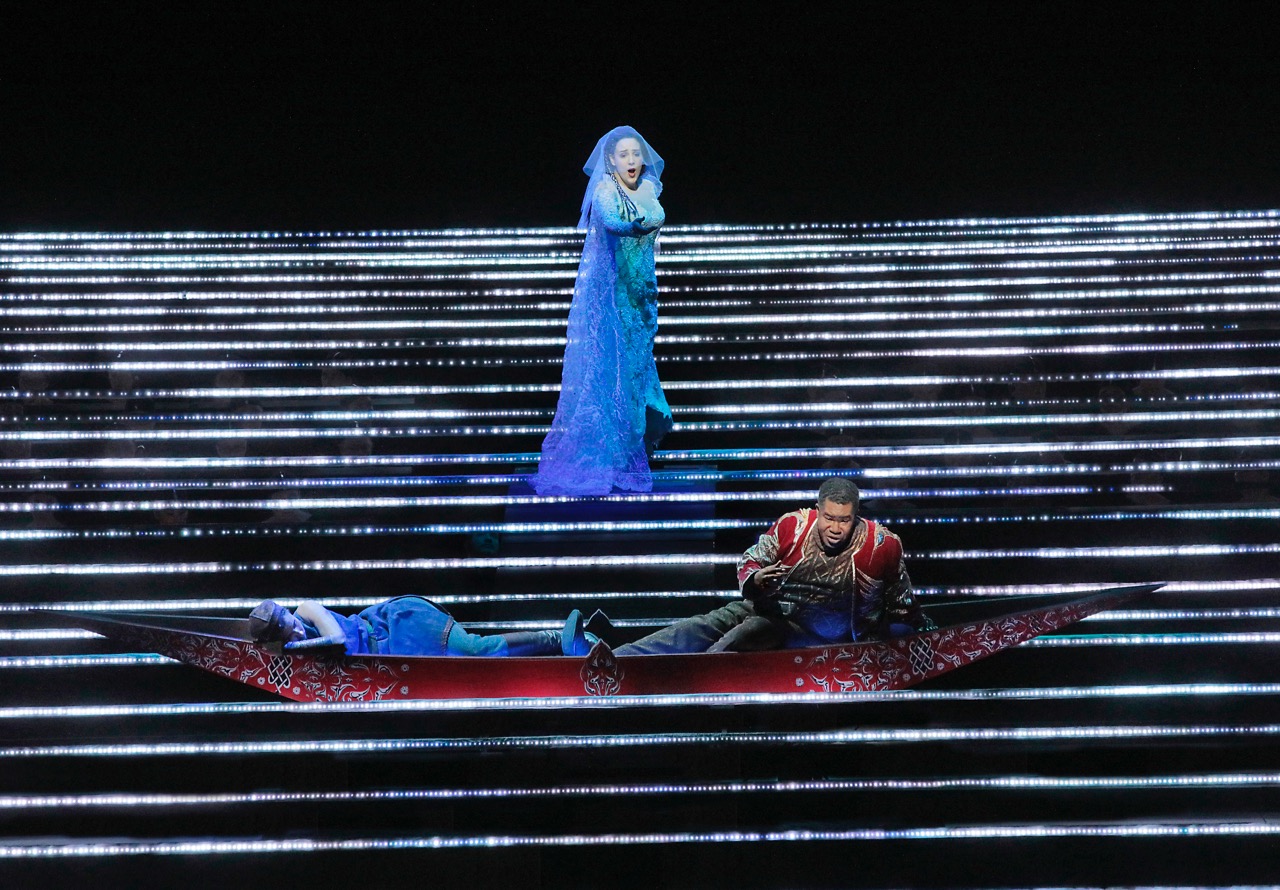 Opera culture thrives on debate: about voices, naturally, but also composition, dramatic staging, the ideal length of intermissions. (So, everything.) Though one broadly accepted opinion about the Metropolitan Opera, in the era of Peter Gelb’s leadership, is that the house’s feel for contemporary music has improved. Over the last decade, we’ve seen stagings of important late-twentieth-century works—like Philip Glass’s Satyagraha and John Adams’s first grand operas—as well as the New York premieres of Thomas Adès’s The Tempest and Nico Muhly’s Two Boys.

These new Met productions can be hit-and-miss. But the contemporary-music antenna is picking up better signals, especially when compared to the days when John Corigliano’s The Ghosts of Versailles was nominated as the season’s exercise in contemporaneity. (That 1991 work was capably constructed, though its self-conscious pastiche of vintage operatic styles was hardly path breaking.) Kaija Saariaho’s operatic debut, L’Amour de Loin (Love from Afar), first performed in 2000, is another strong, modern addition to the house’s repertoire. And its selection also happens to break a shameful all-male-composer streak at the Met that reaches back to 1903.

Often identified with the school of “spectralism,” Saariaho’s music achieves its dreamy, otherworldly quality through an ingenious mix of consonance, microtonal acidity, subtle electronic manipulation, and surprising shifts of gear. After a long scene or movement in which her music has established glacial, slow-moving contours, some dynamic rupture will awe you with a blindsiding bit of violence that’s also melodically memorable. As a result, this Finnish-born artist’s chamber pieces and orchestral opuses have been much admired in “new music” circles for over a decade. (In a 2006 column, The New Yorker’s Alex Ross directly petitioned Gelb for a local staging of L’Amour.) Still, the Met’s embrace of Saariaho’s celebrated work represents something of a gamble, as it features only three main characters, as well as a philosophical, deliberate narrative.

Here’s that story: a twelfth-century French prince/troubadour named Jaufré idles in his castle, pining in the abstract for a woman who boasts a wealth of traits and contains no flaws (e.g., “beautiful without the arrogance of beauty”). A chorus of companions encourages him to get real, and to rejoin their world. But when an androgynous Pilgrim informs Jaufré that just such a woman, Clémence, has been spotted during the Pilgrim’s recent travels to the remote city of Tripoli, the troubadour’s obsession deepens.

Later, during another visit to Tripoli, the Pilgrim tells Clémence all about Jaufré—even singing one of the songs Jaufré has written in her honor. Clémence is curious, but also skeptical about whether she actually deserves the affection. After the envoy’s return to France, Jaufré at last sets sail for Tripoli with the Pilgrim. But he takes ill during the journey and dies in Clémence’s arms after the briefest of unions. Clémence swears off romantic pursuits while bidding Jaufré adieu—and then turns obliquely theological when addressing God as her own new, distant love. Cue curtain. 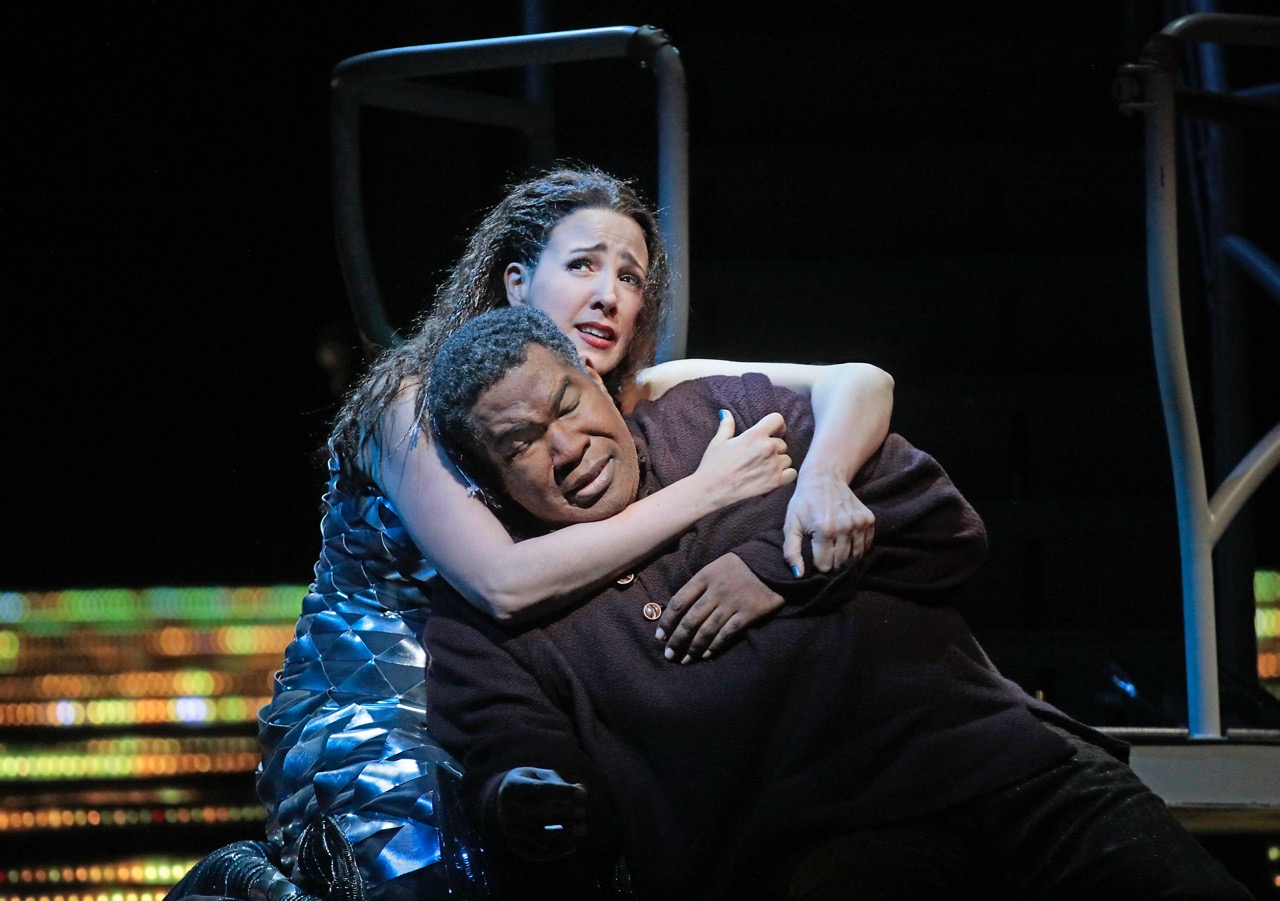 Performances of the opera directed by Peter Sellars went heavy on the work’s sense of torment. (A 2004 production of Sellars’s staging is available on DVD, from Deutsche Grammophon.) In that version, bass-baritone Gerald Finley looked and sounded persistently haunted in the role of Jaufré. And conductor Esa-Pekka Salonen, a onetime schoolmate of Saariaho’s, brought plenty of grit to the piercing qualities of the score.

The Met’s new version, steered by director Robert Lepage, takes a noticeably cooler approach to the narrative. Lepage’s stage design is constructed from 28,000 computer-controlled LED lights, which permit dazzling shifts of color. Draped across the Met’s cavernous stage in an array of patterns, these mutable strings of light can suggest calm seas or stormy swirls. But the digital nature of their glorious iridescence is also foregrounded. The light show is seductive but clearly artificial, like the over-idealized quality of Jaufré’s love for Clémence.

The musicians have keenly observed the implications of Lepage’s stage design, offering performances that are deeply felt but also a touch surreal. Bass-baritone Eric Owens’s portrayal of Jaufré cultivated a near-improbable naivety on opening night. Susanna Phillips gave Clémence a more gimlet-eyed sensibility than Dawn Upshaw, the soprano who debuted the role, in Salzburg. By the opera’s end, Phillips’s vision of the character allowed her an expressive freedom of timbre—sometimes verging on a shout—that provided a thrilling contrast with her otherwise lustrous singing. And Tamara Mumford’s dark-hued mezzo voice hinted at the ironies in the libretto (written by the French-Lebanese novelist Amin Maalouf). When lathering up Jaufré’s interest, the Pilgrim can be seen as a manipulator—a quality Mumford accentuates.

Though it was conductor Susanna Mälkki, in her debut at the Met, who made the greatest impression. While she gloried in Saariaho’s thunderous textures, her approach to the score was often disarmingly gentle. I heard inner details in the orchestra with greater clarity than on past recordings. And when Mälkki traversed Saariaho’s harmonically tricky climaxes, the score’s dramatic sweep came across with a fresh sense of alarm. 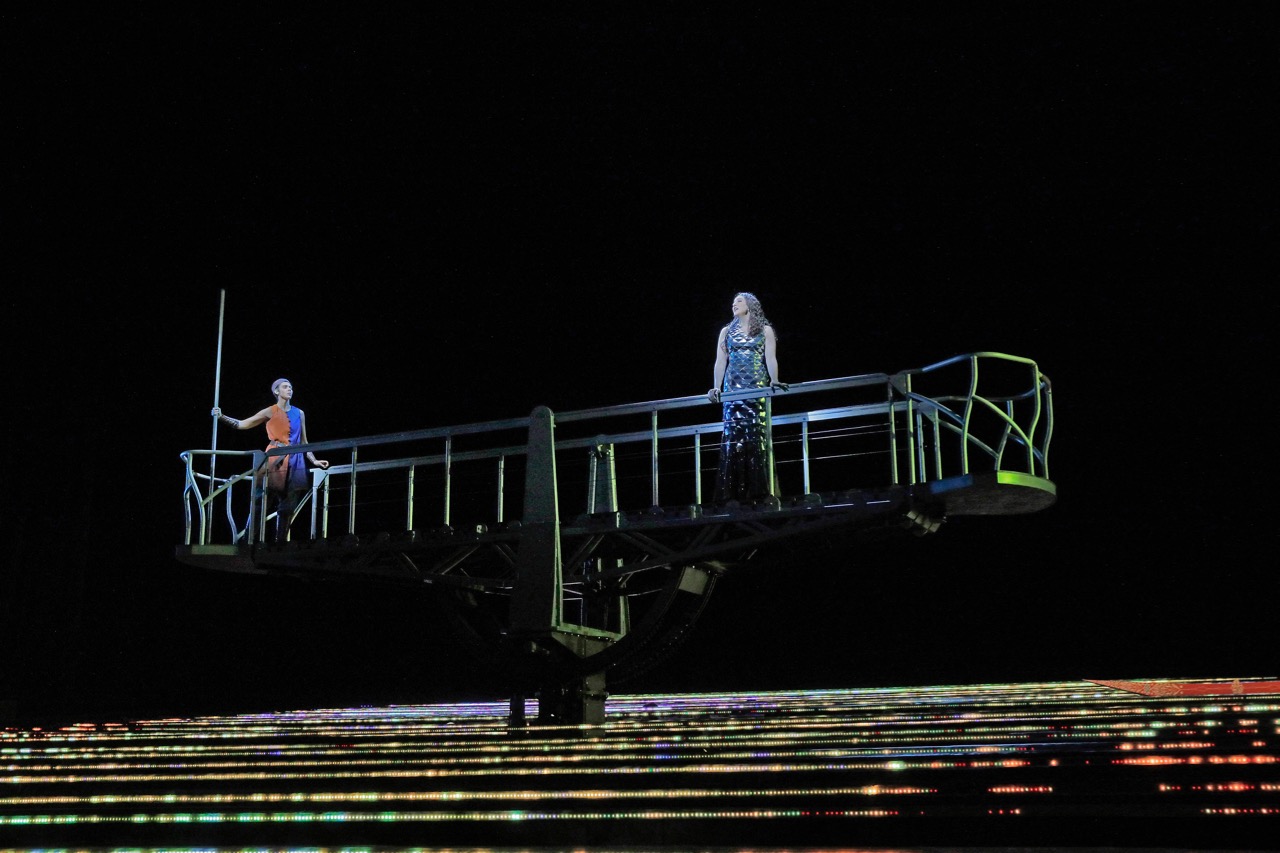 The biggest drawback of the production stemmed from the singers’ restricted ability to move about—a limitation all but dictated by the narrow, horizontal strips of ground between the strings of LED lights. For most of the evening, the characters were hoisted and twirled around, above that field of lights, on a large, swiveling machine that looked like a cross between a ship’s gangway and some platform on a movie spaceship. In Owens’s first scenes, he seemed a bit less powerful than I remembered him from past engagements, and I feared that Lepage’s intricate staging was cramping the singer’s style. Fortunately, before the first act was over, his performance had stabilized.

This production represents a great improvement over Lepage’s previous engagements at the Met—including his roundly panned Ring cycle, and a fair-enough presentation of Adès’s Tempest. Much as I love the Sellars-directed DVD edition of this opera, Lepage’s vision of L’Amour is one I will also want to see again. (Its broadcast to movie theaters as part of the Met’s “Live in HD” series will take place on December 10, and will repeat on the twenty-first.)

Despite the fact that the operatic canon changes slowly (too slowly), it really shouldn’t be another 113 years before a woman has a Met Opera premiere. Recent works for the stage by Unsuk Chin and Missy Mazzoli indicate that they’re among those composers ready for a Met commission. And Saariaho’s second major opera, the wartime drama Adriana Mater, has yet to play in New York. There was never any rigorous debate to be had about this, but the time for demurrals and excuses has now been exhausted: a production as impressive at this one shows that you simply can’t tell the story of contemporary music without the work of women artists.