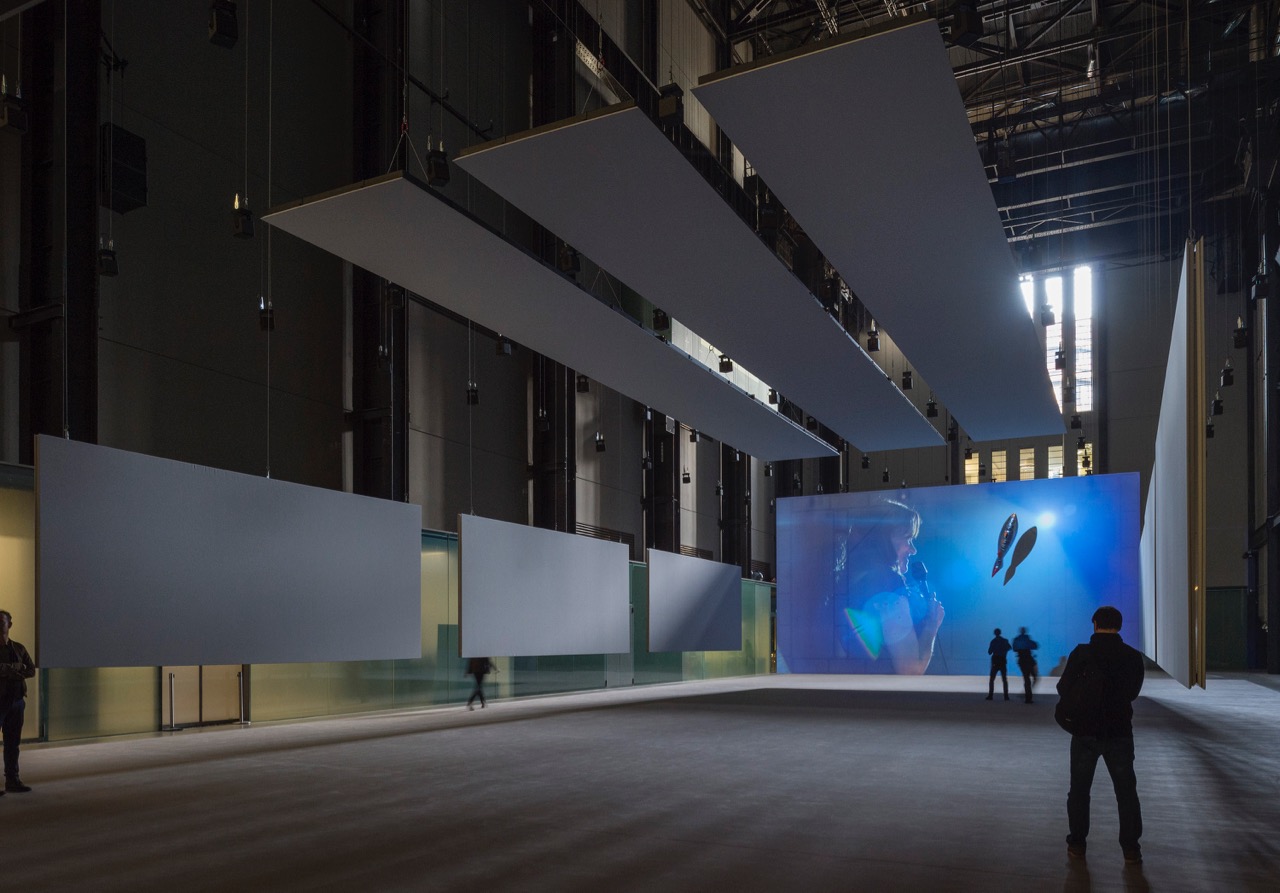 Philippe Parreno’s Anywhen—the Tate Modern’s latest commission for its Turbine Hall—is a multimedia cinematic installation that underscores the French artist’s simultaneous rejection of the gallery qua “white cube” and theater qua “black box.” In their stead, Parreno offers a distinctive conception of the exhibition space as a temporal environment, which he has transformed—to borrow the artist’s words—into a “half-organic and half-mechanic and half-digital kind of machine.”

A massive open passage that connects the back and front galleries of the Tate Modern, the Turbine Hall best suits the not-so-newly minted art category of “event.” The work presented here over the past sixteen years has ranged from a dramatic crack cutting through the long expanse of the concrete floor (Doris Salcedo) to interactive slides that turn the space into an improvised amusement park (Carsten Höller). Whatever occupies the Turbine Hall must cope with its immense scale, as well as its unconventional two-level structure. Parreno is equipped to deal with this kind of challenge, as evidenced by recent projects that deftly choreograph elusive objects and fleeting images, immersive installations that negotiate the tension between distraction and attention. These environments aim to create temporary communities, following Parreno’s cherished premise that an exhibition is a negotiation of form—understood in its broadest sense—that takes place in a public space.

Upon entering the core of the installation, we are invited to lay down, sit, or wander around a central carpeted area where people gather to interact with one another and the elements of the work. The most obvious element being a series of large white panels that run alongside and above an enormous screen located at one end of the space. Both panels and screen move up and down at different rhythms, sometimes coalescing into an ad-hoc screening room that forms beneath six rows of speakers suspended from the ceiling. An eighteen-minute film featuring ventriloquist Nina Conti is periodically projected. At other times, an urban soundscape suffuses the hall, and pulsating luminous panels on the space’s upper level produce an overpowering alternation of light and shadow. A gigantic theater marquee lit with bulbs that turn on and off is also situated there, as if introducing the whole show. Parreno’s signature helium-filled fish balloons flow around, moving up and down, getting stuck along the walls of the building or in dark corners. On the no-school day that I was there, children clung to the few visible balloons, ran and rolled on the carpet, and played hide-and-seek around the screen. 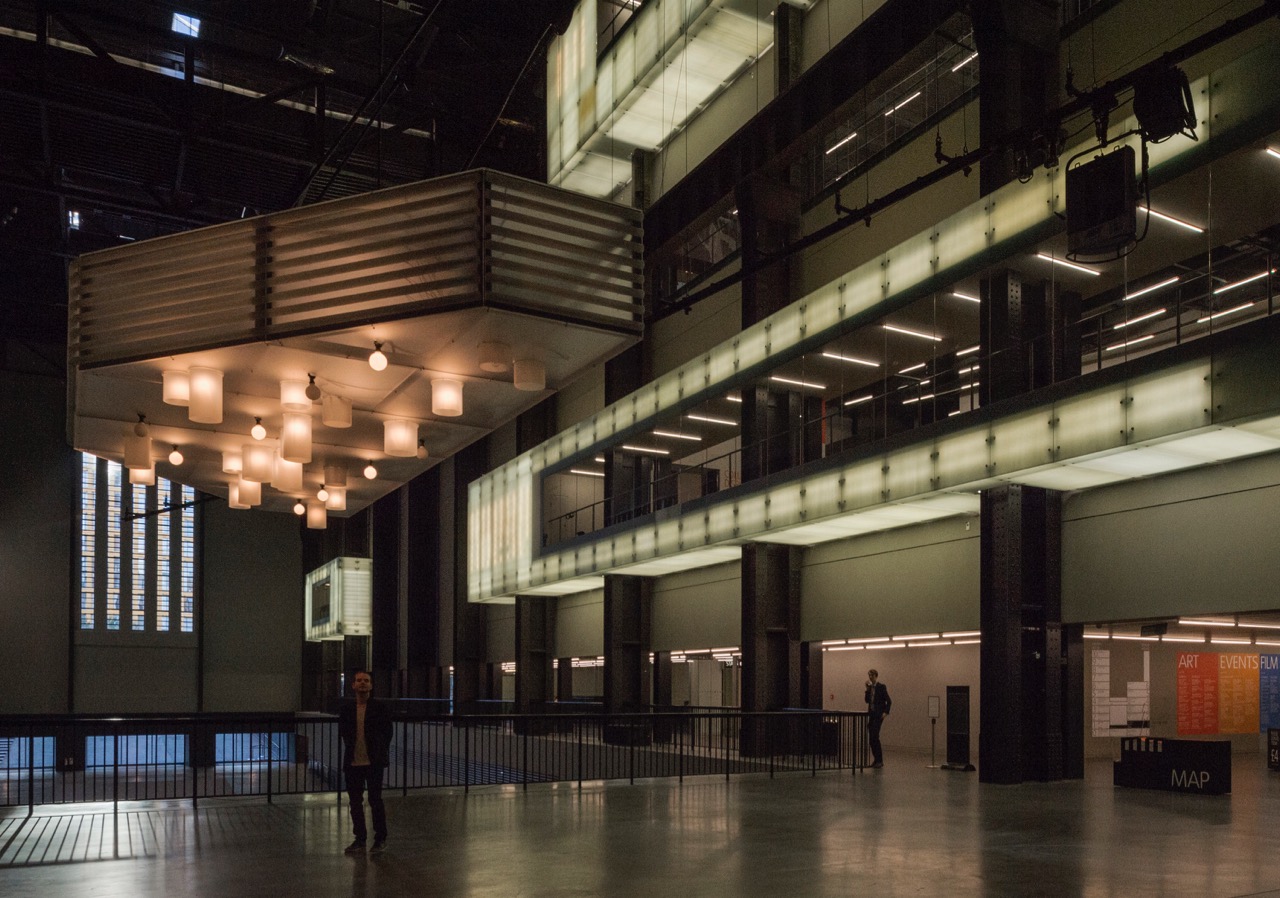 Parreno’s interest in undermining traditional notions of authorship and agency is echoed in his preoccupation with automatons, ghosts, dolls, avatars, and ventriloquists—such as the one we see in Anywhen. Additionally, a penchant for collaboration with artists and, more recently, biologists, sound engineers, filmmakers, and graphic designers defines Parreno’s idiosyncratic synthesis of the arts.

In a small, barely visible room adjacent to the main space, a colony of microorganisms—a species of yeast, to be exact—dictates how the visible components of the exhibition appear and disappear. Data on how these tiny beings are reacting to their surroundings (for example, to changing humidity levels) is fed into a computer algorithm that generates the spectacle’s unpredictable script. Parreno’s use of time codes—the temporal structures, usually digitally produced, that orchestrate the elements in his installations—was systematically addressed in a series of survey-like exhibitions realized between 2002 and 2003. This strategy, in which unseen signals dictate the movements of Parreno’s work, resonates with the way statistical patterns that emerge from data collection increasingly define our everyday lives.

In Parreno’s practice, communicative clarity is abandoned in favor of technological opacity. This is accomplished through a dedicated reflection on the logic of the exhibition, which here specifically nods to an effort sixty years ago to interrogate the nature of museum display and audience interaction. I am referring to British artist Richard Hamilton’s an Exhibit, produced in collaboration with artist Victor Pasmore and critic Lawrence Alloway (all members of the Independent Group) for the legendary Institute of Contemporary Arts London in 1957. an Exhibit was defined as “a game, an artwork, an environment.” It mostly consisted of variously sized Perspex panels placed on the floor and hung from the ceiling at different levels—a bit like Parreno’s monumental floating screens. But the effect was labyrinthine and the scale, human. Like Anywhen, an Exhibit used chance interactions to critique predictable exhibition structures. Parreno echoes, too, the Independent Group’s unprecedented blurring of disciplinary boundaries and deep engagement with visual culture at large. (Its members included architects, designers, photographers, and artists interested in science, technology, popular culture, and product design.) This interdisciplinarity foregrounds Parreno’s dismantling of the categories of artwork, artist, exhibition, and audience. The title Anywhen alludes to the temporal and spatial instability unleashed by the moving panels, the intermittent rushes of sound and light, and the comings and goings of people whose shadows intersect with the images of the film; it suggests that reality under the auspices of digital images and signals is unhinged. But Parreno’s technologically controlled environments redeploy the technological and digital interfaces that connect humans in automated activities that aim at maximum profit, efficiency, and utility. Encouraging aimless wandering and distracted viewing, his installation subverts notions of functionality to which economic and political systems aspire.

Like others in the areas of philosophy, art, and culture in general, Parreno is concerned with what Italian philosopher Franco Berardi has called the “deepening penetration of digital technology into the molecular fabric of subjectivity.” In the film, his ventriloquist’s split self—her voice uncannily separated from her body—ruminates on words such as “communication,” “bits of data,” the “quasi-living,” and the “machine.” Her whispering voice lingers over the image of a cuttlefish whose skin changes as it interacts with its surroundings—sending signals as we do when we tap the surface of those screens that have become our second skins. In this unsettling space, we find affect despite or because, as the film concludes: “there is no way to stop me, the upcoming tragedy.” 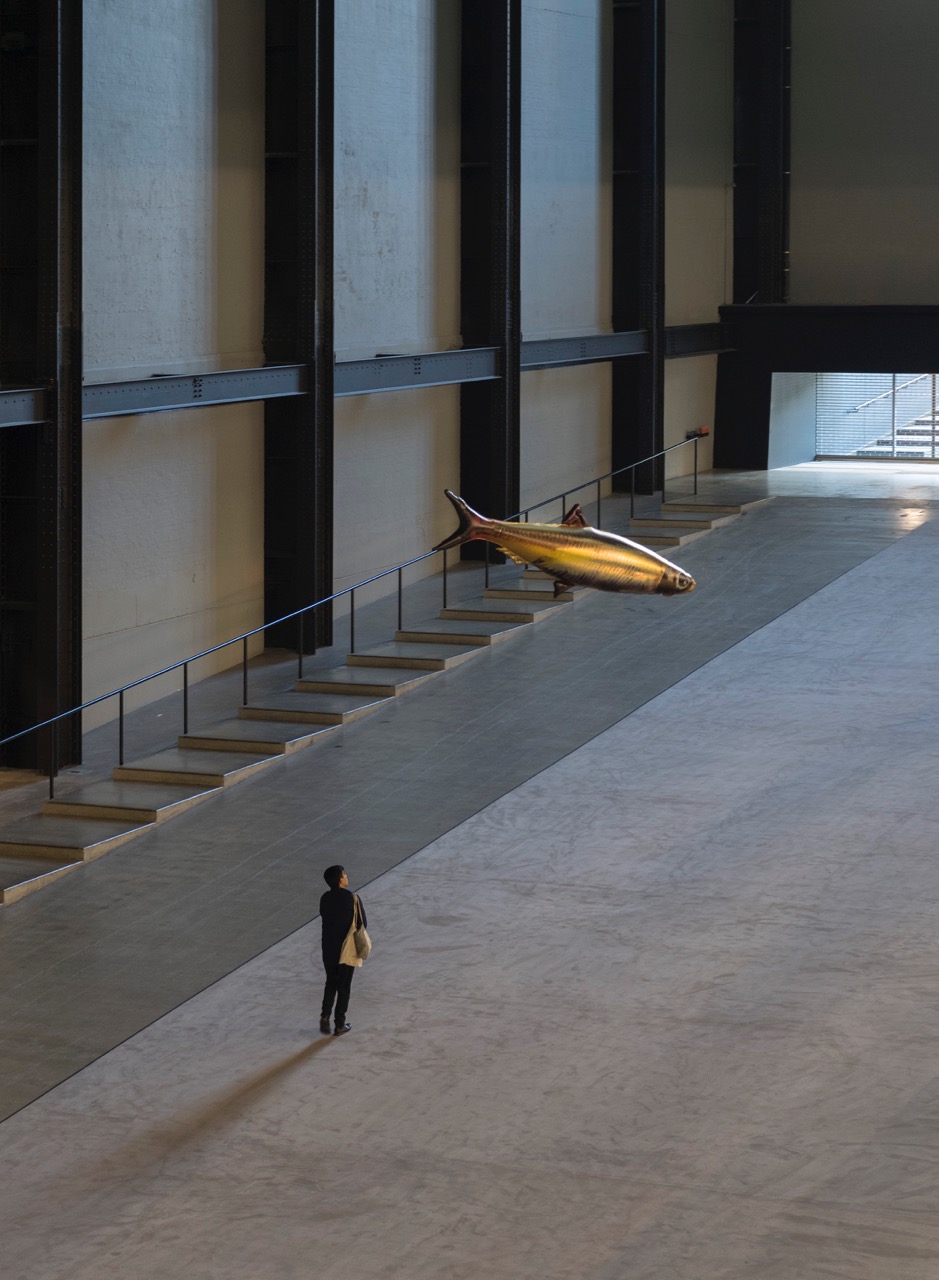 Monica Amor is a professor of modern and contemporary art at the Maryland Institute College of Art. She writes and lectures regularly on postwar and contemporary art with special attention to interdisciplinary practices and the dynamics of global modernity. She is the author of Theories of the Nonobject: Argentina, Brazil, Venezuela, 1944-1969 (University of California Press, 2016) and is currently writing on Philippe Parreno’s work. Her next book project is entitled Gego: Weaving the Space In-Between.