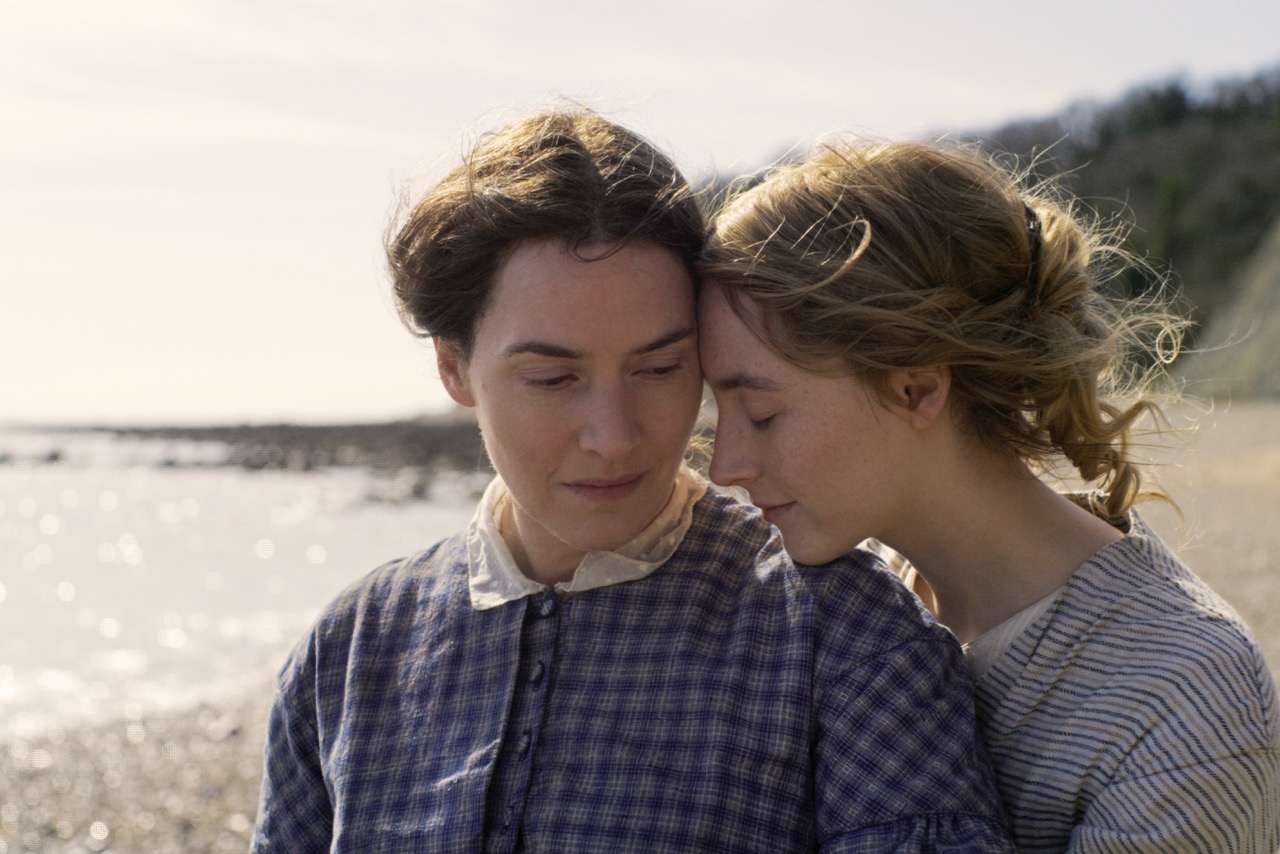 Ammonite, written and directed by Francis Lee, available to rent on all major digital platforms

The second feature by writer-director Francis Lee, Ammonite centers on Mary Anning (Kate Winslet), a real-life fossil collector and pioneering paleontologist born in 1799. Speculating on her erotic affinities, Lee concocts a romance between the never-married Anning and an aristocratic (and fictional) young bride, Charlotte (Saoirse Ronan), who has been deposited by her overbearing husband, Roderick (James McArdle), at the coastline town to convalesce from melancholia following a stillbirth. Age and social bracket may distinguish Mary and Charlotte, but, as women of the nineteenth century, they are both second-class citizens. Ammonite never tires of reminding viewers of this exceedingly obvious point; the movie’s outrage over this injustice is as blunt as its sex scenes, which have the estranging effect of being explicit and opaque at once.

Ammonite continues some of the themes explored in Lee’s debut feature, God’s Own Country (2017), particularly same-sex love amid spectacular, unyielding English terrain. Taking place in present-day Yorkshire, the earlier film tracks the romance between Johnny (Josh O’Connor)—a brutish, binge-drinking twentysomething responsible for running the family sheep farm—and Gheorghe (Alec Secăreanu), a gentle Romanian migrant worker hired to help during lambing season. (Lee shot the movie quite close to the pig farm where he grew up.) Occasionally calling attention to real-world ills, such as the xenophobia Gheorghe encounters from the locals, God’s Own Country unfolds leisurely, paying close attention to the intricate dynamics of falling for someone.

Those unhurried rhythms are nowhere in evidence in Ammonite, a film impatient to highlight the grievous gender inequality of the era. The dudgeon is announced from the start, as the movie opens on a begrimed woman on all fours, scrubbing the parquet floors of the British Museum. A black-coated functionary barks at her to move so that two men carrying a large fossilized skeleton can trudge right through the spot she’s just cleaned. The administrator examines the tag attached to the relic—“Sea Lizard found by Miss Mary Manning Lyme Regis”—with a dismissive “hmph” and replaces it with official signage: “Ichthyosaurus, Lyme Regis, presented by H. Hoste Henley, Esq.” 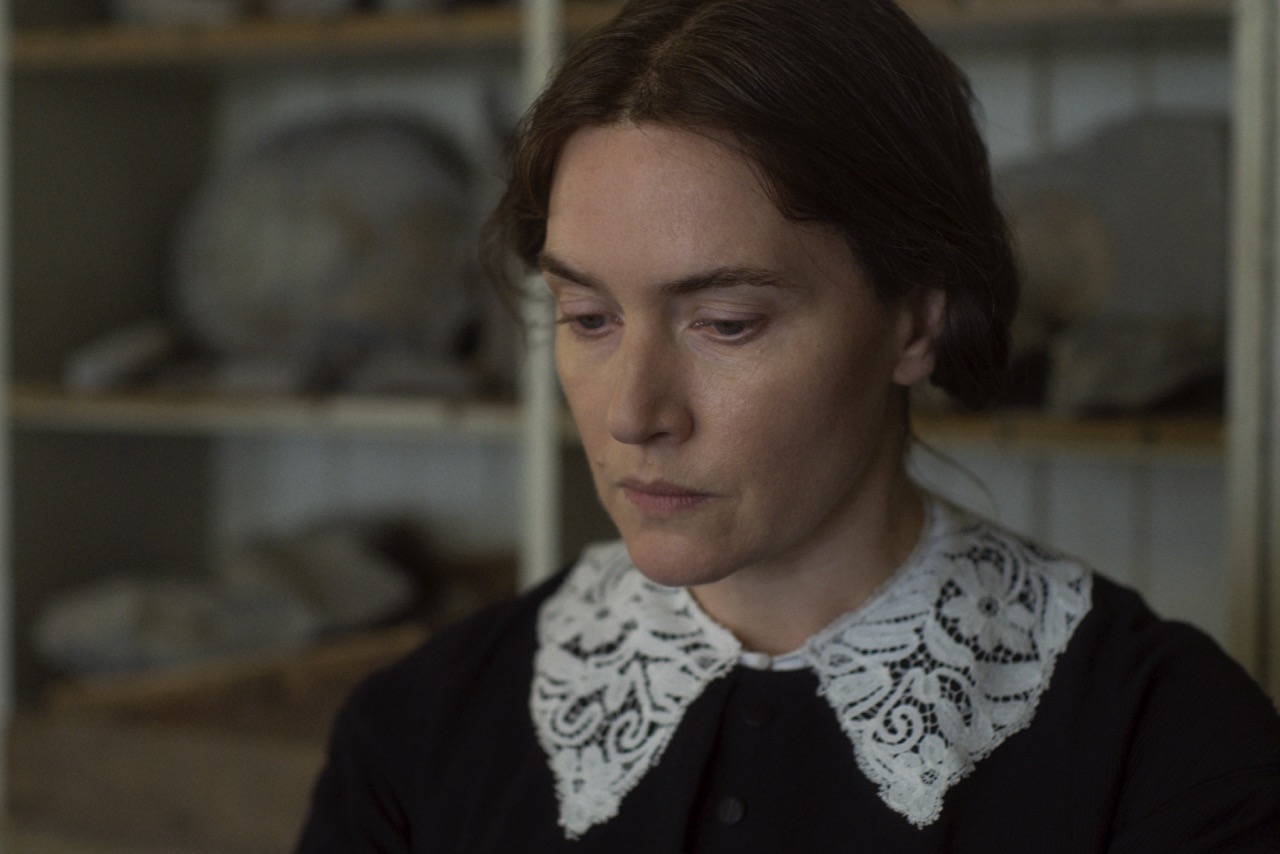 Too many scenes in Ammonite are freighted with similar thudding indignation or facile gestures or symbols, as if to compensate for not only the female scientist’s erasure but also the subjection of all women. While Mary, played with strenuous grimness by Winslet, scours the rocky beach—in search of specimens both to satisfy her scientific pursuits and to stock the fossil-and-curiosity shop she runs with her mother, Molly (Gemma Jones, who played Johnny’s granny in God’s Own Country)—we cannot fail to miss a seemingly minor sartorial moment, here elevated to gravest importance. The paleontologist, so long overlooked owing to her sex, must tuck her ankle-length skirt into the long johns beneath to make it possible for her to shimmy up a muddy incline to extract the remnant of the title, a spiral-shaped fossil of a mollusk.

Mary, at the very least, is spared the layers of tightly laced undergarments that Charlotte is fitted into daily—a physical restriction that would appear to extend to her ability to communicate. (Often Lee’s feeble analogies do all the talking, as when a shot of a fluttering insect trapped under a glass is immediately followed by the image of a morose Charlotte, unable to stir herself out of bed.) Several minutes pass before the upper-class young woman utters her first words (“Couldn’t we—”), a timid request regarding where to sit in a restaurant, silenced and overruled by her husband. When Roderick isn’t interrupting Charlotte, he’s speaking on her behalf. Ordering a gluttonous meal for himself—oysters, rare beef, a bottle of claret—Roderick instructs the waiter to bring his wife a meager repast of “plain white fish—baked, no sauce.” 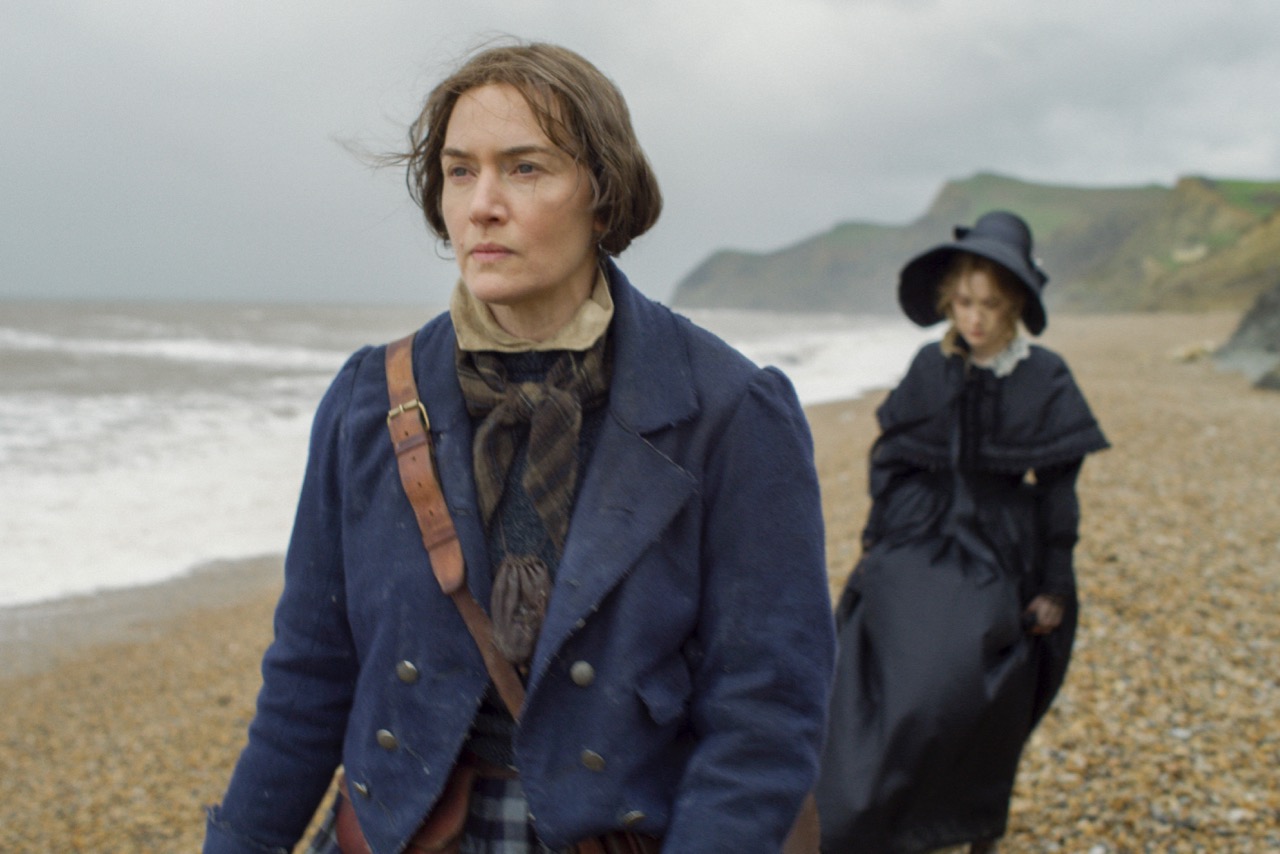 But soon Charlotte will acquire a taste for zestier delicacies. Roderick, a gentleman paleontologist, has arranged for Mary to look after his despondent spouse in Lyme Regis so that he may enjoy a monthlong archaeological tour of the Continent unencumbered. Her days now given meaning as Mary’s relic-foraging adjutant, Charlotte perks up. She removes her wedding ring so that she, too, can dig and scrape in the muck. The women slowly warm to each other. Charlotte’s hand lingers a second too long on Mary’s back. Their fingers graze. A chaste good-night kiss leads to the first of a few episodes of robust oral pleasuring.

These scenes of putative abandon, though, are mechanical, clinical—a science experiment of another sort. (Of the most intricate of these segments, Winslet told the Hollywood Reporter, “Saoirse and I choreographed the scene ourselves. It’s definitely not like eating a sandwich.”) Like the remains Mary collects and studies, she and Charlotte are mere impressions, shells of characters rather than fully fleshed-out personalities. Two ciphers in bed generate little heat. 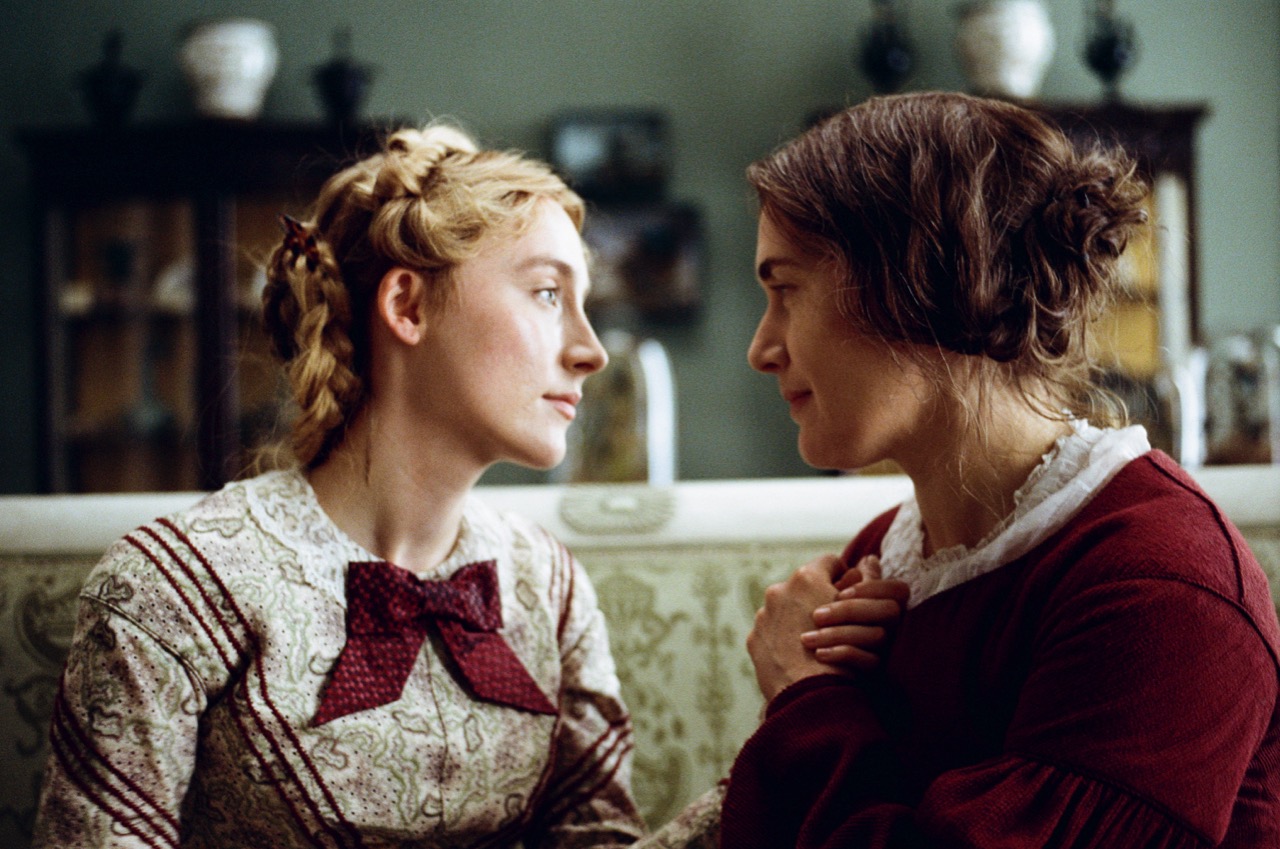 Ammonite recalls another littoral lesbian costume drama released last year, Céline Sciamma’s 1770-set Portrait of a Lady on Fire, a film that also stumbles as a polemic, railing against the oppression of women artists. But, in one crucial aspect, Sciamma’s movie gloriously succeeds where Lee’s fails, capturing the ardor between two women who are ravenous with curiosity about the other.

Yet there is an additional film, from more than fifty years ago, that I could not stop thinking about while watching Ammonite. Ingmar Bergman’s Persona (1966), though not a period piece, shares many elements of Ammonite’s plot: two women of different classes—the richer one (Liv Ullmann as Elisabet, an actress who stops speaking after what may have been a nervous collapse) convalescing, the poorer one (Bibi Andersson as Alma, a nurse) taking care of her—spend several weeks together on a rocky beach. The most carnally charged incident that occurs is a kiss on the back of the neck, which might have happened only in a dream. But Persona, a movie exquisitely attuned to the development of the principals’ psychic enmeshment, remains one of the greatest female love stories. Elisabet and Alma, and the relationship they form, is simultaneously detailed and open to multiple interpretations. Mary and Charlotte, in contrast, form a closed system—didactically drawn characters in a film whose explicit scenes succeed only in shutting down, not fostering, private, particular fantasies.