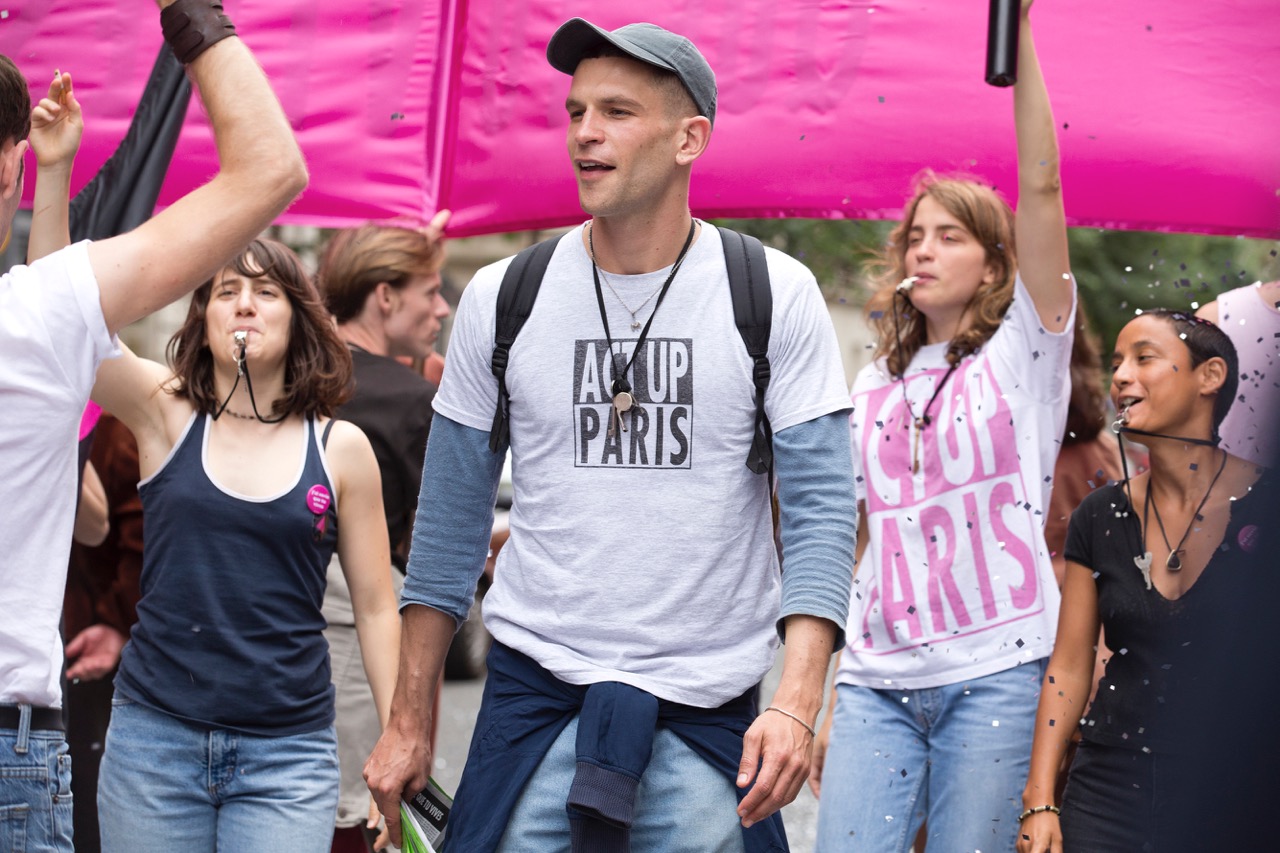 The original French title of Robin Campillo’s BPM (Beats per Minute), a bracing drama about the Paris branch of the direct-action advocacy group ACT UP in the early 1990s, includes a specific number: 120 battements par minute. That’s the average heart rate of a body engaged, as many of BPM’s ensemble are, in high-adrenaline activities, like sex, like the civil resistance that members of ACT UP (the call-to-arms acronym for AIDS Coalition to Unleash Power) engaged in to target those who did nothing to stop the disease. The figure is also the typical rhythm of house music, the hypnotic, post-disco genre that dominates BPM’s soundtrack, heavy on hi-hat cymbals and bass lines. The number sets the tempo for a film that pulsates equally with rage, grief, desire, and debate.

BPM, which Campillo co-wrote with Philippe Mangeot, is partially rooted in the director’s own biography: born in 1962, Campillo joined ACT UP–Paris in 1992. Although BPM is technically fiction, it has the rawness and immediacy of an eyewitness account, qualities often lacking in dramatized tales of LGBTQ history (Roland Emmerich’s ghastly Stonewall, from 2015, quickly comes to mind). Campillo’s movie forms a dialogue with two crucial 2012 documentaries about ACT UP in New York, where the inaugural chapter of the activist group was founded, in 1987: Jim Hubbard’s United in Anger: A History of ACT UP and David France’s How to Survive a Plague. (The Paris division, modeled on the one in New York, was formed in 1989.) Both of those impassioned nonfiction films combine archival footage with present-day interviews with ACT UP vets, who look back not only on the coalition’s guerrilla protests but on their much-younger selves. In BPM, Campillo also recollects memories from a quarter century ago—but he conjugates the past tense into a form of the present perfect. 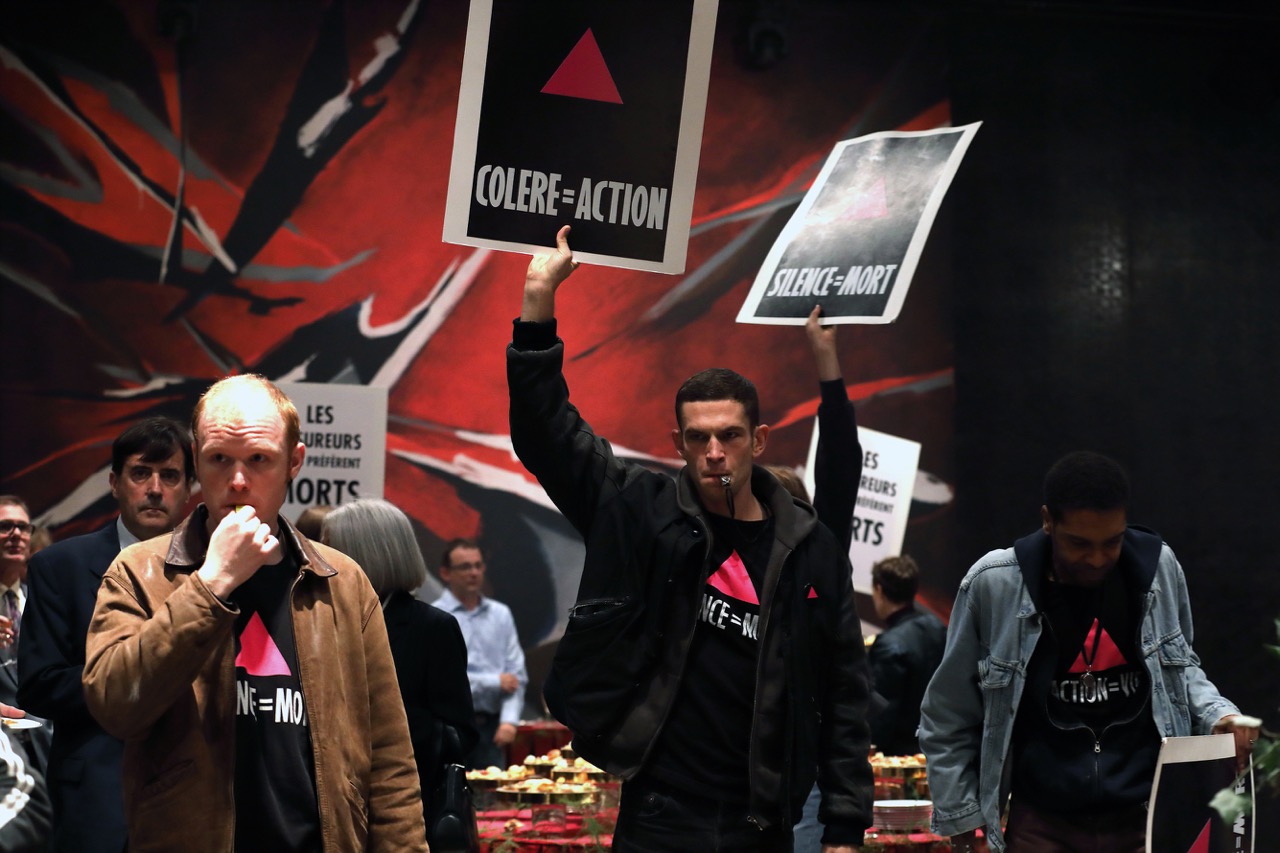 While BPM has the urgency of a communiqué, even if one from a not-so-distant era, it also seamlessly breaks free of a standard narrative arc: there are oneiric elements in the film and time doesn’t always move in a straight line. (Time, you might say, is queered.) We are immersed in the middle of the action—or, more specifically, of a demonstration about to happen—in BPM’s opening scene. Several ACT UP members are backstage at a conference, whispering, conspiring, placing whistles in their mouths, waiting for just the right moment to disrupt a speaker from AFLS, a French anti-AIDS agency that the direct-action group finds unconscionably laggard in its response to the epidemic. They storm the stage, air horns blaring, signs raised (“COLERE = ACTION”). The scene ends abruptly amid this cacophony and is followed by one set in the university lecture hall where ACT UP’s weekly meeting takes place. With their T-shirts and faces still smeared with the fake blood they tossed, those ACT UP members who took part in the AFLS action explain to their comrades what happened. No two flashbacks, some of which are rendered in slo-mo, are alike; they shift, in camera placement, in details recalled, with the recounting of each speaker, a few of whom are still upset with the on-the-fly tactics of their confreres at the demo.

That scene beautifully establishes the polyvocal energy that animates the drab, fluorescent-lit classroom where several segments of BPM take place. Campillo’s film is dense with talk: planning, analyzing, arguing, apologizing, inciting. (An oblique forerunner to BPM is Laurent Cantet’s similarly voluble The Class from 2008, about a junior-high teacher in the twentieth arrondissement and his African, Asian, and Arab students; Campillo co-wrote the script with Cantet, with whom he frequently collaborates.) Meetings have rarely seemed so riveting; the words come alive thanks to Campillo’s ferociously committed ensemble cast, most in their twenties and early thirties. Several performers make their screen debut in BPM. Only one actor in Campillo’s film is well-known in France: Adèle Haenel, superb, as she is in every film of hers I’ve seen that’s been released stateside, in the role of Sophie, a dyke member of ACT UP who ranks among its most headstrong members. Campillo’s coalition comrades are largely, but by no means exclusively, young gay white men. As was the case in real-life ACT UP meetings, BPM’s include attendees of different genders, races, generations, sexualities, serostatuses, and abilities (about half a dozen activists seated in the lecture hall are deaf)—a heterogeneity that’s organic, unforced. (That diversity is evidenced in Hubbard’s and France’s documentaries, too.) 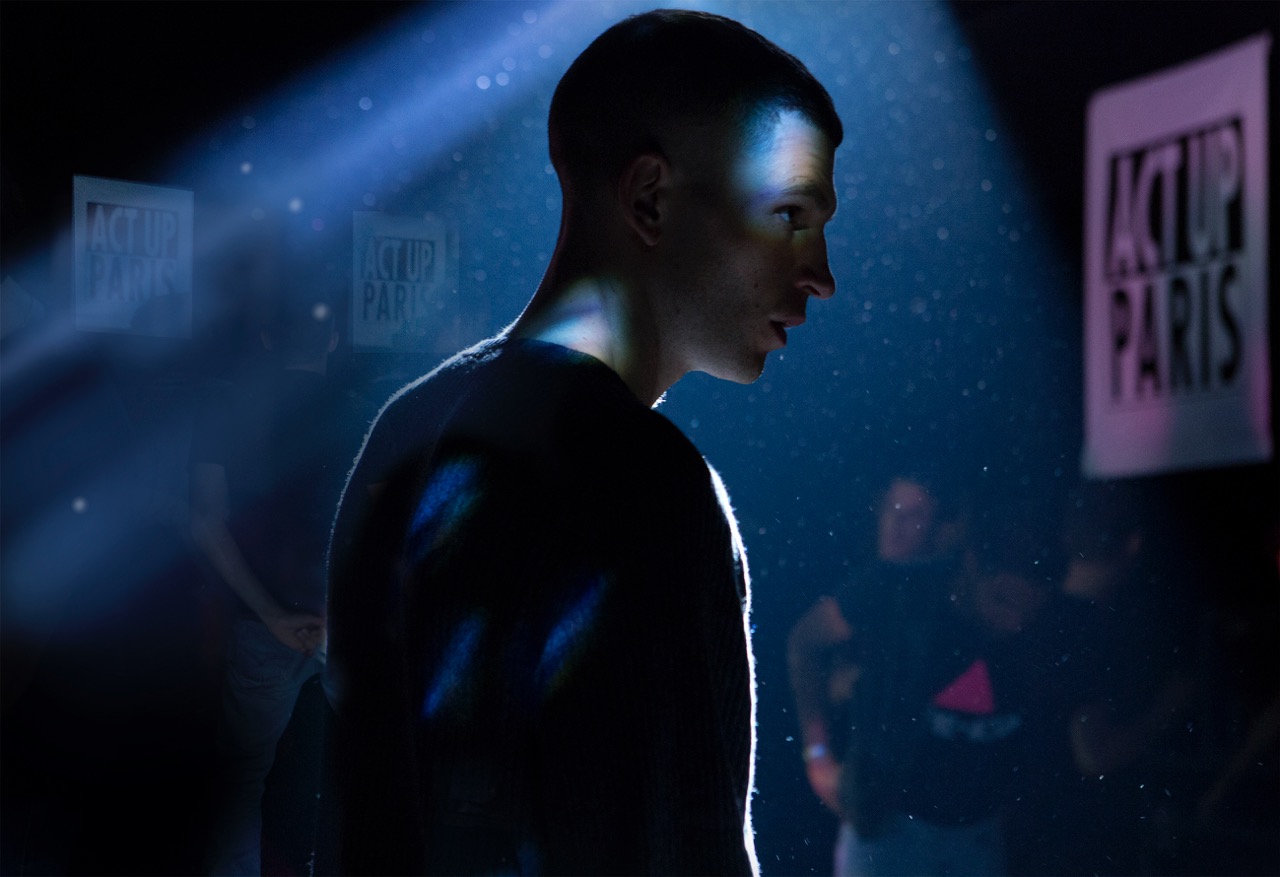 One of the interviewees in Hubbard’s chronicle memorably calls ACT UP a “cauldron of political anger, flirting, and cruising”; that libidinal intensity suffuses BPM. An ACT UP newcomer, Nathan (Arnaud Valois), is greeted by wolf whistles when he stands up to introduce himself. The shy, HIV-negative hunk is drawn to Sean (Nahuel Pérez Biscayart), a fervent member of the group whose T-cell count is rapidly diminishing. Though their love story, and Sean’s perilous health, provides the main through-line of BPM, especially in the film’s second half, this dyad doesn’t exist in isolation; the two men are always part of a collective, a cause, something larger than themselves. 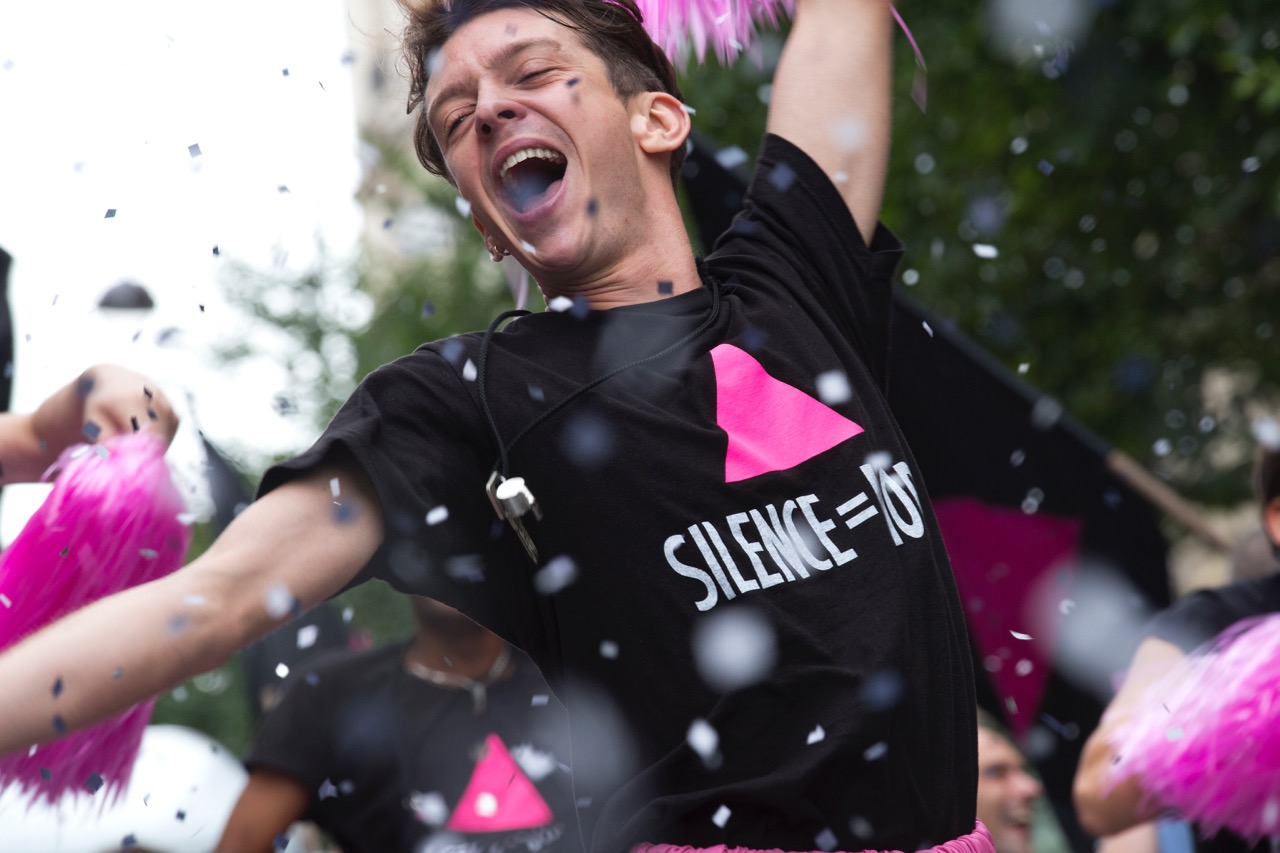 Through die-ins on cold Paris streets, the storming of pharmaceutical companies, heated discussions in that cavernous classroom and cozier apartments, and ecstatic gyrating on the dance floor, BPM reminds us again and again of the kinetic power of the group, of the tremendous vitality that results from so many disparate, ardent individuals united in fight. And here, of course, united exclusively IRL: one of my favorite moments in BPM is a fleeting scene shot from the back of the lecture hall during a fifteen-minute break in the weekly meeting, showing members talking in pairs or in larger groups, or sitting alone, absorbed in their own thoughts. No devices distract anyone.

Campillo’s film rousingly captures the vigor of those surrounded by death, many of whom were dying themselves. BPM makes vivid these potent remarks from the art historian, critic, and ACT UP vet Douglas Crimp, who, in a 2007 interview for the coalition’s Oral History Project, discussed “the kind of pleasures that can be associated with political activism, even in the face of truly gruesome problems and truly terrible things happening in our midst . . . I think it was lifesaving in more ways than one. Even for people who weren’t dying, it was lifesaving to be able to stand up against the kind of vilification that we were experiencing.” However specific its time frame and focus, BPM is not a narrow nostalgia piece, nor will it ever be as long as people are still dying, still being vilified. An odd coincidence: the title of Campillo’s film is only one letter removed from the abbreviation for Black Lives Matter. The beats go on.