Sometimes absurd but always absorbing, Claire Denis’s sci-fi adventure High Life, largely confined to a spacecraft, begins with a bit of baby talk. “Da-da,” cosmonaut Monte (Robert Pattinson) coos to his infant daughter, Willow, during their celestial voyage. It’s an apt prelude for a film that drifts off into Dadaism.

Irrationality, though, has often been the organizing principle of the great French filmmaker’s movies, especially those operating at the extreme ends of certain genres. Works like the sanguineous Trouble Every Day (2001), about lust-filled cannibals, and the freaky, fragmented travelogue The Intruder (2004), with a character imposingly named the Queen of the Northern Hemisphere, subordinate—excitingly so—narrative cohesion to mood and indelible sights and sounds.

That’s certainly true with High Life, Denis’s most expensive project to date and the first of her features to be shot primarily in a studio (in Cologne). The bleak outer-space epic is also her first to be entirely in English; after notoriously nixing a draft by Zadie Smith and Nick Laird, Denis scripted High Life with her longtime screenwriting partner Jean-Pol Fargeau (with the collaboration of Geoff Cox and Andrew Litvack). The dialogue, some of which sounds as though it were generated by Google Translate and random phrases lifted from an early-’90s slang dictionary, can startle with its ludicrousness. Whether the aural abrading is intentional or not, the infelicities further add to the (mostly) agreeable estranging, deranging effects of High Life. 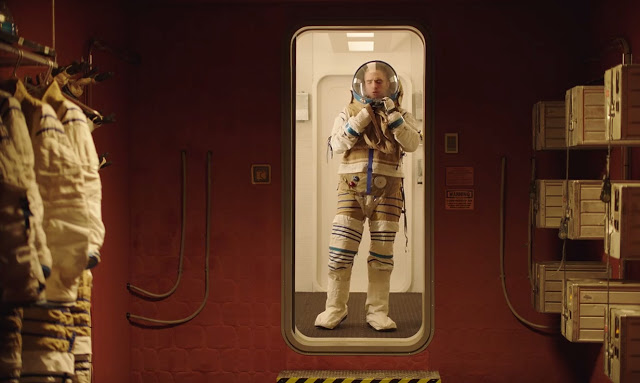 As with many of Denis’s films, her latest unfolds elliptically and achronologically. We soon learn that Monte and Willow are the only humans left aboard the spacecraft; the vessel, designed for the movie by the celebrity installation artist Olafur Eliasson, resembles nothing so much as a midcentury stereo console floating through the galaxy. Monte tosses the bodies of his dead crewmates—how they became corpses, and why they were selected for this assignment in the first place, will be revealed via flashbacks—into the cosmos, their slo-mo descent through infinity among the movie’s most beautiful spectacles. (High Life was lensed by cinematographer Yorick Le Saux, best known for his work with Olivier Assayas.) 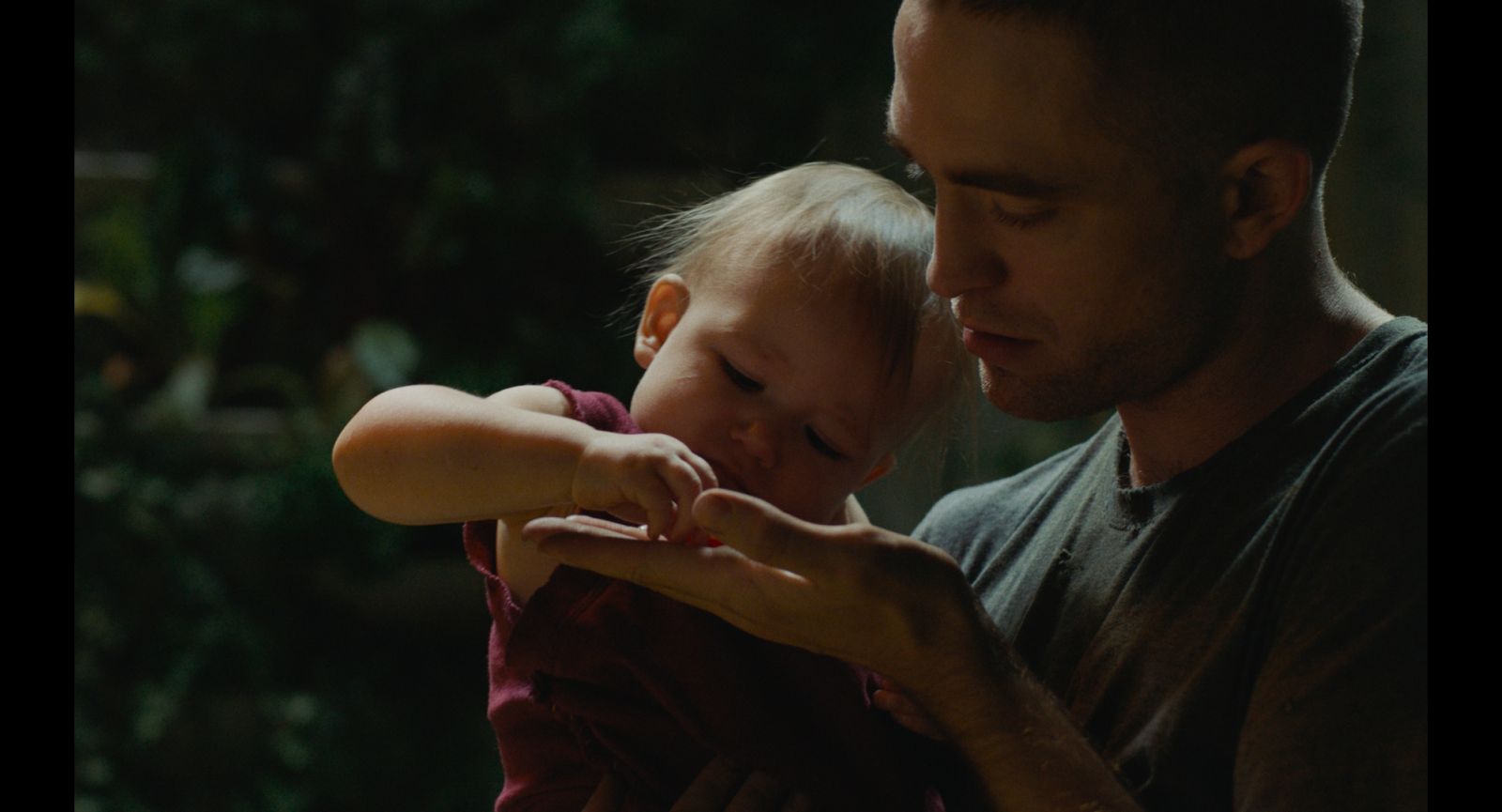 But before the film rewinds to those doomed astronauts, we luxuriate in the company of Monte and his child, who’s just on the verge of walking and is played by an exceptionally charismatic baby named Scarlett Lindsey. That this delightful little dumpling is the daughter of Pattinson’s real-life best friend may explain the incredible rapport between the actor, who continues to entrance in his post-Twilight roles, and his tiny, unpredictable, and ungovernable scene partner. Yet their moments of tenderness—Monte feeding Willow, singing softly to her as she sleeps, cheering her on as she learns to stand upright—can be tinged with menace. Potty-training his baby, Monte explains to her that she shouldn’t ingest her own waste: “It’s called a taboo.” He repeats that last word in cheery singsong (ta-boo, ta-boo, ta-boo) before voicing darker thoughts, uttered as self-admonition: “Break the laws of nature, and you’ll pay for it.”

As it turns out, earlier transgressions committed by Monte and his rocket-ship cohort explain their space odyssey. All death-row prisoners on Earth, these accidental astronauts, nine in total, have been “recycled,” as Monte says in impassive voice-over, used as guinea pigs on a mission to harness the energy of black holes, an expedition from which they’ll likely never return. The supporting cast includes performers of different races, genders, nationalities, levels of fame, and acting abilities; consistently excellent is André Benjamin, formerly one half of the buoyant hip-hop duo Outkast, and here playing Tcherny, a rueful, pensive man who finds solace tending the small garden (an ersatz Eden) that puzzlingly flourishes in the interstellar vehicle. 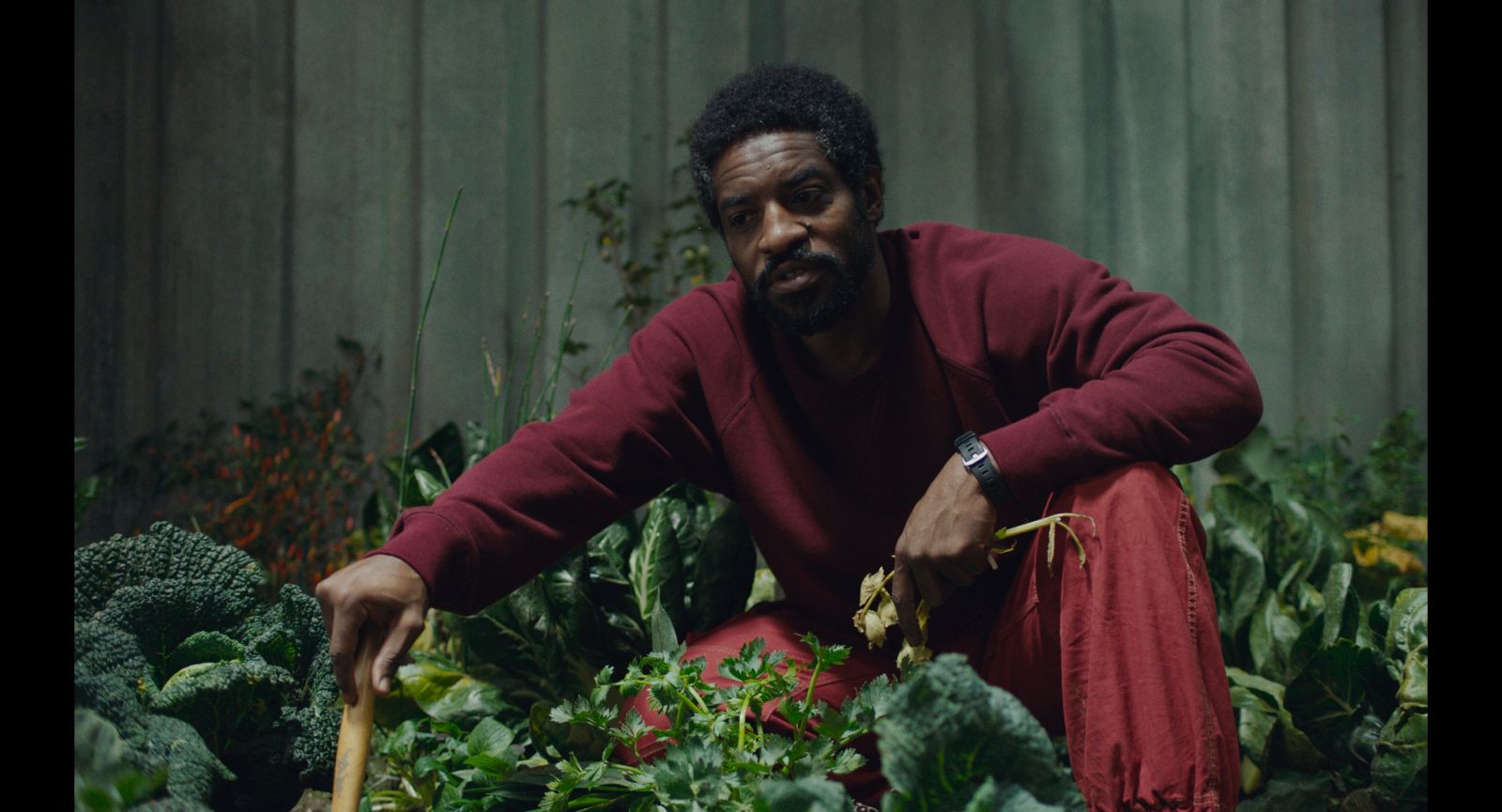 The most bewildering aspect of High Life, though, isn’t that lush patch of vegetation. As daffy as her character’s name—Dr. Dibs—Juliette Binoche, embellished with ass-grazing hair extensions, thrashes through the film like a banshee. Or as the physician herself snarls, overstating the obvious: “I know I look like a witch.” The condemned rocketeers already exist in zero gravity; the actors who portray them must acclimate themselves to zero oxygen whenever the wildly emoting international star is onscreen.

A majority of High Life’s most outlandish lines are given to Doc Dibs and are delivered by Binoche with a bizarre solemnity, as if she’s been cast as Gertrude in a Robert Wilson production of Hamlet staged at Avignon. She incongruously refers to the “big booty” of a waifish crew member named Boyse (Mia Goth), to whom she also delivers this risible reproach: “Hey, stop doing that. Douching is for amateurs.” 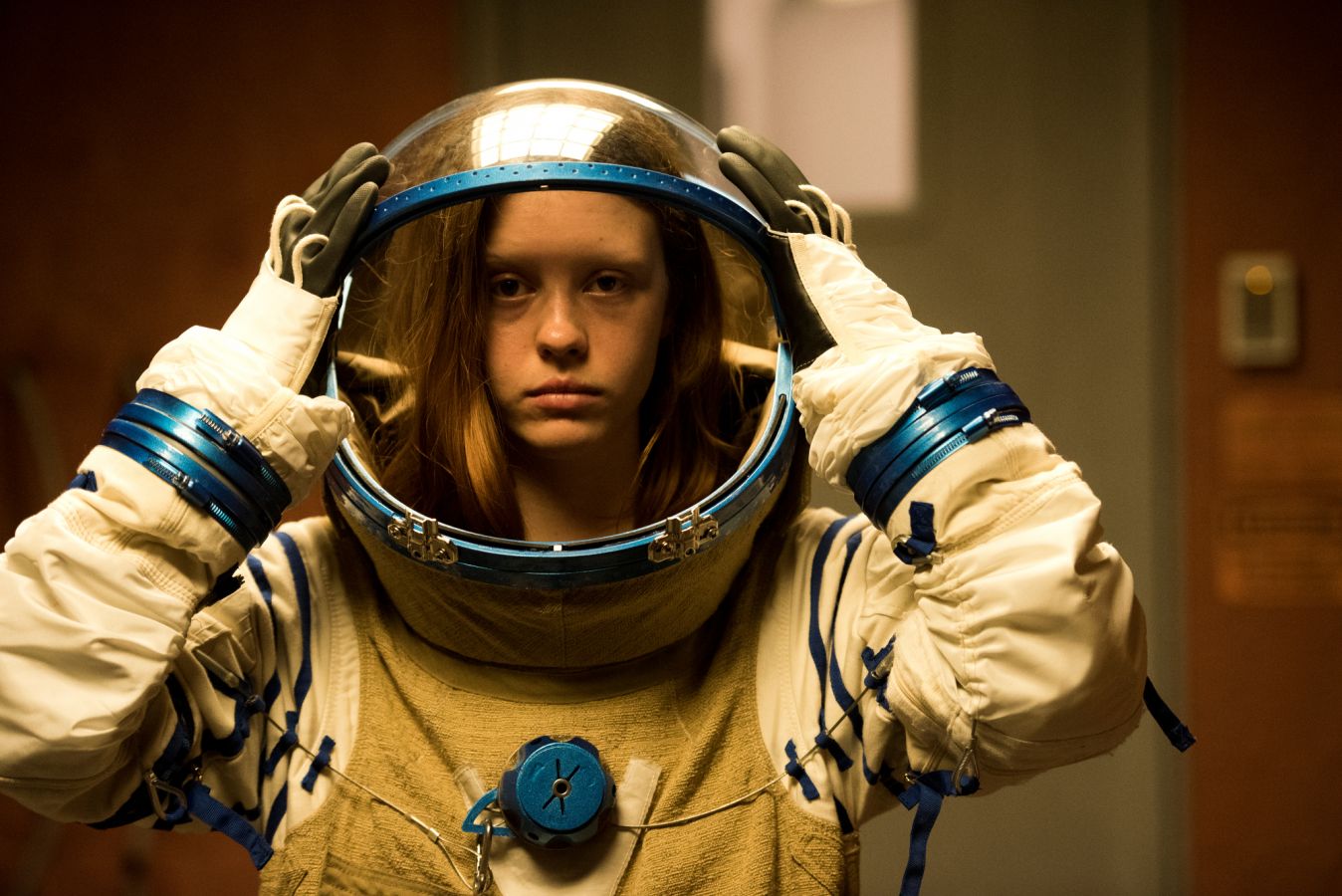 It’s not just Boyse’s genitalia that Dibs is overly concerned with. The doctor performs a series of invasive gynecological procedures on the rocket’s women in a mad quest to bring a fetus to term—a challenge, given that sex among the intergalactic inmates is prohibited. (Willow is made via one of Dr. Dibs’s primitive reproductive technologies.) After two viewings of High Life, I still can’t make sense of this particular interdiction. But, as ever in Denis’s oeuvre, logic is dispensed with to accommodate the filmmaker’s far-out notions and unforgettable tableaux—in this case, a one-person chamber equipped for masturbatory pleasures, an enclosure that the director has referred to as “the fuck box.” 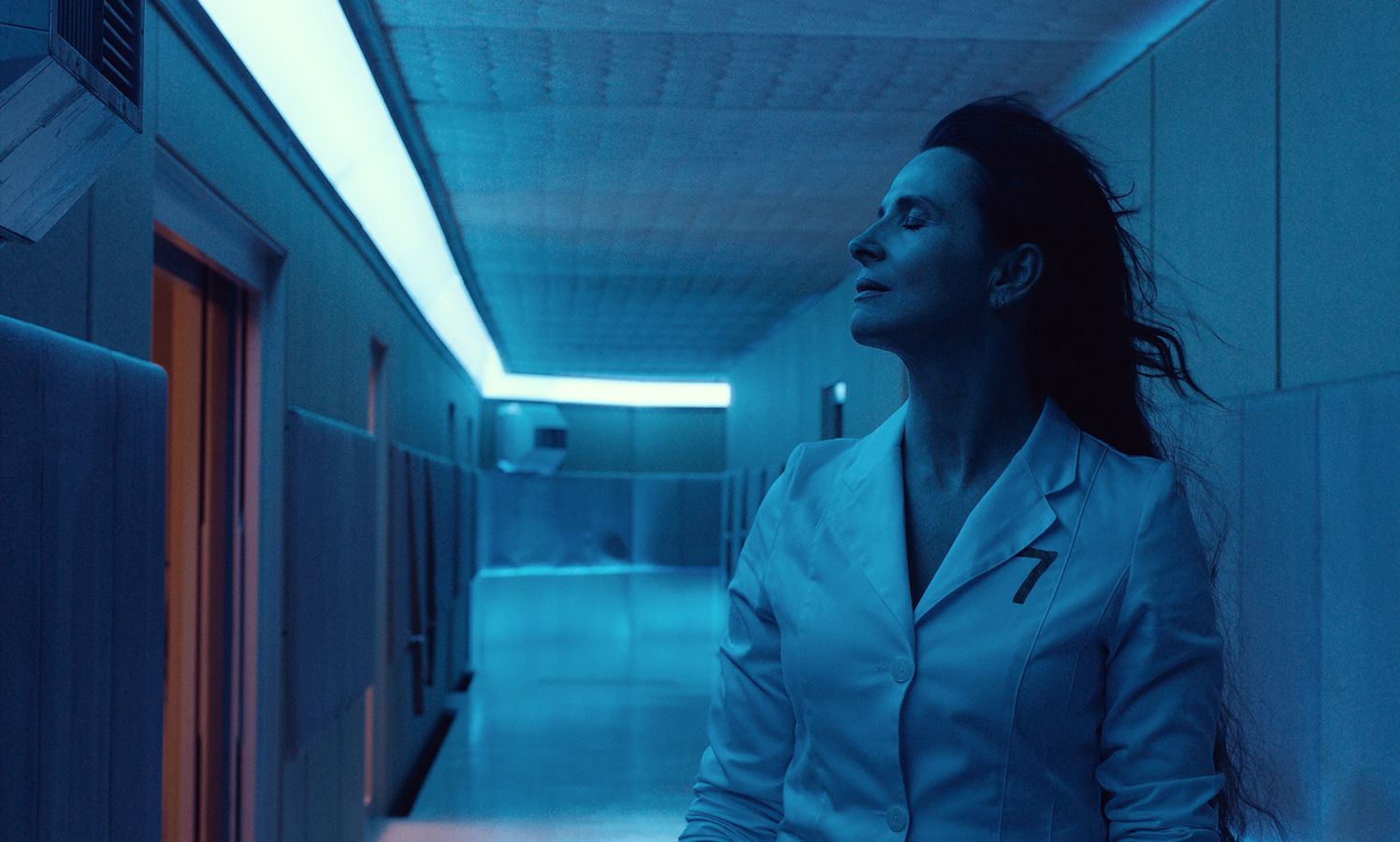 The scene, however outrageous, calls to mind others from Denis’s filmography, like the ghastly “sex barn” from her scabrous, furious Bastards (2013), loosely inspired by the excesses of Dominique Strauss-Kahn. But even her gentler movies, like Friday Night (2002), 35 Shots of Rum (2008), and last year’s Let the Sunshine In, also starring Binoche (and, as with the three earlier titles mentioned, set in Paris), plumb to some degree the ways that desire destabilizes and occasionally disorders. Later in High Life, when Willow becomes an adolescent (she’s played at this age by Jessie Ross), Monte’s interactions with her grow strained by the urges he’s struggling to repress. Ta-boo, ta-boo, ta-boo: no matter where Denis’s movies take place, her characters always exist on a forbidden planet.