In Lee Isaac Chung’s film, farming is a fresh start for a Korean family. 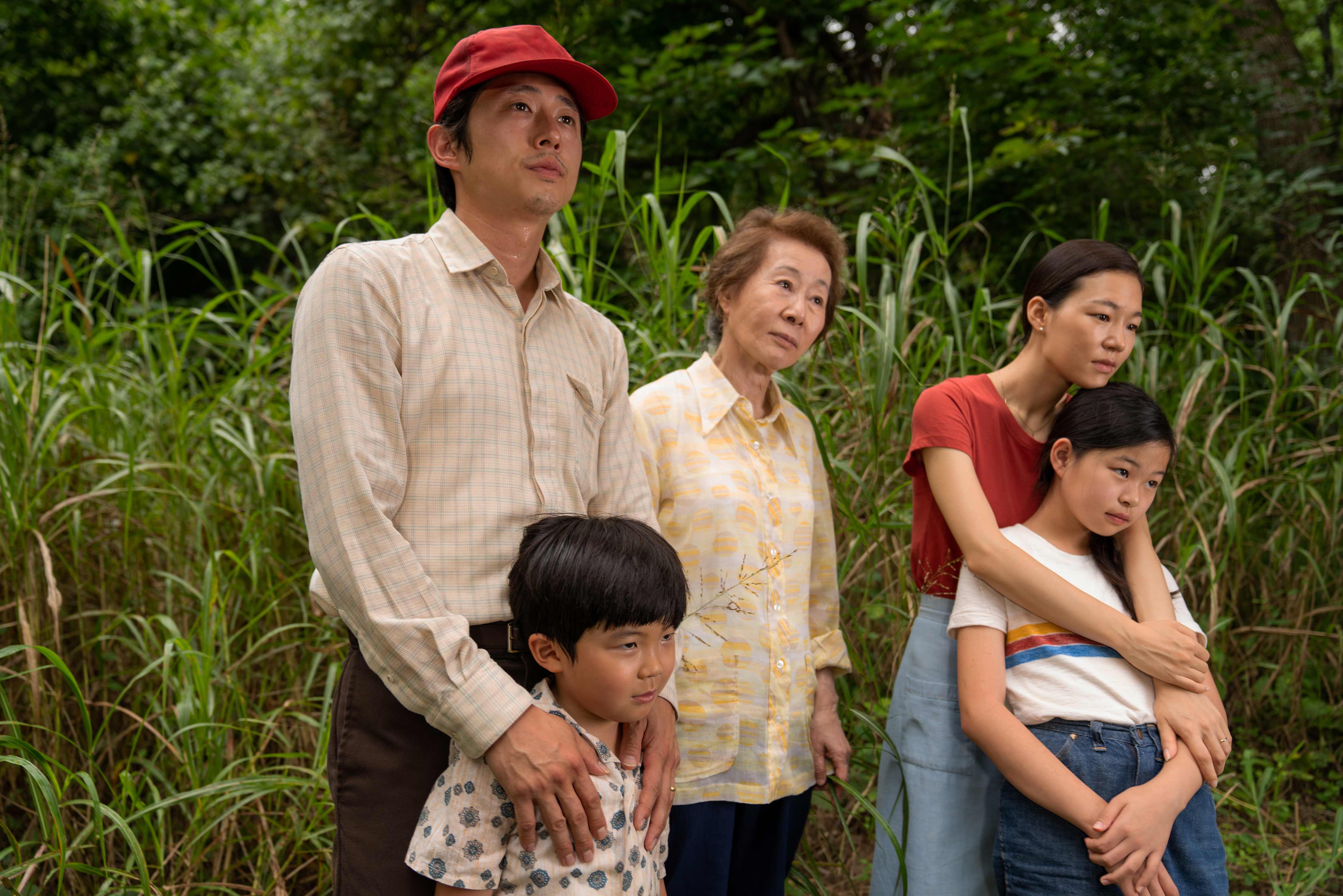 Minari, written and directed by Lee Isaac Chung, available to rent on all major digital platforms and on cable VOD

Earlier this year I came across a sentence that impressed me with its profound equability. “To endure can be at best a triumph; at worst, it teaches,” the sculptor Anne Truitt wrote in a journal entry from February 1975, diary jottings later collected as Daybook (1982). Within the superlatives of her concise pronouncement, Truitt powerfully evokes the vast range of what else “to endure” might mean or signify. Her observation often came to mind while I watched Minari, Lee Isaac Chung’s partially autobiographical film about a Korean family of four that relocates in the 1980s from California to Arkansas so that the father may fulfill a dream to start his own farm. Compassionate, composed, and largely scraped of sentimentality, Minari plumbs the intricacies of abiding for each member of this quartet as they adjust to their new environment.

Chung, who was born in 1978 in Denver to South Korean–immigrant parents and grew up on a small farm in northwest Arkansas, has cited this quote from Willa Cather—perhaps this country’s most eminent chronicler of immigrant farmers in the American heartland—as crucial to his conception of Minari: “Life began for me when I stopped admiring and started remembering.” Chung’s warm act of recollection seeks not to exalt or vilify but to empathize, always alert to the subtle shifts in dynamics among the Yis. 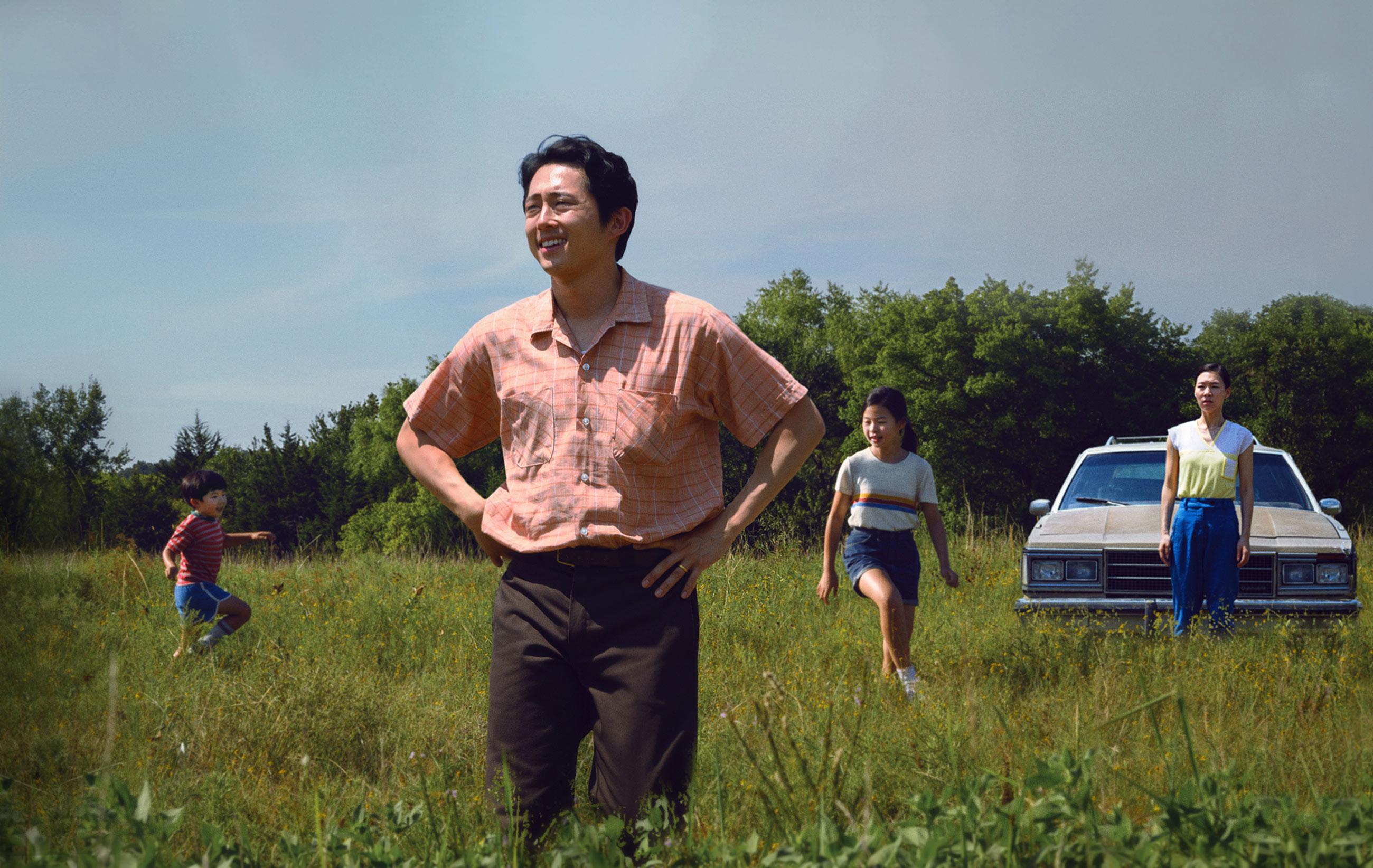 From left to right: Alan Kim as David, Steven Yeun as Jacob, Noel Kate Cho as Anne, and Yeri Han as Monica in Minari. Courtesy A24. Photo: David Bornfriend.

That close attention is evident from the first scene, as the family travels in two separate vehicles to their new home in the Ozarks: Jacob (Steven Yeun) leads in a rented moving truck; behind him in the family station wagon is his wife, Monica (Yeri Han), accompanied by their kids, seven-year-old David (Alan Kim) and Anne (Noel Kate Cho), whose age is never given but appears to be ten or eleven. The camera stays on Monica and the children during these opening minutes, registering their slight flashes of wonder as they get closer to their destination. That spark of enthusiasm quickly morphs into horror (for Monica) and confusion (for Anne and David) when they take in what Jacob is so proud of: a trailer home perched on cinder blocks, in the middle of a field with no one around seemingly for miles. “What is this place?” Monica, aghast, says to her husband; nonplussed but avidly curious, the kids decide to inspect their strange dwelling, speaking to each other in English, the language that dominates their sibling communication. 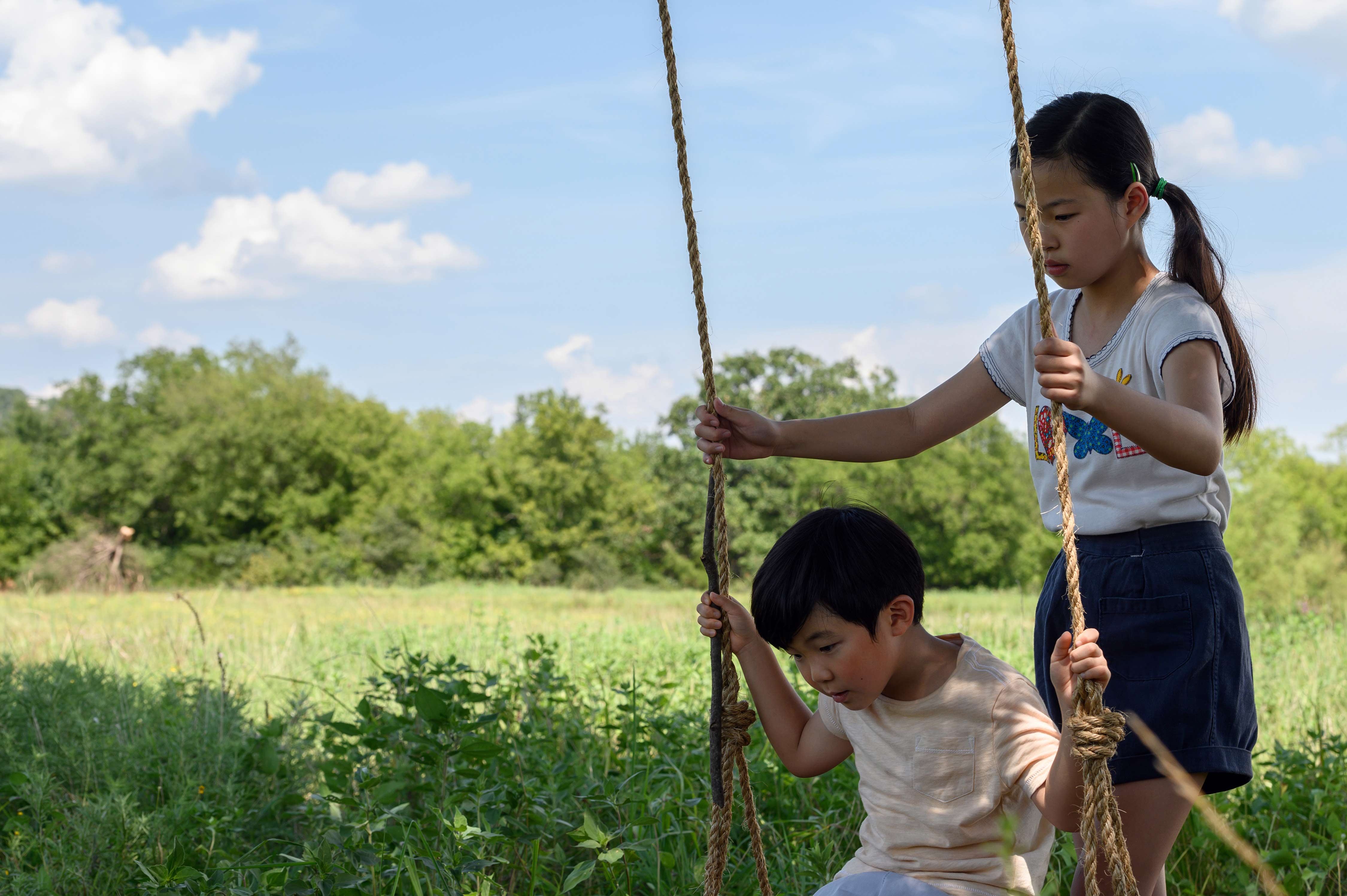 That Anne and David, sensing tension between their parents, instinctively know to appear neutral and to make themselves scarce highlights their emotional intelligence—the agility of their responses amplified by the fact that Cho and Kim, making their screen debuts here, possess the guilelessness and ease in front of the camera that distinguish the best child movie actors. At times, though, the kids express their weariness over Mom and Dad’s quarrels more bluntly: “Don’t fight” they write on several scraps of paper, folded into airplanes that they send flying out into the living room, where once again Jacob is countering Monica’s complaints about their move to such an inhospitable area with obstinate optimism.

“We said we wanted a new start. This is it,” Jacob declares to his wife. For the paterfamilias, that fresh beginning hinges on his small-scale farm, planted with Korean vegetables that he’s certain will be in high demand, owing to the thirty thousand Korean immigrants arriving to the US each year during the Reagan era. If his enterprise succeeds, he and Monica can finally abandon their dispiriting jobs, begun in California and continuing in Arkansas, as chicken sexers—separating female chicks, valued for their egg-laying, from the less commercially viable males. Since school is not yet in session when the Yis land in Arkansas, Anne and David must tag along with their parents to the hatchery, keeping themselves occupied in the break room by leafing through the encyclopedia (“You read the E volume, and I’ll read the C volume,” Anne instructs her little brother). 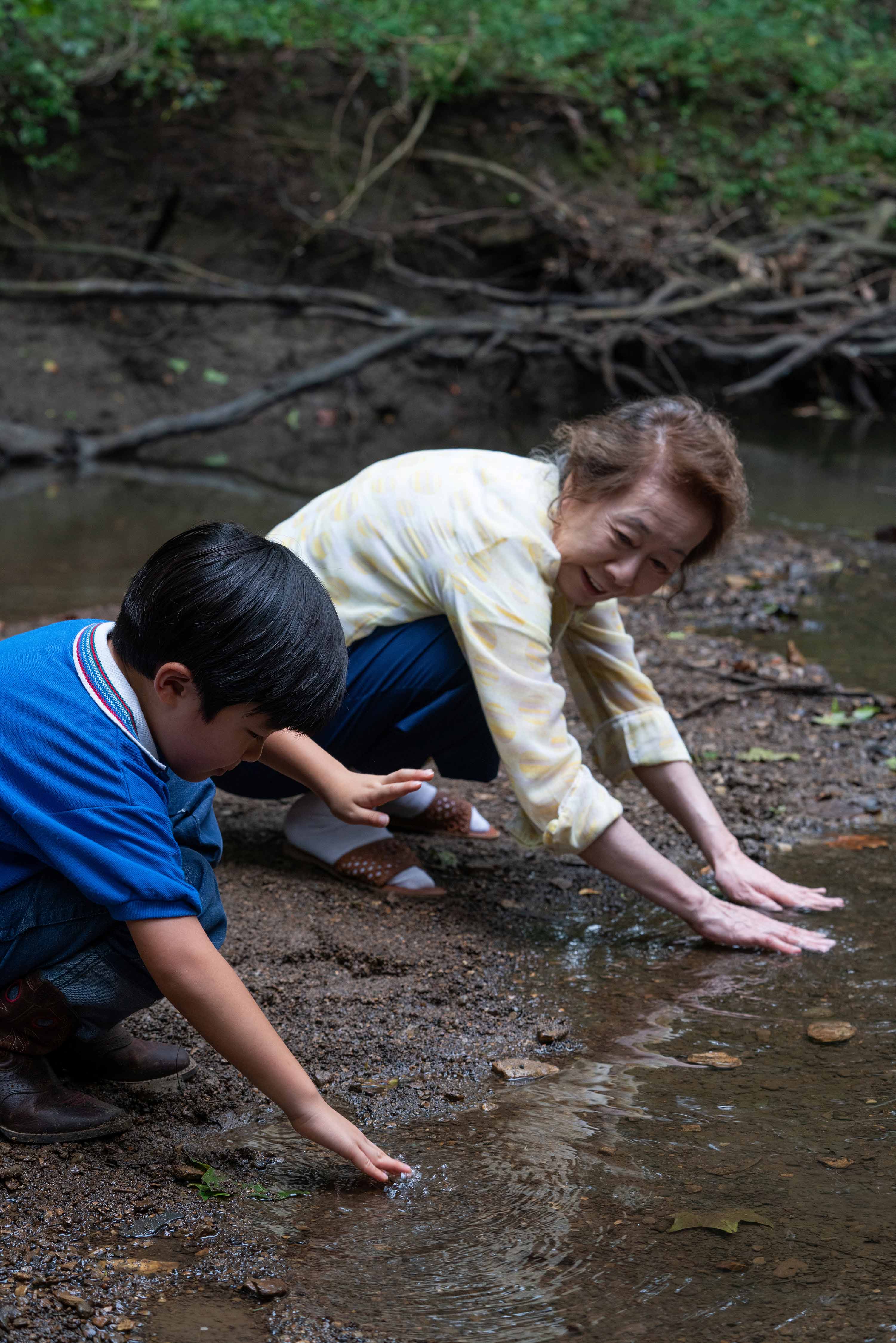 Alan Kim as David and Yuh-Jung Youn as Soonja in Minari. Courtesy A24. Photo: Melissa Lukenbaugh.

However forbearing, Anne and David are prone, as all children are, to tantrums. That’s especially true of David, who must share his bedroom with his maternal grandmother, Soonja (Yuh-Jung Youn), after she makes her inaugural voyage to the States to help look after the kids and to assuage Monica’s loneliness. “Grandma smells like Korea!” the boy protests, though he’s never been to the country. (In her luggage, she’s carried the seeds for the Korean herb that gives Chung’s film its title.) United by their physical fragility—David has a heart murmur and is always being commanded not to run—Soonja and her grandson eventually form a close bond, a process that leans a little too heavily on high jinks, a rare instance of soppiness in this otherwise astutely observed movie. 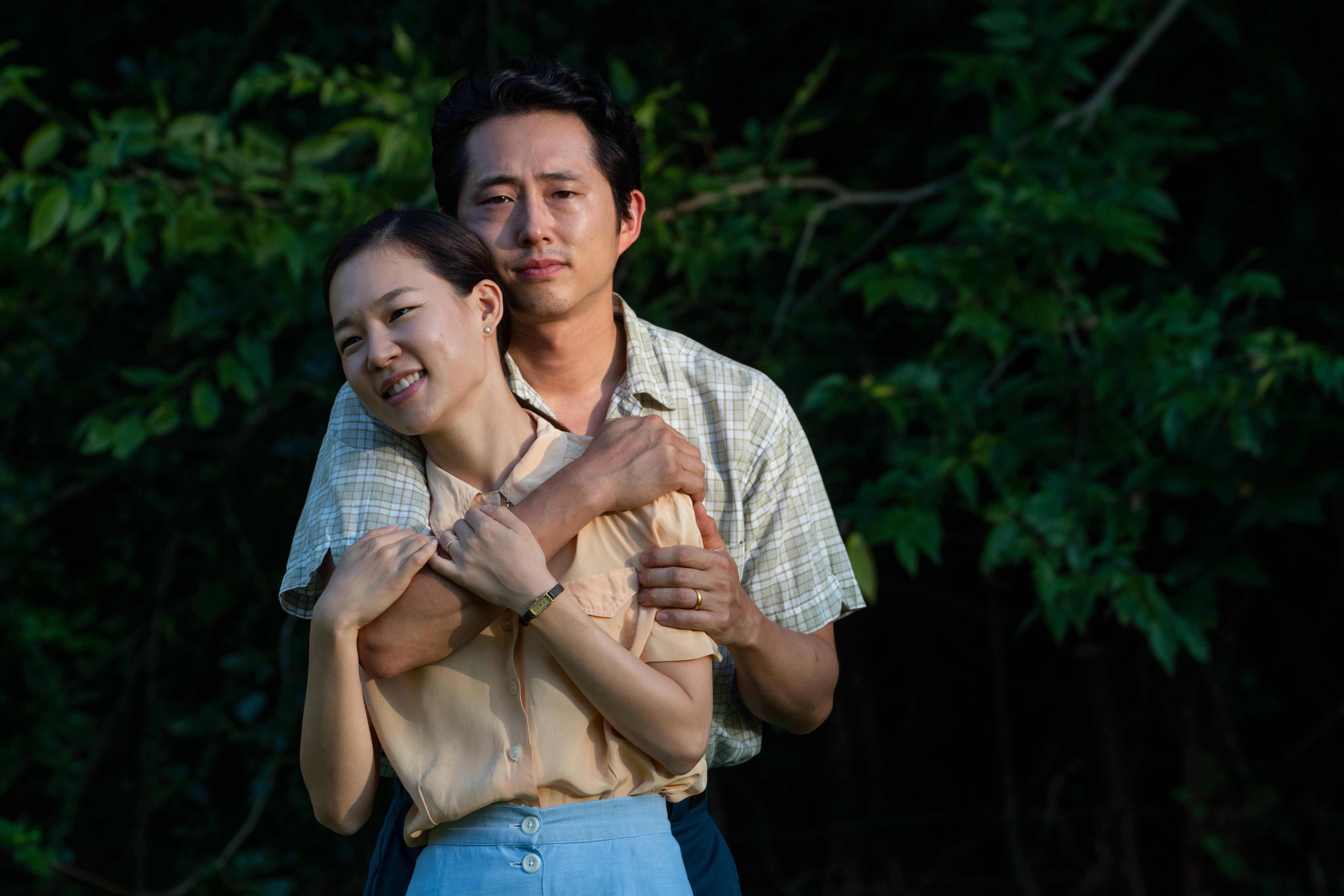 That precise scrutiny extends to the way that long-held connections are tested. Jacob and Monica’s squabbles aren’t marked by petty recriminations but by the deeper anguish of no longer feeling supported by the other. At a particularly low moment between the spouses, Jacob recalls their early hopes that by immigrating to the US, they’d be able to “save each other.” Their rescue mission falters when the risks Jacob is willing to undertake to realize his vision become unbearable blows to Monica’s tenuous sense of security. And yet their love for each other is so ineradicable that Jacob promises to honor his wife’s self-abnegation with his own. “If [the farm] doesn’t work out, you can leave if you want,” he tells her, a line delivered by Yeun—who was so unsettling as the posh bachelor sociopath in Lee Chang-dong’s Burning (2018)—with a touching despair and vulnerability, a painful admission that for all of his zeal, he just may fail his wife and children. 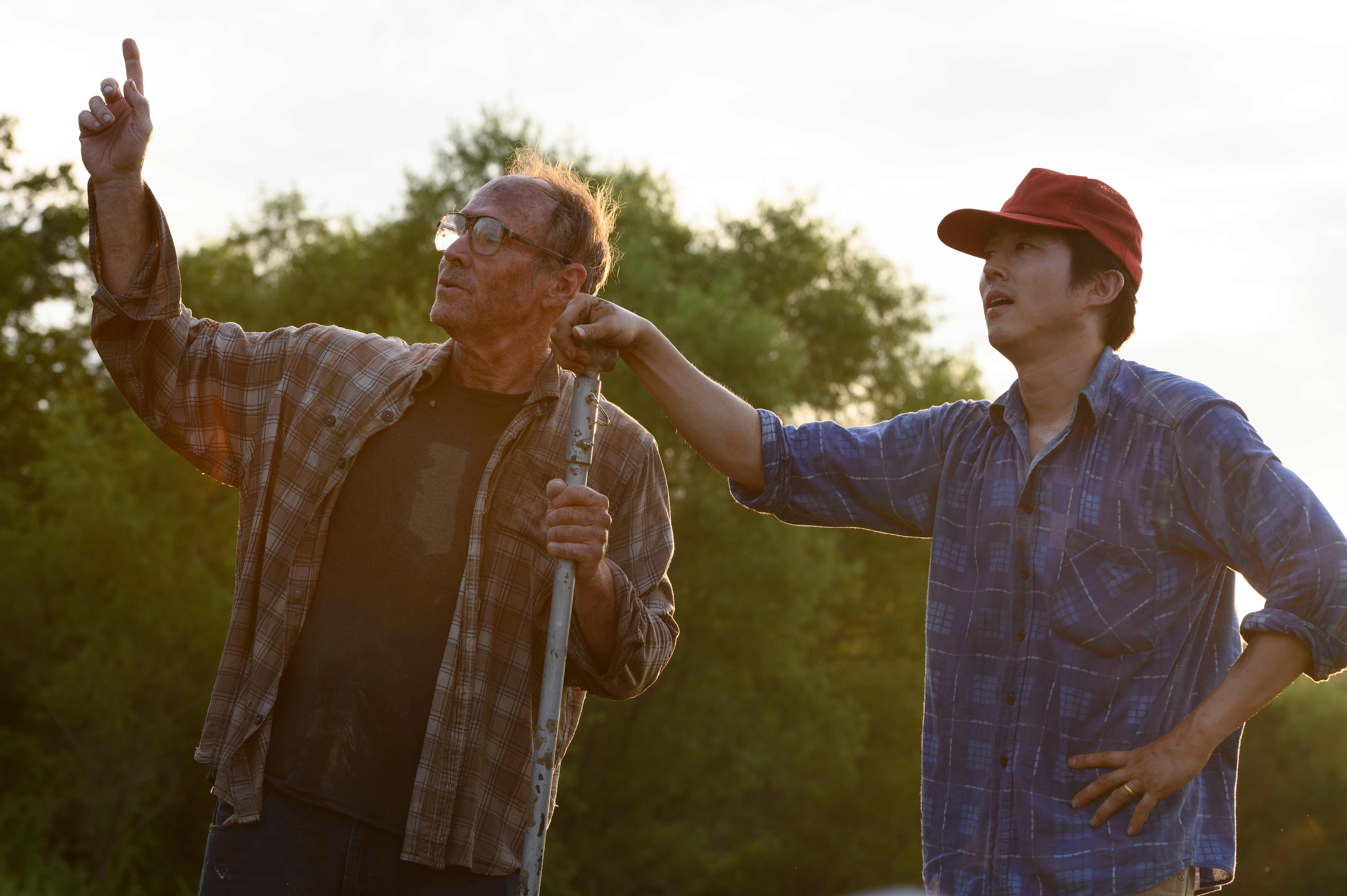 Will Patton as Paul and Steven Yeun as Jacob in Minari. Courtesy A24. Photo: Melissa Lukenbaugh.

Beyond intrafamily ties, Minari keenly analyzes how the Yis navigate new customs and relationships in the Ozarks. Jacob patiently allows a local wizened dowser to point his rod at potential water sources on the farm before politely dismissing him (“Koreans use our minds,” Jacob boasts to David). Paul (Will Patton), Jacob’s lone employee, perplexes the Yis with his extreme Pentecostalism; soon enough he’s their first dinner guest. At church, a boy named Johnnie (Jacob Wade) stares at David and later asks, “Why is your face so flat?” Indelicate, the question isn’t hostile; John quickly offers his friendship. Their alliance is just one way that David begins to make sense of himself as he goes through that most overwhelming, rule-bound, and surveilled phase of life: childhood.