Film
Out of the Blue 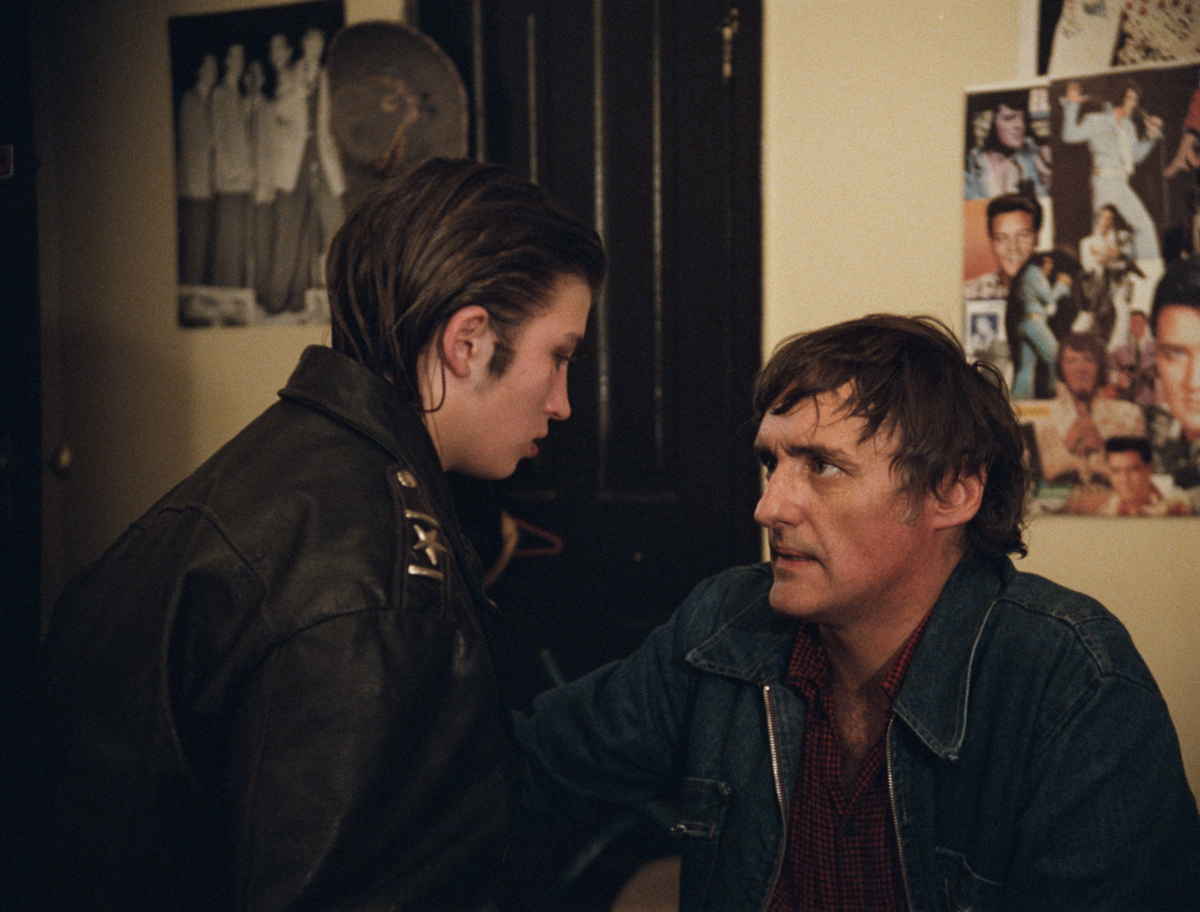 Out of the Blue, directed by Dennis Hopper, now playing at Metrograph,
7 Ludlow Street, New York City, through November 30, 2021

Few American filmmakers have been drawn to immolation, whether literal or figurative, quite like Dennis Hopper. Easy Rider (1969), the actor’s directorial debut, concludes with the Harley-Davidson chopper ridden by Peter Fonda’s Wyatt ablaze in a patch of scrubby grass off the highway. The phenomenal success of that woozy road-trip movie, animated by heavy drugs and hippie logic, launched Hopper “into the pantheon of countercultural celebrities,” per Peter Biskind in Easy Riders, Raging Bulls, his gossipy 1998 chronicle of the rise and fall of New Hollywood. That cachet quickly burned up with his second film, the critically savaged The Last Movie (1971), a metafictional freak-out doubling as a gloss on pernicious American myths, in which Hopper stars as a disillusioned movie-stunt coordinator living in exile in Peru. The title proved grimly auguring: Hopper wouldn’t make another feature until 1980’s Out of the Blue, a film so despairing that the conflagration that ends it comes as a tremendous relief.

That directing gig came about by happenstance, as opening title cards for the new 4K restoration explain. Originally Hopper had been hired only to act in the movie, then called Cebe, the nickname of the troubled teenage girl at its center. Displeased with the footage two weeks into filming, the producers sacked director and cowriter Leonard Yakir and wanted to nix the entire project. But Hopper salvaged the film, feverishly rewriting the script over a weekend, adjusting it to better accentuate the personality of Linda Manz, the incredible performer who plays Cebe (pronounced “cee bee,” it’s short for her real name, Cindy Barnes, and also refers to the radio communication she favors). By Monday, Hopper was in the director’s chair, transforming what had once been a rather conventional melodrama into one of the bleakest depictions of a nuclear family ever seen on screen. 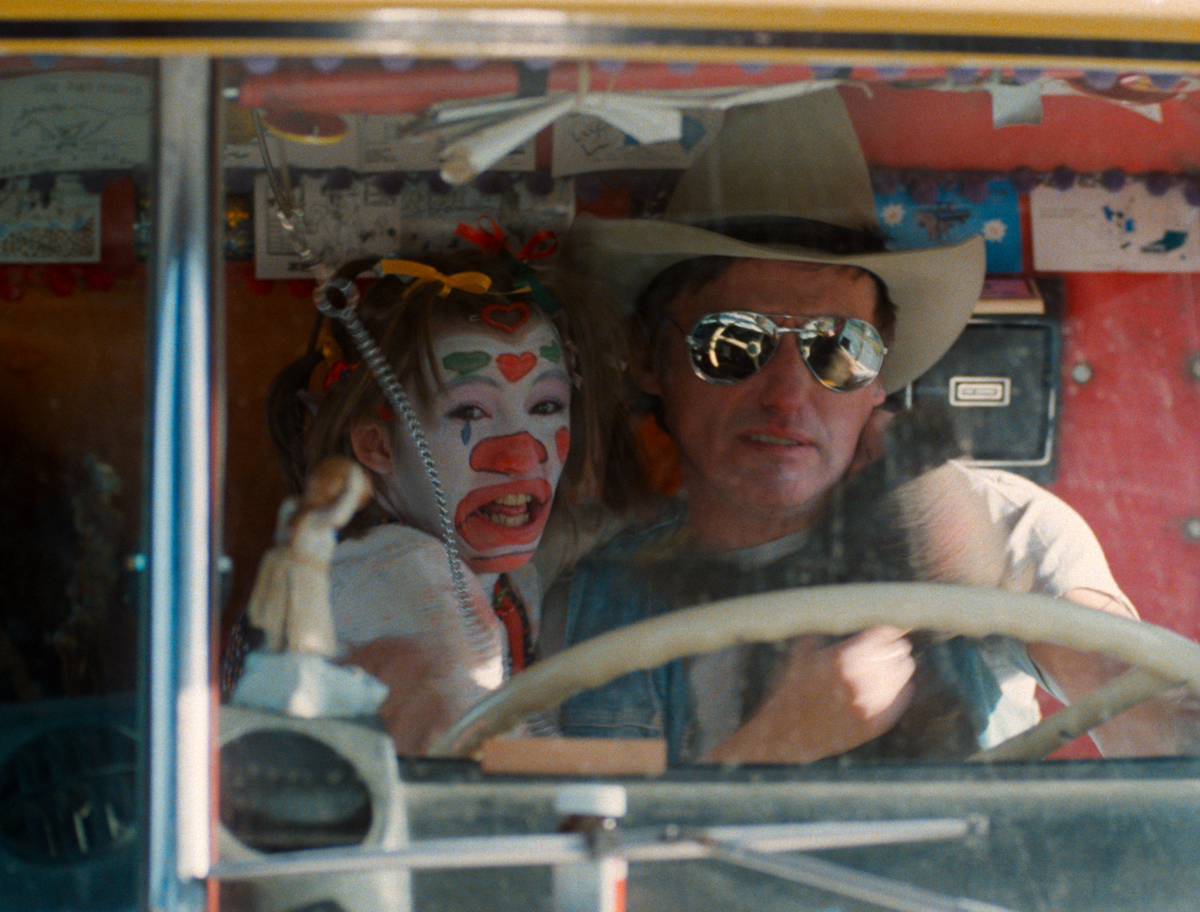 Immediately plunging us into hell, Out of the Blue—its title taken from the opening track of Neil Young’s 1979 album, Rust Never Sleeps—begins with a massacre: Cebe’s dad, Don (Hopper), plows his semi into a school bus stalled at an intersection and filled with little kids dressed up in Halloween costumes. The minute or two leading up to the collision hints at the abject father-daughter dynamic made much more explicit in the film’s last act. Cebe, outfitted as a clown and sitting next to her pop in the truck’s cab, is tasked with opening a bottle of pills for Don (which he washes down with booze) and answering his desperate query: “Am I as sexy as Elvis?” 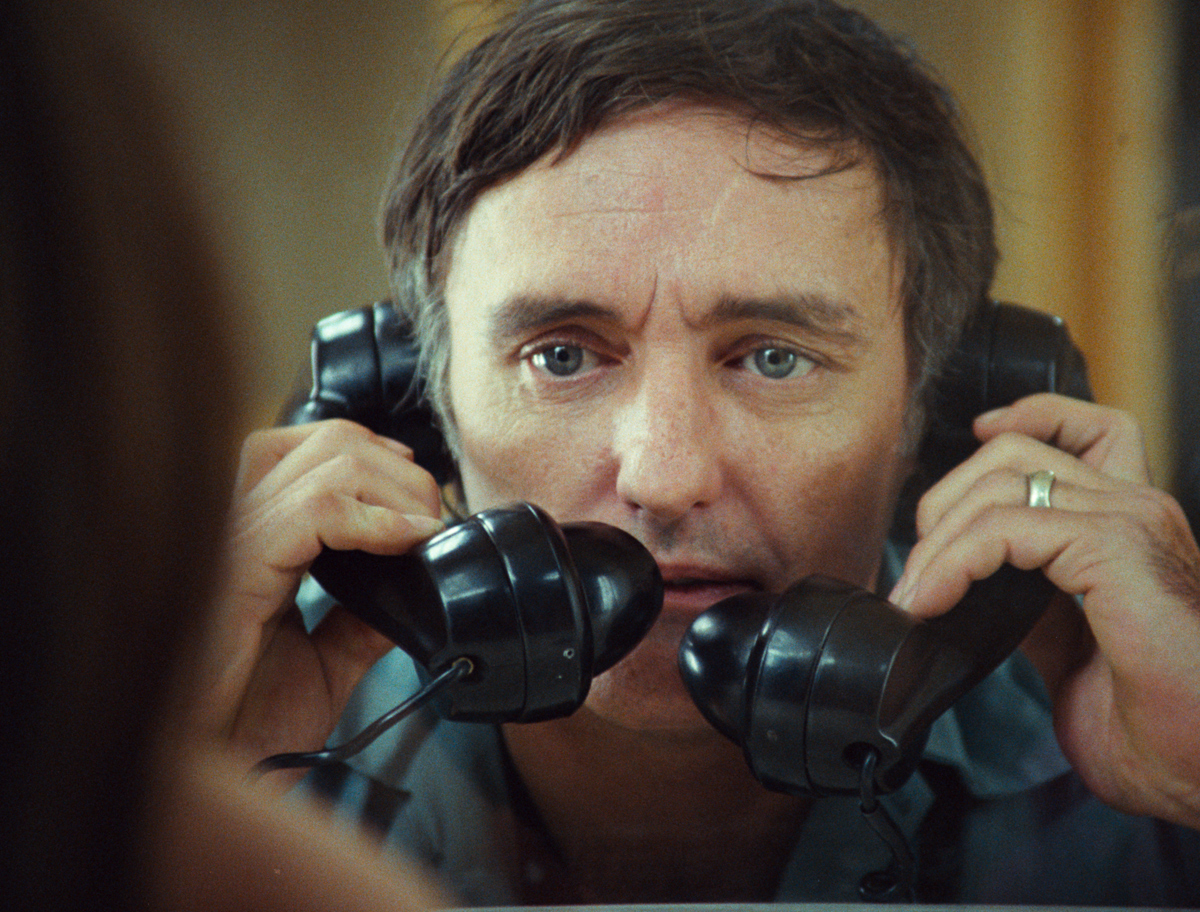 Dennis Hopper as Don in Out of the Blue. Photo: Discovery Productions.

Five years after that prologue, Don is nearing the end of his prison sentence for the slaughter, and Cebe, now fifteen, drifts through her desolate Pacific Northwest environs in an anomic stupor, a handheld tape recorder and a teddy bear her only true companions. Determined to be out of the house—or at least away from her ma, Kathy (Sharon Farrell), a smack-addicted waitress who casually ties off in the TV room—Cebe spends her nights ambling from a bowling alley to a cinema projection booth, from a dive bar where she’s bounced for trying to order a rum and Coke to an all-ages club where she briefly pounds the skins. In her most perilous adventure, she barely escapes a pervy taxi driver.

While Cebe may be rudderless, she is not without a credo. Worshipping both the King (photos of Presley are plastered all over her bedroom) and Sid Vicious, the adolescent is all too eager to recite her rallying cry: “Disco sucks. Kill all hippies. Subvert normality,” lines made even more indelible by Manz’s distinct New Yorkese (“Punk is here forevah”). With her coiled, baby-butch swagger, the actress—whose androgynous features uncannily recall those of Jackie Earle Haley and Matt Dillon, two of her male contemporaries—perfectly embodies fragile bravado; pint-size Cebe’s bluster is often negated by her habit of sucking her thumb. “She wants to grow up so fast,” her unstable mother sobs to a court-appointed psychologist (played by Raymond Burr, the square star of TV’s Perry Mason and Ironside whose brief appearance in this scabrous movie only enhances its jagged appeal). Cebe’s most violent act will also turn out to be her most perversely mature one.

Out of the Blue premiered two years after Manz, born in 1961, made her screen debut in Days of Heaven (1978), written and directed by Terrence Malick, another New Hollywood luminary. Like Hopper, Malick reconfigured his 1916-set film to foreground the gifts of his fascinatingly feral young star, who plays the little sister of Richard Gere’s Bill, a Chicago laborer who hatches a scheme with his girlfriend in the Texas Panhandle. While trying to figure out the flow of his movie during a protracted, two-year editing process, Malick came upon the solution to have Manz ad-lib voice-over narration while watching the assembled footage. Her stream-of-consciousness reflections—“I met this guy named Ding-Dong. He told me the whole earth is going up in flames”—temper Malick’s gauzy, mythopoeic images with a wildly unpredictable flintiness. 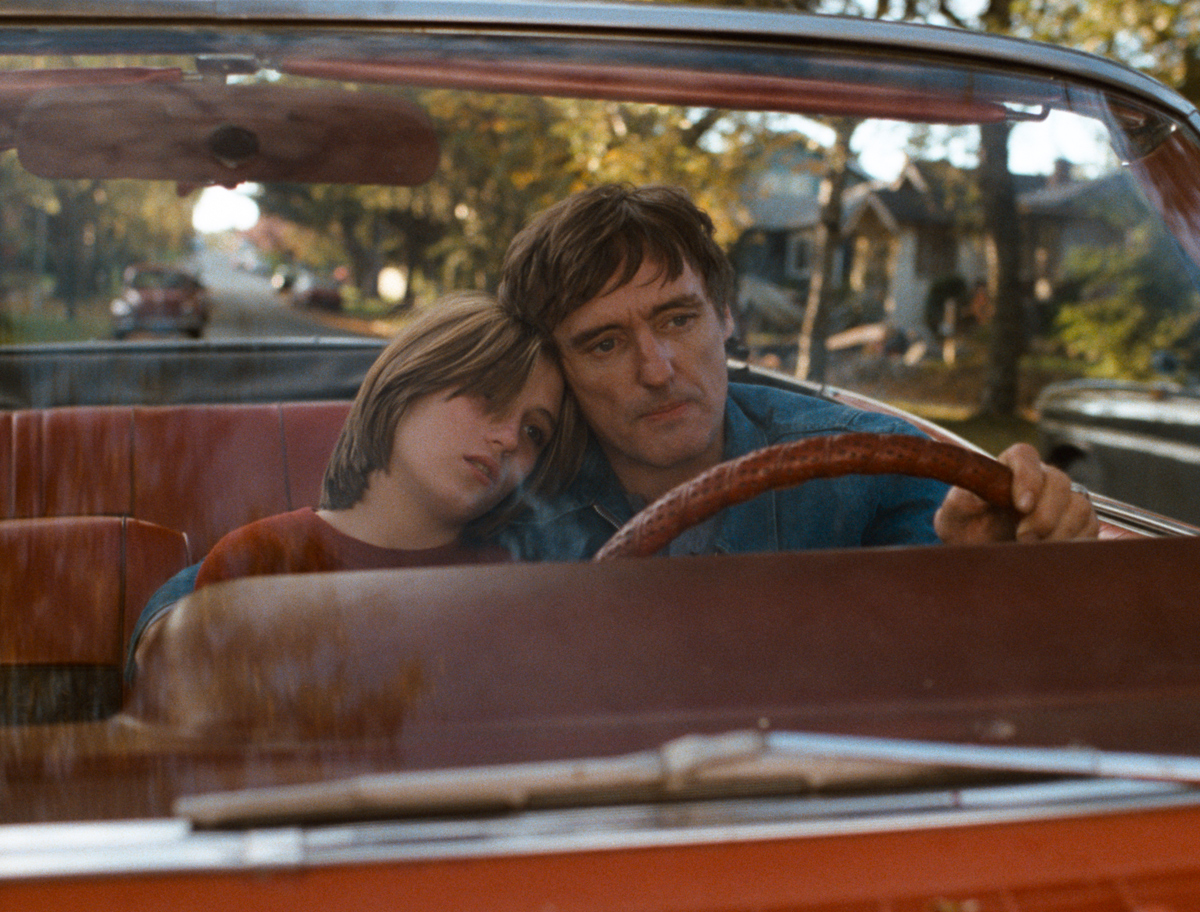 In tailoring Out of the Blue to better showcase Manz, Hopper gave her ample opportunity to display her lightning-quick responses in scenes that appear largely improvised. That’s especially the case whenever she shares the frame with Hopper, who, except for the prologue described above and a brief episode when Kathy and Cebe visit him in the penitentiary, is absent from the film’s first half, reappearing when Don is released from jail. Hopper made the film while still in the depths of his various addictions, yet the dark shambolic energy that both radiates from the actor and suffuses every minute of Out of the Blue never once overwhelms Manz. She matches Hopper’s maniacal laughter with her own otherworldly blend of childish giggle and adult guffaw; every one of Don’s outrageously inappropriate remarks is met by Cebe with extreme nonchalance—a strategy that will implode spectacularly. 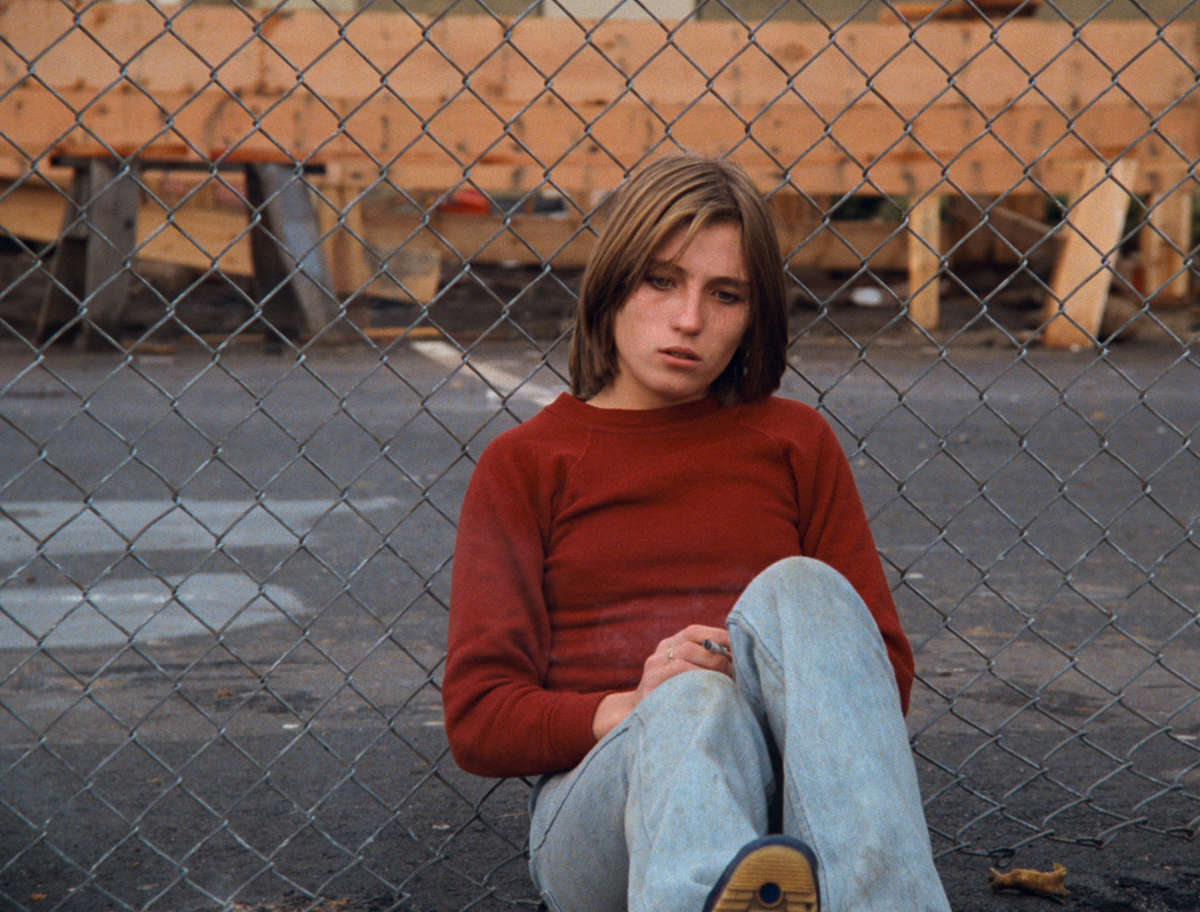 Linda Manz as Cebe in Out of the Blue. Photo: Discovery Productions.

Manz, who died at age fifty-eight in 2020, ten years after Hopper, made just a few more films after Out of the Blue before retiring from acting for good in 1997. In this 1980 movie, the creation of a man drawn to flames, her fire will never be extinguished.