Film
Room at the Top 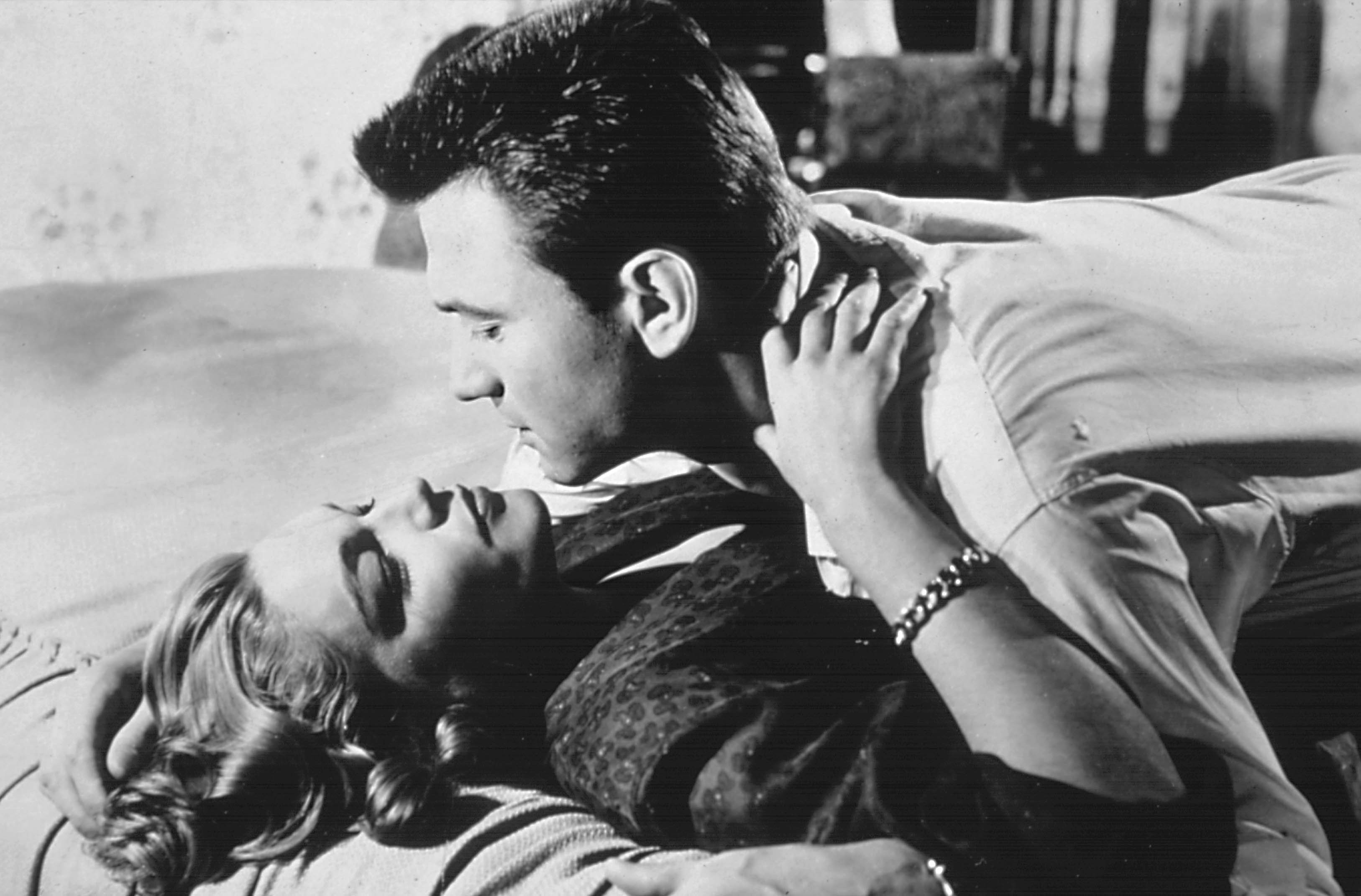 Simone Signoret as Alice Aisgill and Laurence Harvey as Joe Lampton in Room at the Top. Image courtesy Kino Lorber.

Room at the Top, directed by Jack Clayton, available to buy or rent at Kino Now

One of the bleakest movies I know, Jack Clayton’s Room at the Top (1959) also ranks among the sultriest: a wildfire smoldering in a desolate landscape. The film—often cited as the first in the British New Wave movement, which centered on stories about the struggles and miseries of the working class—follows the angles, acute and obtuse, of a trigon.

Joe Lampton (Laurence Harvey), a lowly civil servant newly arrived to the northern town of Warnley from the even grimmer burg of Dufton (both places are fictional; location shots were filmed mainly in West Yorkshire), is determined to win over Susan Brown (Heather Sears), the chaste daughter of Warnley’s biggest baron. But while the striver aggressively pitches woo—Joe’s hounding of Susan motivated as much by genuine attraction as by ladder climbing—he begins a passionate affair, one untainted by mercenary motives of any sort, with Alice Aisgill (Simone Signoret), a Frenchwoman a decade his senior stuck in a dismal marriage to a man who takes sick pleasure in humiliating her with his own philandering. During their stolen afternoons and evenings together, Joe and Alice experience carnal and spiritual bliss—they are perhaps the only two people in Warnley relieved, however fleetingly, of the town’s pervasive grimness. Of course, their ecstasy cannot last, their transporting love crushed by not only the might of the UK’s caste system but also the garroting codes of gender roles and their attendant misogyny. 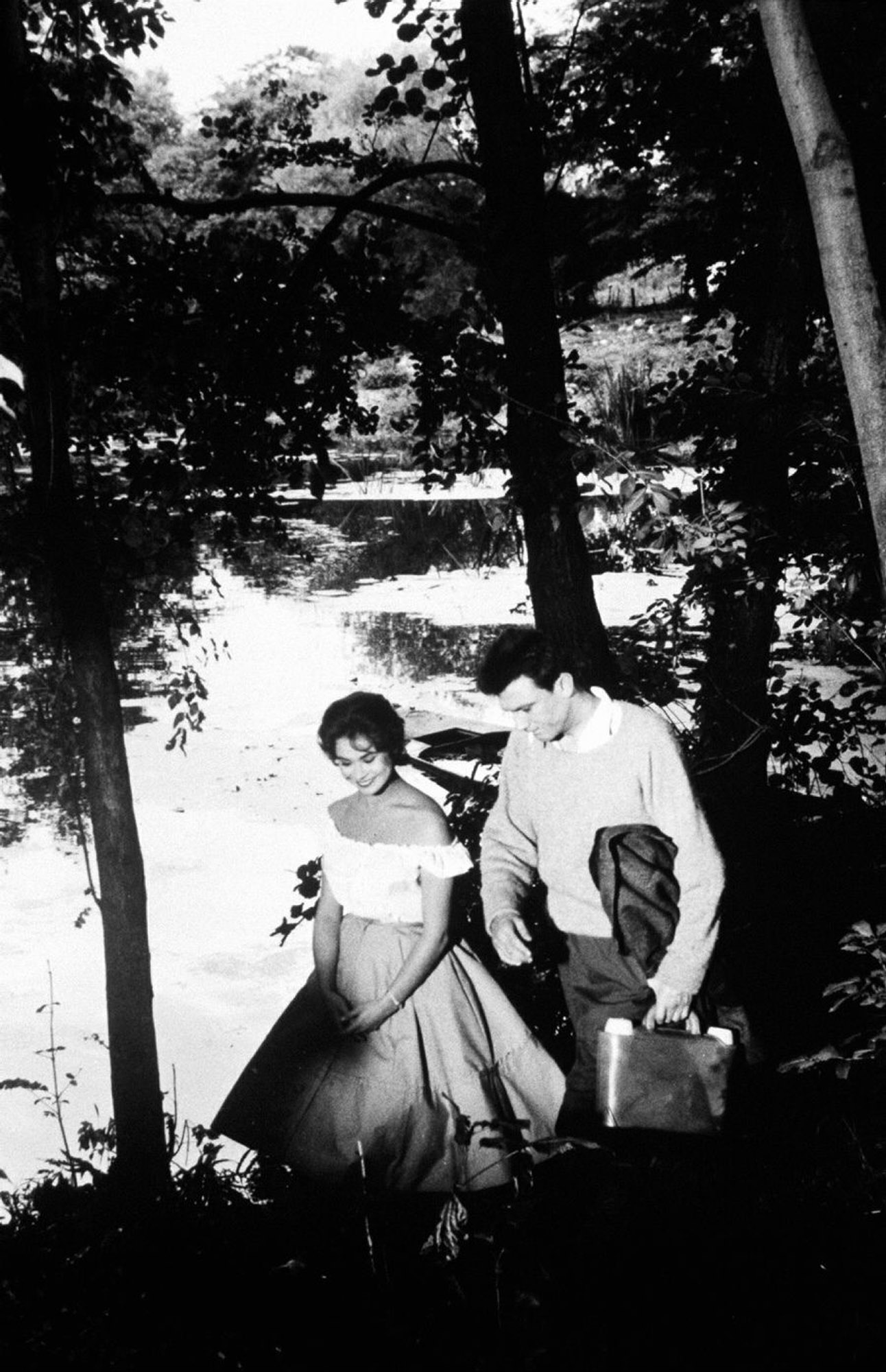 Heather Sears as Susan Brown and Laurence Harvey as Joe Lampton in Room at the Top. Image courtesy Kino Lorber.

Based on a 1957 bestselling novel of the same name by John Braine, a second-tier member of the “angry young men” writers who ascended in Great Britain in the ’50s, Room at the Top marked the feature directing debut of Clayton, who would go on to helm The Innocents (1961), a supple adaptation of Henry James’s The Turn of the Screw, and a taxidermic screen-transfer of The Great Gatsby (1974). Room at the Top remains Clayton’s top, largely owing to the way that the director, working with cinematographer Freddie Francis, deftly showcases the lust-drunk faces and entangled bodies of Joe and Alice. The critic Andrew Sarris once wrote that Elizabeth Taylor and Montgomery Clift, the stars of George Stevens’s A Place in the Sun (1951), were “the most beautiful couple in the history of cinema” and that watching “those gigantic close-ups of them kissing was unnerving—sybaritic—like gorging on chocolate sundaes.” To gaze at Harvey and Signoret, each possessed of an unconventional allure, in the same frame proves a much less cloying experience—more akin to slurping down oysters from a bed of rapidly melting ice than a sugar rush. (Perhaps the best food analogy for Harvey can be found in the title of a film he headlined in 1968: A Dandy in Aspic.) 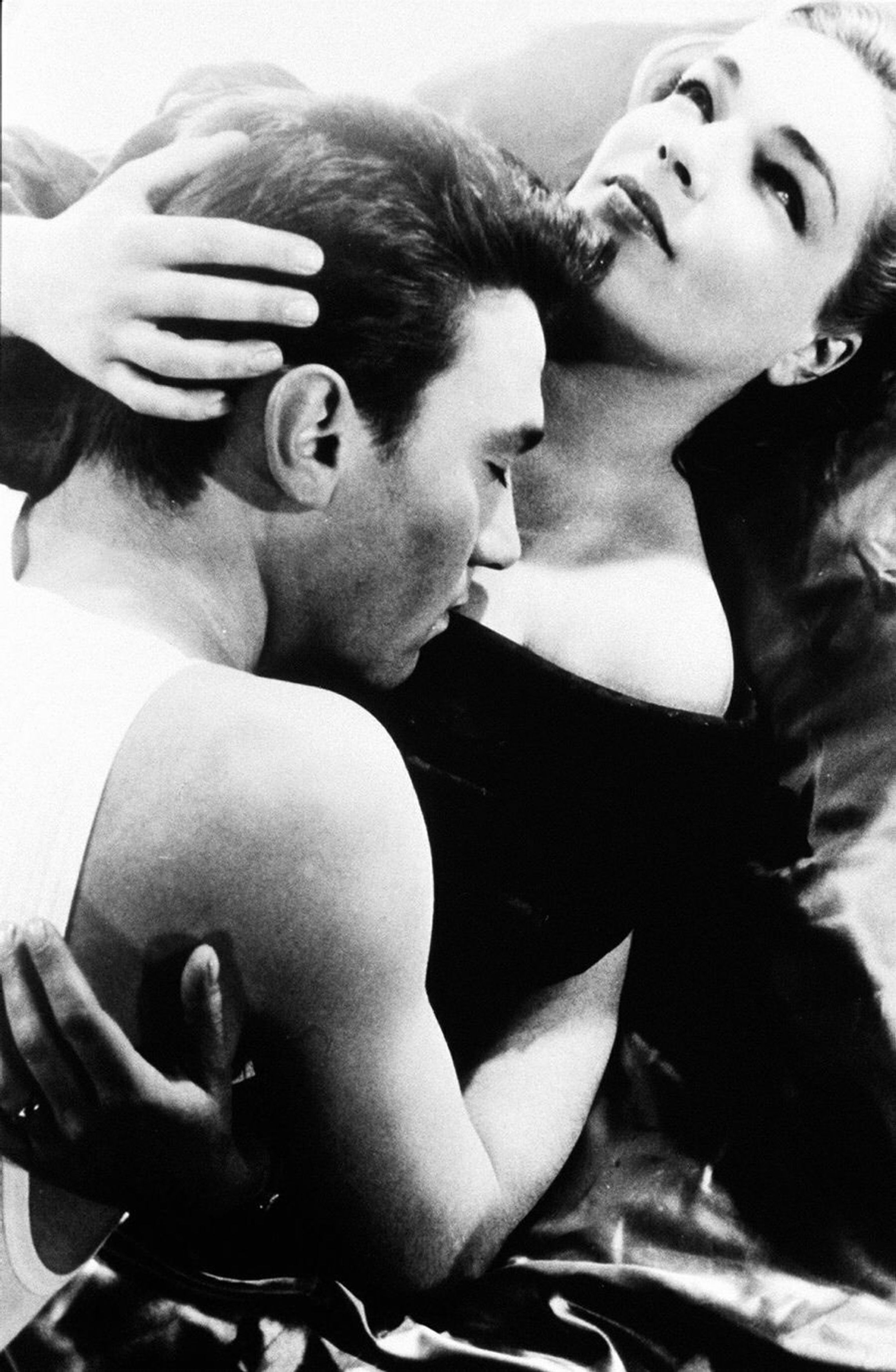 Laurence Harvey as Joe Lampton and Simone Signoret as Alice Aisgill in Room at the Top. Image courtesy Kino Lorber.

Both Harvey and Signoret had been making movies for more than a decade by the time of Room at the Top’s release. But the film was a breakthrough for each. For Harvey, Joe Lampton served as the rough draft for his signature character, the nattily attired lothario. Harvey’s posh executive Weston Liggett in BUtterfield 8 (1960) and louche advertising magnate Miles Brand in Darling (1965) are Joe with a plummier accent and a fatter checking account. For Signoret, the movie gave the French performer her widest international audience and a best-actress Oscar, an award rarely given to those for whom English is not their native tongue.

Harvey wasn’t always a generous screen partner; Jane Fonda, who costarred with him in the lurid Big Easy melodrama Walk on the Wild Side (1962), said of the experience: “There are actors and actors—and then there are the Laurence Harveys. With them, it’s like acting by yourself.” But he and Signoret have a galvanic connection, an alternating current of tenderness, understanding, and desire. Joe likes to think of his relationship with Alice as that of “loving friends”; a similar sense of comity informs Harvey and Signoret’s dynamic. 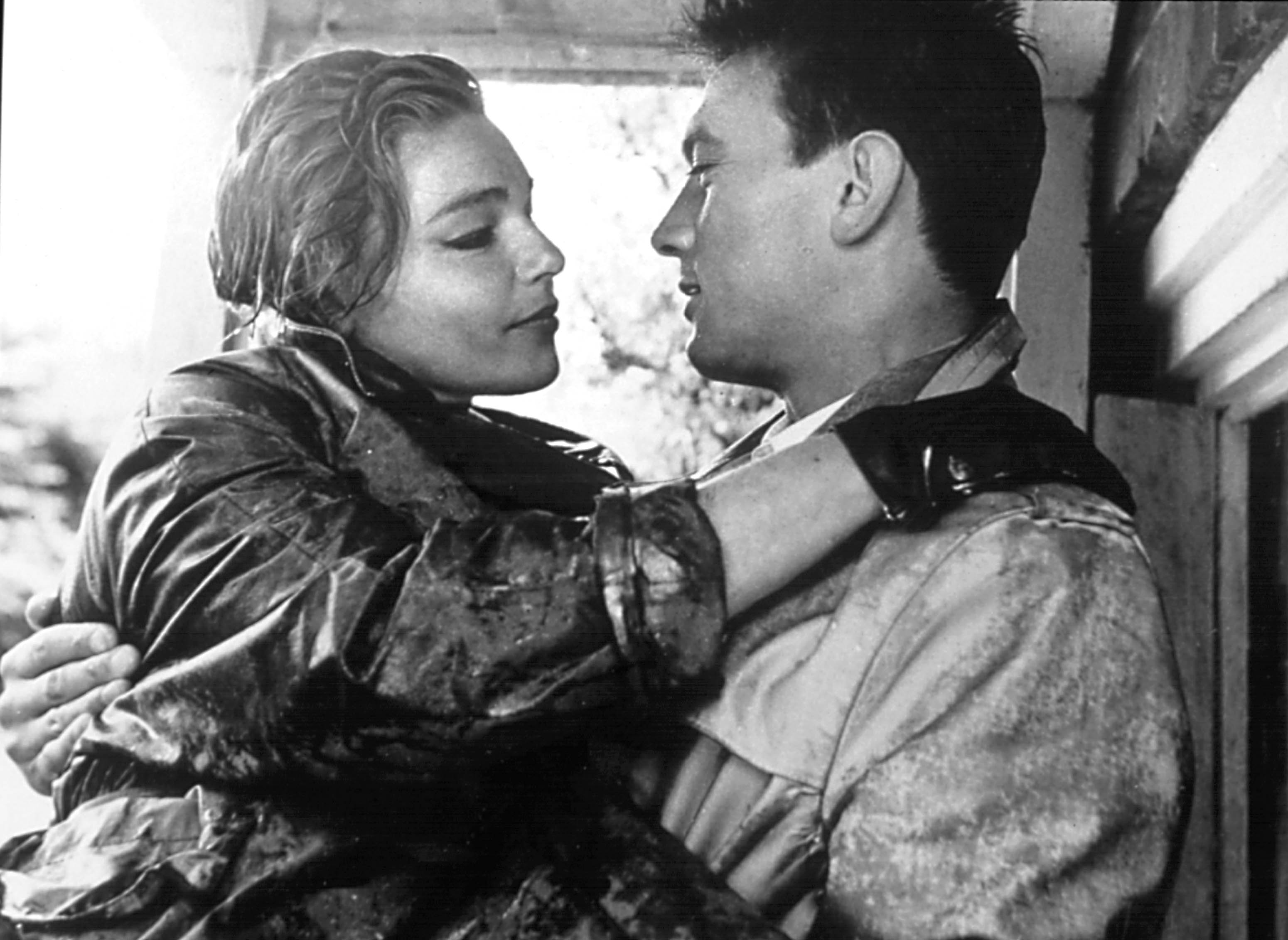 Simone Signoret as Alice Aisgill and Laurence Harvey as Joe Lampton in Room at the Top. Image courtesy Kino Lorber.

Further deepening their roles are traces of autobiography, even if proleptic. Joe’s rabid desire for reinvention, his refusal to resign himself to the class he was born into—“I’m entitled to be in love with any girl,” he says to all those who scoff at his pursuit of Susan—recall the vigorous efforts by which Larushka Mischa Skikne, born in Lithuania in 1928, became Laurence Harvey, the epitome of Brit suavity. Only thirty-seven when Room at the Top opened, Signoret easily looks ten years older; the actress’s self-possessed mien, her gloriously heavy-lidded face enhance the sense that Alice has inured herself to any hurt. In 1975 Signoret published one of the most superbly titled memoirs, Nostalgia Isn’t What It Used to Be, a world-weary line that I could imagine Alice murmuring to Joe. Even more powerful is her retort to Joe after he erupts in a jealous rage upon learning that she once modeled nude for an artist. Castigating him for his “beastly little provincial mind,” she declares, “I own my own body.” But however indomitable she appears, Alice is crushed when Joe tells her he is marrying Susan; might her crumpled reaction have been mirrored by Signoret herself a year later when her beloved spouse, Yves Montand, had a very public affair with Marilyn Monroe? 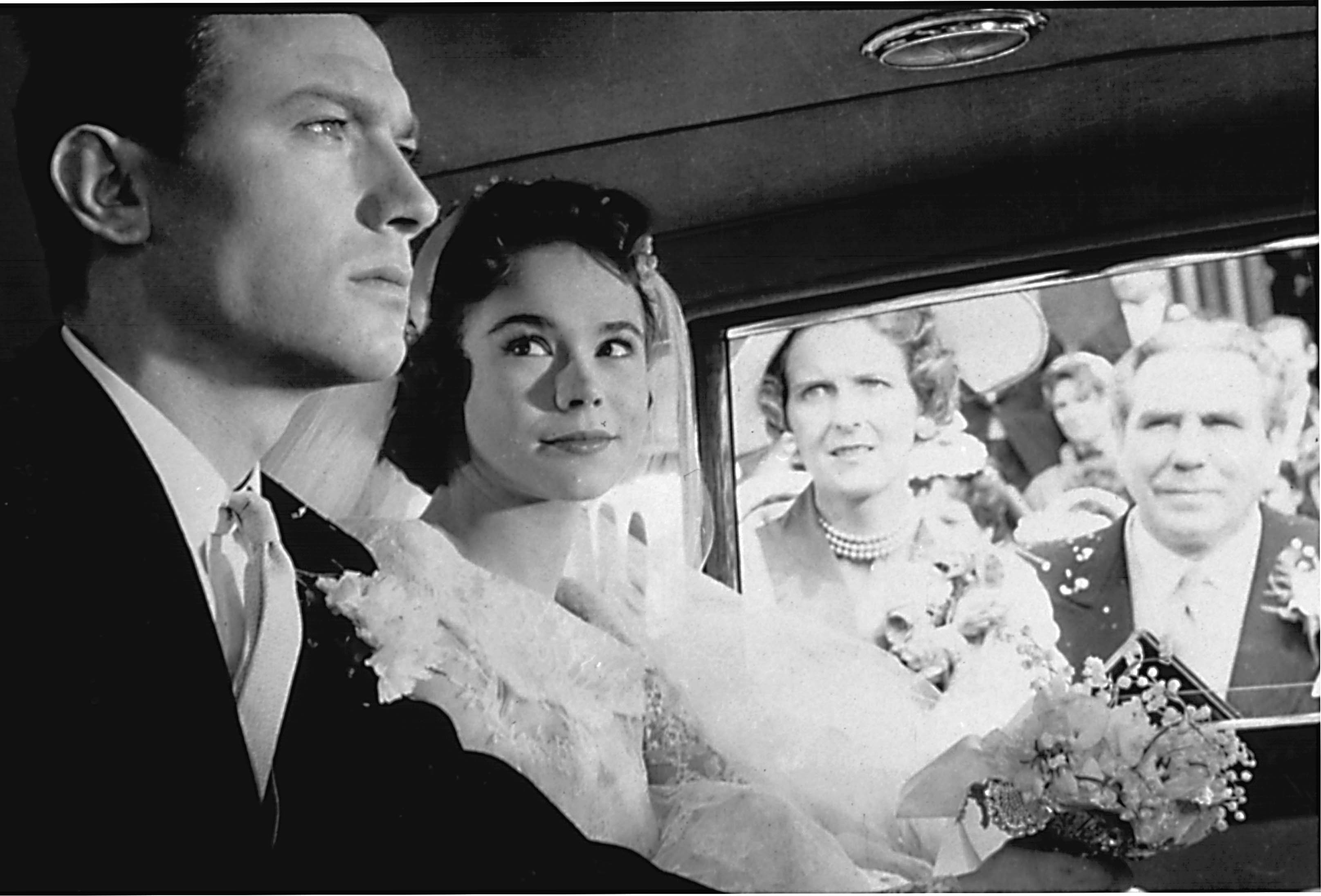 Laurence Harvey as Joe Lampton and Heather Sears as Susan Brown in Room at the Top. Image courtesy Kino Lorber.

“There is always something vulgar about a triangle,” Elizabeth Hardwick wrote in an essay on Ibsen—a piece composed in 1971, shortly after her husband, Robert Lowell, left her for Caroline Blackwood. “The victors are degraded by slyness, corruption, and greediness; the loser by weakness and humiliation.” But the victors in Room at the Top are indistinguishable from the losers. Joe is forced to wed Susan, who’s carrying his child, by her father or face utter ruin by the tycoon; what’s more, Joe must now work for the man. Walking down the aisle, Joe marches to his death; Alice, referred to by various Warnley residents as “all woman” or “an old whore,” has already met her actual demise. The concluding line of Hardwick’s essay is the perfect coda for this gutting movie: “In the end, nothing will turn out to have been worth the destruction of others and of oneself.”