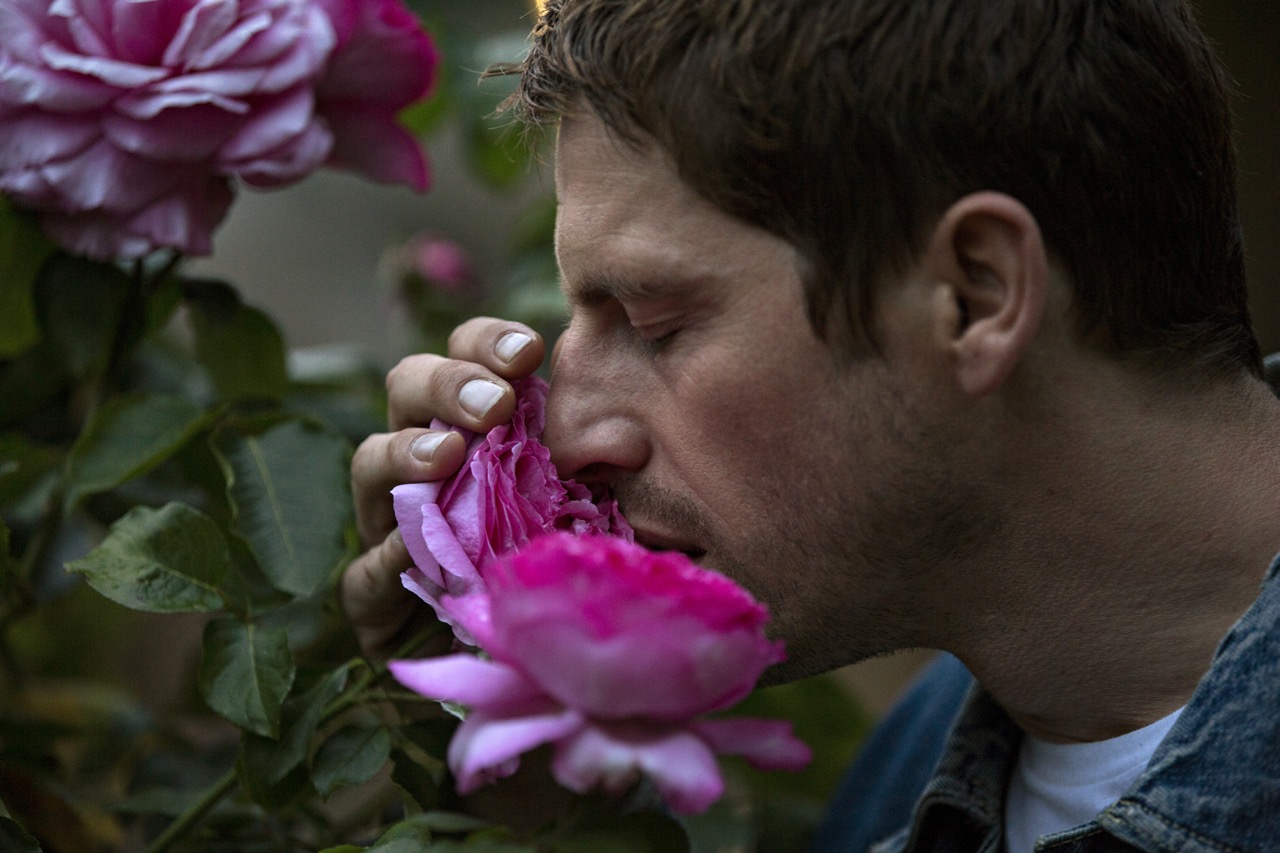 When filmmakers look back, ideally their hindsight won’t be 20/20. For a movie to meaningfully re-create the past, especially recent decades, period specifics need to be judiciously, not obsessively, evoked. Too much fussy attention to detail deadens a film, turning it into a diorama. French writer-director Christophe Honoré’s 1993-set Sorry Angel—which played in competition at Cannes and was a main-slate selection of the New York Film Festival last year—concerns several dynamic topics, namely intergenerational romance and love among men during the height of the AIDS pandemic. Yet it rarely plays like a film about churning, ungovernable life. It is instead a precious, inert gloss on lifestyle.

Hailed, by his compatriots at least, in the mid-2000s as a talent recalling the greats of the Nouvelle Vague, Honoré has often struck me as an ersatz romantic. He’s best known in the US for Love Songs (2007), a wan musical meant to be a tribute to Jacques Demy, whose melancholy The Umbrellas of Cherbourg (1964) and exuberant The Young Girls of Rochefort (1967) remain the pillars of the genre in France. Honoré’s Beloved (2011) is an even more disastrous musical, in all senses: the movie includes some jaw-dropping 9/11-sploitation. Both Love Songs and Beloved abound with love triangles, sexually fluid characters, and bad lyrics (from Beloved: “London calling / But who / I can’t say”). When the performers break into song, the action reflects not so much a surfeit of emotion, as with the most transporting musicals, but a shrug, a snit, a pout. 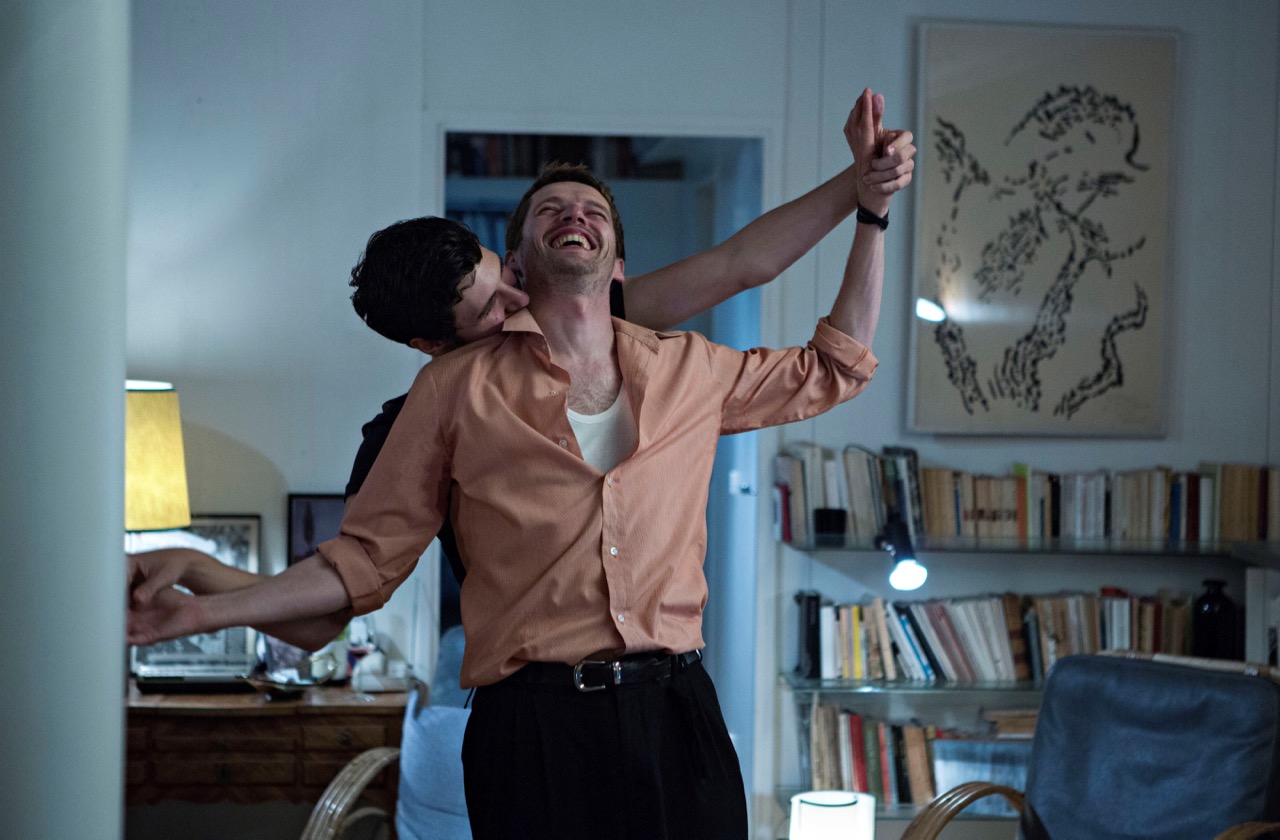 Sorry Angel isn’t a musical, but it is aurally dense. Pop songs—from a variety of idioms and most spanning 1985 to 1991—are cued up seemingly every five minutes. The film opens with Massive Attack’s “One Love,” a trip-hop ode to monogamy that scores our first glimpses of the two men, each presented via a series of smash cuts, who will become the central couple. After this sonic salvo, we get to know the older of the two lovers: Paris-based Jacques (Pierre Deladonchamps), a thirty-five-year-old, HIV-positive writer of some renown whose apartment houses or welcomes an assortment of kin, friends, and exes. His precocious grade-school-age son stays with him every other day; his upstairs neighbor, the gay fifty-something Mathieu (Denis Podalydès), a culture journalist, works on his articles in the flat while babysitting Jacques’s kid; Marco (Thomas Gonzalez), a former lover severely weakened by AIDS-related complications, moves in. It’s a busy place. But what I remember most about the bobo spread is the item that assumes talismanic significance: the Andy Warhol–designed poster for Rainer Werner Fassbinder’s final film, his 1982 adaptation of Jean Genet’s Querelle. (The camera lingers even longer on an advertisement outside a theater for Robert Wilson’s Orlando, with Isabelle Huppert—the actress who would play the title role in Honoré’s second feature, 2004’s Ma Mère.) 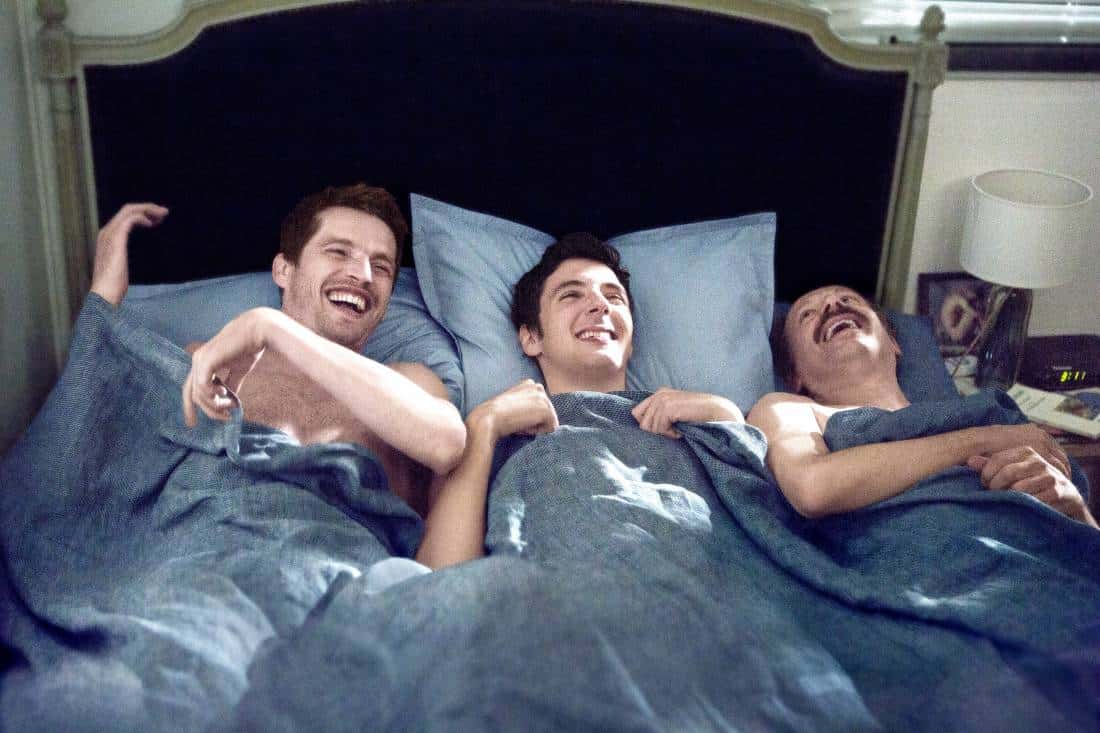 The sacralized Querelle poster—a salute to a troika of homo heroes—is near another consecrated objet, the stereo. Throughout Sorry Angel, Honoré pays close attention to the slow open and close of a CD drawer, the drop of a needle on an album. Jacques loads a Stan Getz disc to accompany an aria of self-pity, swaying around his living room while he complains to Mathieu about his desultory love life and the price of a couch he covets. The writer is sensitive to decor; he is appalled by the hotel room that’s been booked for him in Rennes, where one of his plays is being produced. Walking into a cinema in the Breton capital city—a perambulation that occasions, at least twice, a glimpse of an announcement for an upcoming appearance by the Britpop band Suede—Jacques cruises twenty-two-year-old Arthur (Vincent Lacoste) during a screening of Jane Campion’s The Piano. Jacques somehow doesn’t lose interest despite Arthur’s corny boast (“I like to read”), and the younger guy is turned on by the older one’s passive-aggressive pickup line: “I hate your generation for being cuter than ours.” (Born in 1970, the openly gay Honoré, like Arthur, is a member of Gen X and hails from Brittany.) 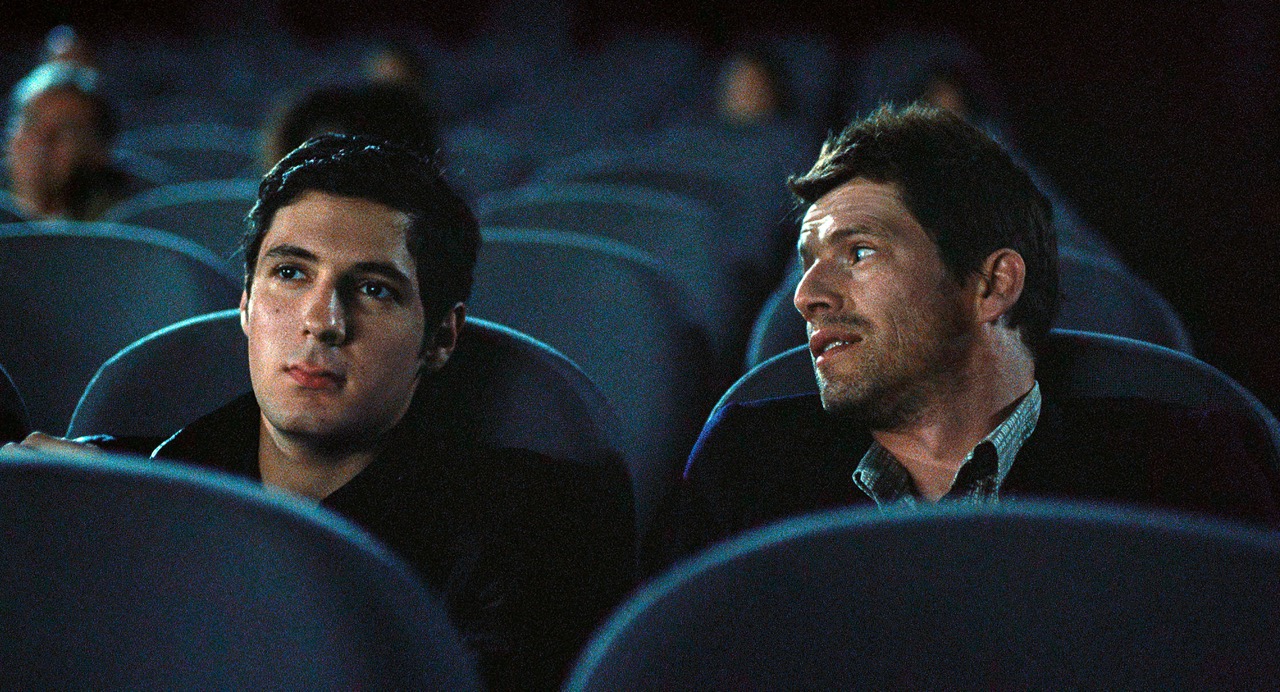 That feeble flirty banter characterizes the faint sexual chemistry shared by the two men. The most erotically charged scene in Sorry Angel is its strangest, occurring shortly before the initial encounter of the age-discordant lovers. A still-closeted Arthur, after a quarrelsome day spent with his girlfriend, heads to a local cruising spot; an admirer, standing behind Arthur, lifts the twink’s shirt up and gives his taut tummy a lusty, slow slap.

In that brief segment we glimpse what is otherwise wholly missing from the film: a sense of the anarchy of desire, of irrepressible urges, of vitality. By the time Arthur arrives in Paris to visit Jacques—their long-distance courtship had been carried out through phone calls and letters until then, with each man enjoying the company of additional bedmates—Sorry Angel has become as dozy as the dream pop (the Sundays, Cocteau Twins) on the soundtrack. Emotional chaos and sorrow is always held at a delicate remove; when Marco, a character in extreme physical distress, speaks about his agony, his words have the hollow ring of a sub-Wildean quip: “It’s already too late to die young.” 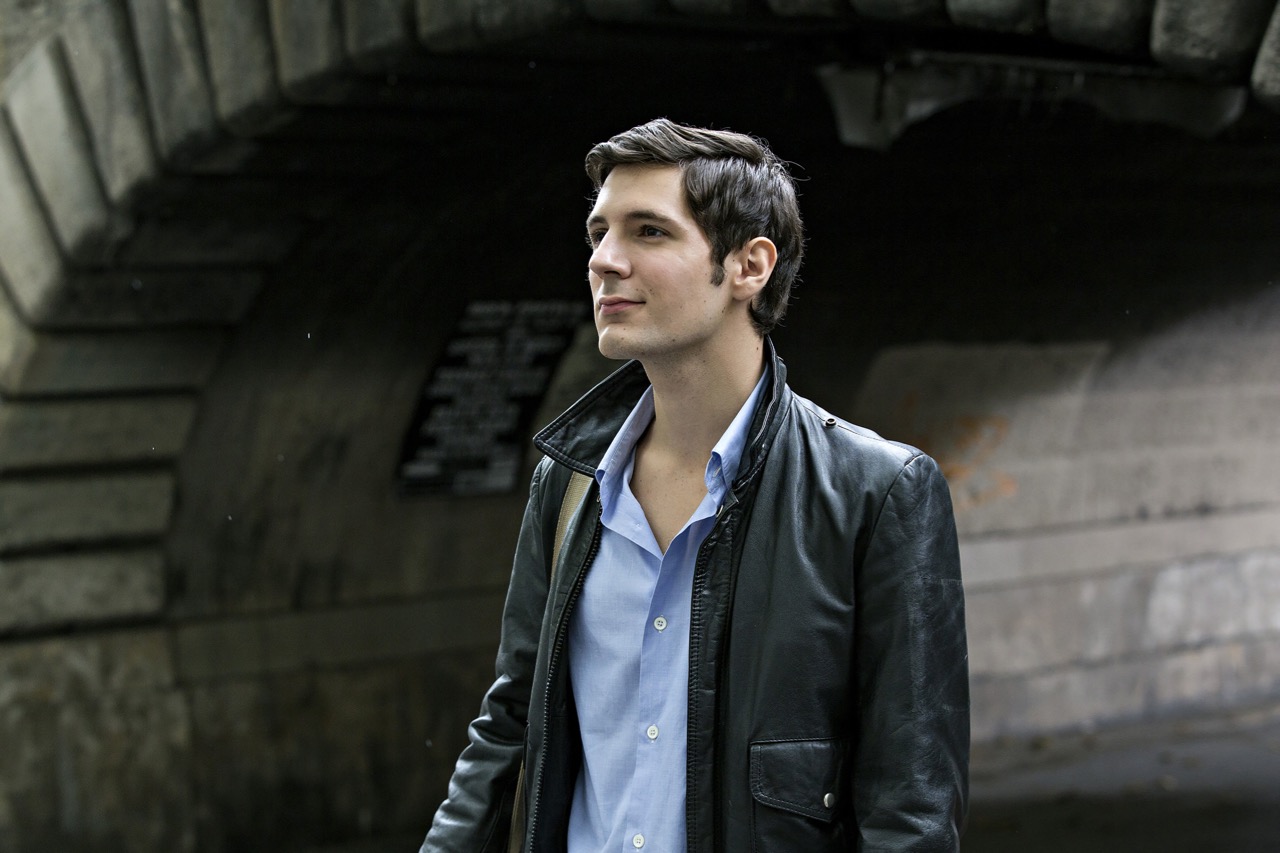 While in the French capital, Arthur has two items on his tourist wish list: to visit the Centre Pompidou and to attend an ACT UP meeting. He accomplishes the first; we see him gazing at Picasso’s Harlequin (1923), though the painting seems to hold less auratic power for Honoré than the ’80s and ’90s ephemera strewn throughout his movie. As for the second, it’s never mentioned again—that is, after this snide remark from Mathieu to Jacques: “For a Breton queer in Paris, an ACT UP meeting is as exciting as the Catacombs.” (To tweak the direct-action group’s famous slogan, sometimes talk equals death.) The explicit mention of the activist coalition summons memories of BPM, Robin Campillo’s electrifying 2017 movie about ACT UP–Paris. BPM also takes place in the early ’90s but does not wallow in nostalgia. For all of Honoré’s lavish adoration of analog artifacts and the IRL era, Sorry Angel has the heft of an Instagram Story.