The path not taken: a look back at the noted gallerist’s early photography. 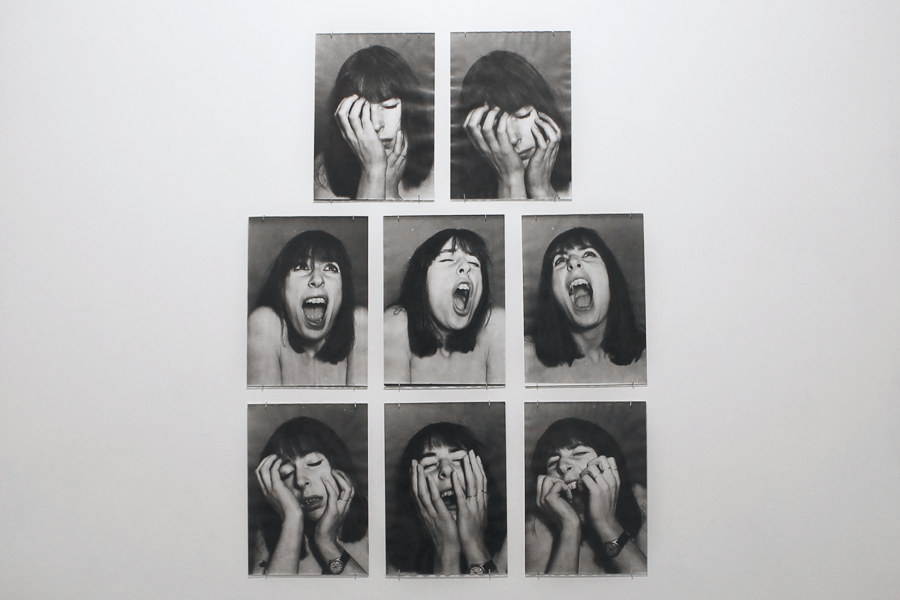 Janice Guy: A Foot in the Mouth of Art, 1975–1981, installation view. Image courtesy the artist and Higher Pictures.

In 2017, the Murray Guy gallery in Chelsea closed, shortly after I’d moved to New York, and I felt a sheepish nostalgia for something I only knew through reading and conversation, failing to have made a visit when I had the chance. For eighteen years, Margaret Murray and Janice Guy had been a formidable force, promoting the work of powerful artists I admired, many of them women who employed photography and film, like Rosalind Nashashibi and An-My Lê—the gallery’s passion born, it turns out, at least in part from Guy’s own early experiments with the lens, which are now on view in an exhibition at Higher Pictures.

A Foot in the Mouth of Art, 1975–1981 presents Guy’s student-era work: black-and-white photographs (some hand-colored in places, and most arranged in series) rushing in strips across the walls of the small gallery, or stacking on top of one another to form lopsided grids; all feature Guy herself, vulnerable and seeking. Looking at them, I again felt that peculiar temperature of misplaced nostalgia; there is a melancholy in seeing an exhibition nearly forty years late, the beginning of a path that wasn’t taken, like that awkward tenderness you have for your former, half-grown selves, and what they could have become. 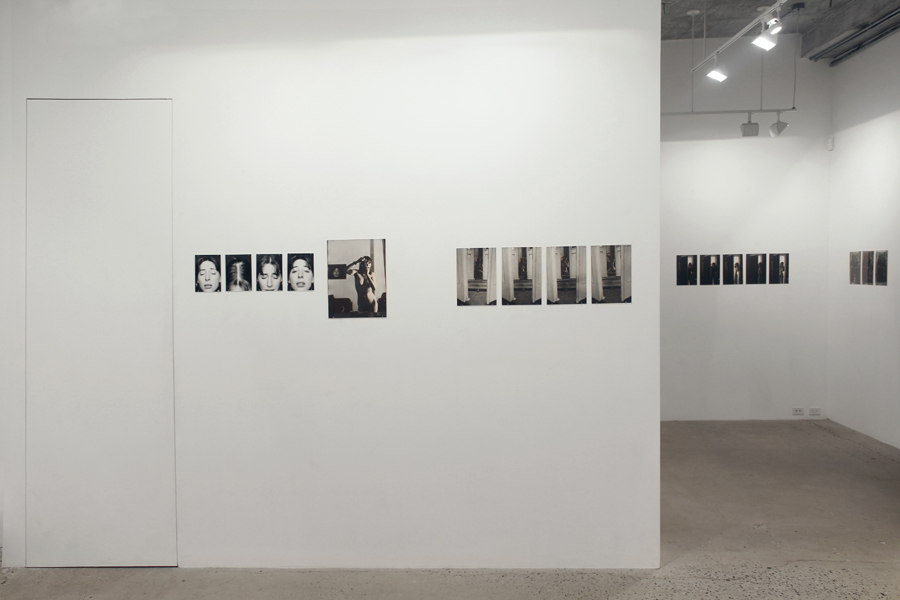 Janice Guy: A Foot in the Mouth of Art, 1975–1981, installation view. Image courtesy the artist and Higher Pictures.

The timing of this show might make it seem like Murray Guy’s closure is what kindled interest in Guy’s own artwork, but in fact this interest has been percolating in fits and starts for more than a decade. In 2007, artist Marilyn Minter proposed a show at the alternative space White Columns that would exhibit the erstwhile art practices of prominent gallerists. Alongside the likes of Jeffrey Deitch and Gavin Brown was Guy, to the surprise of many, showing her 1970s photographs for the first time in America. They were striking, and came with a charming story, having been uncovered in the storage of noted photographer Thomas Struth, Guy’s friend and former classmate, who unbeknownst to her had for decades preserved all of the prints and negatives she left with him when she decamped for Italy after art school. White Columns followed up with a 2008 solo show expanding on the material; in 2015, Brooklyn’s Cleopatra project space organized another exhibition of the work, which in turn was followed by a monograph published in 2018, with essays by Struth and Justine Kurland. The show at Higher Pictures (located in a tony, imposing building on the moneyed Upper East Side) marks the first time the photos have been shown in a conventional commercial gallery space, one whose impressive setting and roster of artists (from exciting young photographers like Aspen Mays to historic icons like Brassaï) lend a glow of marketplace legitimacy—a legitimacy the gallery has deployed to great effect in its longstanding efforts to champion the work of underrepresented women artists.

The images on view are all of Guy posing for herself in ways that, the press release insists, are meant to disrupt the male gaze. Such is presumably the aim of the first work the viewer meets, an untitled series from 1976, arranged in an unstable grid of nineteen gelatin silver prints, read from the upper left corner down to the bottom right, like a page in a book. Guy’s face is painted a clownlike white, her wide dark eyes looking into the camera with a gentle affect. From photo to photo, black X’s start to mark her cheek, her chin, her forehead, getting larger and larger, until her entire face is scribbled out, only her calm, unblinking eyes remaining legible. Further in the room, another series of four images from the same year shows Guy making herself cry, and elsewhere again, screaming and contorting her features in mock rage. Throughout the show, her face is treated like a plastic material prime for rearranging. 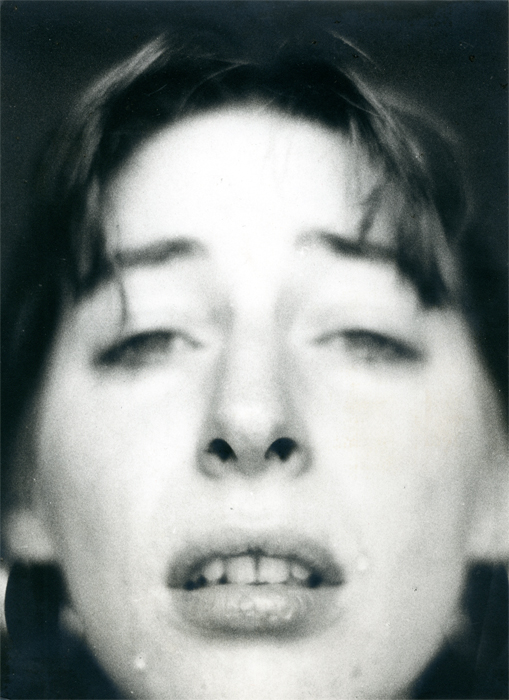 These examples were made a year after Guy got herself out of economically depressed northern England and headed to Germany on a DAAD grant to enroll at the Düsseldorf Academy, where she ultimately studied under the storied duo Bernd and Hilla Becher. Rather than sharing their fascination with the external world’s industrial structures, Guy’s focus lingered on the architecture of her own self-image. She photographed herself in mirrored surfaces, nude, back arched, face eclipsed by the camera, often framed by doorways or windows. In one especially convincing trio from 1980, Guy balances two mirrors on top of each other and captures her body in their doubled surfaces, creating swaying, attenuated torsos, a duplicated pair of hips—chimerical bodies, like strange giraffes. 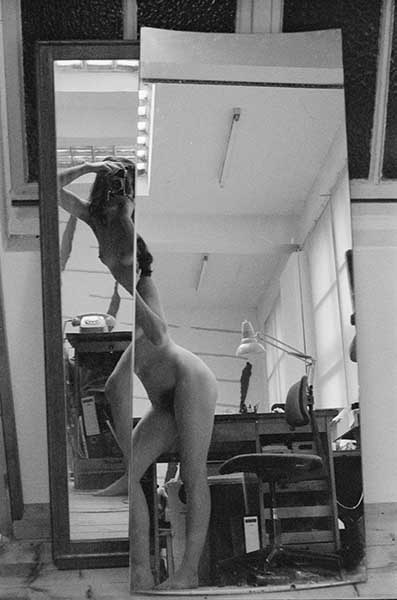 Her hands are important, too, like when she makes a frame with the OK sign, thumb and forefinger pinched together in a circle through which she aims her camera in a series of eight photographs from 1979; it reminds me of a kid’s impulse to hold their fists up to their eyes like pretend binoculars and peer through them, trying to tighten their focus on a world that’s too big. That childish playfulness is also seen in five photos from 1977 in which Guy lays back, her eyes closed, enjoying a sunbeam, while she casts abstract shadows over her face and neck with her hands or camera—only here there’s also something casually menacing lurking under that playfulness, the shadows sometimes looking like a cage or a muzzle locking over her mouth, some sort of weapon pressing down on her neck. 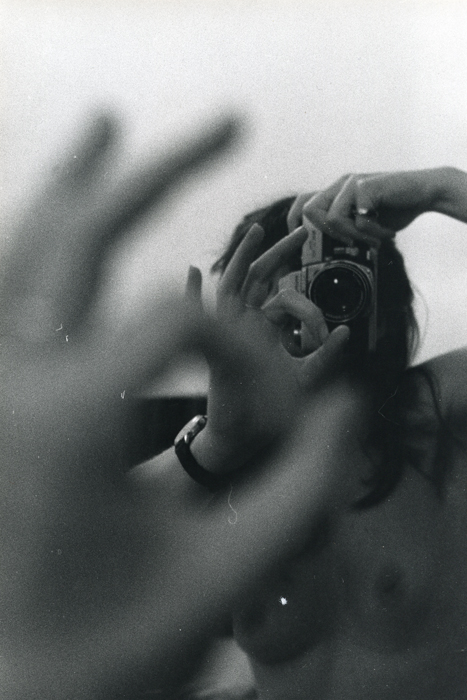 As Martha Schwendener points out in her 2015 review of the Cleopatra show, these photos have much in common with images made by many other young women artists working in the late ’70s and ’80s (and still through today). There’s a subgenre in photography of attractive young women doing weird things to their faces: Ana Mendieta smushing her features against a pane of glass, making lips and cheeks look like lumps of raw animal flesh; Hannah Wilke posing like a magazine model with little chewed up bits of gum stuck to her flawless skin; or more recently, Aneta Grzeszykowska contorting her visage in terrifying-looking beauty masks. In another 1976 series, Guy, her face again painted white, tilts her head back, bandages that are hand-tinted pink again forming X’s over her eyes and mouth, like a graceful and unfunny version of a dead character in a cartoon. In other images in the series she firmly covers up her eyes and mouth with her hands. Unseeing and unseen, prevented from speaking. The intention might indeed be to disturb and disrupt that omnipresent male gaze, but to me these pictures, like those of the women mentioned above, end up reading like proof of the implacability of that gaze—the artists are, in the end, still pretty girls trapped in pictures, registering sorrow and rage and maybe, also, the rascally mischief that counters not being allowed to be fully human. 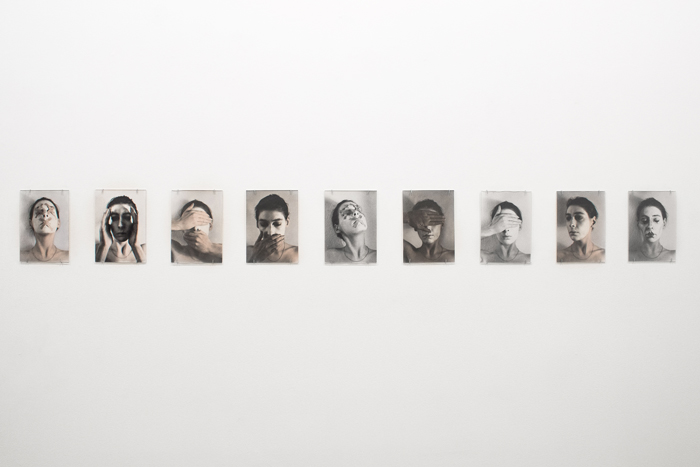 Many of Guy’s images here feel like student experiments, because that’s what they are, but some of them are also so arresting they deserve to be seen as more than just curios, a dealer’s lost first act, whether or not there’s anything particularly novel about their subject matter. (Novelty isn’t actually necessary to make a good image, it should be noted.) The gallery’s decision to show this work now—when the market appetite for “undiscovered” or “underappreciated” older women artists is still rapacious, and the post-#MeToo enthusiasm for earlier feminist art and thought remains vigorous—could seem like an act of savvy calculation. But those market fads also mean viewers might be readier to receive these pictures, perhaps more so now than then, when they got packed up and left behind.