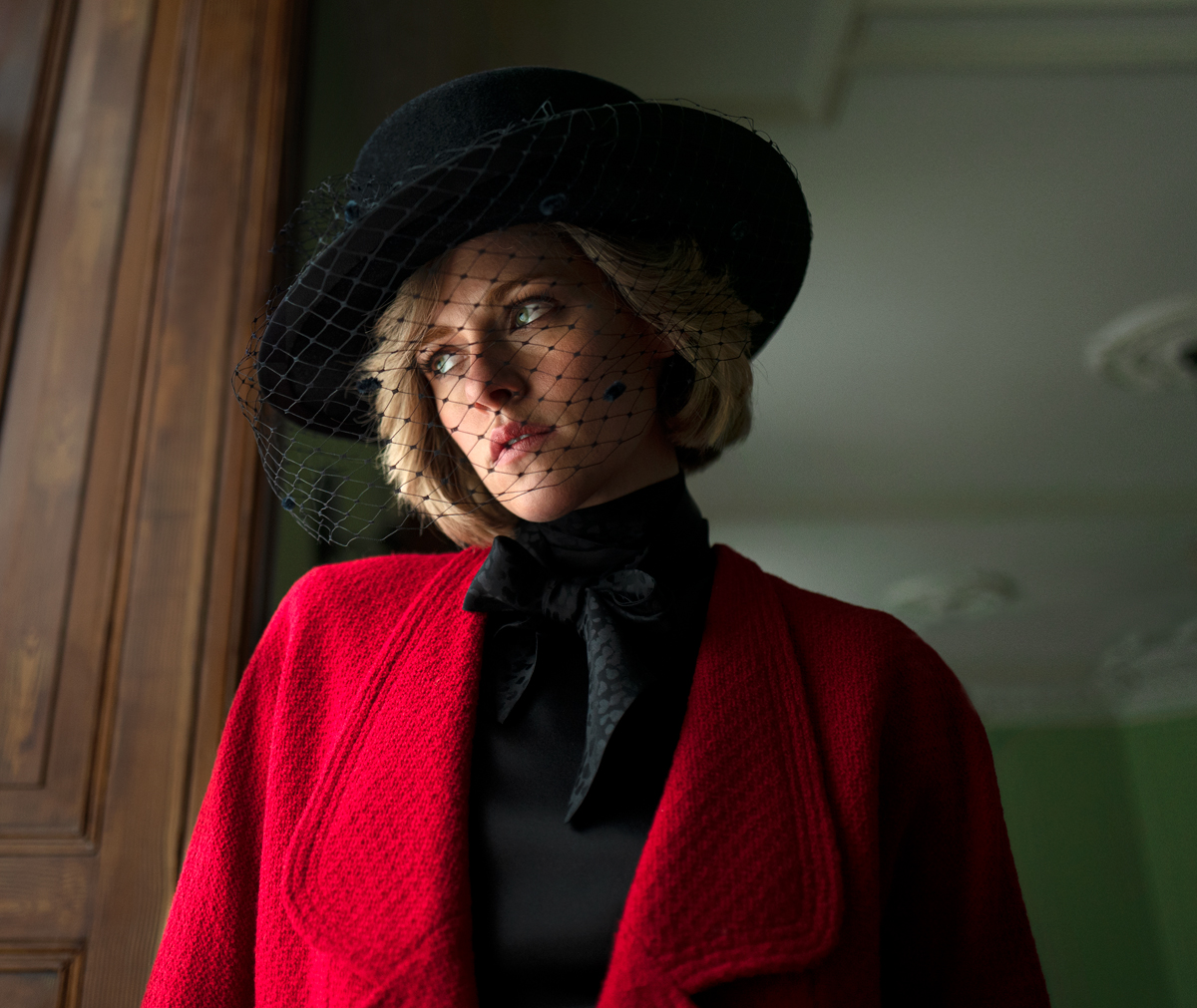 Of all pop-culture pathologies, none has metastasized quite like the fascination with the British monarchy. There is especially no slaking the appetite for details on those within the immediate circle of the woman who has been sovereign since 1952—her coronation ushering in “the Betty Windsor show,” per the satisfyingly acidulous words of Liverpudlian filmmaker Terence Davies in his 2008 documentary-memoir, Of Time and the City. To limit the scope of this obsession solely to feature films, the past fifteen years have given us high-profile biopics about Betty herself (Stephen Frears’s The Queen, from 2006), Betty’s dad (Tom Hooper’s The King’s Speech, 2010), and now, inevitably, Betty’s former daughter-in-law—alias “the people’s princess,” who became a corpse at thirty-six, her premature demise the subject of the worst song ever recorded by Elton John (or anyone) and other maudlin displays of necromania.

When it was first announced last year, I could not imagine a project less appealing than Pablo Larraín’s Spencer, which loftily bills itself in early onscreen text as “a fable from a true tragedy,” and narrows its focus to a despairing three days—December 24–26, 1991—in the life of Diana, Princess of Wales (née Diana Frances Spencer, hence the movie’s title). And yet I couldn’t wait to see it, if only because of my enduring, insatiable enthrallment with the star who was cast, incongruously, to play England’s Rose: Kristen Stewart. The very discordance between performer and role, though, turns out to be one of the more invigorating aspects of a film that spends nearly two hours advancing already axiomatic notions—obscene opulence does not equal freedom; protocol is a prison—with easy ironies, weighty symbols, and portentous phrases. 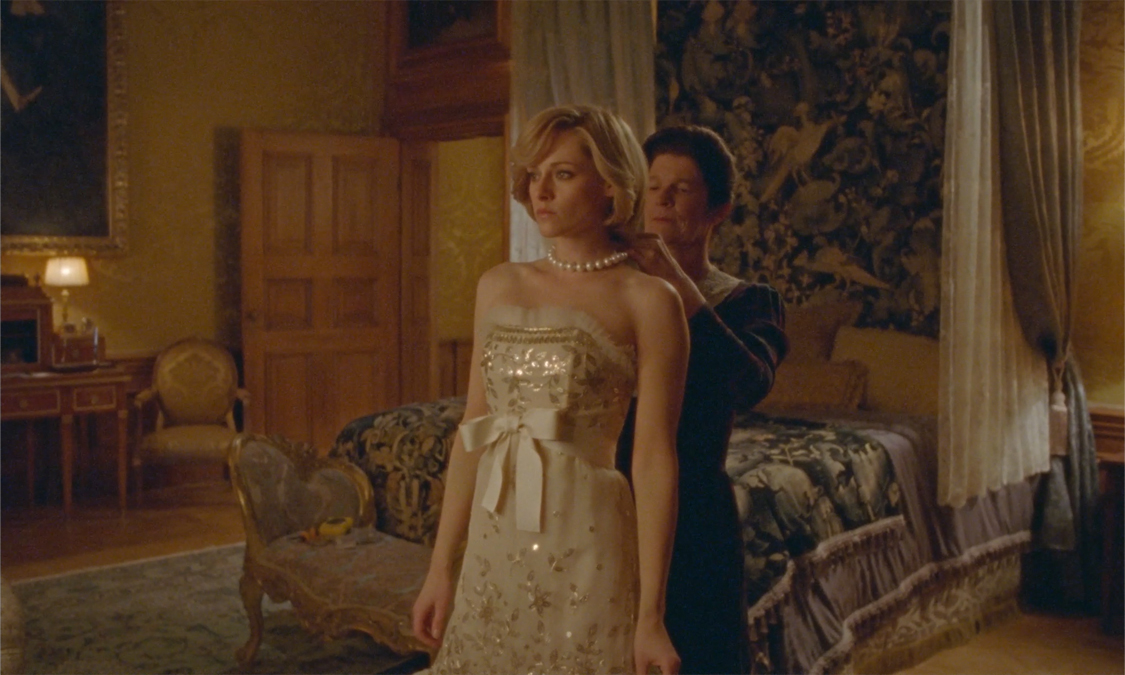 Scripted by Steven Knight, Spencer is Larraín’s third feature to center on a towering twentieth-century figure. In the first, Neruda (2016), the Chilean filmmaker took an oblique approach to one of his country’s most exalted heroes, the poet and politician of the title. (That sidelong strategy also animated Larraín’s great trilogy about the trauma of the Pinochet regime: Tony Manero, 2008; Post Mortem, 2010; and No, 2012). At once a fact-based chronicle, a detective story, and a metafiction, Neruda is devoid of fastidious re-creation—the kind of mimesis that overwhelmed Jackie, also from 2016, and Larraín’s first film in English. It was also his first to star an American A-lister, Natalie Portman, whose baffling portrayal of Mrs. John Kennedy in the wake of the president’s assassination confused narcosis with grief. 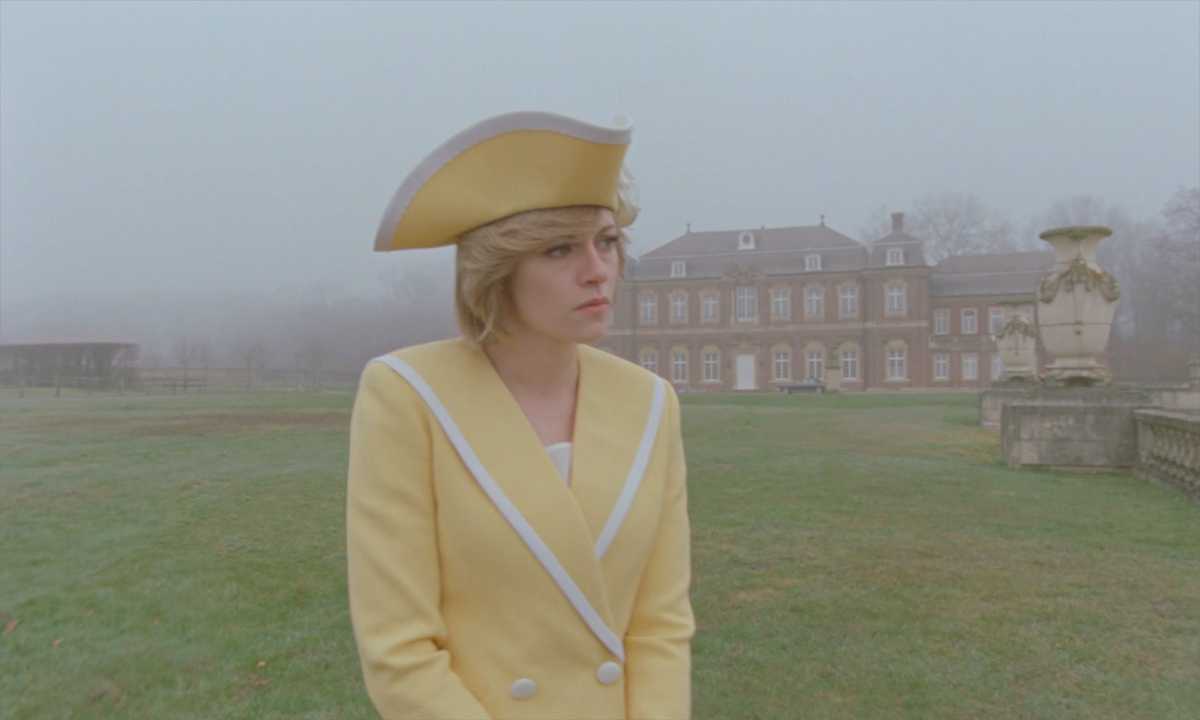 Spencer forms a diptych with Jackie: two female secular saints, both clad in and/or accessorized with Chanel, and each a crucial player in propping up the myths of majesty, with one key difference. Camelot, a term the First Lady deployed to describe her husband’s truncated term in office, was a chimerical metaphor; the royal residences where Diana lived, on the other hand, were all-too-real immurements. Or so Spencer—which takes place at Sandringham House, in Norfolk, where yuletide has long been celebrated by Betty Windsor, here played by Stella Gonet and reduced to a fleeting presence who stares with blank disdain when not summoning her corgis—is at great pains to remind us. The camera lingers just a little too long on the tags affixed to Diana’s garments, a new outfit required for every repast of her seventy-two-hour stay: P.O.W., in which the initialism for “Princess of Wales” could just as easily scan as “prisoner of war.”

The belligerent power holding her captive is, of course, Prince Charles (Jack Farthing), to whom Diana had then been married for ten mostly miserable years (they’d separate in 1992 and divorce in ’96). “Yes, everyone here hears everything,” the heir apparent sniffs to his wife—an ominous avowal that becomes a catchphrase in Spencer, a film that fervently believes that anything worth saying is worth uttering twice or thrice. 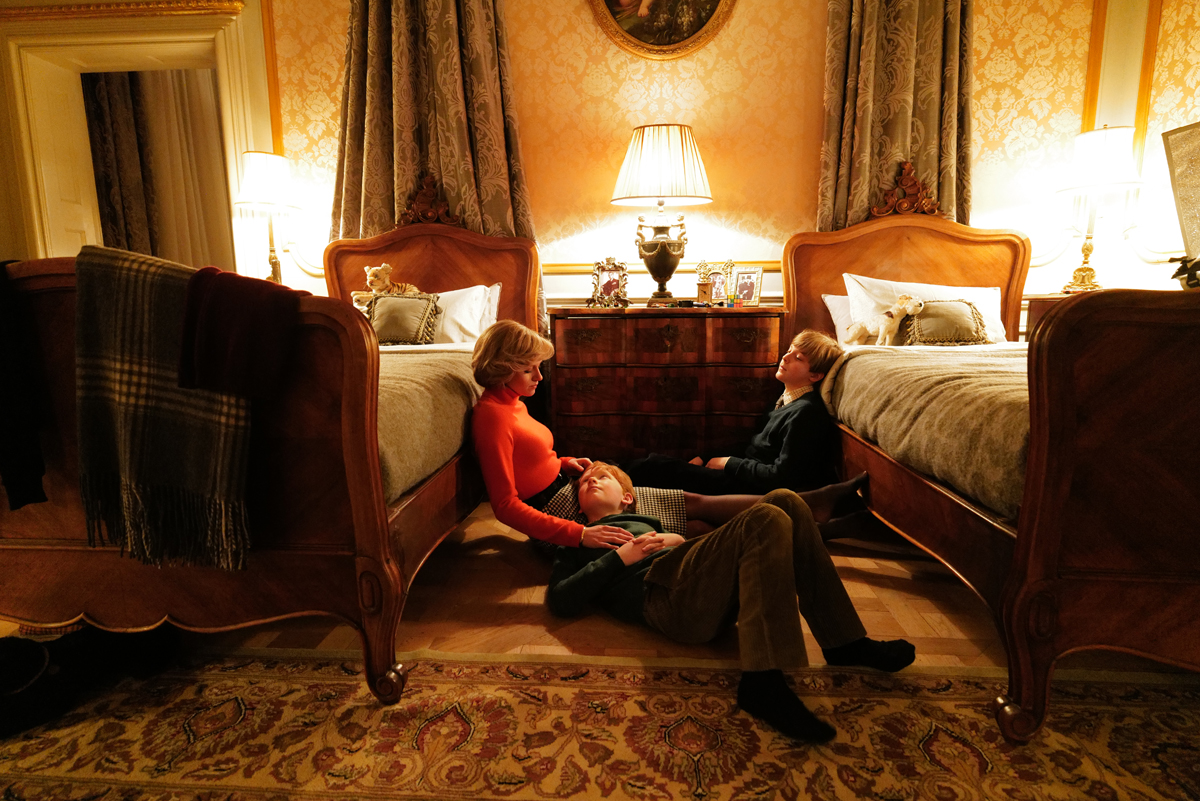 And what is everyone hearing in the echoey corridors of Sandringham House? For starters, the nonverbal noises emitted when the princess is in the throes of her well-documented mental-health disorders, which a project as unsubtle as Spencer—its broadness punctuated by Jonny Greenwood’s agitated score and cinematographer Claire Mathon’s frenzied camera movements—is all too eager to dramatize: Diana regurgitating, in one of several episodes depicting her heaving into a toilet bowl, her Christmas Eve dinner, a purge followed by a late-night binge of lobster and three-tiered cakes; Diana harming herself with a pair of wire cutters. When Her Royal Highness does use her words to communicate her distress, Larraín and Knight stray further from the public record. But their fanciful notions of their unhinged heroine suggest less a thirty-year-old woman (and mother of two adored and adoring young sons) in crisis than a highly melodramatic teenager—one who talks to the ghost of Anne Boleyn, says “fuck,” and imperiously shoos away a royal staffer with this declaration: “Now leave me. I wish to masturbate.” We know why the caged bird wanks.

And what do these indecorous commands sound like? To my not especially sophisticated ear, Stewart re-creates the princess’s distinct elocution—Received Pronunciation tinged with Estuary English—without too much strain. Yet sometimes the indelible mannerisms of the actress, a native Southern Californian, leak out. That’s especially the case with Stewart’s throaty laugh, heard in a late scene when Maggie, Diana’s most cherished dresser (played by Sally Hawkins), makes a surprising announcement. (Maggie’s proclamation won’t seem all that startling, though, to those viewers convinced that the character’s awful bowl cut must be an auguring signal.) 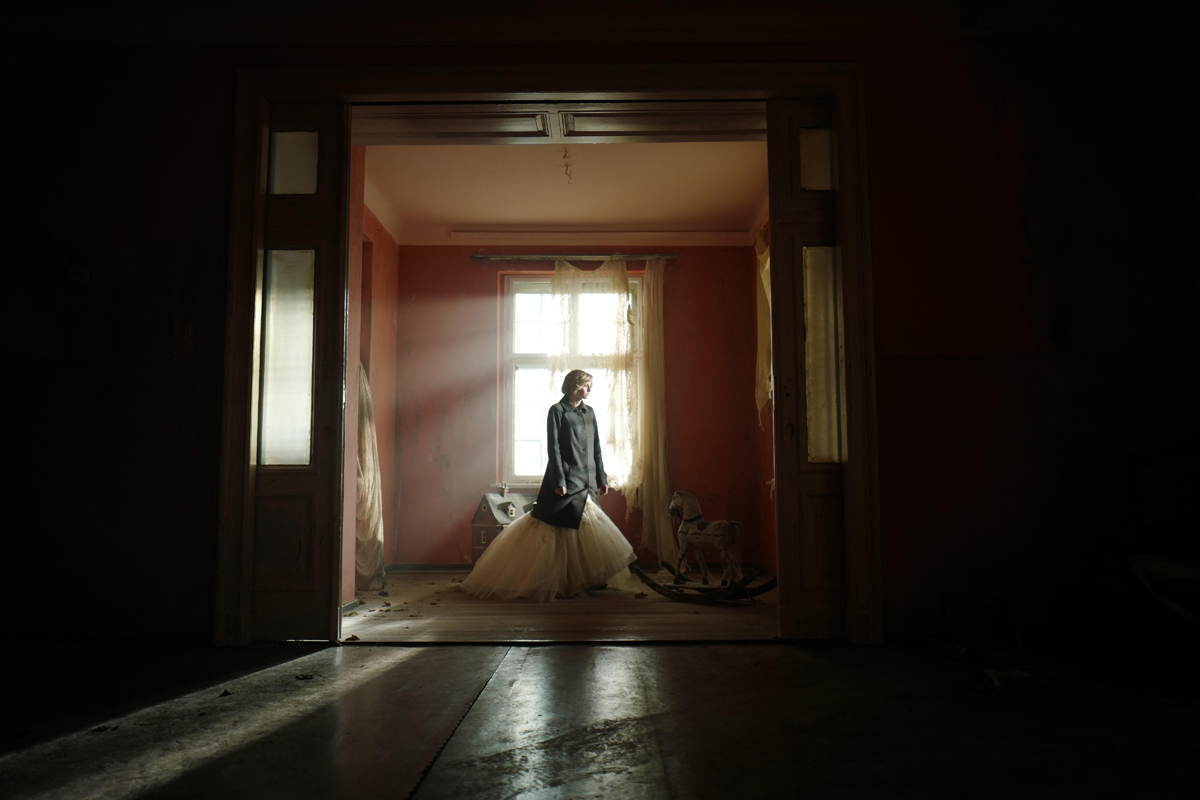 There’s something undeniably absurd about watching this quintessentially American performer share scenes with two UK actors—Hawkins and Timothy Spall, as an equerry to the Queen Mother—famous for their work with Mike Leigh, whose droll, intensely observed portraits of the British working class are the antithesis of a gewgaw like Spencer. But these oddities also have their own unexpected pathos, lending dignity to a film bloated with tawdry psychologizing. Five years ago I wrote that Stewart “is one of her generation’s most quicksilver performers,” an assessment I still stand by. Tasked with inhabiting a martyr, one whose prolonged woes were largely caused by the masks she was forced to wear, Stewart refuses to let the masquerade swallow her whole.