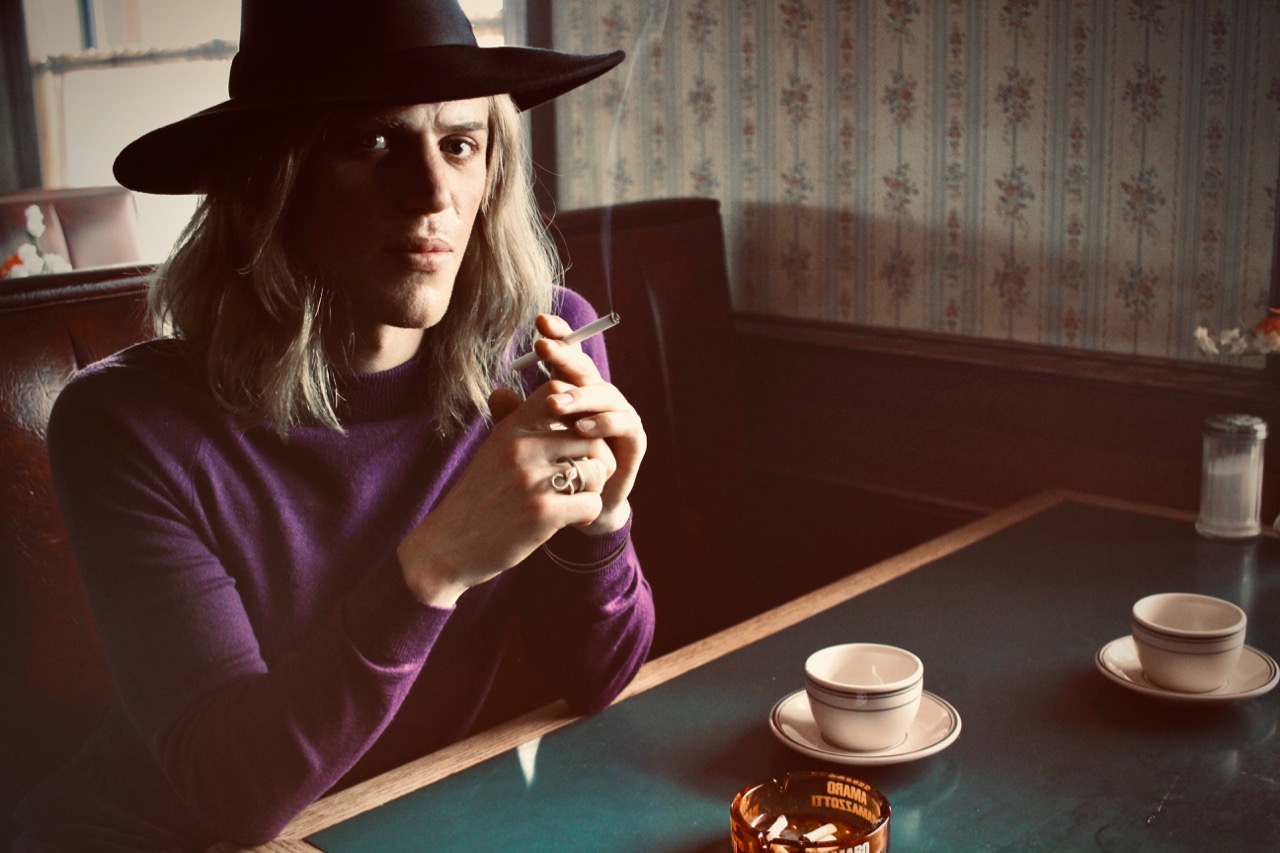 Stardust, directed by Gabriel Range, available to rent on all major digital platforms and on cable VOD beginning November 25, 2020

Gabriel Range, the director and cowriter (with Christopher Bell) of Stardust—a film that traces David Bowie’s first road trip in the US, in 1971, a year before the protean performer launched his Ziggy Stardust persona and became a glam-rock godhead—is at pains to avoid the word biopic to describe his project. He had loftier ideas in mind. “I set out to make a film about what makes someone become an artist; what actually drives them to make their art,” he explains in the press notes. “The idea was to make a film about what we’ve not seen: the interior journey David Bowie might have taken to become that artist.”

Although he admits that Stardust is “very much grounded in fact,” Range regards his movie, featuring a listless performance by Johnny Flynn as a twenty-four-year-old, longhaired Bowie, as “a work of speculative fiction.” That contrary, hedging language is mirrored in the film’s opening disclaimer: “What follows is (mostly) fiction.” My language will be blunter. Reducing its central figure—one of pop culture’s premier maestros of rebirth—to the dopiest armchair psychology, Stardust reaches a nadir in the already debased genre of rock-star docudramas. Low-budget LARPing, the film may be most memorable for the number of wigs that seem to have been scraped out of the bottom of a Party City remainder bin. 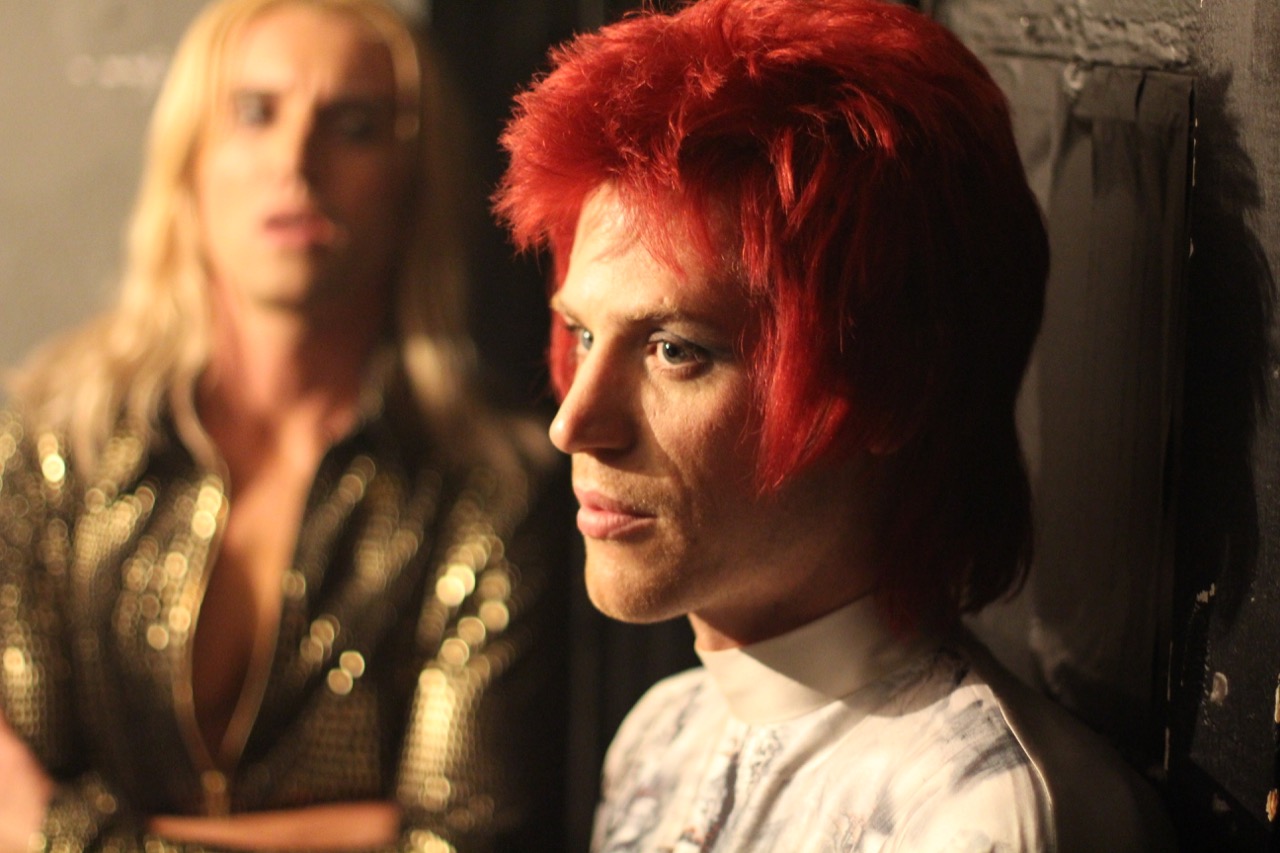 Bad things come in threes. Stardust is the latest installment in an unofficial trifecta of recent movies about British, gay (or, in Bowie’s case, gay-ish) rock idols who ascended to superstardom in 1970s, following the Freddie Mercury fiasco Bohemian Rhapsody and the more innovative but still inanity-clogged Elton John biopic Rocketman. Yet the earlier films, at the very least, benefited from the inclusion of the chart-topping hits by their respective subjects. Stardust, owing either to a bankroll insufficient to secure music rights or the Bowie estate’s refusal to cooperate, is devoid of any original Bowie song, most conspicuously 1969’s “Space Oddity,” his lone successful single by ’71 and one referred to repeatedly in the movie. This enormous restriction forces Range and Flynn to give us a Bowie twice removed: when performing, Flynn does covers of songs that Bowie himself covered, such as Jacques Brel’s “My Death” and the Yardbirds’ version of “I Wish You Would.” Flynn, who does his own singing, seems content with doing a passable imitation of the gentle tenor of Belle and Sebastian’s Stuart Murdoch rather than aiming for Bowie’s vocal pyrotechnics. 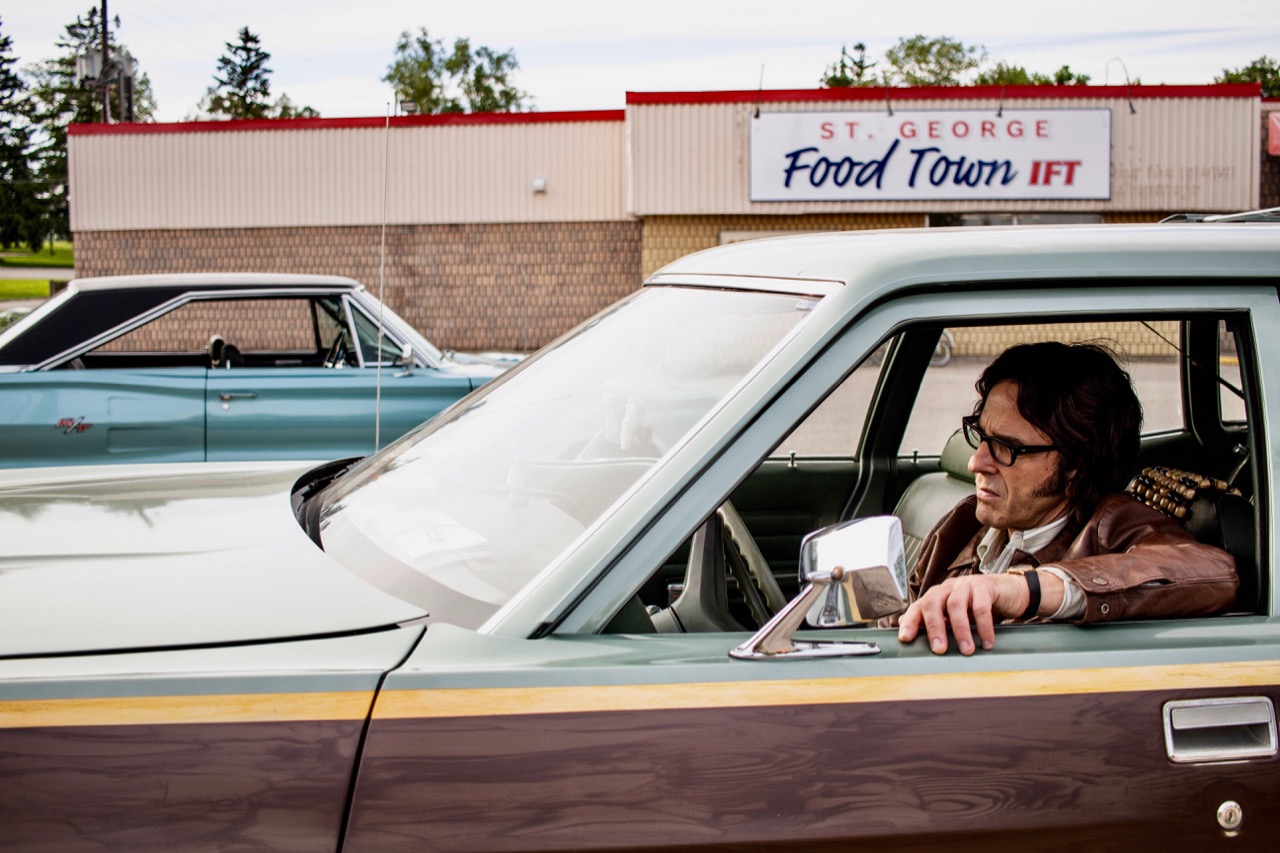 While this limitation typifies Stardust’s general tattiness—its cut-rate cosplay further evidenced by the garishly obvious rear projection as Bowie is driven across the “States” (played mainly by Ontario) in a station wagon by Ron Oberman (Marc Maron), a Mercury Records publicist convinced that the young Englishman is going to be “the biggest star in America”—cheapness is not the film’s biggest offense. It is when Range cuts to another kind of voyage—traversing his subject’s “interior journey”—that Stardust becomes unpardonable.

On this road to nowhere, the film elevates a little-known individual from Bowie’s life, his mentally ill, older half-brother, Terry Burns (Derek Moran), who had schizophrenia, to the status of grand demystifier, the figure who can provide tidy explanations for what is largely ineffable: Bowie’s talent, charisma, and gifts for reinvention. In a series of awkwardly shoehorned flashbacks, usually triggered by interminable shots of Bowie staring at himself in a mirror, we first see Terry making prophetic pronouncements to his younger relative: “It’s art. You don’t want everyone to like it,” he consoles Bowie, dejected over the commercial failure of his 1970 album, The Man Who Sold the World. Terry’s role as elder sage, though, is quickly eclipsed by his function as cautionary tale as his psychotic episodes mount and he is confined to a psychiatric unit. Bowie frets mental disorder will come for him, too, a notion Range wields as a cudgel, especially when a scene of the singer responding to the fatuous queries of a Rolling Stone journalist—“Do you have trouble separating fantasy from reality?”—is intercut with a similar sit-down between Bowie and Terry’s psychiatrist, Dr. Reynolds (Anthony Flanagan), who describes the “schizoid spectrum.” 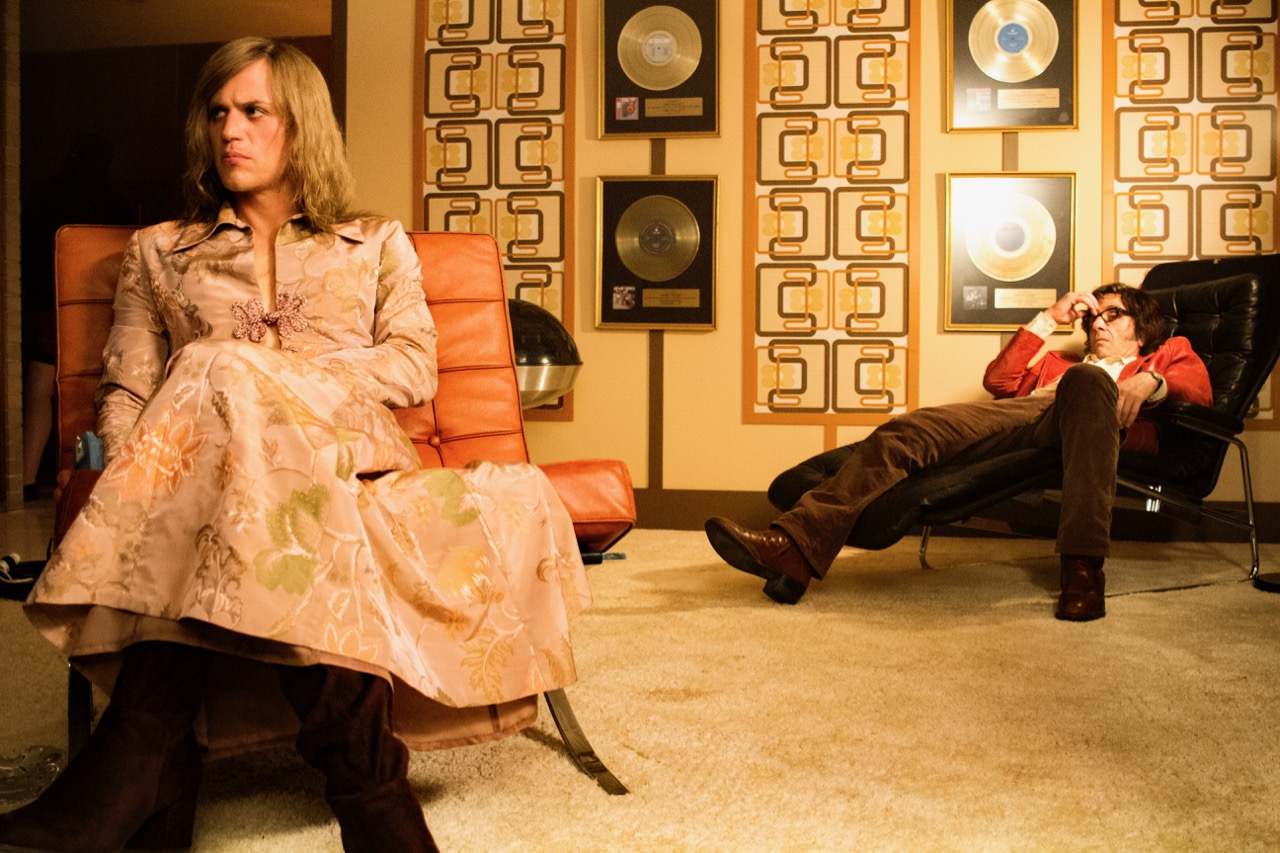 Stardust falls on the high end of this spectrum, on the one hand stretching the concept of “speculative fiction” to encompass idiotic diagnoses and false equivalence and on the other obsessing over mimetic re-creation—attempts at veracity, often of minor details, that end up only further emphasizing the film’s paltriness. Having Flynn outfitted with contact lenses that replicate Bowie’s dual-colored eyes and differing pupil sizes, for example, seems to have taken priority over the fact that the actor possesses not even a fraction of the idol’s magnetism. An early interview in the US finds Flynn struggling to contort himself into the same fey position that Bowie, bedecked in a Michael Fish frock and draped on a chaise longue, assumed for the famous cover of The Man Who Sold the World. 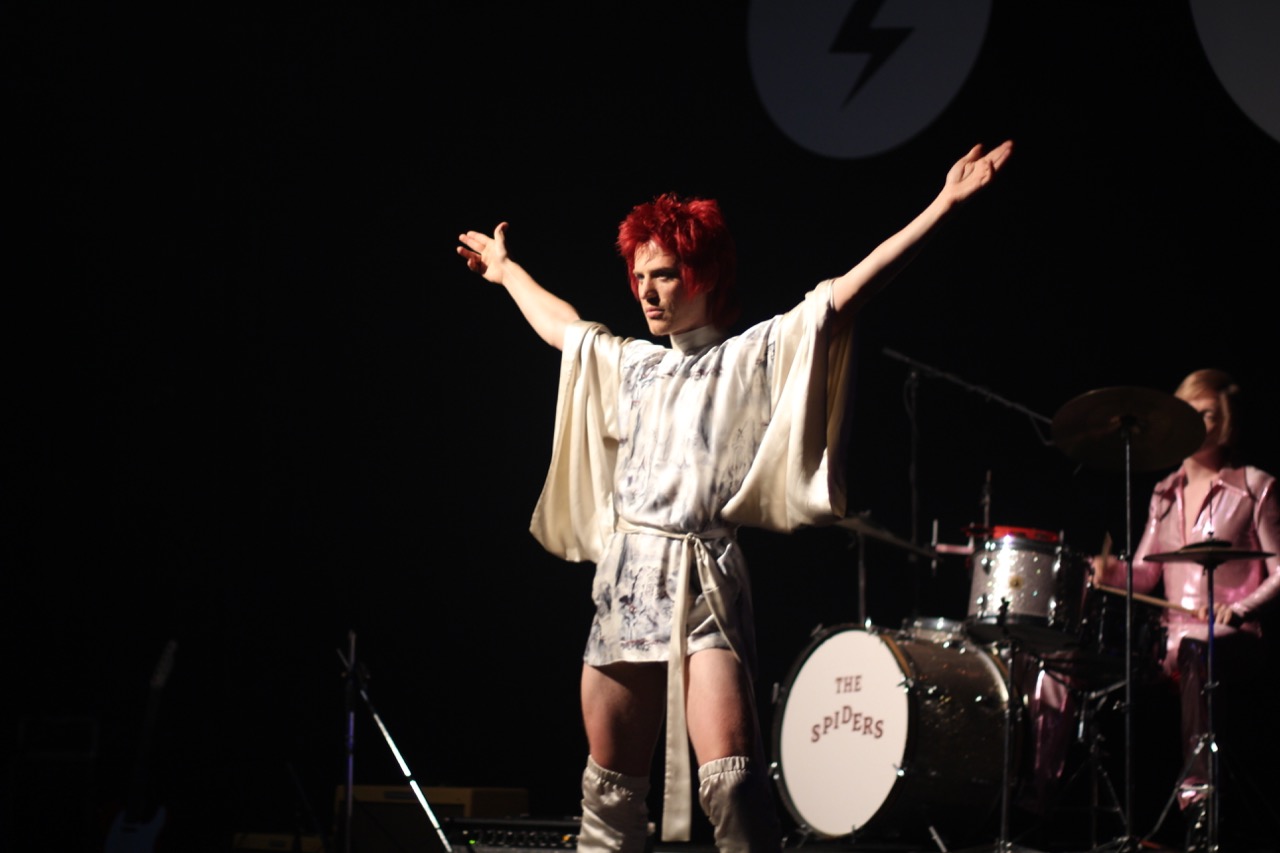 Saving the worst for last, Range ends his film in 1972, with the debut performance of Bowie as Ziggy Stardust, an alter ego that, as the movie’s wild conjecture has it, took shape after the singer witnessed Terry’s participation in drama therapy at the clinic (“You discharge your psychosis by pretending to be someone else,” Doc Reynolds elucidates) and went home to do some frenzied scrapbooking and journaling. The inaugural Ziggy show pitifully tries to mimic D. A. Pennebaker’s superb concert documentary Ziggy Stardust and the Spiders from Mars, a chronicle, filmed in 1973, of the final appearance of the pomegranate-mulleted messiah from outer space. This feeble duplication goes so far as to include a tossed-off line—“Incidents occurring”—made backstage by Bowie’s wife Angie, played in Range’s film by Jena Malone as a one-note virago. 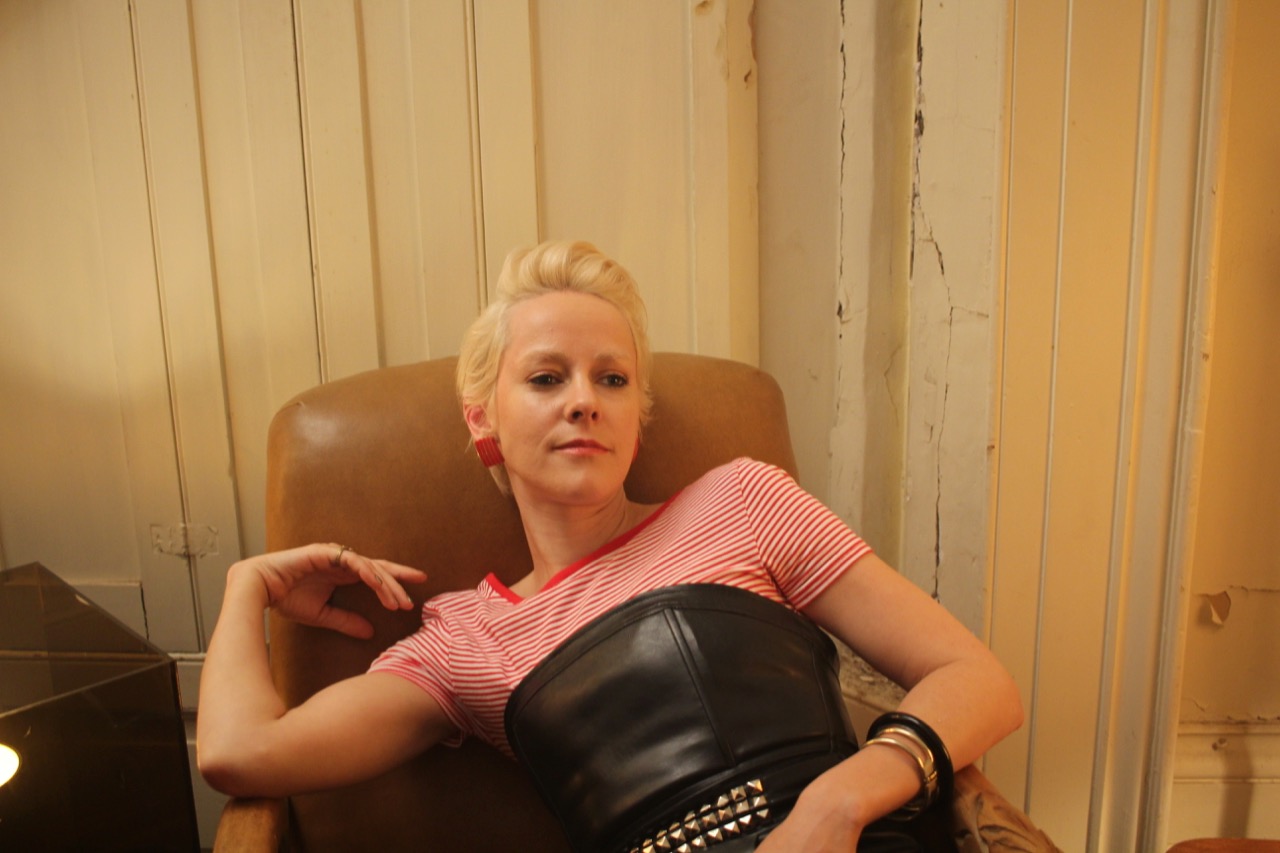 The last song Bowie performs in Pennebaker’s movie, a document of Ziggy’s demise, is, fittingly, “Rock ’n’ Roll Suicide.” Stardust could have been titled “Rock ’n’ Roll Deicide.” Pennebaker’s film is just one of many, whether nonfiction or narrative (notably Nicolas Roeg’s The Man Who Fell to Earth from 1976, which features Bowie in his first major scripted role), that captures Bowie’s spellbinding aura—an all-too-rare quality that Range banalizes. Lesser-known than but just as dynamite as Pennebaker’s portrait is Cracked Actor (1975), an installment of the BBC arts-documentary series Omnibus that was filmed during the nascence of the singer’s “plastic soul” phase in ’74. (You can watch it for free at archive.org.) Bowie discusses not only the multiple personae he’s shed but his hope that these flamboyant reincarnations have played some part in his fans “finding more characters in themselves than they originally thought they had.” This is the realm of imagination—ungovernable, playful, generative instincts that Stardust diminishes to the symptomatic.