How the mighty sapphic conductor has fallen: a commanding performance by Cate Blanchett in Todd Field’s latest film. 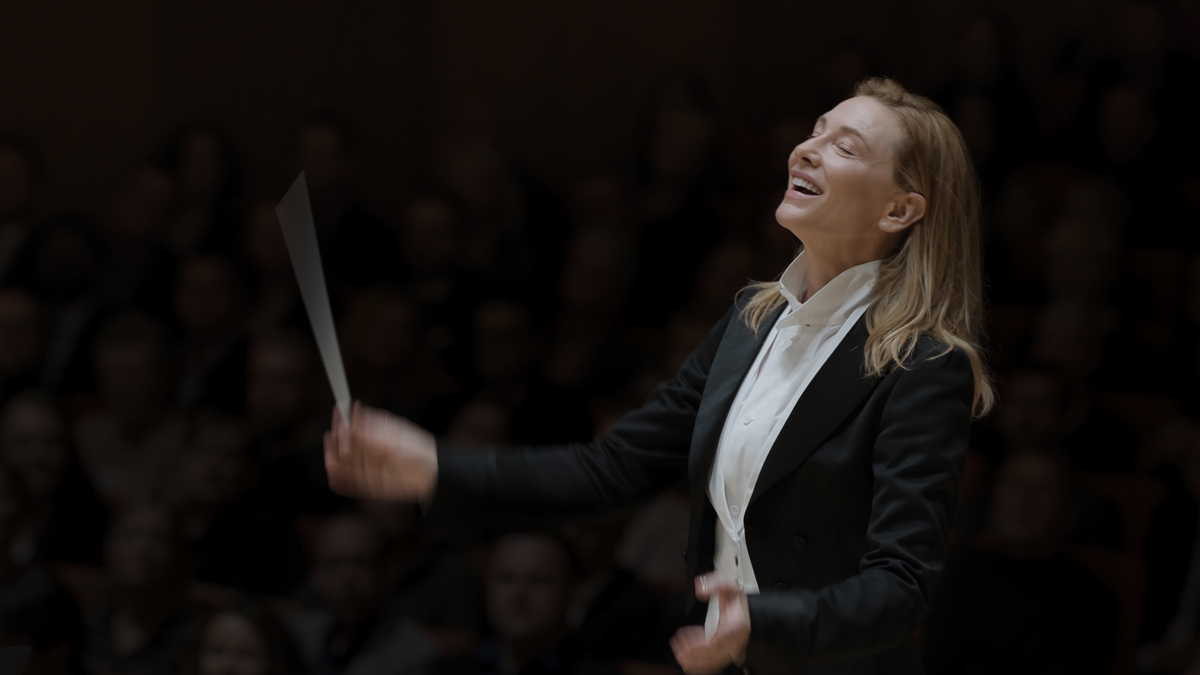 Dense with riveting talk and boosted by a mesmerizing performance from Cate Blanchett in the title role, Todd Field’s film proves as seductive as the protagonist herself. Haughty, erudite, handsome, supremely accomplished, and regally gay, Lydia Tár, a world-famous composer and conductor, calls to mind both the “suave sappho” and the “lessoning lesbian,” two archetypes in the unsurpassable taxonomy devised by Parker Tyler in his essential 1972 compendium, Screening the Sexes: Homosexuality in the Movies. These categories—the former exemplified by the soignée, fur-clad Stéphane Audran in Les Biches (1968), the latter by Dorothea Wieck’s compassionate teacher at a girls’ boarding school in Mädchen in Uniform (1931)—were not uncommon in pre-Stonewall depictions of lez romance, in which imbalances, whether of status, finances, age, power, or all of the above, served as the erotic engine. A contemporary embodiment of a twentieth-century paradigm, Lydia is felled by modern-day methods: a distorted, unflattering video of the titaness that goes viral and a #MeToo scandal.

That Tár, for the most part, engages intelligently with highly charged sociopolitical issues that have fueled innumerable idiotic think pieces is just one of its many pleasing surprises. That this wholly original, effortlessly lofty film is by Field—an actor turned writer-director whose previous two features, Little Children (2006) and In the Bedroom (2001), were muddled literary adaptations of middle-class malaise and anguish in New England—is another. Tár’s greatest pleasure, though, may be its casting. Field wrote the film with only one person in mind: Blanchett, whose punctilious performing style I have often found stifling and off-putting. But, much as Blanchett’s froideur was tapped so deftly for her portrayal of the eponymous character in Todd Haynes’s Carol (2015)—his superb interpretation of The Price of Salt, Patricia Highsmith’s 1952 sapphic romance—her starchy acting finds a perfect outlet in shaping Lydia’s imperiousness. (In fact, Carol Aird, an older, more experienced mondaine who beguiles a nineteen-year-old department-store clerk, might be thought of as a forerunner of the classical-music deity.)

Focusing on just a few tumultuous weeks in the conductor’s life, Tár, in an early sequence set at the New Yorker Festival, briskly establishes the protagonist’s high-culture achievements: she graduated Phi Beta Kappa from Harvard; earned a PhD in musicology from the University of Vienna; had appointments at the five major US orchestras; won awards for composing; and, since 2013, has been the principal conductor of the Berlin Philharmonic, the first woman to hold the position. Interviewed onstage by Adam Gopnik (the host magazine’s insufferable longstanding fixture, who plays himself), Lydia’s icy self-possession and skill at bewitching an audience are abundantly on display. After casually dismissing gender bias in her field—it’s never held her back, at any rate—she eloquently holds forth on the wisdom imparted by Leonard Bernstein (a mentor of Lydia’s and the film’s lodestar), the marriage of Alma and Gustav Mahler (whose fifth symphony she is preparing to record), the epiphanies that emerge during rehearsal, and her upcoming memoir, Tár on Tár. (When uttered, those three monosyllables sound ludicrously pompous, as intended; the sly dig is even funnier once we learn more about Lydia’s decidedly non-Europhilic background.)

At a reception following this Q&A, an effusive young woman flirts with the conductor, whose too-eager responses are closely monitored by her assistant, Francesa (Noémie Merlant); the adjutant, we gather, has had to intervene in these situations many times before. Next Lydia is off to a lunch meeting with Eliot Kaplan (Mark Strong), a dilettante conductor whose obscene riches as an investment banker have endowed a fellowship that Lydia founded to provide opportunities for young, aspiring female orchestra leaders; its alums include Francesca and a flame-haired woman (seen only fleetingly) named Krista, who was once, we are to infer, a plaything of Lydia’s. Since spurned, Krista has been sending Francesca desperate emails and texts, which her increasingly anxious boss orders her to delete.

Often shot in long takes, Lydia’s tête-à-têtes—with, among others, Gopnik, Eliot, and her wizened predecessor at the Berlin Phil, Andris (Julian Glover)—are showcases of volubility, absorbing conversations in which names like “Schopenhauer” and “von Karajan” flow effortlessly in the river of words. Her charisma and command grow even more when she is the sole speaker, switching from English to Deutsch and back again as she leads rehearsal sessions of the orchestra, whose first violinist, Sharon (the great Nina Hoss, seen too little here), is also Lydia’s spouse. Whether the women, who live in a luxe, spectacular home in the German capital with their young daughter, were colleagues or lovers first remains deliberately unclear, just one more example of the conductor’s pattern of blurring the boundaries between professional and private life—lines that Lydia seems intent on transgressing again with the newest member of the philharmonic, twentysomething cellist Olga (Sophie Kauer).

With her elegantly tailored suits, Lydia brought to mind another sapphist well-known for her bespoke garments: Fran Lebowitz, who once said, “There’s too much democracy in the culture, not enough in the society.” The towering virtuoso—long enshrined in an autocratic role, too drunk on her own power—would certainly agree with the first part of that statement. Confronted with Gen Z standards at a Juilliard master class (surreptitiously recorded), Lydia at first tries in good faith to counter the claim of a “BIPOC pangender” student who professes to despise Bach for his “misogyny.” She cautions against “siloing what is acceptable and unacceptable,” exhorting this pupil not to “be so eager to be offended.” What should have been a dialogue, however, ends up becoming a soliloquy.

When Lydia’s inevitable downfall arrives in the final act, the otherwise cool, stately Tár spins out of control, and its final line proves too trite for a film so thoroughly committed to precision in ideas and language. The missteps do not ultimately detract, though, from the perverse thrill of witnessing such an intricate portrayal of a suave sappho, a lessoning lesbian, one whose Olympian brilliance and talent are vitiated by the most plebeian of shortcomings: petty vanities, desperate ego needs, pathetic hypocrisies.