Poetry
The Translator of Desires 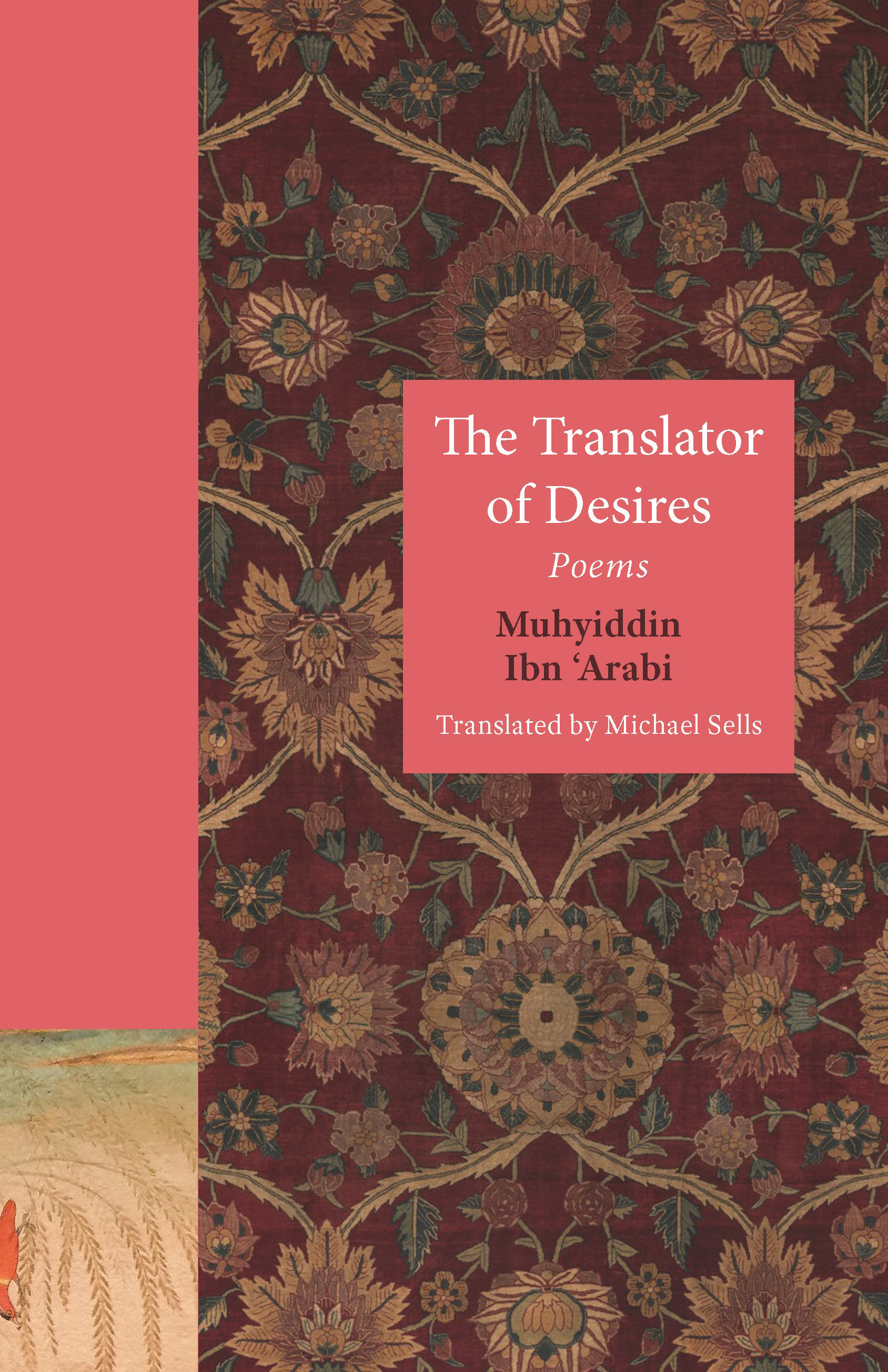 Commonly referred to as al-shaykh al-akbar (the grand master), Muhyiddin Ibn ‘Arabi was a poet, scholar, and mystic whose works have been cornerstones of the Sufi tradition for over eight centuries. Ibn ‘Arabi was born in Murcia in 1165, and grew up in Seville. In his twenties, he took off for North Africa, seeking knowledge in Tunis, then in Fez, before returning to Al-Andalus. In 1200, he left again to perform the ritual pilgrimage, and never returned. After a few years in Mecca, he moved to Anatolia, then to Damascus, where he died in 1240. He was prodigiously prolific, authoring hundreds of books, including a Diwan of 3,500 poems. He was not primarily a poet, however. Most often, he is viewed as a philosopher and theologian, a dry analytic mind, especially when compared to his younger contemporary, the Persian poet Rumi. William Chittick, who devoted a major book to each, chose telling titles: The Sufi Path of Love for Rumi, and The Sufi Path of Knowledge for Ibn ‘Arabi.

Could the publication of Michael Sells’s bilingual edition of Tarjuman al-ashwaq (The Translator of Desires) possibly change this view? This collection of sixty-one love poems was translated into English only once before, over a century ago. It sprang from Ibn ‘Arabi’s encounter with a young woman named Nizam who, he insists, was more than a muse. She would “bind the gaze, dazzle a gathering with her speech, and astonish anyone engaging her in conversation.” The daughter of a learned man, “she was her own father’s teacher.” Nizam represented not only poetic inspiration, but spiritual aspiration. To engage with her was to come closer to the divine. After all, Ibn ‘Arabi met her while circumambulating the Ka‘ba. To him, she is God’s transcendence made immanent. Conversely, in a preface to the volume, Ibn ‘Arabi refers to God in a most unusual manner as “the beautiful, the lover of beauty.”

On the level of dramaturgy, the poems take a cue from the opening movement of pre-Islamic Arabian odes, known as the nasib, which is an evocation of and a lamentation over ruins. Upon returning to the site of his last encounter with the beloved, the poet finds only faint traces in the sand: she and her party have left the campsite. These poems strive to dispel an overwhelming sense of distance—between the lover and the beloved, the human and the divine, the physical and the spiritual. The poems are constantly (re)building unity through words, images, and echoes across line breaks. They are continually reorienting the gaze: “The one you seek / is within your ribs.”

What sets the Tarjuman apart is the way it links the poetics of the nasib to the rituals of Meccan pilgrimage. The desire-laden stations of the amorous quest correspond to specific rites of the hajj. In certain poems, the lover’s heart is likened to the Ka‘ba: “Hour by hour they / circle my heart / in rapture and graze / each corner with a kiss.” Sells notes that “in Sufi thought, God cannot be known as an object.” To achieve union with the divine beloved is to polish the mirror of one’s own heart, to seek the annihilation of one’s ego. The poems sketch a zone of experience marked by a porousness between outer events and inner perception. “Lightning flashed / in Abraqáyn / Thunder roared / within our ribs.” The heart is a sensor. Its expansive community of feeling includes plants and animals. “A ringdove cooed / A sad man yearned, / stirred by the echoing / yearning and grief.” The speaking voice shifts incessantly. The poems are sites of metamorphosis, linguistic condensations of emotional journeys where love and divine worship come together and “in a rush of saffron and musk / beauty falls bewildered.”

Ibn ‘Arabi was criticized for authoring what some viewed as a celebration of sensuous love that did not befit a religious scholar of his stature. In response, he produced a commentary that explicates every line, if not every word of the Tarjuman, demonstrating their theological underpinnings and the poems’ Qur’anic intertext. This commentary has never been fully translated into English, and Sells opted not to include it: while invaluable to students and devotees of the grand master, it is so lengthy and technical that it would take over the book. Instead, the present edition resolutely centers the poems themselves. Sells does offer a discussion of each poem, in part informed by Ibn ‘Arabi’s. These comments are presented as endnotes, alongside various appendices, including Ibn ‘Arabi’s prefaces. In his introduction, comments, and notes, Sells shares his erudition in a way that impresses without intimidating, illuminates without foreclosing. In allowing the poems’ multilayered symbolism to come to the fore, he brings Ibn ‘Arabi closer to us, even as he helps us take stock of the distance that separates us from his time.

On the level of form, the Arabic poems are fairly traditional, with their monorhymes and fixed metrical patterns, which, wisely, Sells does not attempt to emulate. Rather, he makes up for them by other means. An Arabic line becomes a short stanza of two, three, or four lines, where line breaks are an essential vehicle for surprise, assonance, and narrative dynamics. Sells previously used this technique, to glorious effect, in Desert Tracings (1989), a volume that collects his translations of the pre-Islamic odes known as the mu‘allaqat.

The Translator of Desires strikes a musical balance between precision and readability. Sells’s care for Ibn ‘Arabi’s words is matched only by his concern for the reader’s ears. In addition to his knack for euphonic concision, he brings decades of fine-tuning to bear on this work. His 1994 study Mystical Languages of Unsaying includes two long chapters on Ibn ‘Arabi. Stations of Desire (2000) comprises twenty-four poems from the Tarjuman, accompanied by a sequence of original texts, where translating Ibn ‘Arabi reveals itself to be generative of Sells’s own writing. Bewildered (2018) contains forty-six poems from the Tarjuman, presented as a collection of poetry in English by the Post-Apollo Press, a publisher specializing in contemporary experimental literature. The Translator of Desires takes things to another level. Not only is it a translation of Ibn ‘Arabi’s entire book, complete with a critical apparatus; it also serves as a careful edition of the Arabic text, for which Sells consulted myriad manuscripts in numerous libraries. As the first-ever Arabic volume in the Lockert Library of Poetry in Translation, it sets a remarkable example.

Sells insists in his introduction that the Tarjuman poems are not merely rhyming versions of Ibn ‘Arabi’s philosophical ideas. On the contrary, they foreshadow his teachings. With this in mind, I ponder the arc of Sells’s career—the rich, sustained line traced by the eclectic endeavors of the professor as translator, the translator as scholar, the scholar as poet. This elegantly poignant Translator of Desires appears as the summation of a life devoted to bringing together research, pedagogy, spirituality, and poetry in ways that invite academic practice to reach beyond itself.

Omar Berrada is a writer, translator, and curator. He is the author of Clonal Hum (Editions Michel Obultra, 2020) and the director of Dar al-Ma’mûn, a library and artists residency in Marrakech. Currently living in New York, he teaches at Cooper Union, where he co-organizes the IDS Lecture Series.