The textile artist and activist traces the seam between the US and Mexico. 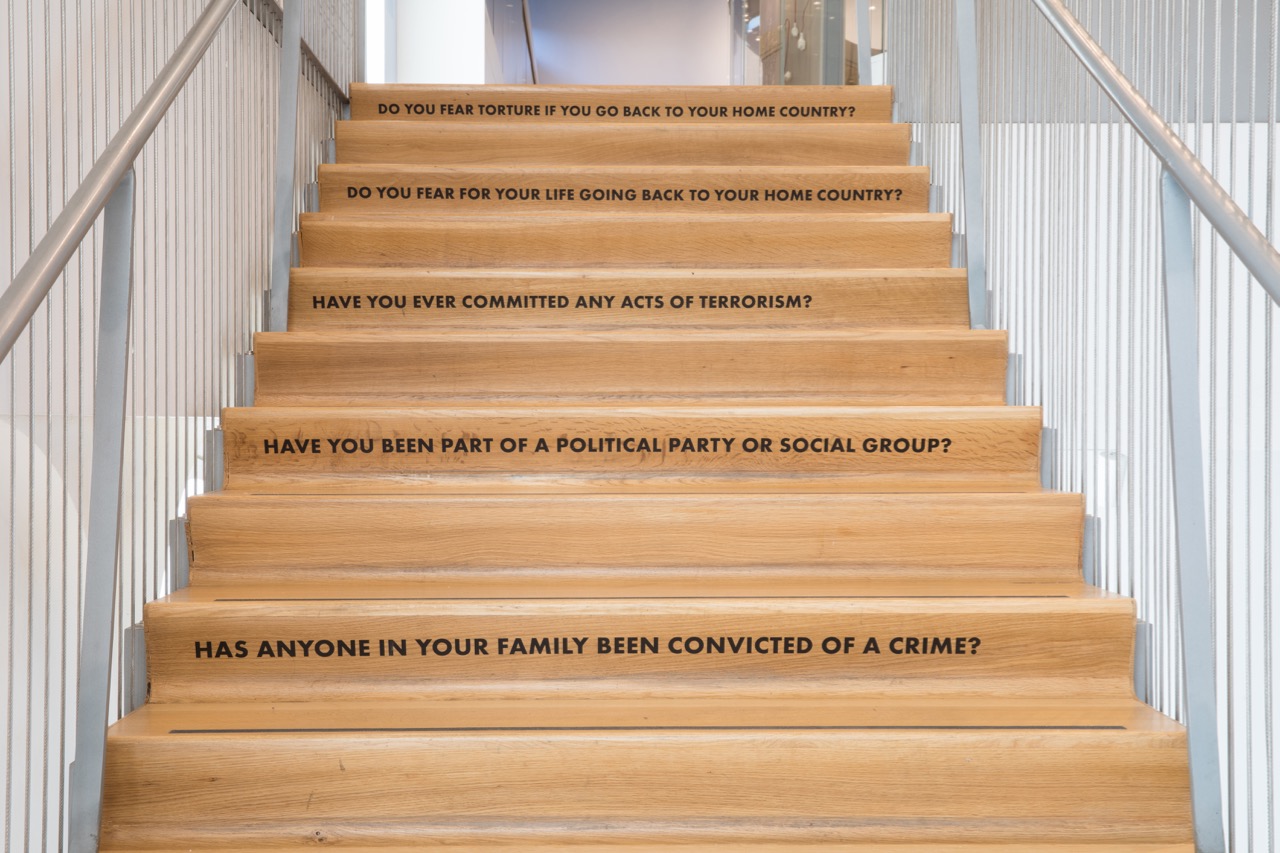 As you climb the steps to Tanya Aguiñiga’s powerful and timely exhibition at the Museum of Arts and Design (MAD), you are confronted with a series of questions inscribed on the staircase risers. They begin banally enough—“What is your name?” “Where are you going?” “What is the purpose of your trip?”—but escalate in intrusiveness as you continue to ascend. “Has anyone in your family been convicted of a crime?” “Have you ever committed any acts of terrorism?” “Do you fear for your life going back to your home country?” These queries, drawn from the scripts of border control and migrant detention center agents, set the tone for the Los Angeles–based artist’s intensely interrogative and tactile exploration of economic, political, and emotional exchanges that transpire along the seam between the US and Mexico. Taken as a whole, Aguiñiga’s practice argues that while dividing populations and landscapes, this seam also irrevocably sutures the two countries together. 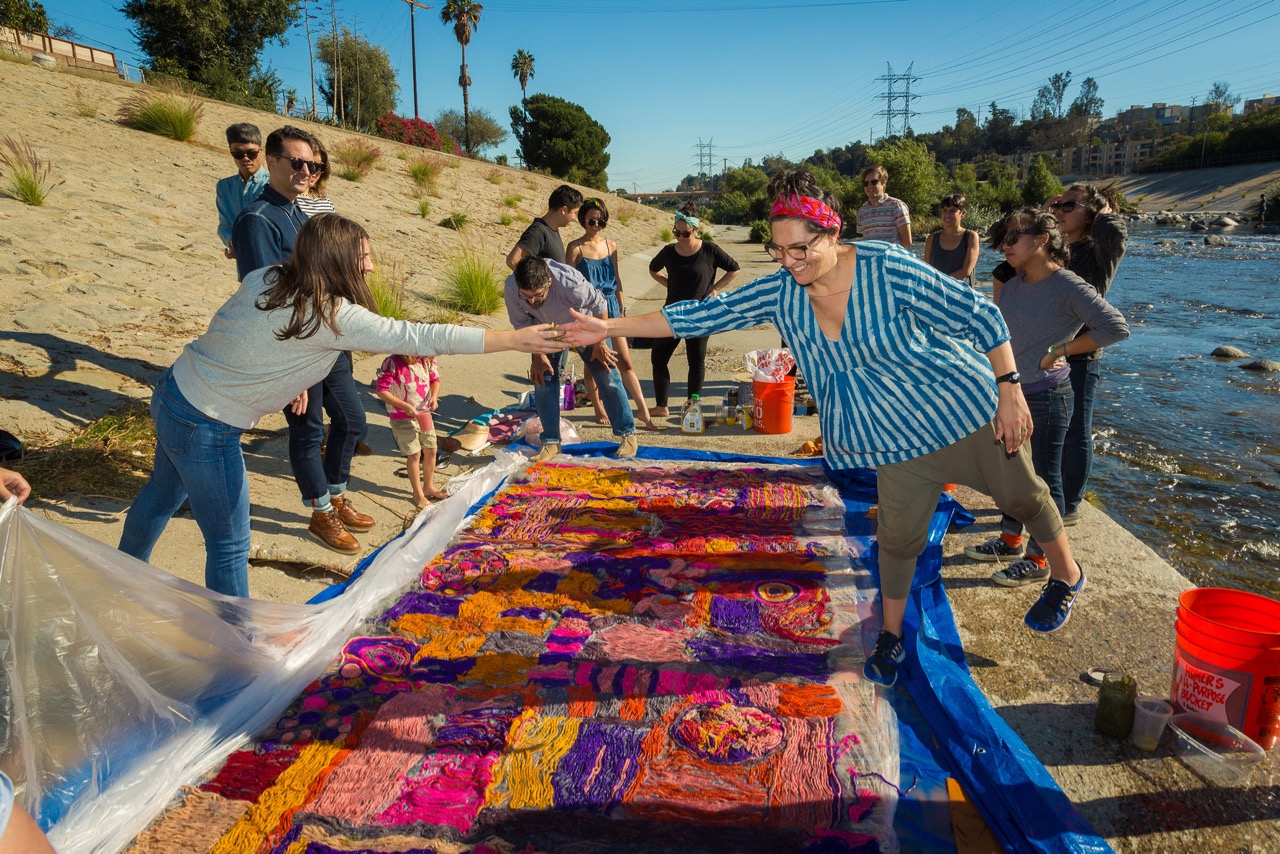 Though she is best known for her innovative melding of furniture design and textile-based sculpture, an important facet of Aguiñiga’s formation was her involvement as a member of the Border Arts Workshop/Taller de Arte Fronterizo—she helped build and run a community arts center at the informal settlement Maclovio Rojas, Mexico, for six years starting in the late 1990s. Craft & Care, curated by Shannon R. Stratton with the assistance of Angelik Vizcarrondo-Laboy (both on staff at MAD), wisely includes multidisciplinary examples from across her wide-ranging work (from activist interventions to fiber art to video), creating a dense but navigable narrative that emphasizes intimacy, bodily labor, and Latin American techniques of making. Occupying a large room on the second floor of MAD, the show is divided spatially into two halves: the first presents extensive documentation of and artworks related to the community-based AMBOS Project (Art Made Between Opposite Sides), an initiative, which Aguiñiga spearheaded, that takes place at various US-Mexico border crossing sites (2016–ongoing); the second highlights sculpture and design work that function more as stand-alone objects. However, though the two parts are roughly demarcated by different-colored gallery spaces (distracting bright pink walls and pedestals compete for attention with some of the art), Aguiñiga herself understands these distinctions as porous. 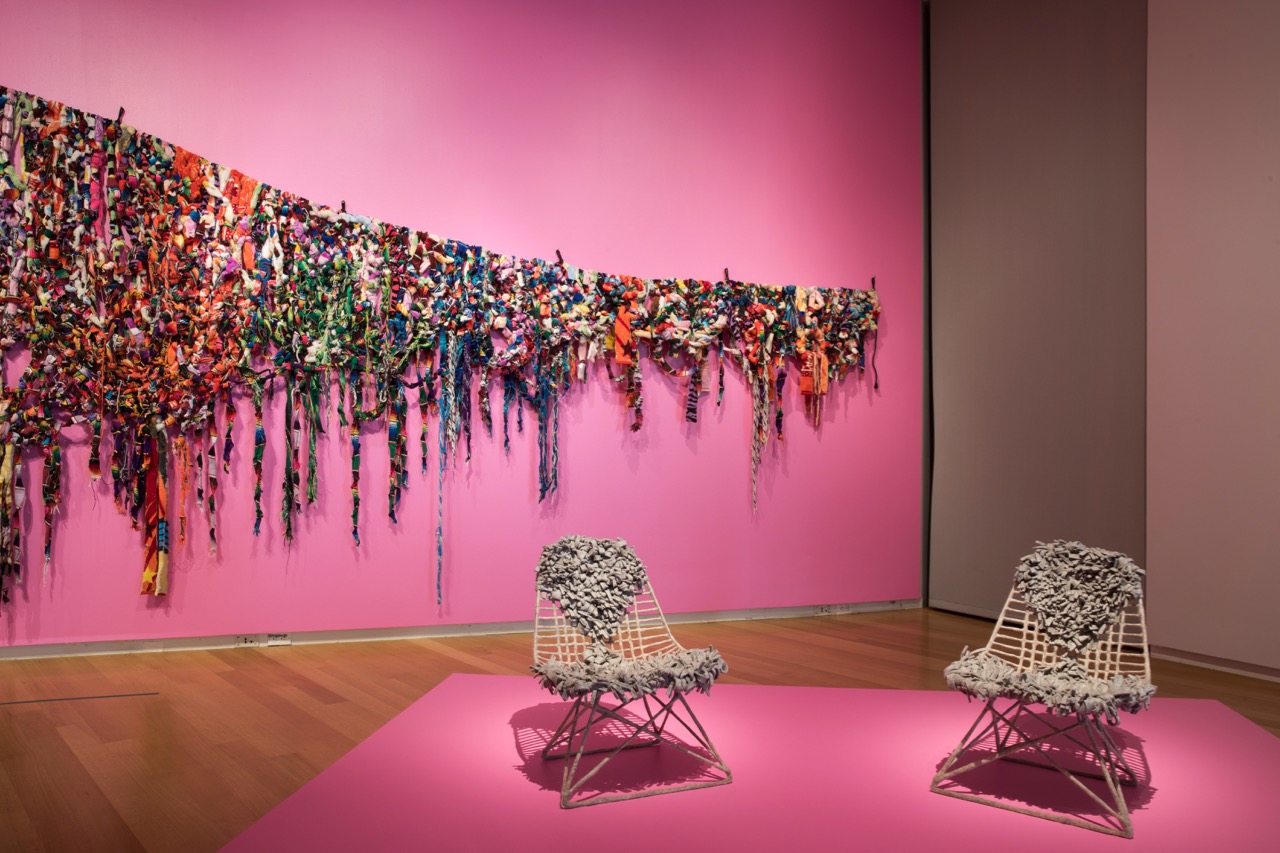 For the artist, furniture is not only tied to familial domesticity, but can suggest or even actively create alternative social relations; she often converts typically hard industrial chairs and tables made of wood or metal into softer, more accommodating fabric structures. A small selection of such work is featured in the show; for instance, in Felted/Woven Low Rod Chair (2015), Aguiñiga adds texture, warmth, and a touch of gendered perversion in the form of crotch-shaped woolen embellishments to an iconic Eames mid-century modernist design. In Support (2014), a low-lying modular configuration of sewn denim and leather brick-like units filled with rice and salt can be infinitely rearranged to produce seating, bedding, or, in emergencies, can be split open and eaten. CRAFTA Weave (2015), a large woven and knotted tapestry that energetically sprawls across the wall like a hill on the horizon, was made from seventy-five deconstructed Mexican blankets bought at the informal marketplaces that spring up at border-crossing sites; it contains strips of both traditional handmade serapes along with the ubiquitous mass-manufactured San Marcos versions as a way to register the erosion of traditional craft traditions in the aftermath of the North American Free Trade Agreement. The witty Palapa (2017), a suspended bell made of synthetic hair, makes absurd the classic Mexican thatched-roof dwelling by transforming it into an uncanny Cousin Itt–like creature whose artificially golden hue comments on the presumed cultural superiority of blondeness. 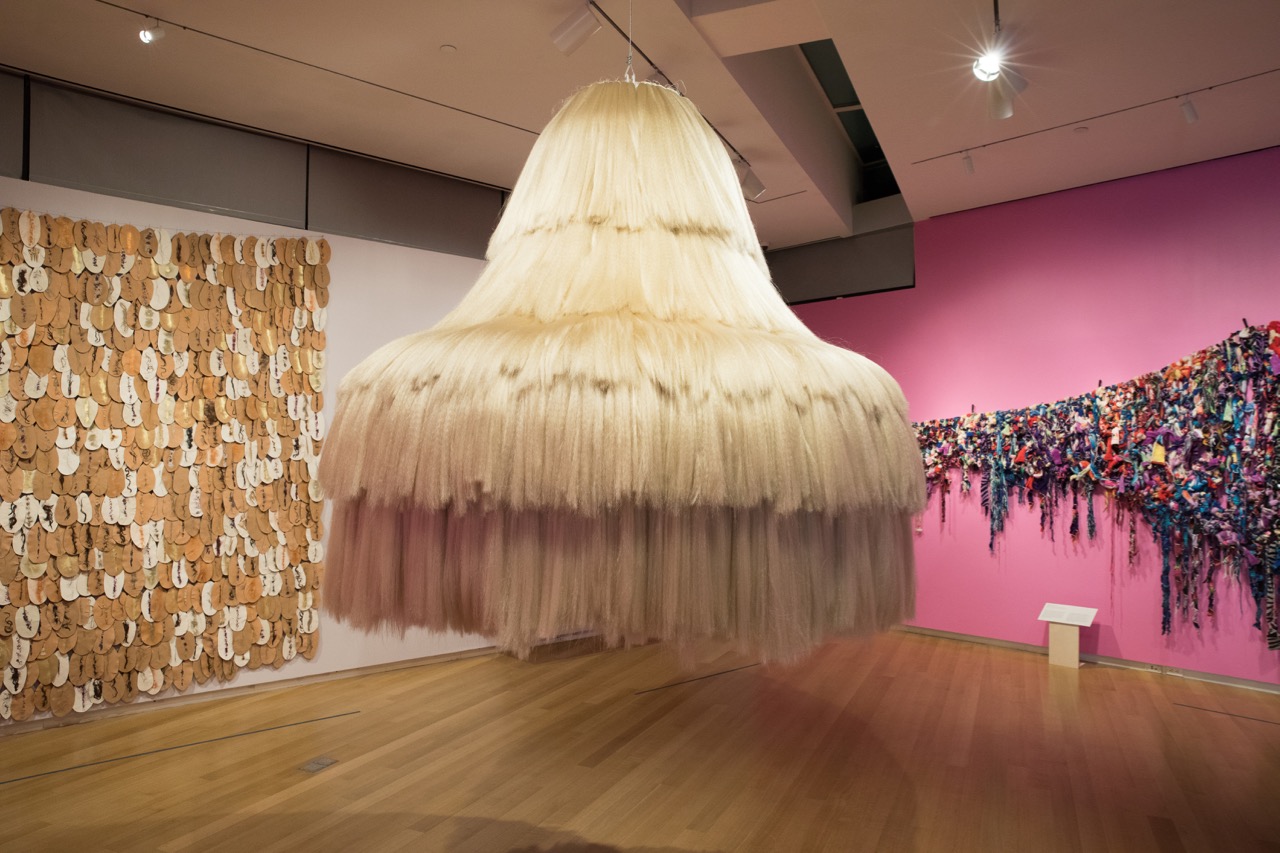 AMBOS (“both” in Spanish), an evolving collective community research project in which the artist and a team of seven others road-trip the length of the US-Mexico border, reflects on Aguiñiga’s own biography; she was born in Tijuana and crossed into the US every day to attend school. Through a series of performances enacted at the prototype border walls erected by the Trump administration, it also speaks to the pressing contemporary situation regarding immigration policies. For one of these actions, entitled America’s Wall (2018), Aguiñiga and her collaborators imprinted cotton sheets with rust marks from the corrugated metal of the already existing walls in the area, generating patterns reminiscent of both abstract paintings and shrouds; one of these sheets is hung in front of a wall covered with documentation from AMBOS as a tangible, textile remnant. The performance 96 Deaths: September 1, 2017 (2017), represented through photos and a poignant video, is an audio memorial to those who perished crossing the Arizona desert in the first nine months of that year, with Aguiñiga and the traveling group of artists and activists, together with musician Glen Weyant, striking hollow posts on the Sasabe border wall to sound a resonant chime. 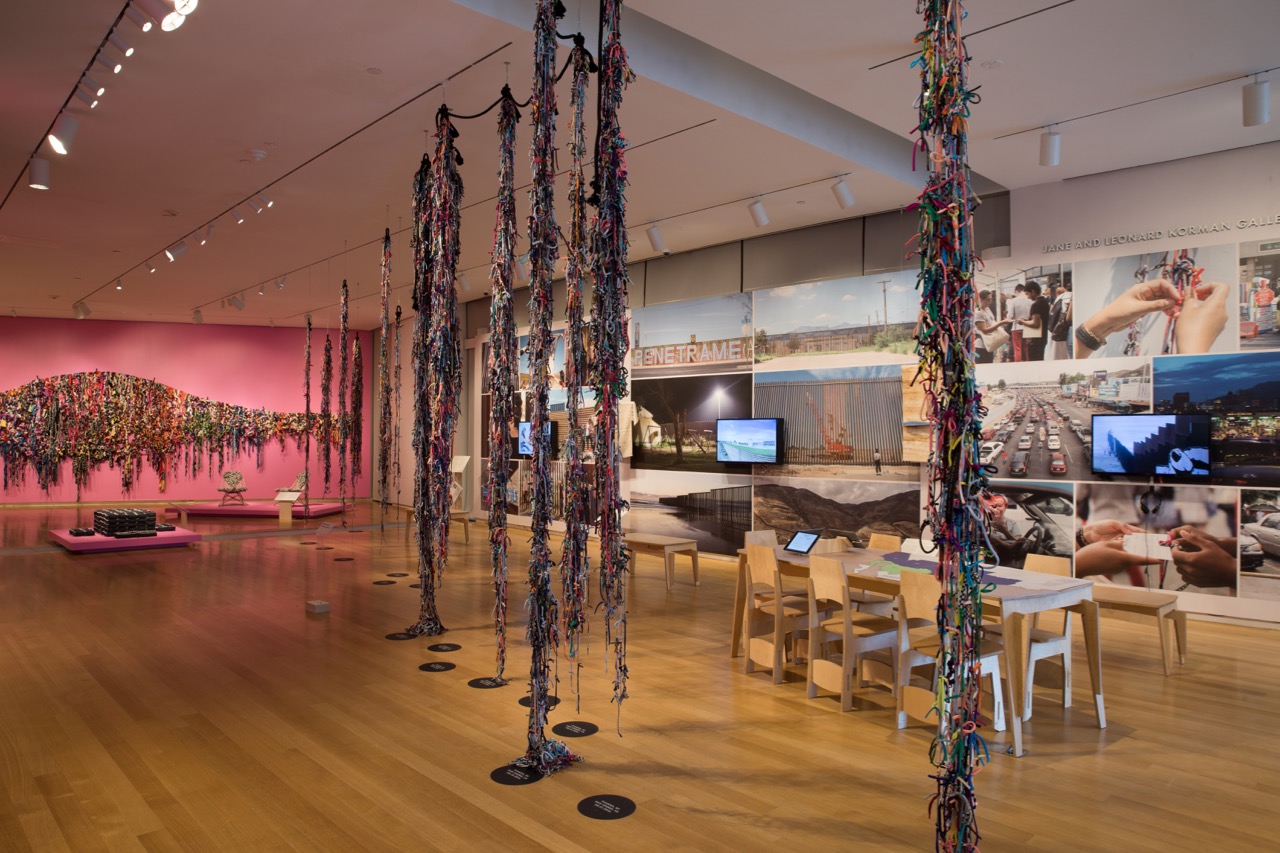 While it grapples with current realities of racism and white supremacy, Aguiñiga’s art also acknowledges precolonial indigenous precedents, from Mayan backstrap weaving to Aztec mythology. One of the most visually impressive aspects of AMBOS is the series entitled Border Quipu/Quipu Fronterizo (2016–18), which was inspired by the quipu, the Incan knotted cord system of accounting. Each of Aguiñiga’s quipus—there are over a dozen in the show—documents her visits to border crossing locations (such as Ciudad Juárez–El Paso), during which she passes out postcards printed with the bilingual question: “What are your thoughts when you cross this border?” A compendium of responses to her query (by those traversing the border as well as vendors with no intent to cross) are available for the exhibition’s visitors to scroll through on iPads that are installed on a low, long table near the quipus. 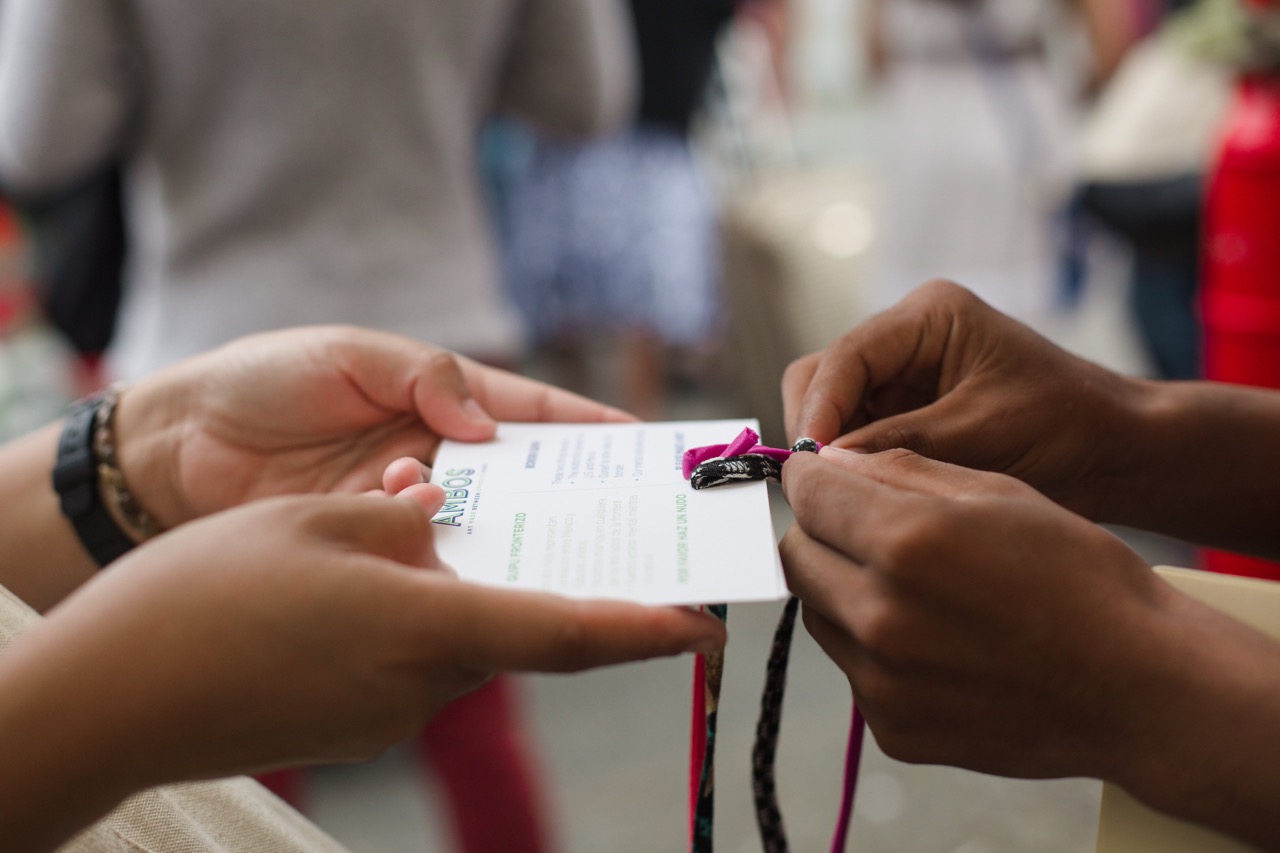 Though brief, the phrases span the tender and the traumatic; taking the form of an open-ended inquiry, the postcards serve as a complement to the questions printed on the staircase. “That I am crossing a city that completes me,” reads one, departing radically in tone from the hectoring words on the steps. Each postcard comes with two lengths of string, and respondents are asked to knot the strings together, as if binding the two countries; every quipu is an accumulation of knots from one day that have been tied into a massive, dangling entity. Aguiñiga hangs these conglomerations of knotted strings from the ceiling; they stream down and pool on the floor, each a testament to hours of handiwork, as well as centuries of mutually intertwining histories.

Julia Bryan-Wilson is Professor of Modern and Contemporary Art at the University of California, Berkeley, and the Director of Berkeley’s Arts Research Center; she is the author, most recently, of Fray: Art and Textile Politics (University of Chicago, 2017), which was awarded the 2018 Robert Motherwell Book Prize.