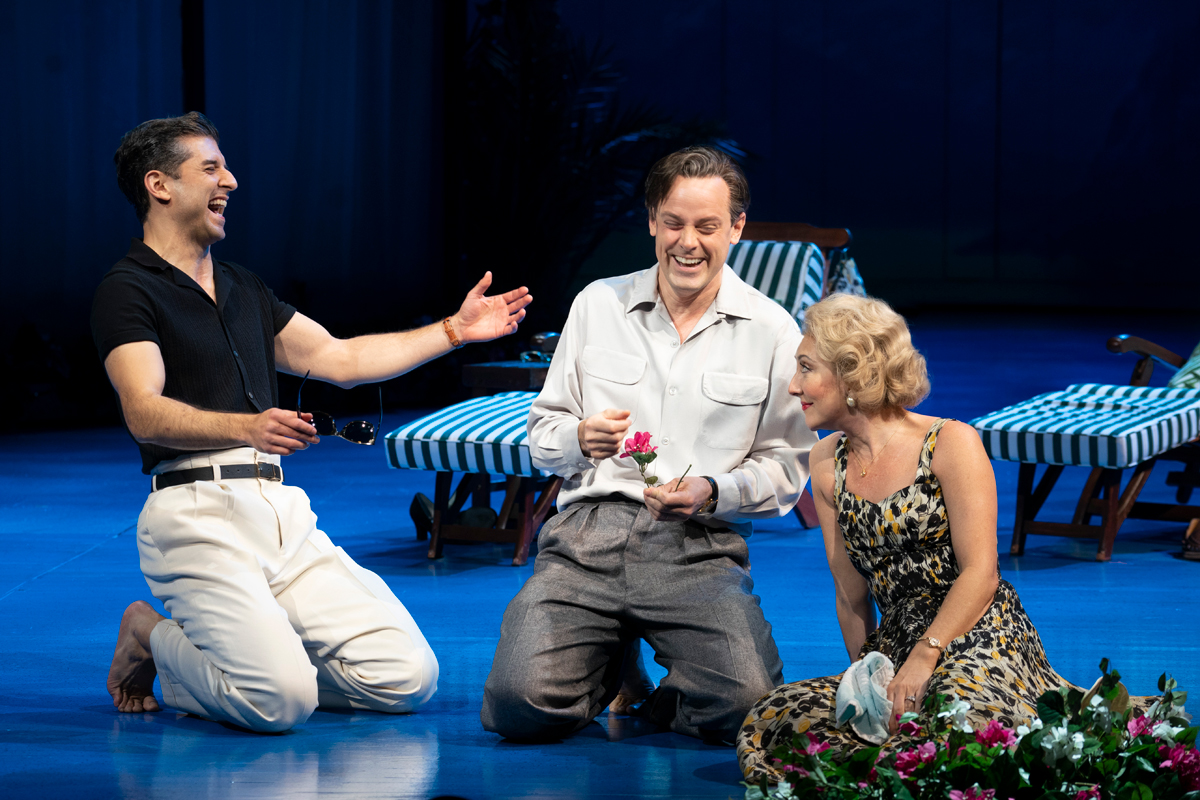 At their first meeting as potential collaborators in summer 1982, Stephen Sondheim offered James Lapine a marijuana cigarette. Neither the revered composer-lyricist nor the budding playwright had been particularly associated with drugs (although one obituary following Sondheim’s death last month described him as an “enthusiastic drinker”). Sondheim rolled a joint for Lapine simply because he assumed young people smoked pot all the time. So Sondheim says in Putting It Together, Lapine’s oral history about the making of Sunday in the Park with George. The two writers sparked up and chatted about movies, musicals, and, eventually, the Pointillist paintings of Georges Seurat.

Several shows and a war on drugs later, Lapine has clearly given thought to how mind-altering chemicals might be positively integrated into our lives, say, to deepen sensual appreciation or heal past trauma. Lincoln Center Theater has just opened Lapine’s latest musical as book writer and director, Flying Over Sunset, a period paean to the controlled use of LSD. What if, he asks, three LSD-dabbling celebrities in the 1950s—movie star Cary Grant, British author Aldous Huxley, and author-politician Clare Boothe Luce—dosed together one weekend in California? Imagine the zonked-out colloquies. A palate-baffling cuvée of Hollywood stargazing, psychodrama, and genteel dope humor, the subject and execution of Flying may be intensely fascinating to the creative team, but few others should expect a contact high.

In certain musicals and in overall career, you could say that Lapine has experienced “Act II trouble”—the term of art attached to many a rocky out-of-town tryout. His first two collaborations with Sondheim, Sunday in the Park with George and Into the Woods, were initially perceived as having strong first acts and disappointing stretches post-intermission. Dramaturgically, Lapine favored a leap in time or a subversion of established themes: Sunday fast-forwards a century in the art world; in Woods, the fairy-tale icons got their wishes, but now they’re miserable. Successive revivals have shown these early critiques to be overstated, and most viewers today can appreciate the dual-lobe approach.

In his professional arc, however, there’s a sense that Lapine started strong, but lost the way. It was a hot streak from 1984 to ’94: three Broadway premieres with Sondheim, as well as Falsettos with William Finn, a breakthrough gay musical. Although Lapine has continued to write and direct on Broadway and off, the lightning has evaded the bottle for quite some time. A musical adaptation of the indie film Little Miss Sunshine never got past a tepid 2013 run off Broadway. His straight play after Moss Hart’s theater-geek memoir Act One was solid, if niche. 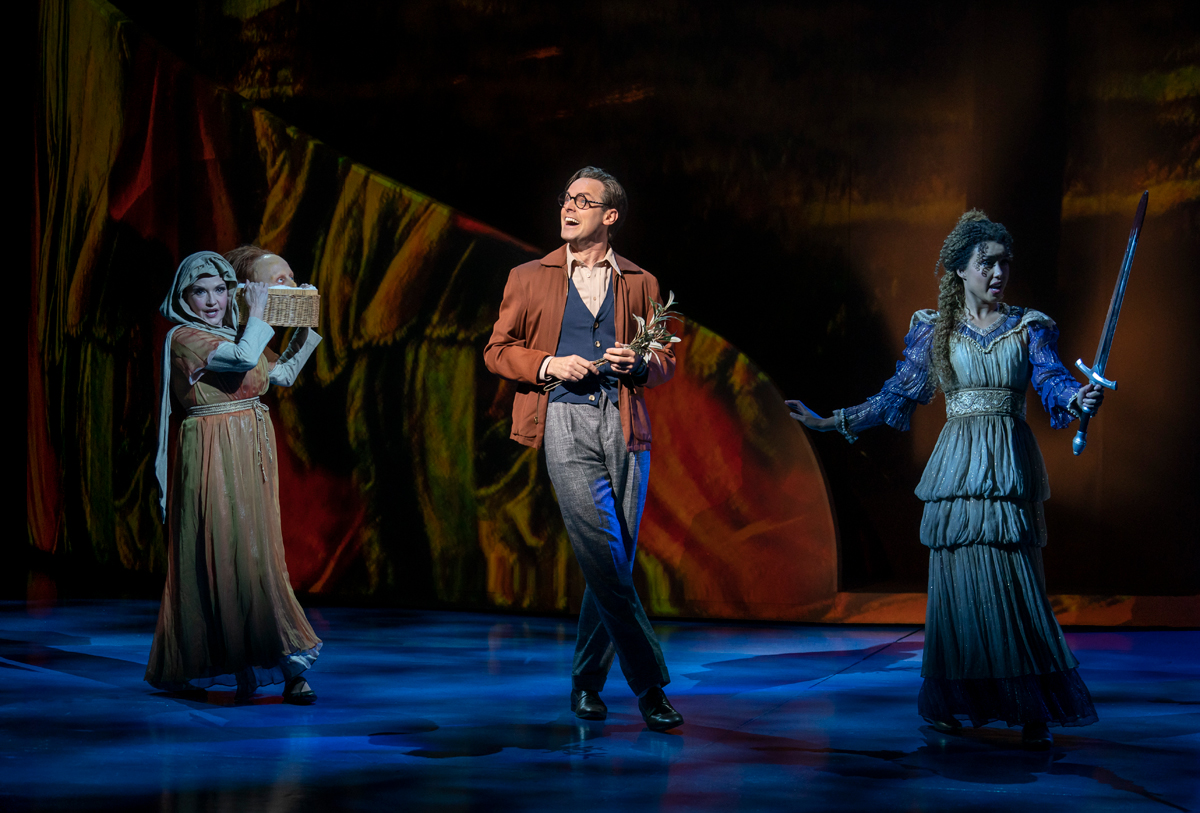 Flying Over Sunset doesn’t exactly suffer from Act II trouble; if only its problems were so contained. It begins by introducing us to its three protagonists in extended vignettes. Huxley (Harry Hadden-Paton), accompanied by his wife, Maria (Laura Shoop), and their philosopher friend, Gerald (Robert Sella), inspects shelves at a Hollywood drugstore as a drop of LSD takes effect (true story, apparently). Maria is picking up a prescription for breast cancer treatment, and Huxley becomes inordinately fascinated with a Botticelli art book. Soon, Judith with the Head of Holofernes has become flesh and parades through the Rexall while singing mock–bel canto. Huxley swerves from swooning over Renaissance colors to concern for his ailing wife and microscopic awe at the shabby state of Gerald’s trousers. “Cherish your trousers, Gerald,” Hadden-Paton croons at Sella, “Mend them tonight when you undress. Oh, isn’t eyesight wondrous?” 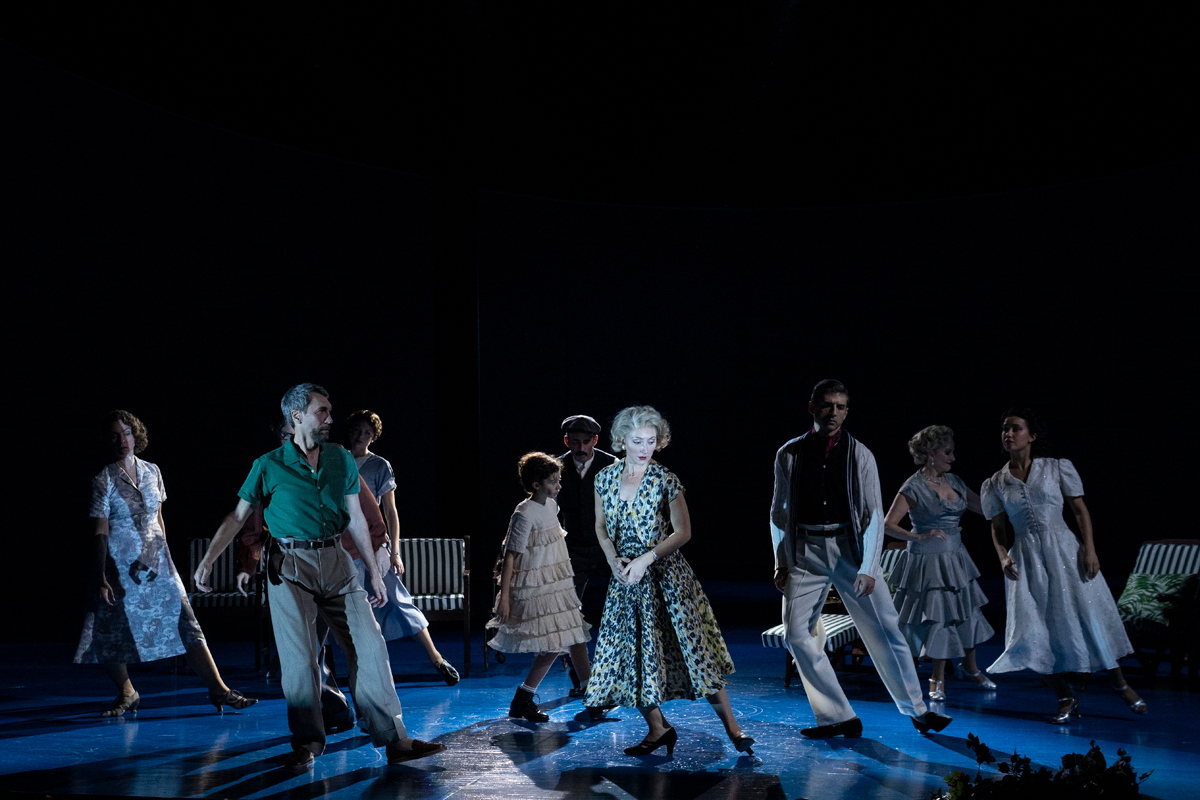 Fresh from that granular oddity, we follow Grant (Tony Yazbeck) paying a visit to his wife’s psychiatrist. The handsome star, flailing under depression and a rocky marriage, demands a taste of the “revelation” drug his wife is raving about. After some hemming and hawing, the good doc dissolves a drop of lysergic acid diethylamide in water, and before long Grant is haunted by visions of his youthful self (Atticus Ware), dressed as a girl by his mother, mocked by his bullying father (Nehal Joshi), and forced by poverty to dance and sing for pennies. Tom Kitt’s music and Michael Korie’s lyrics shift into English music-hall mode, which makes historical sense, but increases one’s fear that the creative team has no compelling or novel way to dramatize a drug experience. 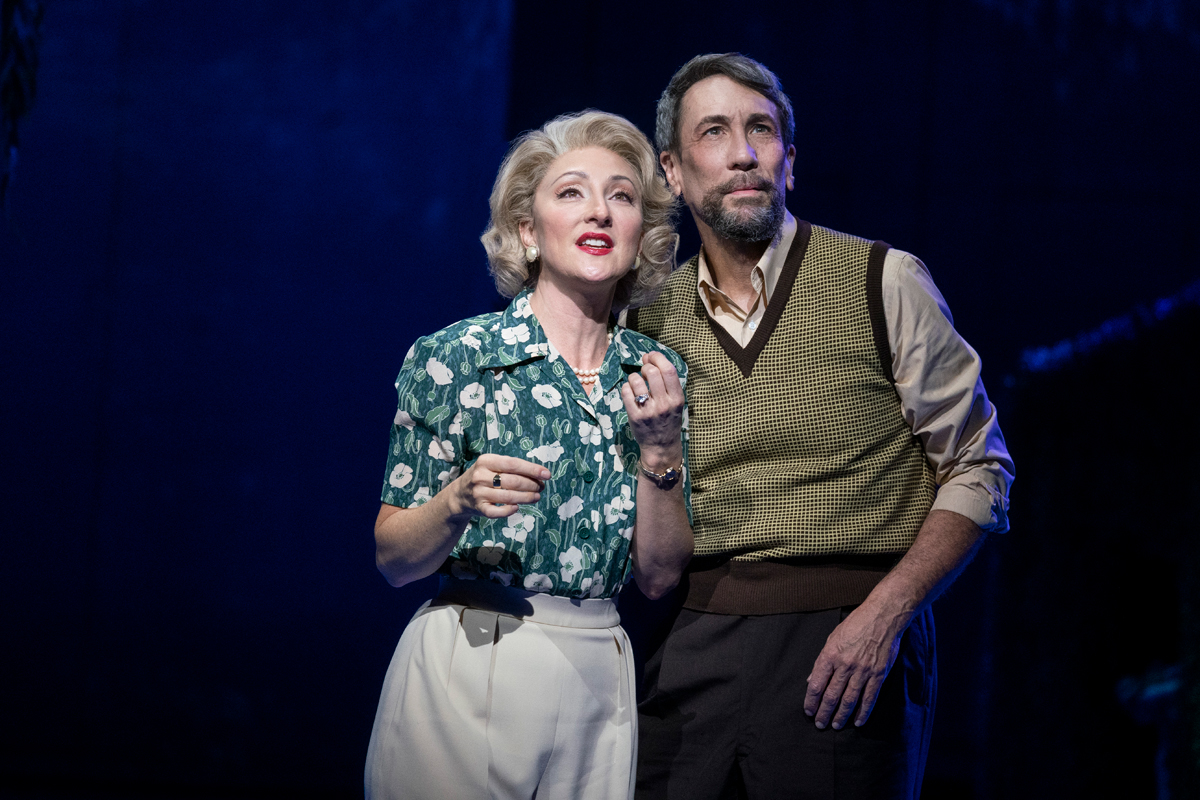 Finally, Luce (Carmen Cusack) meets with Gerald (remember him?) at her estate in Connecticut. Gerald, we learn, is an LSD enthusiast, big into chanting, eager to “guide” people on their spiritual journeys on the stuff. Luce is still grieving the deaths of her mother and her nineteen-year-old daughter, both in horrific car crashes. Easing blissfully into her session over fluttery strings and wistful brass, Luce rhapsodizes about the freedom of driving around the streets of Los Angeles, which gives the production its title, and the double sense of slipping gravity’s bonds. 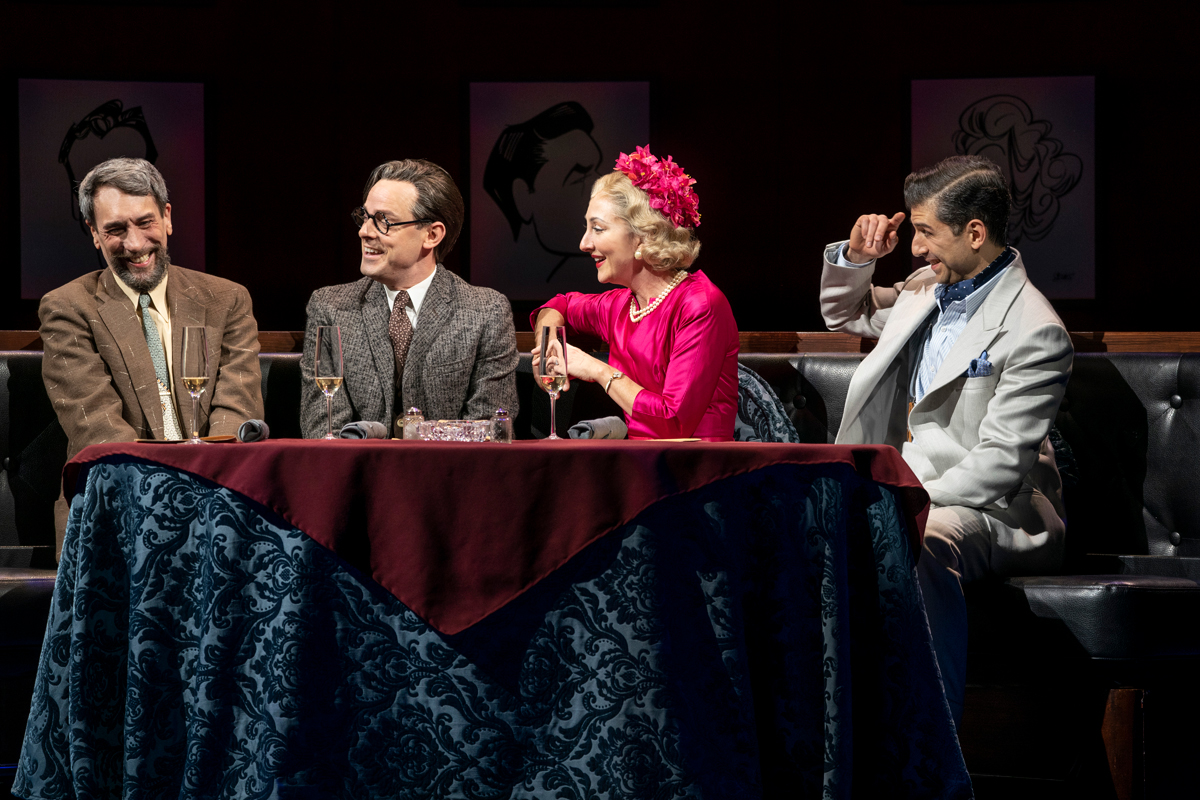 By the close of act 1 our three protagonists meet cute at Los Angeles restaurant the Brown Derby, discover a shared appreciation for LSD, and warily agree to Luce’s high-spirited suggestion of an exploratory weekend at her Malibu beach house. The second act covers their social interactions and drug experiences that day. This part of the story is a Lapine-Kitt-Korie invention, as our fancy protagonists ingest, freak out, swim a bit too far out, and face down their demons, convening afterward in a sunset scene that is less a grand finale than a tired hangover. 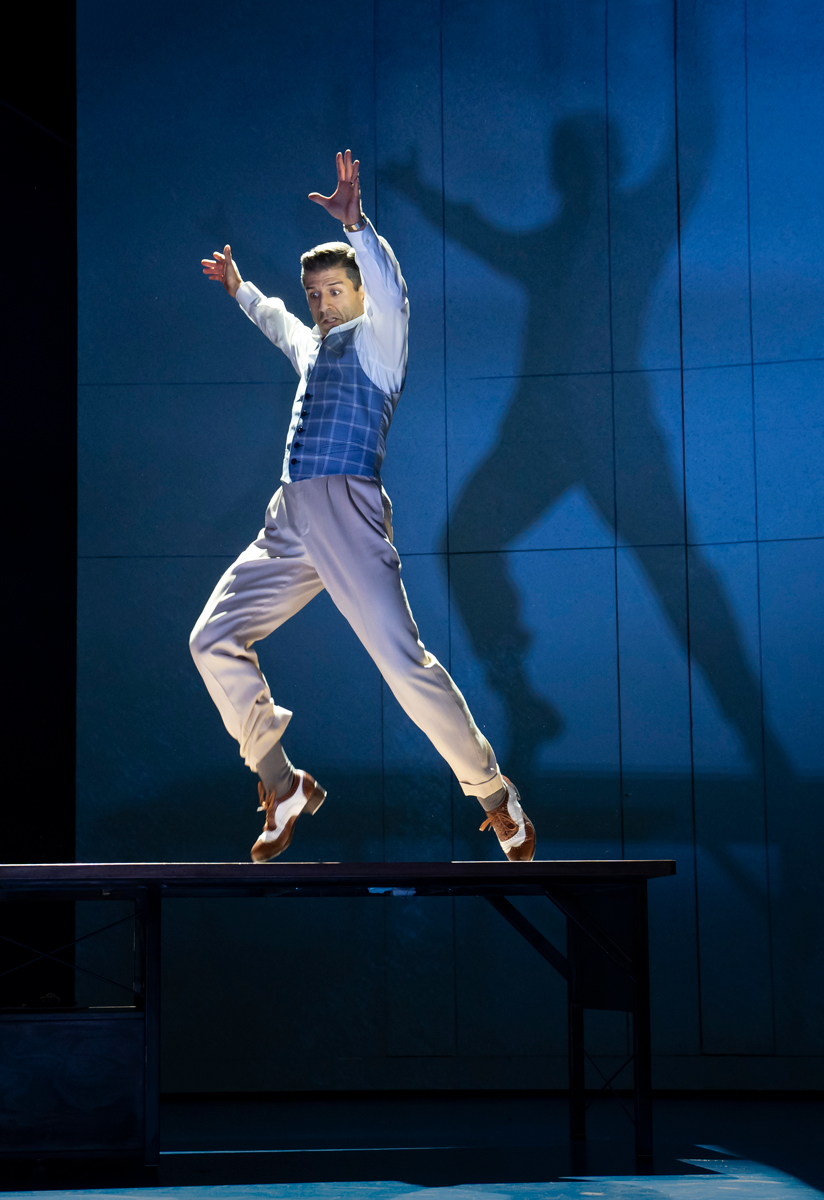 Of the leads, Cusack is the strongest singer, Yazbeck’s the hoofer, and dignified Hadden-Paton is best at pulling off Lapine’s leaden, expositional dialogue. There’s zesty choreography by Michelle Dorrance (especially for Emily Pynenburg as a young Sophia Loren), and swelling, immersive video (by 59 Productions) for a trippy dip in the Pacific. But this is one rambling, pointless head-scratcher of a show, not redeemed by the charm of its cast or the random bit of camp eccentricity, such as Yazbeck’s Grant whooshing around the stage declaring, “I am a giant penis rocket ship!” I’m sure it killed in rehearsal.

Sondheim (after a coinage by Mary Rodgers) would tag certain works “Why” musicals, as in, why did this story have to sing? Flying never answers the question satisfactorily. Had Lapine invited a truly experimental composer and lyricist to render the altered states of his characters in hallucinatory mode, we’d enjoy a stylistic break with reality. As it is, Kitt and Korie’s genre songs are so much uninspired sonic wallpaper. Alternatively, Lapine could have recounted this Hollywood footnote as a nonmusical play, put the onus on language and storytelling. Or better yet: do it as a movie, which could simulate period—and the visual and aural phantasmagoria of a mind on acid—better than theater ever could. Instead we have this expensive, nearly three-hour inner odyssey in which sad, famous people trip balls by the sea. You could keep asking why, or you could put on TCM and pack a bowl.