An old-school approach to the famed artist’s portraiture.

Cézanne Portraits, at the National Gallery in Washington, is indeed, as the curators claim proudly, “the first major museum exhibition” devoted to the portraits of Paul Cézanne, an artist more famous for his shimmering landscapes, still lifes, and bathers. The genre was a modest but persistent presence in the French postimpressionist’s career—fewer than two hundred of the thousand or so canvases he produced in a lifetime (about sixty of which are assembled here). The show, which had previous stops at the Musée d’Orsay in Paris and the National Portrait Gallery in London, was conceived by the Cézanne specialist Philip Conisbee (just before he died), along with the former head of exhibitions at the NPG London, Sandy Nairne; it was executed by a team headed by John Elderfield, curator emeritus at the Museum of Modern Art in New York. As one would expect from the scholars and institutions involved, it offers a host of connoisseurial insights regarding a specific facet of Cézanne’s career.

We are invited by the curators to step into the painter’s mind, to parse his decision-making in the studio, to recognize the small and perhaps slightly less small changes that occurred within series and over time, to focus our attention on the minutiae of his practice—to immerse ourselves completely in Cézanne. Or rather, in a particular, unsurprising version of Cézanne as the father of modern art whose unrelenting focus on the translation of the three-dimensional world onto a flat canvas seemed to eschew anything so pesky as politics or human connection or social consciousness. But why this Cézanne now? In 2018, at a time of rising white supremacy and culture wars–driven conservatism, this approach to the artist is, at best, a lost opportunity and, at worst, an insidious doubling down on European modernism as the gold standard of cultural value. 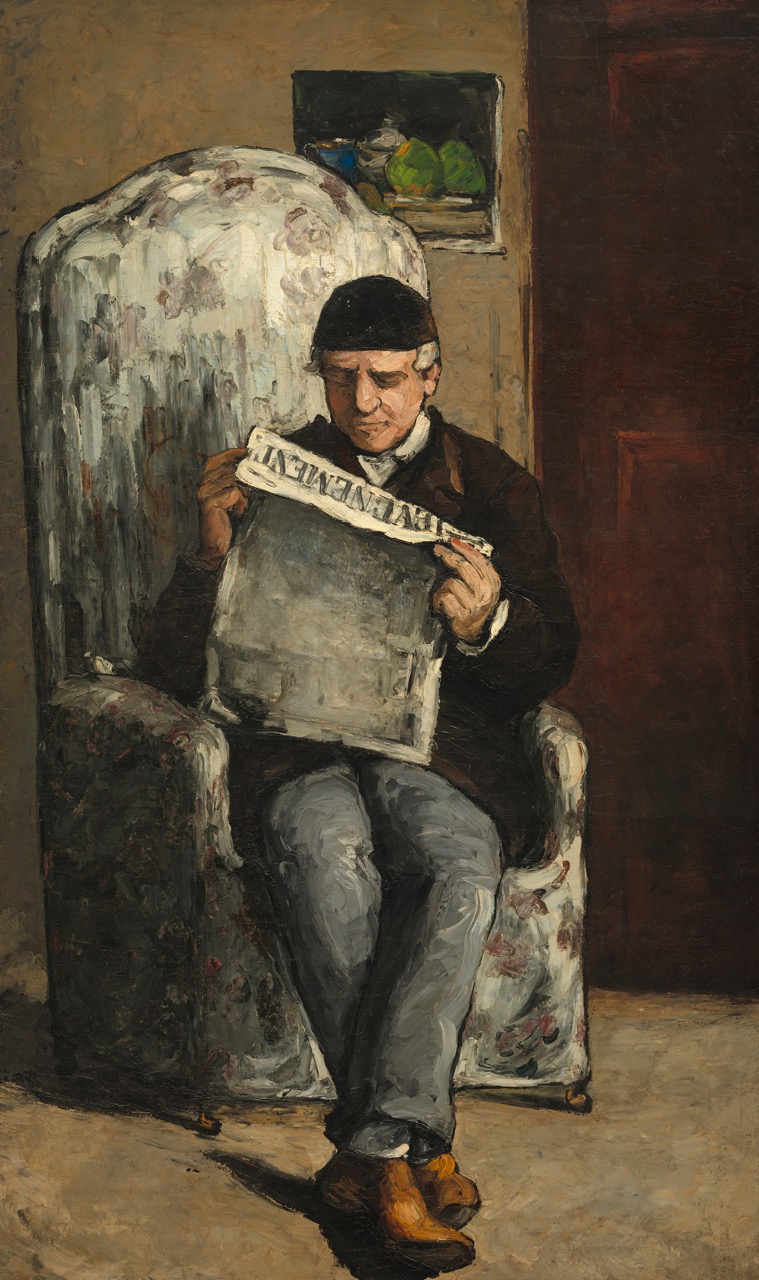 The photographs of first ladies Melania Trump and Brigitte Macron in the galleries during the French president’s state visit last month pointed up the way Cézanne has been neutered, how he can serve as an artist safe for even the most anti-intellectual presidency. But how unjust this is! Cézanne’s work has things to say, more than a century after the painter’s death. There is still, for example, a whiff of revolution in Cézanne’s early portrait of his father (c. 1866), a study of flawed patriarchal authority. Cézanne père—a self-made man, someone Émile Zola (Paul’s childhood friend) described as “mocking, republican, bourgeois, cold, meticulous, stingy”—is shown wearing his slippers and reading a newspaper, ensconced in a flowery armchair. The canvas is thick with tarry blacks and rancid, oleaginous whites applied with a palette knife, as was the painter’s wont in his so-called couillard—or “ballsy”—early style, fashioned as an exaggerated tribute to the radical Realist artist Gustave Courbet. 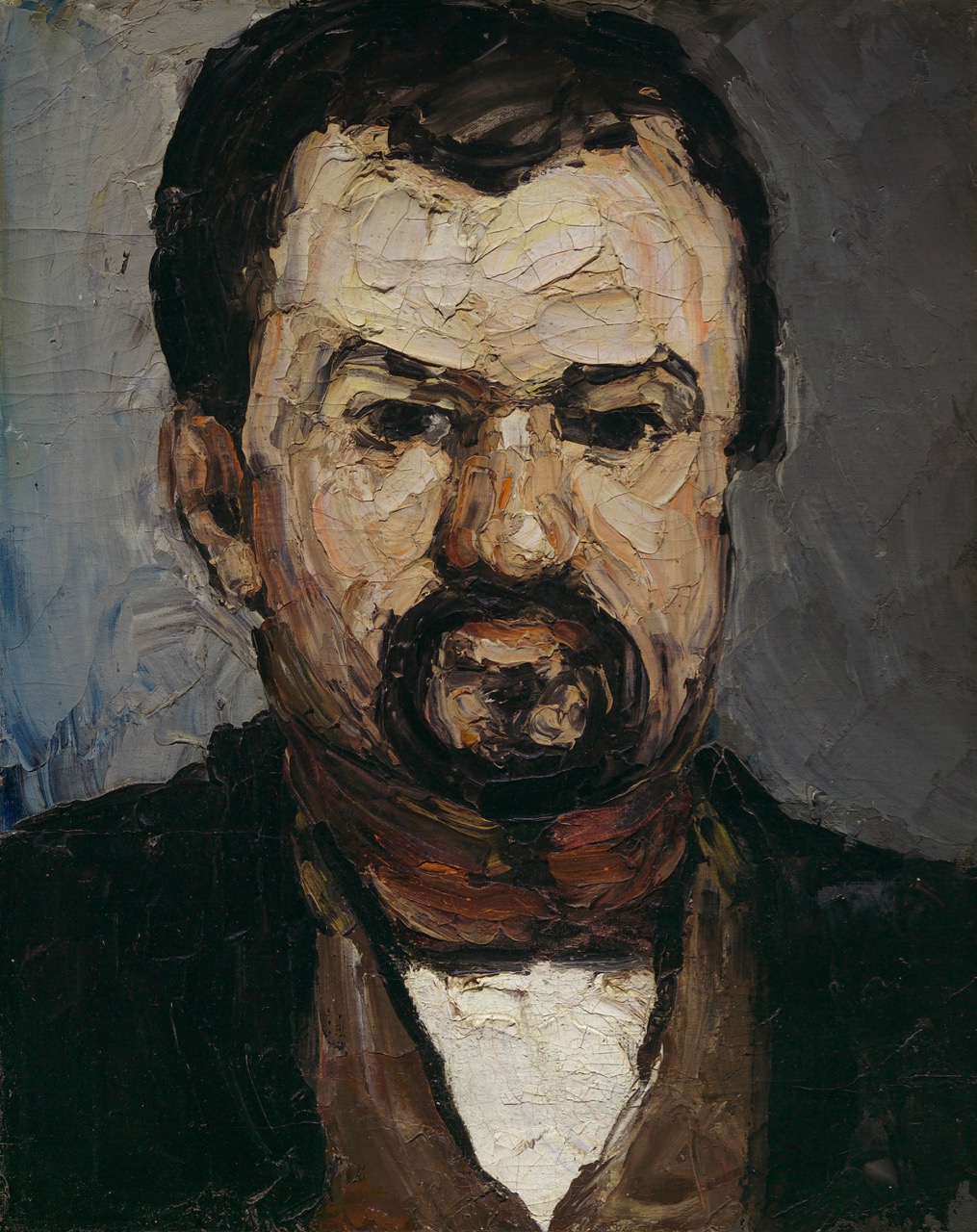 Hung in a room alongside pictures of Victor Chocquet, Antony Valabrègue, and Zola—some of Cézanne’s biggest supporters in the early years of his career—the portrait of Cézanne’s father appears respectful enough, even a display of gratitude. But had the curators chosen to hang it nearer to Cézanne’s early series of pictures of Uncle Dominique (1866–67), in which his mother’s brother is depicted as a monk, as a lawyer, as a bourgeois banker (all careers that Cézanne père wished for his son above that of artist), or had the extraordinary Portrait of Achille Emperaire (1867–68) made the trip to Washington—in which the slightly ridiculous aspiring local painter, a hunchbacked dwarf no less, sits in the same armchair with the gravitas of Napoleon on his throne—the equivocation of Cézanne’s view of his father, even the subtle mockery, might have become more apparent. 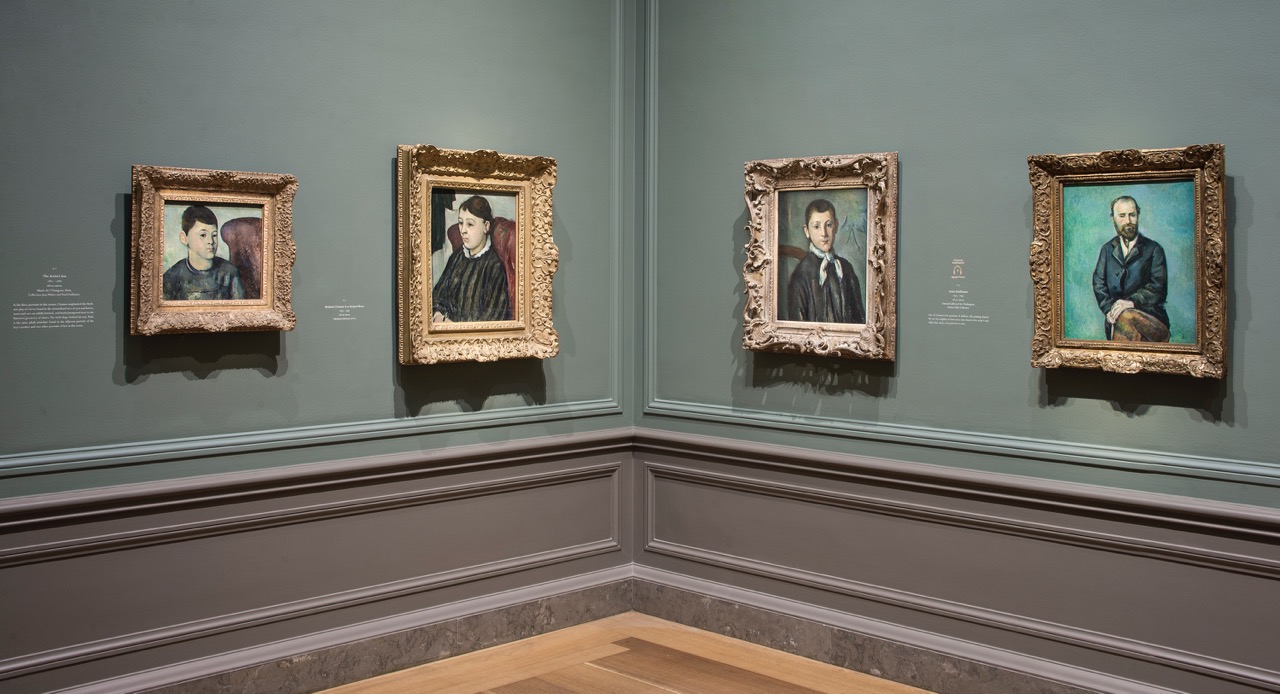 Due to his independence from the market, at first because of his truculent refusal to make sellable paintings and then because of his inherited wealth, Cézanne, unusually for a portraitist, never accepted a commission. Instead, he chose his subjects from those around him—friends and family, workers on his father’s (and then his) estate in Aix-en-Provence, local laborers and their families, the rare art dealer or critic who managed to gain his trust. The standard scholarly line has long been that Cézanne was not so much interested in his subjects as in the formal challenge of rendering them—that he painted people no differently than he would an apple. The exhibition pays lip service to dispelling this hoary chestnut, but it more often than not reverts back to a deeply formalist analysis of the pictures on view. Nonetheless, bringing together the works allows us to perceive a different kind of connection between Cézanne and his close circle of sitters—particularly in the fourteen of the twenty-seven or so paintings he made of his wife, Hortense Fiquet. 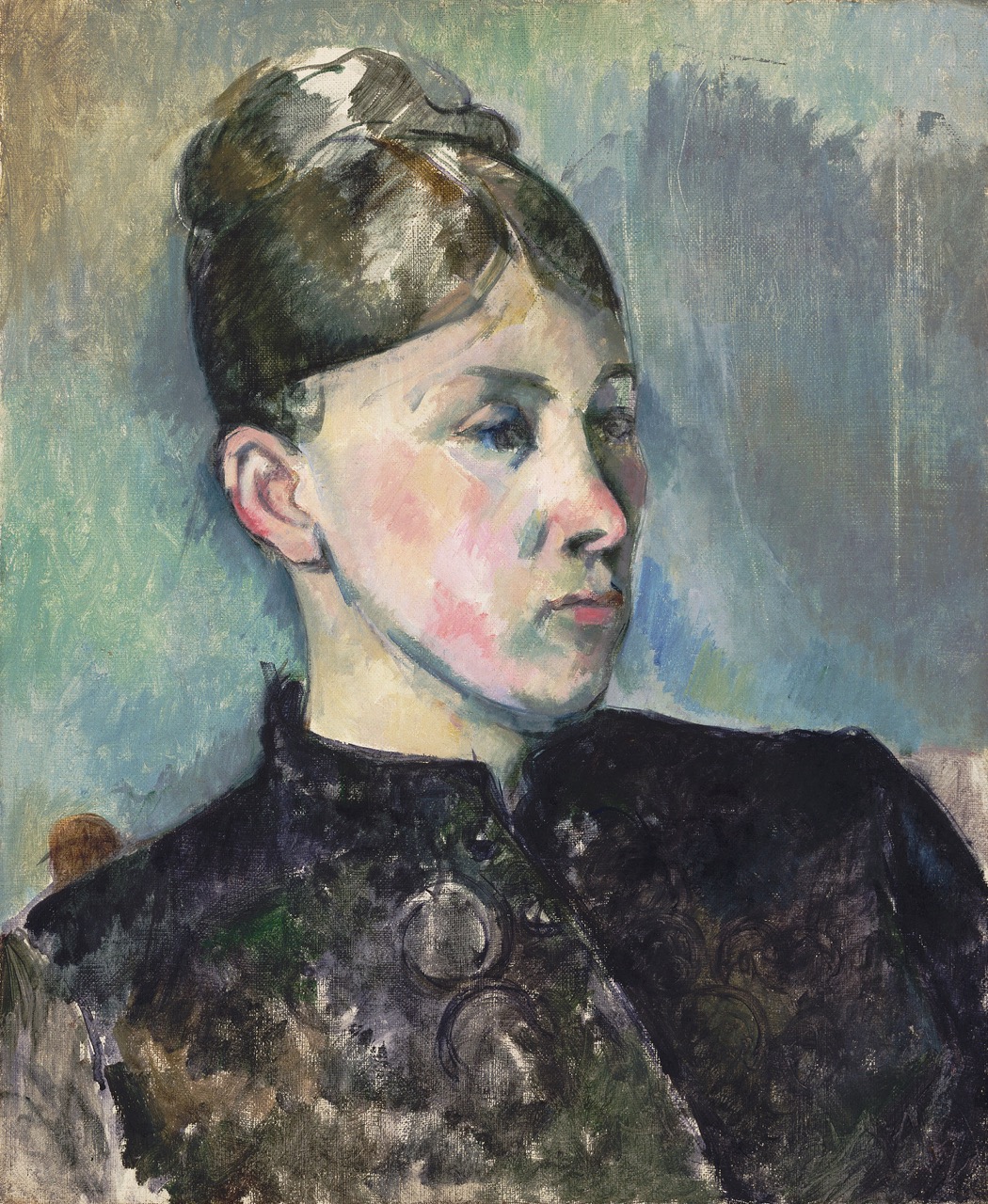 A series of relatively small canvases he did of Fiquet in the mid-1880s demonstrates the depth of feeling that Cézanne’s otherwise analytic approach could elicit. She wears the same dress in two of the pictures—a dark blue, high-collared affair with swirls of embroidery on the placket. (In Cézanne’s hand, the whirling needlework detaches from the garment and takes on a life of its own, a surface pattern that energizes the otherwise calm painting.) What’s different in each is Fiquet’s pose, and also, startlingly, her very physiognomy—the shape of her nose, the contour of her jaw, etc. It is impossible from these (or, indeed, any of the various images of her he produced) to glean what she really looked like. Fiquet is hardly a cipher in Cézanne’s hands, though: the softened brushwork around the eyes, the disappointment conveyed by the blurred, slightly downturned mouth, the distraction or outright boredom of her expression persist, even as he moves to a more structured, monumental approach to portraiture in the 1890s. These constitute a quite different mode of painterly verisimilitude—one based on affect, rather than resemblance. 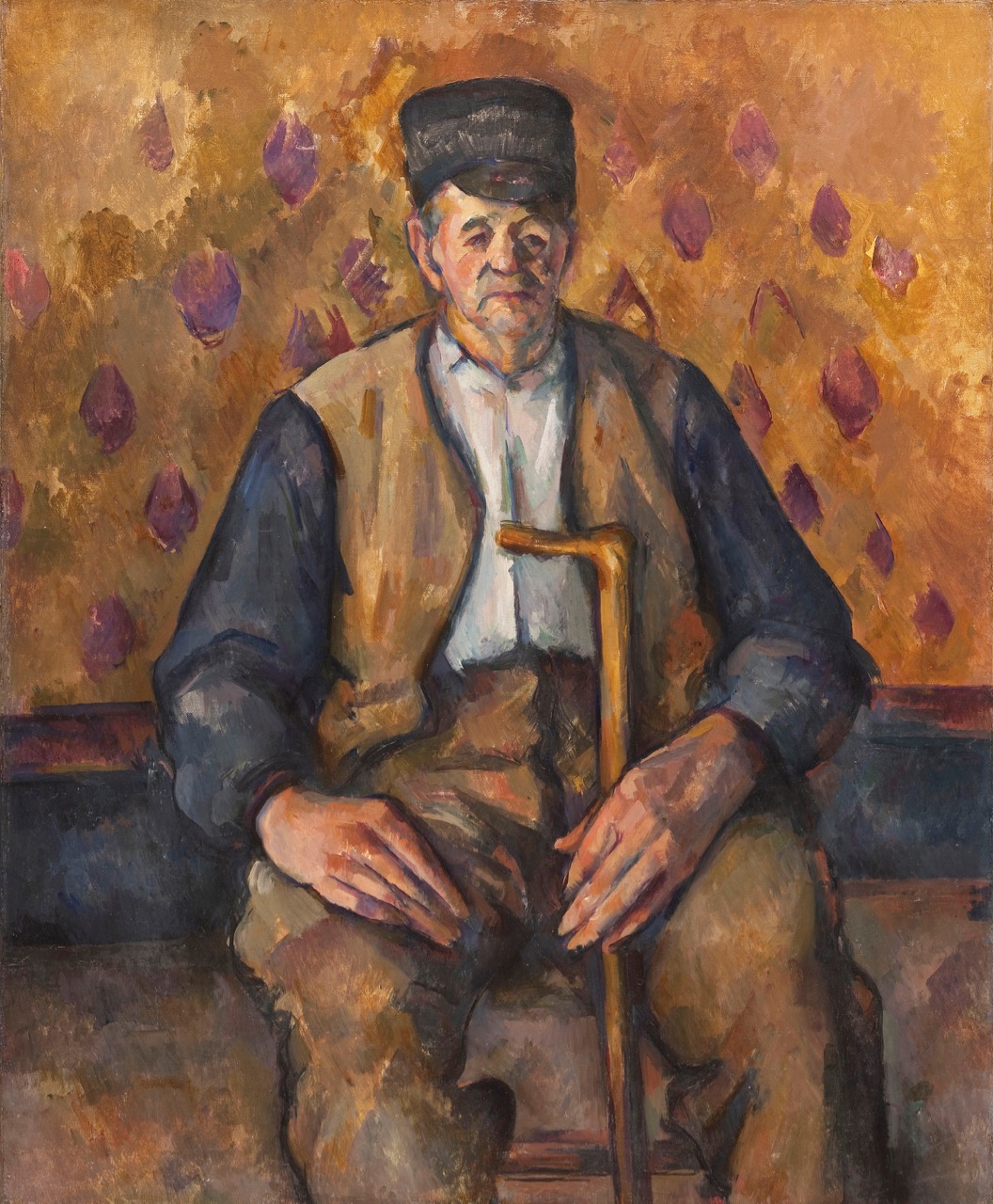 The tenderness in a husband’s recognition of his wife’s disaffection; the poetic reveries of laborers in their working-class overalls; the decrepitude of an aging gardener whose face disintegrates under thick, scumbled brushwork; the mountainous, dignified solidity of peasants: even these poignant moments were not enough, to my eye. As I made my way through the galleries, I longed for a show that would connect Cézanne’s painting to the urgency of the moment—to the current explosion of portraiture among young painters, especially artists of color, say, or to a political landscape in which we need to constantly challenge authority—rather than the isolated singularity of this artist’s genius and his reinscription as the father of modern art. If we need Cézanne right now, we need a different Cézanne than the one in Cézanne Portraits. We need the Cézanne that some of today’s most resonant artists see when they draw upon his work in their own: the conjurer of moody pathos that Lynette Yiadom-Boakye evokes when she paints portraits of fictional subjects that force us to imagine blackness differently; the playful, iconoclastic lover of visual puns that sculptor Rachel Harrison thinks about when she creates her strange, abject altars to celebrity culture. We need the Cézanne that undoes tradition, rather than the one that curators repeatedly present in order to uphold it. Those Cézannes are there, in the oeuvre, as are countless others. The challenge, and the pleasure, and the consequence, will be to find them.