In a video installation, the artist and filmmaker ruminates on
Frederick Douglass—and his meaning for us today. 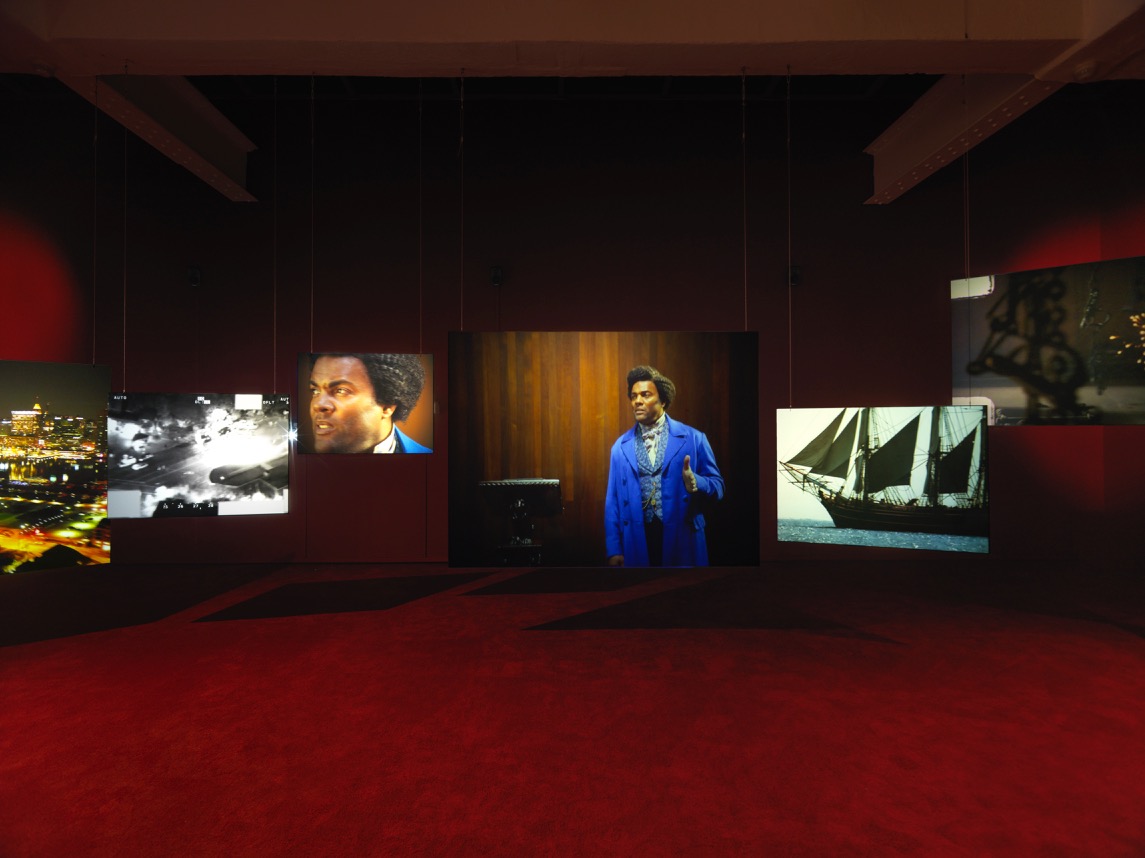 To contend with the meaning and legacy of Frederick Douglass, as the British artist-filmmaker Isaac Julien does in his video installation Lessons of the Hour (2019), is to contend with the aesthetic, conceptual, and political meanings of photography. The abolitionist and orator escaped slavery in 1838, fought for its end, and spent the rest of his life lecturing all over the US and Europe to bring attention to the long, slow, and ongoing process of freedom for black Americans. He was, too, the most photographed American of the nineteenth century; to further his political message, he took advantage of the newly invented medium to shape his own image, posing for some 160 portraits and widely distributed carte de visite pictures. (He was not alone in this: Sojourner Truth, Harriet Tubman, and other activists of the age were also using photography as a tool in the fight against slavery, racism, and segregation.) As photography became cheaper and more widely available, Douglass argued in his writings and speeches, it would allow for all black people to picture themselves as they were, as full citizens who defied the ugly stereotypes created (often by means of photography, as well) to control and dehumanize them.

The twenty-eight-minute Lessons of the Hour, arrayed on ten differently sized screens mounted at various heights and angles and arranged in a semicircle, uses one lens-based technology (film, here shot both in analog and digital) to explore another (photography). Visually, it is signature Julien: like his lush, sensual Looking for Langston, a 1989 meditation on black queer experience in the Harlem Renaissance, or the enigmatic Western Union: Small Boats, a 2007 film installation following North African migrants across the Mediterranean, Lessons is breathtakingly beautiful, rich in color, and scored in the most evocative way. At the beginning of the film, an actor portraying Douglass walks to a podium in a nineteenth-century lecture theater, wearing a royal blue coat; on most of the screens we see him from the back, on some others from the front. The words the actor delivers—at first to a rapt, largely white audience and then intermittently as background narration while other images appear onscreen—are passages from three of Douglass’s most significant speeches: “What to the Slave Is the Fourth of July” (1852), “Lecture on Pictures” (1861), and “Lessons of the Hour” (1894). 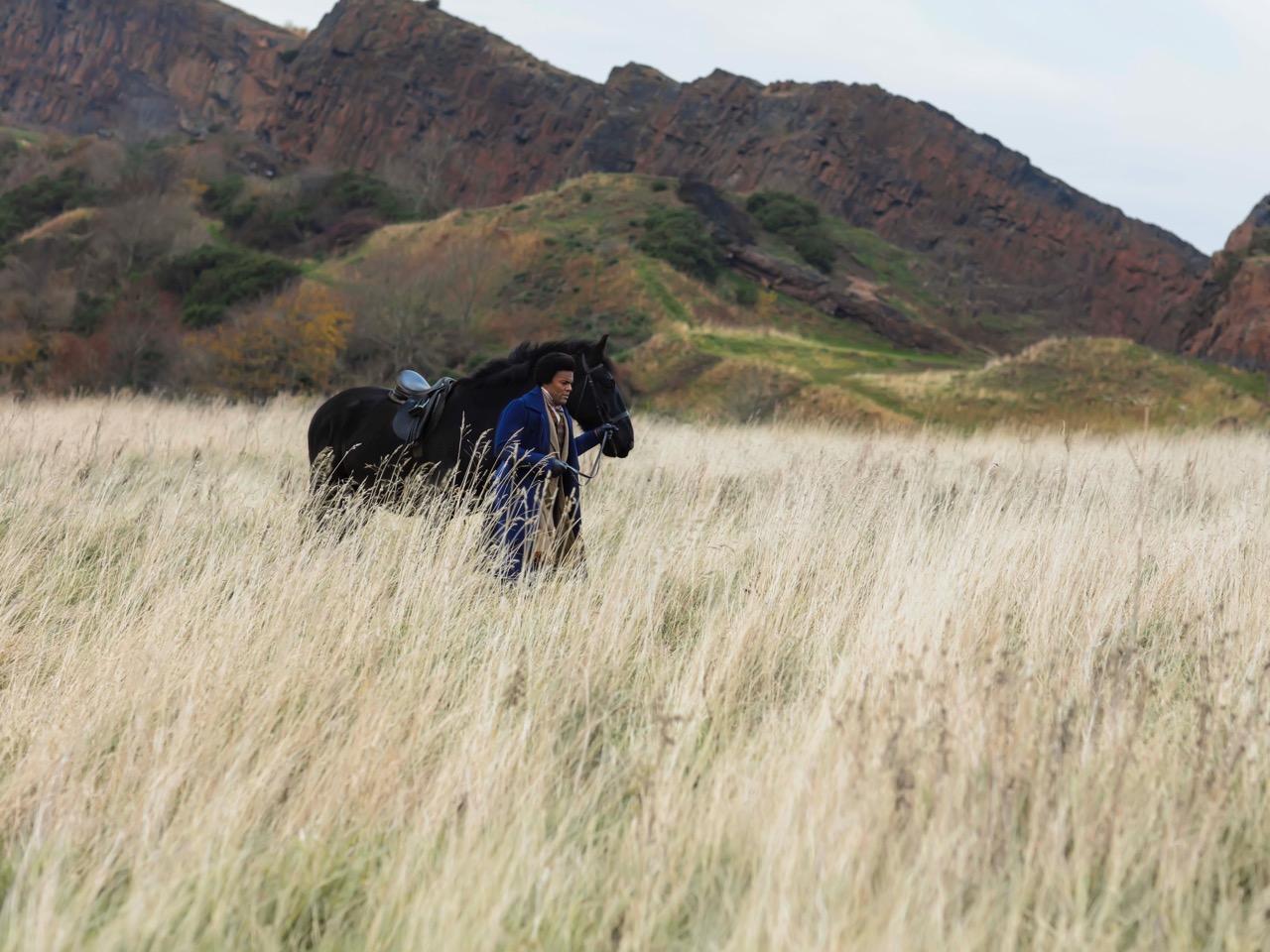 After some minutes, these lecture hall shots give way to others, in which characters move with such slow deliberation that they hover between cinema and tableaux vivant: Douglass leading a horse through a field of tall, yellow grass; his first wife, Anna Murray Douglass, carefully, even mournfully, sewing the blue coat that Douglass wears; his second wife, the white abolitionist Helen Pitts, writing in her study, looking like something out of a Vermeer painting; the English activists Anna and Ellen Richardson, reading from their diaries while arranging rocks on the beach to spell out anti-slavery slogans; Douglass and Anna Murray in a train car, chugging their way across country; the black photographer J. P. Ball—the man with whom Douglass collaborated to fashion his public image—in Ball’s studio, demonstrating his instruments and optical devices to visitors. 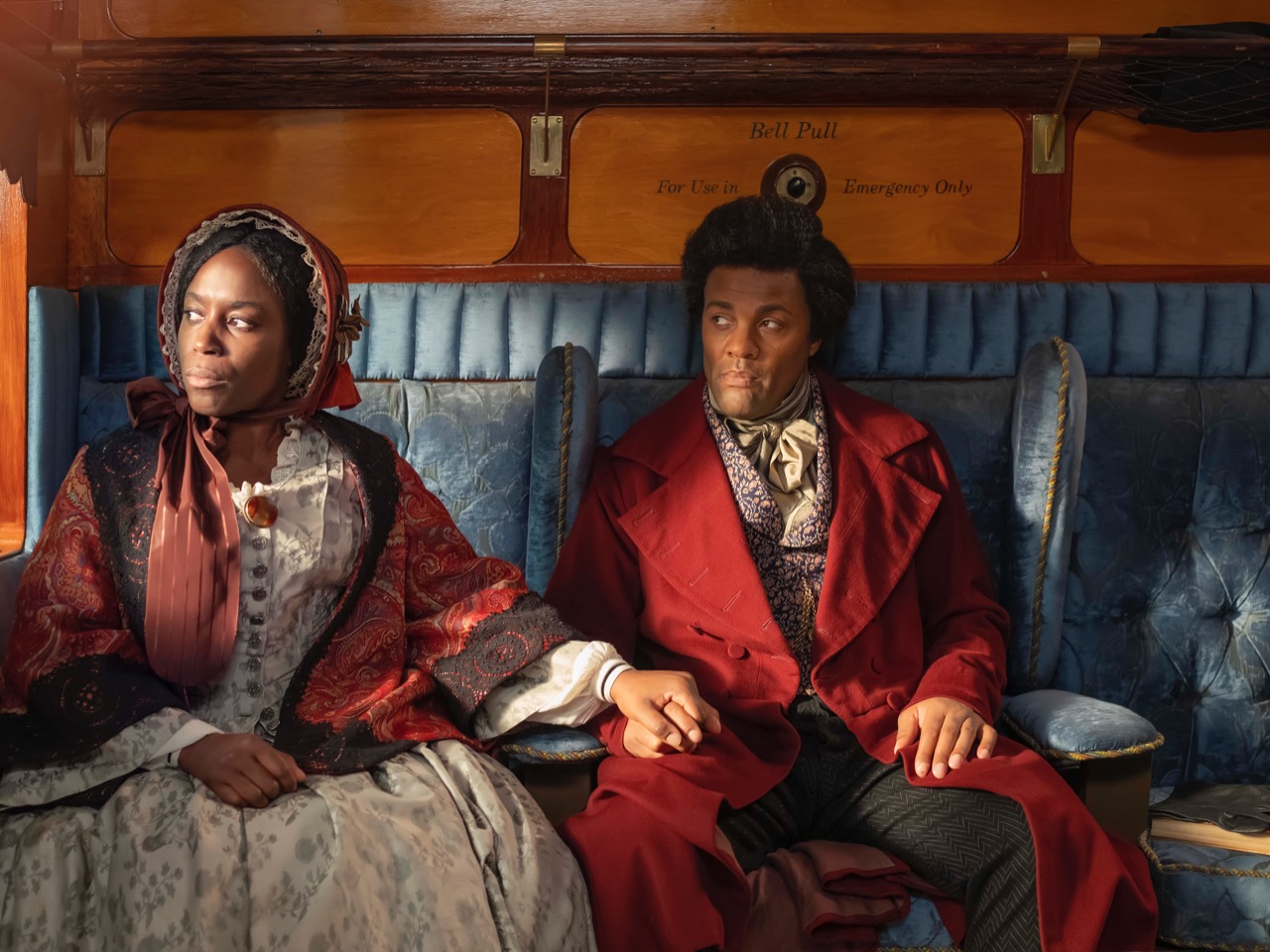 But no matter the beauty of these representations, or the raw delight of the archival films and photographs that make momentary appearances in this fragmented montage-in-space, we are repeatedly pulled back to harsh realities. Over shots of Douglass walking through a stand of trees in full autumn glory with birds whistling in the distance, we hear a foreboding score (by composer Paul Gladstone Reid), and then Douglass’s words describing the unbearable violence of lynching. One screen cuts to a black-and-white image of hands hoisting a heavy load with a rope, and then dark-skinned feet dangling. At another point, screens suddenly switch, each at the sound of a whip’s crack, from images of Douglass and his circle as cosmopolitan moderns—using the latest technologies, ranging from the sewing machine to the steam engine to the camera, sitting in fashionable salons, treated with respect and even reverence—to those of cotton fields, bolls being picked from thorny bushes by disembodied hands. The effect is simultaneously, and troublingly, brutal and gorgeous. 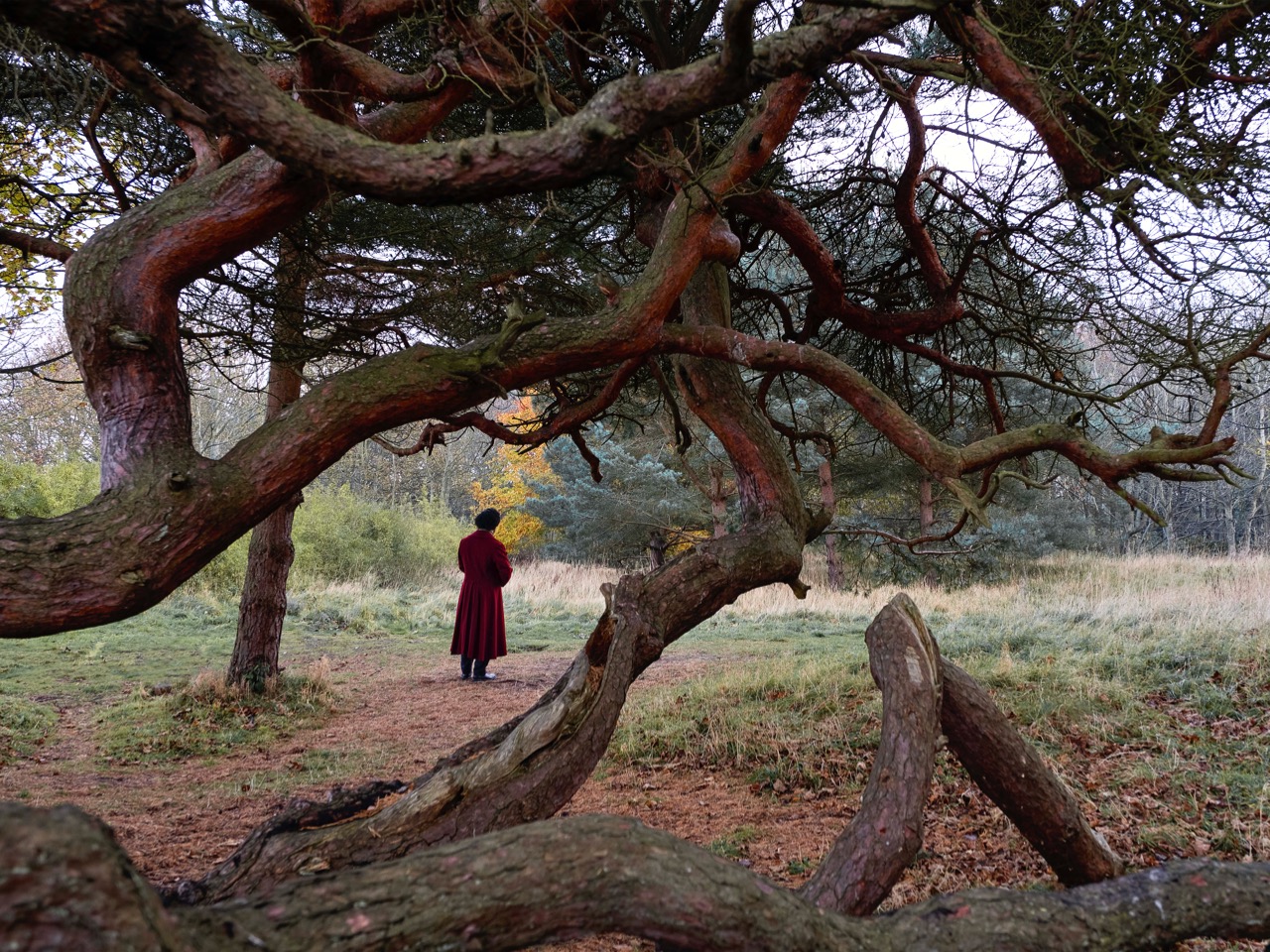 These harsh realities are not contained in the past. Julien’s project blurs the boundaries between the era of slavery and its aftermath, as is only fitting, considering his subject. When Douglass delivered his final speech, “Lessons of the Hour,” in Washington, DC twenty-nine years after the legal end of slavery in 1865, he spoke of the ways in which emancipation was a process both fraught and incomplete—black people still weren’t free while physical, economic, and psychological violence continued. Back then, Douglass was speaking of sharecropping, lynching, segregation, and proposals to send freed slaves back to Africa; now, Julien points out, it is the power of the surveillance state to police and kill black people that stands in the way of equality and justice. 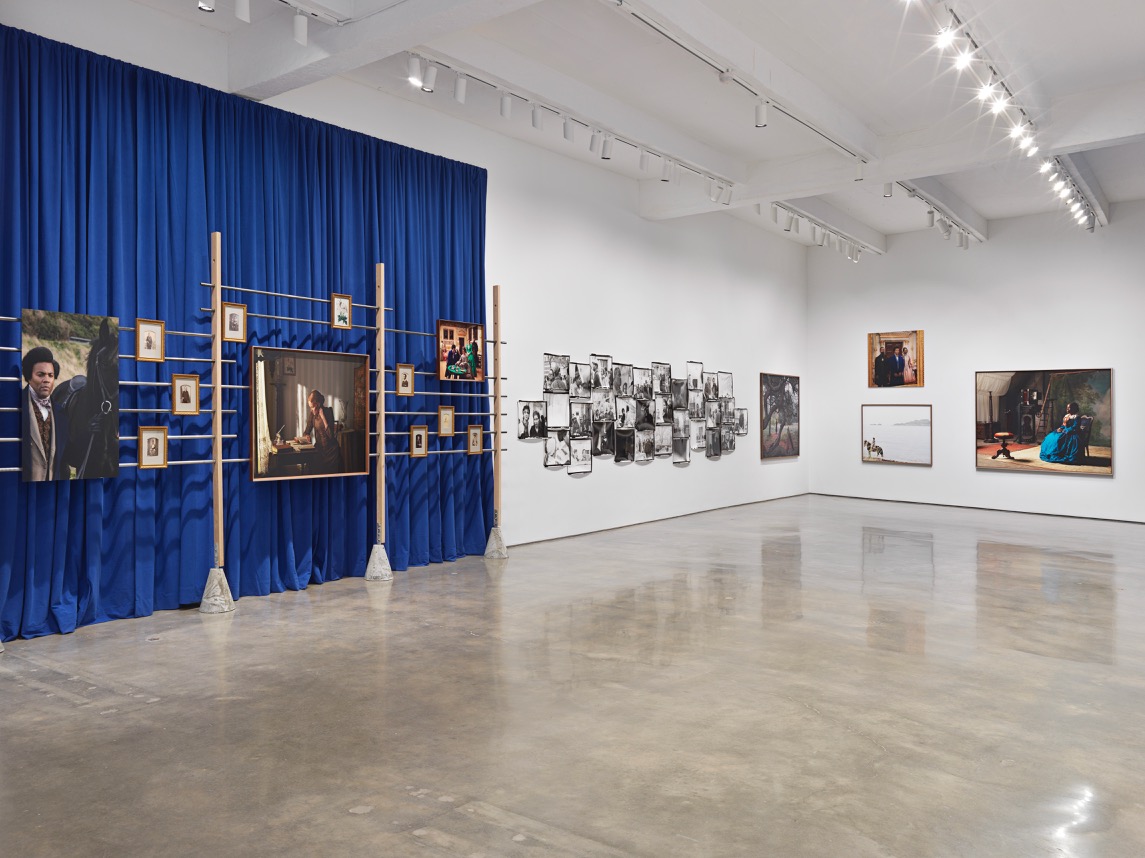 This idea is evoked even before we lay eyes on Lessons of the Hour itself. The film is installed in a darkened room at the back of the gallery; before we see it, we pass through a room of more than sixty photographs of various sizes, hung directly on the walls or on metal and wooden armatures that look vaguely like something used for museum storage. These include cinematic stills, old-fashioned-looking (but recently made) tintypes of the film’s actors in character, and found nineteenth-century photos that the artist has recast as an imaginary archive of Ball’s studio output—both simulacral and real relics of the past. But they also include a tightly hung grouping of thirty-two black-and-white images connected to Julien’s early 1983 film Who Killed Colin Roach? about the unexplained death of a black man at a police station in London. The pictures are here titled Lessons of the Hour London, tying them firmly to Douglass’s arguments of more than a century past. 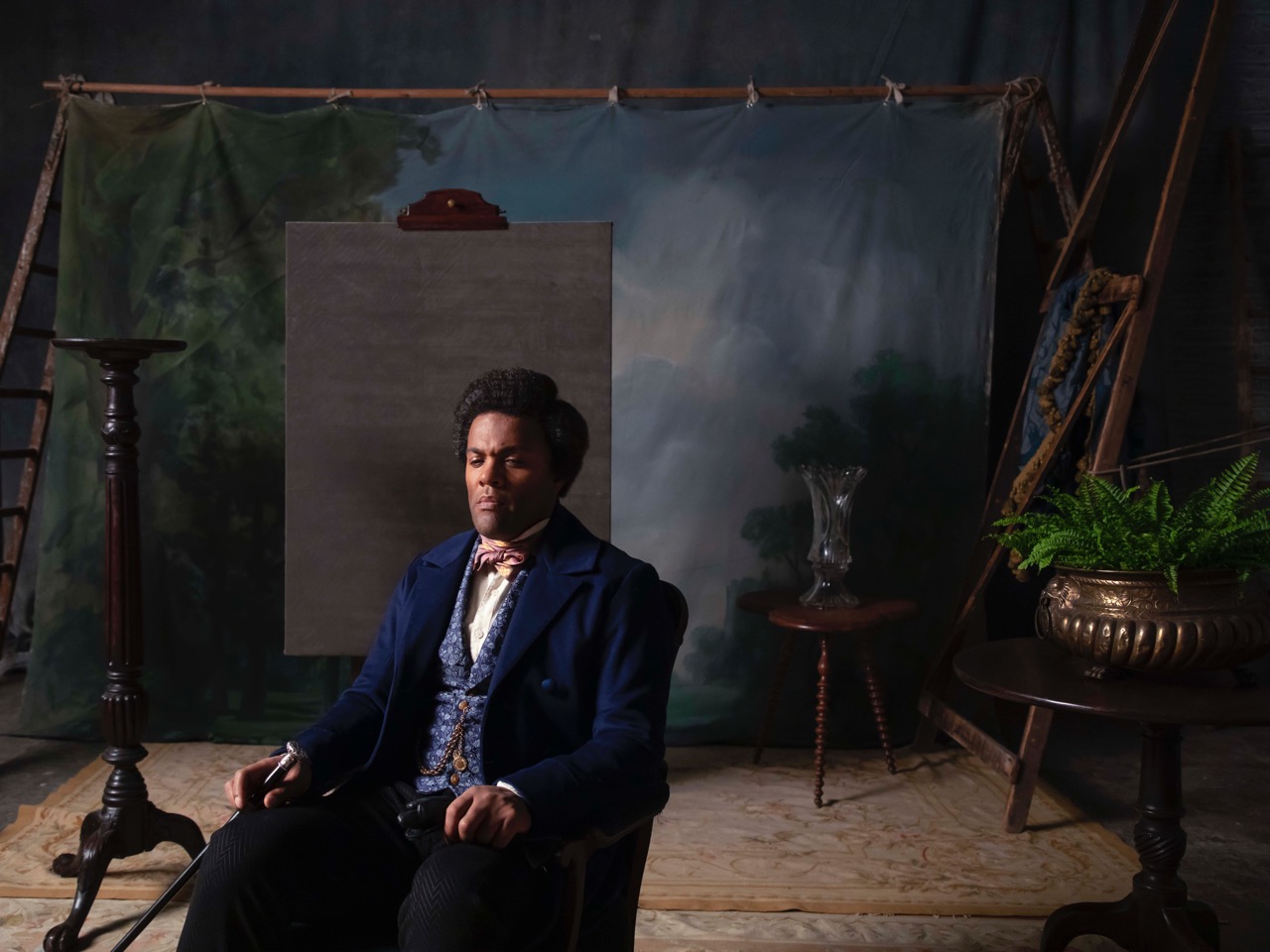 In a similar move, the video installation creates stark contrasts between scenes of Douglass and others confidently posing in Ball’s studio, controlling their self-imaging, and grainy, black-and-white FBI footage and video clips of the civil unrest that took place in Baltimore in 2015, sparked by the death of Freddie Gray while in police custody. In the film’s opening scenes, Douglass intones that image making is even more potent than lawmaking to change the direction of his country. When you notice that his audience is composed both of people dressed in Victorian garb as well as those in today’s fashions, the implication is clear: his are the lessons of our hour, his is a manifesto for our resistance, his is a call for us to reclaim the power of representation.