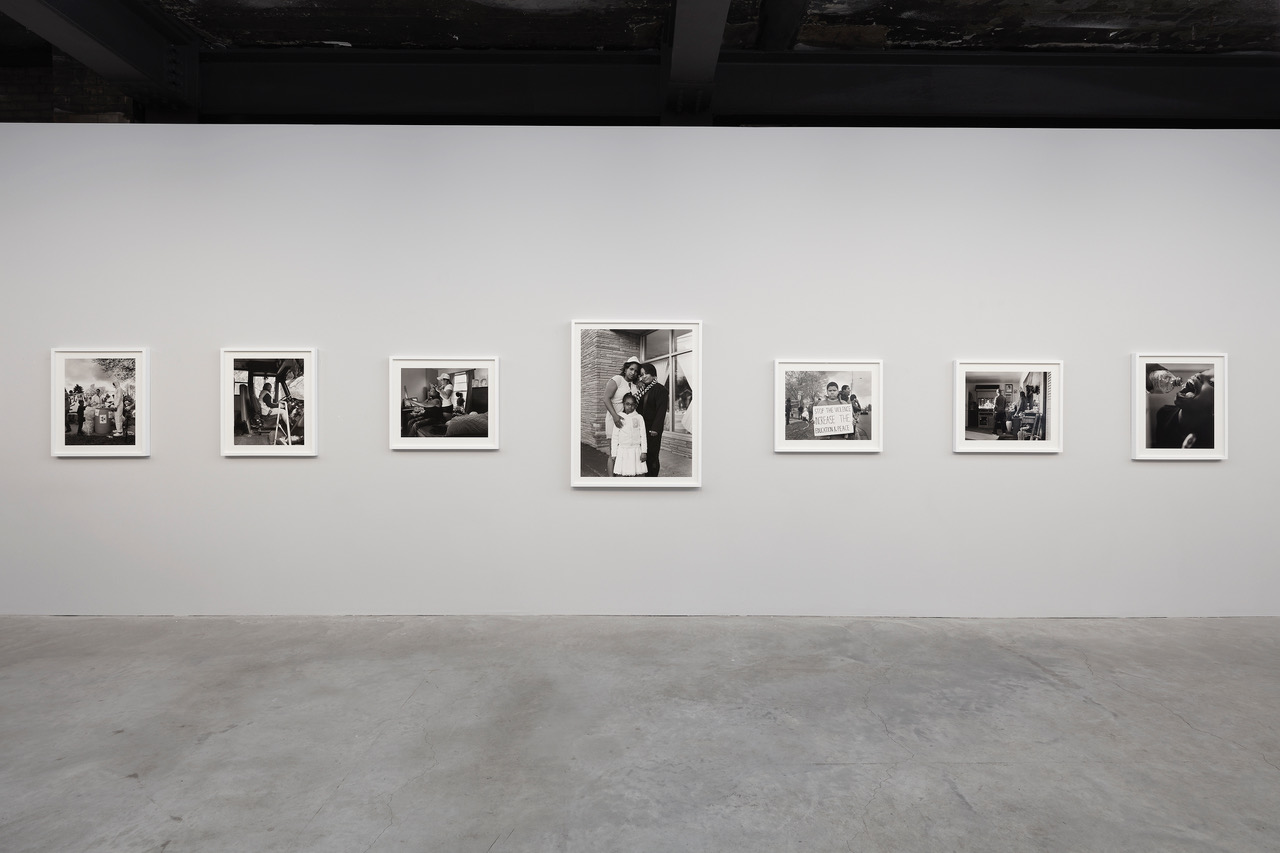 Flint, Michigan, is just one entry in our growing list of national shames, but in some ways it hits the hardest. Our collective failure to reverse the lead contamination of the town’s water supply—a problem caused by puerile greed, stark racism, and corroding pipes—means that for an unconscionable period of time its mostly black residents have not been able to cook, bathe, brush teeth, or do any number of quotidian activities with the sludge that comes out of their taps. It is a sign that we, as a nation, consider it okay for children to suffer irreversible but entirely preventable brain damage, while their parents struggle to pay the highest water bills in the country, sometimes facing foreclosure as a result. Despite efforts of local activists to bring national attention to the travesty, in the three years since the issue came to light, solutions have not kept pace with the urgency of the problem, and many in the community are still without safe water. 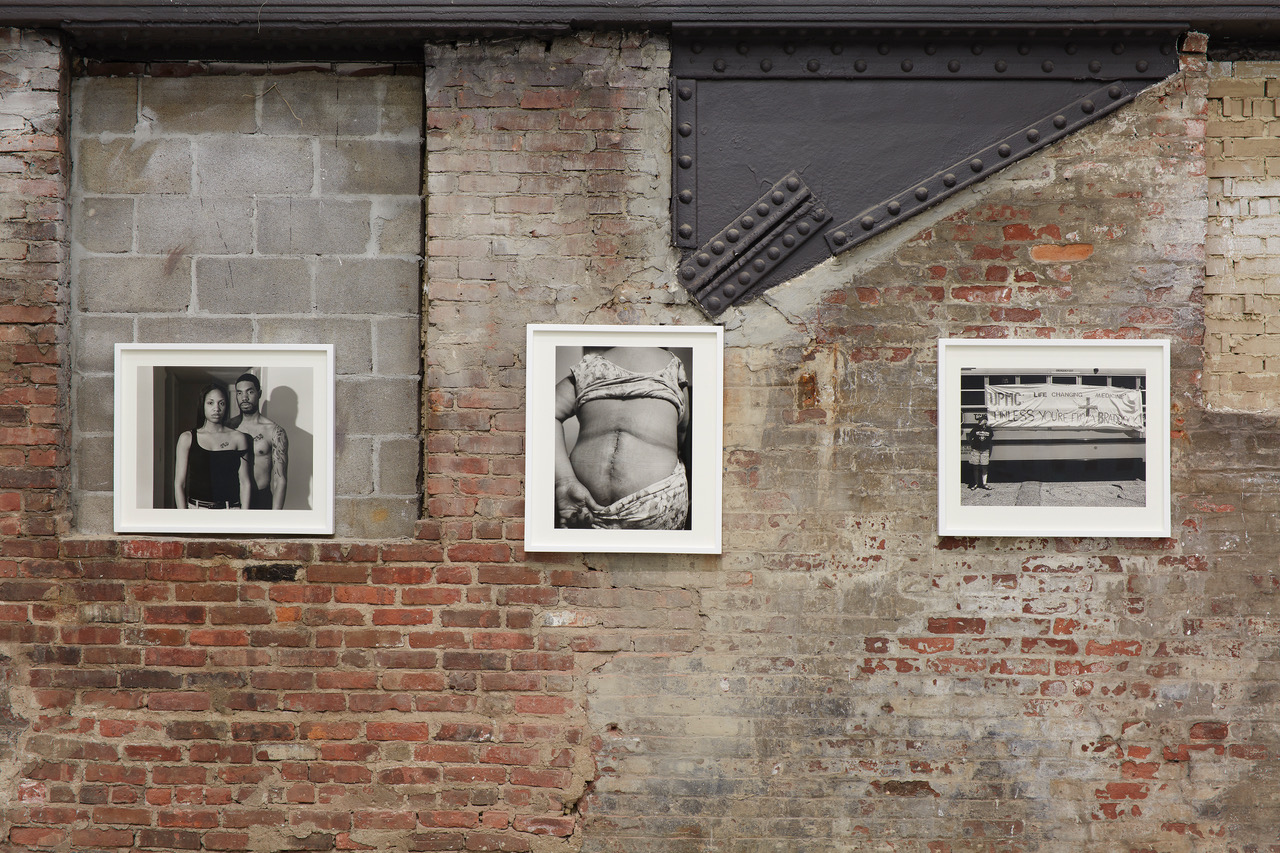 LaToya Ruby Frazier grapples with the fallout of the water crisis in a series of black-and-white photographs titled Flint Is Family (2016)—offering sincere engagement and determined advocacy. The project forms the centerpiece of her current show at Gavin Brown’s enterprise in Harlem, which occupies all three exhibition floors in the gallery and also includes new images in her ongoing series, The Notion of Family (2001–14), and a new suite of photos, A Pilgrimage to Noah Purifoy’s Desert Art Museum (2016). 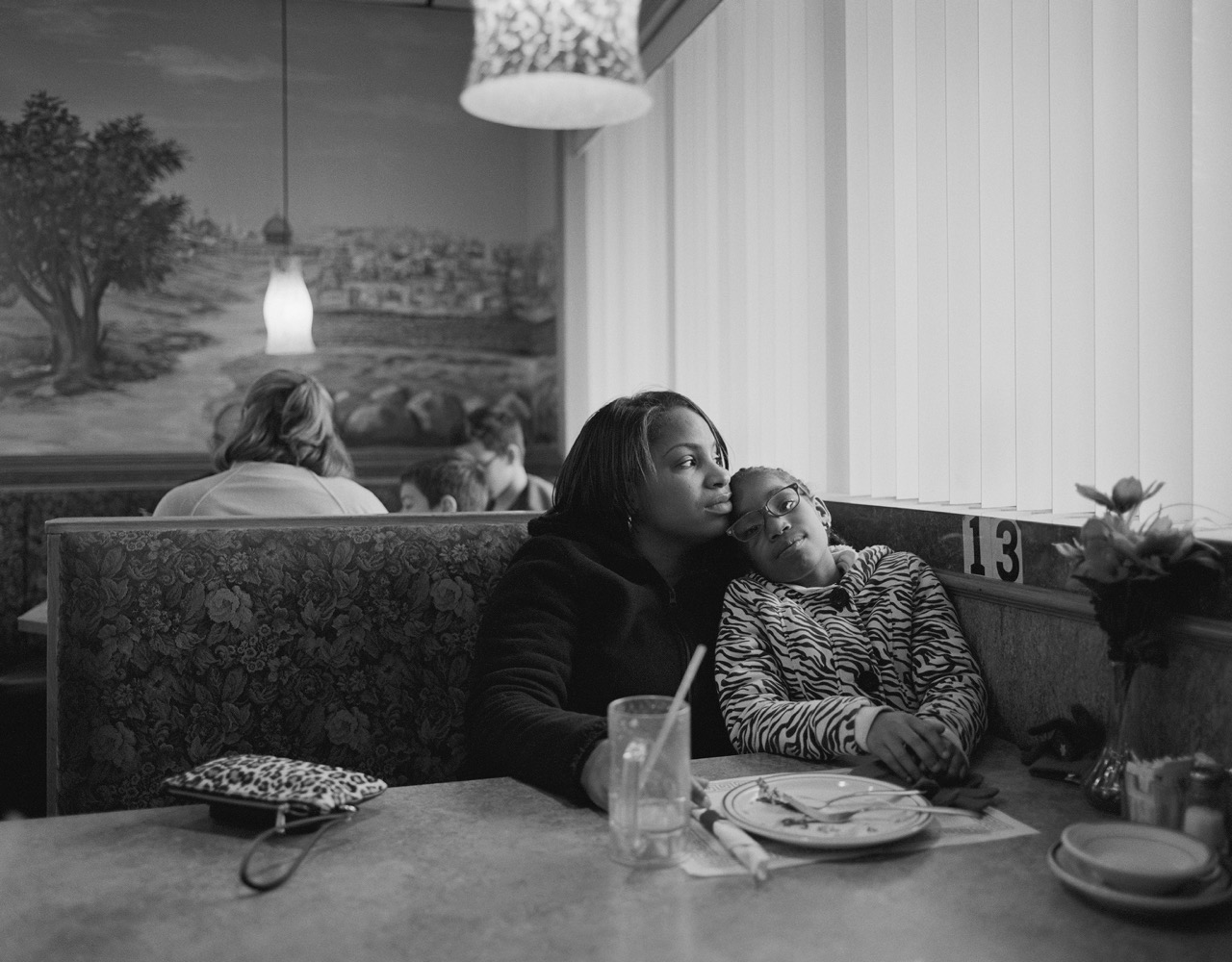 For five months in 2016, Frazier lived in Flint, following the lives of three generations of a single family—Shea Cobb, a poet and singer who has become one of the principal organizers in the water crisis, her young daughter Zion, and her mother Renée. As in The Notion of Family—which traces the lives of friends and relatives in her hometown, Braddock, Pennsylvania, and whose publication in book form in 2014 garnered the artist a MacArthur “genius” award—Frazier trains her sensitive eye on the long-term and sometimes overlooked effects of racism. In her large-format, black-and-white photos of Flint paired with journalistic text, she notes those moments and events—or lost opportunities—that sociological or economic studies would fail to register: the fact that Shea will not be able to teach her daughter Zion to bake, because she can’t stretch her supply of bottled water far enough to be able to prepare food or wash dishes; the fact that Zion will not experience the childhood joys of playing in the spray of a popped fire hydrant or having a water balloon fight; the fact that Shea’s family had to abandon their ancestral home because it was located in an area of town hit hardest by lead contamination. While the last seems most consequential, the effect of Flint Is Family is to show that seemingly minor inconveniences faced by Flint residents have an outsized, cumulative effect, interrupting generational transmission of culture and experience. If Flint is family, what happens when the little, unthinking rituals that tie families together are no longer possible? 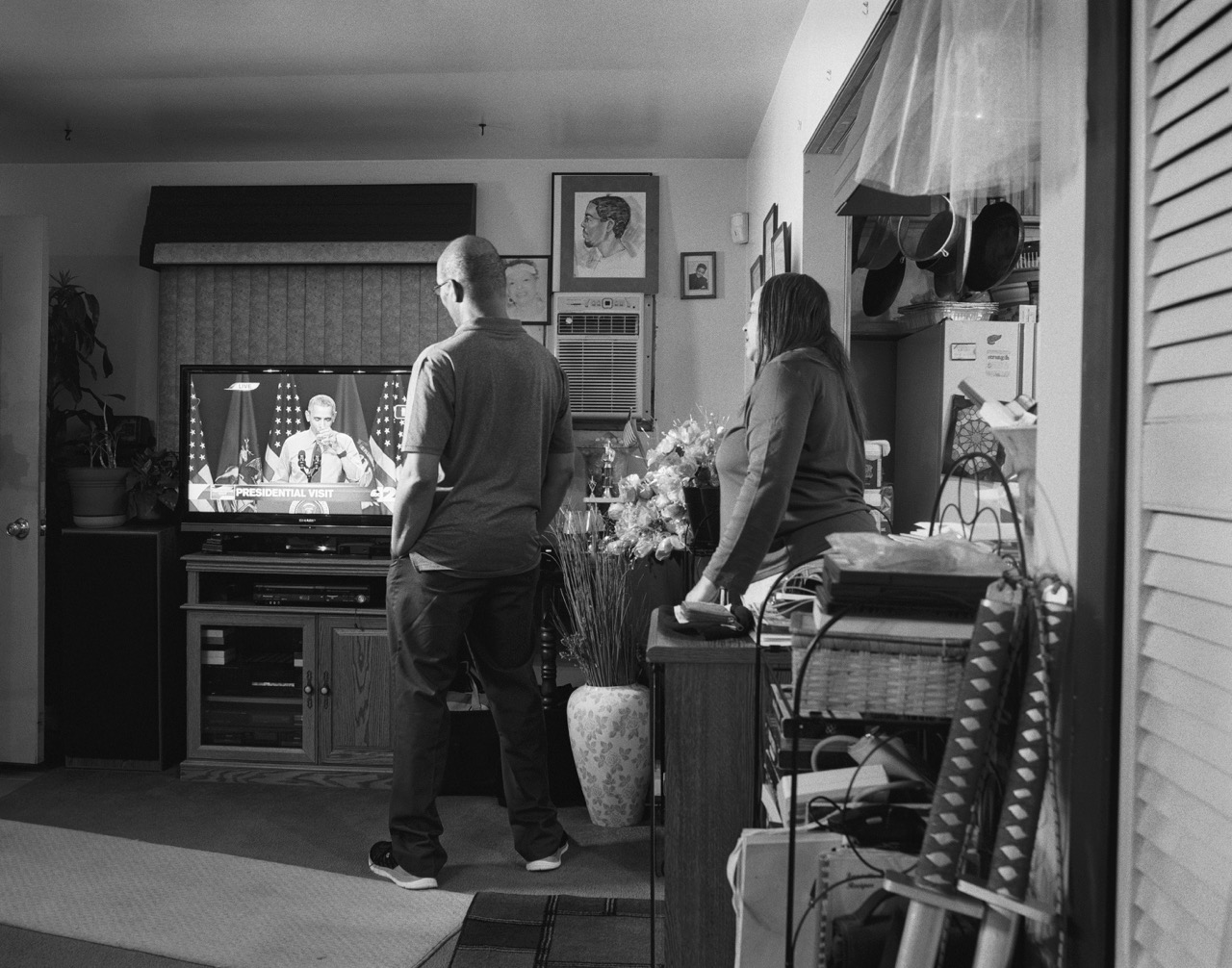 The photographs range from images of public action—protesters lining the streets to urge President Obama to help them—to intimate scenes: Shea cuddling her daughter in a diner booth, Shea braiding her cousins’ hair for a family wedding, Zion opening her mouth wide as her mother pours bottled water into it. An especially moving photograph depicts Shea’s aunt and uncle in their living room, caught in the glow of a television screen, watching, transfixed, as President Obama drinks a glass of filtered water from Flint to reassure locals. But as becomes clear in the images and text, not even the first black president can overcome people’s justified concern that they are still being poisoned. The photos veer from moments of stolen joy and tenderness to those of anger and frustration to those of true despair. The caption of a photograph of the wedding includes Shea’s words of determined resilience: “We’re here, you don’t get to get rid of us at the price of a dollar. We are Flint. We live, we love, we get married and the water crisis does not stop that, it doesn’t stop us from living.” 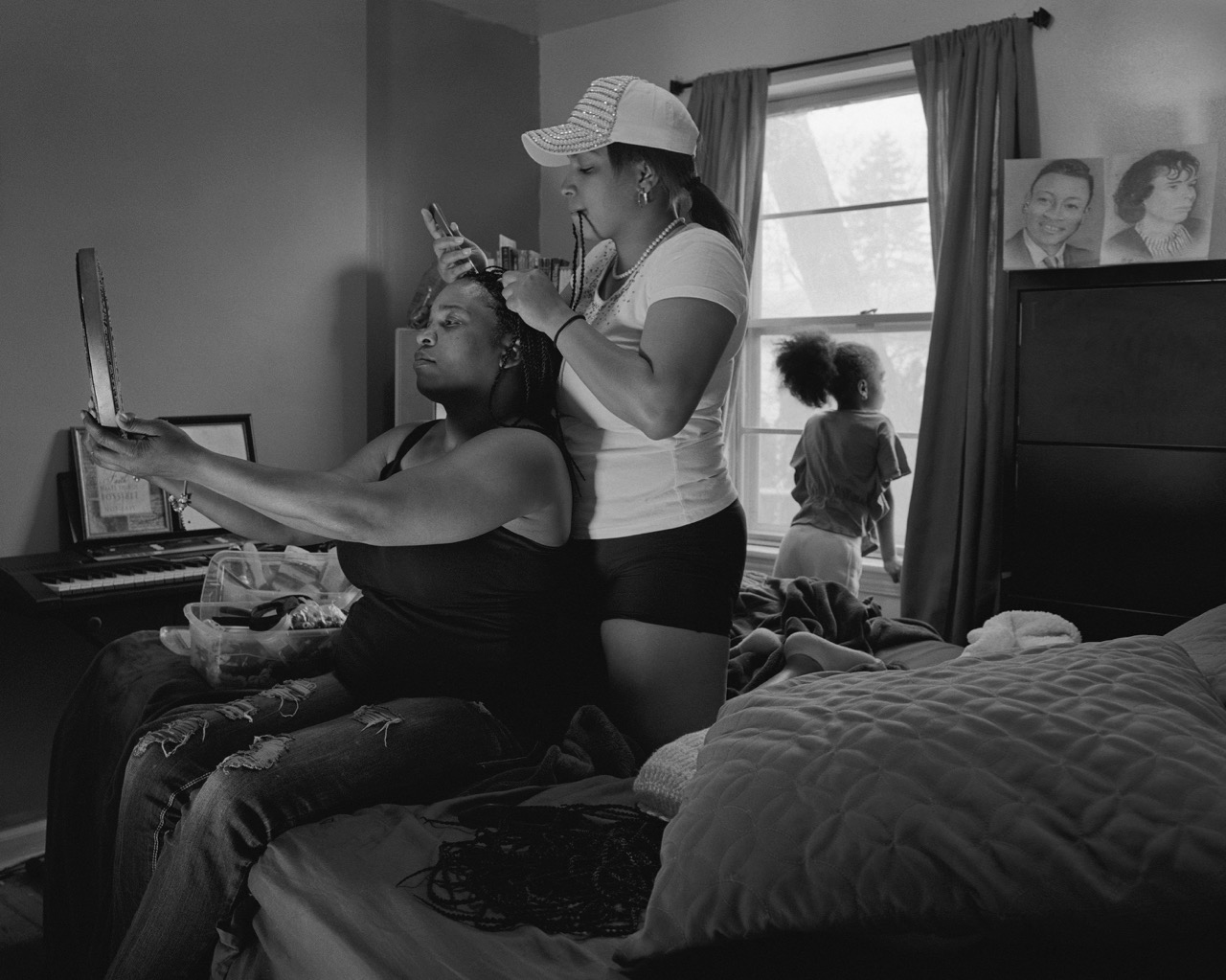 Drawing upon a long history of black documentary photography as a form of witnessing—whose formidable ranks includes Roy DeCarava, Gordon Parks, Ming Smith, fellow MacArthur “genius” Dawoud Bey, and myriad others—Frazier seeks to lay bare the fortitude of black communities in the face of the ravages of inequality. She cites Gordon Parks and Ralph Ellison’s 1948 collaboration, Harlem Is Nowhere, as a touchstone for this project, and indeed Harlem was often the site for these sorts of lens-based engagements. The show is, remarkably, Frazier’s first solo gallery exhibition in New York, and her first solo exhibition at a commercial gallery in the US. It is also planted squarely in Harlem. 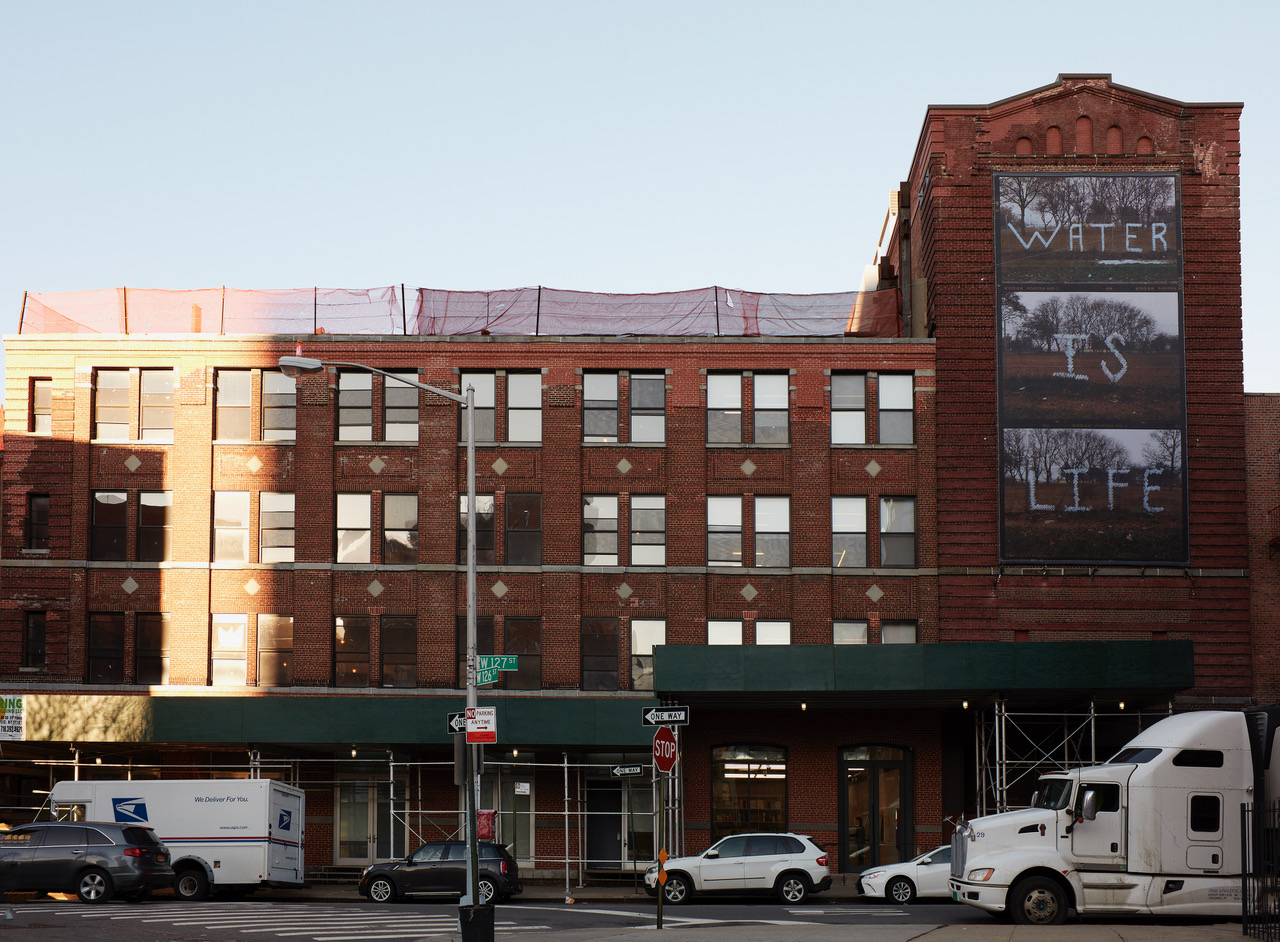 At first glance, the contradictions between Gavin Brown’s hyper-luxe space and the economic desperation portrayed in Flint Is Family chafe. So do the frictions between the gallerist’s largely non-black programming (last year’s Arthur Jafa show was an emphatic exception), the unapologetically black-focused advocacy of Frazier’s approach, and the neighborhood’s rapidly gentrifying character. Who exactly is meant to see the large billboard mounted on the front of the gallery announcing “WATER IS LIFE”? Who is meant to buy the (not-so-cheap) photo editions or (more affordable) printed canvas bags or copies of Cobb’s CDs on sale at the front desk? Who is meant to attend the series of events—zine-making workshops, panels about antiracist pastoral and psychiatric care, a performance by Cobb and Amber Hassan, founders of the Sister Tour, a group that grew out of the crisis? Is it the remaining few from that quickly disappearing Harlem captured by DeCarava, by Parks, by Smith, by Bey, or is it the more prosperous white creative and professional classes who are replacing them, or is it gallery-goers with no ties to the neighborhood at all?

That the show does not address these questions—of audience, of economics, of commerce—is bound to raise eyebrows, as is often the case when activist art enters for-profit settings. But Frazier has never seemed to worry such distinctions. For Parks and other photographers from a black tradition of social documentary, the act of witnessing was necessarily tied to an equally important imperative: drawing the attention of those for whom racism remains invisible. Their photos appeared regularly in Life and other mainstream publications for just that reason. Likewise, Frazier’s Flint photos were first published in Elle, and the Notion of Family series first appeared in mass-circulation, commercial magazines; the artist is as likely to spread her message via TED talks as museum lectures. In this light, the exhibition seems equally designed to inspire black and brown Harlemites to a renewed activism and raise awareness about a criminally overlooked disaster among Gavin Brown’s moneyed collectors and artsy visitors. For Frazier, it would seem, all eyes matter in the struggle for black lives.