Julia Louis-Dreyfus hits the stump in the show’s final season. 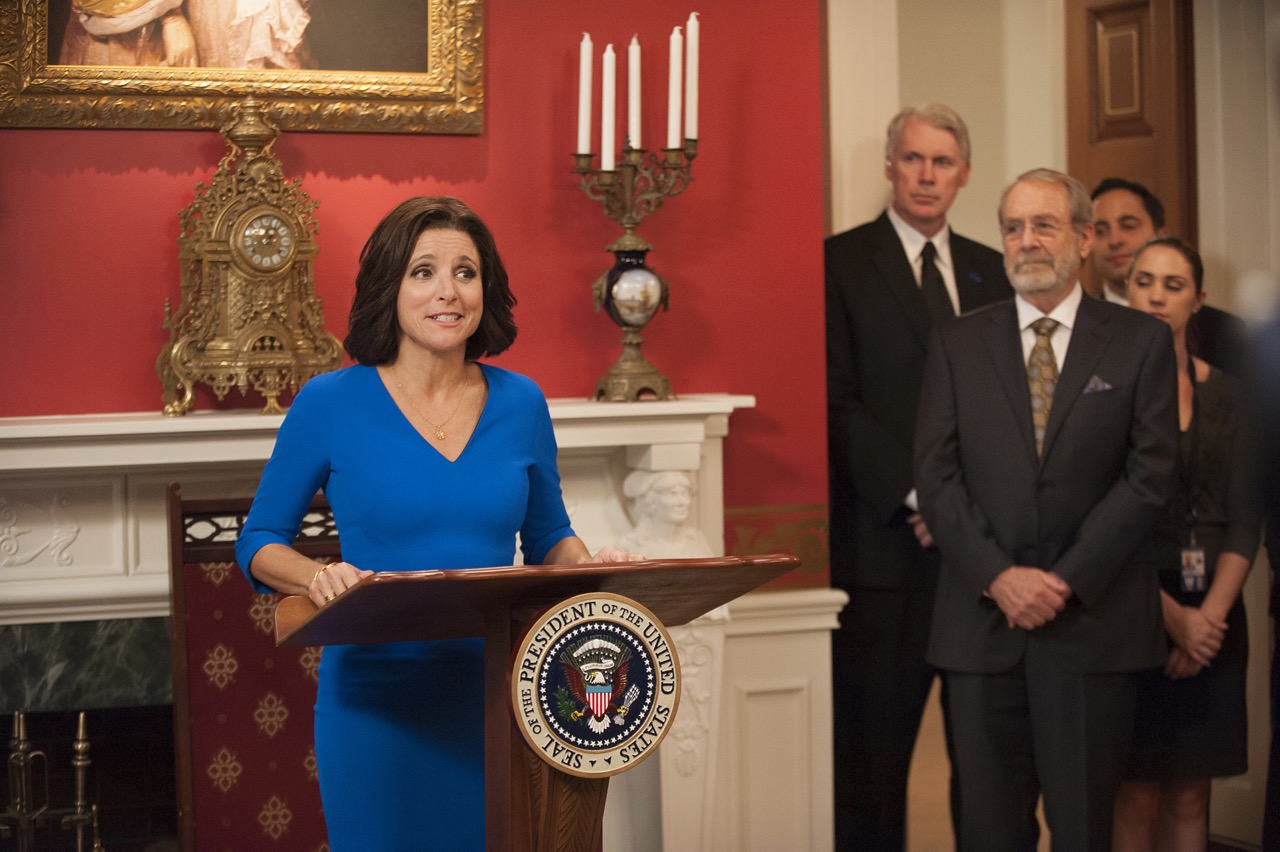 It was supposed to be a story of impotence. Thwarted ambition, ill-fated attempt, bumbled affection: these are the primary motors of the American workplace comedy. Designed to provide half-hour segments of respite for viewers who, wearied by their ever-lengthening days under capital’s thumb, delight in watching others undergo the same indignities, such programs must flatter television audiences with a perfectly calculated mixture of identification and superiority. And so, on the first episode of Veep, the Armando Iannucci–created ensemble comedy that debuted on HBO in 2012, the spoons are melting.

Julia Louis-Dreyfus stars as Selina Meyer, the number-two official who serves not so much “at the pleasure of the President,” never seen, but rather munches on resentment as she stabs at the business—and it is, refreshingly, always shown to be a business—of governing. Her face is drippy with tallow discontent as she champions a “clean jobs” bill in part by pushing the use of renewable cornstarch utensils in federal buildings. When she absentmindedly lifts one from the coffee she has been stirring, it stuns like a mangled car pulled from a lake. She stares at the wilted thing, limp and bent in her hand, with disgust. The metaphor is in no way subtle. 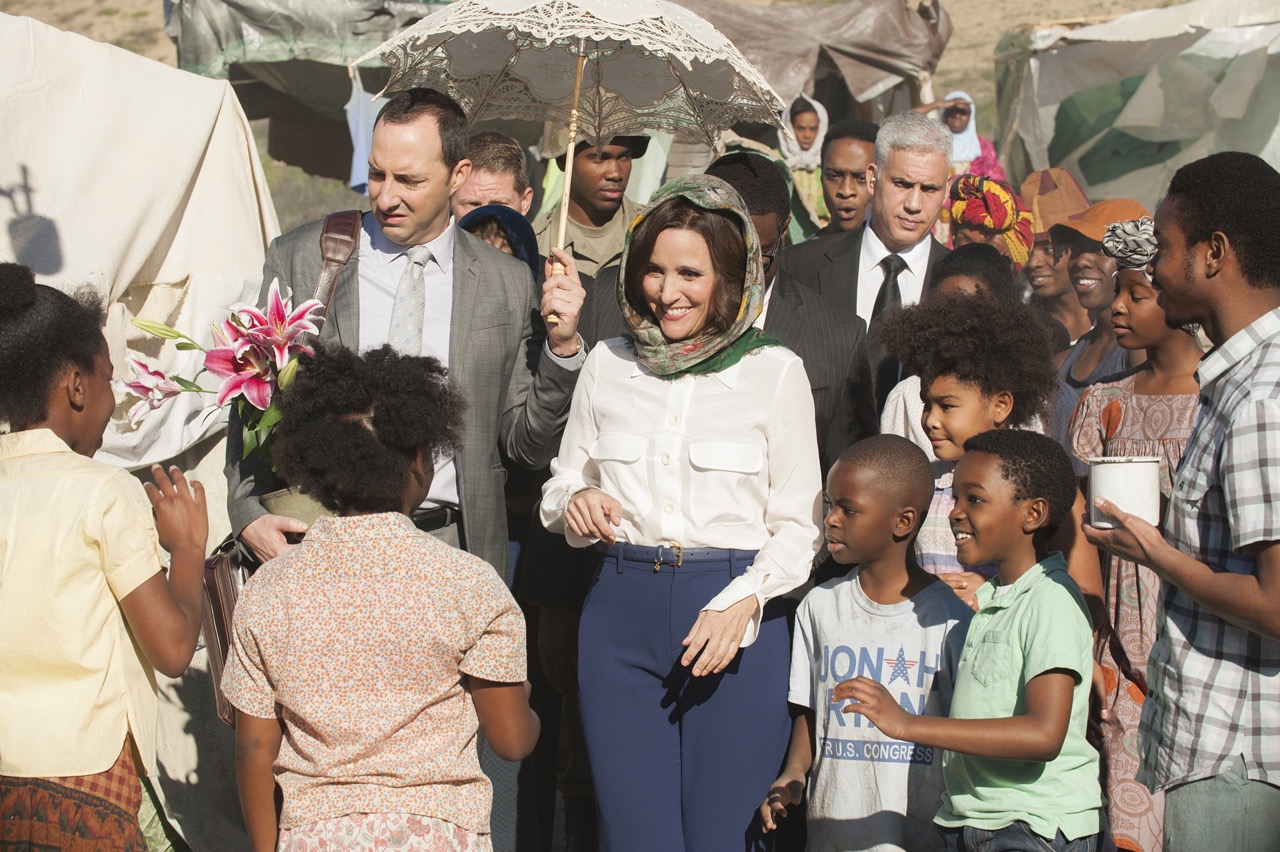 In Selina’s universe, nothing works and it is never her fault. Louis-Dreyfus is superlative in her physical command, careening wildly between Selina’s private grimaces and her public-facing chirps of asinine pleasantries. As she encounters a sea of well-wishers’ outstretched arms, Selina’s eyes will at first glint with the promise of velveteen attention, her favorite drug. Its high is fleeting, and so, confronted with the actual human beings before her, she battens herself against them with a plaster grin and unfocused gaze. She wades through the crowd, shaking random hands, mindlessly sputtering, “I see you . . . I see you . . .” Reader, she does not see them.

If the core of the show—now in its seventh and final season, with David Mandel as showrunner—is the rabid incompetence of Selina and her staff, it also addresses itself to the viewer sated, even cradled, by a sense that their own intelligence (out in the world, always underestimated!) is here recognized. Shot in the voguish single-camera, faux-documentary style, Veep is marked by an absence of pandering exposition. Dialogue races, and an unending fusillade of insults are hurled. There are schoolyard taunts (“sentient enema”); expressions of physiological rage (“I hope your vagina falls off”); and invectives with social commentary tucked uneasily inside (one character moves “as slowly as a Mississippi detective investigating the murder of a young black man”). 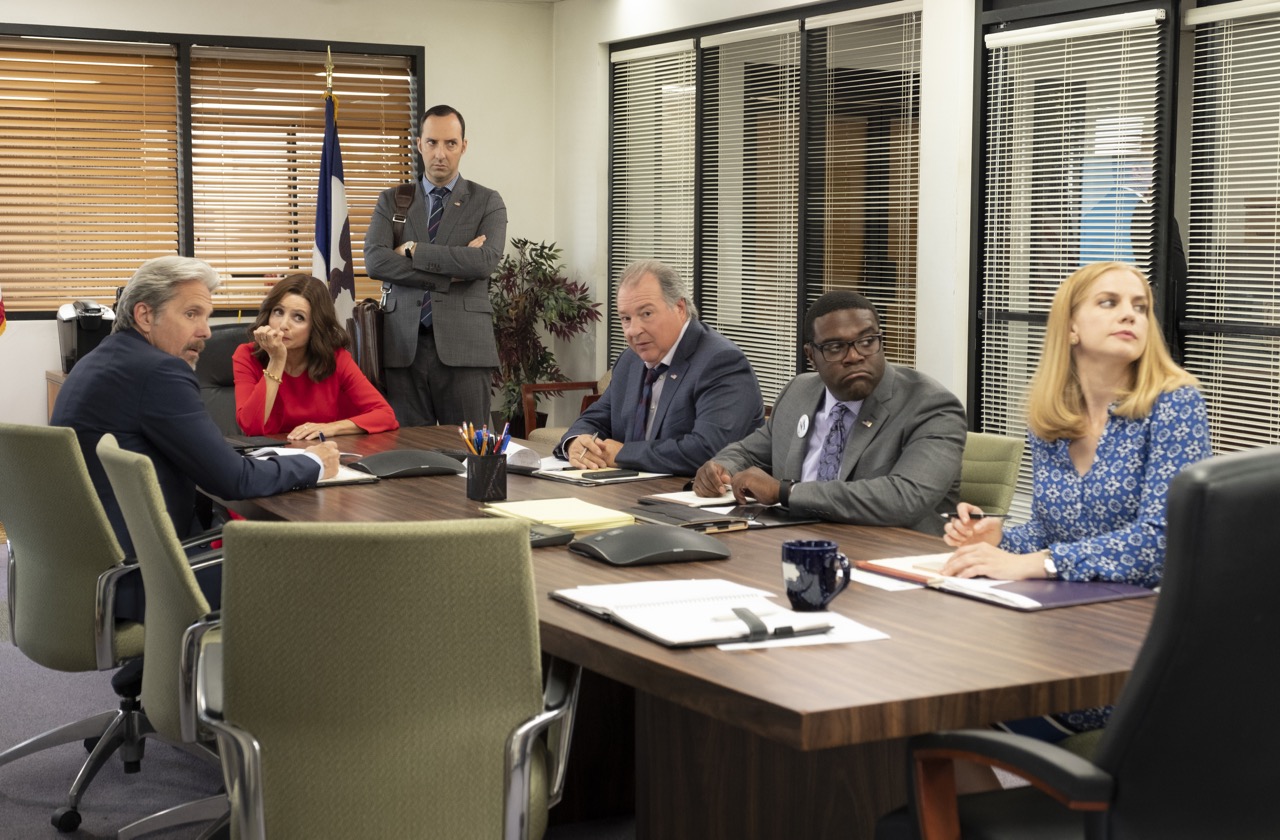 Selina is a wound surrounded by irritants. Amy Brookheimer (Anna Chlumsky), as Selina’s tense second-in-command, often sutures her shoulders to her ears in a posture of shrill distress and finger wagging. There is also the shuffling ineptitude of press secretary Mike McClintock (Matt Walsh), the slimy maneuvers of Dan Egan (Reid Scott), the milky dirges of daughter Catherine (Sarah Sutherland), and the ambling, grinning jeers of Jonah Ryan (Timothy Simons). A bevy of comedic “straight men” round out the crew, their jaded sighs a proxy for the audience’s own knowingness: the exhausted Ben Cafferty (Kevin Dunn), who chugs booze from an oversize coffee mug, the statistics whiz Kent Davison (Gary Cole), and, most deliciously, the hyper-competent, never-fazed Sue (Sufe Bradshaw), in charge of Selina’s schedule (at least until season 5). 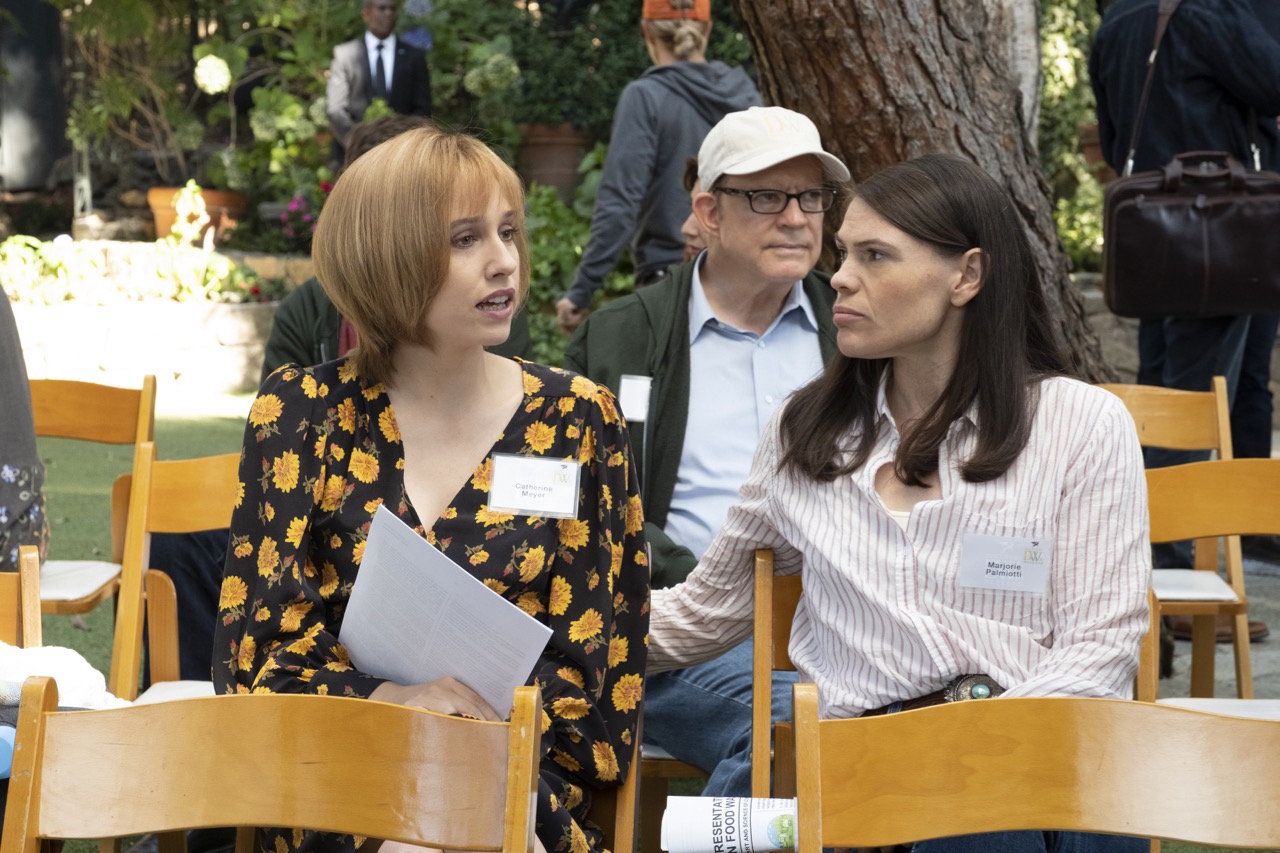 Veep looks askance at the construction, pervasive in sitcoms as in actual offices, of coworkers as a family, an odious rhetoric that hails us into loving our own exploitation. Bad attachments persist. Nowhere is this more evident than in Selina’s relationship with Gary (Tony Hale), her bag man. Gary anticipates and fulfills her needs—offering tea, tissues, lipstick, flattery, an object for beratement—at just the right moment. Hale’s exacting combination of lope and hover are precisely tuned to Louis-Dreyfus’s compact tempest. He’s a storm chaser; Selina’s a Category 5. 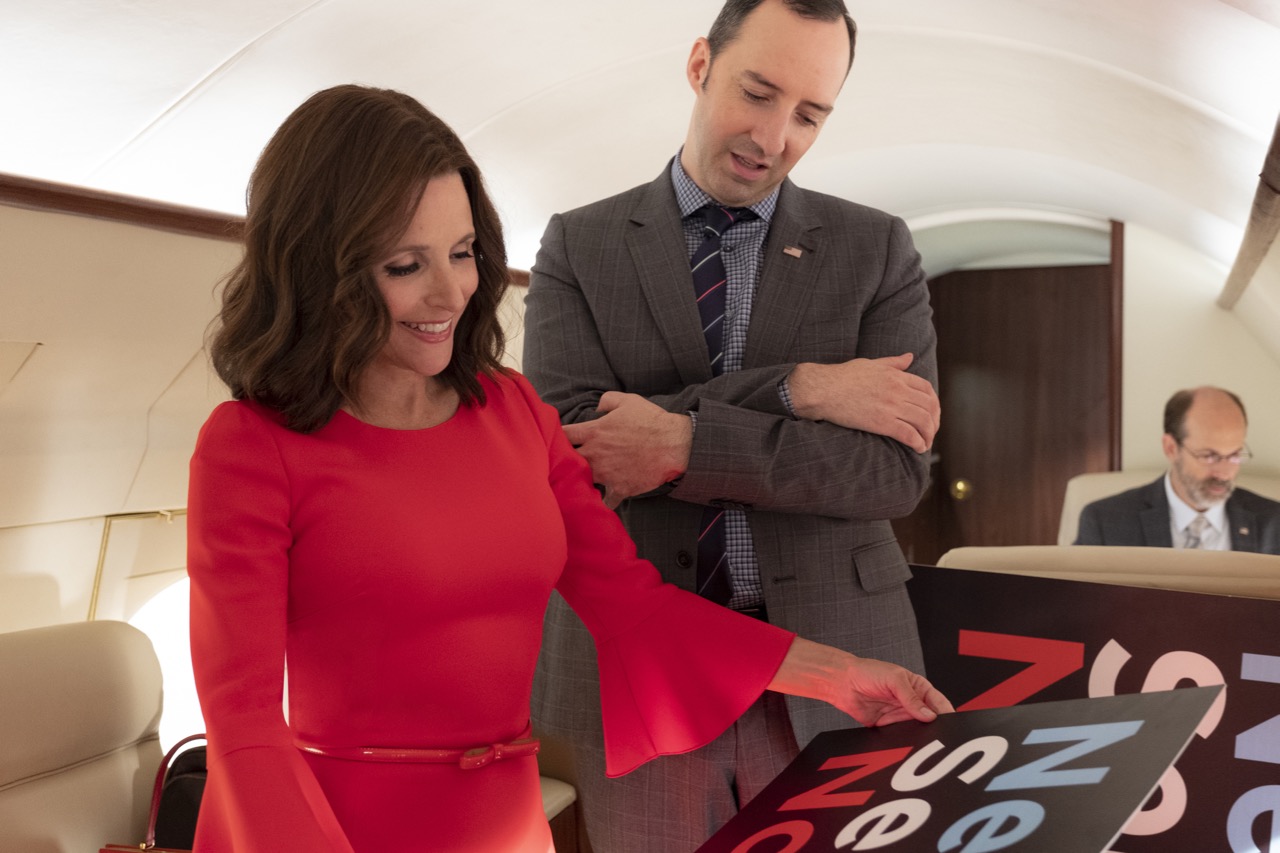 It’s tempting to cast Veep’s brand of outlandish, scripted satire as somehow truer than the absurd plot points of our present moment. Yet, like all television shows, Veep is emphatically fantasy, and the fantasy is this: our country is run by egotistical maniacs and their simpering peons (who could, theoretically, be replaced by better, kinder people). The fantasy is that cruelty happens on the level of individual insult—sharply, entertainingly vituperative—rather than through the dull erosion of structural force.

Power corrupts, but it does not necessarily inure, and the show is acute in its rendering of sexism’s bald constancy, even at the top. Selina’s position does nothing to protect her left breast from an unceremonious groping by the prime minister of Finland’s oily husband in season 3. After this shock, Selina’s bravado crumbles, then curdles. She likewise spirals in an episode from season 5, as she tries to identify which of her staffers called her a cunt (spoiler: they all did), a storyline that allows her, slouching in reflection on the affront, to articulate that “fundamentally, people hate women.”

She’s not wrong. But it’s marked that the character traits demonstrating her immorality—her venality and vanity, matched only by her specific, unrepentant horniness (her physical desires for men are often the crux of her narrative downfall)—are from misogyny’s oldest arsenal. This contradiction is itself surpassed by, more chillingly, the show’s illustration of white corporate feminism: as coiffed as it is repugnant. Selina’s relentlessly toned arms, brandished like armor, are metonymic for the patriarchal value of hardness to which she subscribes. After all, Selina hates women, too; in the current season, she triumphantly ends a debate with the exhortation to “Man up!” Her undeniable experiences of harassment and underestimation have led her not to a dream of justice, but of usurpation. 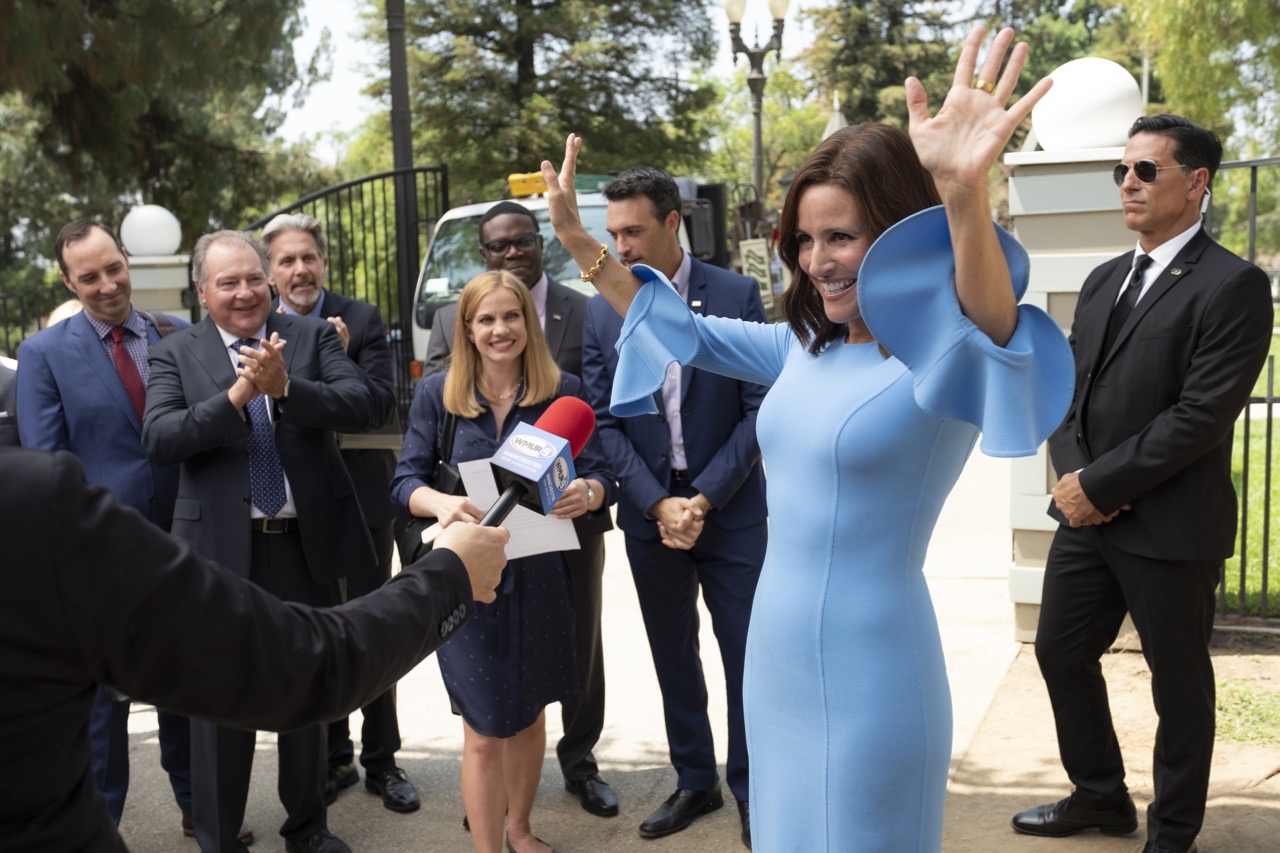 So, she’s running—again. As the series draws to a close, Selina is caucusing in the Midwest, trying to raise money, trying, and flailing, to articulate precisely why she wants to be president. The acceleration behind the show’s narrative engine—that it’s increasingly deranged for Selina to desire the presidency—conceals the fact that her candidacy is pathological not because it’s futile, nor because she is driven by petty grievances, or is a bundle of incoherent want—I am, who isn’t—but because the state is itself an arrangement of profound iniquity. As in much of the best comedy, Veep operates by sly substitution. It promised a dick joke, a punchline about ineffectuality, a woman outside the party, uninvited. Instead, it gave the story of power’s incapacity to see itself.

Television series end, sometimes too soon. So do empires, but never soon enough.