The Met hosts a semi-spectral collection of
nineteenth-century daguerreotypes. 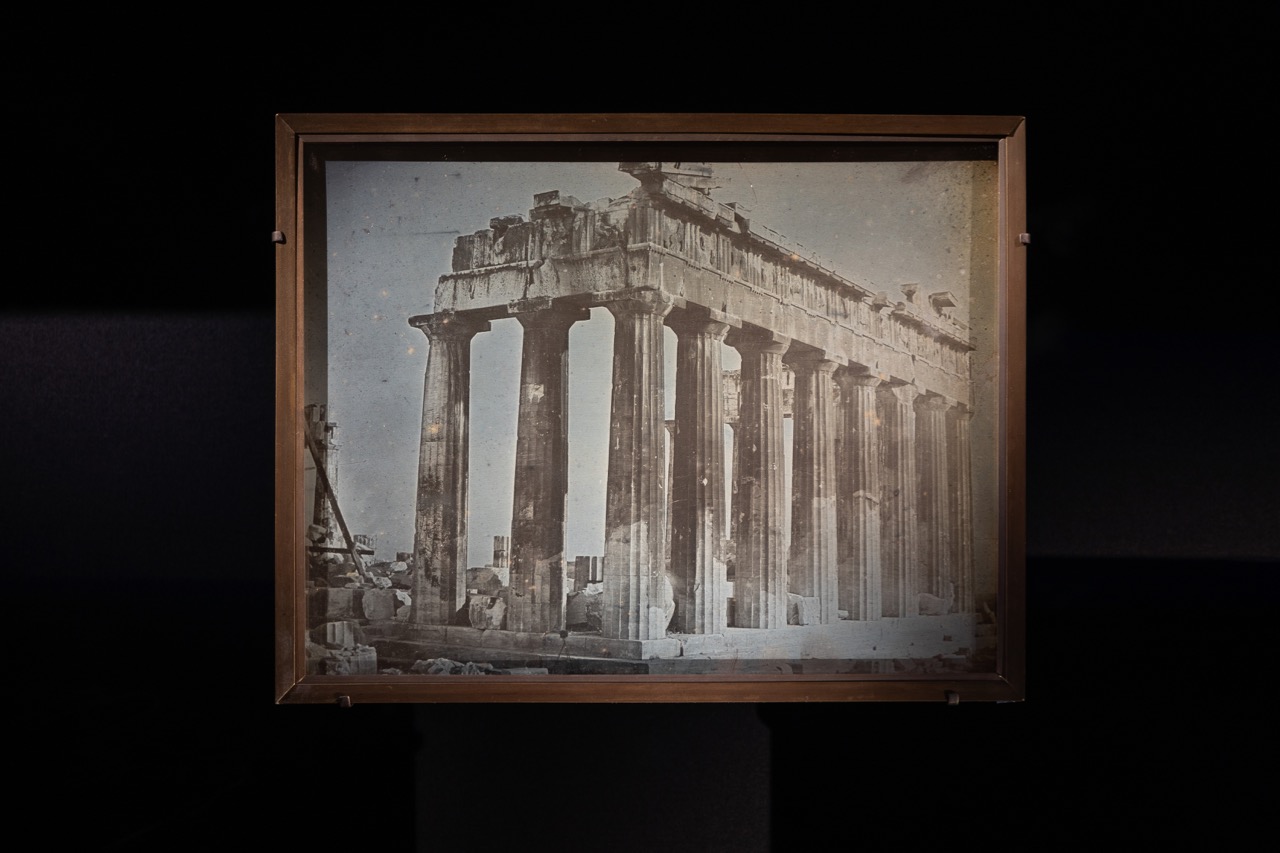 Wander through the Metropolitan Museum of Art and you will encounter, as in any repository of antiquities, a vast collection of displaced fragments. The bottom half of a Greek stele, thousands of miles from its original home, no longer guarding the burial site of its nameless soldier. Chunks of a broken Roman statue, reassembled to form the torso of a forgotten aristocrat. A scrap of soiled Parthian silk, its original function lost. Though the museum’s scholarly wall labels attempt to provide some context for these bits of priceless detritus, a great deal of their power rests not in what they reveal from the past, but in what they leave unknown. It is in this vacuum that we come to focus on the material nature of such fragments, contemplating what can be learned from the particular angle of a millennia-old hand-stitch, or imagining the provenance of the scuffs and cracks borne by the surface of white marble. 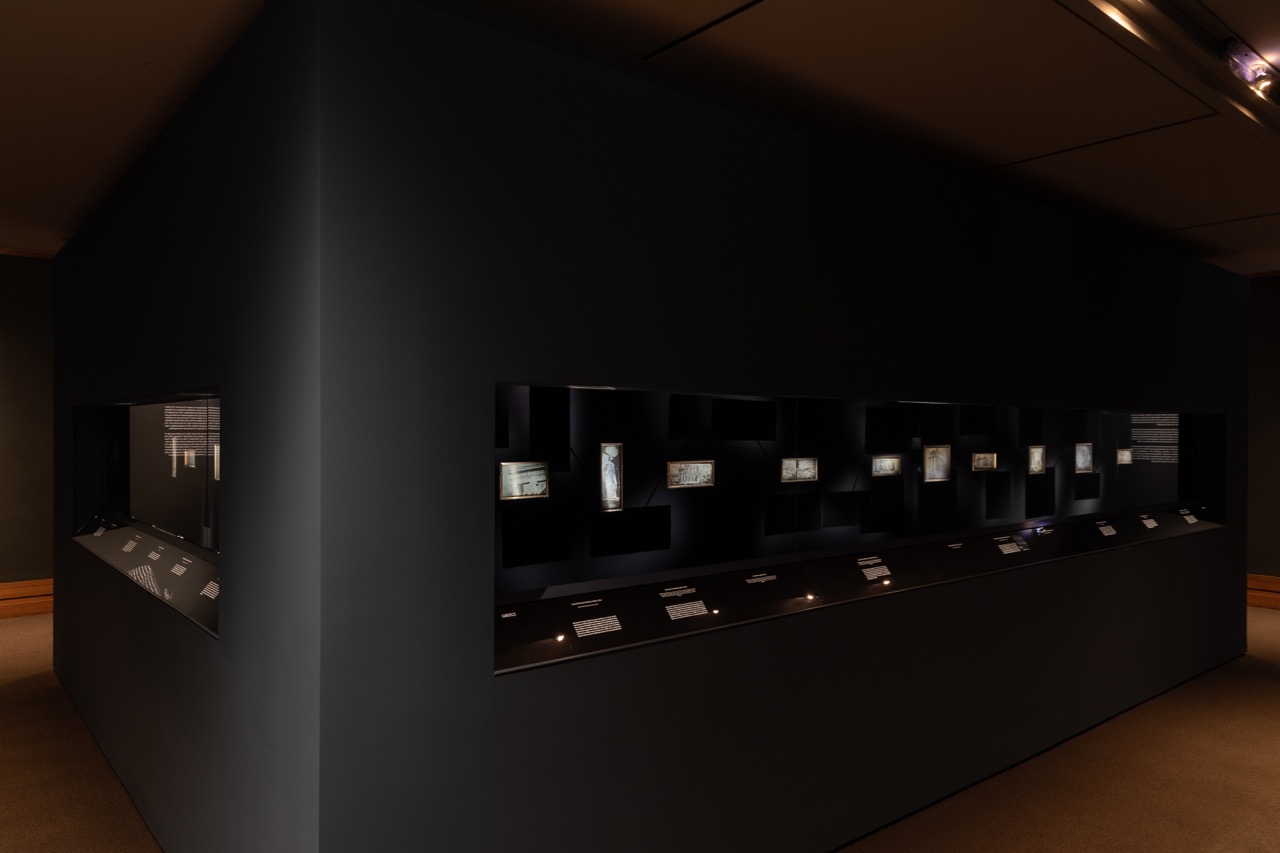 Now enter the Met’s special exhibition galleries, and you will encounter something approaching a mise en abyme in the form of its current exhibition, Monumental Journey: The Daguerreotypes of Girault de Prangey. Here, where photographic prints usually hang on the galleries’ walls, each room of this mini-labyrinth instead holds a large glass-windowed cubical case at it center, not dissimilar to the cabinets containing the likes of battered denarii and medieval reliquaries elsewhere in the institution. These cases display upright rows of daguerreotypes, taken in the 1840s by Joseph-Philibert Girault de Prangey—Frenchman of noble lineage—on a grand tour of the Mediterranean and Middle East, depicting the colossal but depopulated architectures of Rome and Athens, Cairo and Damascus. 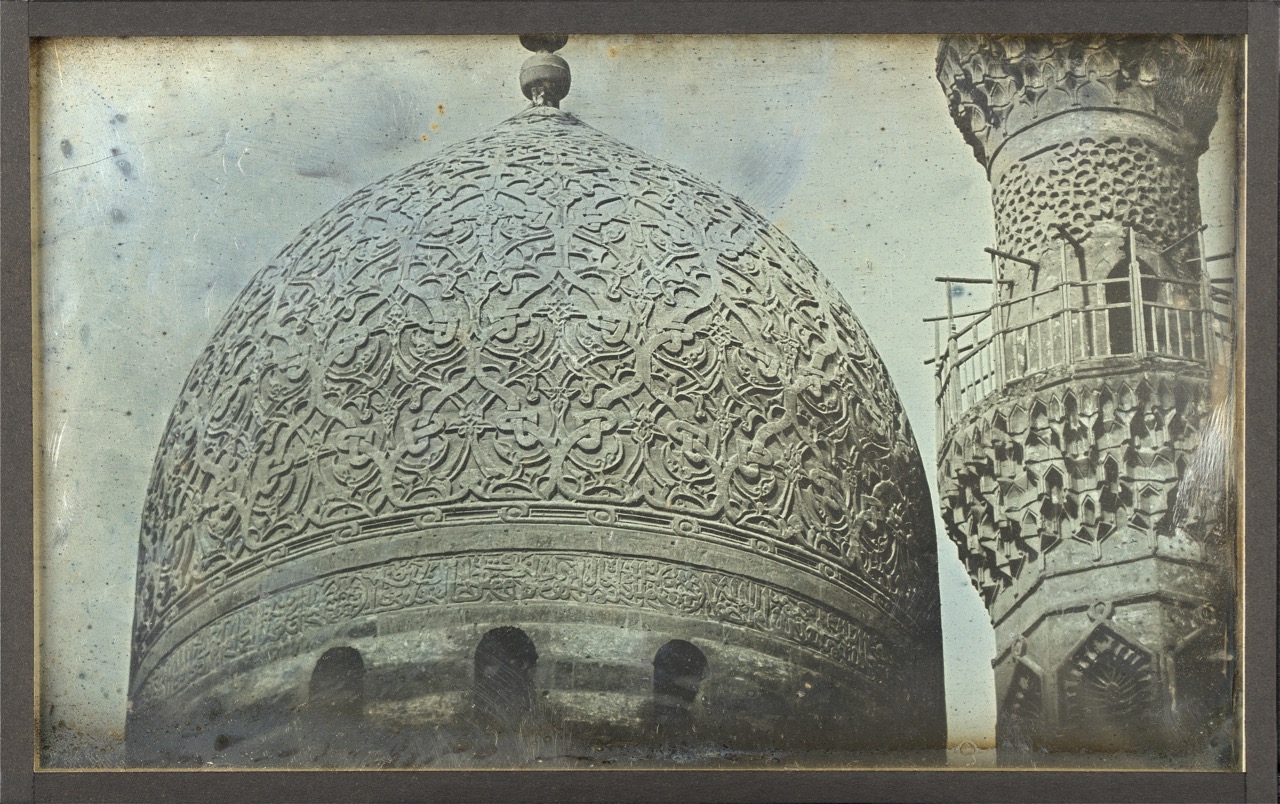 Much of what we see, illuminated within the cases by soft arcs of artificial light, are images of landscapes covered in crumbling ruins, captured with spiderweb-thin delicacy upon reflective metal rectangles. Even in places where the centuries had not yet destroyed the integrity of these ancient structures, de Prangey himself has often broken them into fragments by focusing his lens on some particular architectural detail, thereby isolating, for instance, the space above an archway at the Mosque of ‘Amr ibn al-‘As in Cairo to center a marginal corner of stonecut Arabic inscription, or framing the circular roof of the Temple of Vesta in Rome to accentuate its slightly undulating curve held aloft by Corinthian columns. The exhibition’s total effect is that of a miniature museum-within-a-museum, a semi-spectral collection that includes shots of many sites that have long since been lost to warfare, industrial development, climate change, and other indignities of our accelerating history.

Remembered today as one of the first photographers to explore the aesthetic potentials of the medium, de Prangey became drawn to the new art of daguerreotypy not long after its invention in 1839—when the revolutionary but expensive and complicated process had soon become something of a genteel hobby. As the exhibition’s fascinating catalog details, de Prangey’s investment in photography followed from his longstanding interest in antiquarian documentation: a proto-archaeological field of inquiry known at the time as histoire monumentale, or “monumental history.” His passion for studying the grandeur of the past was not atypical for the Gallic aristocracy of the era, who themselves had become largely obsolete in the era of King Louis Philippe I, the so-called roi bourgeois. 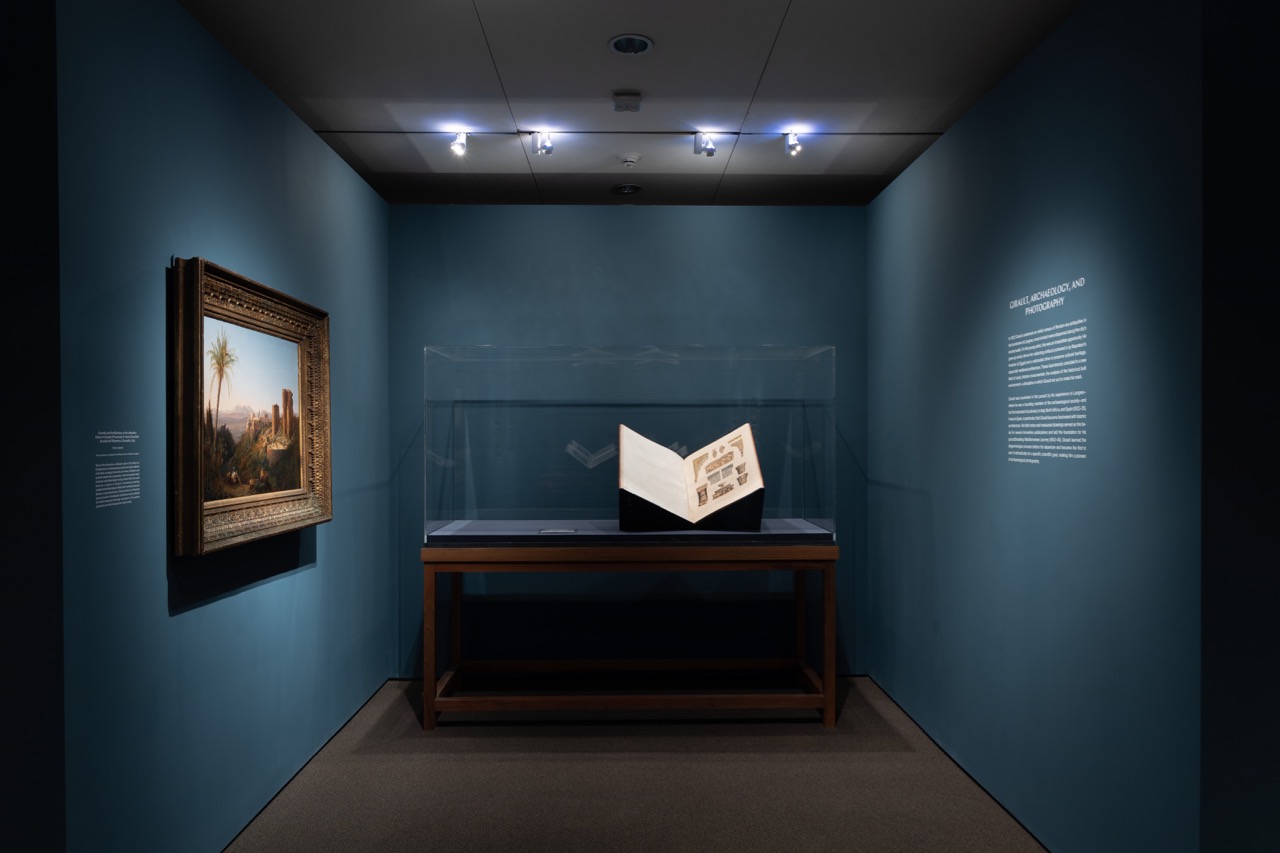 Prior to his photographic tour of 1842–45, which brought him from Paris through Italy, Greece, Egypt, Syria, Turkey, and Lebanon and resulted in over a thousand individual daguerreotypes, de Prangey conducted a journey in the early 1830s, recording what he found in France, Italy, Spain, and Switzerland through watercolors and line drawings, likely executed using a camera lucida. Despite the technical prowess and beauty of de Prangey’s daguerreotypes, there’s no evidence that he ever exhibited them to the public. Indeed, he may have seen them primarily as a means to an end, using their precise details as a guide to hand-drawn illustrations for lithographic reproduction, some of which were included in his 1846 publication Monuments arabes d’Egypte, de Syrie, et d’Asie mineure, leaves from which appear in the Met’s exhibition.

As we browse the more than 120 daguerreotypes on view, it’s inevitable that they might prompt contemplation of our own century, in which picture-taking has become a near-universal pursuit. Yet to understand these selections from de Prangey’s colonial-era hoard mainly as precursors to our own hyper-mediatized culture would be an act of simplistic historical narcissism, like gazing into their mirrored surfaces and only paying attention to one’s own reflection. For what is most compelling about these images is how alien they are to contemporary photography. We experience photography today as the creation of an image-as-information, inherently weightless, fungible, and mobile. In contrast, daguerreotypy involved the making of not only an image, but an artifact, something closer to a plaster cast than a digital picture. As its name implies, it’s more akin to a -type, an impression or stamp, than a -graph, the result of writing or drawing. 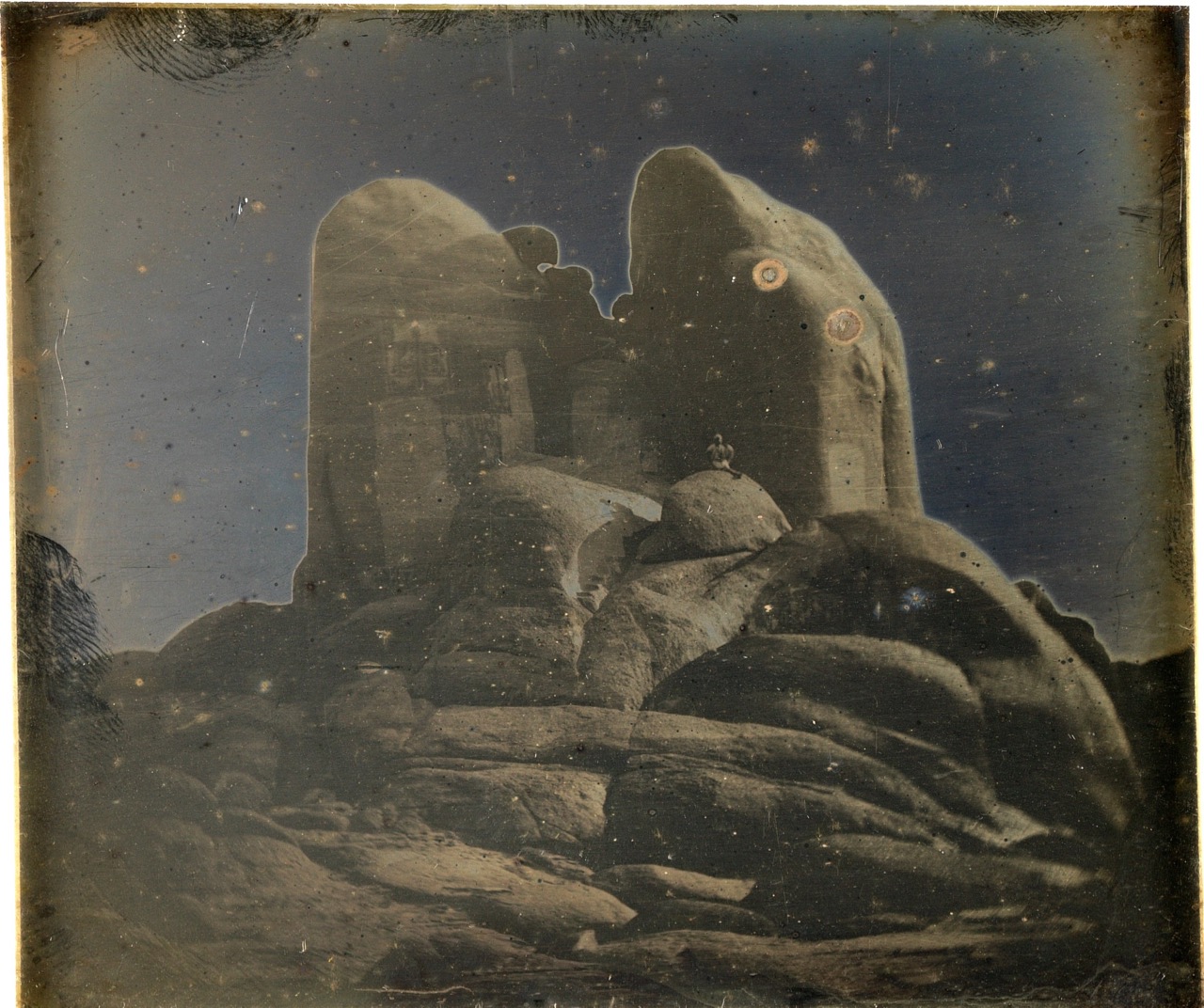 Imprinted directly upon a silvered plate, and thus produced without a negative from which prints could be made, every daguerreotype is unique and, in its own time, unreproducible by any mass-scale process. De Prangey’s are even more unusual in that he worked with a massive custom-built camera that could hold plates significantly larger, at over nine by seven inches, than commercially available ones; he also used multiple exposures on a single plate to create daguerreotypes of dimensions found nowhere else, like skinny vertical studies of columns, or horizontal panoramas of disintegrated cityscapes. Even today, their coruscating surfaces resist versioning, since modern photographs and scans of daguerreotypes cannot convey the way their images shimmer as one’s view shifts, or how this optical play creates a phantom depth that is nearly holographic. Consider as well that while images of de Prangey’s daguerreotypes circulate freely online, his old square of chemicalized metal called Athènes, Temple de Jupiter Olympien (1842, not included in the show) broke the record for most expensive photograph when it sold at auction in 2003.

Elsewhere in the Met can be found any number of Roman copies of Greek statuary whose originals have been lost. In this exhibition, de Prangey’s daguerreotypes play a similarly dual role. They are reproductions whose value lies not only in preserving architectures that have vanished, but as physical evidence of photography’s own ancient history.