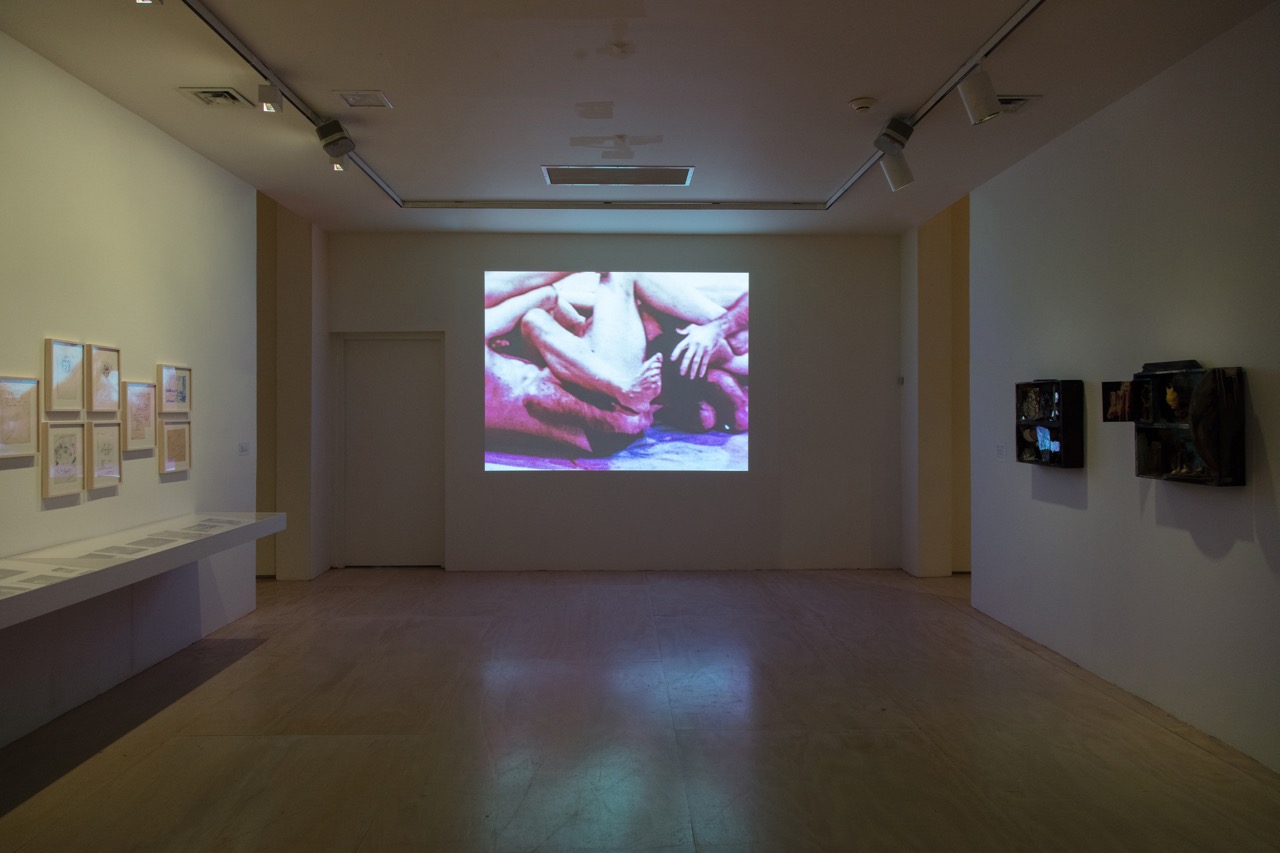 Carolee Schneemann: Kinetic Painting is the first retrospective of the legendary American artist’s six-decade career. Curator Sabine Breitwieser organized the exhibition for the Museum der Moderne Salzburg where, a friend reports, Schneemann’s work fared better than at PS1; the repurposed schoolhouse does her oeuvre few favors. At the press preview, a curator pithily condensed the show’s layout: “Sex and death on One; chronological survey of earlier work on Two.” This is accurate, as far as it goes, but fails to convey the visual congestion and awkwardness of the upstairs-to-downstairs layout, with additional videos and video installations consigned to small classrooms.

Schneemann identifies as “a painter—a media artist,” in that order. Perhaps handling the granular and greasy materiality of paint throughout her early career presaged the intense physicality of her pioneering deployment of the female body in performance and body art since the 1960s. That practice has served as an enduring model for subsequent generations of artists, feminists chief among them. 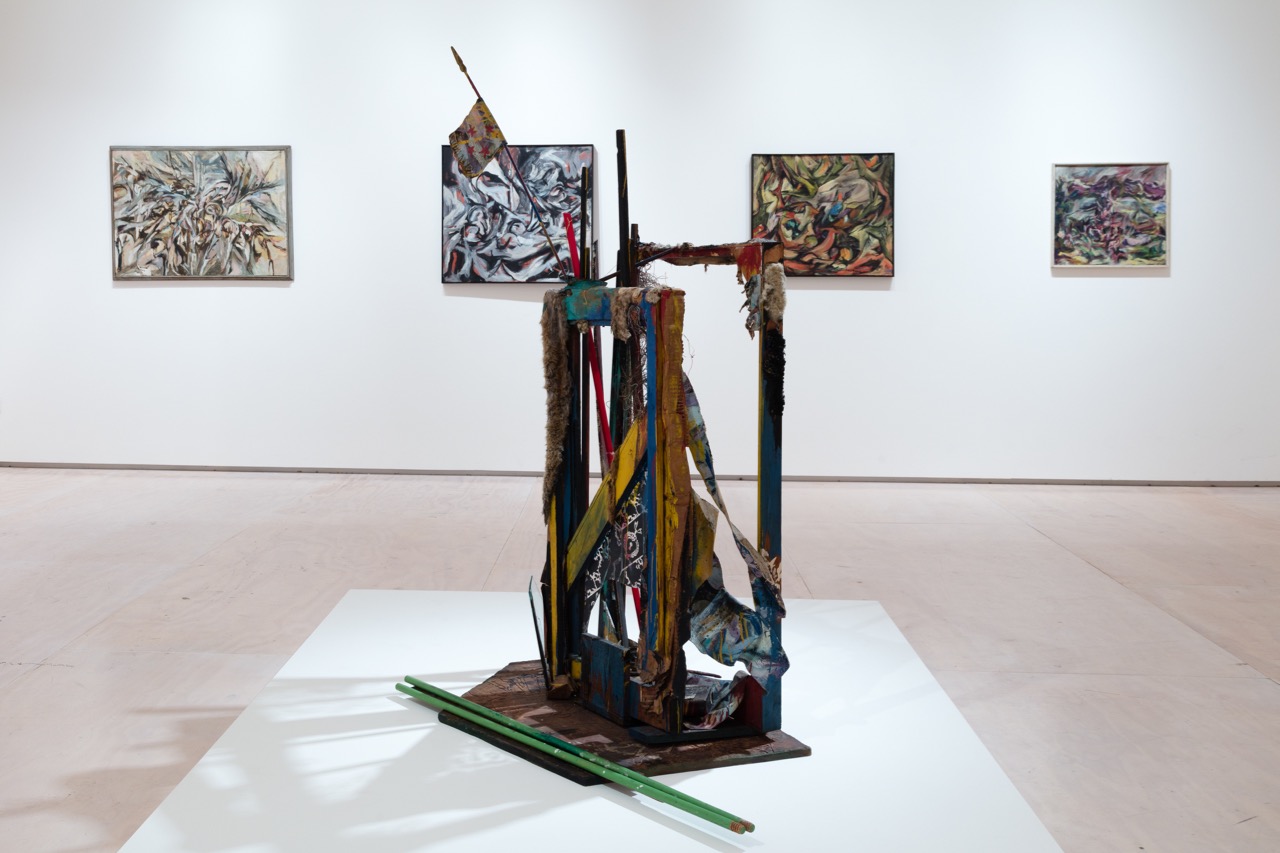 A pair of adjoining galleries on the second floor brim with mid-to-late-1950s paintings and “painting constructions”—pictures embellished with commonplace objects, printed matter, and/or kinetic (motorized) elements. As much as any other artist of her moment, Schneemann realized the implications of critic Harold Rosenberg’s 1952 assertion that painters like Jackson Pollock and Willem de Kooning had transformed the canvas from a surface on which to inscribe images into “an arena in which to act.” But don’t expect second-generation abstract expressionism. Though unmistakably expressionistic, most of her paintings are semi-abstract landscape- and figure-based works. In addition, Schneemann chose not to replace the domestic scale of easel painting for ab-ex monumentality—an emphasis on the intimate and handmade that attests to her engagement with lived experience in all its resonant detail. 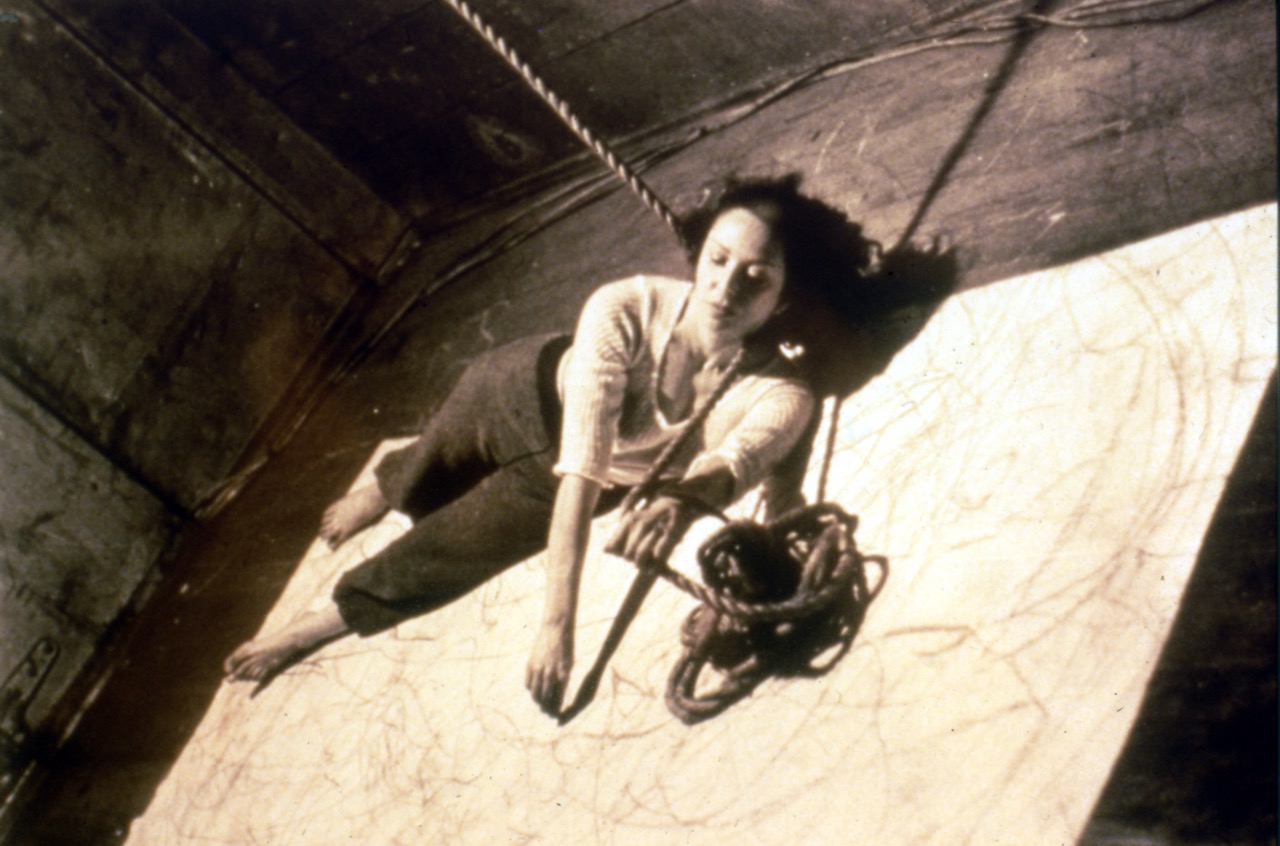 An opening in the wall that separates the first from the final second-floor gallery offers the show’s most rewarding sightline: to the tree surgeon’s canvas-and-leather harness, hanging from the ceiling by a rope, that is the centerpiece of Schneemann’s most powerful painting-related work. Up to and Including Her Limits (1973–76) is a dynamic installation that integrates performance, drawing, and sculpture. Bracketing Up to’s redolent rigging, two expanses of paper meet to form a corner and connect with a floor-bound third. All are lightly scored with looping, multicolored lines—rhythmic “trackings” the artist made by wielding blue, red, orange, or yellow crayons in her right hand as she hoisted and lowered herself, swung back and forth, or dragged her often naked body across the floor with her left (as one sees in three video monitors flanking the tableau). Far more than a drawing—or even the index of a performance—these colored swirls attest to actions taken by a gutsy woman in her mid-30s who defied American sexism, misogyny, and sex-negativity to use her body in ways that revisit and recode the macho associations of Pollock’s famous “drip paintings.” 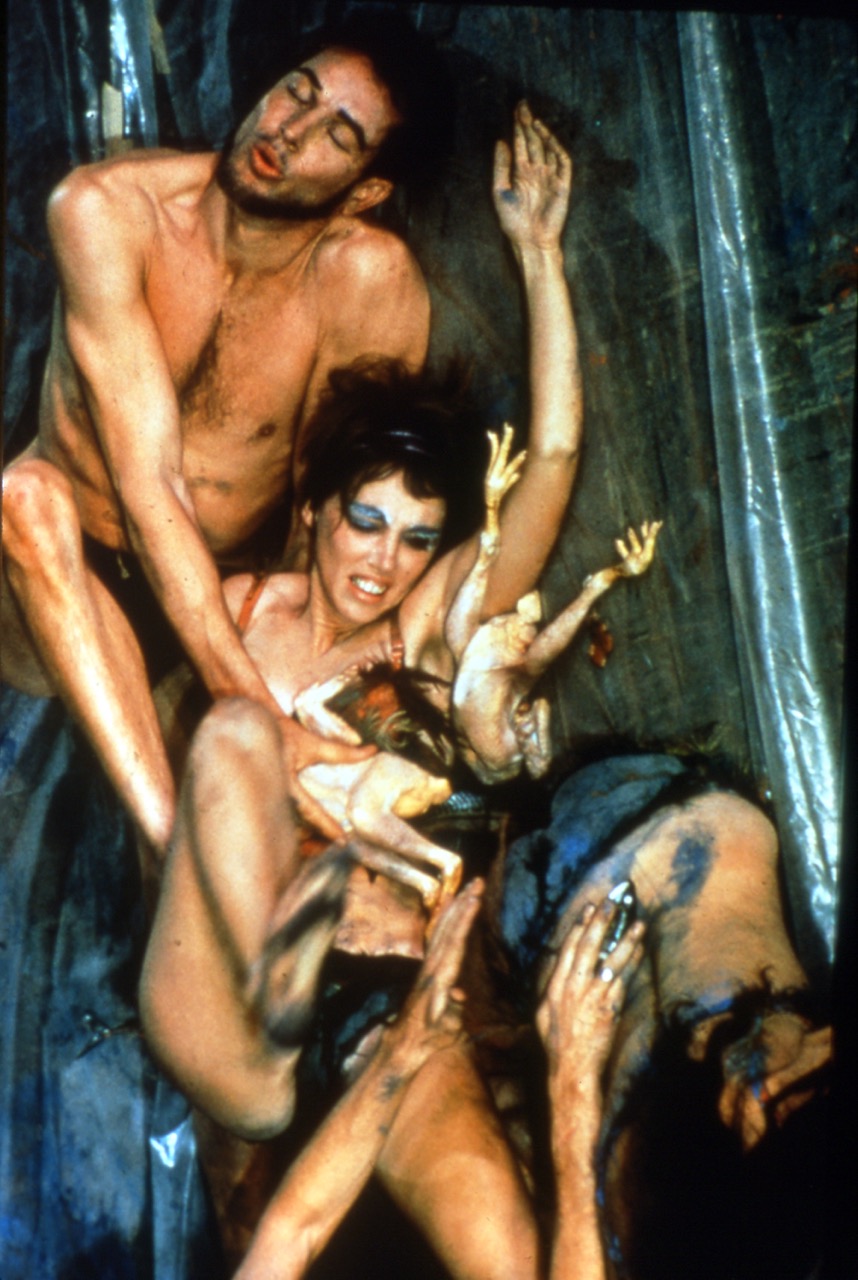 Another gallery is devoted to Schneemann’s legendary Meat Joy (1964). The dream-inspired performance epic was first staged in Paris in May 1964, in London one month later, and again in November at New York’s Judson Memorial Church. Supplemented by posters, preparatory sketches, and photo documentation, the video of Meat Joy (converted, recombined film footage from the three performances) more than hints at the piece’s transgressive physicality. One also hears recordings of Notes as Prologue (the work’s English and French spoken overture), and the work’s audio score: period hits by Elvis, Leslie Gore, Dusty Springfield, the Supremes, etc. And yet, clearly you had to be there to see, hear, and especially smell the performers’ nearly naked bodies, lubricated by sweat and the meat of Meat Joy (sausages, dead fish, chickens).

I once asked Schneemann if she considered Meat Joy a feminist corrective to contemporaneous, blood-soaked, shamanistic performances by Hermann Nitsch and other Viennese actionists. She demurred. But a 1983 letter that Schneemann sent to Artforum supplies the answer: “In early male performance art the panoply of physical taboos, mutilations, and violations . . . is understood by feminine analysis as the crazed expulsion of female complementarity.” As for “mythic associations,” hers are not “Dionysian,” the artist emends, but “properly Aphroditean—Goddess of human passion and of unity of desire and will.” 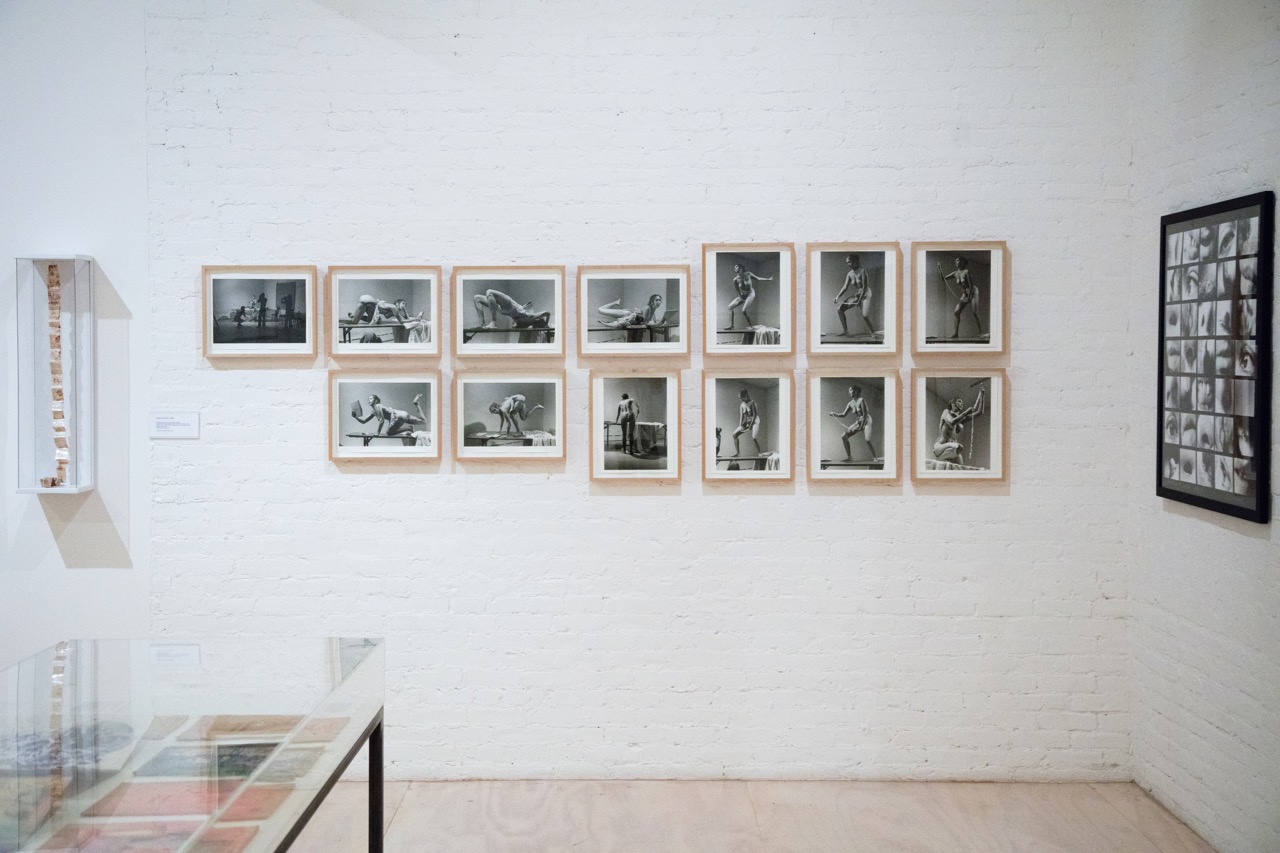 Schneemann’s most famously transgressive work, Interior Scroll (1975–77), also on the second floor, appears principally in sensational photos of the naked artist, shot from below, removing a typewritten scroll from her vagina as she reads its screed directed to a “happy man / a structuralist filmmaker” who can’t be bothered to give her work a serious look. That organically soiled manifesto now hangs hermetically sealed inside a tasteful case. A wall label testifies to the voracious adaptability of the art market: the scroll belongs to a famously aggressive male hedge fund manager and his wife—a feminist trophy amid their hoard of bad-boy art. 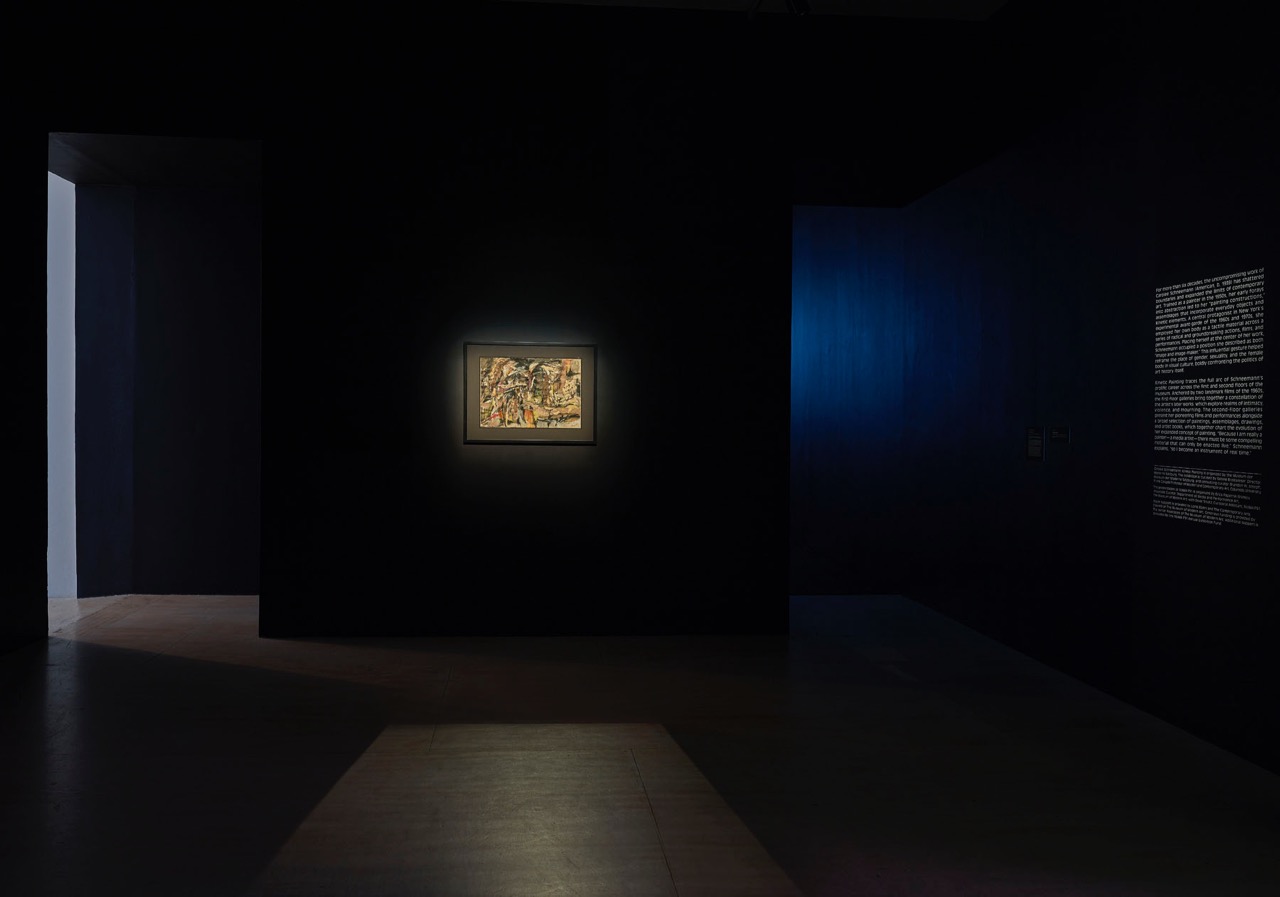 The first floor picks up where the second leaves off, but initially backtracks with Schneemann’s painting Firelights (1960). Theatrically lit, alone, in the darkened first room, it functions here as a jewel-like foil for what lies beyond—the artist’s most scandalous film, Fuses (1964–67). The flip side of the wall on which Firelights hangs forms the rear of a black box in which viewers can sit comfortably to watch her trippy, eighteen-minute paean to summertime, cozy domestic interiors, and above all to vigorous, adult sex between Schneemann and her then lover, composer James Tenney; their sucking and fucking alternately observed and ignored by the artist’s no less beloved cat, Kitch. Schneemann cut up, painted on, burned, scratched, baked, and layered the exposed film stock, producing a richly textured cinematic experience that aims to fuse the materiality of film with intensities akin to those of the bodies the camera records. When screened at Cannes in 1968, enraged male audience members tore the place apart, she maintains, like the riots that allegedly greeted the 1913 debut of Stravinsky and Diaghilev’s Rite of Spring. 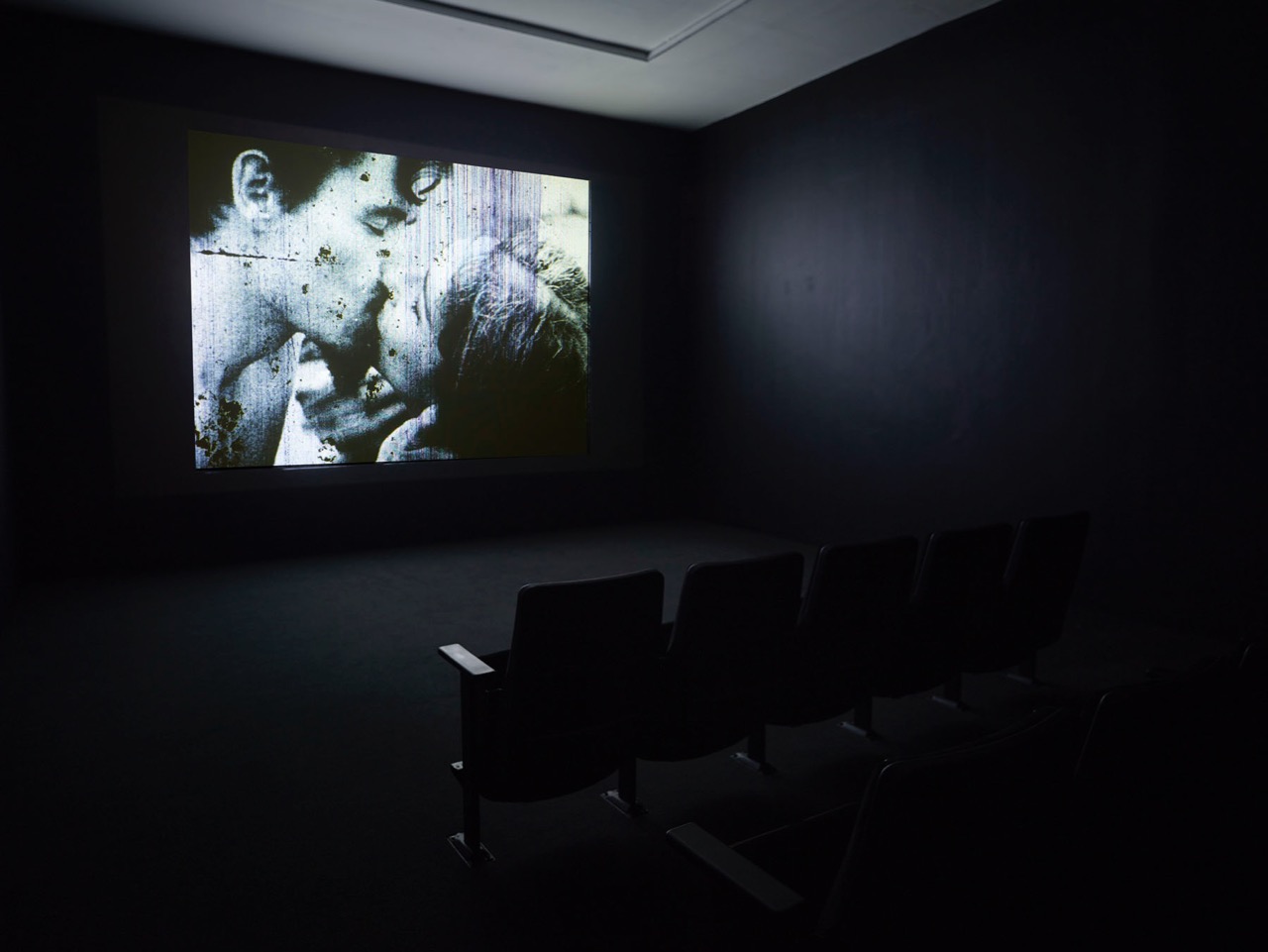 Of Devour (2003–04), a multichannel video installation, Schneemann notes its “three seconds of chaotic war footage [juxtaposed] with three seconds of normal intimacy.” The generalization “chaotic war footage” exemplifies a problem with some later work. Take, for instance, Dark Pond (2001–05), a dozen photographs of people plunging from the Twin Towers to certain death onto which Schneemann has added a decorative scrim of agitated brushwork. At the National 9/11 Memorial Museum, a wall text quotes a witness: “You felt compelled to watch out of respect to them. They were ending their life without a choice, and to turn away from them would have been wrong.” The same cannot be said for the act of looking at images of those tragic, anonymous figures through an aestheticized veil of paint. 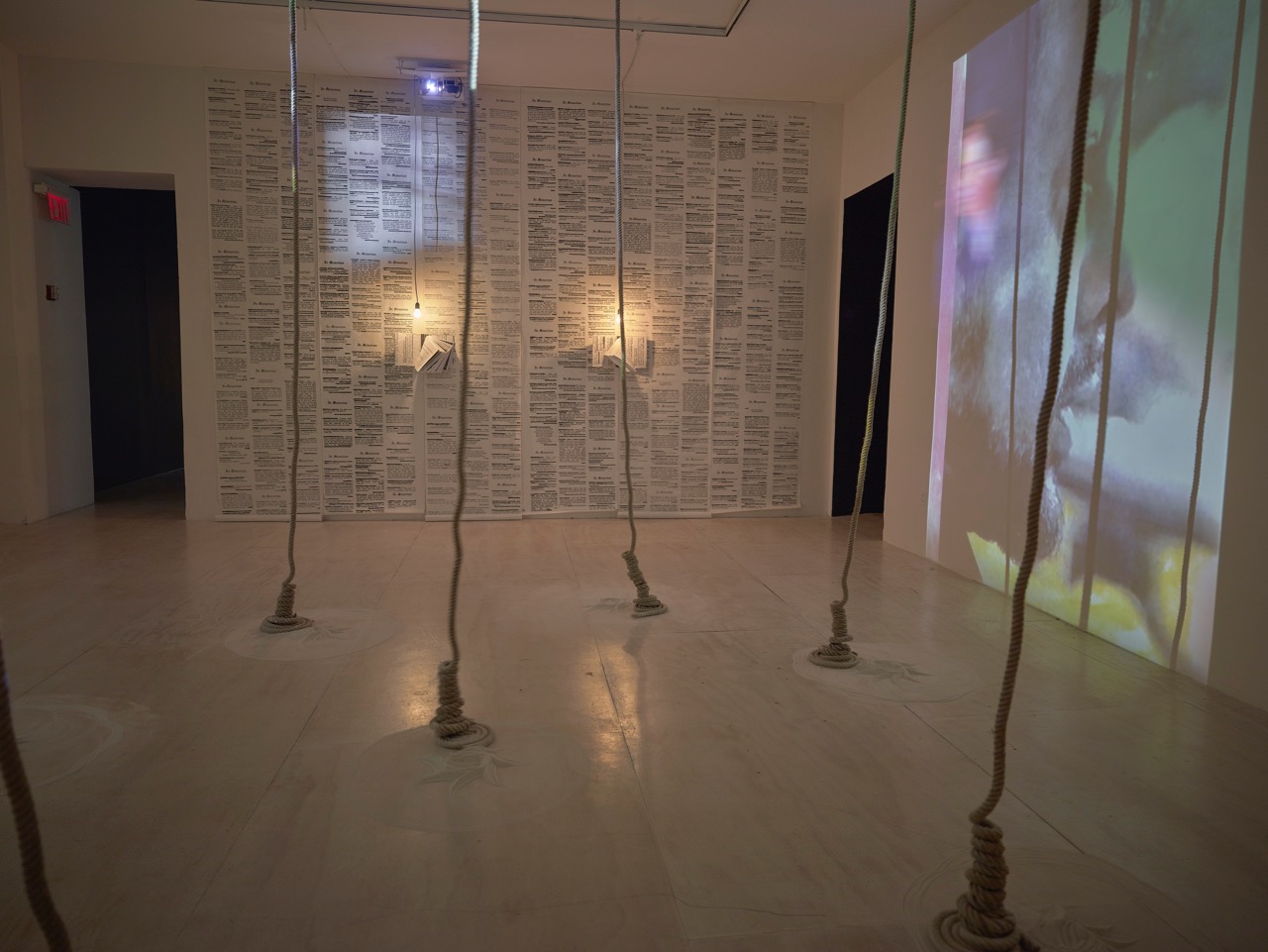 Altogether more concrete and heartfelt, Mortal Coils (1994–95) supplies a valedictory ending to the exhibition in its final gallery. Framing this installation of slowly rotating coils of suspended rope are projected images of fifteen of the artist’s friends who died between 1992 and 1995, one wall covered floor-to-ceiling with newspaper obituaries, their proper names redacted, supplemented by an artless binder of laminated plastic pages. These identify, among others, John Cage, Derek Jarman, Charlotte Moorman, David Rattray, and Hannah Wilke—a mournful naming that, in the artist’s words, counters the “incapacity of our culture to attend to personal loss and grief.” The greatest strength of Schneemann’s work is its assertion of her body’s centrality in giving poetic shape to a life lived in awareness of the many challenges to our ability—whether individually or collectively—to recognize and revel in our messy humanity.

Born in Montreal, Canada, David Deitcher is an art historian and critic whose essays have appeared in Artforum, Art in America, Parkett, the Village Voice, as well as in anthologies and monographs on such artists as Sherrie Levine, Felix Gonzalez-Torres, Isaac Julien, and Wolfgang Tillmans. He is the author of Stones Throw (Secretary Press, 2016) and Dear Friends: American Photographs of Men Together, 1840–1918 (Abrams, 2001). Since 2003, he has been core faculty at the ICP/Bard College Program in Advanced Photographic Studies. He lives in New York City.