Nonfiction
A Horse at Night

In her first nonfiction book, Amina Cain uncovers peculiar ecstasies in the solitude and mysteries of the writing life. 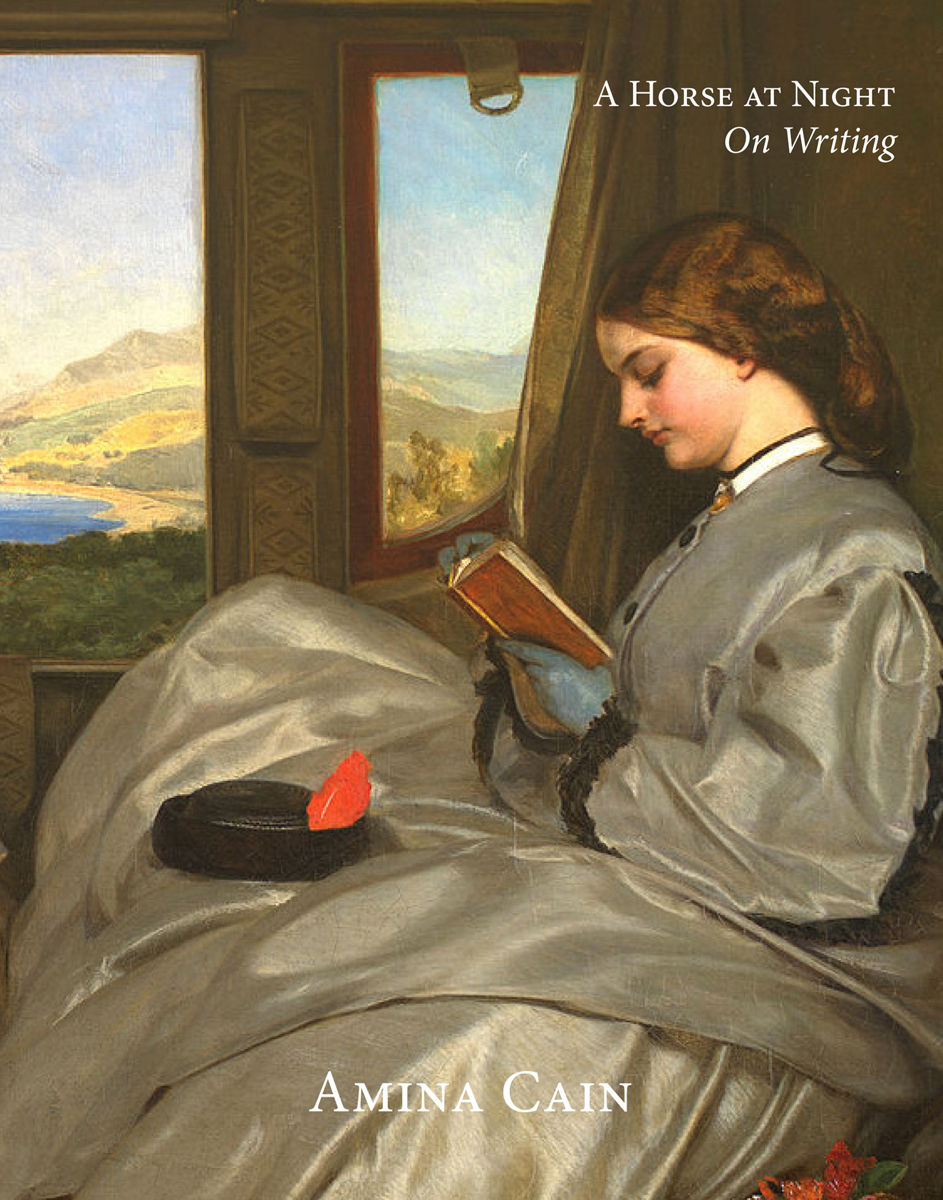 At the end of Amina Cain’s 2020 novel Indelicacy—a tale of art admired and ambiguously attained—the narrator says: “Sometimes I am immersed in my writing, ecstatic; sometimes I am only able to write one paragraph. On certain days I hate that paragraph.” Who doesn’t? Nothing so vexing as the writer who claims to spend a few blithe morning hours at the desk, then a guilt-free afternoon of tennis or whatever. In A Horse at Night: On Writing, a shifting, elliptical essay on the writing life, Cain admits the crushing heaviness of composition, and the airy fantasies that attend it. She “grazes” at her writing—a metaphor she shares with Roland Barthes, on his reading—and she dreams (via Italo Calvino) of an impossible lightness. A Horse at Night is in part about this hope, but more ambitiously it’s an allusive and engaging account of the raptures you’d miss if complete creative ease were really possible.

But what does she mean by “writing”? Early in the book, Cain is interested in the intense difficulty, and sublime dividends, of something seemingly quite basic: how to describe a fictional character’s physical appearance. “Once again I arrive at what I love most about art, about writing. How things appear, and the richness of appearances.” She cites novelist and critic Francine Prose, who says that a reader does not need to know what a character looks like to imagine them. Quite right—so what is such a description for, exactly? It suspends us, according to Cain, in one single moment, enacting in this fashion something close to what a painted or photographed portrait does. As a vision of what literature can effect, this is just the first among Cain’s examples to conjure a meditative halting or ecstatic peace; others include the desert and ocean—also, death. This imagined state haunts the whole book, and seems to Cain both desirable and capable of undoing her ambitions. (Maybe we all have this fantasy: to write without having to write.)

Consider for example her thoughts about darkness and obscurity, indebted (among other writers and artists) to Jun'ichirō Tanizaki’s classic essay on darkling Japanese aesthetics, In Praise of Shadows (1933). For Cain, certain images are emblematic of the murky, placid condition in which writing might take place—or, in what and how these pictures represent, of a state of body and being that fascinates her in art or life. There is Lucas Emil Vosterman’s Backgammon Players (1630), in which candlelight renders all mysterious. Or the long tradition of paintings of figures abroad by night, contemplating the moon. “A scene of darkness, whether in writing or art or film, allows for a break, and a bit of quiet, like having a small pillow laid over your eyes.” A Romantic notion, so it seems: that art or writing might provide this muted refuge, cooling shadow.

How interesting or original is this? You might well conclude that some of Cain’s longings, not to mention the way she expresses them, risk sounding banal. She wants, lacks, imagines an authenticity in herself and her work: “Write into the winter, and the summer, and autumn, and spring. Write into the snow and flowers and the wreaths and the wallpaper.” It sounds attractive, but what is the nature of this into, if not a naive idea of intimacy between word and thing? At times Cain seems to embrace somewhat misty-eyed notions of truth in creative solitude, some talismanic-mystical relation to animals and landscape, a faintly so-what account of the value of friendship. At times A Horse at Night can read like writerly self-help or easy consolation, even if its author is aware of her tendencies: “I myself have a romantic imagination; I fall victim to that trap. I have always carried warmth into the cold.”

Except: there is something a little off in even the most straightforward of Cain’s assertions. “I write to see what is inside my mind,” she says—which is entirely conventional. But what she discovers is frequently peculiar, or at least so oddly phrased that you have to stop and go back, hearing an eccentricity that was easy to miss the first time. This is in her statements about animals, for example: “A dog running has always been one of my favorite things to see. Also a horse.” And in this simple but skewed perspective: “Compared to dinner, lunch can be so boring, without the same kind of depth.” Forget style or syntax—who do these opinions sound like? Like Gertrude Stein, certainly. And Claire-Louise Bennett, whose garrulous shut-in narrator in Pond is briefly invoked here as one of Cain’s contemporary affinities. At such moments, A Horse at Night reveals itself as a stranger and more exacting (in thought, in tone) book than its ambulant, dissolving themes appear to allow.

It is also—in this it resembles Bennett’s recent novel Checkout 19—a teeming account of a writer’s reading habits and admirations. Cain’s method, if that’s what it is, consists in fleet-footed movement from one writer or work to the next, following logics of drift and sudden stoppage (as befits her artistic interest in hesitation). Marguerite Duras is an essential reference point, especially as she is nearly unique among novelists in moving so daringly between fiction and the cinema. Lolly Willowes by Sylvia Townsend Warner provides a path into thinking about the creative uses of retreat from the world. Elena Ferrante’s writing on female friendships coaxes Cain out of her resistance to considering, as material for contemporary fiction, their “toxic” (too easy a word) turns. Cain is interested too in paintings of women reading—her own reading matter is intimately strewn about her book, as if for a lazy afternoon’s reflection. But the enterprise is anything but casual, in the end. To write about your reading and writing is also to face the question that comes to every author in middle age: How many more books are left to me? A Horse at Night pauses to ask that question, and beguiles the time by adding one more book.

Brian Dillon’s Affinities: On Art and Fascination will be published by New York Review Books in March 2023. He is working on a book about Kate Bush’s 1985 album Hounds of Love.