A metafictional coming of age through fiction, by the author of Pond. 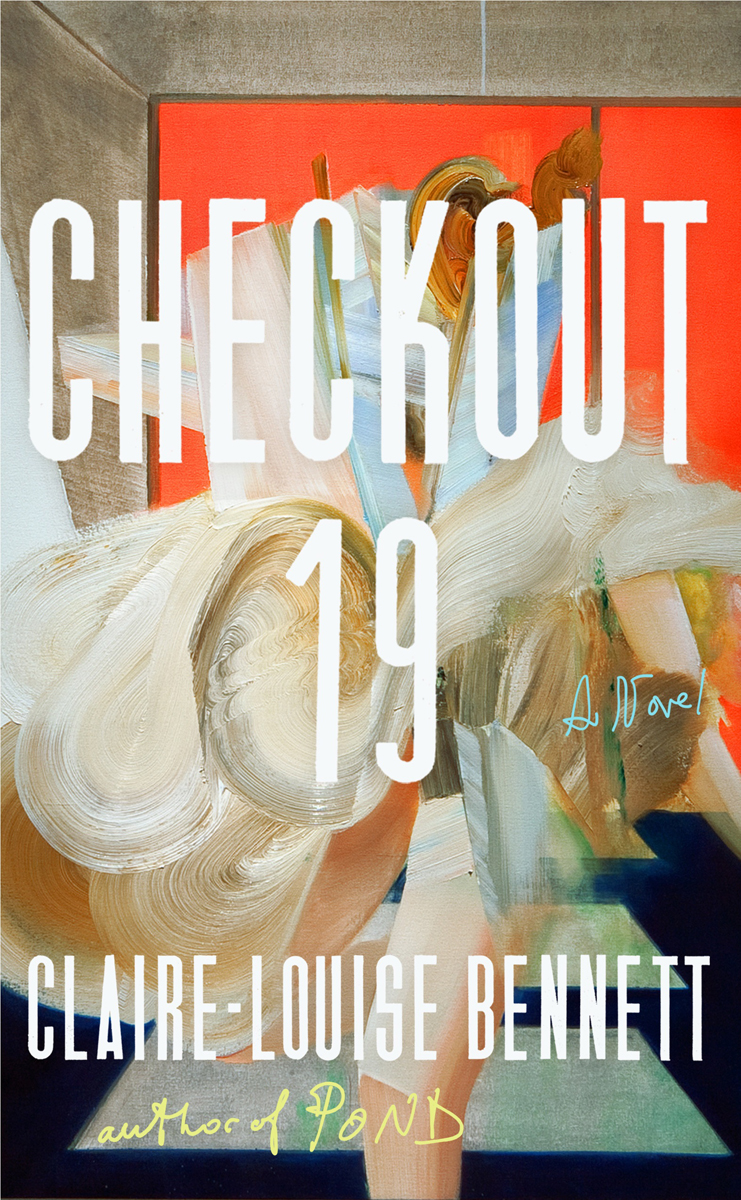 “Get real. Get real. We didn’t want to. No. No. No we didn’t.” The narrating voice in Claire-Louise Bennett’s debut novel, Checkout 19—her first book, Pond (2015), was a bristling, garrulous collection of linked stories—is playful, importuning, and repetitive. A finger jabbing the reader’s breastbone, a reminder that this tale is being told (but to whom?) and not just calmly laid upon the page. Both Pond and Checkout 19 include a kind of autofiction: like her nameless protagonist here, Bennett grew up in the southwest of England, studied literature and drama in London, and has lived in the west of Ireland much of her adult life. Pond placed its narrator in a country cottage and let her scrutinize things and textures near at hand. The scene was mostly static, adventure all in the voice, by turns rapt and digressive. Checkout 19 expands the plane of incident, but we’re still in the presence of a shut-in mind—this novel is a biographia literaria, a syllabus, a warning about the trouble books will get you into.

It’s a novel in thrall to other fictions, including those of Ingeborg Bachmann, Ann Quin, Annie Ernaux, Fleur Jaeggy. Bennett loves litanies, and she indulges here in many lists of authors and titles read and unread from childhood to the present. But first she essays a tortuous disquisition (worthy of Samuel Beckett, Roland Barthes, or Michel Butor) on the printed page as fertile field for concentration and distraction. “We look down at the right page and up at the left page. We do actually. And we nearly always read the left page much more slowly than the right.” Here is a speaker, and reader, who seems to pay too much and too little attention, all in the same pass over a page. Her intensity and waywardness will structure the novel to come. Precise and significant moments will give way easily to daydreaming fantasy, stories get told and retold differently, so that it seems Bennett (or her fictional stand-in) cannot help writing while she is writing.

When reading, on the other hand, she is frequently not reading. Bennett is extraordinarily good at describing the perplex of curiosity and lassitude into which a book may throw a child. The narrator grows up in a household with few books, some of those hidden away for adult perusal: a grisly volume about Victorian murders, shiny and embossed Danielle Steels, a mysterious Roald Dahl that was clearly not for kids. At the local library, she chooses one book at a time and sometimes just leaves it lying beside her on the summer grass: “As if the only thing you could do with a book was read it.” At school, she tries to draw a picture of a male teacher, but the lines coil and muddle before turning into words instead. The teacher in question discovers a story the girl has been writing in her exercise book and asks if he can read more. Not for the last time, her raptures of private language have been exposed and judged promising or strange.

Odd ideas about who she would find there, and lofty notions about books, take her to university: “We were students of literature but we didn’t read in order to become clever and pass our exams with the highest commendations—we read in order to come to life.” Ambiguous phrase, that last one: to start living, or merely approach it? E. M. Forster’s A Room with a View sends her off to Italy “in search of Love.” Back in London she reads The Female Malady, Elaine Showalter’s 1985 study of women and madness, which flings her into a state of fury. Meanwhile various subpar boyfriends try to mold her vision of the writing life, refusing to let her read Sylvia Plath and Anne Sexton, declaiming aloud from Saul Bellow’s Herzog and reading biographies of “great men . . . in a state of bovine equanimity”—latter phrase borrowed from Janet Malcolm. There is worse to come in terms of encounters with the aspirant literary male. Still, the narrator prefers to read men: it’s a way of finding out what they get up to, how they speak to each other.

If Checkout 19 (the title comes from a supermarket where she works) did no more than obliquely render one young woman’s literary awakening, it would be a worthy follow-up to the jagged, baroque pleasures of Pond. But Bennett doesn’t so much recount this story as perform it, frame it, subtitle it, and heckle her own performance at the same time. The novel is interrupted in places by a tale, begun in her twenties, about one Tarquin Superbus: an aesthete or dandy who may exist in the Renaissance or the nineteenth century, reside in Venice or Vienna. (His name derives from Lucius Tarquinius Superbus, the last king of ancient Rome. At first I took “Superbus” as a comical reference to public transport, not the Latin for noble or proud.) Tarquin is a bibliophile whose vast library of blank books contains, it is said, a single sentence that, once read, would transform the world. Bennett’s protagonist is rewriting this absurdist story (schooled on Italo Calvino, Jorge Luis Borges, Vladimir Nabokov) as she goes, and it’s just one of several narrative wormholes that turns Checkout 19 into a rickety sort of masterpiece.

If this makes the novel sound like slightly smirky metafiction, it is anything but ironic or knowing. Yes, there are recursive moments, and forays into a kind of literary criticism when Bennett gets really carried away about Quin or Forster or Anaïs Nin. And the prose is often sumptuously self-aware; here she is on some imaginary aubergines: “imagine the transporting reflections slipping across their sleek hermetic skins.” But all of this is so peculiarly pitched, so much a product of the character’s vagrant patterns of thought and fancy, that you come away mostly with an impression of comically heightened sincerity. And a mind genuinely amazed at its own alien inventiveness. On the narrative of Tarquin Superbus: “I’ve never written anything like that story since. I don’t know where it came from. From being young and at a loose end and wanting company I expect.” Alongside all its literary preoccupations, Checkout 19 is also a startling meditation on what youth knows and doesn’t know.

Brian Dillon’s Essayism and Suppose a Sentence are published by New York Review Books. He is working on Affinities, a book mostly about photography.