Water cures, lobotomies, and big pharma: an urgent examination of the failures, functions, and future of psychiatry. 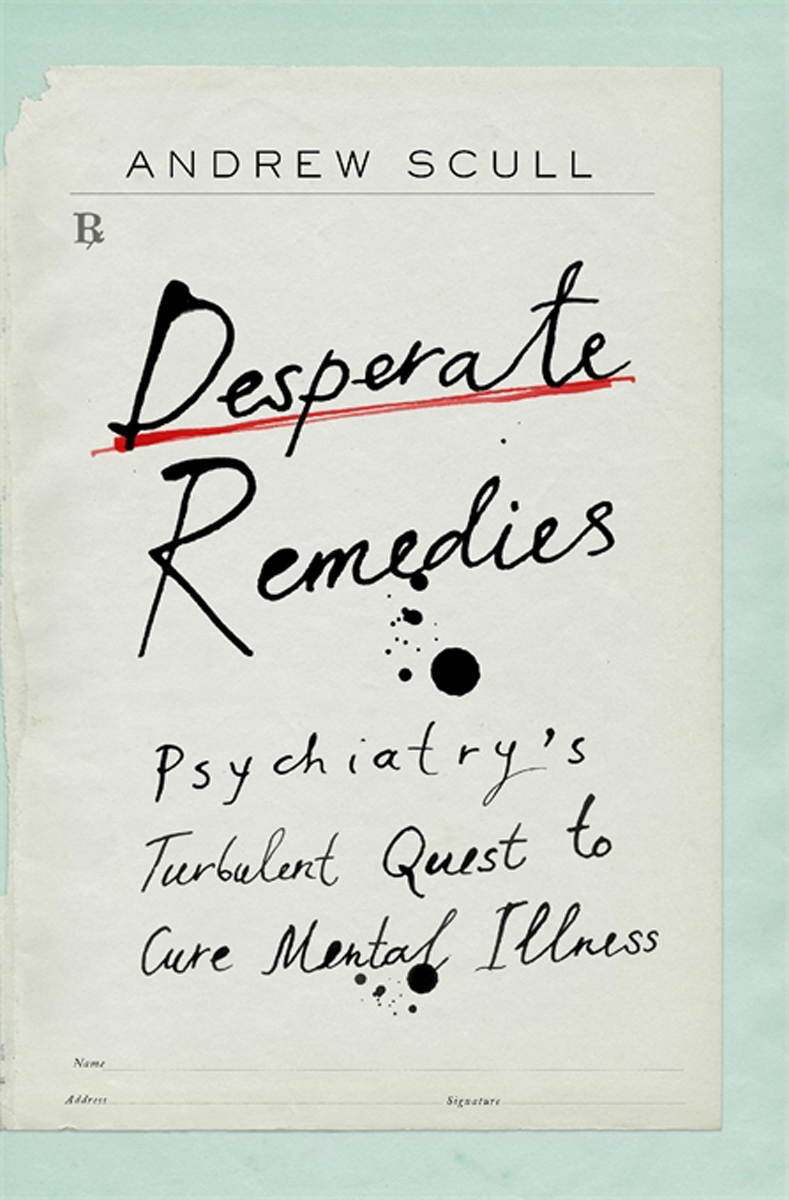 Pick your psychiatric poison from this dire historical array. Sluicing down with cold water, or immersion for days on end. Liberal dosing with camphor, strychnine, cocaine, morphine. Injections of turpentine in the abdomen. Removal of ovaries, clitoris, colon, pulling of all the patient’s teeth. “Artificial hibernation” (in other words, induced coma). Electrodes to temple or larynx. An ice pick in the eye socket. Sociologist Andrew Scull’s sober, precise, and sometimes wry history of efforts to diagnose and cure mental illness is also, unavoidably, a catalog of abuse and torture. Scull, who has written landmark studies of hysteria and the asylum system, is interested in the grisly particulars of treatment, and also more broadly in the construction over time of a profession, psychiatry, that has never quite functioned independently: always borrowing, always distancing itself, from other branches of medicine. Desperate Remedies is unconsoling about this history and what it suggests for the future.

Psychiatry was carceral from the start, and remains so even if powers and responsibilities of the old asylums have devolved to overcrowded prisons, skeletal social services, and what was once called “care in the community.” (There was no community, and nobody cared.) In the US, which is Scull’s main focus, the profession of psychiatrist was more or less coterminous, in the nineteenth century, with that of “superintendent” of a state-run asylum. Though treatments such as the rest cure and water cure were developed in this period, the main ambition was to warehouse and manage the mentally unwell. Institutional authority, combined with the extreme social stigma of madness, was a signal reason the doomed remedies Scull describes were able to flourish—each one typically for a few decades, often till its inventor had died. Black people were more likely to be locked up in the first place, and women vastly more apt, essentially, to be experimented on.

Many of the horrors I listed above derived from laudable efforts to go beyond the asylum’s custodial remit, though frequently they fed right back into the cycle of punishment and control. A lot of Scull’s narrative is about the confidence that there must be an organic origin to psychic suffering. Infection, racial degeneration, some inelastic nexus in the frontal lobes, want or glut of this or that neurotransmitter: all of these and more have been adduced. Consider the first, infection. One Henry Cotton, director of the state hospital at Trenton, New Jersey, wrote in 1916: “we have found that focal infections and the absorption of toxins may appear in the etiology of certain groups primarily held to be purely psychogenic in origin.” The consequences of this calm and tentative assertion were horrific. Until his death in 1933, Cotton carried on a program to “clean up” thousands of patients by removing suspect body parts—those he left toothless were among the more fortunate. Later studies estimate that more than forty-four percent of Cotton’s patients died. And a precedent was established for the whole profession: if the psychiatrist’s treatment did not work, he had not been radical enough in applying it.

The same pattern emerges with later remedies: the bone-cracking violence of early electroshock therapy, so-called coma therapy, the lobotomy craze of mid-twentieth-century, the vast commercial success of the first antipsychotic medications and milder drugs (Miltown, Valium, Librium) marketed to the everyday neurotic. The history of psychiatry in the twentieth century and beyond is a history of hunch and conviction, very rarely of the kind of testing and evidence becoming the norm elsewhere in medicine and allied sciences. No double-blind studies attended the invention of the modern lobotomy by Egas Moniz in Portugal, in the 1930s, nor its “perfection” by the Americans Walter Freeman and James Watts. (It was Freeman, casting around for an instrument to thrust under a patient’s eyelid so that he could sever connections in the prefrontal cortex, who first reached for an ice pick from his kitchen.) The aim was to reduce the patient to the level of a tractable child, and if he or she did not respond, then Freeman had simply not been supplied with suitable human “material” to work on.

Desperate Remedies narrates all of this with admirable clarity and care. While some of the more vicious cures, and their cruel, opportunist, or merely deluded inventors, are singled out for retrospective fury and reproach, Scull is mostly laconic when it comes to judgment, letting dismal facts speak for themselves. (He’s not above the odd moment of near-comic understatement, as when he says of electricity used on late-Victorian patients who had lost the power of speech: “Few remained mute for long when subjected to these interventions.”) Scull’s restrained approach continues as he gets closer to the present and considers the pharmacological carnival that began in 1988 with Prozac. Antidepressants had been around for decades to treat the more intractable forms of melancholia; drug companies now found it profitable (and popular among compliant media) to direct their products at the lesser category of a “major depressive episode.” Scull is not the first to point out that the principle behind this move—the supposed presence of an imbalance in serotonin—was and remains entirely unproven.

The SSRI saga, and its attendant commercial and research skulduggery, brings Scull to a particularly American perplex of psychiatry, big pharma, and private insurance. (Always a renewed task for the non-US reader of a book like Desperate Remedies: to grasp the idea that one’s sanity might depend on such peculiarities as “managed care” and out-of-pocket “deductibles.”) At various points in the history of psychiatry, there have been theories and movements that rejected the idea of diagnosis. The most obvious is psychoanalysis: though Freud and followers are accorded their due here, it turns out their postwar heyday was shorter-lived than cultural memory suggests. The more pressing concern for Scull (who is by no means an old-style anti-psych activist) is that diagnoses such as schizophrenia and bipolar disorder have begun to break down after decades of scrutiny. An entirely new conception of what mental suffering means may be needed: “If we are to confront the challenges that mental disorders present to all of us, we shall have to take account of social and political realities.” But in the age of DSM-5, with its minutely ramifying categories and all they imply in terms of money, access, patients’ reassurance and their sense of self—that renovation may be difficult and professionally unappealing. Not a conclusion guaranteed to brighten anyone’s mood, but an essential one.

Brian Dillon’s Essayism and Suppose a Sentence are published by New York Review Books. He is working on Affinities, a book mostly about photographs, to be published in 2023.