How I met my mother: a fabulist French film about grief and solace by the director of Portrait of a Lady on Fire. 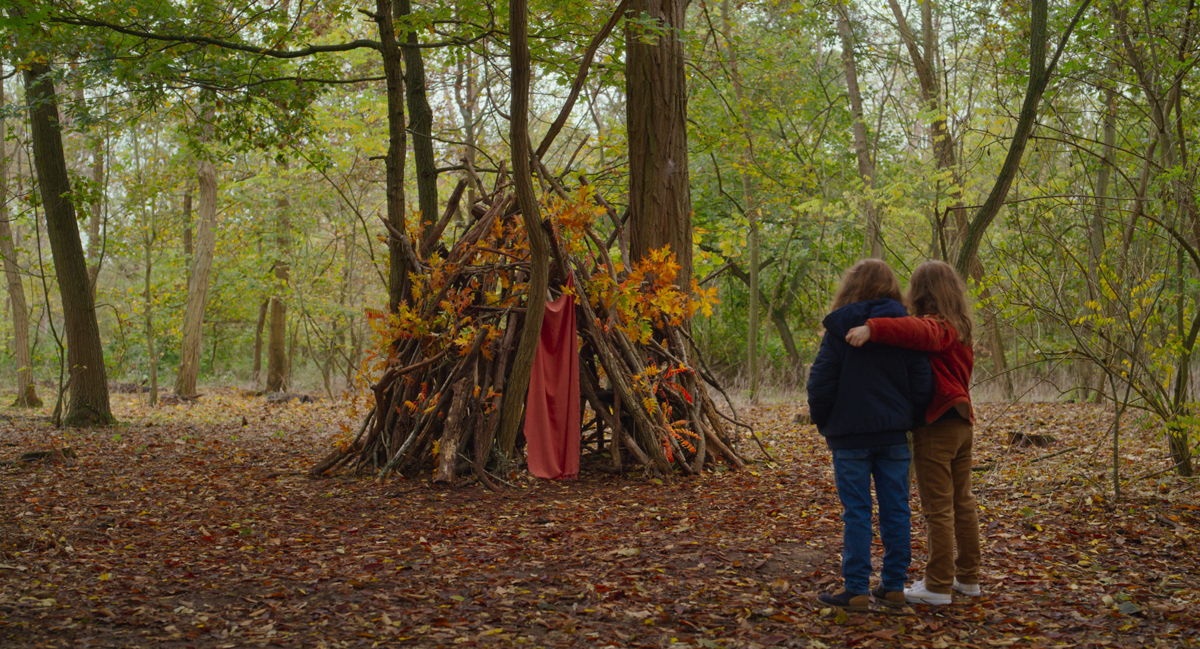 One often hears of the artist paralyzed by breakout success, smothered by expectation, their follow-up effort burdened by one or more of the many odious forms an excess of self-consciousness can take. Tales of the sophomore slump describe a familiar arc: the creator in conflict with herself, or her audience; a battle to be won or lost; a newborn critical reputation at stake. Portrait of a Lady on Fire (2019) was Céline Sciamma’s fourth feature, not her second, but it seems of a piece with the French writer-director’s tendency away from received narrative frameworks of every sort that she has described its ecstatic reception (it received ten César Award nominations, among many other accolades) as a source of newfound confidence. That confidence fueled Sciamma’s pursuit of the curious vision with which her latest film, Petite Maman, began: two little girls building a hut in woods, not cousins or schoolmates but mother and daughter. 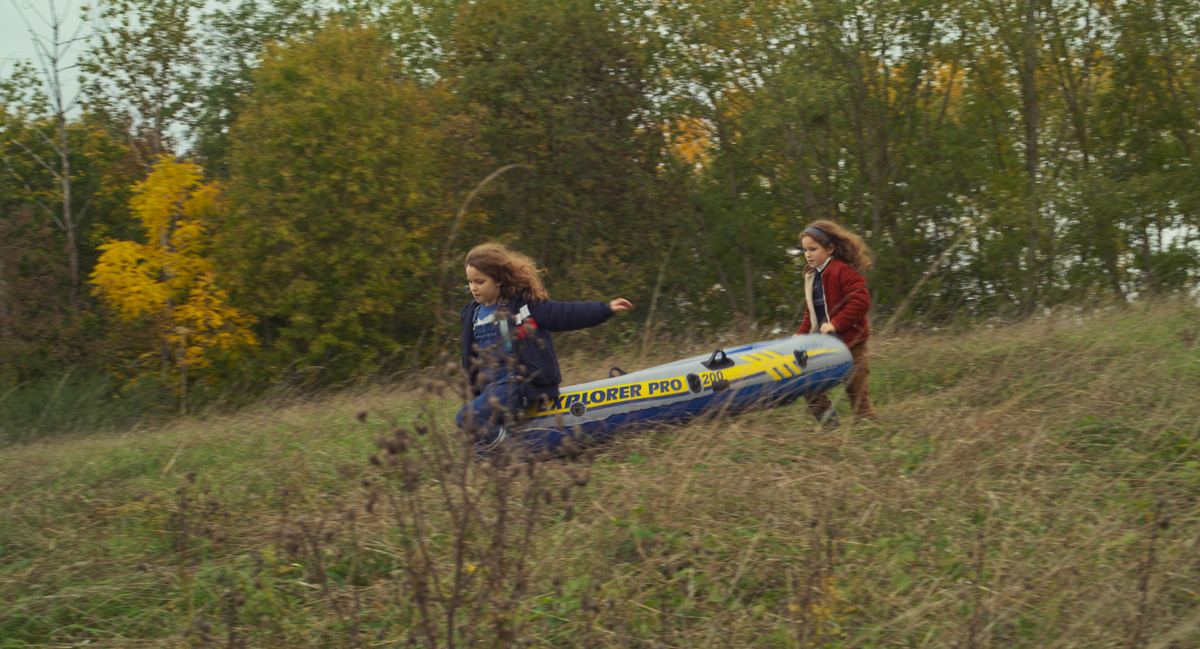 Or might they be sisters? A story of spectral intervention told in decidedly un-spectral terms, Petite Maman builds a riddle into its fable of grieving, loss, and return: If a mother and daughter could meet at the same age, how would they relate? A slender seventy-two minutes, the film begins in the aftermath of a death: eight-year-old Nelly (Joséphine Sanz) is making the rounds at a senior-care facility, bidding farewell to a series of older women. In a final, emptied room stands Nelly’s blank-eyed mother, Marion (Nina Meurisse), daughter of the woman to whom they had not said a proper au revoir. On the drive to Marion’s childhood home, in the Parisian exurb of Cergy-Pontoise (Sciamma’s hometown), Nelly feeds her mother cheese curls and a juice box from the back seat. In the next scene, Marion carries a sleeping Nelly into the house they have come to empty out for good. 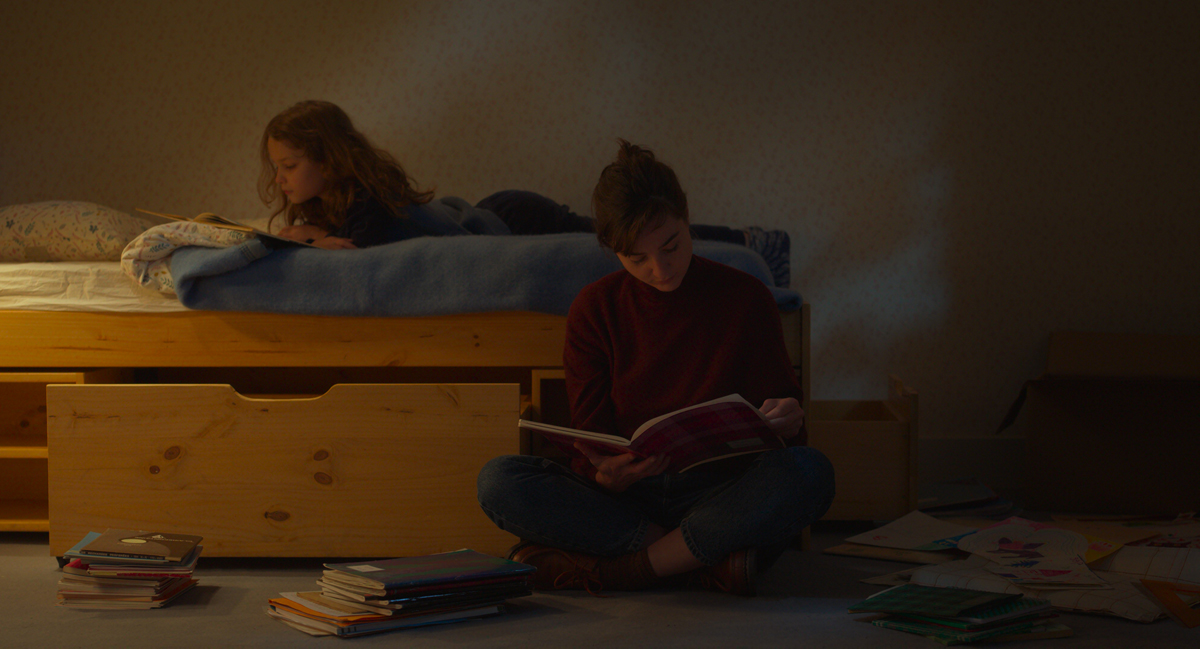 More than the acts of cleaning and sorting that follow, the ensuing episodes emphasize animal rituals of cooking and eating, sleeping and waking, disappearance and return. The question of goodbyes recurs: Nelly enacts a sort of proxy farewell to her grandmother with Marion, whose mood of anguished distance pierces her daughter. Nelly asks about the hut Marion built in the woods behind the house as a girl, if it upsets her to return to a place where her childhood books and games still pack the walls. The shots are long and the silences rich; the dialogue throughout sparse and simple enough for someone with my basic knowledge of French to forgo the subtitles. You ask a lot of questions at bedtime, Marion says. “I’m interested; I’m a child,” Nelly replies. Her wish not just to reach but to know her mother appears to discomfit Marion, who vanishes overnight; she was too sad to stay, Nelly’s dad (Stéphane Varupenne) tells her the next morning. They will finish the job alone. 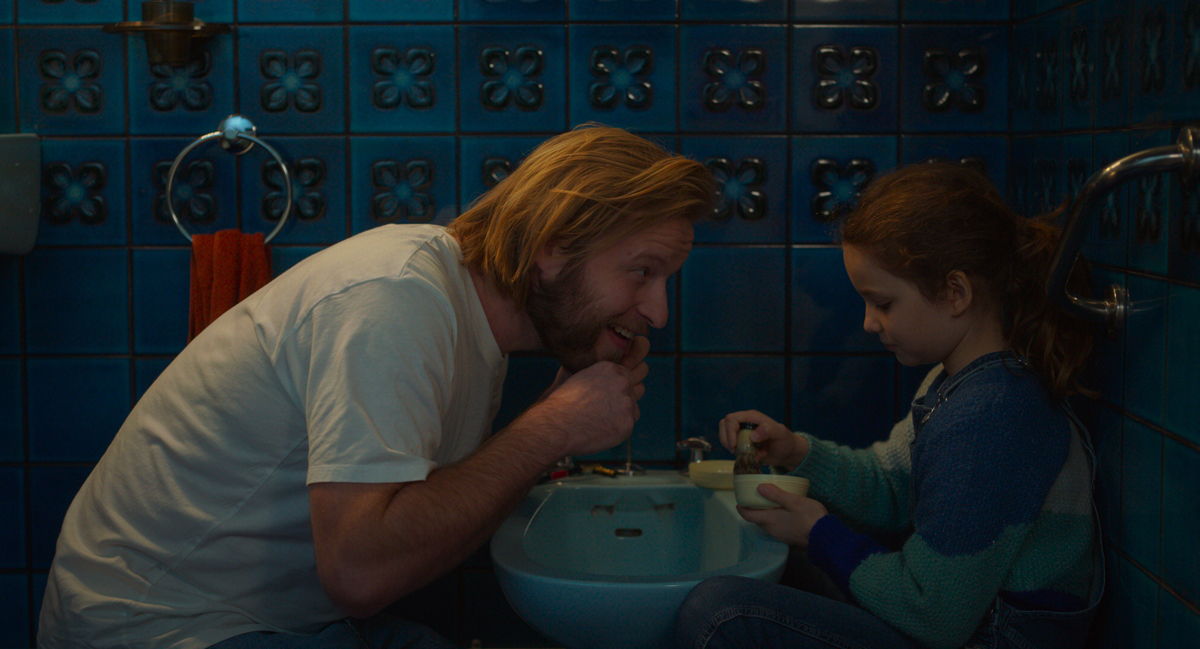 For Nelly that means venturing into the woods, where on her first wander she encounters a little girl struggling in her work on a hut made of fallen tree branches. One waves with her full arm at the other, and the other waves her full arm back. Their meeting is easy, unsurprised; help was needed and help arrived. Her name is also Marion (Gabrielle Sanz, Joséphine’s twin), and though neither girl mentions it, they resemble each other in almost every particular. Their twinning appears to be a kind of open secret between them, its terms both imprecise and too obvious to acknowledge. Together they venture back to Marion’s house, which Nelly discovers to be a restored version of the one she and her father are packing up. It is when Nelly recognizes the sleeping woman in a bedroom off the hallway as a younger version of her grandmother that she shows her only sign of fear: pulling on the jacket she had just pulled off, Nelly leaves Marion and races home. 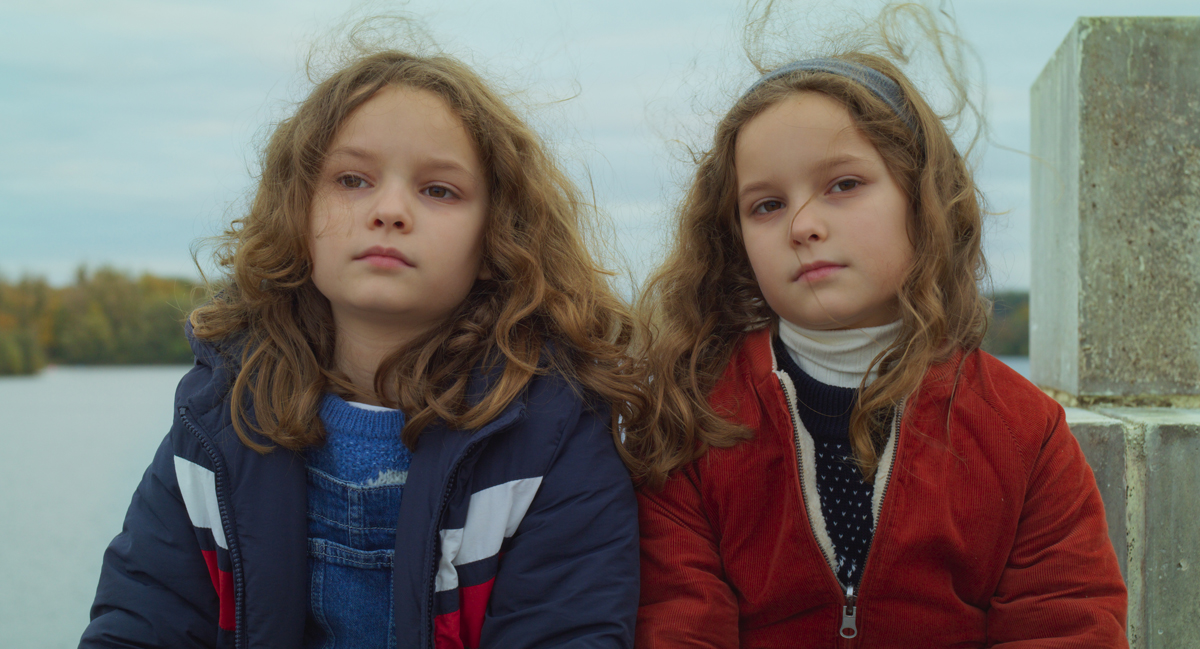 Sciamma presents this scenario with none of the cues one might seek in a ghost or time-travel story; nor is she interested in stoking the conflict on which such stories generally turn. Nelly and Marion soon reunite, make crêpes, play-act, have adventures—their union unfettered, framed as a matter of openness to its possibility. In their performances, which cross watchful, sober constraint and eruptions of antic pleasure, the Sanz twins embody the only tension that seems to interest Sciamma: one found in the rhythms of play; the rustle of a sweater pulled overhead on a silent, early winter afternoon; the squelch of Superga sneakers on linoleum; the electric hush of secrets confided between fast friends sharing a bed. It is this aesthetic of consolation that smooths the parts of Petite Maman that could have remained jagged: the smiling, unquestioning acceptance of both Nelly’s grandmother and her father of the second girl’s appearance; Marion’s calm, pensive response to Nelly’s confession that she is, in fact, her daughter. 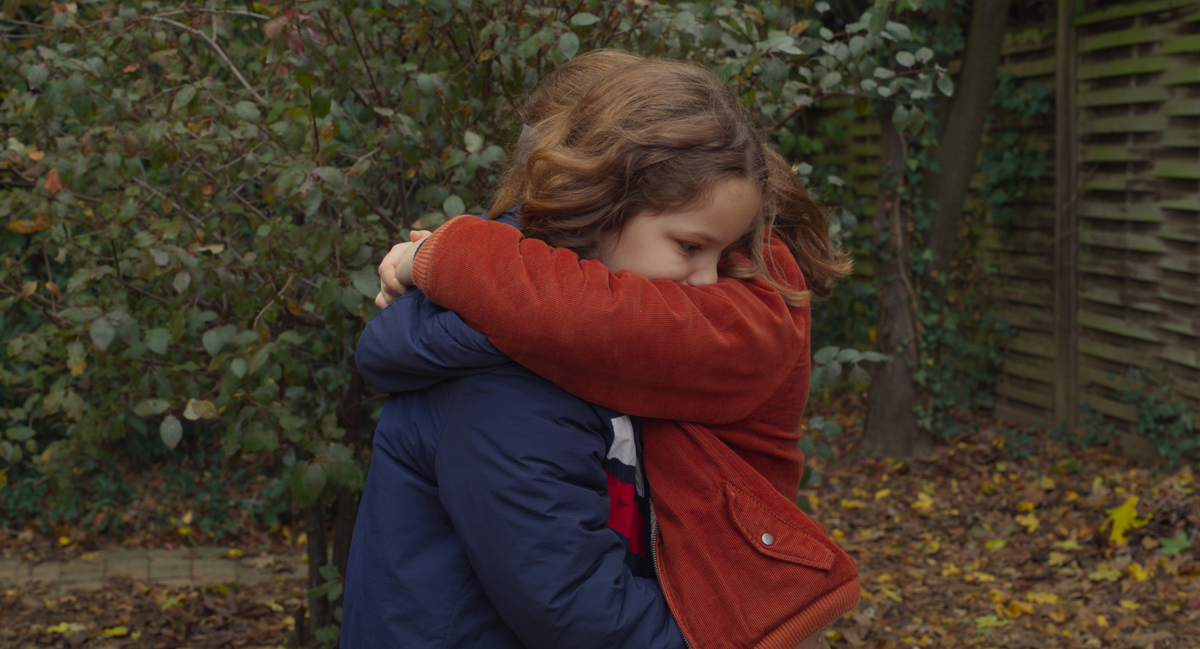 On the cusp of a surgery that will safeguard Marion from the same condition that befell Nelly’s grandmother, Marion assures Nelly she is not responsible for her mother’s sadness, premonitions of which hover about the child. That sadness extends beyond the adult Marion’s grief; Sciamma’s fable proceeds not from Nelly’s desire to cure her mother’s sorrow but to separate from it, view it from a clear but loving distance. Her mother’s childhood having come to a definitive end, Nelly seeks a portal not back in time but to a common plain, where they might meet as equals even briefly, and only once. The magic of Petite Maman is the ease with which it depicts their convergence, its solace a feat of willing imagination. If we are amenable, the past and the past selves of those we love most are available for conversation, camaraderie, goodbyes that look a lot like full-armed hellos. Have you come from the future, Marion asks Nelly when she first discloses her secret. No, she replies, “I came from the path behind you.”

Michelle Orange is the author, most recently, of Pure Flame: A Legacy (FSG, 2021).