Nonfiction
Index, A History of the 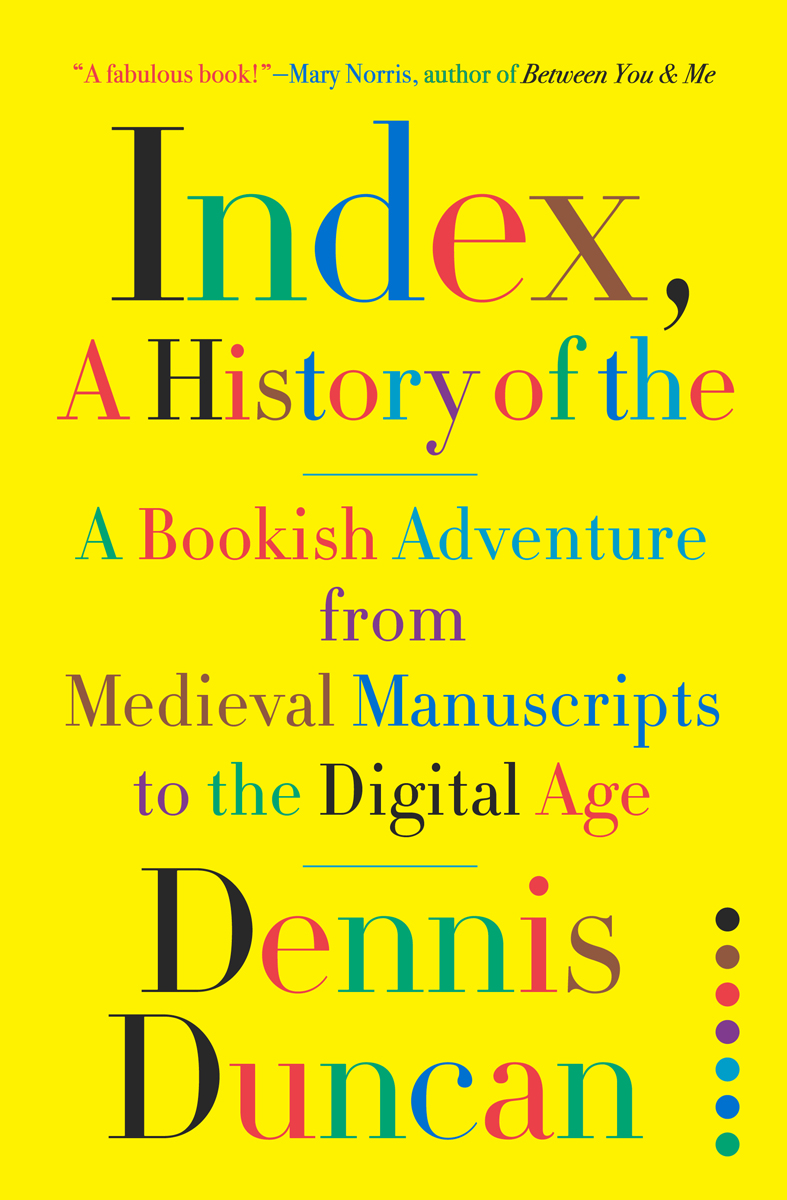 Index, A History of the: A Bookish Adventure from Medieval Manuscripts to the Digital Age, by Dennis Duncan, W. W. Norton, 344 pages, $30

“Ambrose, Bishop of Milan, reads in curious silence 59.” “X, no entries beginning with.” “Wild goose chase see chase, wild goose.” These are all entries, more or less recursive, in the index of Index, A History of the—a learned and playful study, by British academic Dennis Duncan, of a textual machinery so successful it’s become almost invisible. (Actually there are two indexes: a partial one compiled by computer, and this frolicky version by Paula Clarke Bain.) You may well have arrived here via Google’s vast concordance, and no doubt other indexes will have eased the composition and editing of this review: helped correct hasty typing, informed judgments about awkward syntax. An index is a machine for saving time and supplementing, even supplanting, knowledge. The history of indexes, which Duncan tells with admirable wit and range, is “the story of our accelerating need . . . for the contents of books to be divisible, discrete, extractable units of knowledge.” By the way: indexes or indices? Shakespeare, for one, says indexes.

The earliest indexes to complete books were devised in the thirteenth century and were independent products of an English university and French monastery. Which is not to say that tables of contents and similar litanies—otherwise known as registers and rubrics—had not existed for some time. Duncan tells us that at least five classical authors appended such catalogs to their own works. In the first century, Pliny the Elder informed the Roman emperor Titus that in providing a list of contents along with his books, he had “taken very careful precautions to prevent your having to read them.” The main innovation of the index as we know it was to keep the table of contents but wed it to alphabetical order, itself an ancient method of classification, practiced, for example, in the library at Alexandria. Arbitrariness was essential: the separation of content from the order in which it appears turned the index into “a truly random-access technology.”

As Duncan relays, its history was not seamless. For one thing, medieval or early modern authors and indexers could not assume their readers knew what alphabetical order meant. In 1604 Robert Cawdry, compiler of a Table Alphabeticall of “hard words” in English, had to instruct the reader first to learn the alphabet by heart, “perfectly without booke.” Then there was the issue of precise reference—where exactly did the index point? Tying its entries to a volume, chapter, verse, or line made sense in manuscript, but was often imprecise or insanely laborious. The advent of page numbers in printed books seemed to solve a lot of problems, though it was resisted by some printers, who tagged the index entry instead to the numbers printed at the bottom of some pages that denoted a particular signature, or bundle of paper leaves. Sometimes the reader ended up having to write extra numbers in by hand.

Nowadays, indexes come at the end of a volume, but this was not always the case, in print or in principle. In Troilus and Cressida, the index is a precursor: “The baby figure of the giant mass / Of things to come at large.” Frequently one turns to the index first, like Titus, and there is no shame in that. Except there has always been a feeling that certain readers stop there and are mere “index-rakers.” The eighteenth century was rife, maybe as much as our own, with such suspicions. Jonathan Swift decries indexes “by which the whole Book is governed and turned, like Fishes by the Tail.” In quite the most antic chapter of Index, A History of the, Duncan recounts how Whig and Tory writers of the era skewered each other in indexes, both sincere and satirical. One William King was the master of indexical laconism; his index to the work of a pedant scholar is filled with stuff like this: “His egregious dulness, p. 74, 106, 119, 135, 136, 137, 241.” (He might have spared some of his target’s blushes with “135–7.”) King also produced a mocking index to the scientific proceedings of the Royal Society. “The Head that was a Bag, p. 56.” “Hoggs that sh-te Soap. p. 66.” “Cows that sh-te Fire. p. 67.” So popular was the genre of the comical index that when King died young, a contemporary lamented he’d been “so addicted to ye Buffooning way.”

The Victorians, predictably, took the whole thing more seriously. Henry Wheatley, whose What Is an Index? appeared in 1878, is the father of modern indexing (his professional descendants are mostly women). In the nineteenth century, the boundaries of the book and even the walls of the library dissolved in the abstract space of the index. Wheatley: “The object of the general index is just this, that anything, however disconnected, can be placed there, and much that would otherwise be lost will there find a resting-place.” Indexing societies were established, and William Poole, head of the Chicago Public Library, embarked on a universal index, recording all the knowledge contained by the burgeoning field of periodical literature. Along with library catalogs and the all-purpose index cards that made them possible, projects like Poole’s are the direct intellectual and bureaucratic precursors of the information age—even though book indexes produced by computer (starting in the 1950s) remain mere logs of words and phrases, lacking those eighteenth-century desiderata, wit and judgment.

It turns out the methodical work of indexing also requires acute and sympathetic thinking: you have to know when to go for punctilious enumeration and when to generalize, where to make connections and where to hold back, allowing for the reader’s perspicacity, or impatience. All of which makes the index a fertile ground for fictional and metafictional fun. Duncan describes well the devious deployment of indexes and indexing in works by Lewis Carroll, Woolf, Nabokov, Calvino—et al. At times, his interest in the literary history of the form distracts from the fascinations of its actual practice and principles. Problems of logic, hierarchy, and style emerge quite late in the book, and some obvious questions—whence and why passim?—remain unanswered. But total knowledge, so this book teaches, is a fantasy. What happens when you turn in the index to “chase, wild goose?” Of course: “see goose chase, wild.”

Brian Dillon’s Essayism and Suppose a Sentence are published by New York Review Books. He is working on Affinities, a book mostly about photographs.