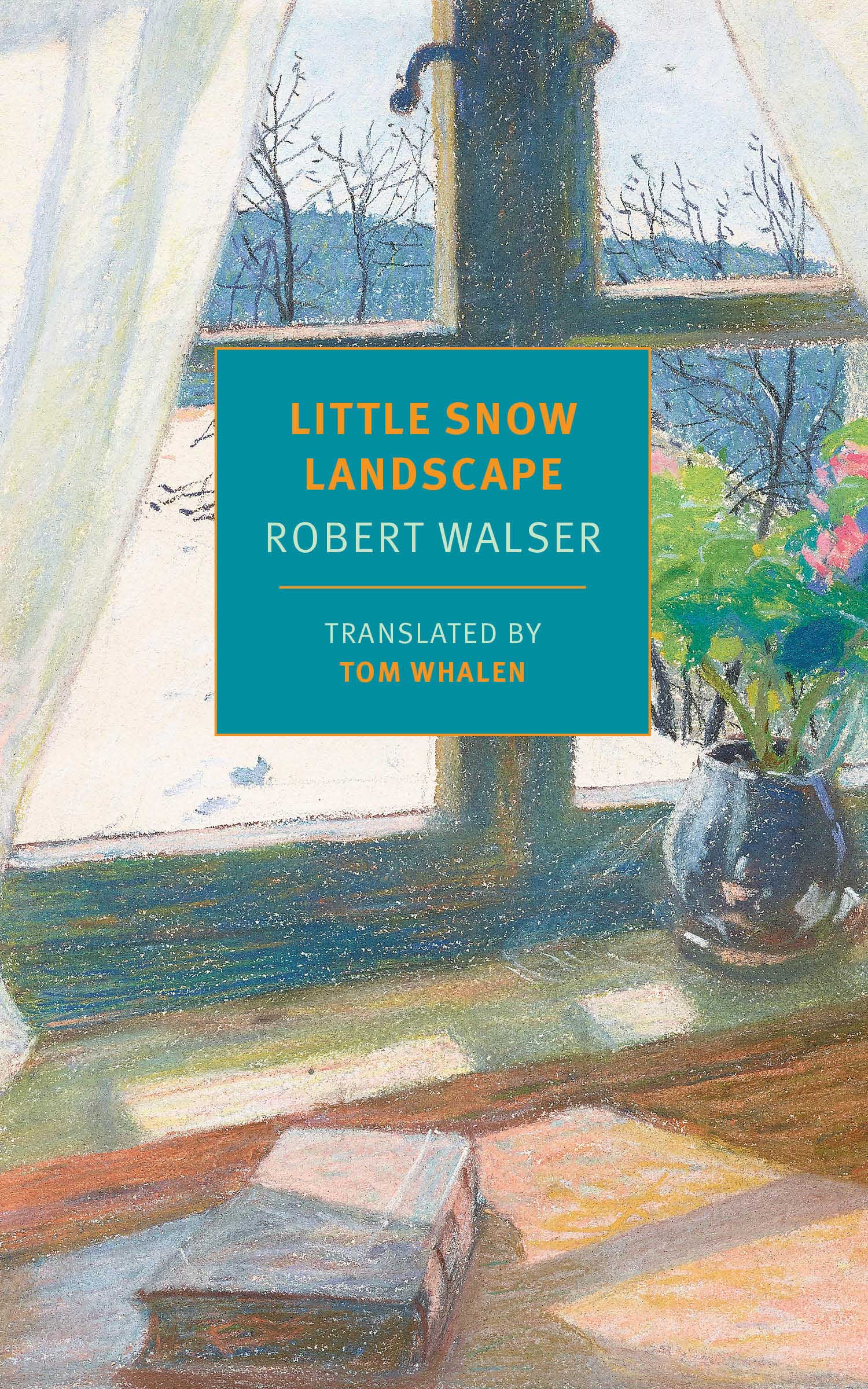 A quality of bruised optimism marks the writings of Robert Walser, a melancholia verging weirdly (or is it comically?) on messianism. His characters, as Walter Benjamin put it, emerge from the blackest night “with a little of the party spirit shining in their eyes, but distraught and sad to the point of tears.” Benjamin’s beautiful essay on him was written in 1929, the year Walser, aged fifty and diagnosed with schizophrenia, was voluntarily committed to an asylum in his native Switzerland. In his early years as an inmate he still produced lapidary, fantastical short prose of the kind collected in Little Snow Landscape, but having turned away from the world he gave up writing four years later. (He died while out walking, on Christmas Day, 1956.) Whence his decline? Following a teenage apprenticeship as a bank clerk, and a period as a servant in Silesia, Walser began his literary career energetically. A first novel in 1904, relocation to Berlin amid the artistic fever of the Secession, three more novels in quick succession, admiration from the likes of Musil, Kafka, Hesse. But he remained poor, somehow incapable, and fled back to Switzerland in 1913.

Walser concentrated now on small, strange, intimate—what, exactly? Stories? Essays? Fables? Memoirs? Travel writings? In his translator’s note, Tom Whalen, who has selected sixty-nine pieces (only three have appeared in English before), lists all of these genres and more: a mischievous diversity, held together by a uniform but highly ambiguous tone. All miniatures, the longest running to ten pages, the shortest half a page. There are self-involved or circular tales like “The Dressmaker,” in which a young woman goes to bed terrified in her sad, cavernous apartment. Sure enough, Death slides under the blankets with her, and by morning she’s no more: “She lay there dead in her bed.” No surprises, though Walser’s stories often feature seemingly stilled or quietist protagonists, who turn out to be no such thing; in “Farewell,” the last Turkish sultan, Abdul Hamid II, tells us he barely ruled at all, just lay about smoking his pipe. In fact, he has treated his subjects with extreme cruelty: “They smiled when I had them tortured.” A doubt pursues the reader of Walser’s fragments: maybe all of his narrators are unreliable.

On the one hand, he is a writer of pastoral idylls of quite bewitching calm, pitched between medieval dream poem and Romantic interlude. In “The Hermitage,” he writes: “Somewhere in Switzerland, in the mountain region, pinched between rocks and surrounded by a fir forest, is the retreat of a recluse.” Frequently, the writer (or his garrulous stand-in) is the hermit in question, blissed out, as in “Dream Vision,” by an encounter with nature: “Silently, now purely eyes, I sat there and was oblivious of all reality.” Oblivious of all reality—at the moment of rapture, everything slips away or turns sinister. The experience might as easily turn back again, into euphoria. In “The Landscape,” the narrator finds himself beset by sodden grayness, with dark figures lurking in the fog. “Then, right after this, everything, everything was again good, and again I walked with an unutterably joyful spirit into the beautiful, devout darkness.” How are we supposed to read such narrative swerves, when the style remains oddly unaffected, deadpan, almost childish? How much is Walser putting us on?

Not for nothing has he been linked to the most scabrous German satirist of the age, Karl Kraus. At times, Walser’s project in these texts seems to be to elevate pure sarcasm to the highest art. He once wrote: “My vocation, my mission, consists mainly in making every effort to keep my audience believing that I am truly simple.” It seems he played the fool in person too, Robert and his artist brother Karl acting like a literary Harpo and Chico Marx, tossing their hats onto the heads of strangers. At a gathering in Berlin they tried to wrestle the playwright Frank Wedekind, then pursued him to a café shouting “Muttonhead!” There is a kind of slapstick in Walser’s writing too, but it’s more in the pathetic mode of Chaplin, Keaton, or Stan Laurel. Among the funniest, but also most heartbreaking, stories in Little Snow Landscape is “The Sausage,” from 1917. “What am I thinking about? I’m thinking about a sausage,” Walser writes. “I can’t tear myself away from the thought of a sausage that I possessed a moment ago and now is gone forever.” There follows, over two pages, a pedantic, wide-eyed monologue about the meaty morsel in question, the narrator wishing, in every possible permutation of word and phrase, that what he has gobbled could be ungobbled. By the end of his rumination, the story of the sausage has acquired all the mysterious sadness of Kafka’s “The Burrow” or “Josephine the Singer.”

“The Sausage” seems less comical when we consider Walser’s predicament at the time he wrote it: having returned to his home town of Biel, he was reduced to eating in soup kitchens and passing the winter in unheated rooms. In person and on the page, he calls to mind the garret-bound scribes and dreamers in certain tales by Gogol, Dostoevsky, or Melville. But also their cosmopolitan, twentieth-century descendants, such as Benjamin, or Joseph Roth: visionary freelancers trying and slowly failing to insinuate their startling voices into the feuilleton pages of European newspapers. As the philosopher Giorgio Agamben has pointed out, Walser’s characters often seem to be laboring at some project, a work “that is utterly superfluous, not to say indescribable.” His scale was restricted, like his life, but his productivity was amazing. Whalen tells us that the German edition of Walser’s complete works contains 3,700 pages of short prose, less than a third of which was published in his books during his lifetime. Little Snow Landscape brings a modest but essential fraction of that work to light in English, and doesn’t at all feel orphaned from the corpus—Whalen having entertained, he says, “the not necessarily peculiar notion of the book as, however apparently plotless, a kind of novel.”