On thinning ice: an environmental anti-memorial in Sweden. 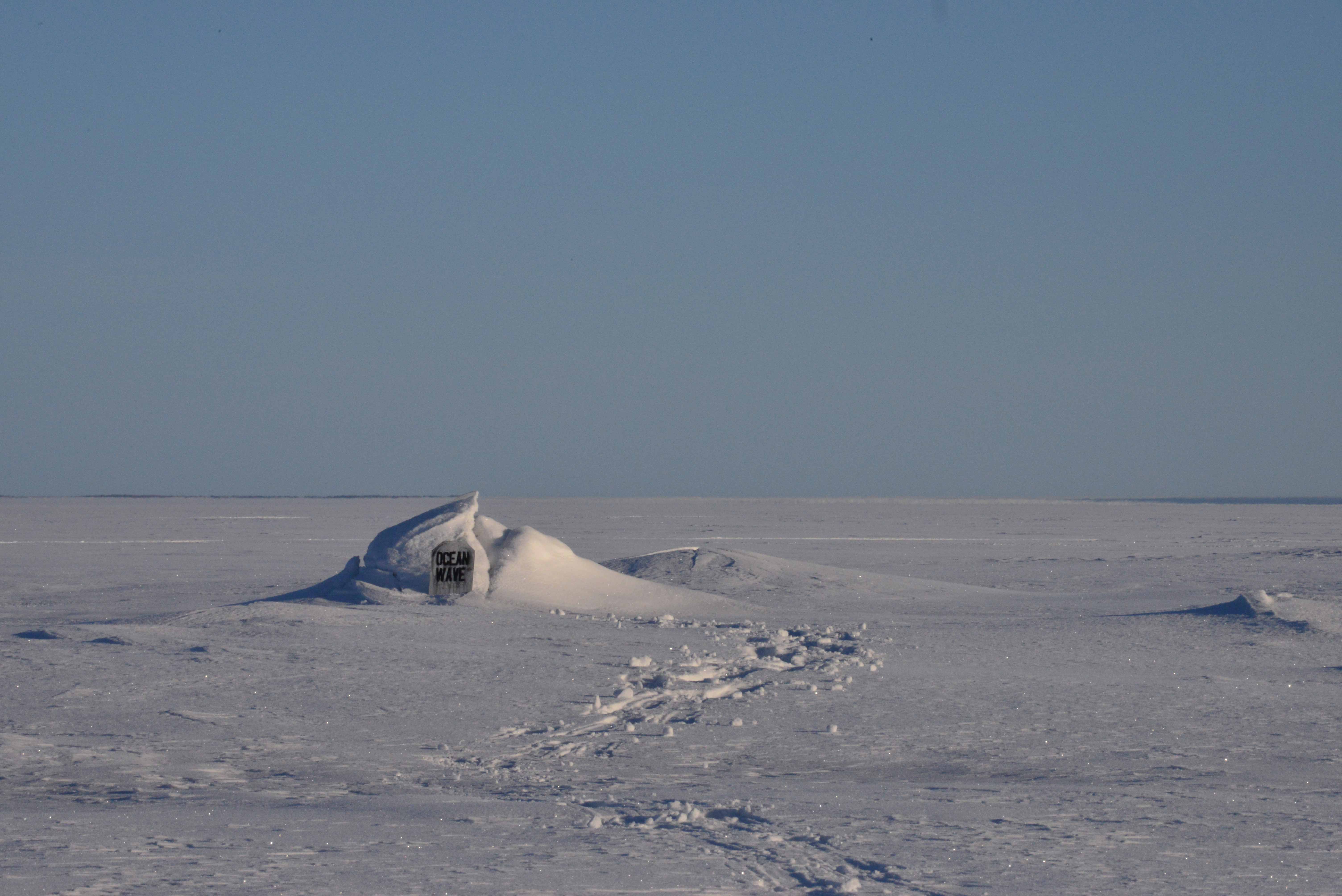 Goodbye, World, curated by Andreas Templin and Raimar Stange, apexart international exhibition located on an ice floe in the Bay of Bothnia, Swedish Lapland (and online here), on view until the ice melts

How do you mourn a glacier?

The hyperobject of environmental disaster has cleft into our world’s emotional surface a gorge of directionless sadness and fear, in which many of us find ourselves shuddering. Ecological grief is a common term for this state, but geologists and ecologists, who are highly susceptible to it, have been compiling a manic thesaurus of diagnoses: ecological anxiety disorder, anthrophobia (fear of humans), autophobia (fear of self), societal death anxiety. This collective regret and dread manifests itself in many ways, one of which is the organizing of ongoing Earth-death rituals, like funeral ceremonies and memorials for deceased glaciers (such as for Iceland’s Okjökull, which was declared dead in 2014 at the age of seven hundred).

Among these memorial impulses we might count the new exhibition Goodbye, World, though maybe it’s really more like an anti-memorial, because it was designed not to extend into the future to remind and instruct the coming generations about the loss of our world (that is, if there are going to be generations to come), but to disappear in the present. Goodbye, World consists of ten artworks (some specifically selected by the curators, some “carte blanche” commissions, and all designed to be “eco-friendly”) that respond to the theme of environmental catastrophe. Once assembled, the pieces were placed in a circular formation on a sheet of ice in Swedish Lapland’s Bay of Bothnia, just at the fringes of the arctic circle. The exhibition was installed in early February 2021, at the height of arctic winter, when the ice is as strong as earth. But arctic spring will begin in mid-March; by April the ice will tremble itself out of permanence and start to split, and its ice calves will inevitably melt and the artworks sink into the sea. The project was organized to mark our existential, oceanic loss, and plans to add itself to that lossy ocean, like a temporary autophagic remembrance that will end up forgotten in our vanishing future. (“The arctic used to be the end of the world,” Icelandic author Sjón has said. “Now it’s disappearing, and maybe the world will end with it.”) 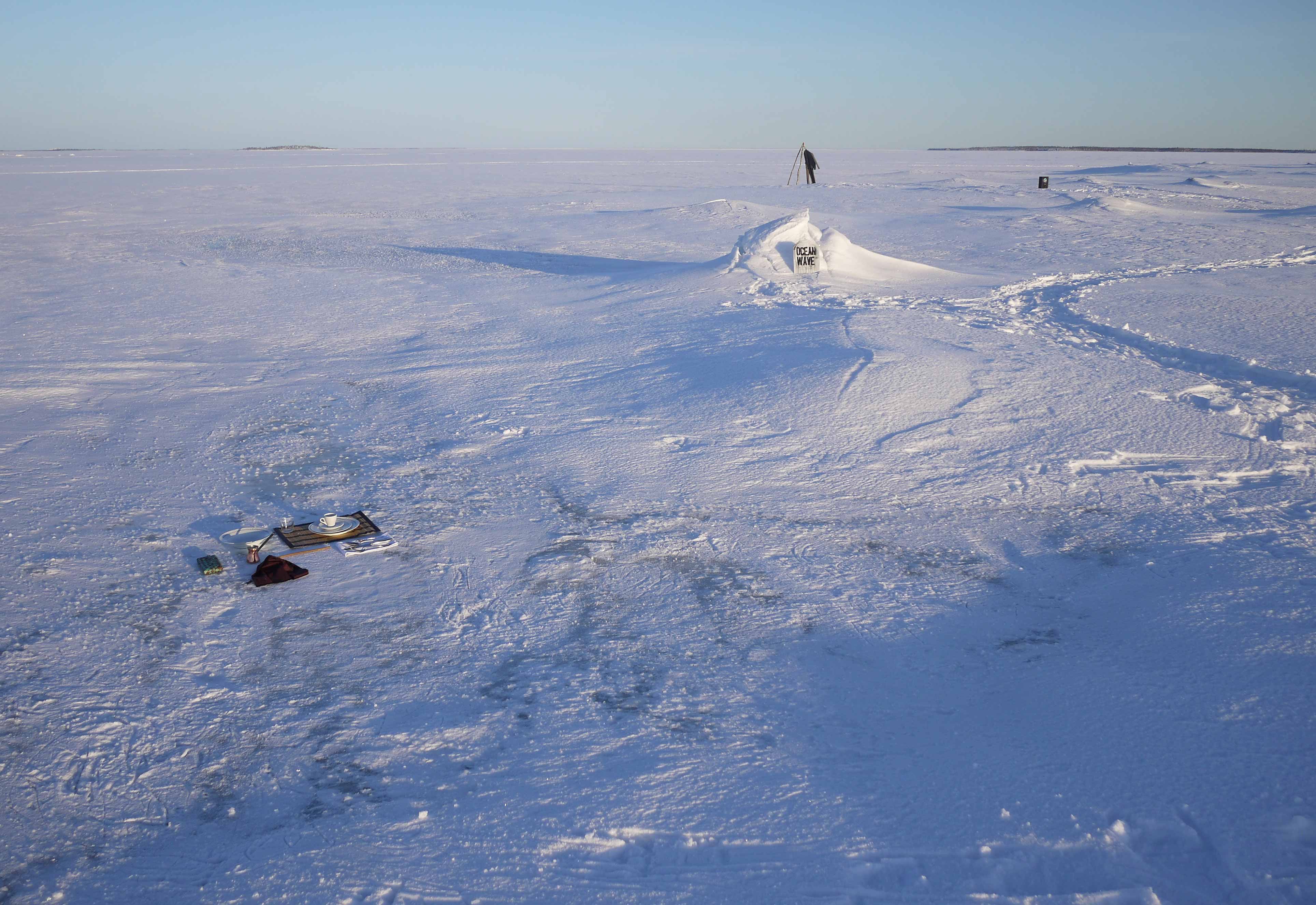 Goodbye, World was conceived by Berlin-based curators Andreas Templin and Raimar Stange in pre-pandemic times, but it is accidentally the perfect pandemic exhibition, combining our housebound yearning for travel with the necessity of virtuality. The show “opened” on Saturday, February 13, in a Zoom ceremony, during which the curators shared video footage of the installation process (in which they mushed a team of beaming huskies across the ice floe, carrying the wrapped-up artworks in a sled behind them) and narrated a video tour. (An aerial view from a drone had been promised, but the temperatures had dropped so low that the drone refused to work.) 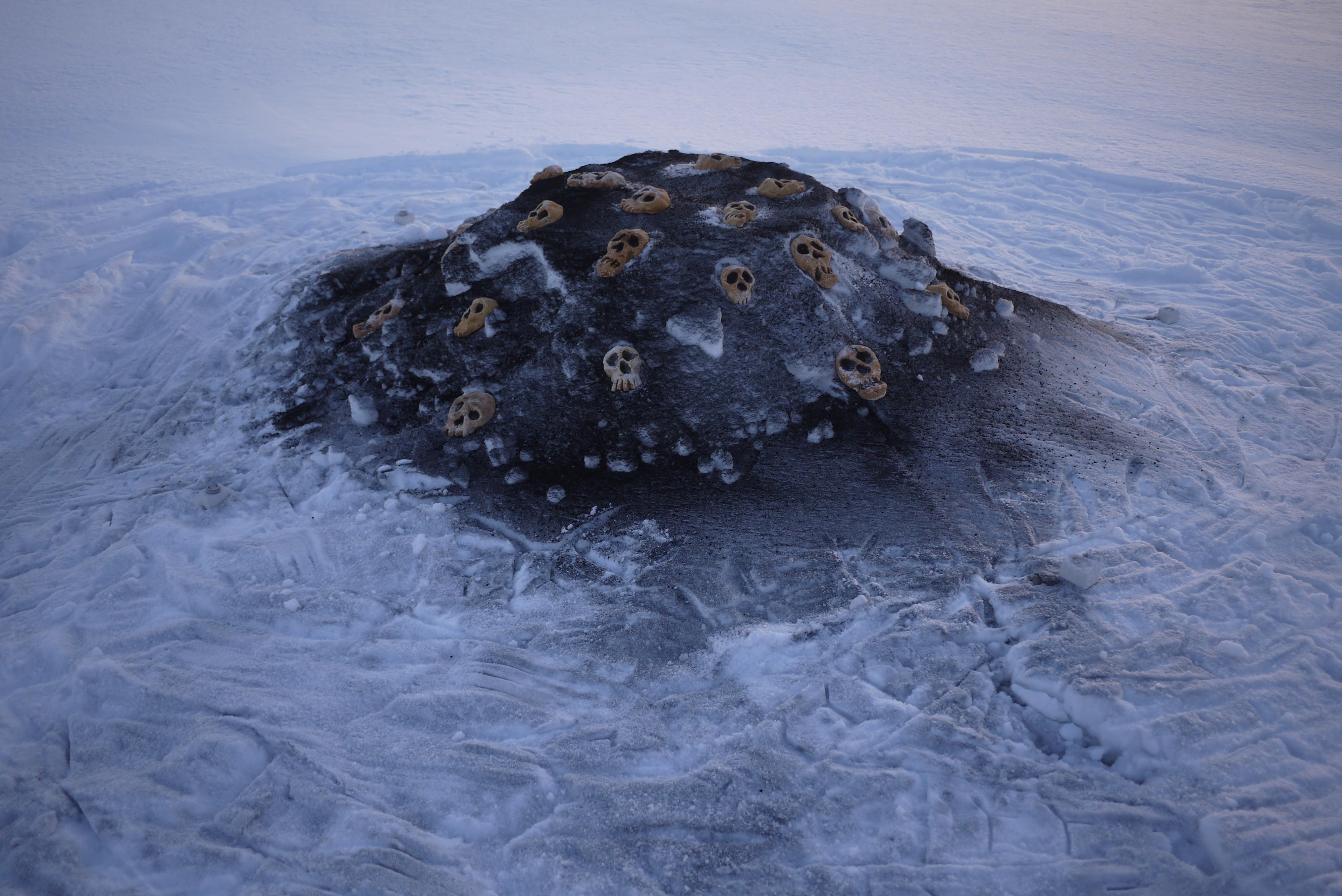 The story of creating this exhibition and the resulting images of this magnificent frozen world, the spine-tingling sublimity of its vast bleached expanse, which so few people will ever get to see, are all so spectacular, it’s perhaps inevitable that they would overshadow the artworks themselves. Some of them are wholeheartedly forthright interpretations of the theme. For instance, Montreal-born, Berlin-based artist Nika Fontaine offered a mound of active charcoal, like an extinguished funeral pyre, studded with cartoonish human skulls formed out of bread, with smoke wafting from burning frankincense. “It is only fair of you [Earth] to put an end to our selfishness . . . I welcome your wrath as an act of self-care and preservation,” Fontaine writes in an accompanying letter. There’s also Berlin-based Veit Schütz’s Aggregat Weltenbrand (Aggregate World in Flames) (2017), an old-fashioned, lacquered wooden radio equipped with a glowing 3D print of the planet Earth. In the original iteration of the artwork, the viewer could depress a red button to ignite a series of explosions across the miniature world. (A GIF on the exhibition website shows what this looks like, but the actual work installed on the ice floe is an “environmentally friendly” copy, sans electronics.) 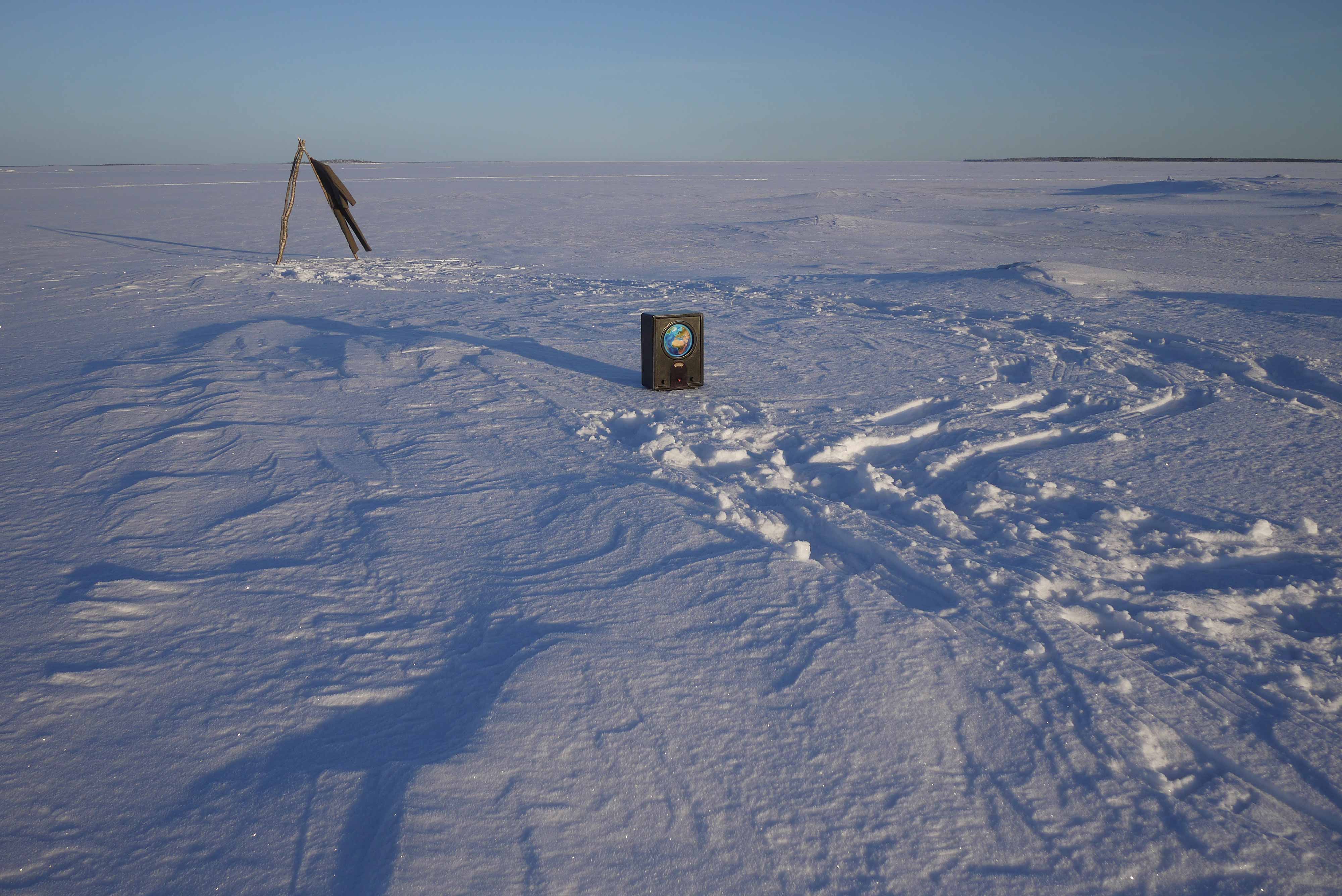 The more absurd, puzzling contributions also looked a little forlorn against the brilliant snow. French-Indian artist Nadira Husain’s Scrupulous (2020) is a clay turtle, of the commercial garden-gnome variety, that has been painted in periwinkle acrylic. In Hinduism, the turtle is an incarnation of the god Vishnu, who is charged with guarding creation; but Scrupulous is also, somewhat inexplicably, a nod to The Smurfs, Husain says. And Athens-based artist-collector Peter Niemann sent to the arctic Joseph Beuys’s legendary felt suit, slightly altered with the addition of a Marlboro patch to the jacket pocket; against a heavy purple sky, the empty suit drifts listlessly and inscrutably from the apex of a stick pyramid. 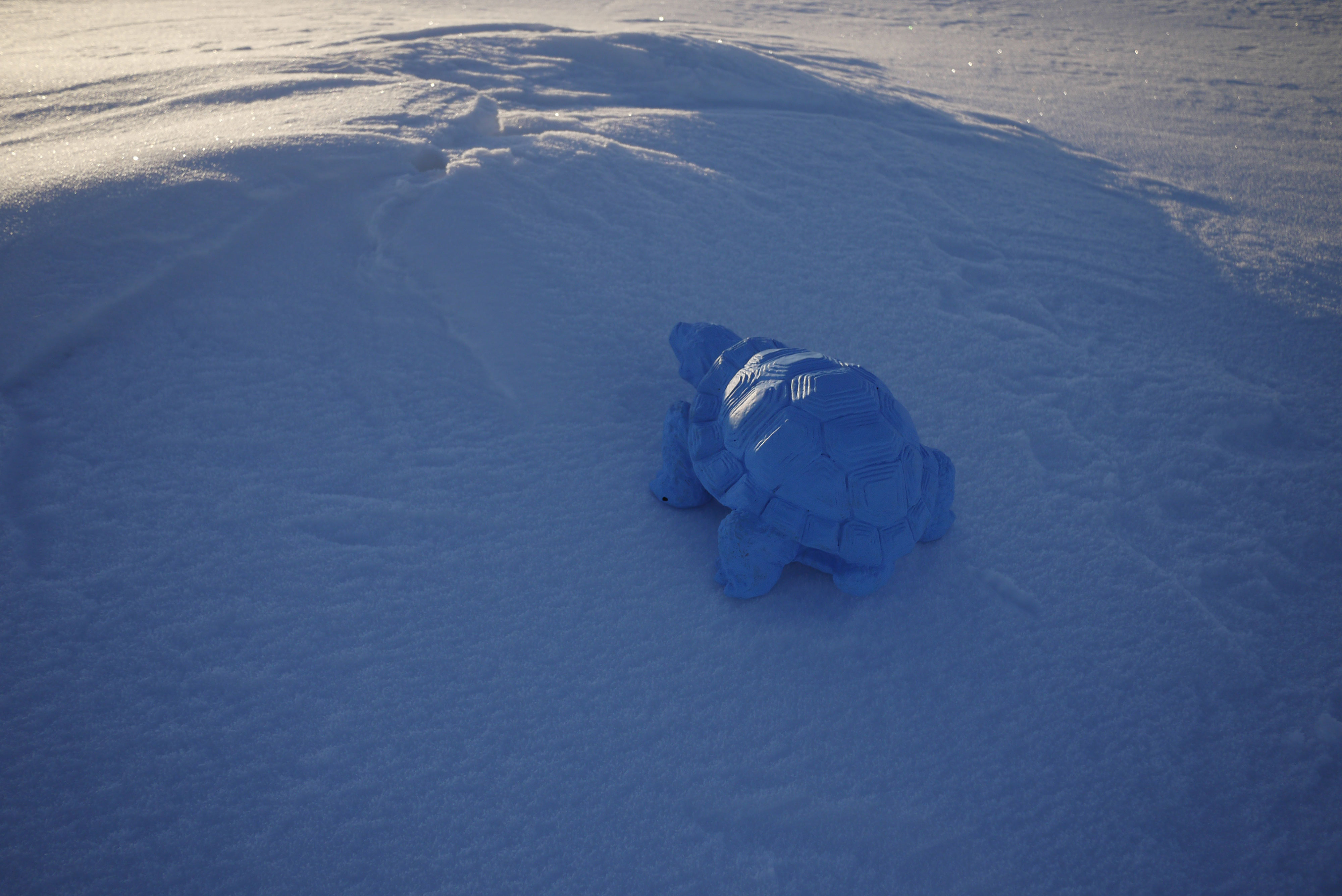 The ancillary feeling of some of these works might be because of their extreme distance from the viewer (I looked at them from my living room in Queens, some 4,000 miles away from the Bay of Bothnia). But it might also be because Goodbye, World seems to function more as a conceptual critical-curatorial gesture, where the administration and logistics of making the show and the rigorous discursive apparatus built around it are just as essential to the project’s meaning, or perhaps even more so, than the collected artworks. They are, after all, destined soon to become ice trash sinking to the bottom of an ailing Baltic Sea; more important, maybe, is the curators’ provocation to an audience they seem to consider too complacent.

In his challenging exhibition essay, Stange, who has for years been writing on environmental catastrophe and organizing exhibitions about it, indicts the art industries for not adequately tackling climate change. He says this is partly due to a bourgeois predilection for disinterested aestheticism, and a correlated dislike of “instrumentalized” art that agitates. But it is also because institutions are too preoccupied with “comparatively manageable” (and marketable, he suggests) sociopolitical issues like feminism, postcolonialism, and “identity politics.” It seems to me somewhat alarming to silo these areas of study, or to say one comes at the cost of another. Climate change is fully a racist and (post)colonial and feminist problem, and those “social-theoretical agendas” that Range finds less urgent can in fact help us to imagine the awesomely different way of being in the world that would be required to mitigate the progressive climate disaster. Some of the most compelling “climate change art,” to me, is art that understands this intersectionality and fluidly operates through those overlapping levels of inquiry, such as in works by Thao Nguyen Phan and Sofía Córdova. 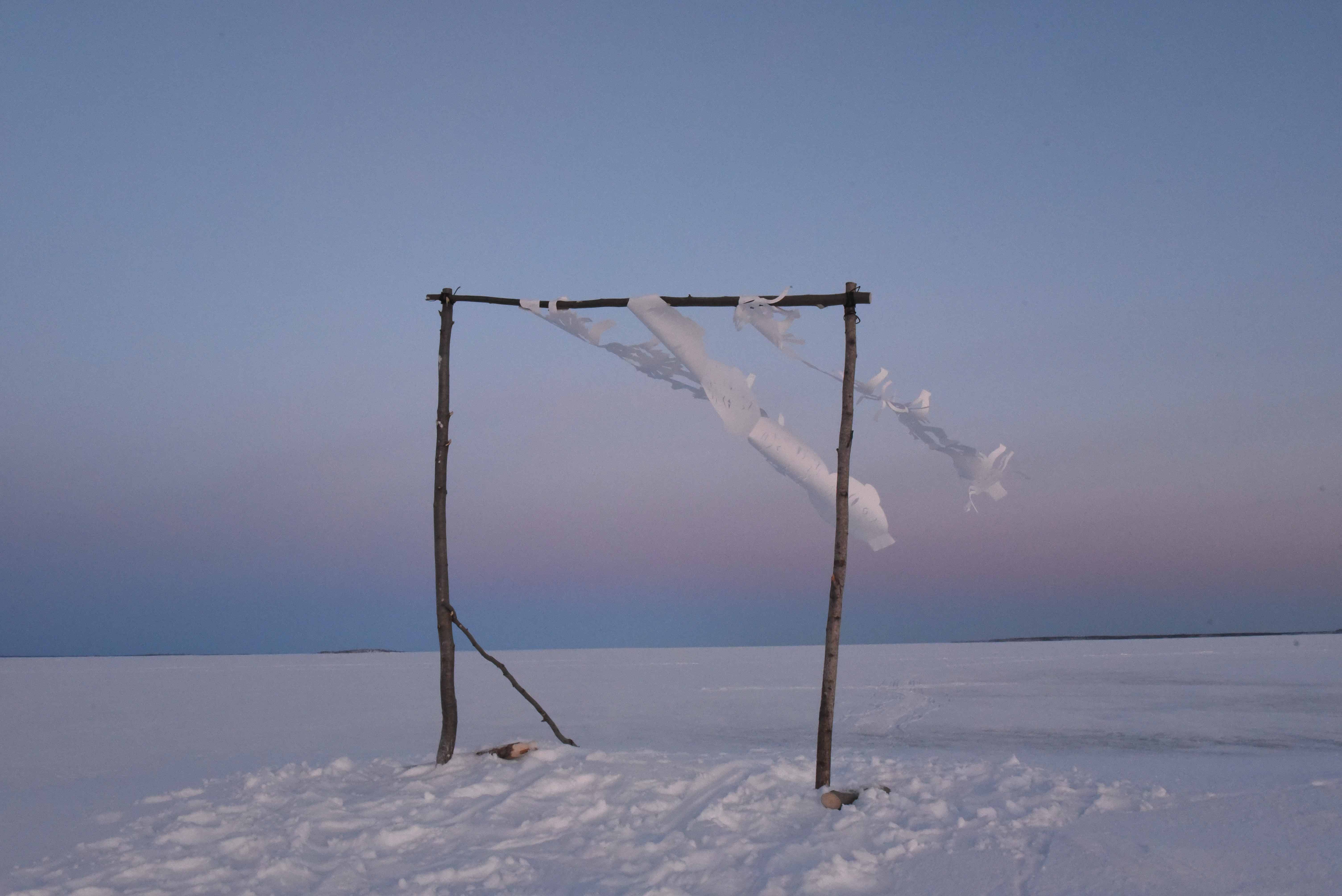 If I was mostly missing that multidimensionality in Goodbye, World, there is also something beautiful on the ice floe: the piece that both opens and ends this circular itinerary, Peruvian artist Eliana Otta’s Vicarious fragile pilgrims (2020), a delicate structure, a humble gate fashioned from attenuated tree limbs, from which three long white strips of paper dolls flutter, in celebration, or in elegiac lament. The work pays reverence to the annual, syncretic Qoyllur R’iti pilgrimage, when the Indigenous peoples of the Andean highlands head to the local, sacred Ausangate glacier to celebrate, among other things, the appearance of the Pleiades constellation in the southern night skies, and to ceremoniously harvest glittering bits of the glacier’s divine, “life-giving” frozen crystals. The pilgrimage and attendant festival were canceled in 2020 due to COVID, but have also been increasingly restricted in recent years due to Ausangate’s rapid melt. In an audio statement posted in Spanish on the online exhibition, Otta says she wanted the paper dolls to act as avatars for the pilgrims, to let them finally reach the ice. The curators reckon this will be the first of the artworks on the floe to disappear.

How do you mourn an artwork?