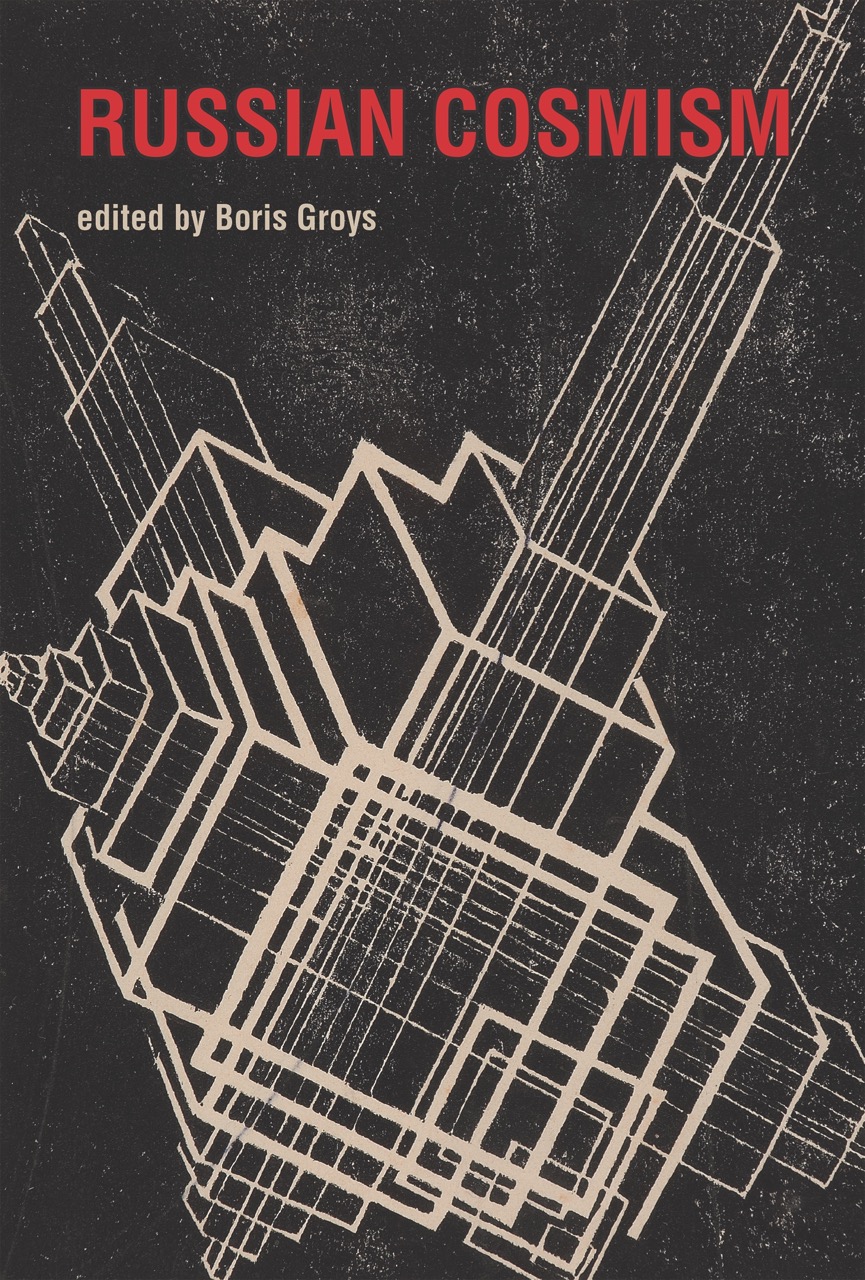 In the decades before the October Revolution of 1917, a confusing array of radical philosophies flourished in Russia: more or less materialist, utopian, mystical, or Marxist. Out of the perplex of anarchism, Bolshevism, futurism, and more, it’s possible to extract a lineage of Cosmism, founded on ideas propounded by Orthodox Christian philosopher Nikolai Fedorov in the mid- to late-nineteenth century. Though he published little, Fedorov was profoundly influential: Tolstoy attended his lectures, and later followers included Maxim Gorky and Boris Pasternak. Post-revolutionary intellectuals stripped the religious element from Fedorov’s thought, but retained some of his wilder notions. Death was not natural to humans, but rather a flaw in our design, to be overcome. With the advent of new technologies the Earth would become “a great electric boat” whose heavenly course humans determined. Artists, writers, composers, architects, and filmmakers: all responded to the Cosmists’ vision of psychic, bodily, and environmental innovation. But the movement itself was short-lived: many Cosmists were supporters of Trotsky, and suffered accordingly under Lenin and Stalin.

Russian Cosmism, edited by the art theorist Boris Groys, collects thirteen extracts from Cosmist writings, mostly of the 1920s, and argues for their contemporary relevance to art (the contemporary museum) and politics (the “biopolitical” power of the state, its ability to shape lives and landscapes). Consider for example the environmental futurism of Konstantin Tsiolkovsky, who in “The Future of Earth and Mankind” imagines deserts and tropical regions put to agricultural use. A vast army of workers would traverse such territories, while above them a protective metal net was erected. This mesh would advance with the workers, and behind it new dwellings could be built: houses enclosing atmospheres so delicately controlled that people no longer needed to wear clothes. Solar panels might be attached to these buildings, which would be made of special materials that collected water during the cold desert night. The oceans, meanwhile, might be covered with huge floating greenhouses, usefully impeding the evaporation of seawater.

Such details capture the odd mix of airy whimsy and practical prescience at work in Cosmist thought. Alexander Chizhevsky made what may seem a compelling study of the phases and cycles of political revolutions; but he did it in order to assert—“prove” is not the word—that such developments were governed by the activity of sunspots. (Oddly, he also admits “the absence of any real connection.”) With his charts and his numbered epochs, Chizhevsky establishes a certain laborious tone among the Cosmists: a degree of earnest detailing that is probably endemic to utopian writing. It’s present too in the ways these writers distinguish themselves from their intellectual contemporaries. The chief difference between Marxism and Cosmism is that the former can conceive of emancipation only for the living. Not only is death the enemy of human reason for a Cosmist thinker such as Alexander Svyatogor, but its victories to date must also be reversed, in a universal orgy of resurrection. Immortality was the ultimate aim, pursued by Alexander Bogdanov in blood transfusions from the young to the old. Bogdanov, a prominent Bolshevik and founder of the Institute for Blood Transfusion in Moscow, died in 1928 when he exchanged blood with a sick university student—she survived.

Fedorov the founder aside, the best known of the Cosmists is probably Tsiolkovsky, who can plausibly be said to have inspired or even begun the Soviet space program. (His “rocket equation” of 1903 established the basic physics of such devices or vehicles.) As early as the 1880s, he was proposing liquid-fueled rockets capable of leaving the Earth’s atmosphere, stationary satellites, and space stations that would mark the beginning of humankind’s colonization of the solar system. The reclusive Tsiolkovsky had the most far-reaching ambitions, practically and metaphysically. He believed that all things were connected, and all of them sentient: “All matter is alive at its core.” For humans to take up residence elsewhere in the cosmos was simply to acknowledge that we belong there. At the same time, the Cosmists attached special significance to certain bodies in the night sky: Mars was considered a revolutionary planet, which is also how it appears in a Soviet sci-fi film of 1924, Aelita: Queen of Mars.

Some of the writings in Russian Cosmism tend deliberately toward science fiction. Bogdanov’s “Immortality Day” concerns a scientific genius named Fride who has enabled humans, including himself, to live for over a thousand years. Fride eventually commits suicide, because “eternal life is unbearable torture,” but the Cosmists were for the most part optimistic about immortality. In his introduction, Groys argues that Immortalism is analogous with the logic of the museum, which is “a machine for making things last.” It’s conventional to say that the artistic avant-gardes of the early twentieth century (including the great movements in Russia) wished to collapse the distinction between life and art. For Groys, Cosmism wants instead to corral and protect life: fully achieved, it would mean “a radical museumification of life.” In this sense, Russian Cosmism extends an argument Groys has been making for years, and notably in his 2008 book Art Power: that the contemporary museum may, surprisingly, be the most transformative place for art and artists today—a utopian space away from the art market, in which any and all experiments will be tolerated and will find a public.

But doesn’t this sound like a reductive or at least oblique reading of the fantastical ideas and ambitions in Cosmist writings? The more pressing contemporary reference point, ignored by Groys, is surely the transhumanist movement currently being bankrolled by tech billionaires—up to and including Bogdanov-style blood transfusions. PayPal cofounder Peter Thiel and Google’s head of engineering Ray Kurzweil are among the true believers: the latter claims that if he lives to 120 he will likely live forever. (Mark O’Connell’s 2017 book To Be a Machine brilliantly describes the variously crackpot efforts of contemporary Immortalists.) So much of what the Cosmists hoped for is now the stuff not of revolutionary desire but of CEO-sponsored hubris and kitsch. Russian Cosmism is a fascinating volume that makes its subject more widely available in English, but it’s framed in such a way as to scant the most obvious question—how did such visionary dreams and ideas travel from the philosophical salons of nineteenth-century Moscow to the mental rumpus rooms of Silicon Valley?

Brian Dillon’s Essayism: On Form, Feeling, and Nonfiction will be published in September by New York Review Books. He is UK editor of Cabinet magazine, and teaches writing at the Royal College of Art, London.