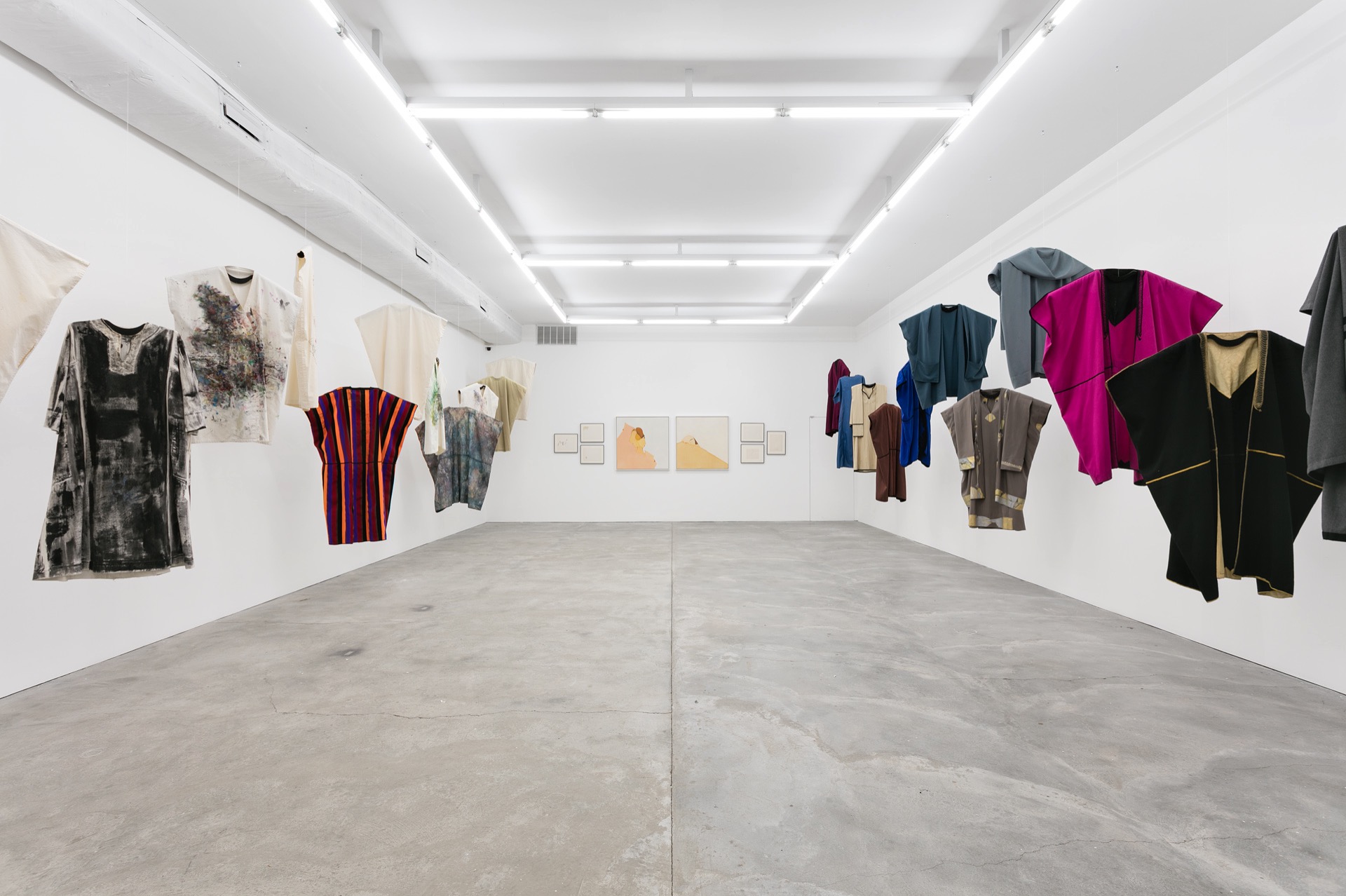 It’s generally wise to take curatorial fads with a grain of salt, but the current predilection for “undiscovered” older women artists has given US audiences necessary exposure to some astonishing work. Alma Thomas, Beverly Buchanan, Carmen Herrera, and Geta Brătescu are among those to recently attain their rightful status as art-world luminaries; the eighty-seven-year-old Huguette Caland will hopefully be another.

Caland is still under-known in the West (even though she lived in the US for nearly two decades—mostly in LA—before moving back to her native Beirut in 2013), but buzz has been percolating around the artist for a few years now: she had solo shows in New York at Lombard Fried and Nathalie Karg in 2014 and 2016; she was a standout in the 2016 Made in LA exhibition at the Hammer; twenty-three of her works hung in last year’s Venice Biennial; she’s the subject of the monograph, Everything Takes the Shape of a Person (2017).

The artist now has an exhibition at the newly opened Institute of Arab and Islamic Art (IAIA). It’s a small show (I’m not sure there’s enough work on view to really constitute the “survey” it’s billed to be) in a small, one-room space, but it speaks volumes to the enigmatic power of Caland’s art. A particularly laudable virtue of this latest presentation of her work is that it refuses the click-baity urge to foreground certain features that make Caland particularly enticing to a Western audience.

And enticing, she is—reviewers (including this one) can’t resist alluding to the more salacious details of her biography. Born in Beirut in 1931, the daughter of a liberated Lebanon’s first president, Caland was raised with certain obvious societal expectations, and fulfilled them for a number of years. But she jumped ship at age thirty-nine and left a husband and three children behind to start over again in Paris. Her lovers were legion, her work breezily erotic (critics most often compare her early paintings to Niki de Saint Phalle and Georgia O’Keeffe). In addition to making art, after her move to France she designed over a hundred kaftans for Pierre Cardin—one of the most famous flaunts tits and bush on the front, half-moon curves of ass cheeks on the back.

For a Western audience, the titillation of an Arab woman escaping a normative domestic role and wholeheartedly embracing her sexuality is one born of tired, limiting stereotypes. Nixing works like the naughty kaftan, IAIA took the risk of eschewing that titillation, focusing instead on Caland’s more formal preoccupations: specifically, her career-long obsession with line. While some US observers might skeptically wonder if the move to elide the sexier content is informed by IAIA’s own cultural identity, I would emphatically disagree. In fact, it’s a relief that the institution is allowing the art to make its mark free from the burden of the overdetermined framework of the “taboo-breaking” lady artist. 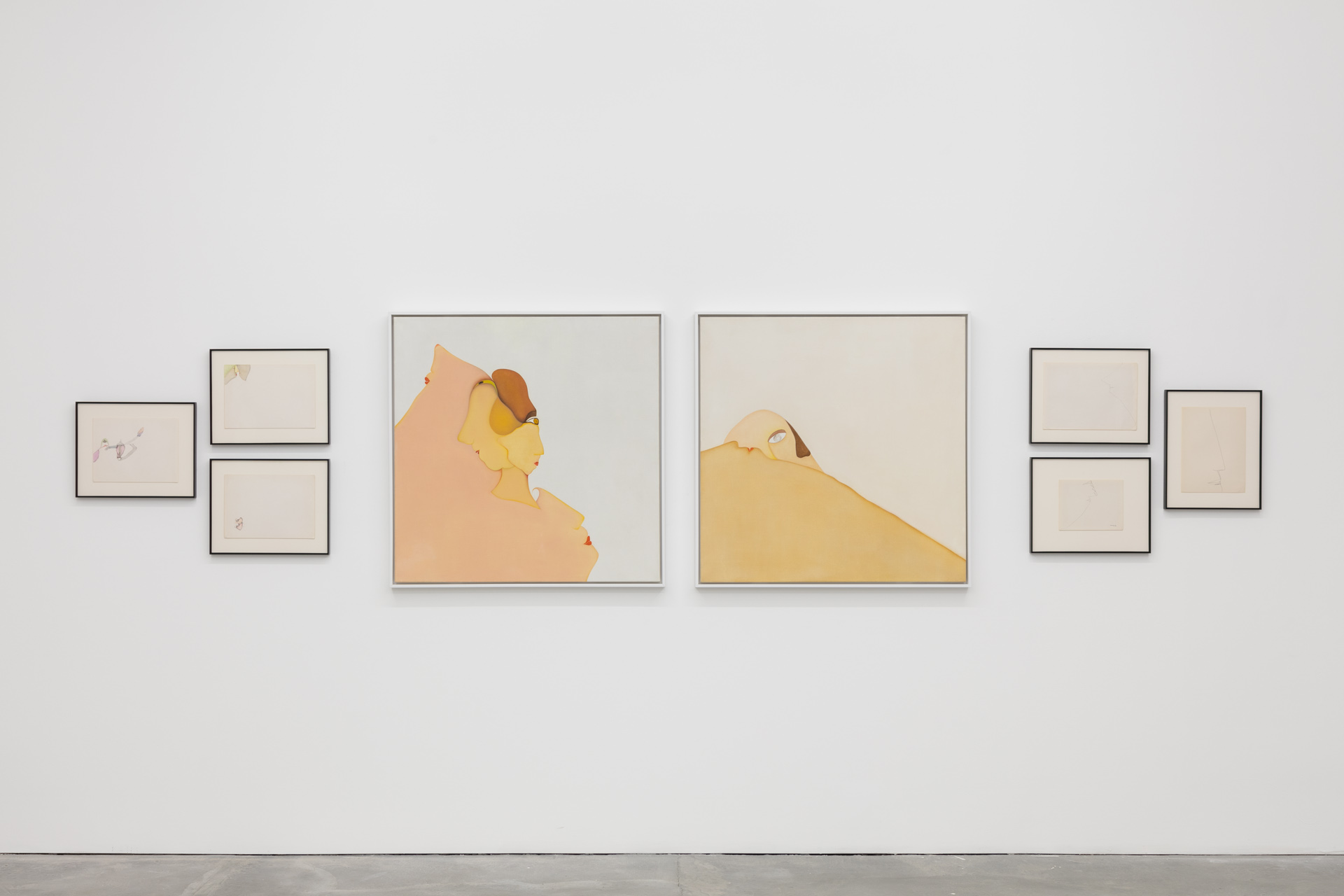 The show includes a succinctly edited suite of line drawings, oil paintings, and garments, all dating from 1964 to 2013. The two medium-sized paintings centered on the gallery’s far wall are paradigmatic of Caland’s earlier work from the 1960s and 1970s: sinuous lines give shape to drifts of pale, sherbet colors (here, peaches and creams); faces bubble out of amorphous forms that might suggest more intimate body parts. In Sunrise (1973), a quarter of a face peeks up behind a breast-like mound crested with the most briefly delineated suggestion of nose and lips. In Eux (c. 1975), a whipped mass of flesh-like pink ripples into surreal suggestions of mouths, eyes, and chins. Accompanying ink drawings from 1972 (all untitled) share that same lithe, economical, sometimes trembling line, which either wavers all the way across the page or wanders around in a single corner to create strange, whimsical visages. 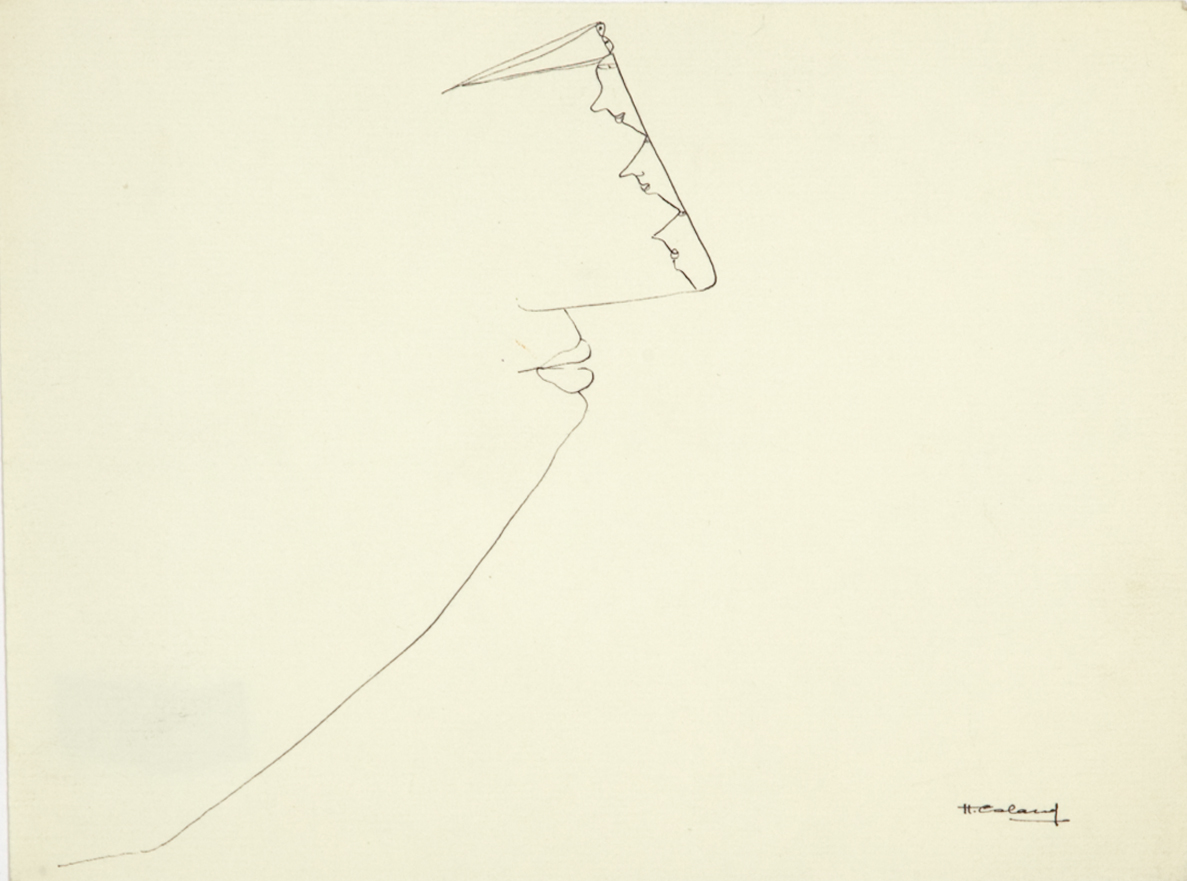 Whimsical as the drawings might be, they are not unserious, and a certain fraught complexity develops in the geometric abstractions on the opposite wall (the bulk from 2001, with a scattered few ranging from 1967–99). Here, the formal constraint of the line starts to feel a little more, well, constraining—Caland’s marks become tight, tiny, and compulsive. Densely woven grids that seem to be straining to reach geometric precision are inevitably deflated by the wobbly, organic nature of the hand; concentrated periods of bleeding ink punctuate where the artist pressed her pen down on the page or lifted it off. The cramped, hatched grids sometimes cohere into strange forms that seem to want to be recognized (is that the tip of a pencil? The head of a penis?), but ultimately remain unidentifiable. 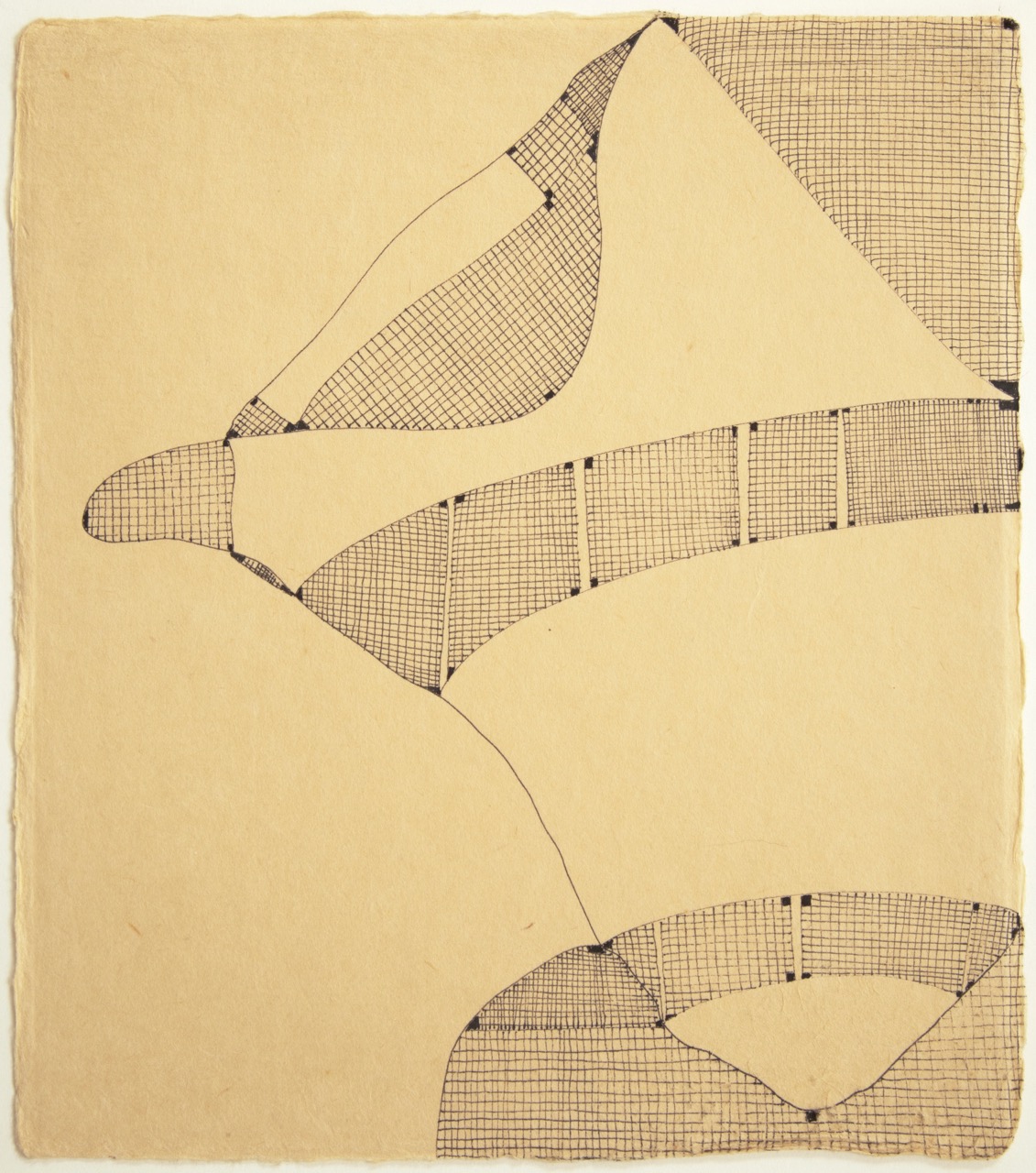 Some of those mischievous lines make their way onto the fabric smocks hung from the ceiling along the adjacent wall (most dating 1980/2013), revealing how closely related these two practices were for the artist. The large, boxy smocks are sometimes smeared with thick smudges of paint, or covered with scrubby fields of black, with doodle-like drawings hiding here or there. Across the gallery, a second series of more unassuming, mostly monochromatic kaftans (1970s–90s) feature striking piping in contrasting colors. All of these dresses are beautiful, but none of them in the way we might typically think of flattering clothes that would define a woman’s form. Throughout her practice, Caland certainly trafficked in bodies and beauty, but never in obvious ways (and that extended to her own body—she once decided to gain weight just to see what it would feel like, and didn’t stop until she was over two hundred pounds). 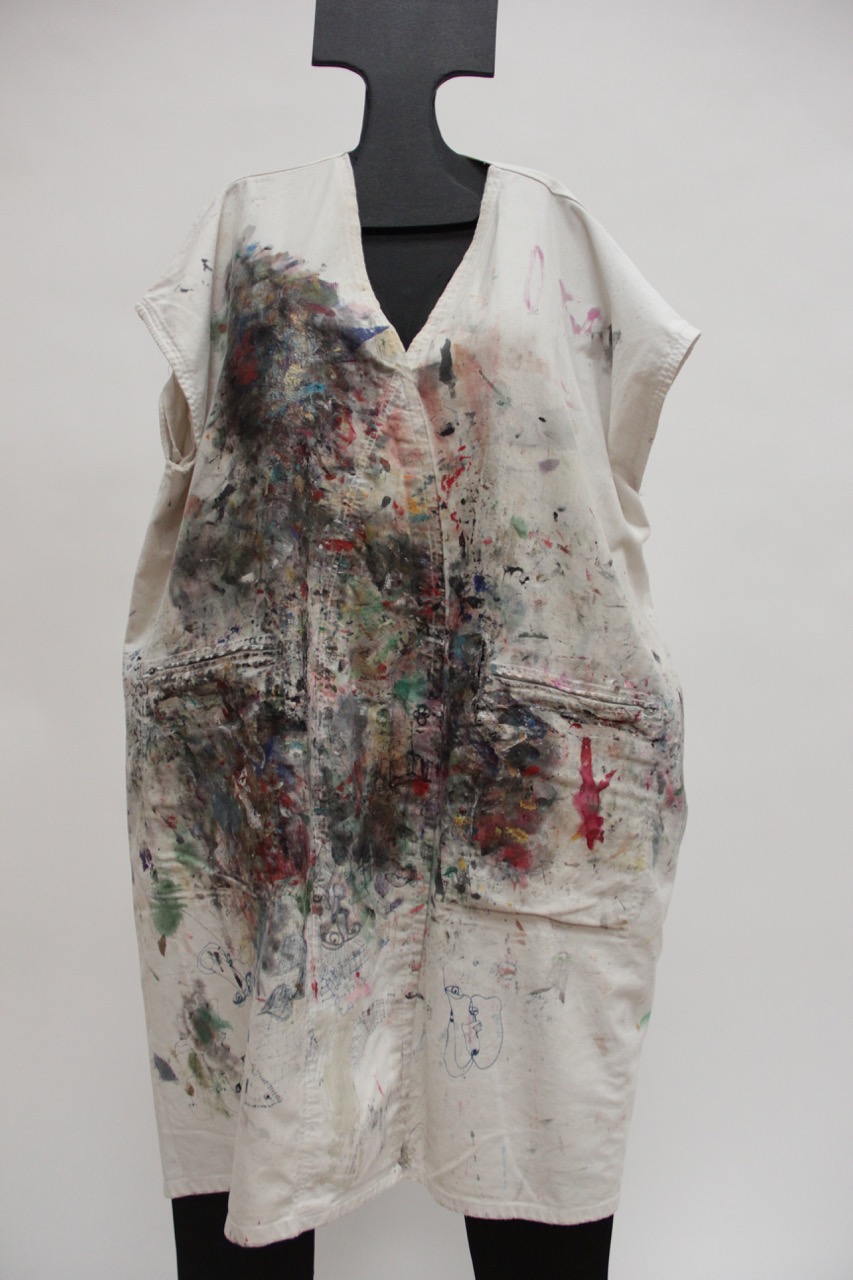 It might be modest in scope, but the IAIA show is a rousing entrée into Caland’s peculiar universe. It’s not exciting because of who she was—an independent, successful Arab woman. (Caland is hardly an exotic animal in that regard; she was part of a generation of pioneering women shaping the scene in mid-century Lebanon, including fellow painter Yvette Achkar and the artist, critic, and curator Helen Khal.) And it’s not exciting because of her singularly engrossing biography. Caland’s joyous, idiosyncratic explorations of sex and body expand beyond her life into the work itself; and this thrilling work stands firmly on its own.