Nonfiction
Theory of the Gimmick

From under-seat buzzers to Immanuel Kant: Sianne Ngai on a miniature model of capital. 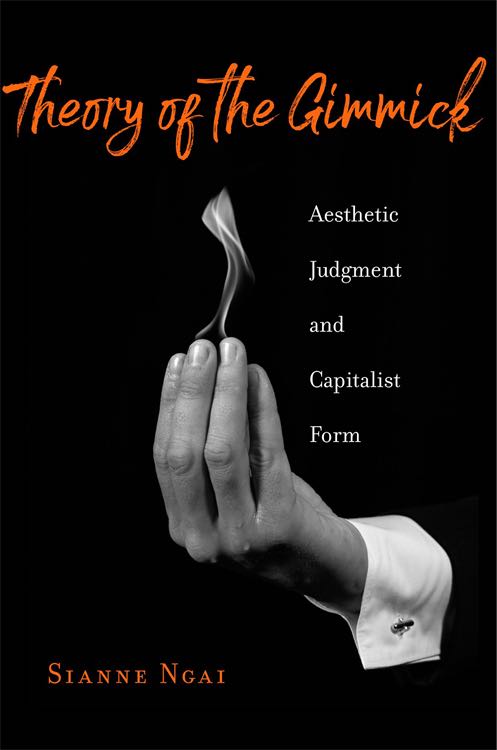 In Theory of the Gimmick, the critic and cultural theorist Sianne Ngai examines a phenomenon most of us embrace and disavow in the same breath. For example, I’m writing my first draft of this review with a Parker 51 fountain pen, made about sixty years ago. It was the iPhone of its era, luxe but ubiquitous, aggressively marketed for its innovations: it doesn’t leak, or dry up quickly, and it’s built of Lucite, unscratched to this day. Because I’m a sucker for tricks, tips, or hacks (gimmicky word) that will keep me off a computer and away from the internet while writing, I’m content to double my labor in the hope of saving my attention span. Of course, it’s all a delusion, a fetish, a gimmick—a retro one now instead of futuristic. I take a dim view of my own expensive, pretentious devotion to the correct writing tool, but I’m not about to give it up. Writer conjures the scene of writing in his opening paragraph: this too is a gimmick. (As is saying “It was the iPhone of its era.”)

The gimmick contradicts itself, and so do the judgments we attach to it. It is both “irritating” and “strangely attractive,” says Ngai, a professor of English at the University of Chicago whose previous books are Ugly Feelings (2005) and Our Aesthetic Categories (2012). Ngai is a keen analyst of overlooked or denigrated categories in art and life: the interesting, the zany, the cute, and the paradoxical combination of amazement and boredom that she names “stuplimity.” The word “gimmick” may point to and judge “a catchy hook, a timeworn joke, a labor-saving contraption.” But Ngai is more concerned with the way her central term functions than with the mundane objects or inflated events it frequently describes: Google Glass, the disastrous Fyre Festival, under-seat buzzers installed in theaters for 1959 horror movie The Tingler, the paragon of 1970s culinary “convenience” that is Hamburger Helper. Theory of the Gimmick is a book that moves quickly from the fantastical contraptions of Rube Goldberg to the philosophical machinery in Kant or Marx that might explain their appeal.

“Gimmick” has sometimes been used neutrally to denote a small useful object or tool. (Related terms: thingamabob, doodad, whatchamacallit, and doohickey.) The word itself appears in print for the first time in the late 1920s. At the end of that decade it is defined as a “device used for making a fair game crooked.” In 1936 a fanciful etymology claimed that “gimac . . . is an anagram of the word magic”—but the more plausible derivation is from “gimcrack,” meaning cheap and shoddy. Except, Ngai argues, the gimmick seems both suspiciously cheap and absurdly expensive—it’s the result, or the object, of too much effort and not enough. Gimmicks perform to excess, and underperform: consequently, we love and hate them at the same time.

Hence the “capitalist form” in Ngai’s subtitle. The gimmick is a miniature model of capital itself: it seems to condense a lot of labor and risk into the wondrous promise of easy returns. Its epitome is the financial “product” that seems too good to be true, and is at the same time irresistible. Ngai finds a parable of the capitalist gimmick’s workings in Robert Louis Stevenson’s 1891 short story “The Bottle Imp,” published a year after the collapse of Barings Bank in London, which caused a global recession. The gimmick of Stevenson’s title grants whatever its owner desires, on the proviso the bottle be sold at a loss, or that person will burn in hell. The bottle imp was once worth millions, but it pitches later owners into a vortex of anxiety: How to sell the world for a pittance? This predicament is inescapable. “You Gotta Get a Gimmick,” sings a trio of strippers in the 1959 musical Gypsy—but the logic of the gimmick means even the fanciest moves and cutest props will yield diminishing returns.

Matters are more ambiguous in art and literature. The accusation of gimmickry is especially familiar in the history of avant-garde and experimental culture. James Joyce’s stream of consciousness, Marcel Duchamp’s readymades, the silence of John Cage’s 4’33”—these were all in their time dismissed as gimmicks. Which means what, exactly? That these techniques or formal choices are both exacting and frivolous, pretentious and vulgar, self-evidently some sort of put-on. Usually, the gimmick is something we accuse other people of falling for, while we refuse to be taken in. But in the case of modern and contemporary art, we’re dealing with what you might call the authentic gimmick. In the photography of Torbjørn Rødland and the video installations of Stan Douglas, Ngai finds a contemporary art that is quite as aware as Duchamp was that the gimmick is another aesthetic choice, albeit one that raises flummoxing questions about what art is and how to judge it.

Theory of the Gimmick ends with Ngai’s smart and sensitive readings of the late fiction of Henry James, where similar-seeming plots are confected around persons of uncertain employment status: tutors, governesses, companions, and carers. The characters are gimmicks, and so are the elaborate metaphors James uses to describe their lives: in The Sacred Fount (1901), there’s an awful lot of vampiric tapping, extracting and feeding off one another. James had even hit on gimmicky ways of writing, relying for the first time on the typewriter and on a secretary to whom he dictated his sinuous prose. Ngai is very good at this level of engagement, and one might have wished for more detailed analysis—of literature, but also of popular music, or everyday objects—and fewer pages of post-Marxist abstraction. But any type of writing, empiricist or theoretical, is its own sort of trick or lure, and Theory of the Gimmick, for all its academic density, is highly original in theme and suggestive in approach. You can doubt Ngai’s style and still buy all her theses.