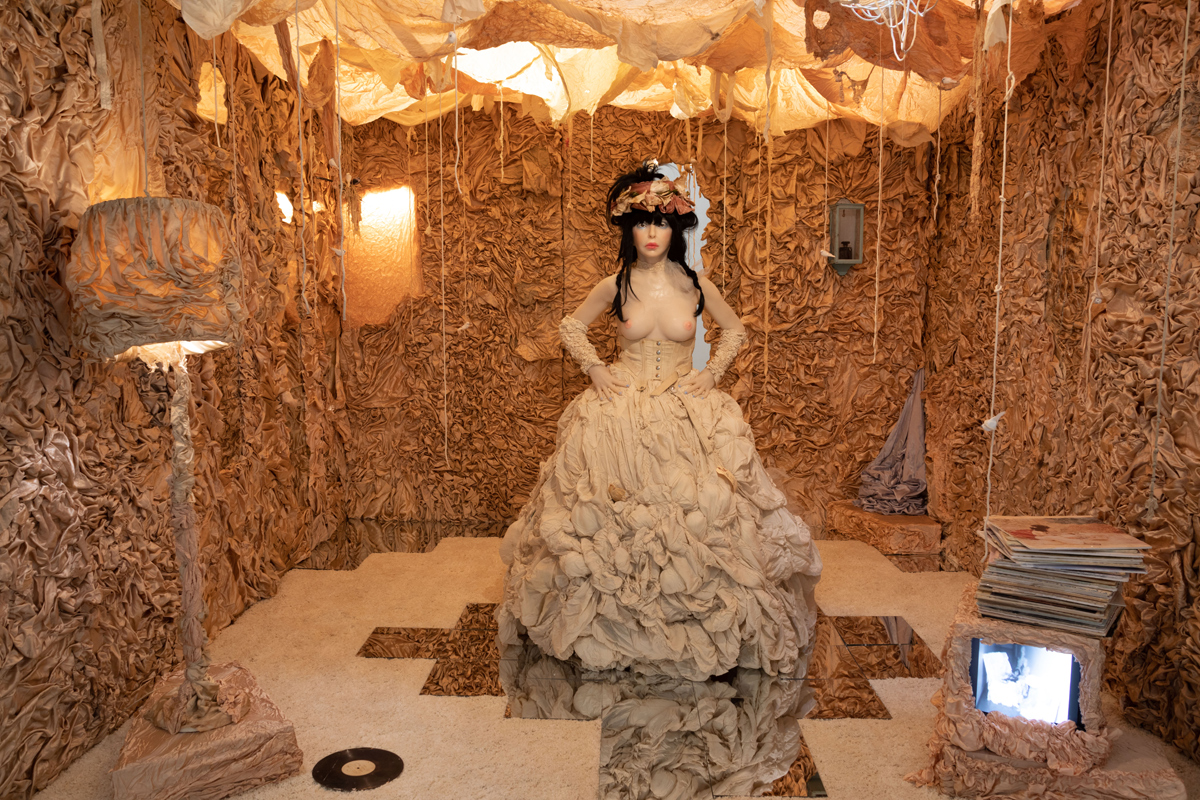 At the vanguard of riotous Parisians, the tricolor-waving goddess figure in Eugène Delacroix’s Liberty Leading the People (1830)—or a mere mortal whose gown has been torn to reveal her breasts—seems carried on a wave of corpses. In a photo of Colette Lumiere’s cloudlike tableau-vivant interpretation of the scene, performed in 1972, the artist, posing as Lady Liberty, stands alone in a storefront window. Satiny cushions in shades of petal pink and cream take the place of fallen bodies; pale, billowing drapery, like parachute silk, supplants the Romantic painter’s chiaroscuro backdrop of orgiastic unrest and carnage. (The New York–based Lumiere, who was born in Tunis and raised in Nice, has adopted several personae over the decades, her public shedding of identities a central part of her life-as-art ethos and mystique as a fixture in the downtown scene. She was, at the time of Hommage to Delacroix, known mononymously as Colette.)

This Delacroix performance, visible from the street, was the first of many such installation-endurance works conceived for diverse and often unconventional venues, its cloudlike ambience growing dreamier in subsequent efforts. While she had previously devoted herself to large-scale outdoor painting, executing cryptic designs of broken lines on SoHo pavements at dawn, she now turned to interiors, the transformation of inner spaces, and to the exposure of private acts or states—most notably, the vulnerable, passive, psychically rich, and physiologically necessary pastime of sleeping. In 1978, for example, she napped in the windows of the Fiorucci store on East Fifty-Ninth Street. 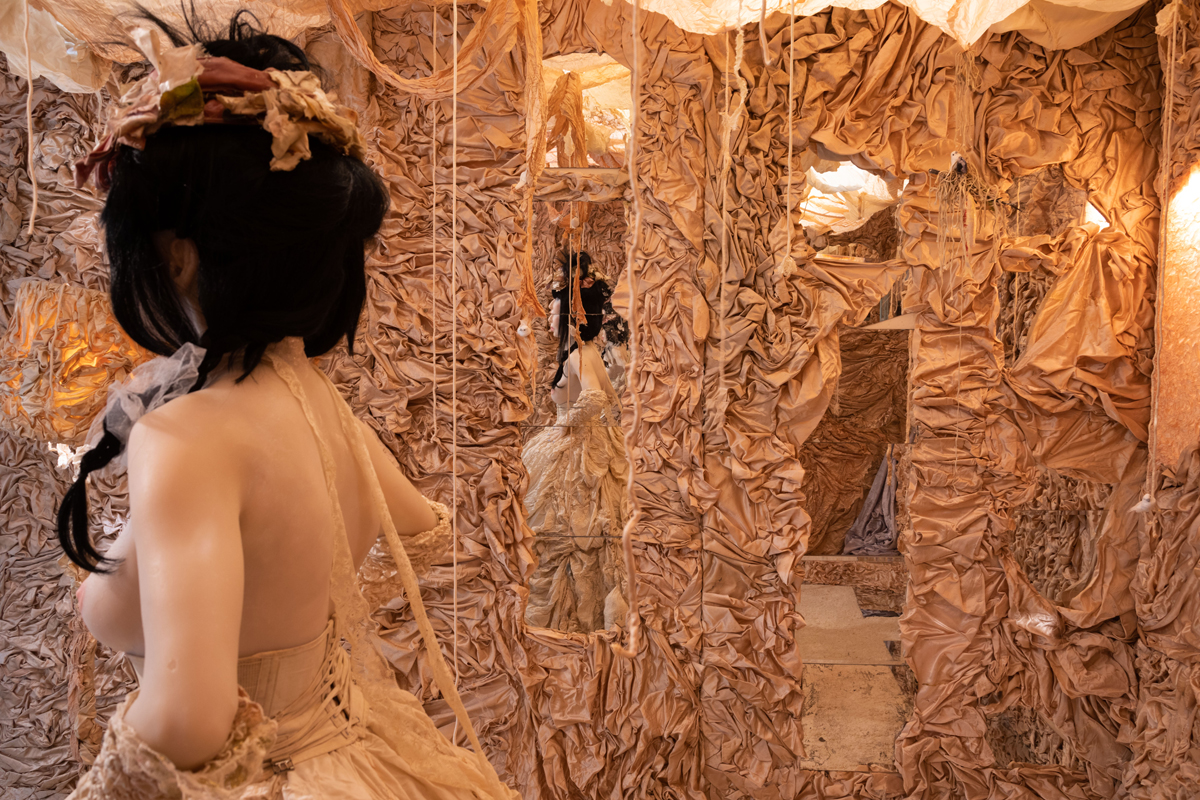 As the focused retrospective Notes on Baroque Living at Company Gallery illustrates—through a beautifully sequenced procession of garments, wall-based works, photos, ephemera, video documentation, and environments—Lumiere was not content with appearing occasionally in isolated dioramas. Her syncretic Victorian-boudoir, punk-Versailles style of overdetermined femininity was a twenty-four seven endeavor. Beginning in 1972, for more than a decade, she designated her Lower Manhattan loft her Living Environment. It was an artwork, a constantly morphing space, its walls blanketed with off-white and blush-hued ruched fabric to resemble the gathered sections of an antique bodice—a disorderly, expressionistic, sculptural, and unraveling one. 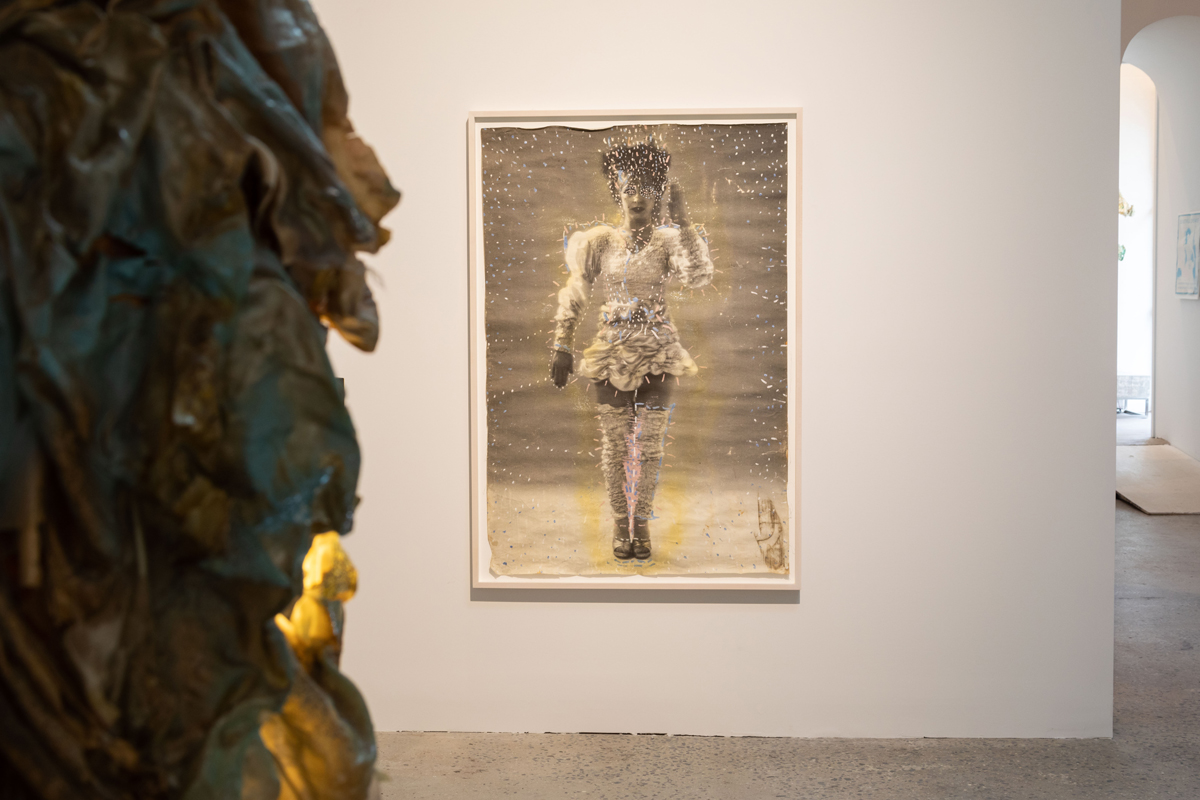 For Notes on Baroque Living, curator Kenta Murakami was commendably undaunted by the task of representing an engulfing historical installation in pieces. At times, the grandeur and density of Lumiere’s achievement is replicated or communicated; mostly, a differently seductive, forensic approach is taken—one that leaves lots of breathing space between art and artifacts. Nevertheless, crinkled expanses of chaotic fluting and pleating are everywhere in the gallery, beginning with Beautiful Dreamer Uniform (1980–82), a couture ensemble composed of a short silk frock and matching leggings, displayed on a dress form at the show’s entrance. (Beautiful Dreamer is the title of other thematically associated works—not all of them on view here—including a bed, which was shot for the Sakowitz department store’s 1979 Christmas catalog, and a single released the same year by her no-wave band, Justine and the Victorian Punks.) 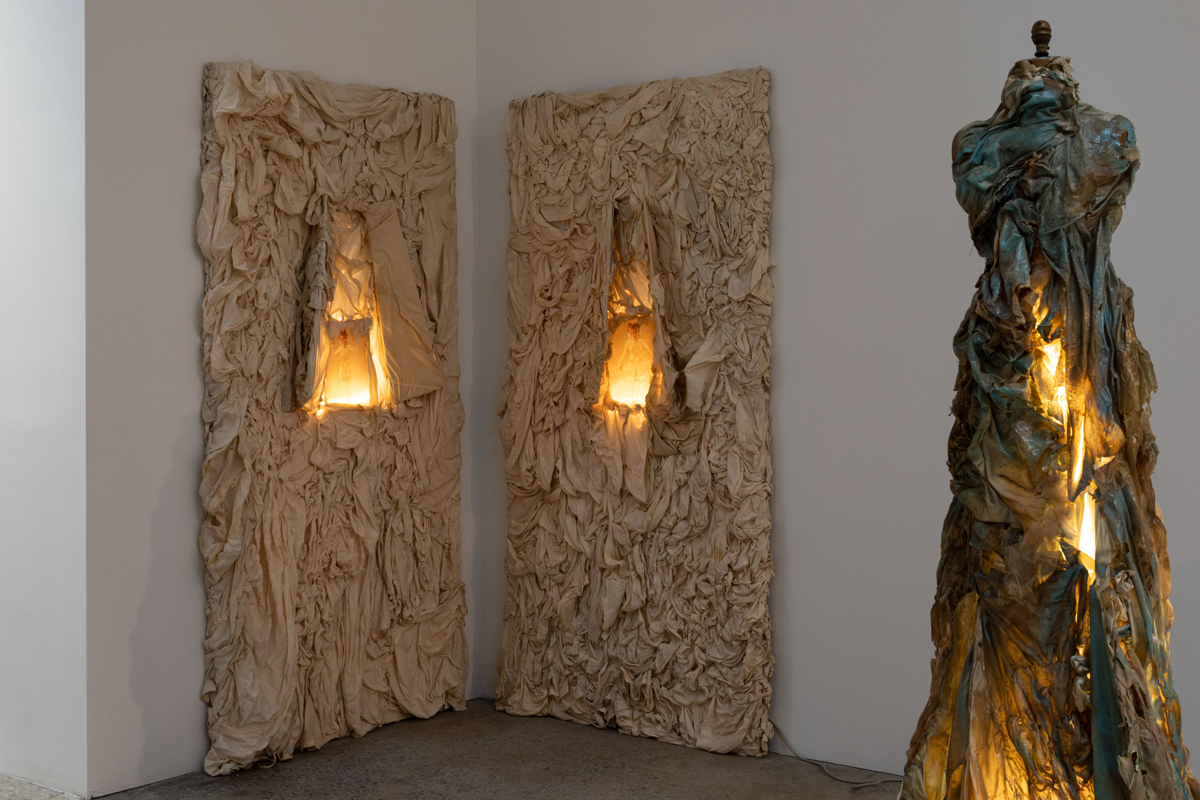 With the help of a staple gun, Lumiere created the larger whorls and folds enveloping a pair of Wall Fragment works (door-size panels excavated from the loft and preserved), dated 1980. These mixed-media pieces feature glowing insets that viewers must draw close to examine. In each, a snapshot-size, semi-transparent photograph of the artist, wearing a variation of her Uniform, is illuminated from behind by a concealed light. The same magical advent-calendar device is used in smaller works—or environmental fragments—from her Off the Wall series (1972–83), which further demonstrate how the loft served as an exhibition space, as well as a kind of indoor grotto devoted to the artist’s image. The darkened basement level of the gallery, where lightbox works appear more dramatic in the club-y gloom, underscores the strange, somnambulant interiority of her aesthetic. 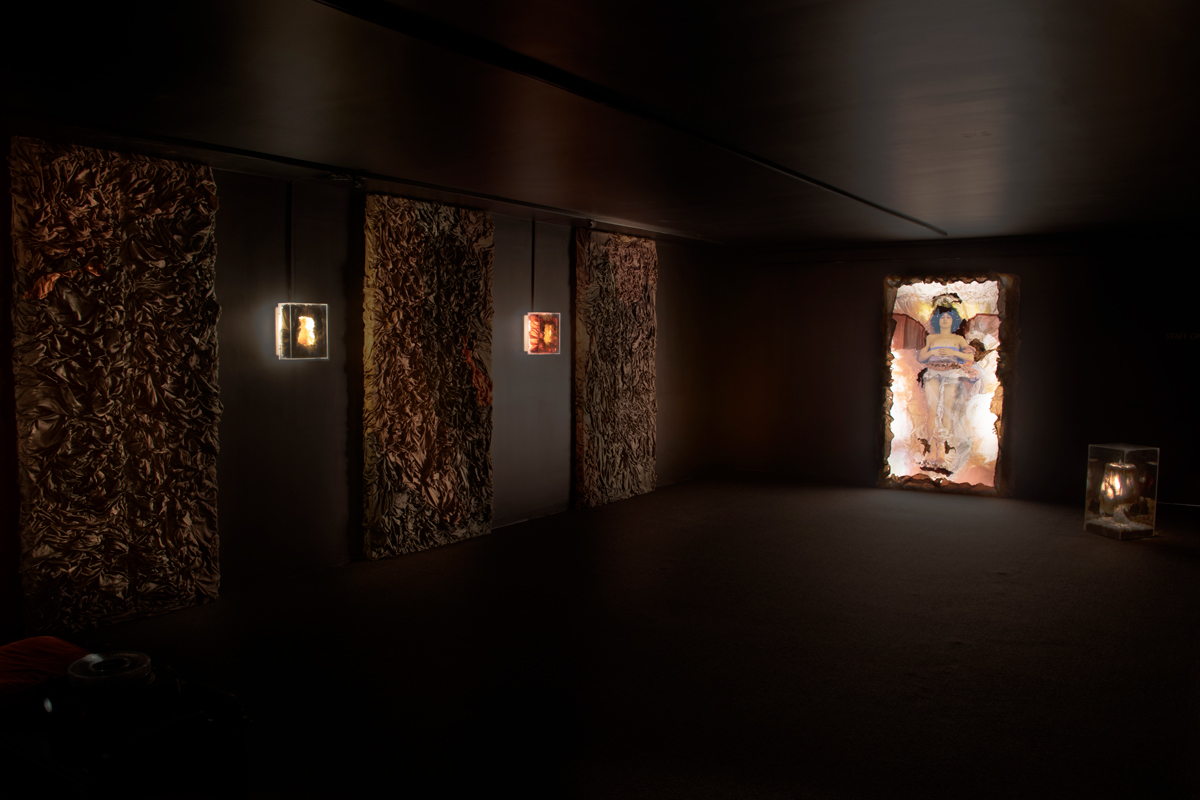 Lumiere’s output from this era employs an entrancing self-referentiality, a set of recursive and cumulative processes that recycle images (self-portraits and photo documentation of performances especially) across media, as well as objects (props and costumes that can stand alone), framing them alternately as artworks or boutique retail items. A garment from 1978–79, titled ‘I’m a Work of Art’ T-shirt Dress (Ripping Myself Off), emblazoned with her band’s song lyrics, tips into the realm of merch. The purposeful blurring of categories and the satirical commodification of a constructed self were key themes of punk, as was a ragged, fetish-y appropriation of period costuming (Vivienne Westwood’s iconic 1981 Pirate Collection was on the horizon). But the total commitment, obsessive craft aspect, and site specificity of Lumiere’s magnum opus sets her apart, as the show’s centerpiece, for which the exhibition is named, makes clear. 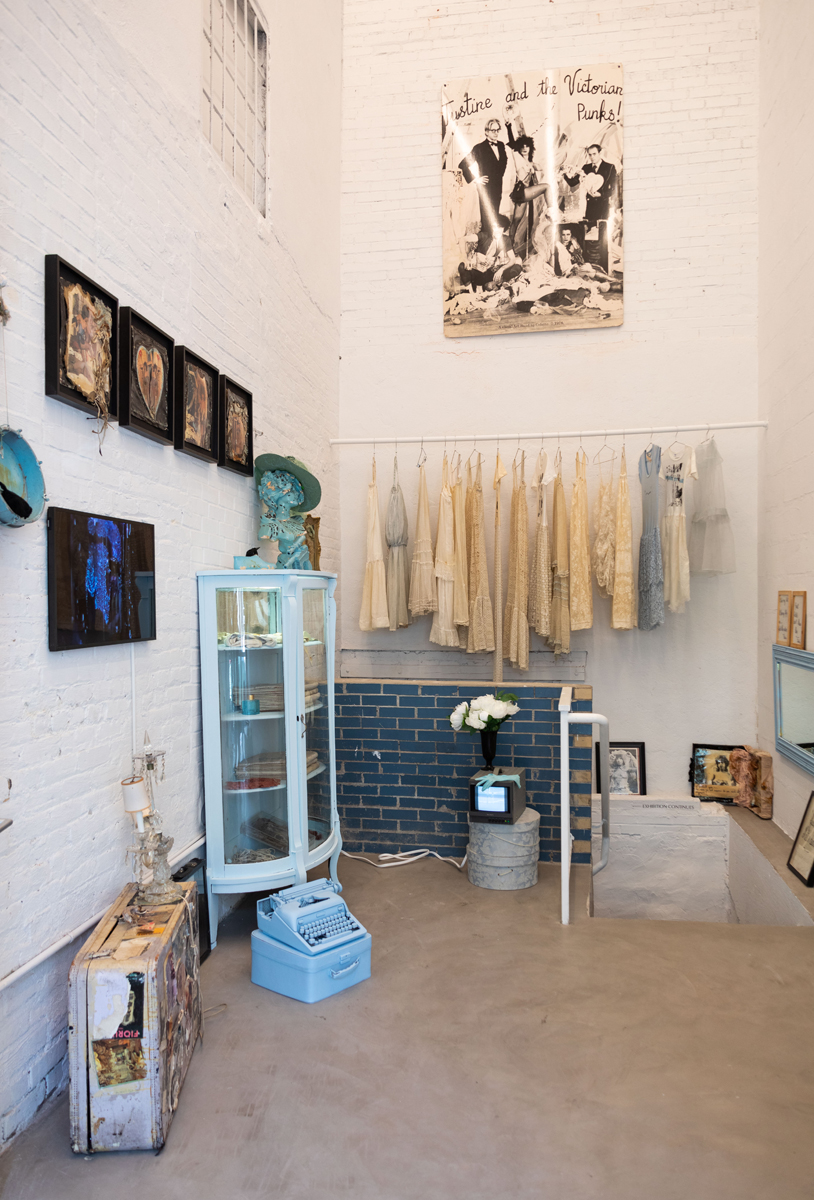 The abbreviated installation Notes on Baroque Living is a partial recreation of the artist’s Environment, which gives a taste of the effect her handiwork achieved en masse. Elaborately draped architectural elements, accentuated with mirrors and punctuated by fake white sparrows hanging from ropes, form a set for the dark-haired artist’s mannequin stand-in. The figure, in a crinoline skirt and corset, hands on hips, nothing on top, evokes Lady Liberty’s dishabille, but for visitors freshly acclimated to Lumiere’s world, this feature—and most others—of Delacroix’s famous canvas seems almost incidental to her core fascination. She has said she was attracted, as a feminist, to the image of “a woman leading the people who [is] also not afraid of showing her body in a very natural way,” but it is the area just below the mythic heroine’s exposed breasts that seems, in light of the artist’s labor-intensive décor, most important. The dress, ripped at the shoulder, flops down; a sash wrapped twice around the July Revolution leader’s waist creates a gathered volume, scrunched, its folds opening like a flower—like unsewn ruching. 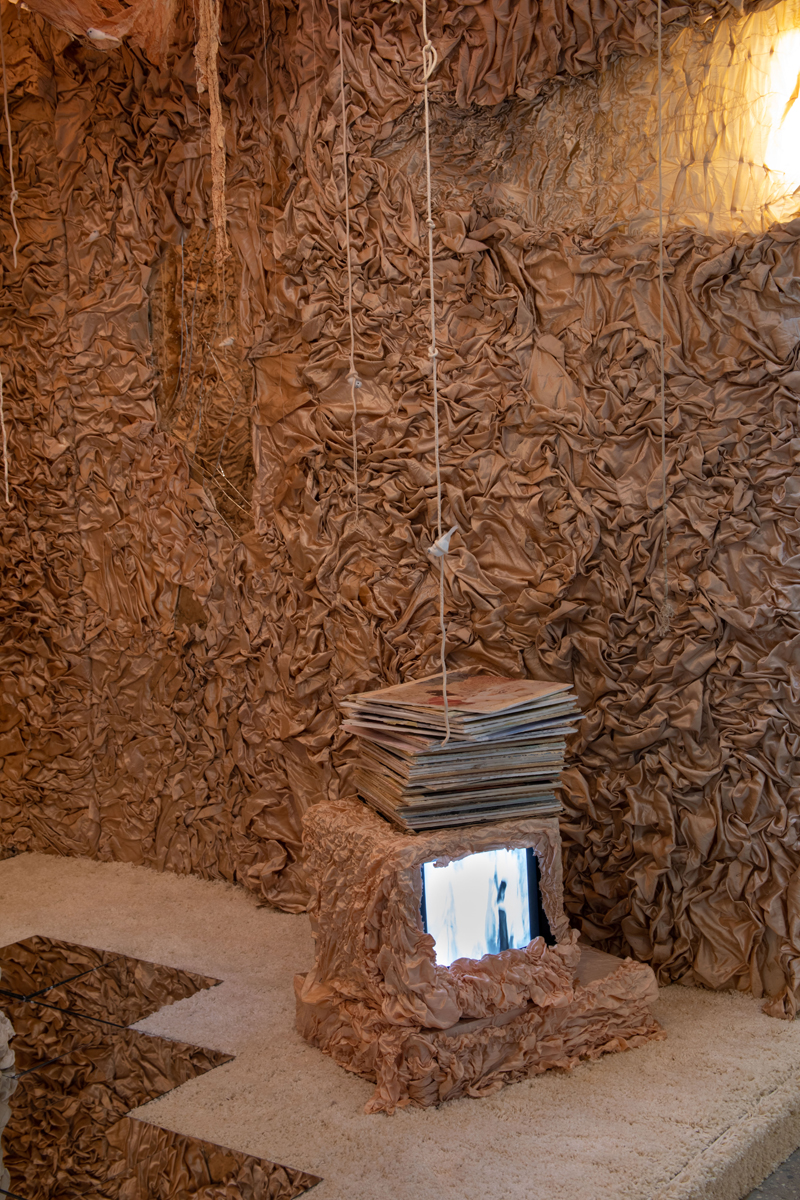 The ruche is Lumiere’s mark, her obsessive gesture. I imagine her adopting and multiplying the Neoclassical draped detail from Delacroix’s composition, first to buffer his painterly belligerence and the violence of his scene, then to soften, or lull to sleep, the entire world. Although, on the other hand, with her studiously excessive, lyrically haphazard, un-pristine execution, ruching can take on an aggressive, even grotesque, quality. It can recall swarming labia minora, the abject intransigence of Miss Havisham’s permanent wedding attire, the vulgar decadence of Louis XIV’s court. The obdurate romanticism of Lumiere’s aims and the absurdly frilly femininity of her oeuvre’s look have perhaps exiled the artist from accounts of the Conceptualism and Postmodernist feminism of the day, but when viewed in sufficient quantities, her eccentric, ambitious work loses its prettiness, gaining a uniquely wicked edge, one that has not dulled with age.