A conceptual artist charges $1000 per visitor, and asks, what do you
want in return? 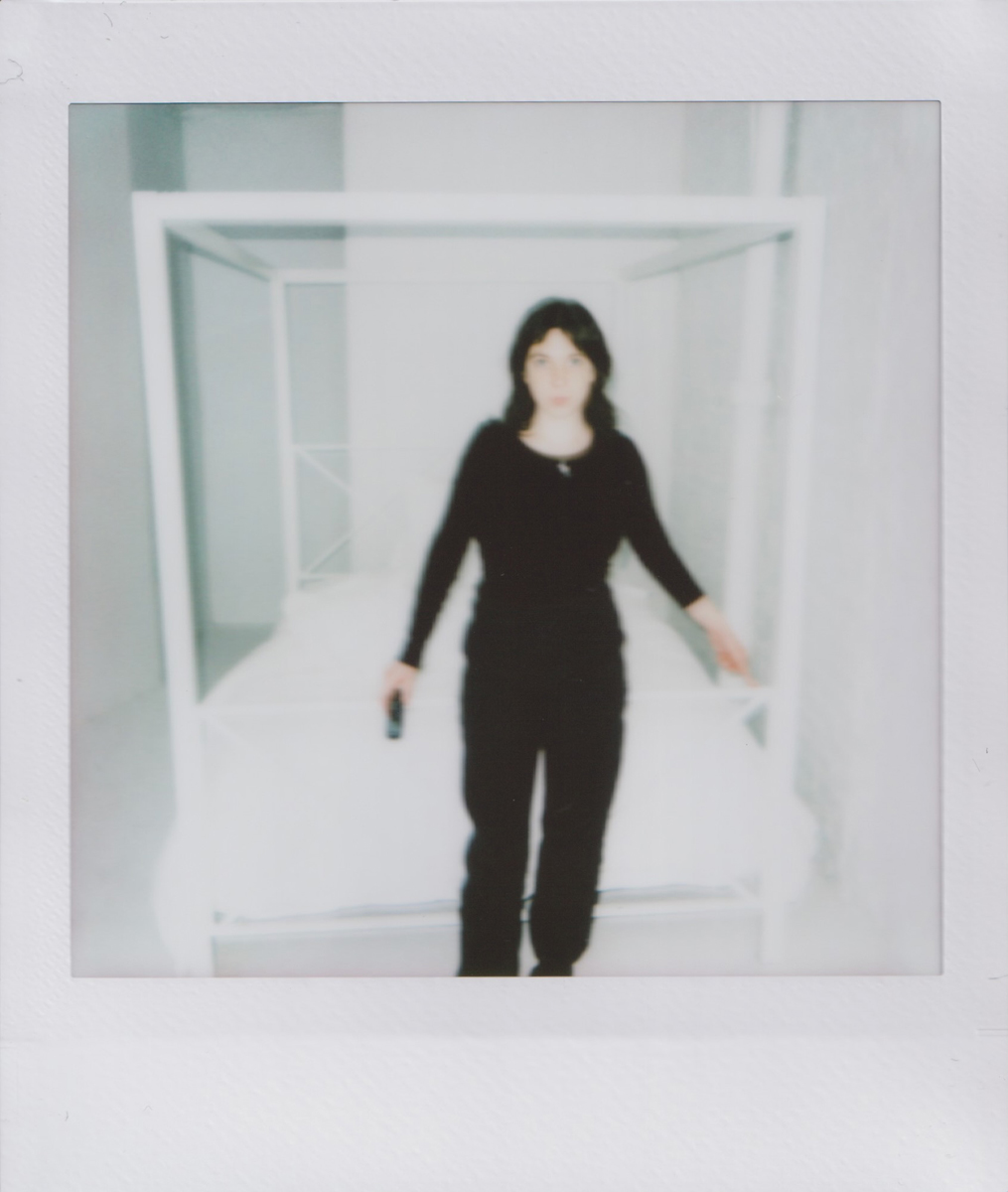 The gallery is closed to the public during Sophia Giovannitti’s show at Duplex, except by individual appointment, for a fee of one thousand dollars, no exceptions, not even for me. Paying visitors to Incall: Study 2; Contract meet with her in an all-white room, unfurnished but for a canopy bed and two low stools, to strike a deal, or to begin negotiations, for the fulfillment of a wish. “All desires come with attendant, bespoke costs,” the coolly oblique press release emphasizes—a grand just gets you in the door. But for the rabble (an invite-only crowd of several dozen) there was an off-site opening, like a house party with its piles of winter coats and bottles of liquor, in a penthouse suite at the Bowery Hotel. A few minutes after eight, chatter halted for a performance by the artist. 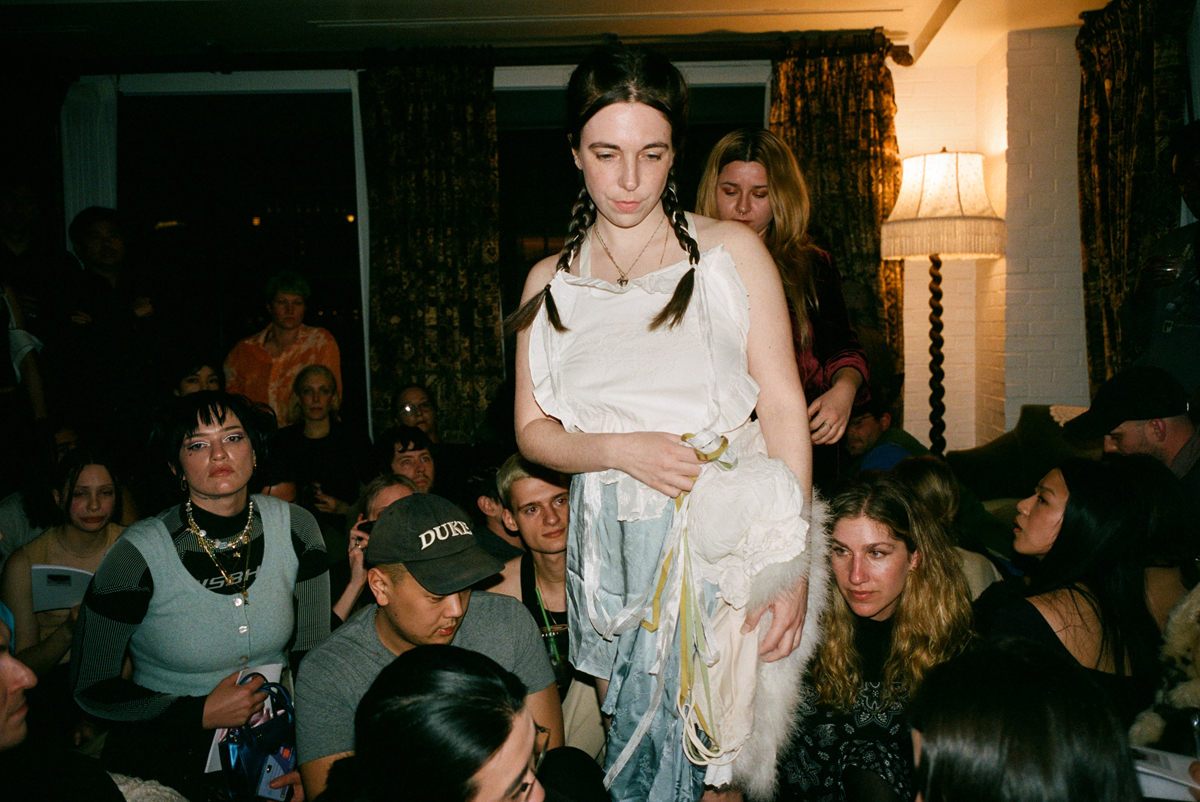 Giovannitti is also a sharp writer, alternately earnest and arch in the theorization of her conceptual practice, which explores, as her bio explains, “the commodification of parts of ourselves we hold dear” and seeks to “re-choreograph the flow of capital through the art and sex industries.” (She contributes essays and articles to magazines, and her book Working Girl: Art and Sex Under Capitalism will be published by Verso in 2023.) Not surprisingly, perhaps, the night’s performance, titled Failure as Form, was, in large part, a reading. The artist leveraged, for dramatic effect, not only the glamour of the suite, with its four-star, floor-to-ceiling views, but also the significance of the site within her text: the Bowery Hotel is the scene of a negotiation with a male curator, in which he promises a future, unspecified, but implicitly art world–related favor in exchange for sex—a verbal contract he reneges on. 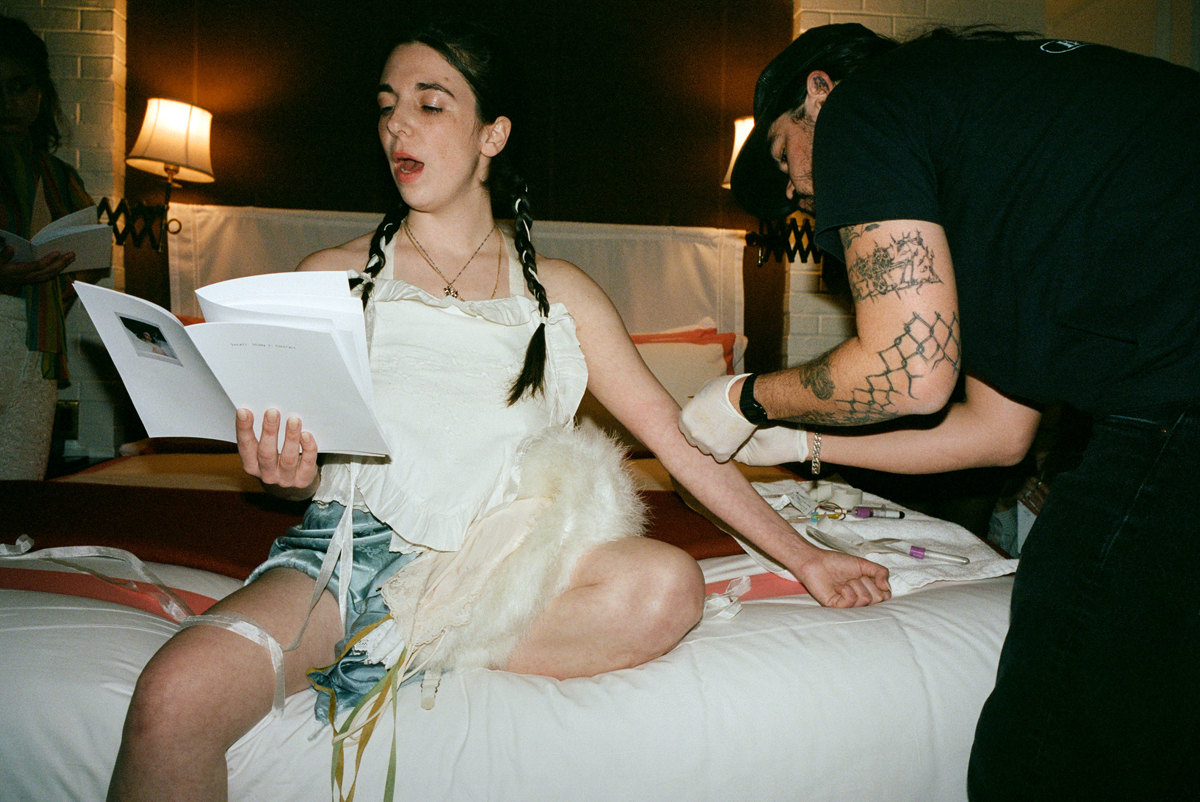 Syntax and affect were aligned in Giovannitti’s dry delivery; her tone was one of philosophical equanimity, with an edge. Sitting on the suite’s king bed, she read from a chapbook, simply laid out and printed on white paper. (Copies from an edition of one hundred were distributed to the audience.) In anecdotes showing that sex work is not merely the subject of her art—she’s interested in the two fields’ overlap—Giovannitti illustrated the problem that Contract sets out to address: a pattern of breached agreements, disappointments, and frustrations. Though a critique of the convenient obfuscations and social norms that facilitate the extraction of uncompensated labor has broader applications—and the artist does zoom out in her piece, discussing abstract dynamics as well as specifics—the sex industry is an apt emblem and case study for her argument that “work, sales, wages” are all, as she writes, “hyper-sexualized by their very nature, by their pre-conditions of exploitation, prohibition, discipline, and hierarchy.” 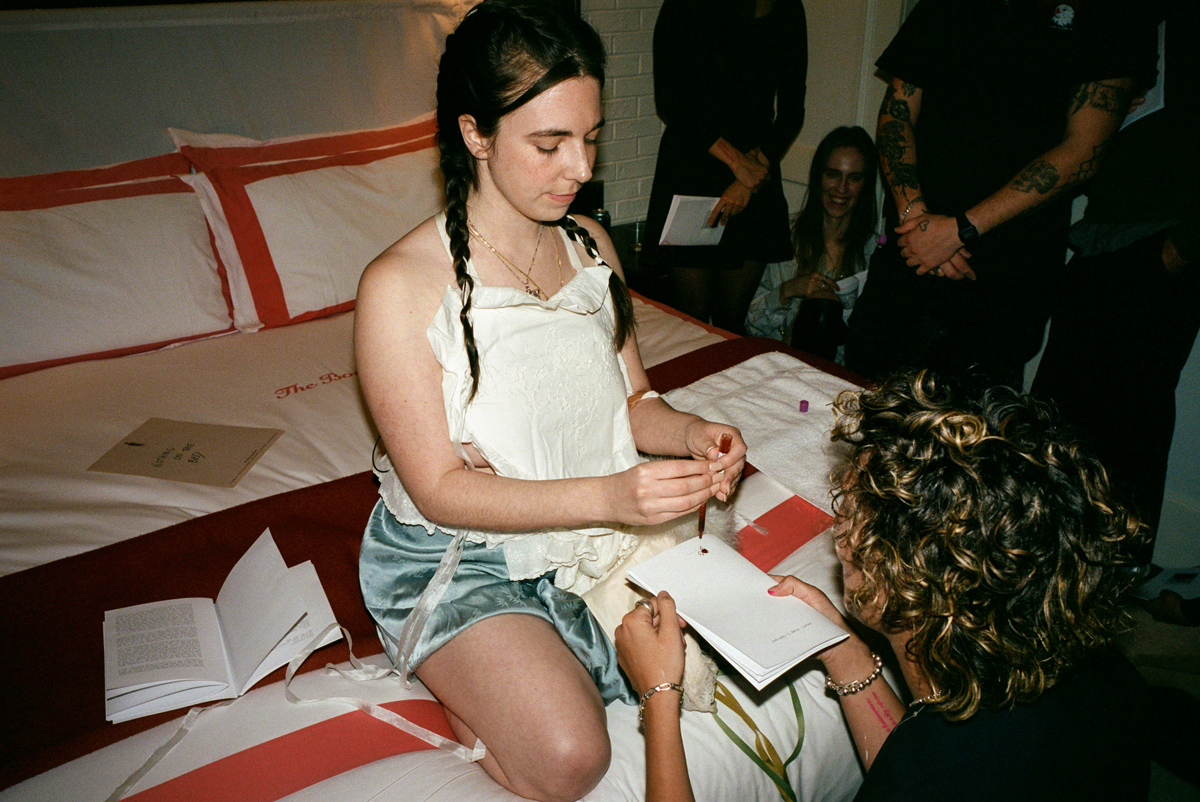 Her aim, ultimately anti-capitalist, is not for the moment (in Contract) to directly protest free-market principles or art-world quid pro quo, but to force transparency—to set her price and get what she’s owed. In the past, Giovannitti has stated her conditions clearly, even crassly, during her extralegal negotiations (such as in the case of the aforementioned curator), but such informal bluntness has failed, she explains: “Making the terms of trade plain is so obscene as to be experienced, I think, as a joke.” At the end of the reading someone drew a vial of blood from her arm, and for all attendees who approached the bed, she stained their chapbooks with a few drops—for free.

On a sunny afternoon, a little more than a week later, I brought a thousand dollars in cash in an envelope to Duplex for my meeting with the artist, who greeted me in silence and handed me a document titled Choreography 1. Instructions at the top directed me to sit down and “Speak first. Answer any of the following questions.” The aesthetic dimension of Giovannitti’s procedure, her confrontational approach to building a contract (beginning with the webform submission of an appointment request) is stylishly officious and somewhat absurd, but she succeeds in establishing its seriousness: making the terms of trade plain here is unlikely to be experienced as a joke. The list of prompts on the page before me, designed to lay bare the invisible or traditionally unspoken factors the artist might need to establish an informed bargaining position, evoked sober rumination in me—even when her demeanor proved casual and convivial, and she assured me I didn’t have to respond to anything I didn’t want. 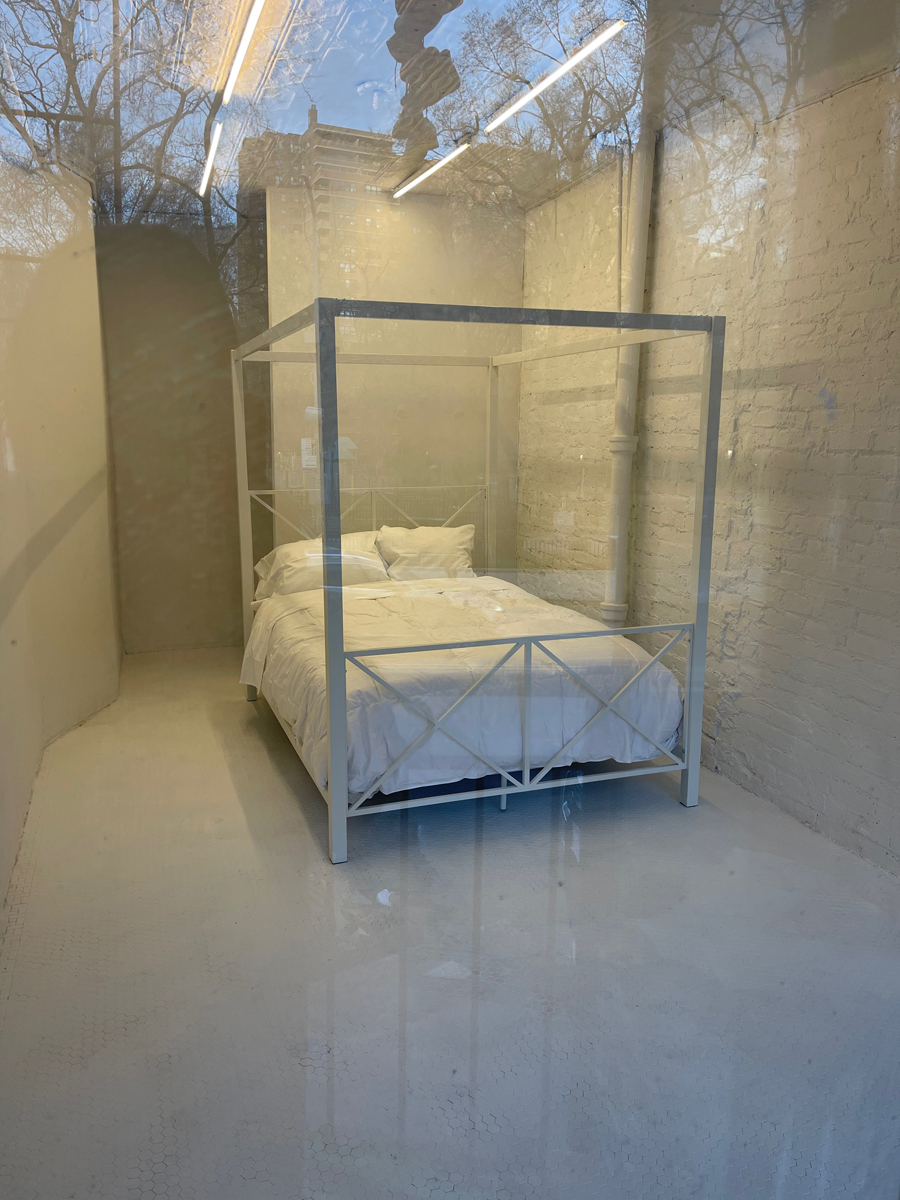 There were questions meant to elicit information about my social capital, such as it is, as well as my lifestyle, and, of course, my financial state. I attempted to answer honestly, though I can hear, listening back to the recording I made for reference (Giovannitti made one, too), self-abnegation and confusion, maybe evasion, in the way I hedge or hesitate. In reply to How much money do you have? I said another two hundred in cash, before realizing the amount I had on my person at the moment was probably not what she meant. More baffling was the question at the heart of the matter, which got at the whole reason I was there, and so seemed impossible to skip: What do you want from the Artist?

The truth is, nothing in particular; I was just there to check out her show. And, frankly, I confessed to her, I’m used to artists wanting something from me. It seemed like an ugly thing to say as a critic, and it doesn’t reflect how I really feel, but Giovannitti, without apparent judgment, agreed, suggesting our contract—between an artist and a writer—was a fait accompli. She stood to benefit from a review of her work, I needed to participate in Contract to write one. It felt slightly weird to say aloud, but it was also a relief—instead of haggling, we spoke about bedding, the art world’s mysteriously moneyed, Me Too, and the relationship of capitalism to rape. 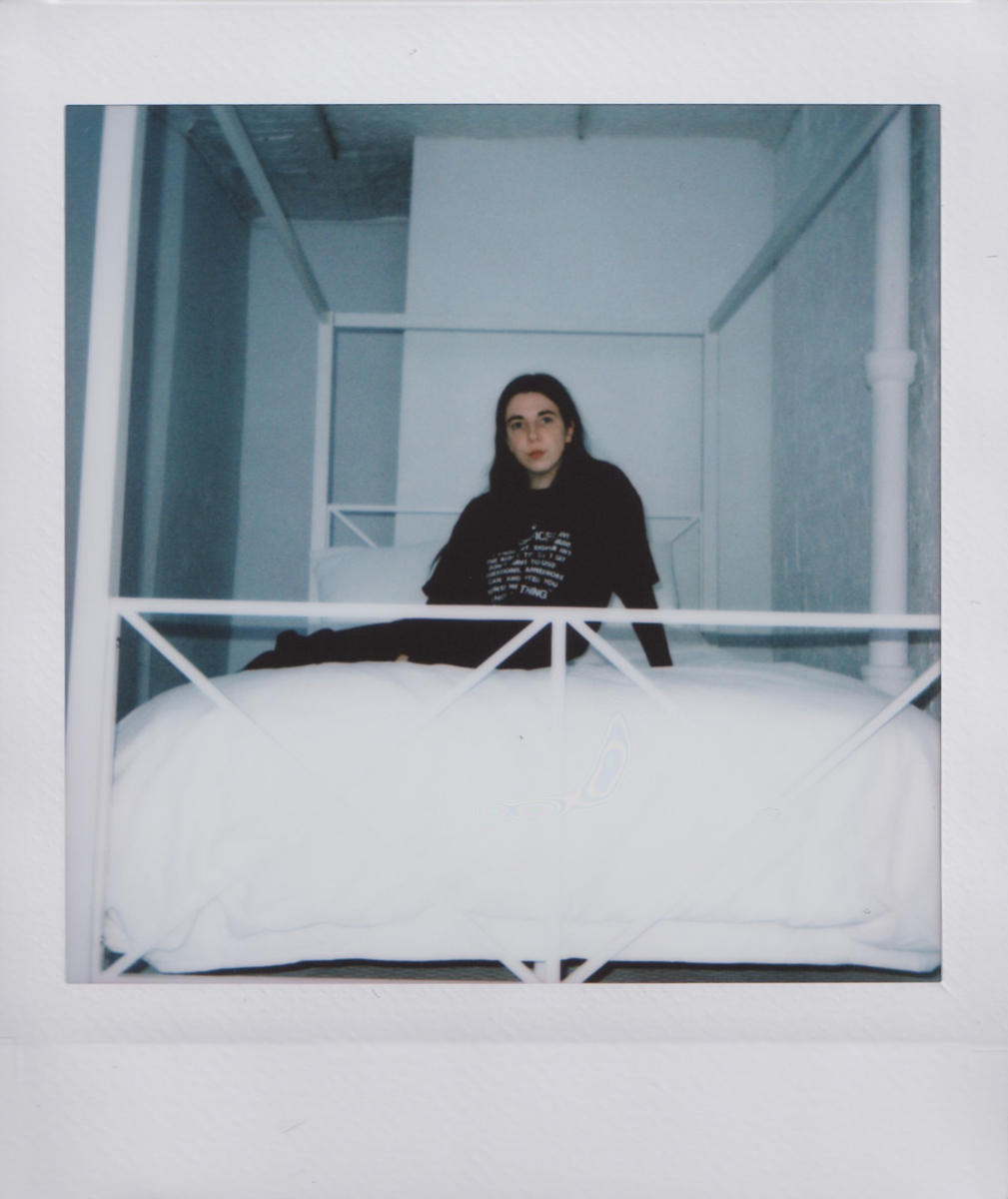 A thousand dollars is, coincidentally, also my fee for writing this piece, a detail I shared with the artist almost right away. Our situation—both parties assured of payment for our time, desiring only to talk—might seem one of rare and pleasant symmetry, but the nature of Contract is to throw such assumptions into doubt. I was not sure that, by the end of the hour, I would not have somehow accrued additional costs; I was careful not to make assurances I could not absolutely guarantee (Giovannitti vaguely threatens, in her press release, to publicly expose those who default); and though my audio file seems to capture women who’ve had a lovely time, laughing as they say goodbye, on the train home I recalled with alarm that the artist had told me the gallery’s cut was 50 percent. So, after getting reimbursed by 4Columns for Giovannitti’s fee and paid upon the publication of this piece, I would actually come out ahead.

I wondered if I’d write something worth five hundred bucks to Giovannitti, and I felt a pang of dread. But the anxiety that such unsentimental, transactional analysis breeds, I told myself, might just be the discomfort of the new. The beauty of the work, for a customer like me, should be the clarity of the deal: I’ll write whatever I want, as always—I didn’t promise it would be good. And if she had wanted the twenties from my wallet, which I had dutifully or stupidly disclosed, she simply could have said.