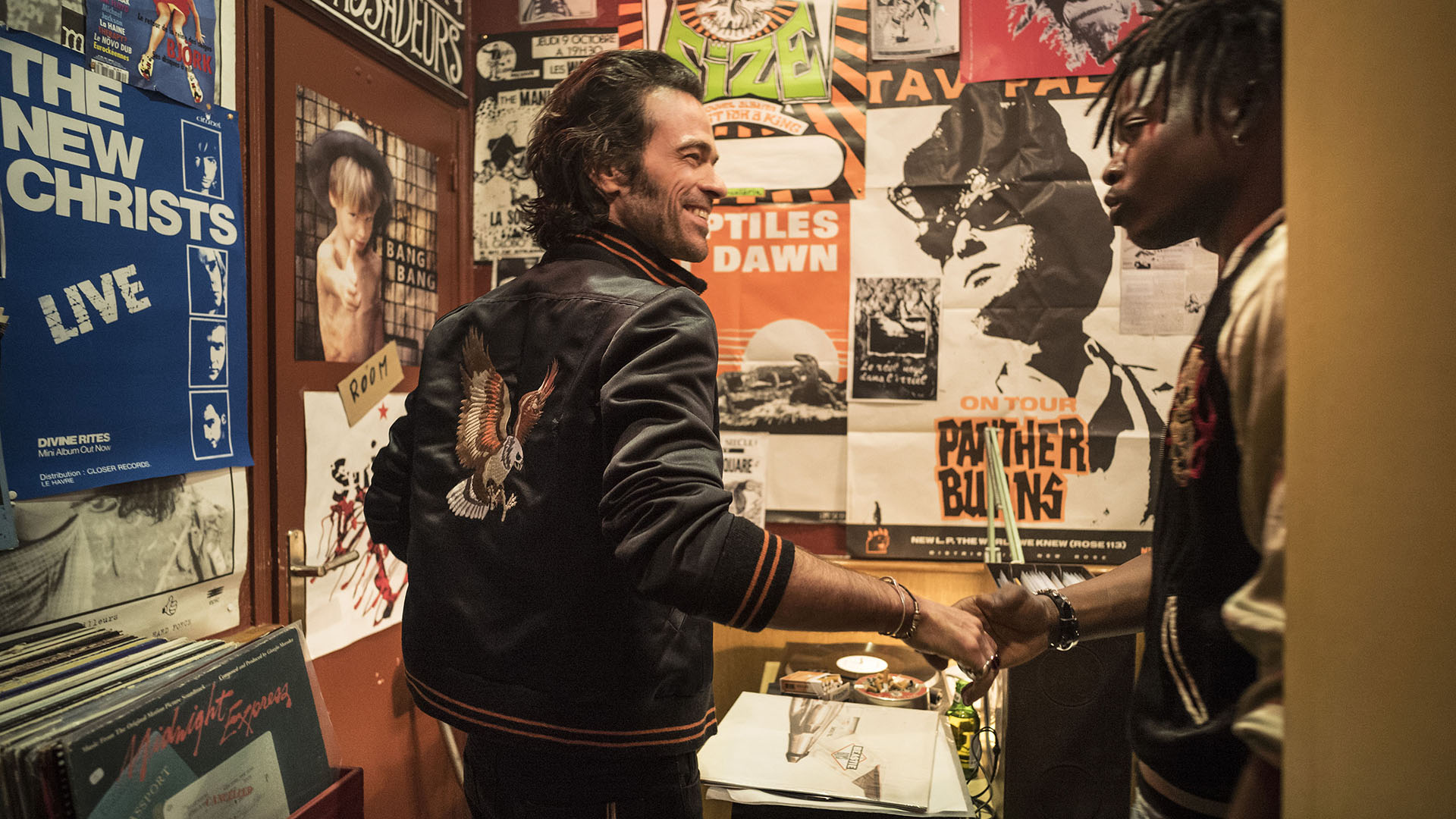 The nine interesting but not riveting episodes of Vernon Subutex, each roughly thirty minutes long, are well suited to a moment when true escapism seems neither quite right nor truly possible; when binge-watching distant, smaller-scale, stylized catastrophes can seem bittersweetly uplifting—especially when accompanied by an algorithmically exactly-for-you (that is, for me) soundtrack. The French series—based on the first two volumes (both 2015) of the best-selling trilogy of the same name by the novelist, filmmaker, and feminist public intellectual Virginie Despentes—is, in part, a straightforward story. The down-and-out protagonist of the title, the once-upon-a-time proprietor of a Parisian record store called Revolver, attempts to reconnect with the hard-partying, antiestablishment Gen Xers of his salad days, who dispersed to grow up almost two decades ago. 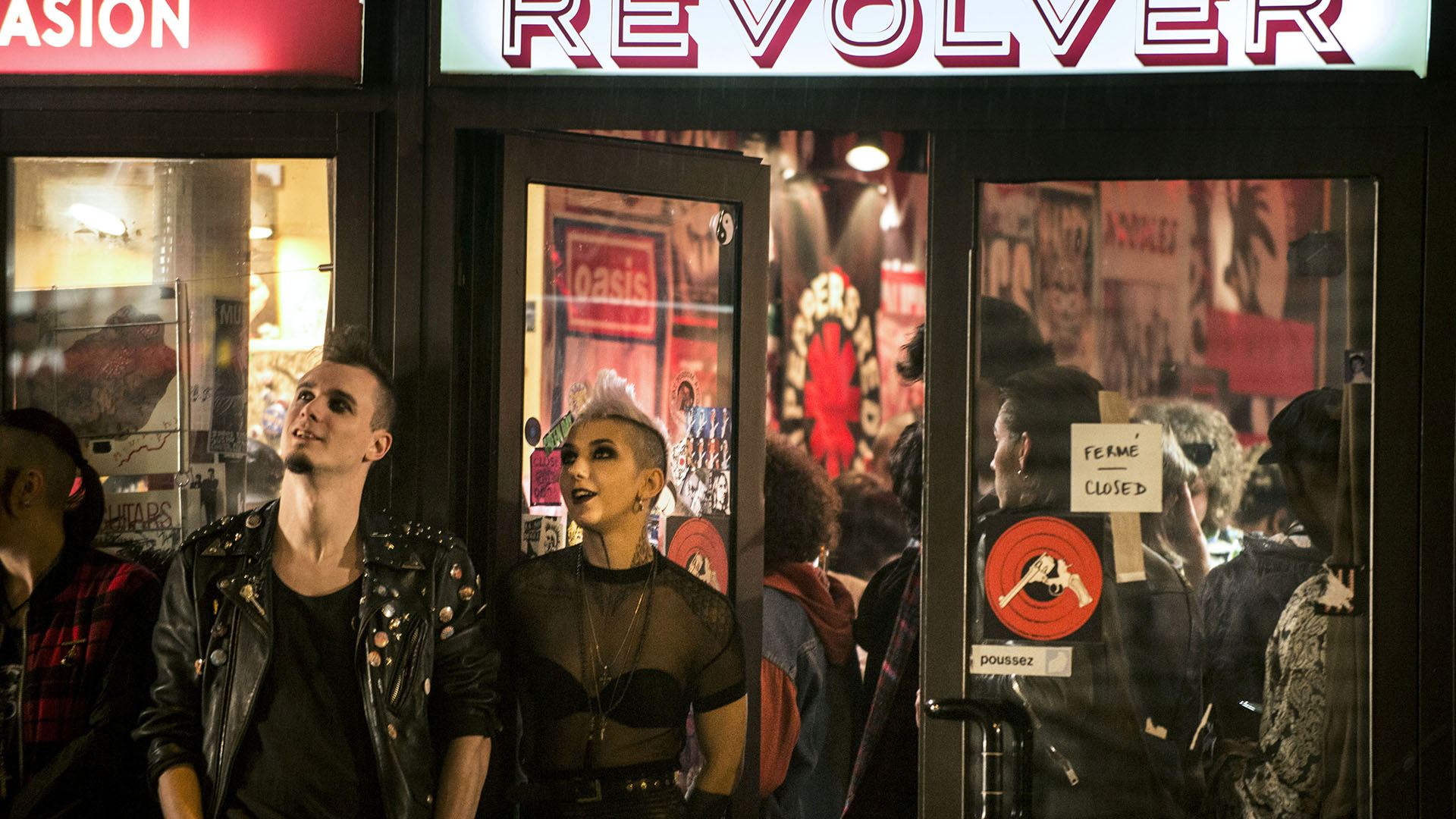 It proves to be a humbling antihero’s journey, rendered in shades of both melancholic and acid satire, against a backdrop of gentrification, corporate-controlled media, and encroaching right-wing populism, circa now. But what might be a smooth narrative arc anchored in social critique and subcultural nostalgia is entangled with—get this—an alternately campy and profound, starkly unbelievable but basically successful lesbian-romance action-adventure. A stranger counterpart to the show’s methodical, intimate portrait of Subutex could not be imagined.

Played convincingly by the scrawny forty-something Romain Duris, Subutex performs a practiced Peter Pan naiveté and disheveled bohemian cool, a resilient persona that bounces back after a succession of blows, but finally, irreparably cracks. He’s managed to leverage his sex appeal and punk pedigree long after his ’90s heyday, but his eviction from his apartment, which takes place early in the first episode, marks a swift descent into life on the street—though you could say his problems really began, as did those of every purveyor of vinyl, at the dawn of the millennium, with Napster’s opening of the digital-distribution floodgates. When the bailiffs burst in to take possession of Subutex’s barely furnished, rock-and-roll bachelor pad, located just above his defunct shop, he hopes to offset his sixteen months of arrears with a test pressing of the first album by Les Thugs (a somewhat obscure, grunge-adjacent French hardcore band). “You won’t find this on iTunes,” he says to his unwanted visitors, as he smiles in his underwear, holding the collector’s item in one hand, a cigarette in the other. 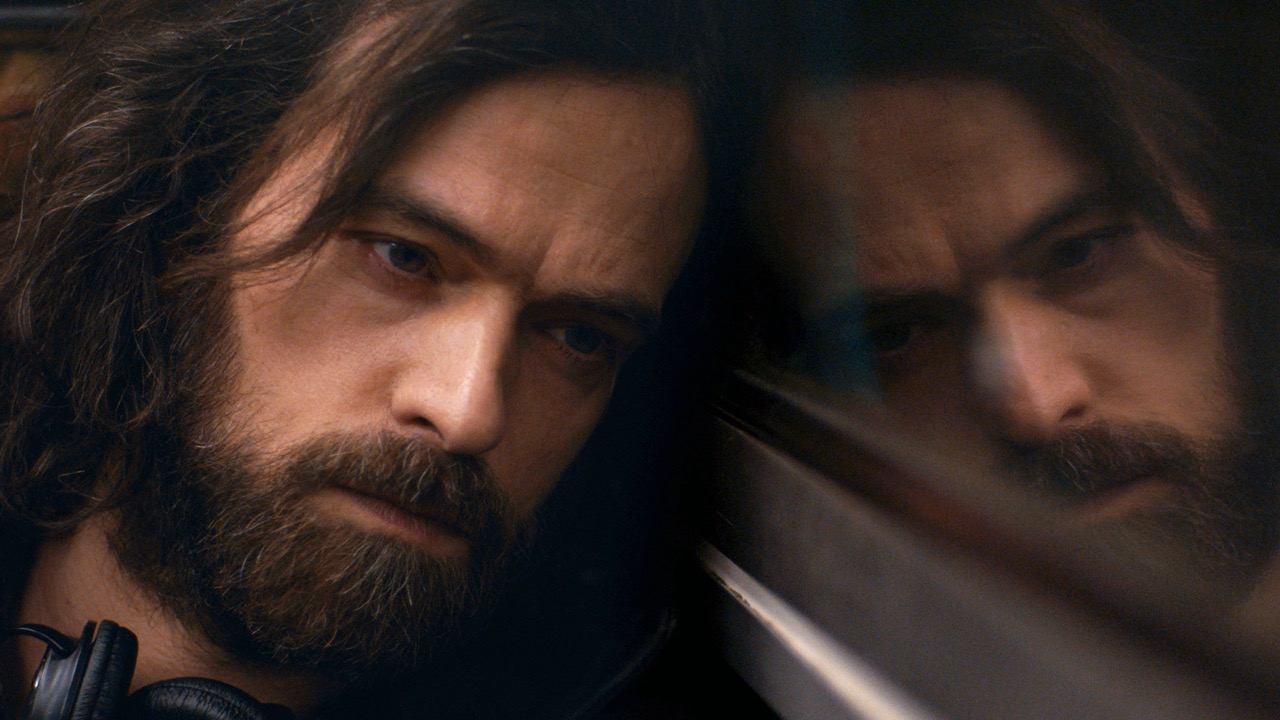 However conscious he is that the demise of analog has precipitated his own, Subutex is no Luddite. Gathering himself on the sidewalk outside his building, where Revolver’s darkened shop windows are wheat-pasted with posters, he cues up “Abdul & Cleopatra” (1978) by Jonathan Richman & the Modern Lovers on a pocket-sized MP3 player. The show cleverly simulates the monologuey interiority of Despentes’s prose with a simple conceit: we hear what Subutex hears as he traverses the city, headphones on. Richman’s unvarnished, unsteady voice—plaintive but wry—is a poignant projection of Subutex’s romantic, obstinately good-humored outlook, as well as the vulnerability he’s not ready to admit. In every episode, the effect of perfect song placements is magnified by the fiction that Subutex has chosen them. There are tracks by The Jesus and Mary Chain, Sonic Youth, Suicide, The Raveonettes, and The Adverts, as well as sharply or vaguely familiar things I had to search for in the credits. 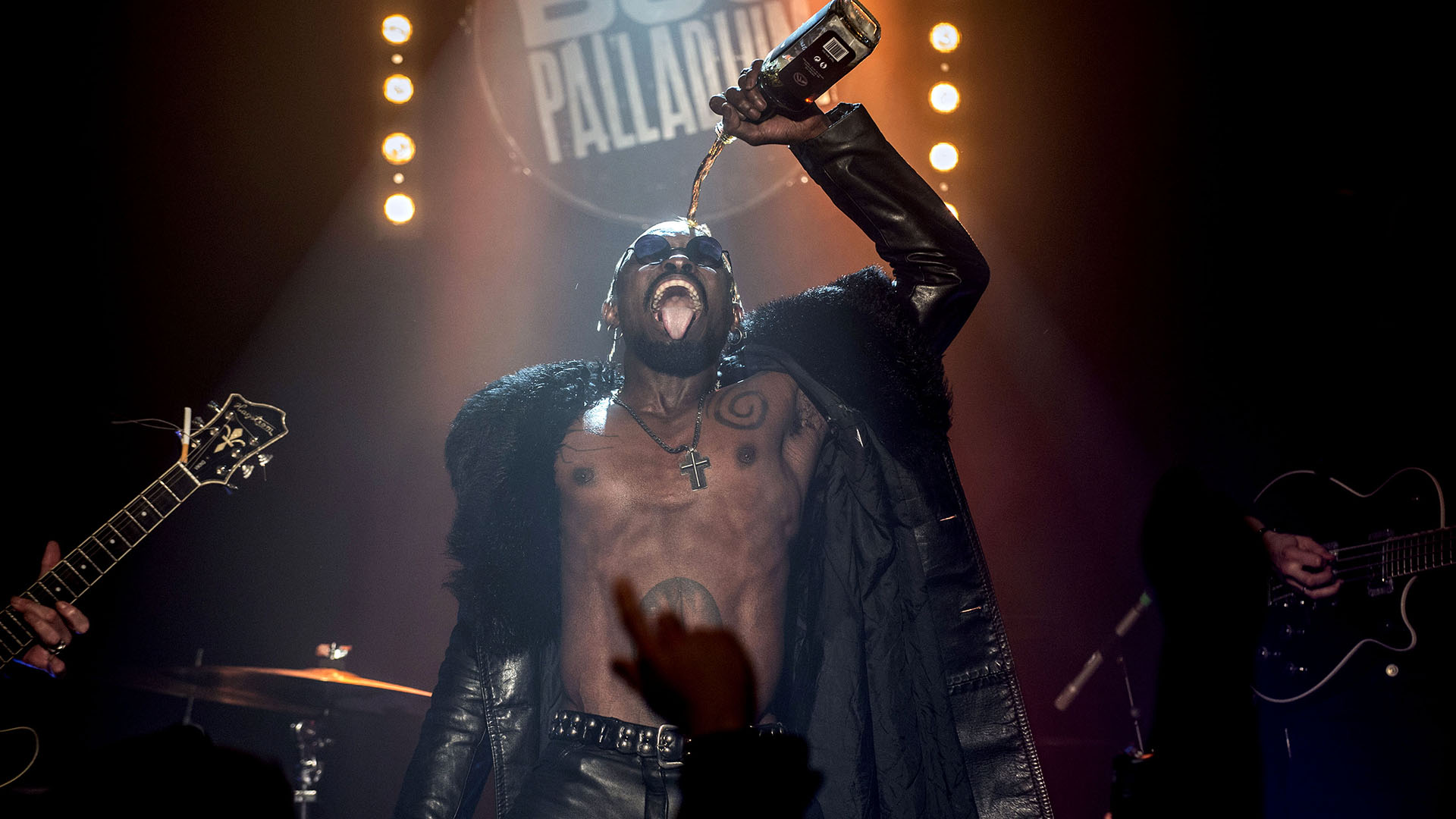 Plot intrudes on ambience in Vernon Subutex, though. During the tragic night that he spends backstage with Alex Bleach (Athaya Mokonzi), a rock star friend from the old days who’s made a comeback, Subutex secures a promise for a blank check (unfortunately not the check itself) before things go terribly wrong. Bleach, who has threatened to expose the criminal secrets of the story’s villain—a powerful, short-fused, woman-hating film producer named Laurent Dopalet (Laurent Lucas)—learns he is, in turn, being blackmailed by Dopalet’s hired gun. After hours of dark, coke-fueled reminiscing, Subutex falls asleep, awakening to find his friend dead from an intentional overdose. Grief-stricken and penniless, he is now cursed with three digital videotapes containing Bleach’s tell-all suicide note, recorded while Subutex was unconscious. 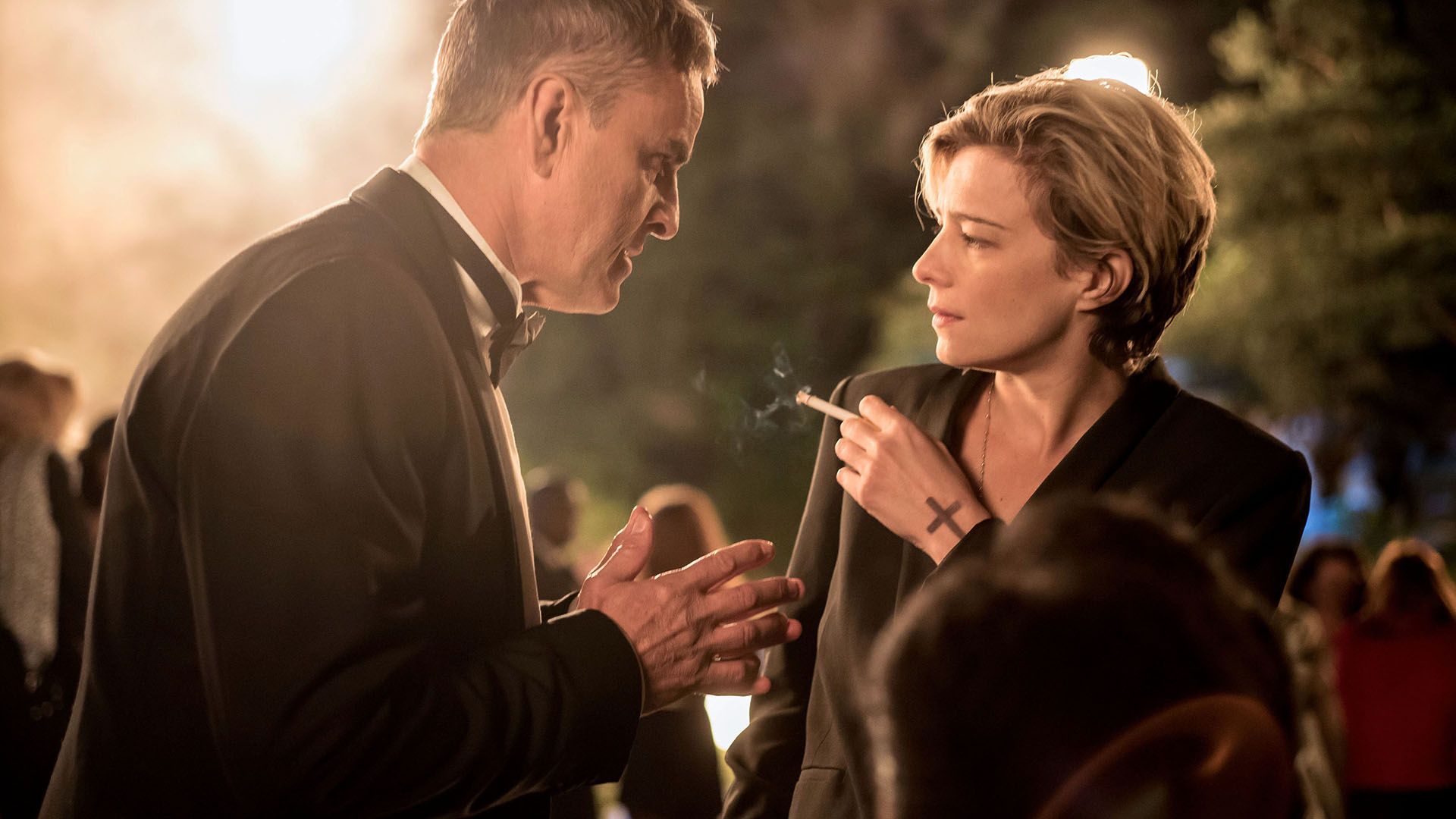 As it happens, it is a motorcycle-riding soft-butch lothario called the Hyena (Céline Sallette) who does Dopalet’s dirty work, and this is how Subutex’s downward spiral intersects, absurdly, with a queer pulp-mystery storyline.

The boss’s brainy, ostensibly heterosexual new hire, Anaïs (Flora Fischbach), catches la Hyène’s eye and the two take off to the Cannes Film Festival together on some pretense, where they learn, by chance, that Bleach may have left behind an audiovisual last testament. The Hyena knows it may be damaging to Dopalet and thus it must be found; Anaïs thinks, at first, that they are simply seeking exclusive footage for a documentary. Their hunt for the tapes takes them to a dyke bar in Barcelona, into a radical demimonde of porn actors, and, of course, into bed. Subutex tries, unsuccessfully, to fuck his way into some kind of stable housing situation, while the two women—at first locked in a clichéd courtship of conflict-based sexual tension—are transformed by their relationship, and then by what they learn when they watch Bleach’s monologue. The Hyena rethinks the ethics of her mercenary freelance work. Anaïs seeks vigilante justice. 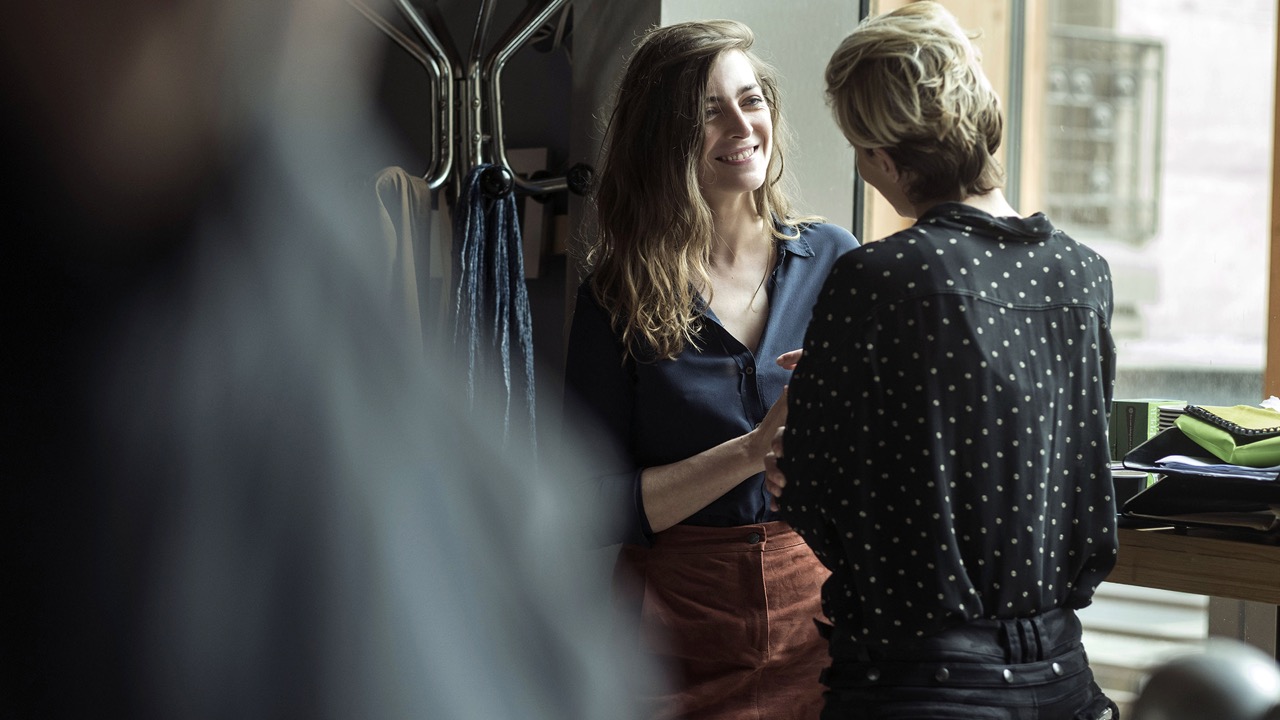 In Vernon Subutex, characters toggle between cartoony abbreviation and persuasive depth, from scene to scene or even line to line. Disruptive as this may be if one wants to be entertained, and who doesn’t, there’s some pleasure to be found in the show’s conceptual edge. Before the success of her three-part tome, Despentes was perhaps best known for her ultra-violent rape-revenge novel Baise-moi (1993) and its 2000 film adaptation; or, in some circles, for her brilliantly blunt collection of essays, King Kong Theory (2006), a landmark text of late third-wave feminism, in which she reflects on her experiences in porn and sex work. More recently, she made a buzz—in my timeline, at least—with her Libération editorial, eloquently skewering the Césars (the French equivalent of the Oscars) for handing the award for best director to Roman Polanski. “Your pleasure lies in predation, it is your only understanding of style,” she wrote in her lengthy, correct excoriation of the entire film industry.

So Vernon Subutex’s strangeness can be seen as not only true to form for Despentes—whose uncommonly varied career is united by disloyalty to genre as well as the imaginative, merciless exposure of sexual violence—but as a kind of metafiction, drawing upon her past work as well as her own life. Even the Hyena has appeared before, as a character in Despentes’s page-turner Apocalypse Baby (2010). And after Anaïs has pitched Dopalet a documentary about “a gang of Bolivian feminists who graffiti the homes of unpunished rapists,” and he replies contemptuously, “Ok, what genre is it in? Gonzo-gore? Lesbo-lefty-Z-flick?,” it’s as if he’s barking at Despentes herself. 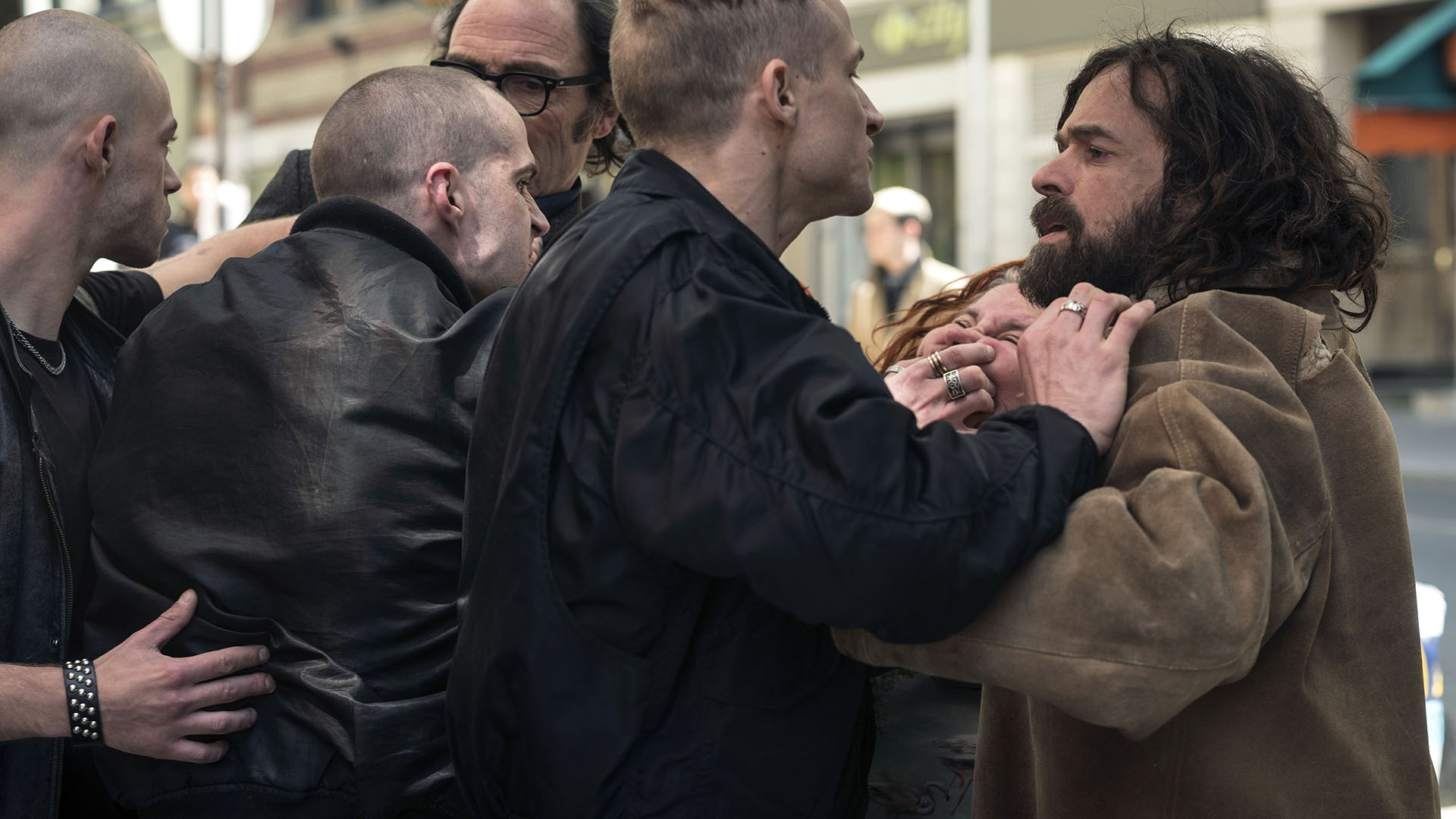 I’d insert a spoiler alert here if I didn’t think the ending weren’t somewhat predictable. Trussed and gagged, his home defaced, Dopalet perhaps looks back at his dismissal of Anaïs’s portentous story idea with regret. Meanwhile, Subutex appears Christlike, unwashed, staggering, and delirious (he’s been injured in a skinhead attack after days of sleeping rough). In his ultimate harmlessness, his essential desire to lose himself in music, he seems to redeem male mediocrity as he liberates himself from his desperation to be what he once was. He no longer even wants a home. The dance party of the finale, with its slow-motion shots of the cast, might inspire an eye roll. The trancey beat is paired with voice-over from Bleach’s poetic suicide soliloquy, though, making clear that this resolution is not one of celebrating triumph, but of accepting grief and defeat. Maybe it’s just me, or maybe it’s the moment, but I found it touching.