Nonfiction
Above All Waves 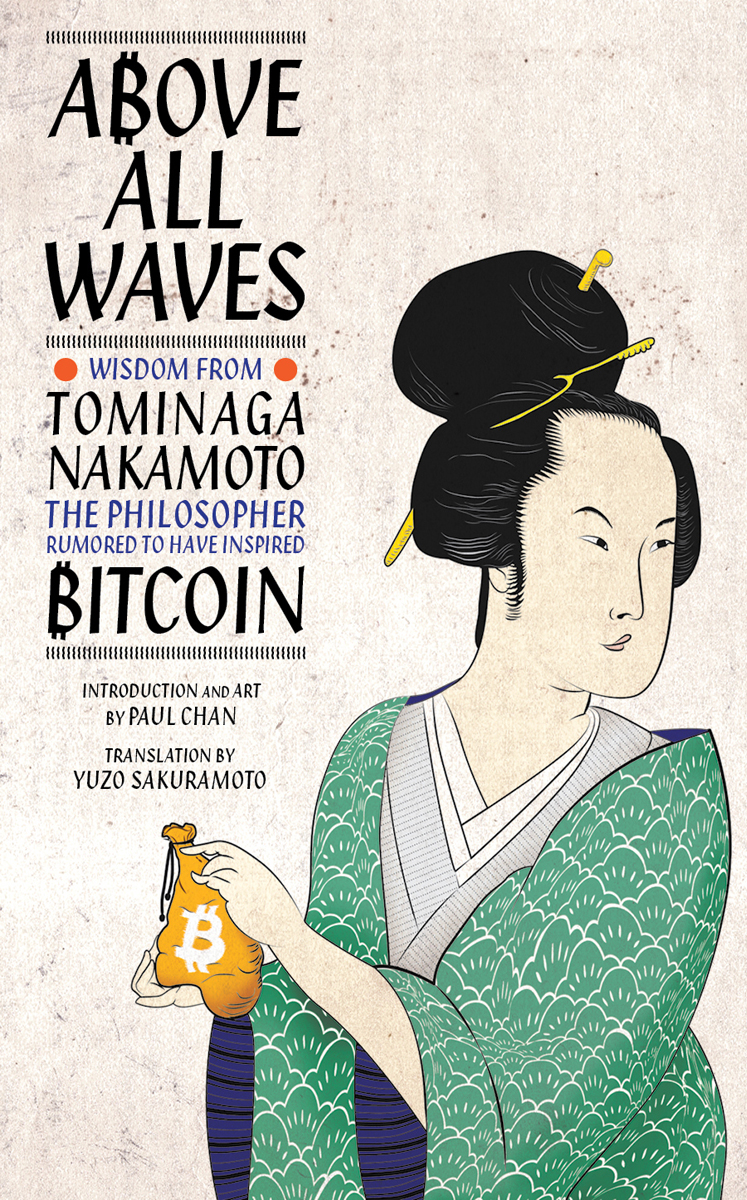 The long title of this short book is Above All Waves: Wisdom from Tominaga Nakamoto, the Philosopher Rumored to Have Inspired Bitcoin. If the advertising baked into that subtitle feels off, consider that Tominaga needs a measure of reintroduction. Obscure, at best, Tominaga’s last English-language book, Emerging from Meditation, translated by Michael Pye and published in 1990, is out of print. The only other Tominaga title you can access in English is The Writings of an Old Man, a brief text translated by Katō Shūichi and published in the academic journal Monumenta Nipponica in 1967. Most of what he wrote during his lifetime was destroyed by the adepts of a military regime, which is itself a kind of advertisement.

There simply isn’t that much Tominaga to work with. He died in 1746, at the age of thirty-one. And that seventeen-page tract in Monumenta Nipponica contains more of Tominaga’s words than this new full-length book. Above All Waves was assembled and edited and introduced by artist Paul Chan, in collaboration with translator Yuzo Sakuramoto, for Chan’s Badlands Unlimited imprint. This is really Chan’s book. His introduction is longer than the Tominaga texts, which are presented bilingually: English on the recto page with Japanese positioned verso, like a poetry book, with various spreads illustrated by the artist. Roughly a third of the passages in Above All Waves are from The Writings of an Old Man and the rest are from Emerging from Meditation, though Chan and Sakuramoto translate that title as Words After Enlightenment, as well as a few passages from the longest surviving Tominaga work, a treatise on music. The two worked from the original Japanese to create new versions, with Chan helping “to polish the wording,” as he explained it to me. 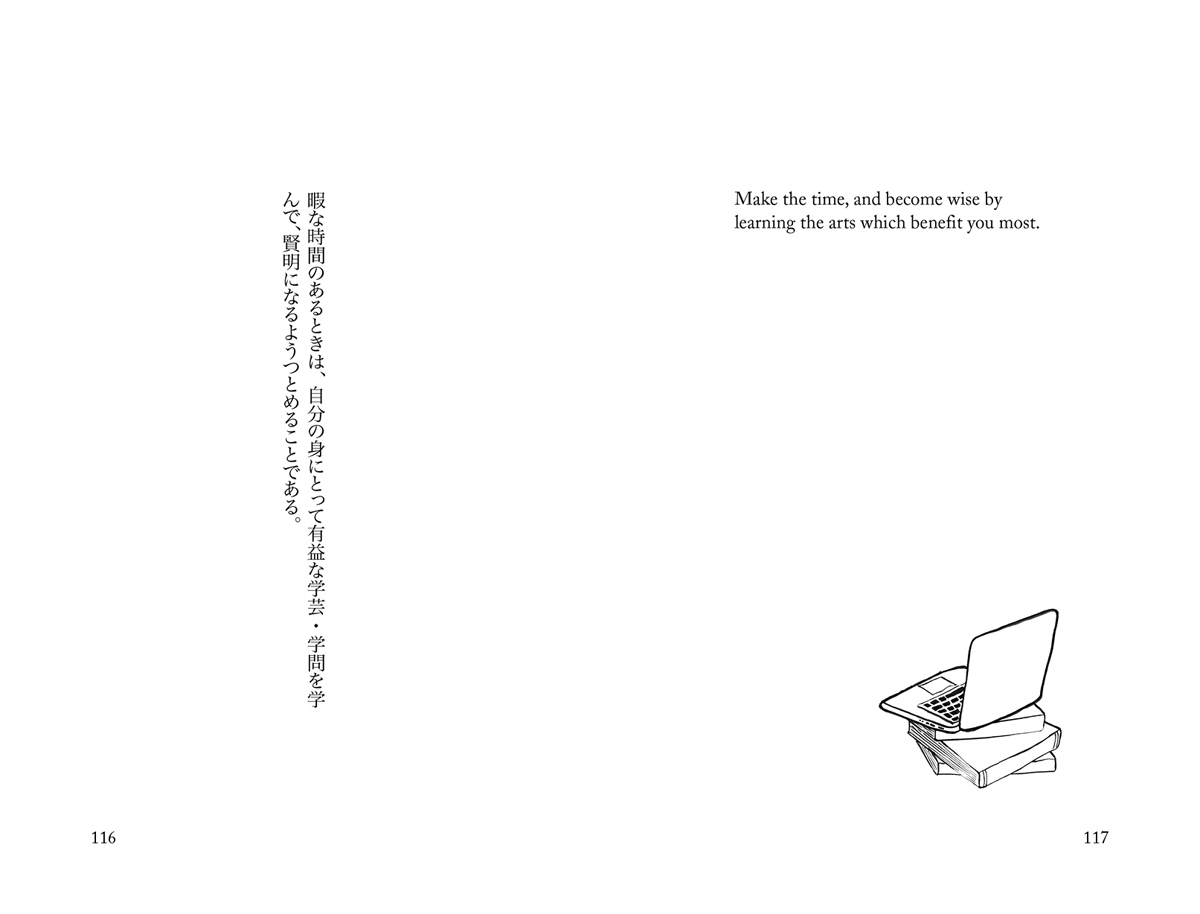 Spread from Above All Waves: Wisdom from Tominaga Nakamoto, the Philosopher Rumored to Have Inspired Bitcoin, pages 116–7. Courtesy Badlands Unlimited.

Chan’s project here is a set of variations, an expansion on the potent scraps Tominaga left behind. Chan writes that Tominaga’s philosophy was “unique within the intellectual history of the Edo period,” a time that saw Confucianism become the dominant mode of thinking (a little like our current viral strain of American Republicanism), a derivative of Confucius in which “virtue” was prized as the benchmark of being a good citizen. This involved a lot of filial piety and acceptance of the social order, which suited the ruling Tokugawa shōgunate class but did not appeal much to Tominaga, a child of the merchant class. Shintoism, Buddhism, and Confucianism had some purchase on the people, but Tominaga was suspicious of the lot. His motto wasn’t All Confucians Are Bastards, but it wasn’t not that, either. 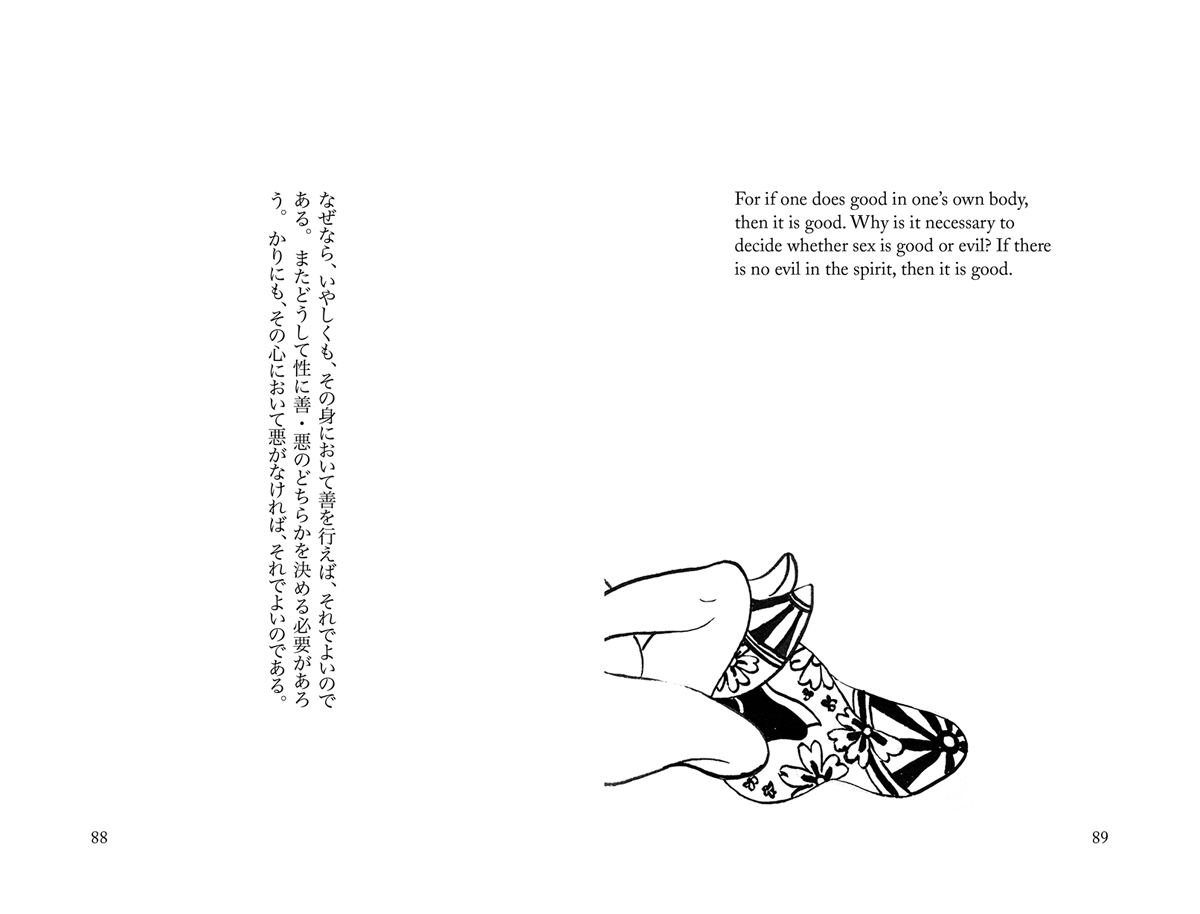 Spread from Above All Waves: Wisdom from Tominaga Nakamoto, the Philosopher Rumored to Have Inspired Bitcoin, pages 88–9. Courtesy Badlands Unlimited.

Tominaga repeatedly resisted how the shōgunate used Confucian and Buddhist teachings to underwrite their vision of social order. As Chan writes, Tominaga “relentlessly criticized ancient doctrines purporting to embody timeless moral values.” Tominaga sees all potential readers and writers as equal, nobody more keyed into the divine than anyone else. His approach was essentially materialist; according to Chan, Tominaga knew that “the sages of the past were competing against rivals to win the hearts and minds of people in their own times, composing works in order to gain intellectual supremacy.” 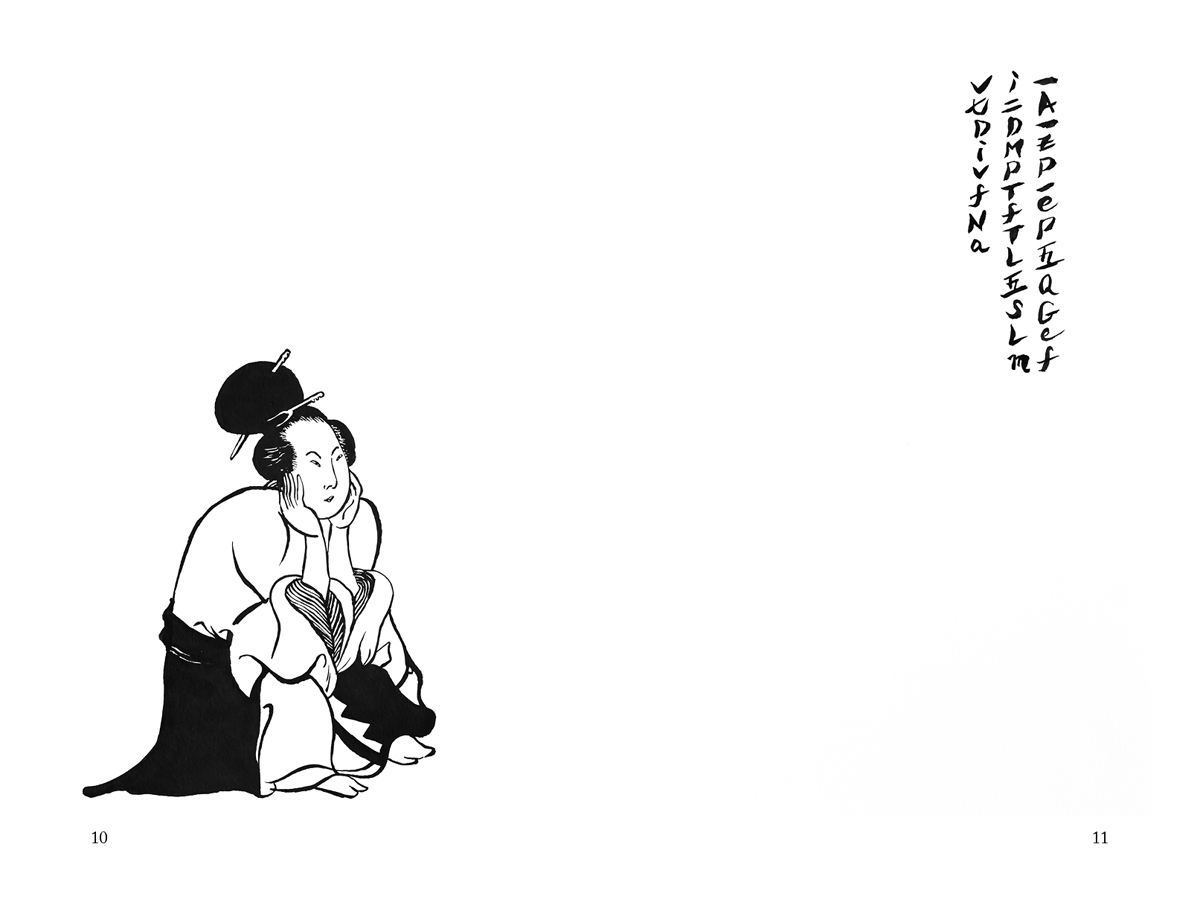 Spread from Above All Waves: Wisdom from Tominaga Nakamoto, the Philosopher Rumored to Have Inspired Bitcoin, pages 10–11. Courtesy Badlands Unlimited.

As for what was worth paying attention to, Tominaga put his faith in what people already have inside them. Chan characterizes this as “a kind of radical empiricism,” where “lived experience centers a philosophy truly worth believing in.” This belief goes hand in hand with a structural skepticism that puts Tominaga close to deconstructionism at points: “When reading an ancient book, one must always interpret it within the context of that book, and if one were to follow the meaning of a word from another book and use it as a guide, there would be many failures.” (That’s the text from one entire spread.)

A lot of what Tominaga writes here would likely be classified by some as self-help, which in many ways was itself a sub rosa genre at the time: “Strive to put yourself in other people’s situations and do not wrong them.” Tominaga wrote in a spiritual atmosphere far removed from Christianity, but this did not prevent him from echoing the sermon on the mount: “Do not be snide and mean-spirited, do not be misleading about people’s motives or be difficult, and do not be a bully.” 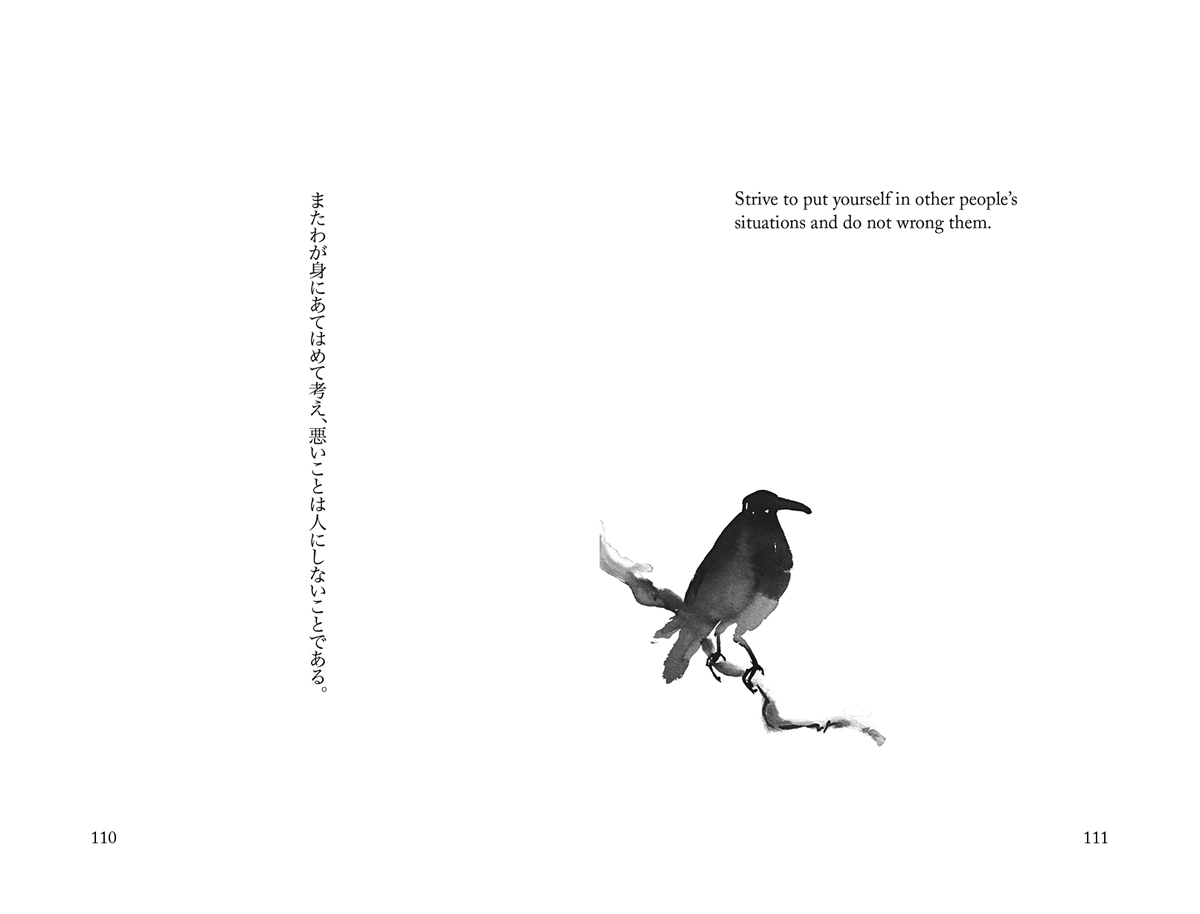 Spread from Above All Waves: Wisdom from Tominaga Nakamoto, the Philosopher Rumored to Have Inspired Bitcoin, pages 110–11. Courtesy Badlands Unlimited.

In 2015, rumors circulated online suggesting the outsider philosopher was the inspiration behind the name of the pseudonymous creator of Bitcoin, Satoshi Nakamoto. Chan knows that, in this book, pursuing this connection “may turn out to be demonstrably false,” but he is interested in the value of a rumor: “What value does it hold beyond its relationship to facts?” Because we know so little about Satoshi Nakamoto, then perhaps the story of Tominaga Nakamoto can, as Chan suggests, “shed light on the intellectual, political, and cultural milieu that would consider him a worthy inspiration for something as radical and provocative as Bitcoin.”

Bitcoin is a moral and ecological disaster, for its repurposing as an instrument of financial speculation and its genuinely catastrophic consumption of electricity. Chan reminds us, though, that Bitcoin is just one, now-corrupted expression of the blockchain, a peer-to-peer technology developed by an amateur from existing tools (much like hip-hop). The reliance on what is already there, in the community and in the self, is an idea of value that I find appealing in Chan’s extrapolation of Tominaga, an act that obviously involves some extrapolation on my part. The line from Tominaga to Satoshi to Chan to me is easier to see in this quote in Above All Waves from security researcher Gwern Branwen: “Satoshi could be anybody. Bitcoin involves no major intellectual breakthroughs of a mathematical/cryptographic kind, so Satoshi need have no credentials in cryptography or be anything but a self-taught programmer!” 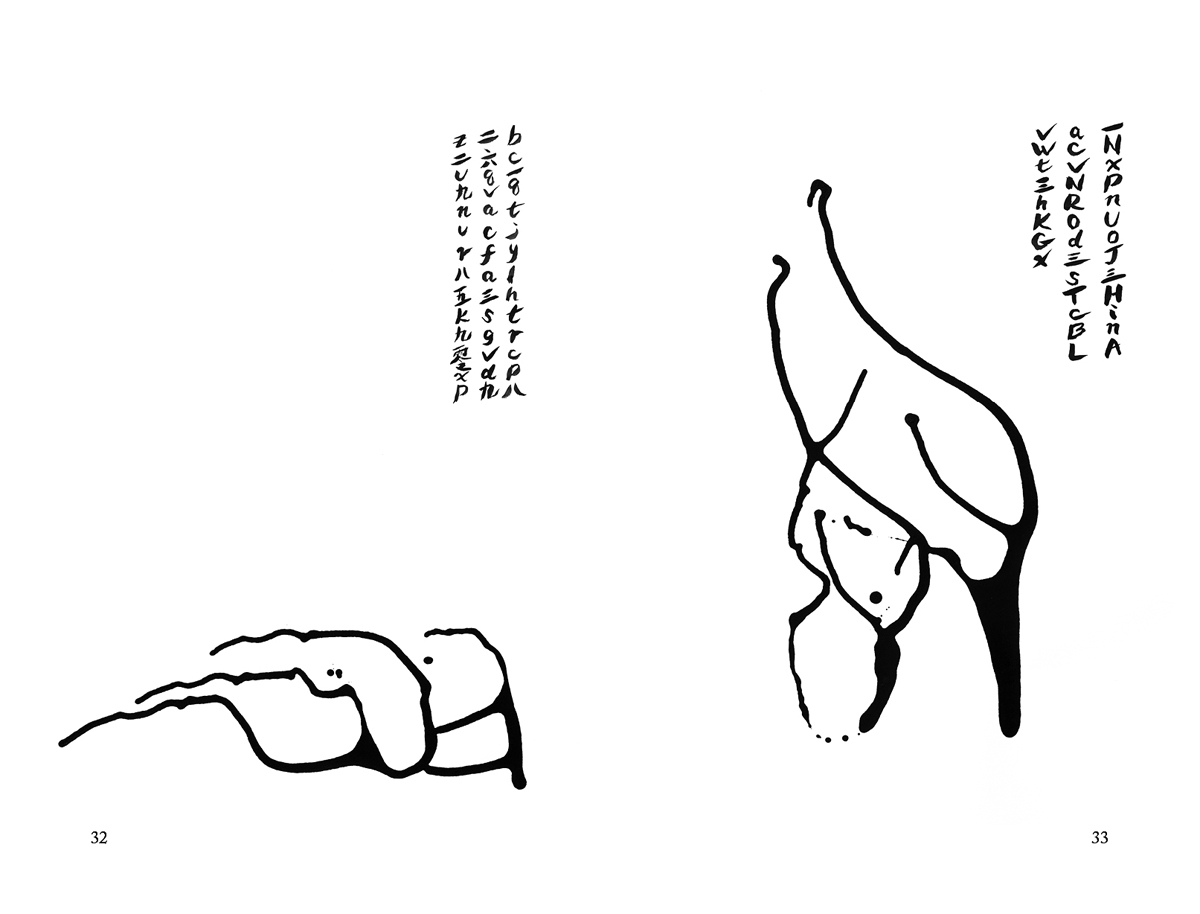 Spread from Above All Waves: Wisdom from Tominaga Nakamoto, the Philosopher Rumored to Have Inspired Bitcoin, pages 32–3. Courtesy Badlands Unlimited.

One of the reasons I find this book vastly appealing is that it aligns with my own political and spiritual positions. A hundred years ago my beliefs might have been called pantheism, or part of the “Mind-Cure Movement.” Now, they could be called radical empiricism or even radical gratitude. For me, God is an inner gold, resident within every person, an energy that carries more than enough guidance for those who listen. Any assertions of authority over that God are illegitimate and violent and must be disregarded. Likewise for Tominaga, to whom all teaching was suspect, larded with the concrete needs of the teacher. “It is the original law of heaven and earth that good things must be done and evil things must not be done, and that doing good is in accord with reason and doing evil is against reason,” he writes. “There is no need to seek the teachings of Confucianism and Buddhism.” 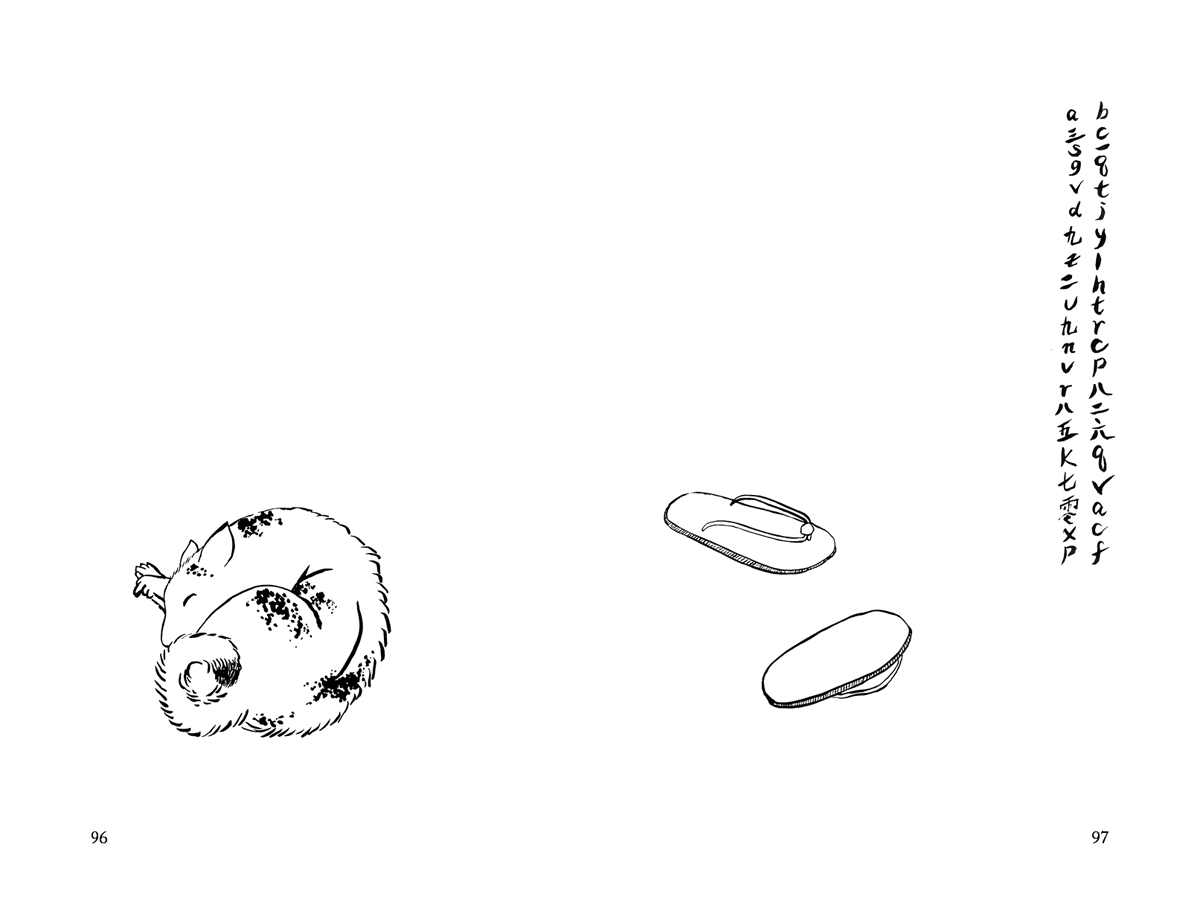 Spread from Above All Waves: Wisdom from Tominaga Nakamoto, the Philosopher Rumored to Have Inspired Bitcoin, pages 96–7. Courtesy Badlands Unlimited.

In 2008, someone named Satoshi took stock of the existing coding tools and figured out a way—without inventing anything new or leveraging any authority, but just by remixing old technological ideas in an unexpected fashion—to make a decentralized network that would be confirmed and reinforced by all the users, with no need of masters. Whether or not Bitcoin became a clown car does not change the egalitarian spirit of the technology, which will likely see its best deployment in some other variation of the blockchain. The ruling class and salesmen are the ones who usually put faith in ideas like “innovation,” a shady word in all instances. Tominaga was suspicious of exactly that kind of idea when he wrote that “we should aspire to be profoundly ordinary in all matters.” Within the seemingly ordinary is the actually divine.

Sasha Frere-Jones is a musician and writer from New York. His memoir, Earlier, will be published by Semiotext(e) in the fall of 2023.