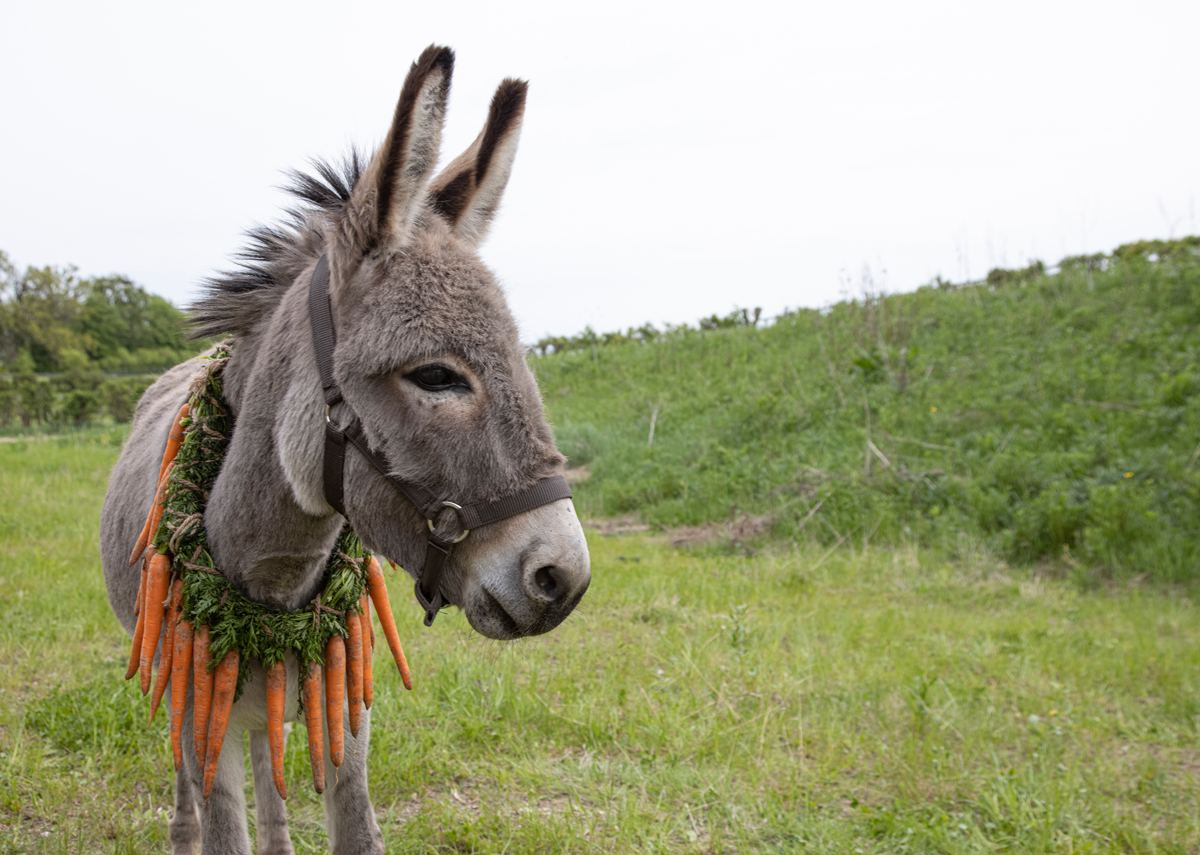 In a memorable piece of donkey writing from 2009, Susan Orlean describes a burro with “teacup-sized hooves” she encountered on a crowded street in Fez as being “donkey-colored,” a detail that illustrates how we humans tend to think of this creature: abstracted, universalized. To us they are all functionally the same, these global workers, the first beast of burden we ever domesticated, the single animal we have most abused throughout the history of our civilizations. They are a collective blank we can conveniently overdetermine with meaning, much as we overload them with cargo to carry; we turn donkeys into symbols everywhere in our cultures. It is fitting, then, that a donkey should be the star of Robert Bresson’s famous, stilted study of cruelty from 1966. And that Jerzy Skolimowski should have chosen, at the suggestion of his cowriter Ewa Piaskowska, to revisit Au hasard Balthazar (the only film, he has said, that ever made him cry) with the apparent aim of making it even sadder—given that his entire filmography, which begins in 1960 and includes titles made in his native Poland as well as Belgium and the UK, is an extended study in the tragic cruelties of the human world, one in which only animals may be innocent, but in which they suffer the most. 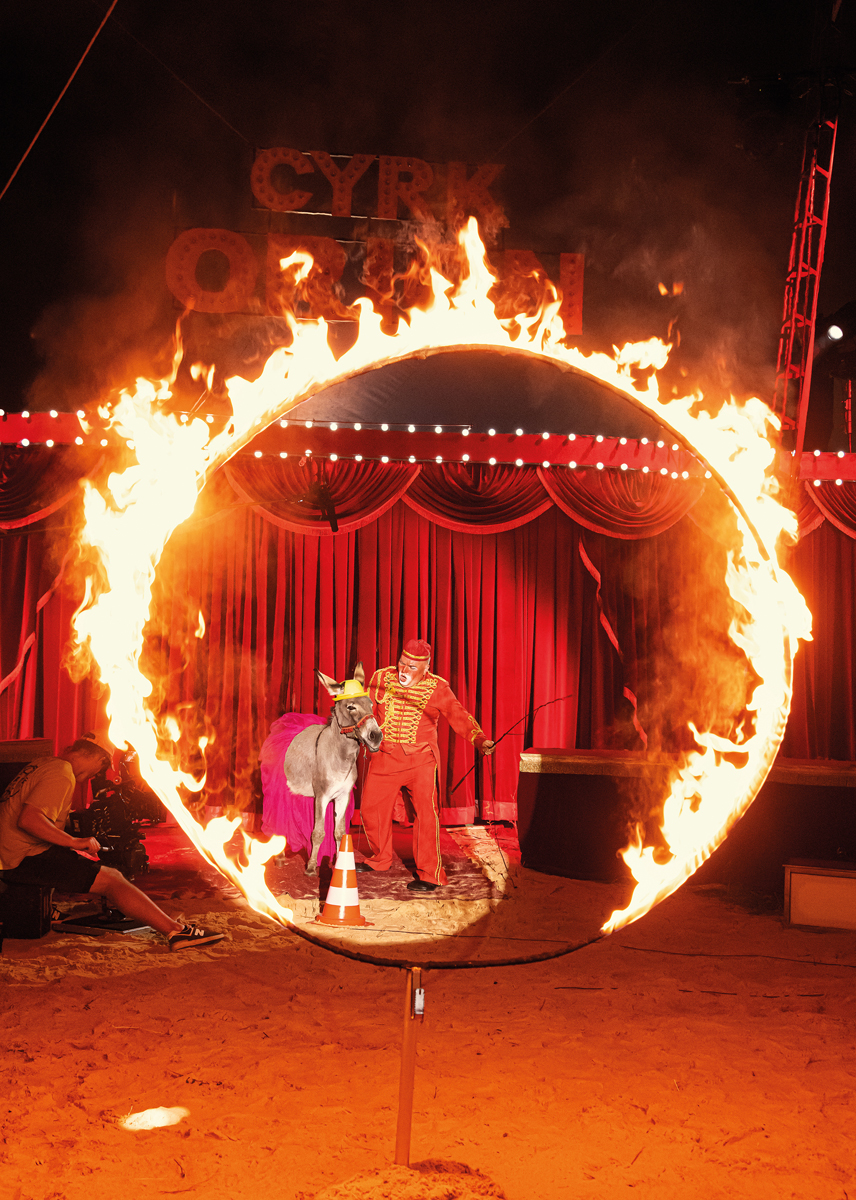 Skolimowski’s updated hero is the eponymous EO (named for the sound of a donkey’s bray), who is a classically donkey-colored donkey of a specifically chosen breed: just like Balthazar, he is a white-masked Sardinian (he is played by six Sardinian asses, Marietta, Tako, Holla, Hettore, Rocco, and Maya, who charmingly vary in degree of pokeable roundness of belly or rascally prominence of haunch). In some scenes, we see a stripe running across his shoulders that intersects with one running down his back—a perfect cross. EO is both performer and laborer at an itinerant Polish circus, but in the film’s opening minutes that circus goes bankrupt and our star gets repossessed. He bawls as only a donkey can as he is ripped from the loving and protective embrace of his adoring stage partner, Magda (Sandra Drzymalska)—stage alias Kasandra—the only human to show him true kindness. 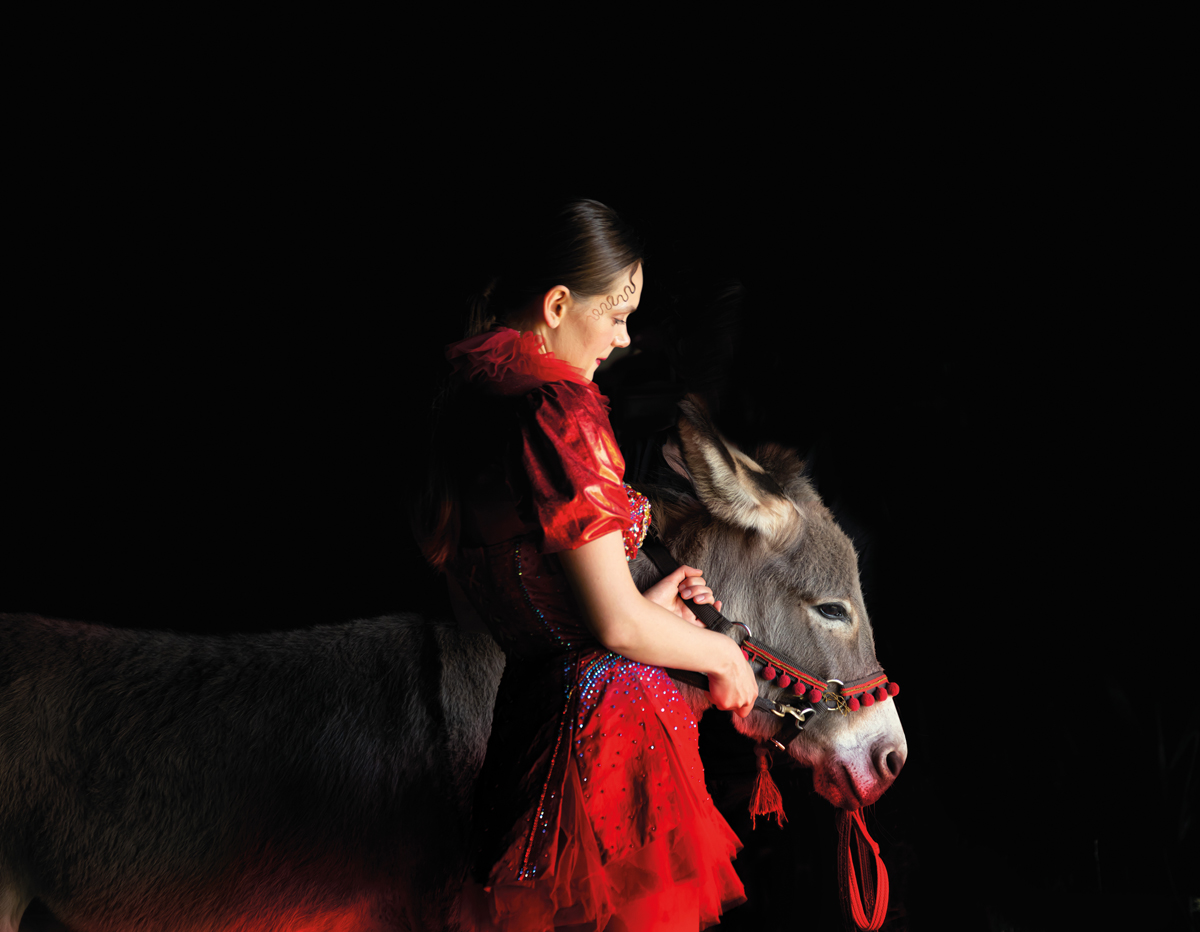 Cruelty arrives early and often in EO. It starts with a scene bathed in red light (the flashing of which seems to signal EO’s memories or dreams; red is the film’s dominant color, a Blaue Rieter–esque blue its moody second). Something terrible has happened—a trick gone wrong, maybe. EO is on his back, his hind hooves helplessly curled in the air; Magda appears to be giving him CPR in between beseeching whispers. He finally manages to stand back up—the notably un-outraged audience applauds. Later that night the young woman visits EO in his stall, languorously caressing him as she soothingly murmurs into his neck. Skolimowski, who dares to imagine the donkey’s inner world, unafraid of intellectual reproaches of anthropomorphic sentimentality, will have EO longingly reenvision such moments throughout the film, Magda’s lilac-painted nails leaving gentle tracks in his gray fur in the warm refuge of his mind. 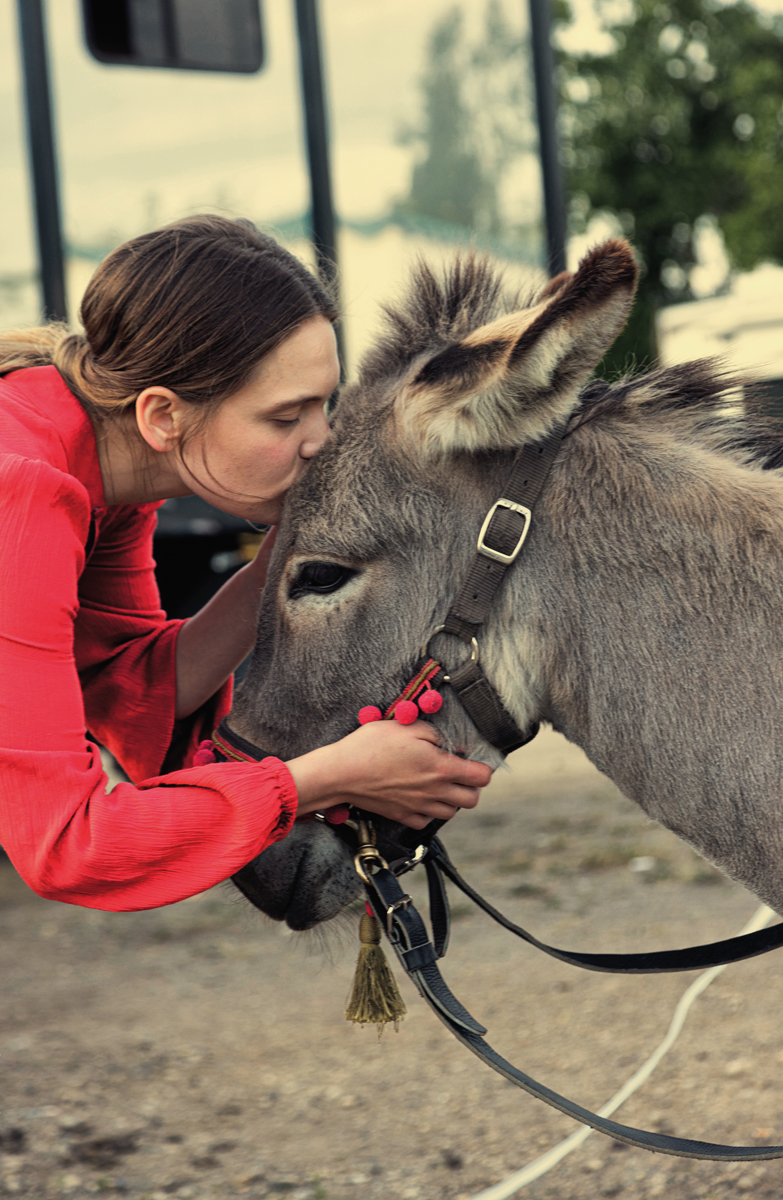 After the repossession, EO is loaded into a trailer and taken to a silly opening for a magnificent stable for glamorous horses, which he patiently observes while comically festooned with a carrot wreath. Here he briefly falls in love with a flighty, white-and-roan-speckled Arabian mare. He has a dream of her running in a scarlet circle, her mane flowing like a river. But then the horse halts and stares into the camera. Suddenly her iris contracts, is limned by white—a very real sign of fear. 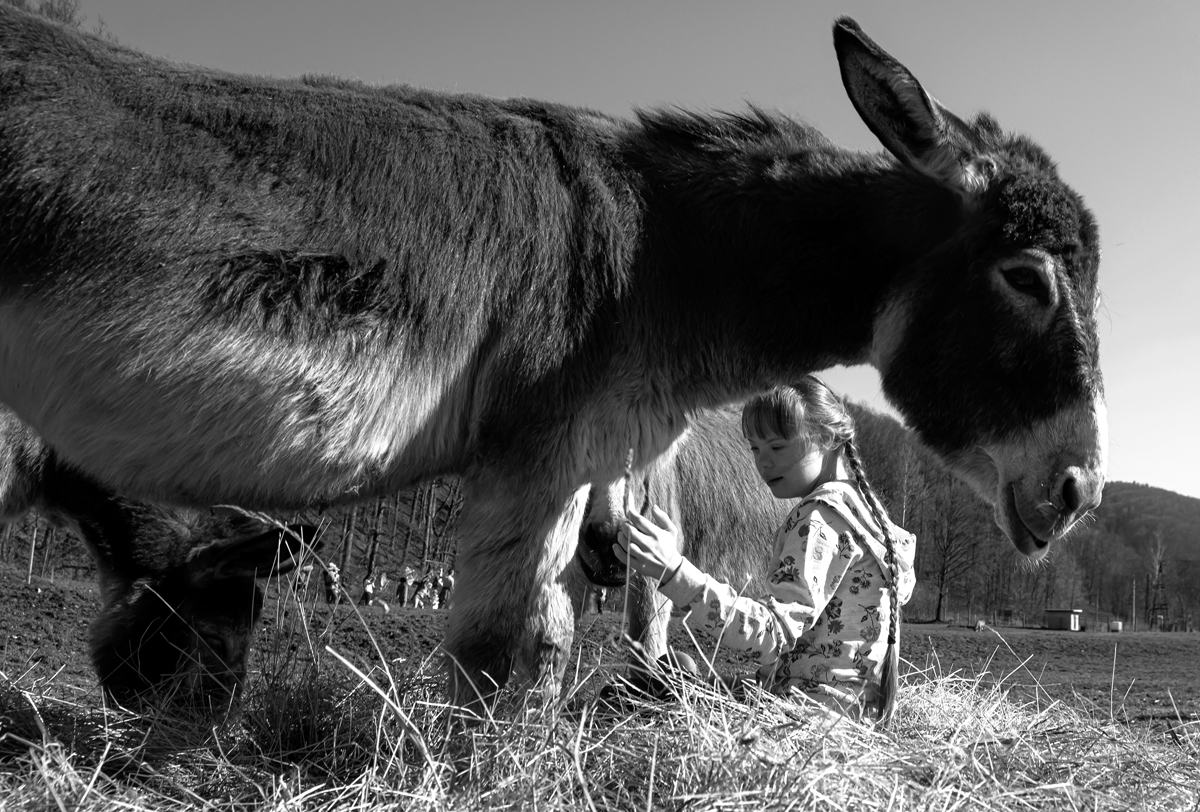 When EO spectacularly botches his job carting hay at the stable, he is next trailered to a donkey rescue that is also a therapeutic riding center for children with disabilities. There, the mother figure who runs the establishment cuddles the kids amid a coffle of somnolent donkeys with heavily lidded, Snuffleupagus-lashed eyes in a depressingly mucky pasture. She reads aloud, improbably, the prologue to a murder-filled nineteenth-century Polish drama. “An old blind harper from the island of Scio came to the shores of the Aegean Sea, and having heard the breaking waves with a great roar, he thought that the noise came from the noise of the people . . . So he sang to the sea from the empty shore,” the passage goes. The woman stops reading. “What’s next?” she asks. “You’d like to know?” 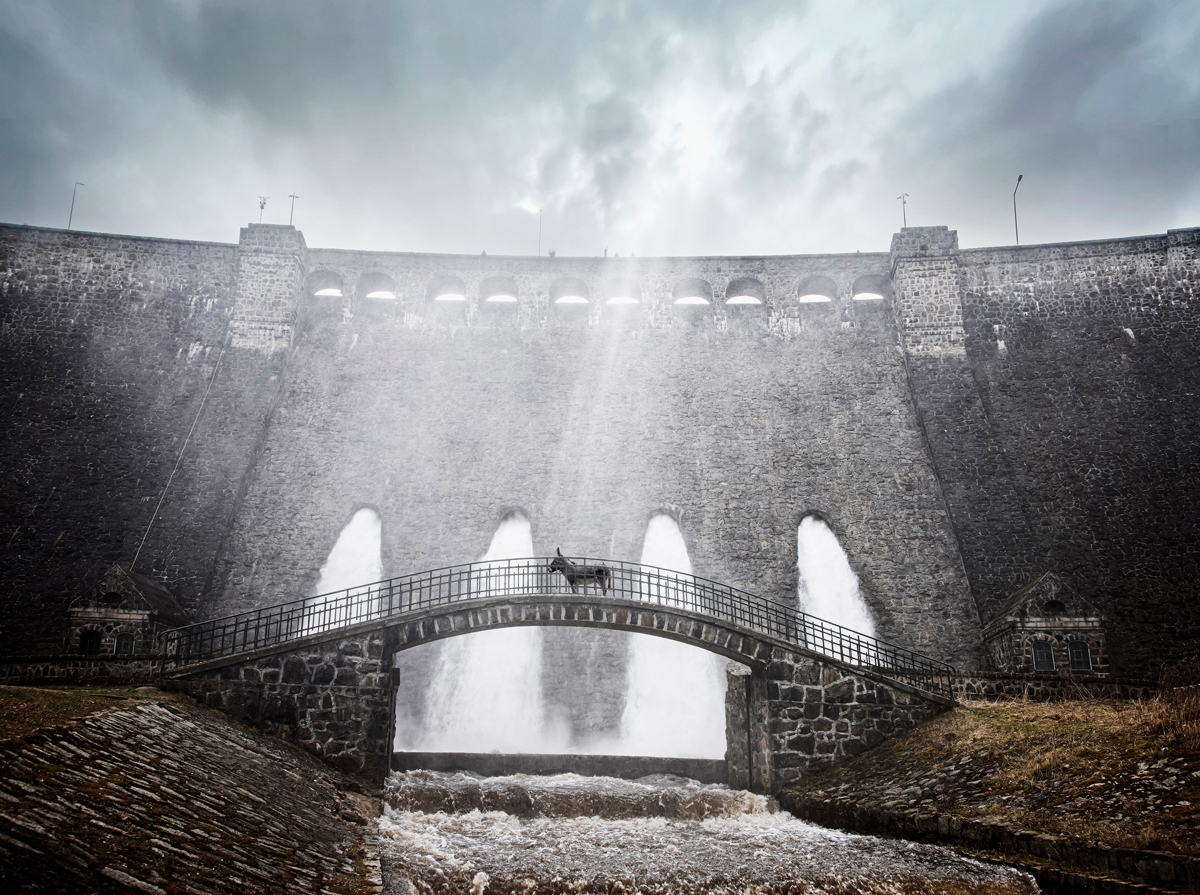 What’s next? You’d like to know? might be the choral response to the narrative structure of this transcontinental donkey odyssey, which progresses through nine more stanzas, for a total of twelve (separated by some surreal interludes, such as EO trotting down an endless, sodium-vapor-lit hall swooping with bats). Each episode leads into the next abruptly, absurdly, right up until poor EO’s inevitable end, when we no longer have to guess what’s next, as the metallic hiss of industrial death that is the film’s last sound leaves no room for hope. 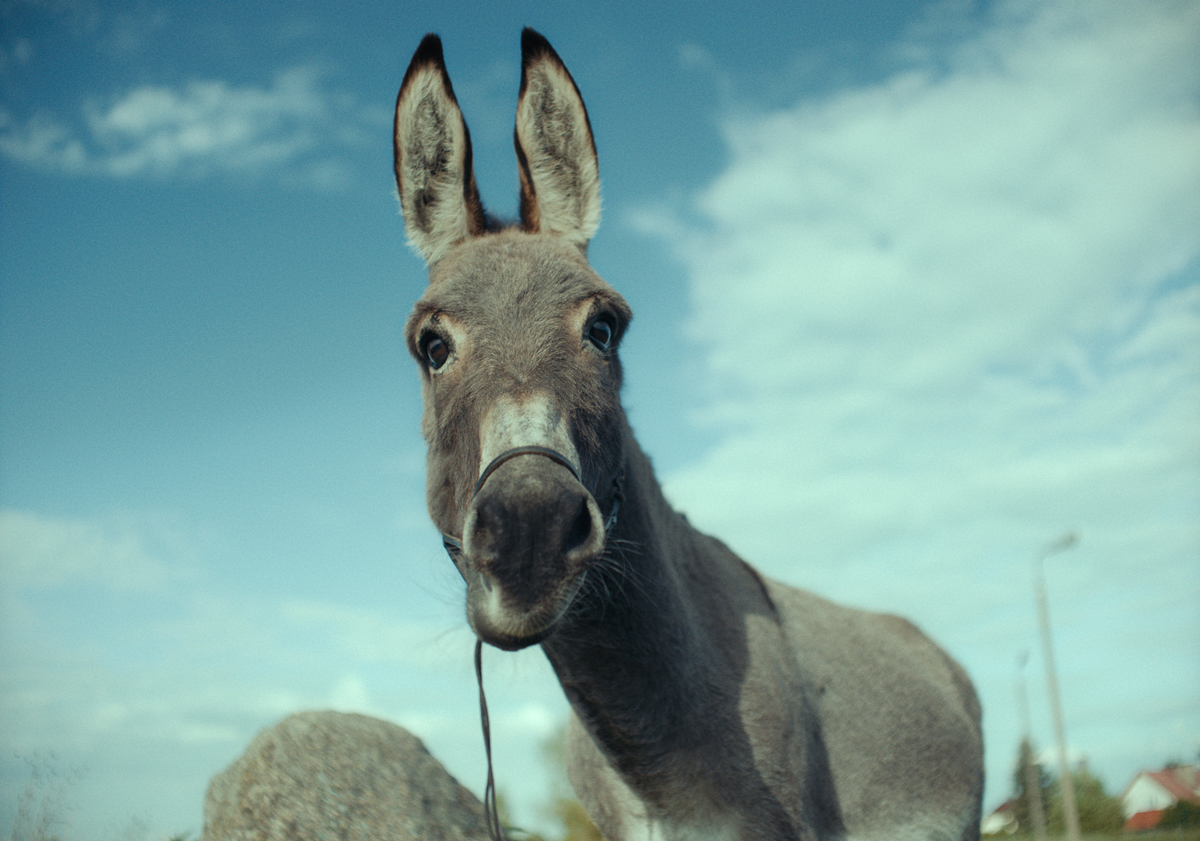 Skolimowski said he wanted this film to be about, and crafted from, emotion. He, cinematographer Michał Dymek, and composer Paweł Mykietyn utilize a full arsenal to achieve this. The score is typically Skolimowskian—an electrifying presence. Orchestral, electronic, and death metal tracks add creep and tension. EO’s decisions to leave a given situation (always in pursuit of his beloved Magda) tend to be punctuated by comic sounds, like a bellow of menacingly inquisitive horns. The images are jittery, sometimes over-the-top; they glare with artifacts of light, disorient with fields of blur. Horses and water may run backward and infrared-viewed windmills tip, Antichrist-like, upside down. But trumping all these embellishments are the equine actors—the finest performers that Skolimowski, who has worked with Jean-Pierre Léaud, Susannah York, Jeremy Irons, and Vincent Gallo, has ever directed. The Sardinians are deeply expressive, reacting with sensitive curiosity and poignant affect to the strange situations in which they find themselves: EO honking with alarm at an aquarium in a pet shop window; EO extending his luxuriously long ears to their maximum height, rounding his eyes, as he takes in an absurdly competitive local soccer game. When Magda’s lips quiver in despair when EO is taken from her, it is sad. But when EO cowers at the slaughterhouse in the film’s final moments, tail tucked between his hind legs, ears pinned back, terrified, it is gut-wrenching—the cruelest moment in cinema I have ever seen. 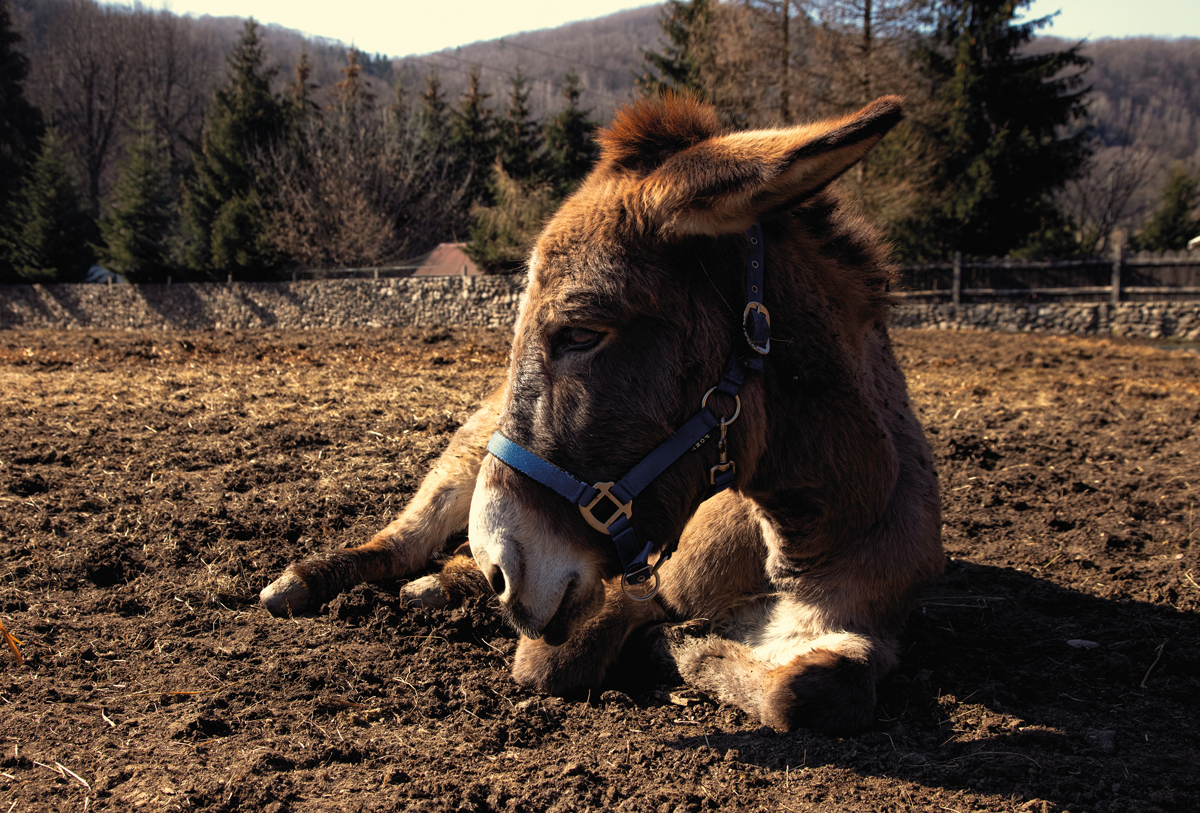 In a 1984 review for Libération, Serge Daney writes that Skolimowski’s Success Is the Best Revenge is like “a cinema version of a high-speed train, the ‘Skolimowski Express,’ and the wide-eyed viewer watching it suddenly realizes that it isn’t certain that this train will stop very long for him to hop on.” EO is kind of like that—a film so bursting in every regard I could hardly stand, in some moments, to “hop on.” Maybe Skolimowski, who is in his mid-eighties, knows this could well be his last express. It’s as if he threw everything he had into this film, in a fit of rage, like the blind singer in the donkey-rescue proprietor’s story who ends up furiously throwing his harp into the indifferent waves—EO as one final rebuke to the entire, unfeeling world. It is painfully successful as such: to me, this is the most feeling film Skolimowski has ever made. It is surely the one burned most indelibly into my memory.