From 1975 Stuttgart: a new release is the first live album of the influential German group. 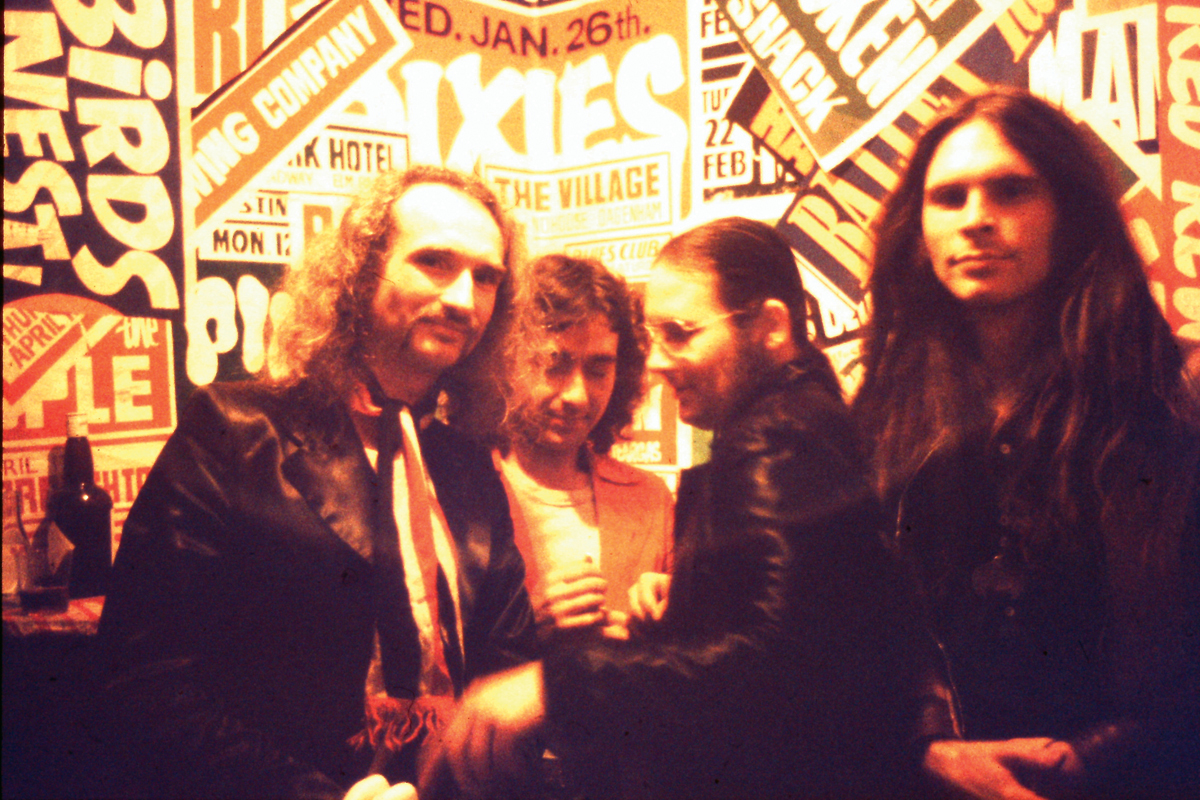 CAN on tour. Courtesy Mute and Spoon Records.

CAN: Live in Stuttgart 1975, by CAN, Mute and Spoon Records

We’ve been haunted by the specter of the rock band for so long it is easy to forget that, in 1966, rock was barely itself. After returning from a trip to New York that year, Cologne musician Irmin Schmidt decided to form a group that could use the skills he’d learned under academic musicians like Karlheinz Stockhausen to exploit the innovations of rock music. As he put it, “I thought, ‘I’m a contemporary composer, I should take into consideration the history of what had developed in the States.’ ” Schmidt knew this musical development was African in origin, and that it encompassed “blues, jazz, and, finally, rock.” What CAN did widened the possibilities of their sources and changed what it meant to be a rock band. They featured two of the least-direct singers in the history of popular music—the very loud American whisperer Malcolm Mooney, and then Damo Suzuki, Japan’s fittest imp of fraud—and developed a kind of textured repetition that blends today with almost any genre, free of senescence.

If CAN records are alien to you, start anywhere and listen to drummer Jaki Liebezeit—his playing defines the band. When Schmidt first heard Liebezeit in 1967, the drummer was working in a free jazz ensemble. Liebezeit, it turned out, was one of the great straight-time musicians, able to create momentum and fear and stability all by himself. He calibrated his set in a way that didn’t align with the dominant habits of drummers in rock or jazz; each drum was tuned either lower or higher than the norm, and his snare didn’t have the papery texture most commonly heard. As described in Jono Podmore’s Jaki Liebezeit: The Life, Theory and Practice of a Master Drummer, Liebezeit also had a system for playing two-stroke figures, which he notated as “dashes.” “Although the second stroke of a dash can be almost identical, it can never be louder than the first.” This reads as oddly strict (it is), but it also explains the pull of “Vitamin C,” the band’s best-known song (and heard in the TV series The Get Down). Liebezeit’s rhythm bed contains its own echo, relying on an exchange of bass drum and snare double hits that makes it sound as if the set were being run through a delay pedal. 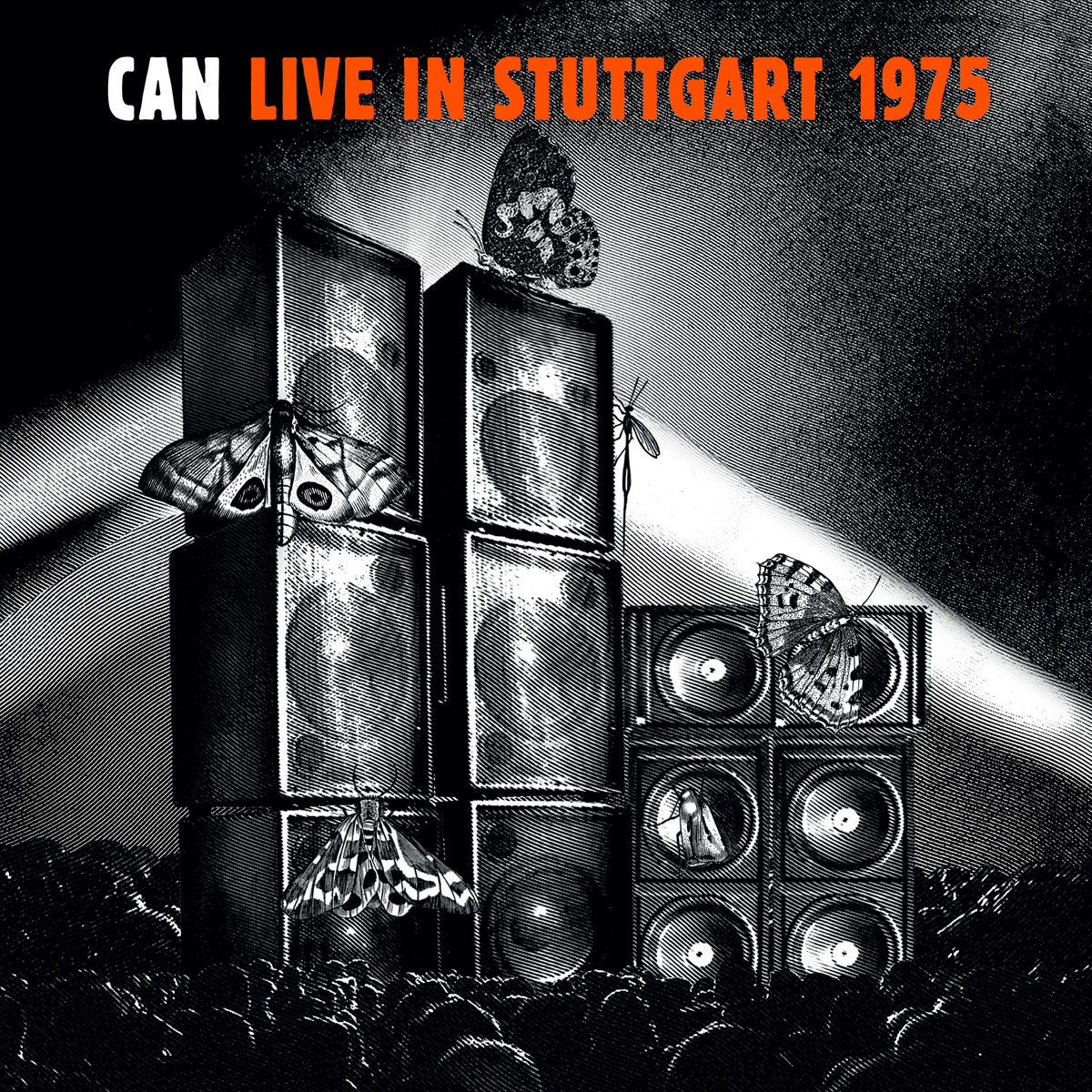 CAN’s new Live in Stuttgart 1975 kicks off a series of archival releases from the Mute and Spoon partnership, facilitated in large part by a fan and recordist named Andrew Hall, who started taping the band in early 1973. Not all of the tapes in this series were made by Hall—the Stuttgart concert wasn’t—but it is his library that provides the source documents for this expansion of the CAN catalog. The implausible fact is that CAN has never officially released a live album, not until now. This was down to bad luck and technical mishaps rather than an active group decision. 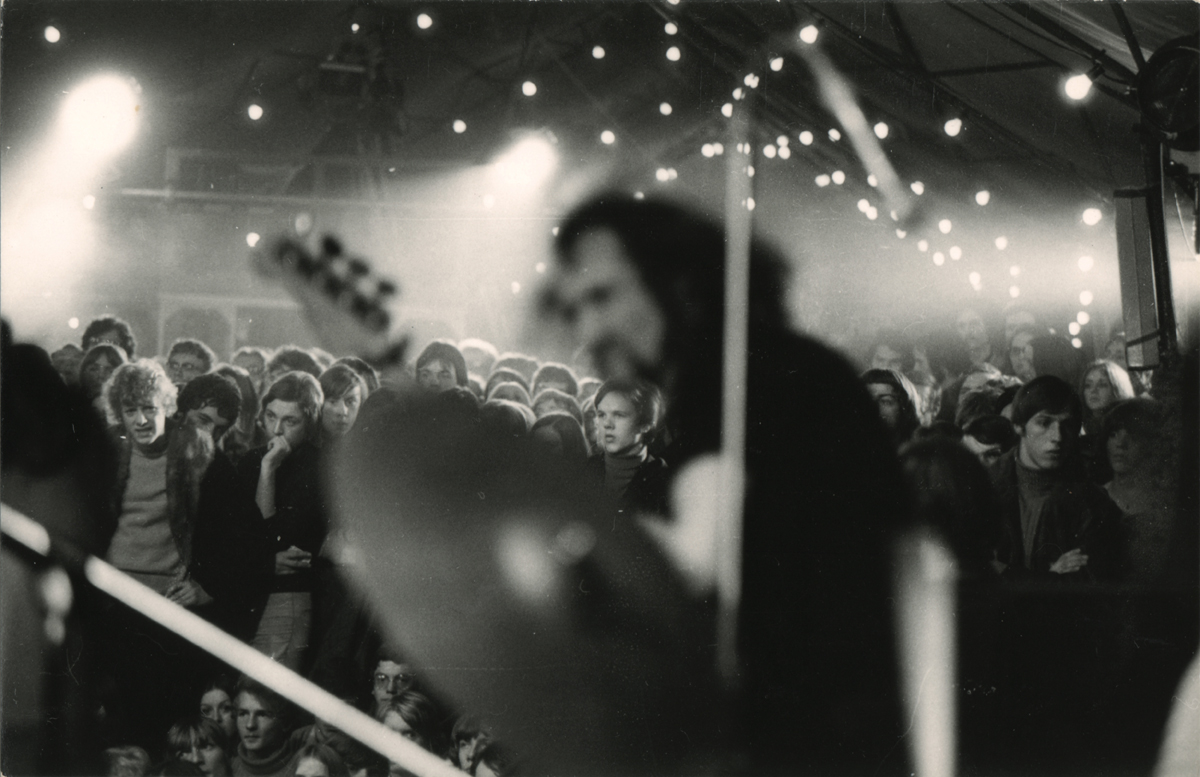 CAN live in Soest, 1970. Courtesy Mute and Spoon Records.

A collective that created everything together, with no exceptions, CAN improvised for hours in the studio (first a castle, and then a converted cinema in Cologne) to create material. The lion’s share of their songs were single phrase vamps that ambled in and out of phases. Live, they stuck with the vamps but dispensed with song form and plans, presenting something very much like the raw material they built studio records from.

“Never was there a CAN concert with a set arranged before,” Schmidt told me by phone from his home in France in April. Sometimes songs like “Vitamin C” or “Dizzy Dizzy” or “Bel Air” would pop up, but “it was a quotation, never a reproduction,” he clarified. This practice puts the band in line with the Grateful Dead, in that the point of the live shows was to respond to the energy of their surroundings rather than reproduce recorded songs. But CAN went further, playing what felt right, often using no recognizable motifs.

After Suzuki left CAN in 1973, vocals took a minor role in the band’s studio recordings and are absent from most of the live shows. Without someone trying to slot in lyrics, the musicians were able to range as far as they wanted. The band was perfectly comfortable clearing their throats for half an hour or so while looking for the right mood.

The five pieces on Stuttgart 1975 are titled with German numbers. “Eins” and “Zwei” are a bit high-school gymnasium in temperament, the sound of talented students warming up. That’s half an hour gone. Then, for “Drei,” Liebezeit bears down on his hi-hats and raises the tempo. Here, he recalls drummer Al Foster on Miles Davis’s On the Corner, who created a hopped up and fractured take on James Brown’s funk. With Liebezeit in this mood, Holger Czukay’s bass-playing becomes more mechanical and rackety, less in search of a center. Schmidt plays brief bursts on the organ and guitarist Michael Karoli lets a few chords ring. There is a lot of empty space here, and little you would call soloing. 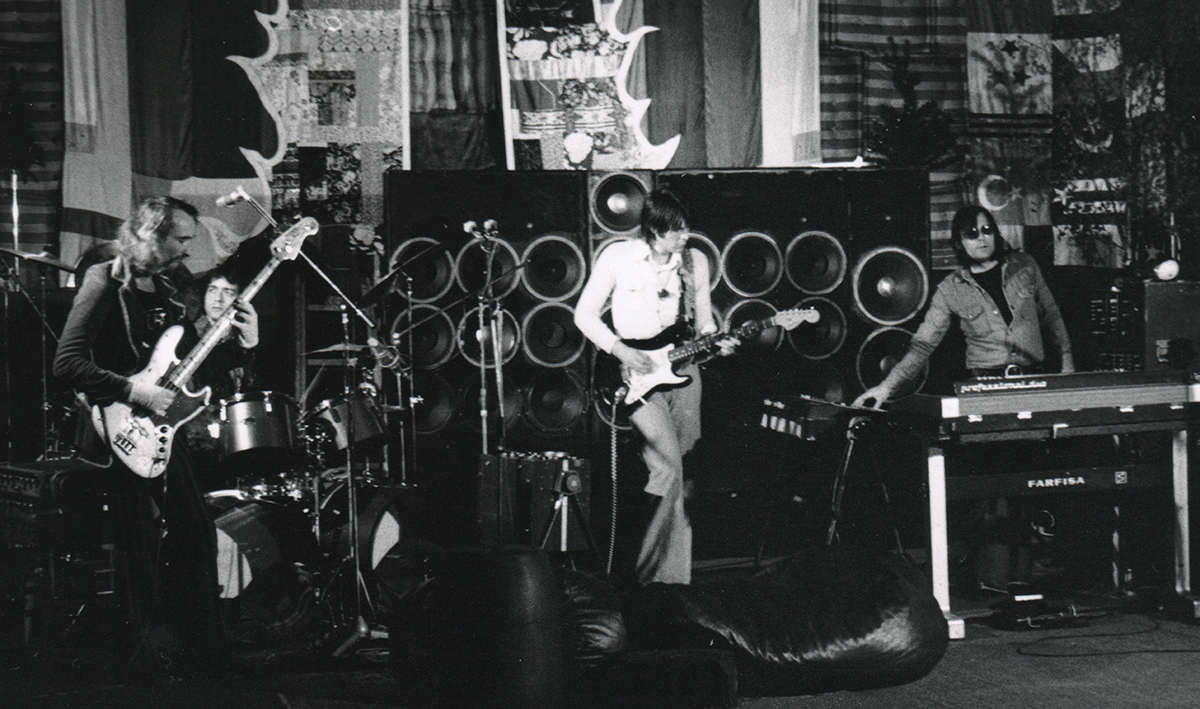 CAN in the studio. Courtesy Mute and Spoon Records.

Which leads to what people talk about when they talk about jamming. There’s a weirdly dismissive and familiar discussion that divides spontaneous creations into improvisations and jams. The implication is that jams represent a low-investment run-through of preexisting scales and patterns and that improvisations are somehow more elevated journeys. This comes, one can only assume, from the fact that playing music in straight time and repeating motifs makes it easier to track. It has nothing to do with how a group listens to itself and views time, though. The skeptical listener could say that CAN was just jamming, and it would be a bit like saying Robert Mitchum underacted. CAN was precisely aware of what they did and how elastic and rich their repetition was. It is not some kind of magical mistake that you can listen to them for hours and not feel enervated or bored. They were listening to themselves harder than we ever will.

The final ten minutes of “Drei” is an astral stomp, with Schmidt pushing his synthesizer into R2-D2 territory. In “Vier,” the simple figures from “Zwei” have reappeared, awakened. The musicians are hearing one another fully; Schmidt plays big washy chords when Czukay and Karoli take up more space, and the whole band forms a thickness. Liebezeit then just multiplies himself and storms on for five chaotic and sublime minutes.

“Fünf” is a twisted coda, Schmidt leaning heavily into his organ while Liebezeit rails around like a marching-band refugee. It’s evil-lair music chopped into dynamically different sections. It feels as if the next two hours—had there been two more after this limbering up—would have been pure magic. But then, this archival series has only just begun.