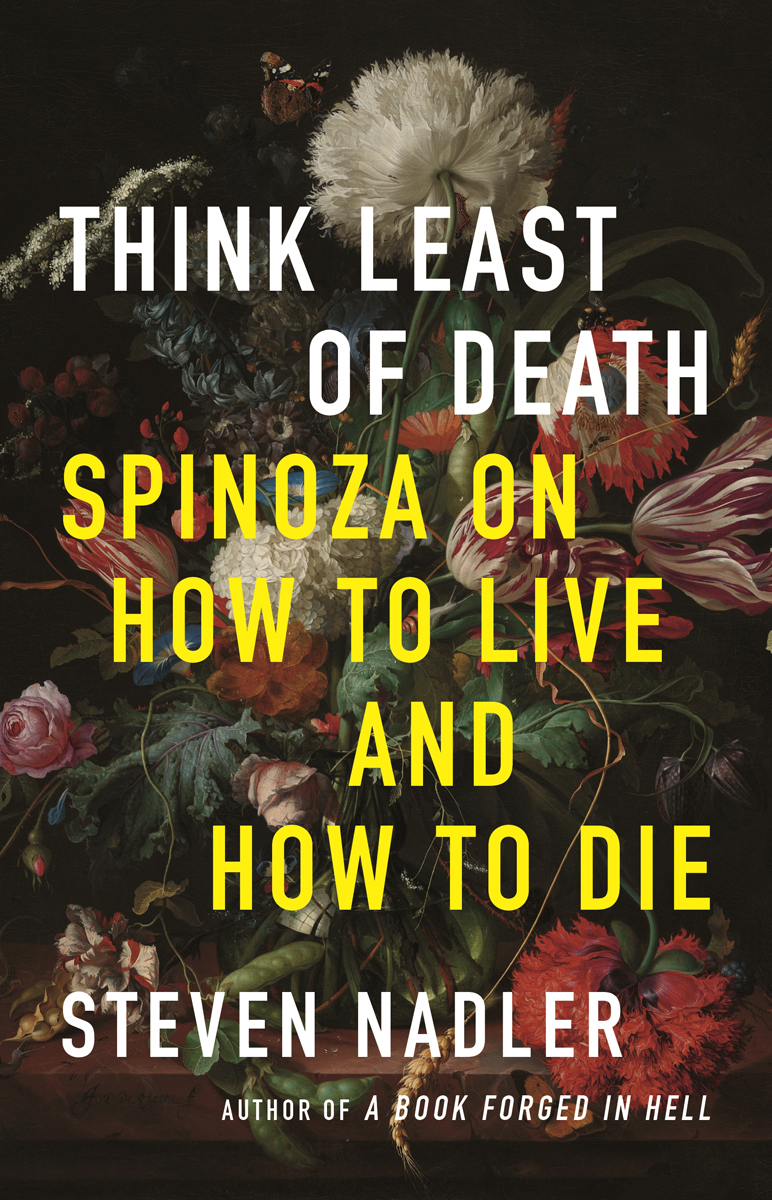 Think Least of Death: Spinoza on How to Live and How to Die, by Steven Nadler, Princeton University Press, 234 pages, $17.95

It’s not easy, living. Our human existence is an ongoing experience of what Baruch Spinoza called servitudo (bondage): we are constantly, despite ourselves and our best efforts, at the mercy of forces greater than us, subject to events and encounters that cause emotions we’d rather not feel. As the great British thinker Kate Bush once put it, “Just being alive—it can really hurt.”

In Spinoza’s philosophy, humans are tiny, finite parts of an infinite substance. “The force whereby a man persists in existing is limited,” he writes, “and infinitely surpassed by the power of external causes.” These external causes are the source of our human misery, the origin of the emotions we wish we didn’t have.

Imagine, just for a moment, that you could choose with perfect reason which encounters to have and which to avoid. If our “bondage” to our emotions consists in our inability to choose which emotions to experience, a perfectly rational individual who could avoid all unpleasant encounters and causes would presumably be the model of freedom. Spinoza seems to have such a model actor in mind in Part IV of his magnum opus, the Ethics; the final eight of Part IV’s seventy-three propositions describe this “free person” (homo liber).

Homo liber, and the eight propositions of the Ethics in which it is the guest star, are the subject of philosophy professor Steven Nadler’s Think Least of Death: Spinoza on How to Live and How to Die, soon out in paperback. This is Nadler’s fifth monograph on the long-condemned, often misunderstood Dutchman, and like his previous one, 2011’s A Book Forged in Hell, it aims to serve as a primer for a general audience. Forged in Hell explored the Tractatus Theologico-Politicus, Spinoza’s most scandalous book; Think Least of Death focuses on his most puzzling and mysterious tract. Nadler presents the free person as the core and highest aim of Spinoza’s philosophy, and after briefly grounding the concept in Spinoza’s metaphysics, spends most of the short book exploring what kind of person a homo liber would be and how they would act, in chapters with straightforward titles like “Fortitude,” “Honesty,” and “Suicide.”

It’s an open question among Spinozists whether homo liber is intended as a thought exercise or an actually attainable goal. As Nadler admits in a footnote, proposition 68 of Part IV “might be taken to indicate that the free person is an impossible ideal”; he rejects this reading, insisting instead that “Spinoza’s goal is to get us to see that the life of the free person is the right way of living and the best life for a human being.” But this is, ultimately, a secondary question, because what’s clear in Spinoza’s writing is that the path to freedom is immensely difficult, that our individual capacities for walking that path vary greatly, and that only a select few will reach the final stretch, whether or not the ultimate goal is hypothetically attainable.

As a thought exercise, homo liber offers a useful model, and it’s hard to argue with the notion that a life free from unwanted emotions is a desirable ideal. But where does that leave those who lack the ideal capacity for rationality, and those who, for whatever reason, embrace the ideal but can’t realize it? It doesn’t take a metaphysician to see that many are constrained in the choice of a better life. What does ethics offer to those of us who can reason our way to an understanding of what the ideal life might look like, but ultimately lack the power to make that life for ourselves? Those who, as Spinoza puts it in a memorable formulation borrowed from Ovid, are “often compelled, although they see the better course, to pursue the worse”?

The Ethics is a dense and complicated text, and there is every justification for selecting a single part of it, or even a single concept, to elaborate on, which Nadler does well. Despite its orientation to a general audience, the book has a strong critical apparatus and offers an effective survey of the philosophical and interpretive issues at stake. But the attempt to make homo liber a metonym for Spinoza’s ethical philosophy as a whole does both Nadler and the Ethics a disservice, reducing the latter to a morality that seeks external, objective judgments. “Should [less free individuals] also be expected to act honestly without exception?” Nadler asks. But expected by whom? The only judgments in question here are our own. The Ethics doesn’t end with Part IV, and in fact, Part V is titled “Of the Power of the Intellect, or Of Human Freedom.” The crescendo of Spinoza’s philosophy of freedom unfolds in this final part, expressed through his conception of “the intellectual love of God” (amor Dei intellectualis). Detached from the rest of the Ethics, Spinoza’s joyous, life-affirming vision becomes an atheistic, tautological Calvinism: “Some individuals excel at this striving for rational virtue,” Nadler concludes, “namely, those who are free and who live according to the adequate ideas of reason.” How we get there remains a bit of a mystery, as does the fate of those who can’t find the way.

In a deterministic metaphysics like Spinoza’s there will always be things that just happen to us, things that just are, things that can’t be otherwise and can’t not be. What then? What do ideals offer us in the face of the inevitable? What good does the model of the free person do those of us left in the dust by history, by economics, by our own stupid brains—by every avatar of Spinoza’s necessity? How, at last, do we square the ethical circle of self-improvement with the metaphysics of determination? The task of an ethics is not to help us choose, but rather to help us live with the things we can’t change or control. There’s a lot of room in Spinoza’s philosophy for learning to live better: reason teaches us which of the things we encounter or perceive are the actual cause of our sorrow or grief, and which only incidental to it; in the process we suffer less in the face of experiences we can’t avoid. This is precisely what Spinoza seems to say in proposition 6 of Part V: “Insofar as the mind understands all things as governed by necessity, to that extent it has greater power over emotions, i.e., it is less passive in respect of them.” The freedom Spinoza describes in the final part of the Ethics doesn’t depend on the attainment of an ideal, but on the understanding of necessity.

An apostate yeshiva boy, Spinoza surely knew one of the Talmud’s most famous injunctions: “You are not obligated to complete the work, but neither are you free to desist from it” (Pirkei Avot 2:21). The improvement of the self is a slow and gradual process with many hindrances and barriers, but it’s not really a matter of choice: shit happens, and we’re left to understand it as best we can. The questions ask themselves. Maimonides, Spinoza’s most important influence in his youth, and certainly his primary Jewish interlocutor, also saw the value of self-improvement in the process, not the goal. In the introduction to his Guide of the Perplexed, Maimonides writes that rational knowledge is like a flash of light: sometimes it flashes for longer, sometimes more briefly, sometimes it illuminates more or less of the world around us. Only the greatest among us will ever find the light switch; the rest of us would do better to try and memorize the room when the light flashes, so that we bump into sharp edges a little less often in the dark.

FT isn’t a real person, but that doesn’t stop him from having a lot of opinions. His ongoing commentary on Spinoza’s Ethics can be found on Patreon.