A look back at the work of the early internet-art collective. 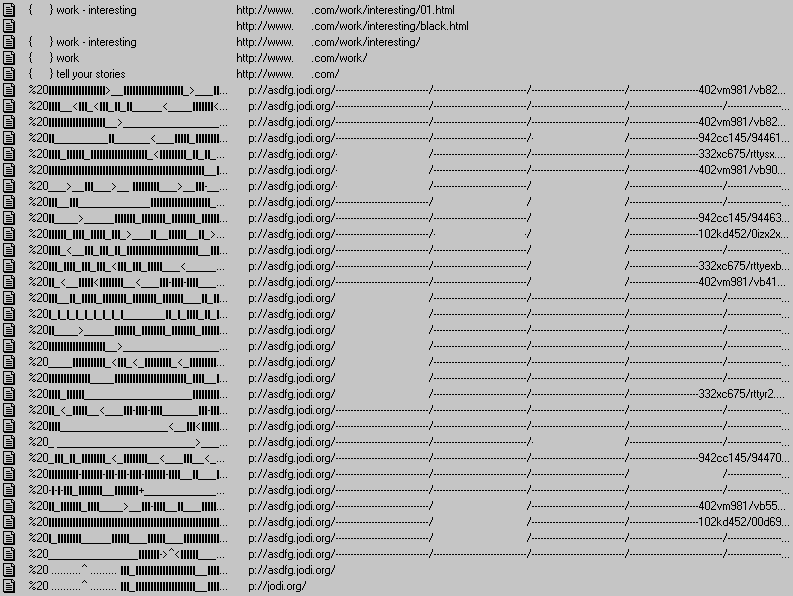 In the disorienting interval of our pandemic confinement, museums, galleries, and other art organizations have responded to the shuttering of their brick-and-mortar venues by rushing to the internet and busily posting photos, streaming videos, holding Instagram Live chats, and running Zoom lectures. These offerings fill our feeds like advertisements for a future that has yet to be determined, makeshift placeholders for the public eye. What this uploading frenzy reveals is that the art world in 2020 imagines the internet much in the same way entertainment companies do, as a convenient mechanism for providing content to a dispersed audience. In this, museums and media conglomerates alike attempt to extend the twentieth-century model of centralized broadcasting as far as they can into the millennium, with minor interactive elements such as sharing, likes, and comments filigreeing their vast and variously monetized showcases of shovelware.

Two decades ago, when the World Wide Web was just beginning to become commercialized, online artists concerned themselves more with the new formal properties of the internet than its meager content, then only fitfully user-generated and as-yet unorganized by the dominance of Google’s search algorithms. The audacious early work of Netherlands-based collective JODI exemplifies this moment. Their quasi-anonymous moniker derives from the identities of its two members, Joan Heemskerk and Dirk Paesmans, who began collaborating in 1995; by the decade’s end, JODI would become one of the most recognizable names of the first generation of internet art. 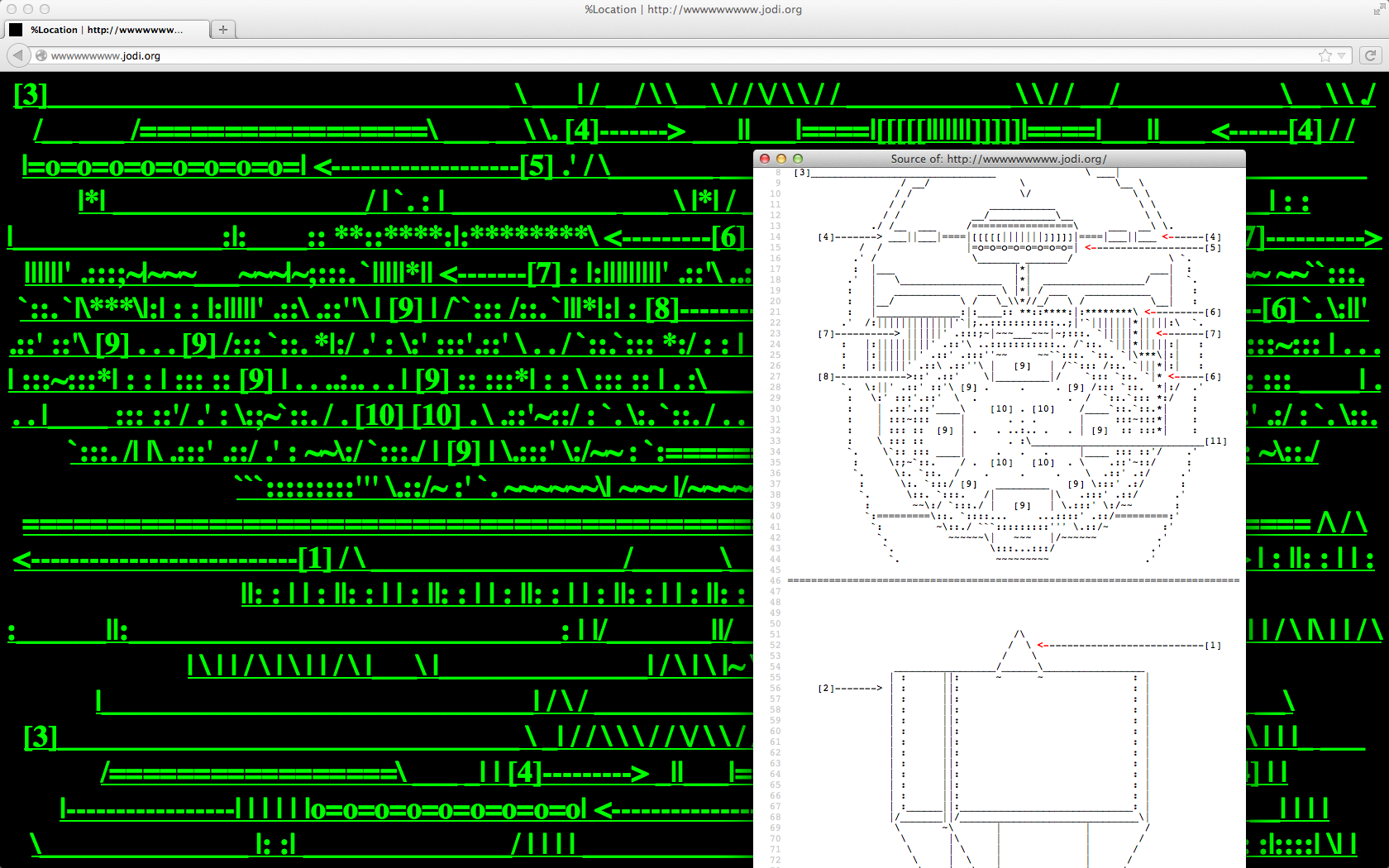 One of their most infamous pieces from that period, located at http://wwwwwwwww.jodi.org (1995), offers a perverse form-content reversal on its first page, which appears to the reader as nothing but a green garble of numerals and punctuation marks. View that page’s source, however, and you will discover that this seemingly nonsensical pattern has been generated by inserting ASCII drawings of hydrogen bomb blueprints into the body of the code, forcing the browser to misread the characters comprising these images as if they were lines of HTML. If the goal of the internet is to facilitate the spread of information, the transformation of an ordered diagram into a disordered jumble of text immediately blocks communication’s path. “The work we make is not politically oriented,” Heemskerk told interviewer Josephine Bosma on the Nettime listserv in 1997, “except that it stands in the net like a brick.” 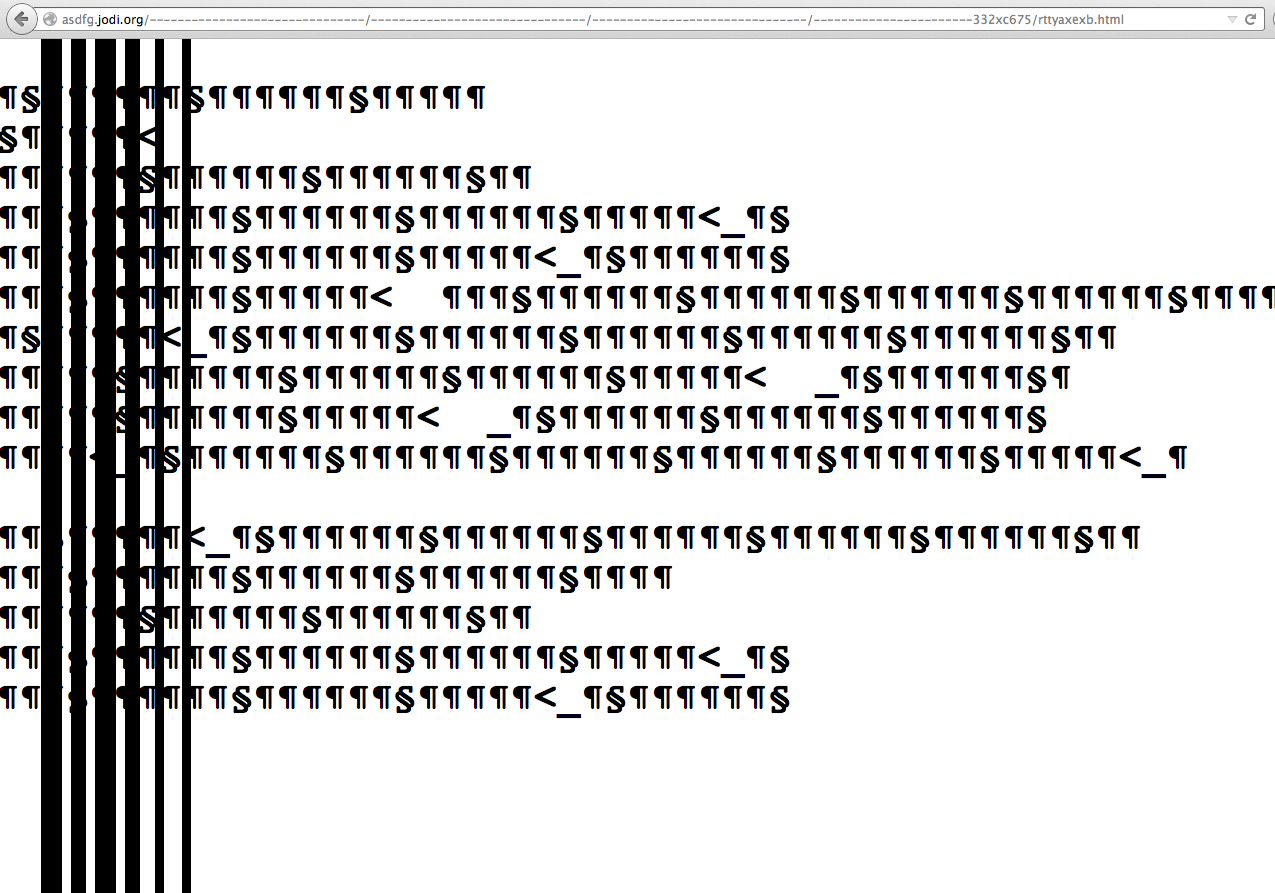 Subsequent JODI projects embody this clash between the page and its underlying code in websites that appear to struggle against their own construction, exemplified in their piece http://asdfg.jodi.org (1999), whose subdomain references the left-hand layout of a US computer keyboard. Clicking on the URL loads a never-ending series of silent pages filled with overlapping, strobing patterns of black-and-white text. These abstractions jitter rhythmically up and down and side-to-side in response to the automated movements of each page’s scrollbars; each page stays on screen for about twenty seconds before redirecting to another sibling page, seeming to give some agency to the browser itself as the URL moves from path to path. If JODI’s H-bomb joke plays with the legacy of conceptual art, in that it stresses the centrality of an a priori generative text for its meaning, the spasmodic pages that reside on the asdfg subdomain evoke instead the optical-perceptual processes of experimental film and analog video art, in which an individual work’s aesthetic force relies on its existence as a temporal event, an experience happening in real time for the viewer; the containment of the page’s moving images within the proscenium-like browser frame subtly encourages today’s Netflix-trained web-surfer to lean back into binge-watch mode. 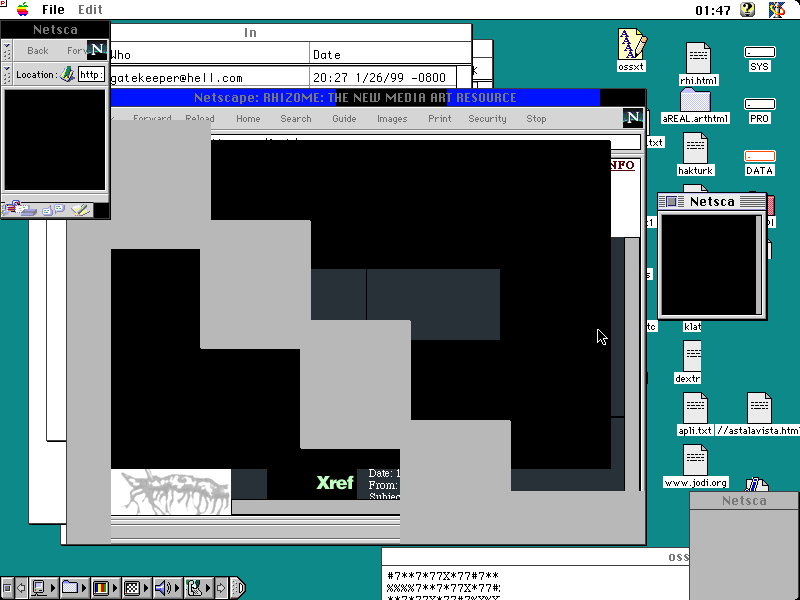 This is perhaps why one of JODI’s most enduring works, a minimal site located at http://oss.jodi.org (1998), remains unsettling. Once again, JODI encoded this page to make it seem as if it had a mind of its own, but in a manner that violently transforms the normal configuration of a web browser. The page initially loads as a featureless expanse of black background, then suddenly conjures a swarm of tiny pop-up windows, each little square careening haphazardly across the breadth and width of the desktop, brazenly ignoring the browser’s normal boundaries and halting nearly all actions if the user cannot determine how to stop the onslaught. There’s also a bit of topical reference: by the turn of the millennium, one of the most pernicious annoyances of the internet were pop-up ads, appearing most dramatically via what would come to be known as the “pornado” effect of sex-site advertisements. For this reason, oss.jodi.org will not always function properly today, since many browsers are set to block pop-ups, and such intrusions cannot occur at all when browsing on a phone or tablet OS. 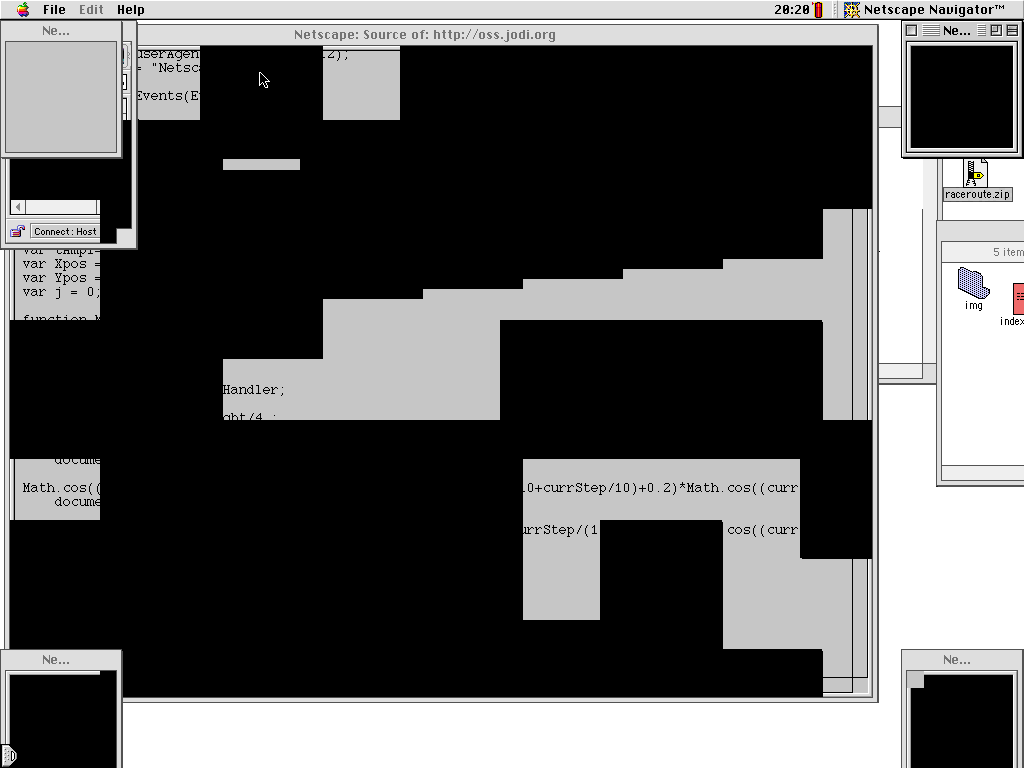 The experience of oss.jodi.org feels as if the artists had played a clever prank on the user. Surely I cannot be the only person who, many years ago when the work was still new, emailed its URL to numerous friends, hoping to give them a little startle during their workday, or, on a few occasions, left it running on public email kiosks like temporary graffiti. As a proto-meme, oss.jodi.org functioned something like the contemporaneous goatse.cx site—a legendary set of three pages containing a scanned photo of an anonymous man stretching the walls of his anus open for the camera, granting the receiver a brutal visual surprise—or the less graphic phenomenon of “rickrolling” that emerged in YouTube’s youth: tricking unsuspecting readers into following a link to an exceptionally annoying music video by ’80s pop star Rick Astley.

Stumbling upon an unexpected item, even today, is a fundamental experience of internet exploration, and JODI’s work seemed to intuit this at an early stage. But unlike these examples, it’s not the content of oss.jodi.org that affects us, for in some sense the work is contentless, the only thing visible inside its frames being the color black, generated by the void-like hex key #000000. Its significance lies rather in its form and in its actions; into its inky emptiness we once projected fears that the inner workings of the computer, and by extension the internet, had exceeded any individual control. Now, the significance of JODI’s consummate prank has flipped to the opposite valence, reminding us of the artisanal nature of the old internet, when behind every page was a person. Rather than eliciting only nostalgia for another technological era, revisiting JODI should make us ask something more urgent: By what methods, in 2020, might we toss a brick into today’s internet?