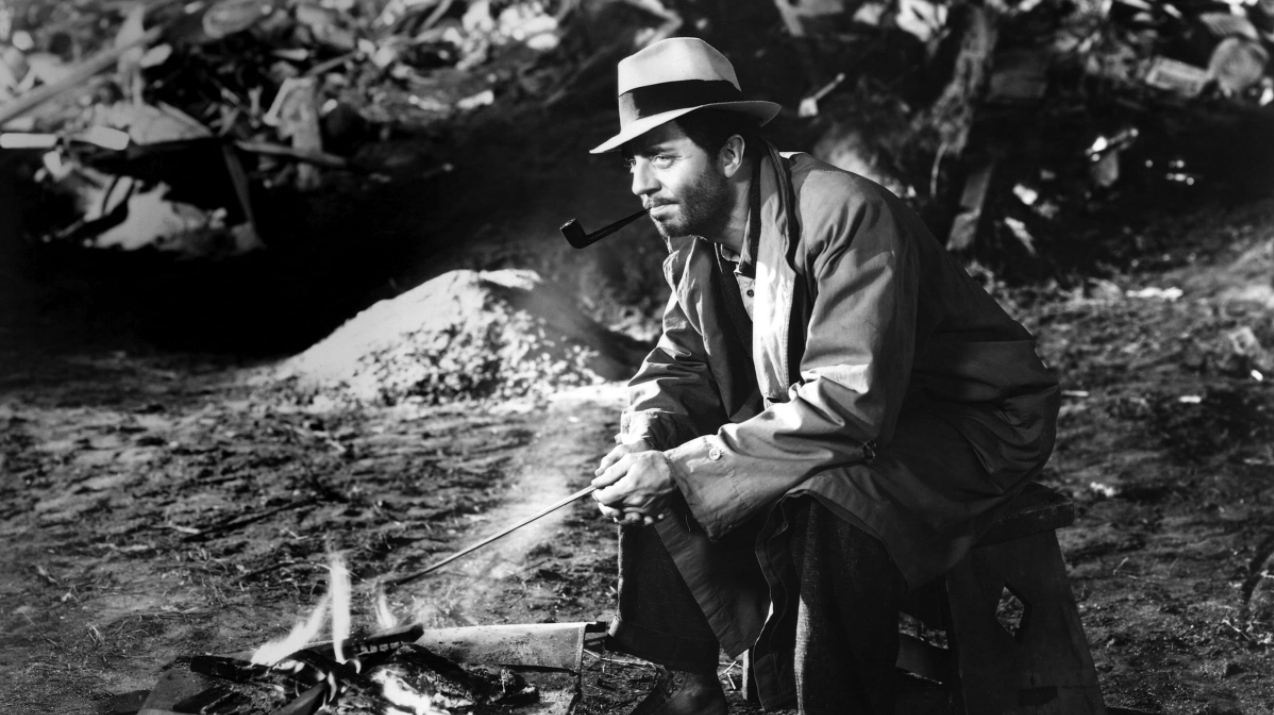 When in mid-March the pandemic darkened most US movie theaters indefinitely, it also interrupted what starting in the previous year had been a procession of successful theatrical releases, in multiple genres, about class rage. There’s Jordan Peele’s inventive horror Us, Lorene Scafaria’s heist movie Hustlers, and Todd Phillips’s superhero-adjacent Joker. Or take Parasite, the tragicomic thriller by Bong Joon-ho, or Knives Out, the Agatha Christie–style whodunnit by Rian Johnson. Ken Loach’s realist drama Sorry We Missed You had been in US theaters for a little over a week when the nationwide shutdown was announced. Each is about the gap between the rich and the poor, the security felt by those who have and the despair of those who do not.

Call it zeitgeist or coincidence or foresight—the films had, of course, all been long in the works—their timing seemed uncanny. In 2019 income inequality reached its greatest recorded level, the stock market soared to new all-time highs (income inequality tends to increase as stock prices do), and Operation Varsity Blues reminded us that the road to the top is paved with legal tender. All while the Democratic primaries made economic stratification a fixture of the news cycle. Then the pandemic arrived, laying bare, if not exacerbating, what was already bad enough.

This synchronicity between the news headlines and the movies called up another era: the Great Depression. The documentary impulse reigned over the 1930s, and even Hollywood’s most escapist fare was liable to contain some element of social criticism—including what was perhaps the decade’s most distinctive creation, the screwball comedy. Arguably the best of these reliably eat-the-rich films—and the one I opted to rewatch during the stay-at-home order—is Gregory La Cava’s riotous My Man Godfrey, from 1936.

The film opens on a Manhattan Hooverville erected in a garbage dump at the foot of the Queensboro Bridge. It’s the equivalent of a wink, since by then the Sutton Place address was well established as a society locale (Anne Vanderbilt and Anne Morgan lived there)—a fitting start, insofar as everything that follows is equally preposterous. Enter giddy, high-spirited Irene (Carole Lombard) and uppity Cornelia (Gail Patrick), in floor-length formal wear. They are sisters—and also rivals, the first of their on-screen battles already underway, as they jostle to tick off the last item on a charity scavenger hunt: a “forgotten man.” They find Godfrey (William Powell), sporting a ragged trench coat, fedora, and scruffy beard. He rebuffs Cornelia (she offers him five dollars to go with her to the swank fundraising event; in reply, he backs her into an ash pile) but finds himself charmed by the daffy Irene, and returns with her to the “Waldorf Ritz Hotel” so that she might prevail over her sibling. Overjoyed at having won, Irene makes a proposal. Her words are innocent—we’re into the Hays Code era, after all—though her intonation is not. She’s smitten: “Can you buttle?” 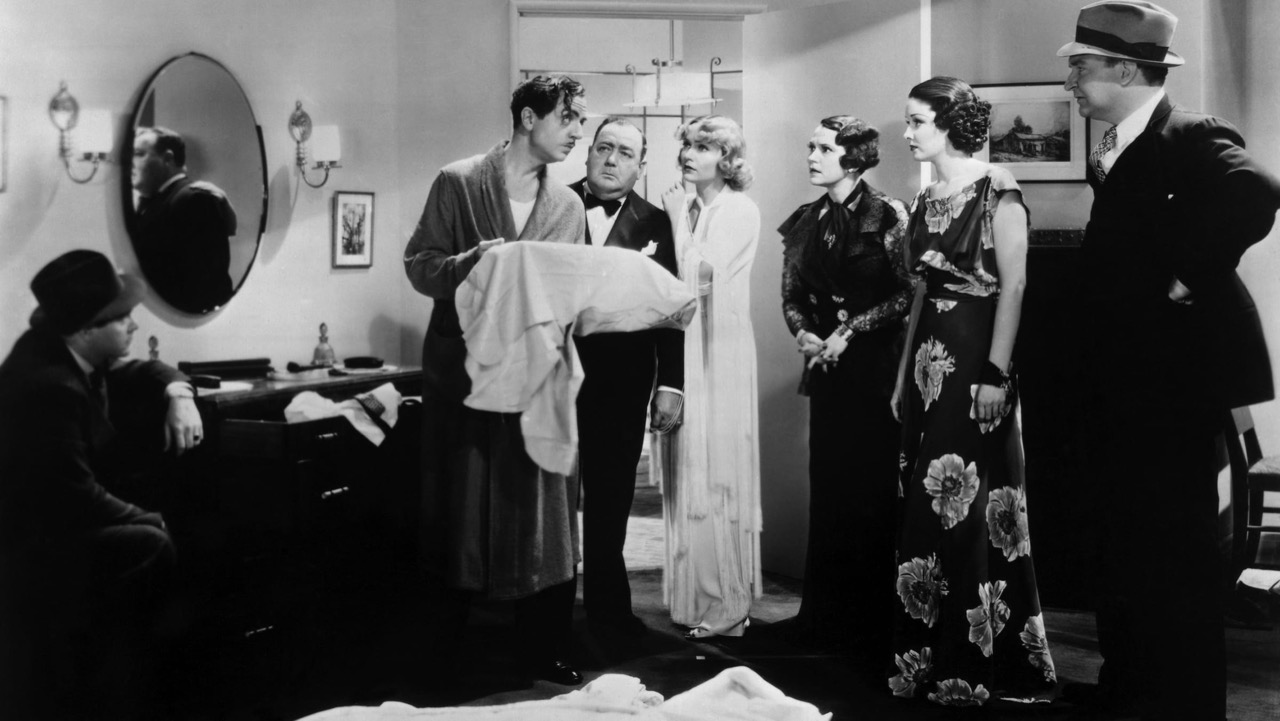 And so begins Godfrey’s tenure as butler at 1011 Fifth Avenue, where he serves as ballast to the Bullock family and their roiling antics. There’s the featherbrained Mrs. Bullock (Alice Brady), who “rambles on quite a bit, but . . . never says anything” (in Irene’s words) and sees pixies as a vestige of last night’s bender. There’s her freeloading “protégé,” Carlo (Mischa Auer), given to reciting poetry, crooning Russian folksongs, and eating all the food. (In her essay for the Criterion Collection, Farran Smith Nehme observes that the censors at the Breen Office were concerned the term protégé might be understood as a euphemism for gigolo.) There’s Mr. Bullock (Eugene Pallette), a beleaguered businessman exasperated by his family’s reckless spending. And then there are the two sisters: wily Cornelia, eager to return Godfrey to his rightful ash pile, and Irene, who, now head over heels for the forgotten man, feigns fainting spells and fakes a betrothal as she tries to win his affections.

Lombard and Powell, who were briefly married in the early 1930s, make an intoxicating twosome. (The couple continued to be great friends after their divorce, and it was Powell who insisted that she be cast in the role.) Lombard, bold, zany, is that rare combination of unstuffy and glamorous. Powell, meanwhile, is the era’s ideal of refinement; for all of Irene’s impassioned effusions, Godfrey remains poised, willful, steadily resistant to her advances. It’d be easy to complain that Irene is nothing but a ditzy blonde, non sequiturs tumbling from her mouth. “It’s funny how some things make you think of other things,” she says, as if discovering the act of association for the first time. Or, when Godfrey asks her whether she’s been taught “certain proprieties,” she replies, “You use such lovely big words,” and claims not to know what he means. But it’s a testament to Lombard’s skill as a comic performer, and to her off-screen intelligence and grace, that Irene emerges as brighter, more artful than the script would have her. 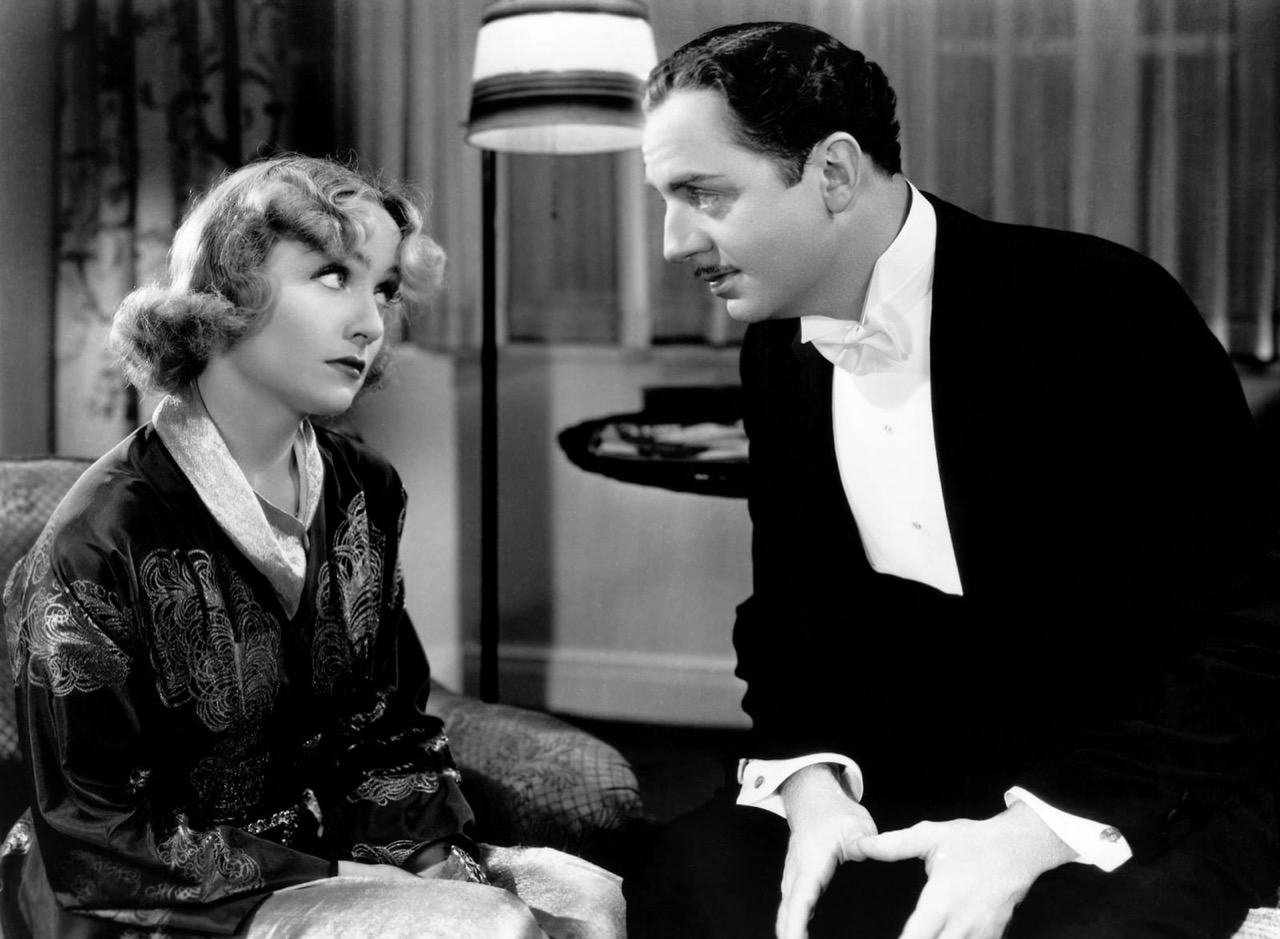 If the “will they or won’t they” proposition motors the narrative—the pair’s verbal dexterity standing in for the sex they can never have—the film’s satirical edge emerges from its pillorying of the propertied classes and the empty promise of economic recovery. The early scene at the Waldorf Ritz, as the dipsomaniac rich flail and shriek and amass things that, in Irene’s words, “nobody wants”—a baby goat, a bowl of Japanese goldfish, a forgotten man—depicts the wealthy as self-indulgent, frivolous, and insensitive to the plights of those less fortunate. On more than one occasion, Godfrey’s neighbors at the dump sarcastically toss off the adage “Prosperity is just around the corner,” echoing the much-lampooned assurances made by President Hoover and others following the 1929 market crash. “I wish I knew which corner,” one replies. And the “forgotten man” motif is borrowed from a campaign radio address by President Roosevelt in which he spoke of the struggling farmers and workers “at the bottom of the economic pyramid.” (He lifted the phrase from William Graham Sumner, a social Darwinist who coined the term, though Sumner used it to refer to those forced by the government to support the so-called undeserving poor. President Trump redeployed it in his 2016 victory speech when he invoked the “forgotten men and women of our country.”) 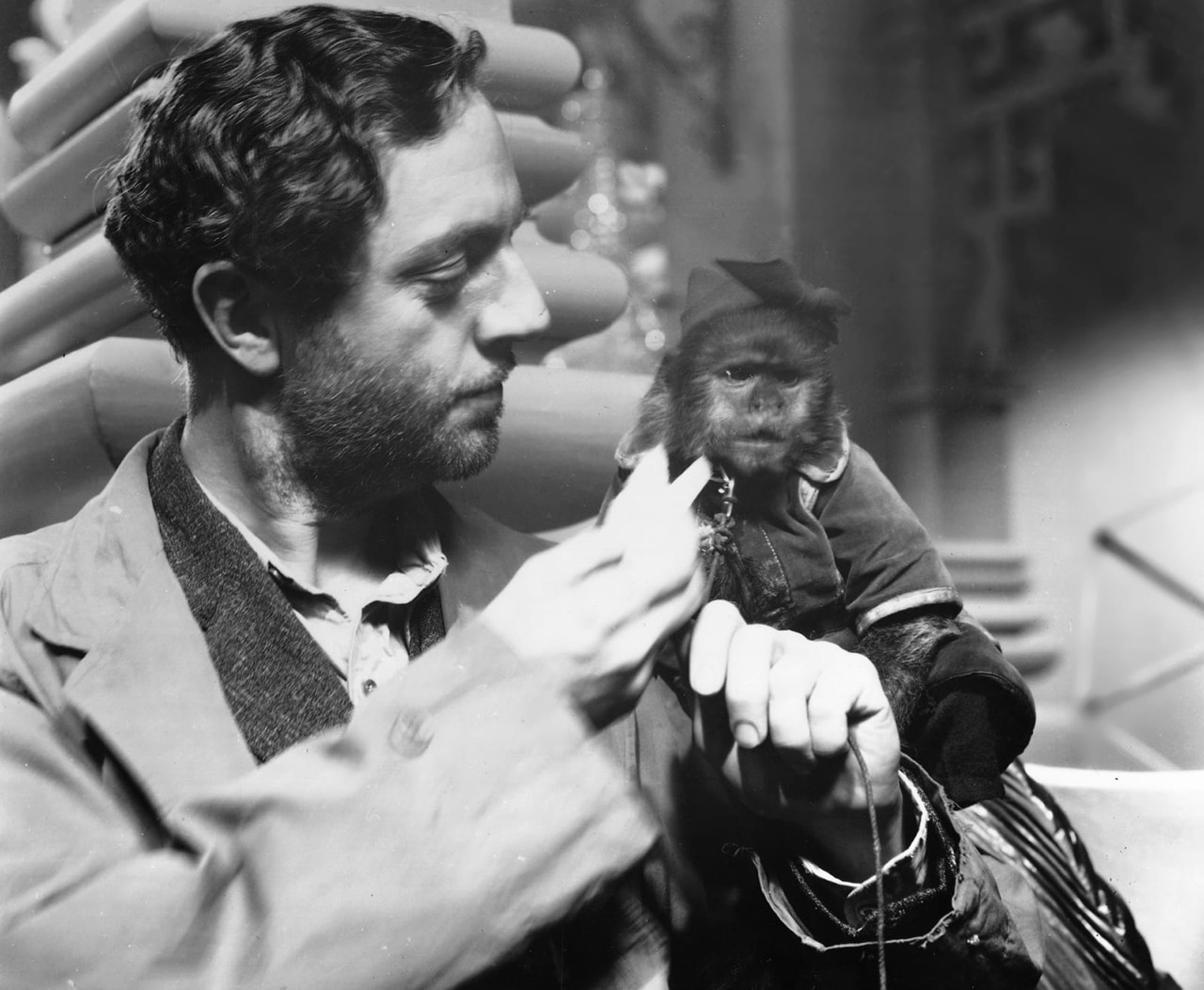 William Powell as Godfrey and a monkey in My Man Godfrey. Image courtesy Criterion Collection.

Yet we learn that Godfrey isn’t so much forgotten; he’s merely opted out. Critics over the years have expressed disappointment with the movie’s end and the scheme Godfrey invents to help his friends at the dump. In his 1936 review for the Spectator, Graham Greene called the film’s “social conscience” a “little confused.” More recent commentators have condemned the picture’s seeming celebration of entrepreneurial capitalism or gentrification. Fair enough—read literally, the film’s politics are indeed capricious. But My Man Godfrey’s truer lesson may lie elsewhere. Listen to Mr. Bullock as he admonishes the family for their extravagance: “I find that you people have confused me with the Treasury Department,” he despairs. “I don’t mind giving the government 60 percent of what I make, but I can’t do it when my family spend 50 percent.” A wealthy businessman who doesn’t “mind” paying taxes? Heard in our Panama Papers era, when corporate tax avoidance is practically global sport, it’s a shocking line. But it’s in this same spirit that Godfrey uses his wealth not to cordon himself off from the less fortunate but to take responsibility for them. As one in four American workers are now under- or unemployed, with no recovery in sight, will we do the same?

Sarah Resnick was born in Canada and lives in New York. Her short stories, essays, and reviews have appeared in the New Yorker, n+1, and Bookforum, as well as in the Pushcart Prize and Best American Essay anthologies. She is currently acting deputy editor of n+1.