Theater
Evening at the Talk House

Wallace Shawn takes a knife to the theater world. 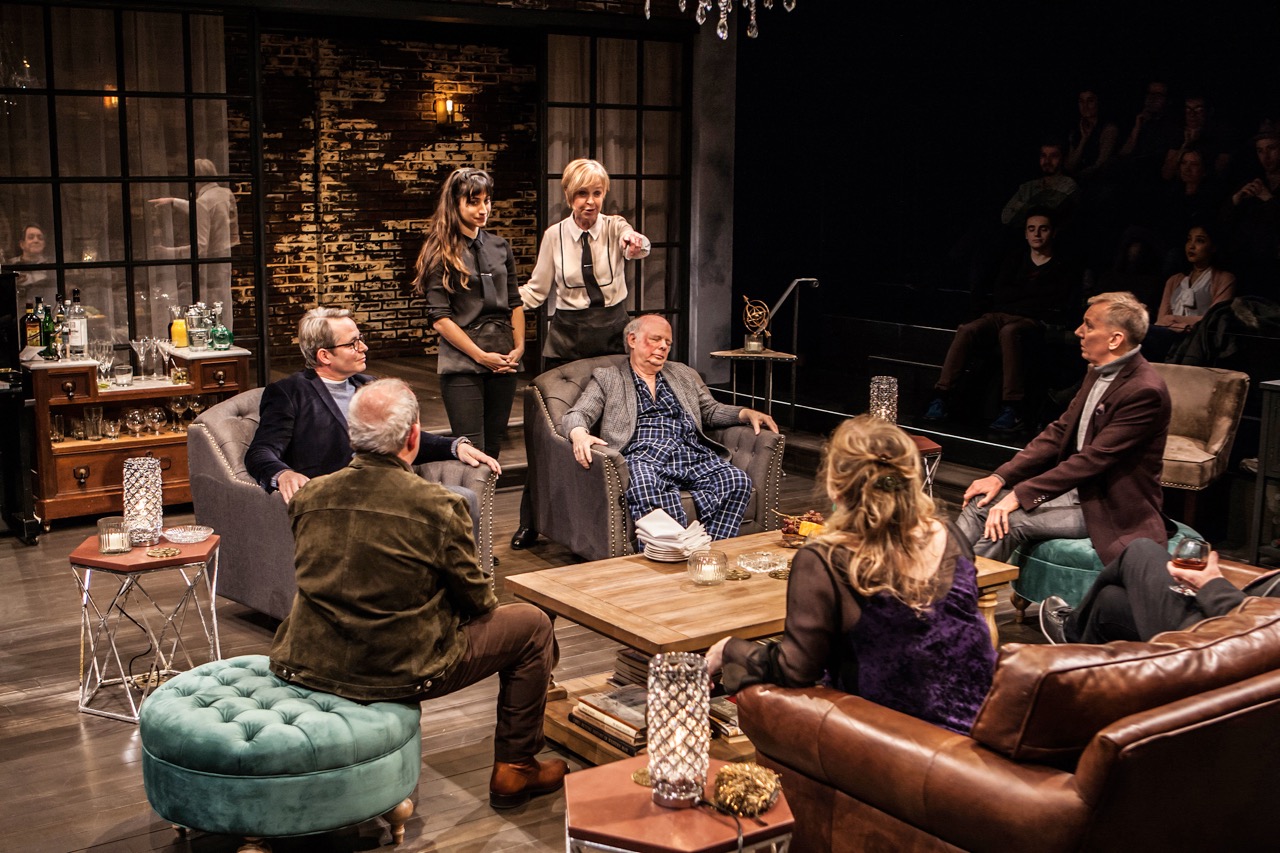 Cast of Evening at the Talk House. Photo: Monique Carboni.

Evening at the Talk House, by Wallace Shawn, the New Group at the Signature Theatre, 480 West Forty-Second Street, New York City, through March 12, 2017

The more authoritarian the United States government gets, the more we revere writers, artists, and thinkers whose work exposes “the banality of evil.” Margaret Atwood. George Orwell. Hannah Arendt. Aldous Huxley. Stanley Milgram. At such moments, these writers seem prophetic, when in fact they’ve chosen only to highlight a timeless truth—people suck, and groups of people really suck.

Wallace Shawn deserves a high place on that list, for his many decades of high-spirited theatrical takedowns of humanity’s hideous values and oblivious cruelty. His controversial, incisive plays like Aunt Dan and Lemon, The Fever, and The Designated Mourner have brought barbarism into the drawing room, anomie to the bedroom. Shawn’s princely status among New York cognoscenti came at birth, by virtue of being the son of venerated New Yorker editor William Shawn, yet his project as an artist constitutes perhaps the most vicious, unsparing, and profane critique of high society and capitalism in American theater today. He doesn’t merely bite the hand that fed him—he usually bites it off, eats it, and shits it out on the faces of his dinner guests. He’s like Woody Allen—if Woody Allen were a suicide bomber. Meanwhile, the general public knows him from his acting roles as adorable schlubs in The Princess Bride, Clueless, and Gossip Girl; he once had a recurring role on The Cosby Show. Shawn has always had the best of many worlds, he knows it, and he’s outraged. 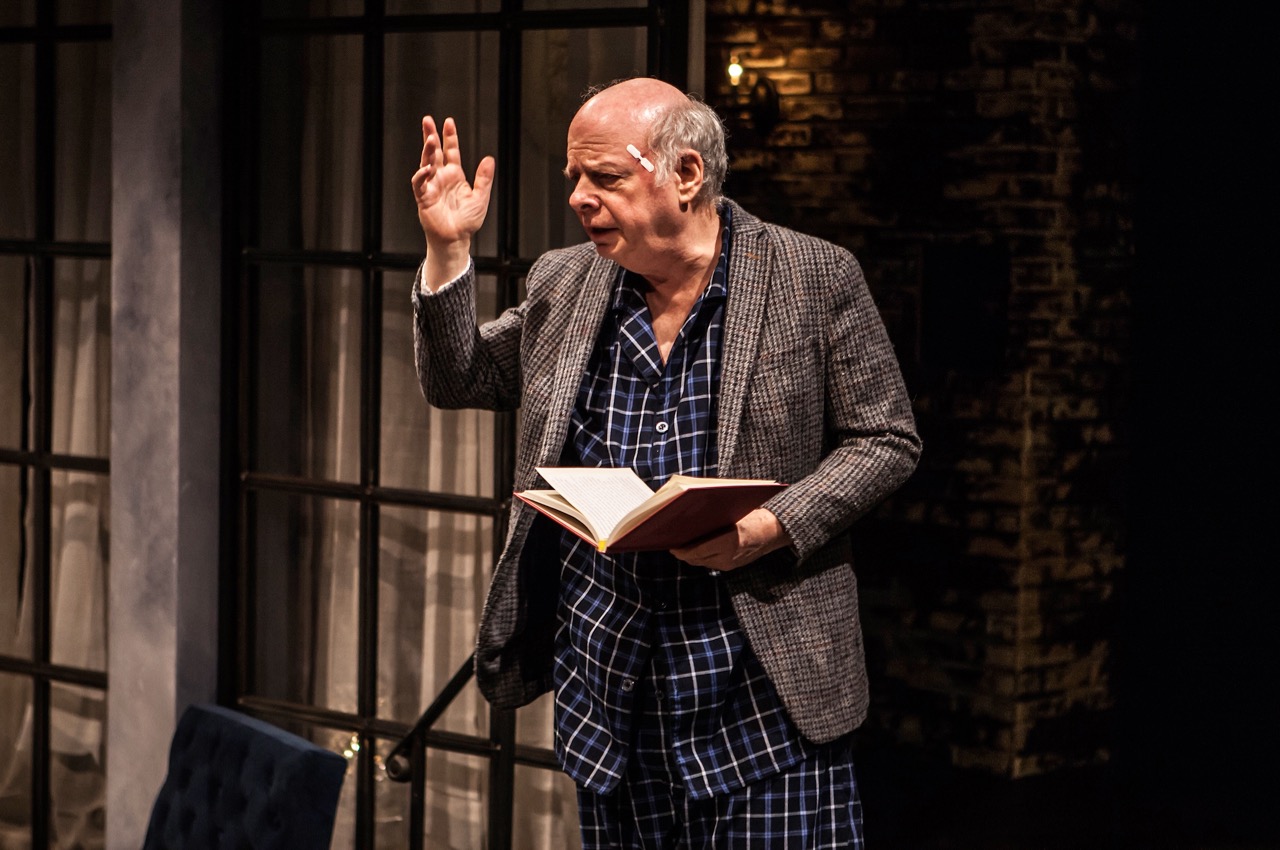 His newest play, Evening at the Talk House, presented by the New Group at the Signature Theatre, plants more land mines on his own turf—it’s a deeply uncomfortable and painfully accurate dismemberment of New York theater people. Matthew Broderick plays stiff, middle-aged television executive Robert, whose erstwhile friend Ted (John Epperson) has gathered a few deteriorating associates to celebrate the tenth anniversary of their production of Robert’s laughably mediocre play, Midnight in a Clearing with Moon and Stars. Of course, they reunite at their old post-show haunt, a loungey pub called the Talk House. A few of the friends have gone on to make money in television or as agents, and a couple work at the bar, same as they did a decade ago. Shawn himself plays Dick, who, after great success starring as Chico on a TV show called Carlos and Jenny, may have become an alcoholic, a madman, or both. At any rate, to Robert—who never liked him in the first place—Dick has become a bitter, difficult person. “He looked as if he’d been drunk for days,” Robert observes, in the rather expository monologue that opens the play, or was “neurologically impaired.”

Gradually it comes to light that this group lives under a dystopian political system, possibly a dictatorship, in which all of the artists who can’t make a living on TV are secretly working for the government, “targeting”—that is to say, killing via drone strike—people in other countries suspected of “wanting to harm us.” Not terrorists, it seems, but foreign nationals who have perhaps only thought about harming anyone. Presumably “anyone” means Americans, but the script never gives away its geography. America as we know it may not exist anymore.

Someone also seems to be assassinating washed-up TV actors. The group’s incessant gossip occasionally turns to a series of unexplained deaths of actors just outside their social group, and concerns that Dick, who has suffered a beating from people he calls “friends,” might soon end up murdered by mysterious forces. Against this unsettling backdrop, the usual actorly struggles march on: Dick feels he should have played a part in Midnight; costume designer Annette (Claudia Shear) laments her lonely existence doing tailoring work; Robert tries to rekindle a sexual relationship with Jane (Annapurna Sriram), a fallen TV star who longs to die; Nellie (Jill Eikenberry), the proprietor of the Talk House, frets about the bar’s financial woes. Like some grim variation on a Chekhov play, the minutiae of their professional lives take precedence over everything else, even these characters’ complicity with a clearly reprehensible political system. They lie to themselves and each other in an effort to normalize their behavior as well as the government’s program of murder. Their banality is almost worse than their evil. 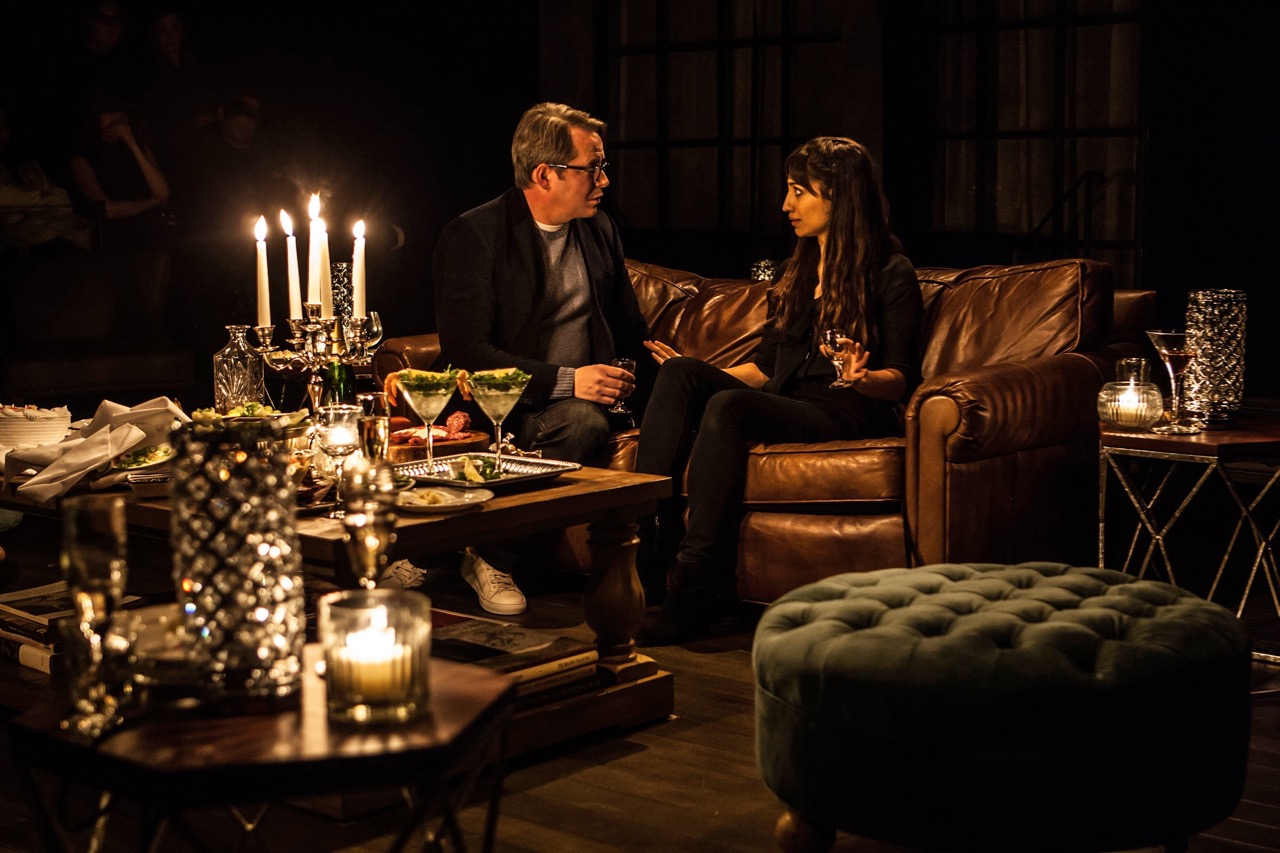 There’s something deliciously nasty about Shawn’s own choice of a target here—that bland, white subculture of aspirational and dubiously talented theater-makers scurrying everywhere around Broadway. It could feel mean and wrong to mock this hapless world, especially for its moribundity and maudlin tendencies. Yet Shawn, director Scott Elliott, and the cast know this group so well and replicate their foibles so precisely that the brutal beating the play delivers frequently masquerades as theater world self-reference, or even love for the characters and the viewers. On balance, though, it’s a giant fuck you.

Shawn concocts a mountain of fake shoptalk for the group: the cast references the invented TV shows Tony and Company, Mouse Chatter, Ocean of Blood; nonexistent actresses Daphne Albright, Heidi Jones, Elaine Mordden, Ethel Hardwick; and politicians known only as Ackerley and Rodman. The group plaintively joins in the chorus of a dreadful song they all remember from a musical. The impenetrable argot is absolutely delightful and hilarious for anyone who has spent time among theater types, but its irony is so delicate that it runs the risk of invisibility, like one of those deadpan sarcastic articles in The Onion that people mistake for the truth. What’s disturbing about the play is how chillingly it depicts this theater community’s complicity in and justification for their involvement in “targeting,” and how neatly they slide brutality into their vanity and devotion to the television industry, its products, and the mafia surrounding it.

When Talk House ran at the National Theatre in London last year, many critics there disliked it. One called it “self-indulgent” and “baffling.” Another called it a “harmless . . . amuse-bouche.” After the 2016 presidential election, the play seems sadly prophetic. Now that Talk House has landed on West Forty-Second Street, the heart of the community Shawn sends up, in a country where a reality television star is now the goddamn president, perhaps everyone will feel implicated by this macabre farce, even if they don’t like looking at themselves in the shattered mirror it shoves in their faces. Especially if they don’t like it.