Midwestern chat, hackneyed axioms, no exit: the Mad Ones present a small-town faculty meeting from hell. 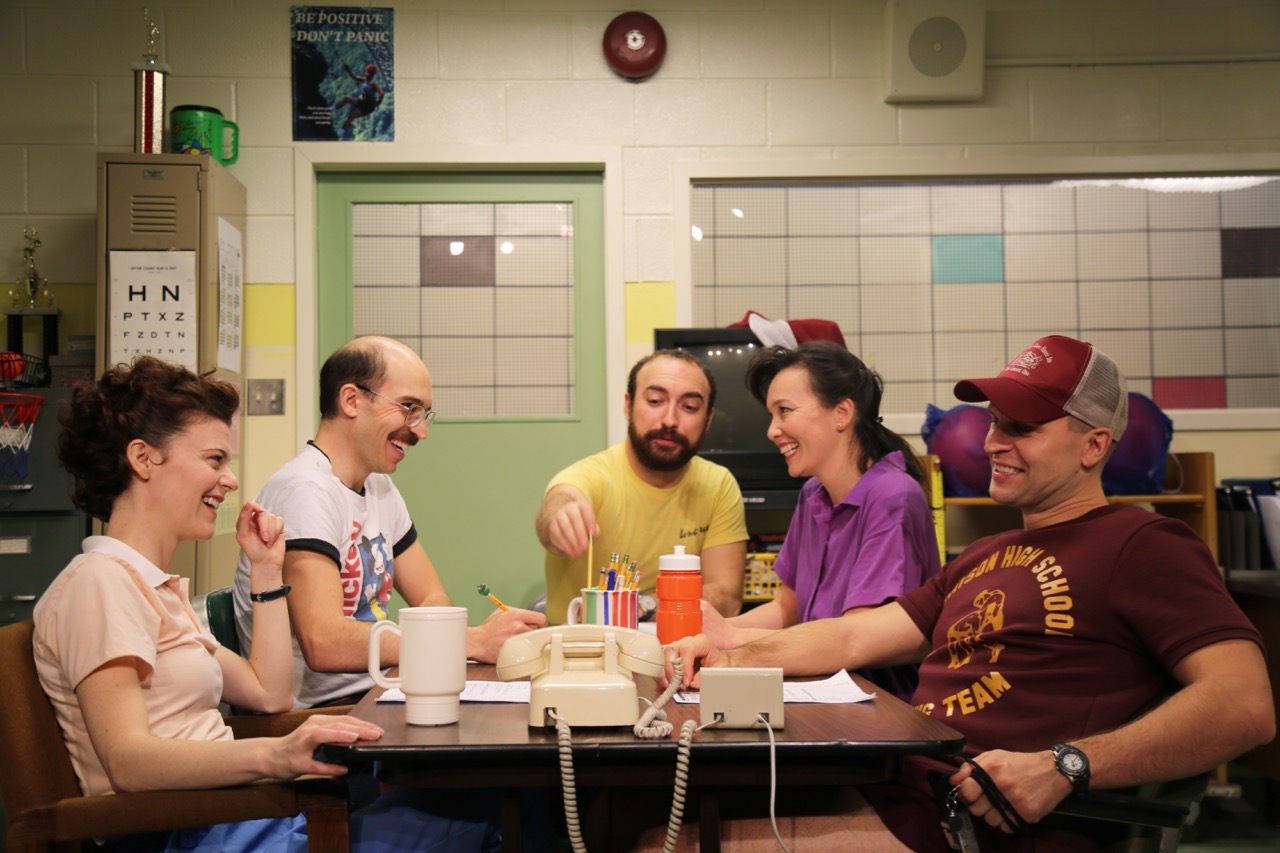 In their program notes for Miles for Mary, the Mad Ones—an avant-garde troupe from Brooklyn making a big-time career move to Playwrights Horizons—assert their dedication to “highly detailed theatrical experiences that examine and illuminate American nostalgia.” It’s doubtful that anyone ever waxes nostalgic for the icky Midwestern chat and platitudes that compose their latest script. But the group’s wholehearted commitment to creating a letter-perfect facsimile of the kinds of things that happen during work meetings in America somehow proves highly entertaining and incisive despite its thoroughly dull subject matter and language, like a film by the Japanese master of the banal, Yasujiro Ozu, translated into stateside mediocrity—Ohio gozaimasu!

Ohio, not surprisingly, is where the play takes place. This production forces you to bear witness to a series of faculty meetings at Garrison High School, in the fictional town of Garrison, during the 1988–89 school year. Six teachers—Sandra, David, Rod, Ken, Julie, and Brenda (Stephanie Wright Thompson, Michael Dalto, Joe Curnutte, Marc Bovino, and Amy Staats, respectively)—have joined this year’s committee to organize the annual telethon to raise $1,000 for a pair of sports scholarships dedicated to the memory of a track team member who died in a car crash nine years before. This year, the chair of the committee, Brenda, has had an accident that keeps her from attending in person. During the majority of the meetings, her voice buzzes in through a speakerphone.

Not only do the Mad Ones mine microdrama from this numbingly trivial context, they perform their mining with a toothpick, completely avoiding any direct attempts to deepen these characters. The dialogue captures flawlessly what happens to language in a community that fears conflict above all else, where everyone tries to be “nice” by seeming to agree with one another, avoiding the appearance of judgment despite their many subtextual disagreements and silent snark. The main thing that occurs is that many, many stale ideas, banalities, and clichés sail by unchecked. “I wanna be part of a committee that values themselves and their purpose,” says Sandra, track coach and math teacher. “That’s what I’m saying. I’m really, really excited by that. I just wanna vote on MORE.” The committee then votes unanimously to “do more.” 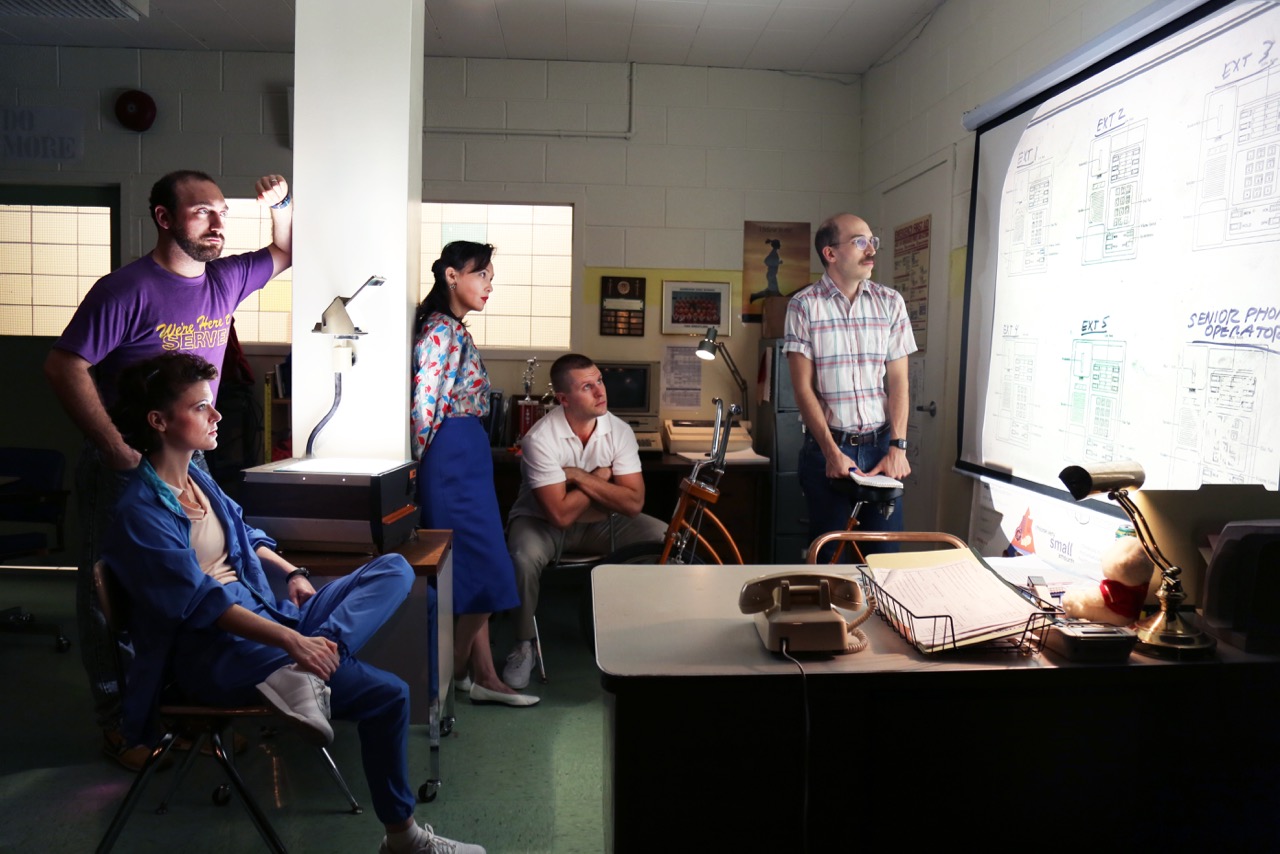 This vague directive, printed on a dot matrix printer, soon joins many other hackneyed maxims on the walls of the set (which Amy Rubin has assembled with painstaking attention to the minutiae of old-time secondary education, down to a functional 1980s model computer). What we learn about these characters beyond their function as committee members comes only by inference—that Julie and Ken are a married couple, that Sandra is single, that Ken is in therapy, that Brenda’s accident may be causing her to abuse painkillers, that Rod thinks Julie and Ken’s marriage is in trouble. We figure these things out while on the surface, the six of them attempt to decide, for example, what the theme of the telethon should be: “Around the World” (a theme they have already used twice), “A Knight to Remember,” “Clear the Hurdles (of Life),” “Hollywood Through the Ages,” or the ultimate winner, “Traveling Through Time.” Have you fallen over from boredom yet? Well, as a committee member might say, hold your horses, there, buddy.

For the theater audience to experience these meetings as if attending them in full (we get to hear everyone’s long list of theme ideas) is excruciatingly relatable—anyone who has sat through an overlong, inefficiently run business conference or counseling session will recognize this particular board room of the Hades Corporation. The veneer of civility and masky smiles, the feints and dodges each character uses to avoid seeming to attack or judge another, the many infuriating axioms related to progress, both personal and professional, that they use to police each other’s behavior all appear in abundance. 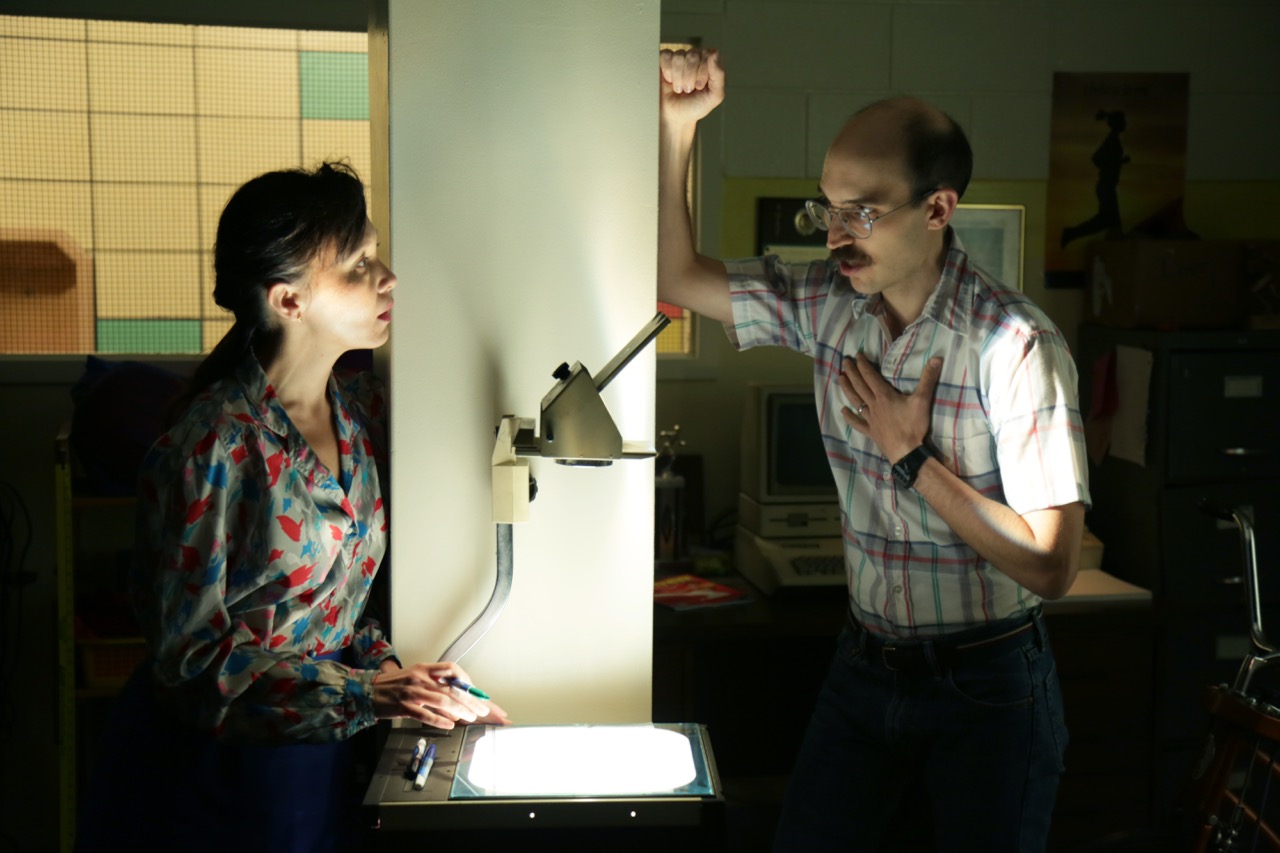 Stacey Yen and Marc Bovino in Miles for Mary. Image courtesy the Mad Ones.

Intriguingly, the play was itself written by a committee, essentially, consisting of the six performers and two other collaborators, director Lila Neugebauer and dramaturg Sarah Lunnie, and this self-reference retrofitted into the proceedings becomes one of the play’s pleasures. An oblique criticism slowly emerges from the proceedings, a sly comment on the way that Americans often speak about their attempts to make art—frequently TV scripts—by committee. How different is the dynamic, you may ask, among the teachers of Garrison High School from the average discussion in a playwriting MFA workshop?

In keeping with its real-life analogues, Miles for Mary would not be complete without a meltdown—optimally, a collapse that exposes the social dynamic among the participants for what it is. Predictable, yes, but incredibly satisfying here given the buildup of tension. The rip in the fabric comes when Ken, the somewhat introverted AV Club director and econ teacher, attempts to explain the new phone system to be used during the telethon. He cannot do so as methodically as he would like; the others keep interrupting him. They don’t understand the difference between putting someone on “regular” hold and “exclusive” hold. David asks Julie, “how is this going for you?” and Ken accuses him of being “patronizing.” There follows a heated argument that consists of defining terms like “patronizing” and discussing whether or not the group needs to “take a two” (by which they mean a two-minute break). At this point, the parallels to Sartre’s No Exit start to become evident. This faculty is going to torture each other eternally. 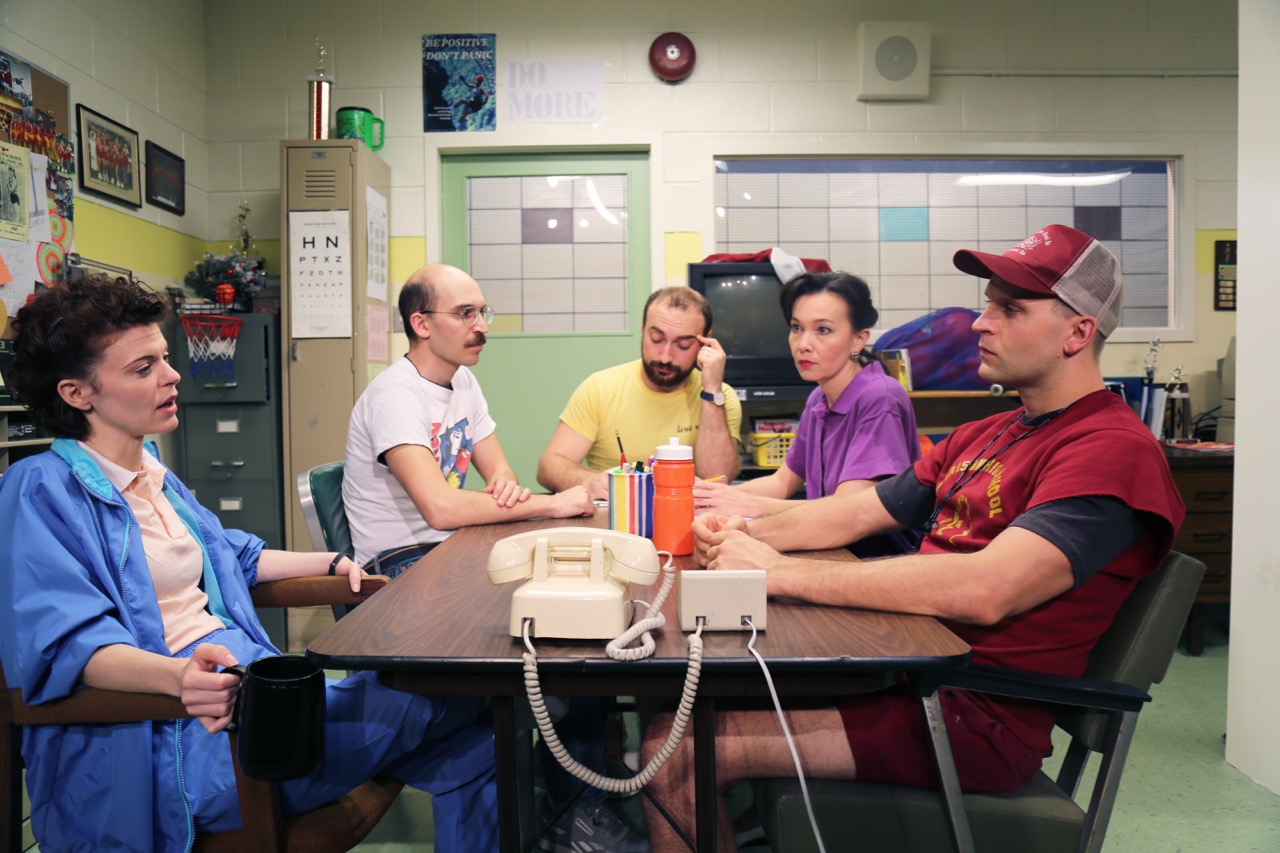 The exactitude and the collaborative development of the project make for a fantastic ensemble piece; Neugebauer elicits these fine performances from the essences of the players until the difference between actor and character all but vanishes. To complain that the main subject matter is inconsequential seems beside the point; it’s hard to believe that this group actually cares about the telethon development methods of middle-aged middle-class white people in 1980s Ohio any more than the audience does, or even that they want us to care about that. The less obvious, micro-Brechtian purpose of the play turns out to be the important one, as it exposes the awful layers of disingenuousness and condescension that pass for discourse in our country, and forces our faces into them. The roots of this anomie lie further back than Garrison, Ohio in the 1980s, certainly, but they’re in constant evidence in the way Americans interact today. Triviality has never seemed so important.