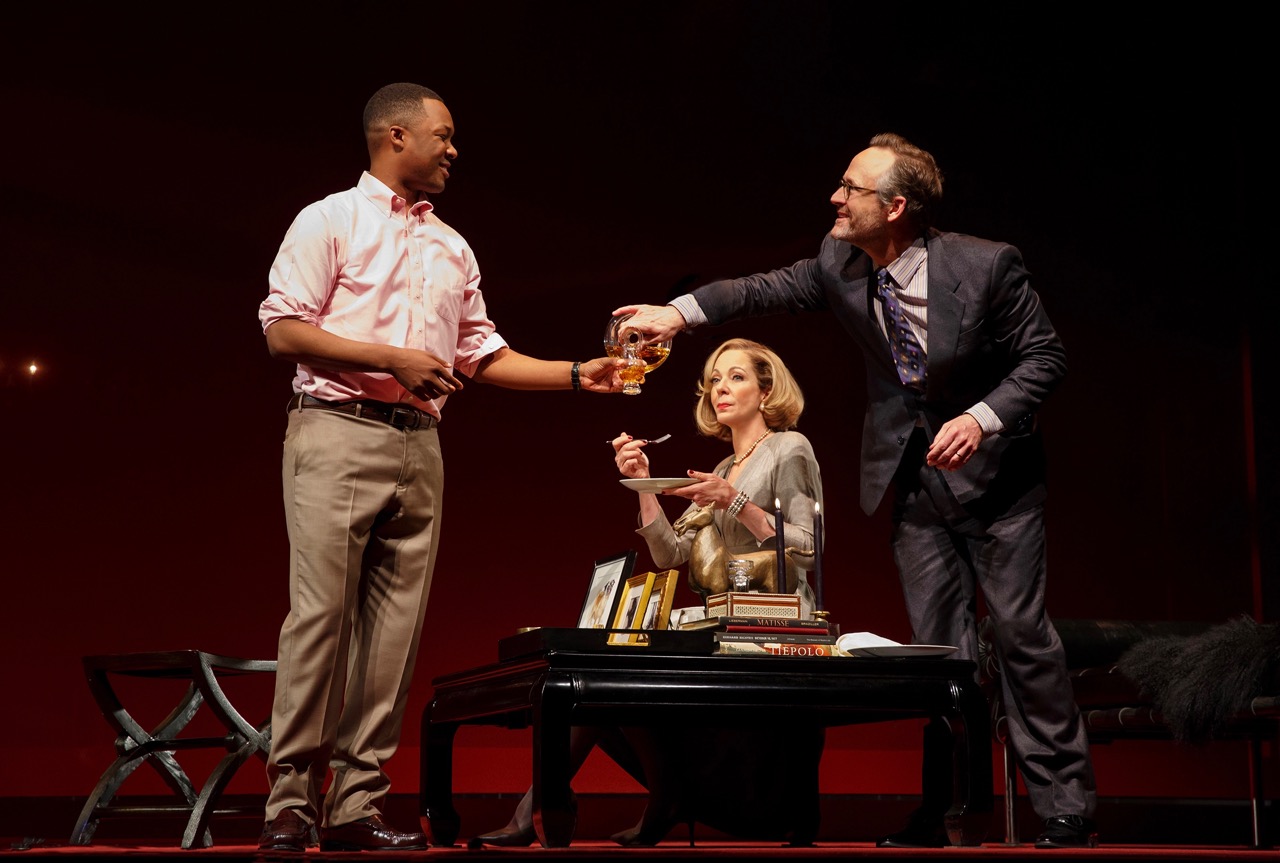 The best evidence for the durability of John Guare’s tragicomic masterpiece Six Degrees of Separation is its title. The 1990 play and its 1993 film version can take a big bite of the credit for spreading awareness of human connectedness in the days before the World Wide Web. The second best evidence for the longevity of the piece can currently be found at the Barrymore Theatre: this near-perfect Broadway revival reveals a play that resonates brilliantly both as a core sample of 1990 and as damning evidence of what hasn’t changed in society since then. Guare’s stunning tale about a black gay con man who claims to be Sidney Poitier’s son so that he can share, briefly, the opulent (and blindingly white) lifestyle of a rich Upper East Side family still explodes with insights on American race relations, on wealth and ambition, and on the nature of truth and artifice.

At the start of the play, art dealer Flanders “Flan” Kittredge (John Benjamin Hickey) and his wife Ouisa (Allison Janney) are about to entertain Geoffrey (Michael Siberry), a South African gold magnate they pray will cough up two million dollars for a painting by Cézanne. Suddenly, a black preppy, Paul (Corey Hawkins), bursts into the apartment. Someone has stabbed him. Paul knows the Kittredges’ children from Harvard, he says—armed with many supporting details—and has come upstairs specifically for their help.

Paul’s wounds prove superficial, yet he charms the Kittredges into letting him stay the night by telling them that he’s Sidney Poitier’s son and promising them roles in his father’s upcoming film of the musical Cats. He makes dinner for everyone, and dazzles the South African, who eventually offers even more money for the Cézanne than Flan had hoped. The next morning, the couple discover Paul having sex with a male hustler and chase both men out. Then they discover that Paul has talked his way into their neighbors’ homes as well. They call the police, but when the officer asks what Paul did, Flan can only say, “He made us dinner.” 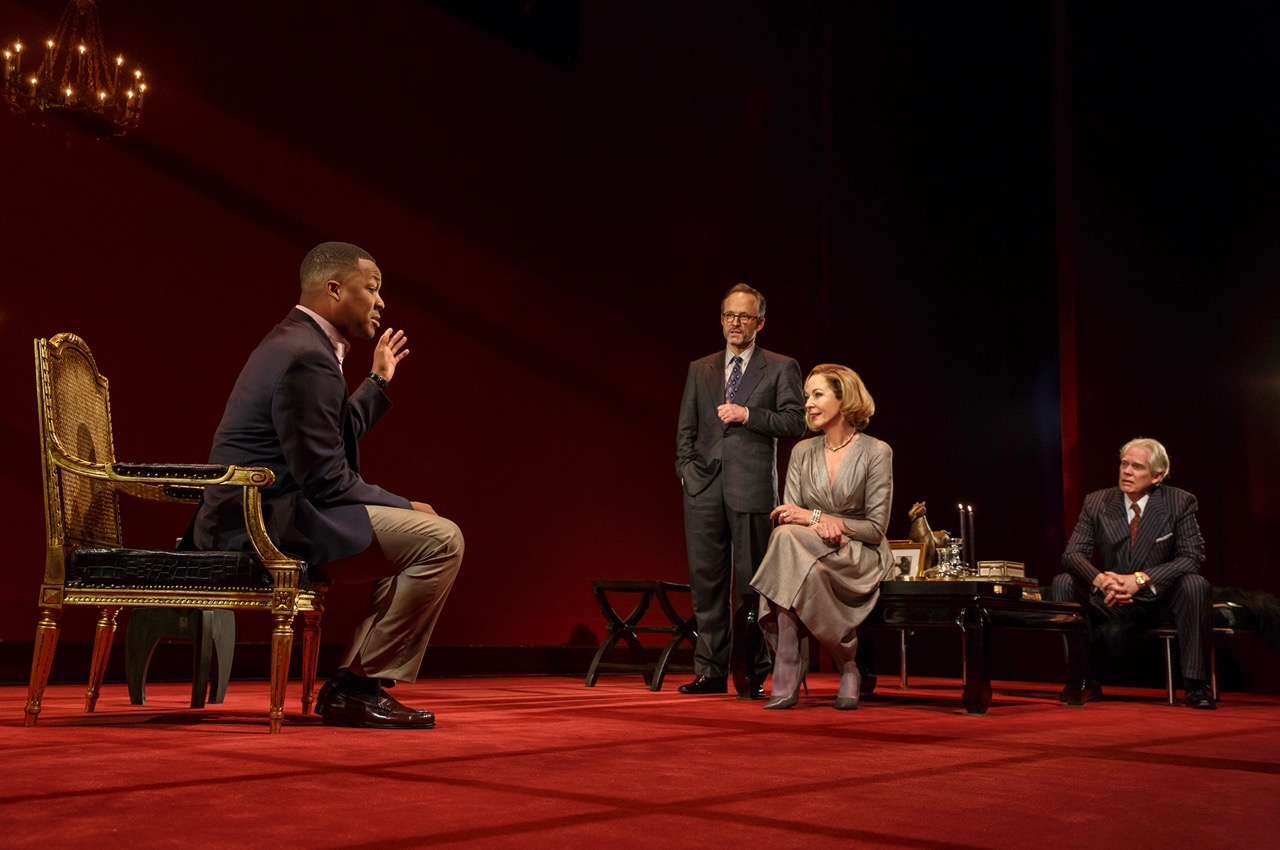 Paul knows that the Kittredges and company will see him as a black dynamo and project positive stereotypes onto him—even the South African, who has seventy thousand workers in one of his mines. Paul masquerades as their Negro ideal—not surprisingly, a replica of a white overachiever—and when the truth comes out, they’re devastated to learn that their self-congratulatory racial tolerance is just as fraudulent as his subterfuge. The Kittredges and their neighbors need Paul to validate them—to prove to themselves how open-minded they are—but after he’s exposed, some switch flips and the negative stereotypes kick in. One neighbor calls him, baselessly, a “fucking black crack addict.” Ouisa, still hypnotized by Paul’s charisma, struggles to force truth into his lies and make him the black messiah of her fantasies. Given the Kittredges’ shady art deals and sucking up to apartheid-era South Africans, though, one might have a difficult time figuring out whether the Kittredges are bigger scam artists than the guy they feel so betrayed by.

A real person inspired the play. David Hampton, a black gay con man with aspirational fantasies, pretended to be Poitier’s son to get into Studio 54, as well as to get Gary Sinise to let him sleep in Melanie Griffith’s apartment, among many scams. Hampton’s charisma was legendary. In Hampton’s New York Times obituary (he died of AIDS-related causes in 2003), one of his later victims, ditched with a $423 dinner tab and having paid $1,000 for a ticket to a nonexistent 9/11 benefit, said of the encounter, “Honestly? It was one of the best dates that I ever went on.”

Guare had known a couple of Hampton’s victims personally, and embellished their story accordingly to create Six Degrees, structuring it like a long anecdote recounted over cocktails, full of direct addresses from the Kittredges, who speak to the audience as if we’re sympathetic friends of theirs and Geoffrey’s. Twenty-seven years after the premiere of Six Degrees, deep in our age of the Internet, the play’s sense of hope about making contact with others has acquired a bittersweet Sartrean tinge. Ouisa rhapsodizes optimistically about distant strangers, marveling that one need only “find the right six people to make the connection” between herself and all of humanity. In the social-media era, with its cyberbullying, phishing scams, and other hateration, she seems tragically naïve.

Six Degrees leaps from deeply troubling to uproariously funny, from sarcastic to passionate; to parse all its themes would require a dissertation, not a theater review. The degree of difficulty, to use an ice skating metaphor, is like a quadruple salchow. Fortunately, there isn’t a single slacker anywhere near this production—it practically improves the show next door. (The Little Foxes, which also investigates American greed, set one hundred years earlier.) Every performance and design element feels full of energy and nuance, but Janney and Hawkins are particularly excellent. Their portrayal of their characters’ misguided journey into each other’s lives lends the story heaps of aching pathos; at the same time, Janney’s comic timing is flawless. The play moves at high velocity and zigzags from gags to gut-punches; additionally, it requires the actors playing the Kittredges to break and reconstruct the fourth wall nearly line by juicy, irony-fortified line. At times Janney gambols and leaps around the stage like the expert show horse her seven Emmys have proven her to be; at others she seems quietly and convincingly lost in anguish at the plight of the petty crook she pities so deeply but abandons so carelessly. Hawkins inhabits Paul’s wily charm and self-delusion so well that all the characters’ transgressions really do seem forgivable; even when he ends up triggering a suicide, you want to make excuses for him. After all, it isn’t murder. 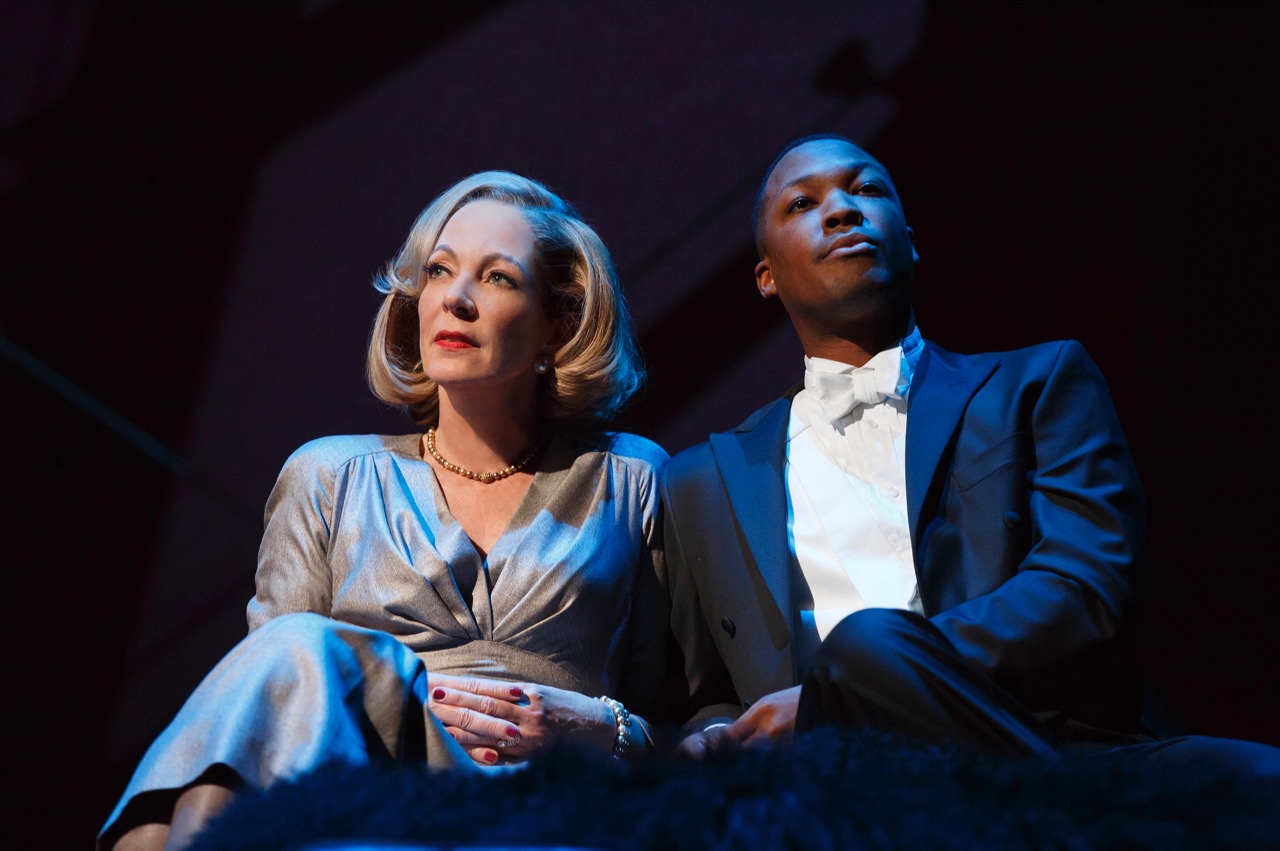 Director Trip Cullman, who selected and wrangled such a superb cast and crew, should share credit with Janney and Hawkins. Perhaps by virtue of being a gay man from a prominent New York family, he comprehends the entire world of the play. The fact that Cullman came of age here during the times Six Degrees describes has likely informed all of his funny, touching, canny choices, including the musical selections; we first hear the dance-doom of New Order’s “Blue Monday” and we exit to the Cure’s wistful “Pictures of You,” in which lead singer Robert Smith wails about confusing art with reality. Whatever needs to come off as broad comedy, such as the Greek chorus of the Kittredges’ spoiled leftist children and their social group, also feels witty and intelligent, and when the play needs to break your heart and stomp on the pieces—like when Paul calls Ouisa from Rikers Island, exposed but still delusional, insisting that his last name is Poitier-Kittredge—the whole experience is absolutely invigorating, a gorgeous confluence of artifice and truth, past and present—in short, one of the best dates you’ll ever go on.