In memoriam: a tribute to Tate’s anti-entitlement, anti-elitist spirit. 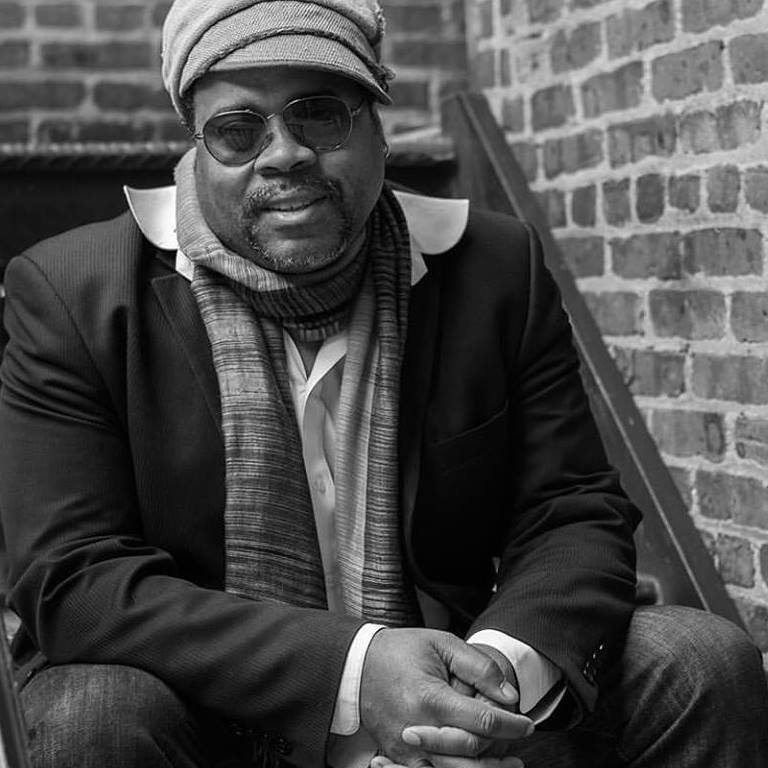 Did it get you in your soul, as Mingus would say? Greg Tate asks the small audience gathered for a panel at Duke University circa 2017. His soft-spoken vibrato lands somewhere between sullen and insistent, the inquiry as personal as it is external. The conversation centers on Arthur Jafa’s film Love Is the Message, the Message Is Death. Tate possessed Mingus’s stature so that the invocation is a reincarnation of Mingus and his regal stalkiness that any hat he wore matched and accentuated. These are two men who were born in hats, modest crowns—the crown’s muses. When Tate poses Mingus’s question, he becomes Mingus, the rhythm and the ribbon in the room managing to string it all together without giving up any sovereignty or reserve.

Such was his ability, to both recede and pounce—on the page and in intellectual conversation. He was a critic who could shape-shift at will into the musicians and bands he was addressing, finding each unique vernacular therein until they were all his own simultaneously. Many with his same obsessions decamped for academia and became once-removed from the context of those artists they felt equipped to judge. Tate had an anti-entitlement, anti-elitist spirit and leaned into the real world instead, attending the clubs and parties where the music was played rather than engaging as a remote voyeur—he used his position as a staff writer at the Village Voice to make his attendance part of his work. Tate was as close as we’ve come since Amiri Baraka to a black music and culture writer who could keep up with the people whose work he was scrutinizing. He achieved this by regarding them as real people and not larger-than-life abstractions to be churned and manipulated or plugged into theories and fixed paradigms. Tate’s style refuses to fetishize or eroticize the human beings doing the labor of music and culture making, and that refusal makes his writing hauntingly human, poignant, and approachable—the critic next door who you didn’t know was seething with some of the deepest feelings about sound and melody because he carried those feelings so politely. He kept them to himself until it was appropriate and inevitable to share them, the way you might hold onto a secret about someone you love until the cosmos needs it from you and then blurt it out as pure as a child shouting at the sky when he thinks he’s alone.

Tate’s role was not just to criticize but also to protect, which meant to be so honest and thorough that no one could call him biased, but to be so pro–black music and culture that his writing about it borders on the autobiographical. He was documenting the culture as he lived it and stalked its habits and circuits and made his own adaptations, including his own band, Burnt Sugar the Arkestra Chamber, which echoed the title of Sun Ra’s band and was just as elusive and raw. In 1985, very early in his career, Tate, alongside guitarist Vernon Reid and several other working musicians, founded the Black Rock Coalition, largely to demand mainstream recognition of the fact that black people invented and continue to reinvent anything we might refer to as rock and roll, which is just the blues repurposed for maximum arousal of adolescent hysteria and therefore maximum access to radio spots. This is the music that established the teenager as a demographic and keeps us in that demographic as long as we will allow it. Rock and roll is black music that happens to seduce white audiences. The euphemism “cover” was used at its inception to describe the practice of re-recording “race records” by black artists as white rock or R & B to sell to white teenagers. Tate refused to watch blackness stunted by collective false perception and appropriation. The Coalition’s aim was to help black musicians survive attempted erasures. This calling permeates his writing as well.

One symptom of those erasures is the masculinist and trivia-ridden aspect of much music journalism, which sometimes turns it into a battle of egos as if the writer were the one discovering all the music and not just a more athletic witness: Tate circumvented that tendency by avoiding the superlative for the most part and staying on topic. The topic was the music itself, and that would inspire the taut and focused atmosphere of his prose. He did not need to overcompensate or prove a point preemptively. He did not write advertisements or incendiaries. He constructed deep, often-reverent observations that did not descend into fawning either. He could, for example, love Herbie Hancock’s music, but admit that he was not the greatest living soloist and thrived with ensembles. He could call out Michael Jackson as if he were his own cousin, and then flip it, remix himself, and name each facet of Jackson’s gift as if he were the arbiter of that gift.

This rare combination of propriety and total bravery and versatility is Greg Tate’s legacy. Maybe some of his signature subtlety and intensity has to do with the path he took from Dayton, Ohio, to Howard University in Washington, DC, to New York City—migrations can inspire clairaudience—but my sense is that most of his uniqueness and humility stemmed from a lifelong commitment to the beginner’s mind, to listening as if for the first time, to not becoming jaded in the face of an abundance of sound and range. He addressed Public Enemy and John Coltrane with the same fervor. And he offered us the detail of blood spewing from ’Trane’s mouth as he played, emphasizing it as carefully as other writers have ignored it. That visceral sensibility can only come from having been there yourself, bleeding either literally or figuratively in front of an audience expecting you to sing.

I’ll admit I expected Tate to keep singing for many years to come. He had a vast life force that did not seem to be waning, and when someone uses his heart that well, you don’t expect it to stop. The same vulnerability he could witness in and convey about the artists he loved, he also possessed. The same toll that life in clubs and on stages takes on those artists, it takes on those courageous enough to show up for them again and again. I don’t think we say thank you enough to people who modestly perform feats of joy and sorrow unmasked on the page, especially when those figures don’t ask to be lionized and don’t really ask for anything at all, but do the work for the pleasure of participation. Thank you, Greg Tate. Few are left who can peer into the abyss of an album and translate its meaning into words like an alternate score without that maneuver seeming contrived or overwrought. It did get in your soul, his tone did, the same way a great musician’s might.

I think the word I’ve been looking for to describe Tate’s presence as I experienced it on and off the page is zen. Maybe that seems regular and unspectacular, except how many times have you met a zen negro at the club? And you may never encounter one again. I cold-emailed Tate when a book of mine was coming out and I needed permission to use a still from the film Ganja & Hess on its cover—don’t know why I was told he was the source. He was, he made it happen, and we discussed the beauty of that film and its soundtrack, composed by Nina Simone’s brother Sam Waymon. I suggested he do it as an album with his Arkestra. We left it there, with him saying he would go back and listen with that in mind. That attentiveness and curiosity and measuredness and freedom-wish—it got in my soul.

Harmony Holiday is the author of several collections of poetry and numerous essays on music and culture. Her collection Maafa will be out next month.