Pop
The Beatles: Get Back 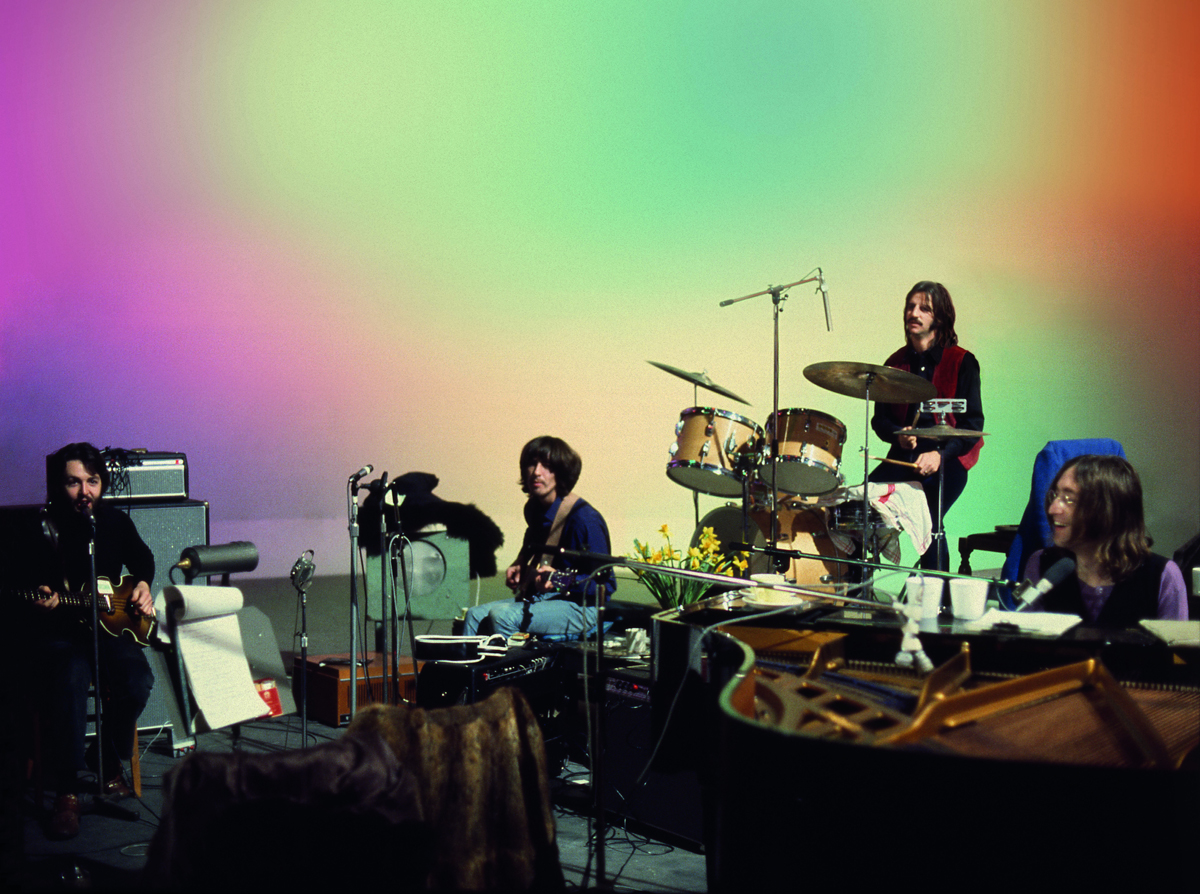 The Beatles: Get Back, directed by Peter Jackson, streaming on Disney+

What can we say about the Beatles that is new? Their every move has been lionized, dramatized, anthologized, monetized; they have long transcended being a band to being a part of the fabric of our lives. They were my first favorite group, at the age of eight, and their music is so embedded in my life that listening to it seems as natural as breathing. John Lennon’s voice is as recognizable a twentieth-century instrument as the electric guitar; his every utterance of the words “oh yeah” feels like part of our sonic vocabulary as a species.

And so it’s surprising that the Beatles film opus Get Back, directed by Peter Jackson, seems so stark, alien, and new. The mammoth docuseries, nearly eight hours long, is based on sixty hours of grainy 16mm footage from 1969 that has never before been in public view. That archival material—outtakes from the 1970 Let It Be film, directed by Michael Lindsay-Hogg—was painstakingly whittled down, subjected to a wide variety of cutting-edge restoration treatments, and mixed with selections from 150 hours of restored archival audio. Jackson has long been known for his flair for buzzy digital technology in his hugely expansive movies. He blew up The Hobbit, a 320-page book, into a trilogy in hyper-immersive 3D, using dozens of ultra-high-end custom cameras to shoot the blockbuster movies at forty-eight frames per second. His movies based on the Lord of the Rings series followed a similarly bombastic style. Jackson’s lesser-known World War I documentary from 2018, They Shall Not Grow Old, for which he took century-old film and meticulously cleaned and colorized it through an extensive rejuvenation process, bears the closest resemblance, methodologically, to Get Back. 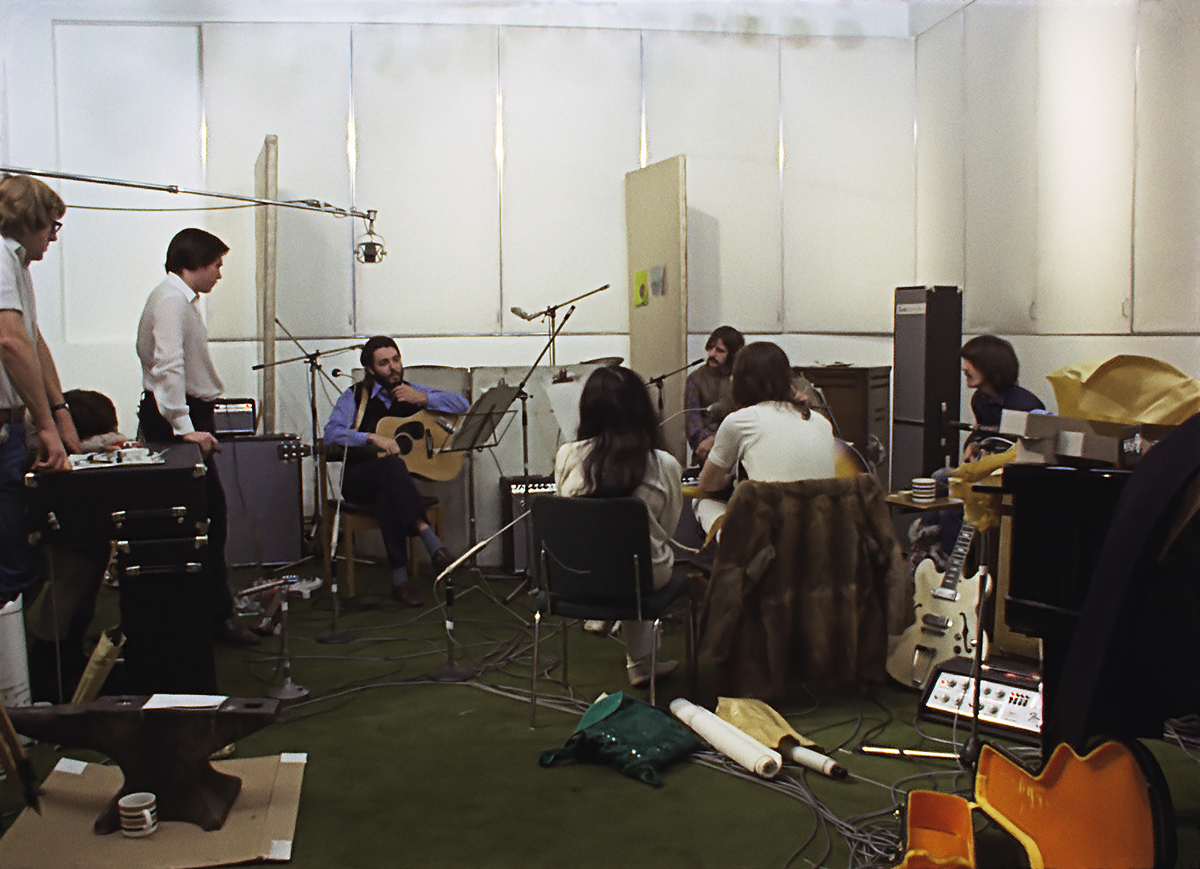 In Get Back, the strenuously restored footage looks so luminous it’s almost shiny. A bright, euphoric, hyper-crisp halo surrounds the Fab Four. Jackson has said in interviews that the original footage was in color, but the faded hues from the 1969 reels have been amped up to a glowing, dazzling intensity. You can see the candy-colored stripes on George Harrison’s pants, the intricate design on Paul McCartney’s brown leather shoes, the lustrous gleam of Ringo Starr’s red raincoat on the rooftop of Apple Records in London. We watch the band doggedly rehearse on a soundstage at Twickenham Studios, workshopping songs that would soon become classics: “Get Back,” “Don’t Let Me Down,” “The Long and Winding Road.” The Beatles are portrayed in their last dying embers—they would soon break up—and their fabled personality clashes are there for all to see. The band’s manager, Brian Epstein, had passed away suddenly in 1967, and with so many other changes taking place, Paul emerged as the band’s de facto leader. He comes across as bossy, governing the Beatles with his songwriting and organizational prowess, while John seems mentally and emotionally detached at times, but still along for the ride with plenty of genius to spare. Ringo is generally cheerful and appears content with his role of playing the drums in the back. George is clearly frustrated; his formidable skills as a guitarist and songwriter are being undervalued, and he is often treated like a session musician. His exit from the band—which is glossily documented here—is predictable. 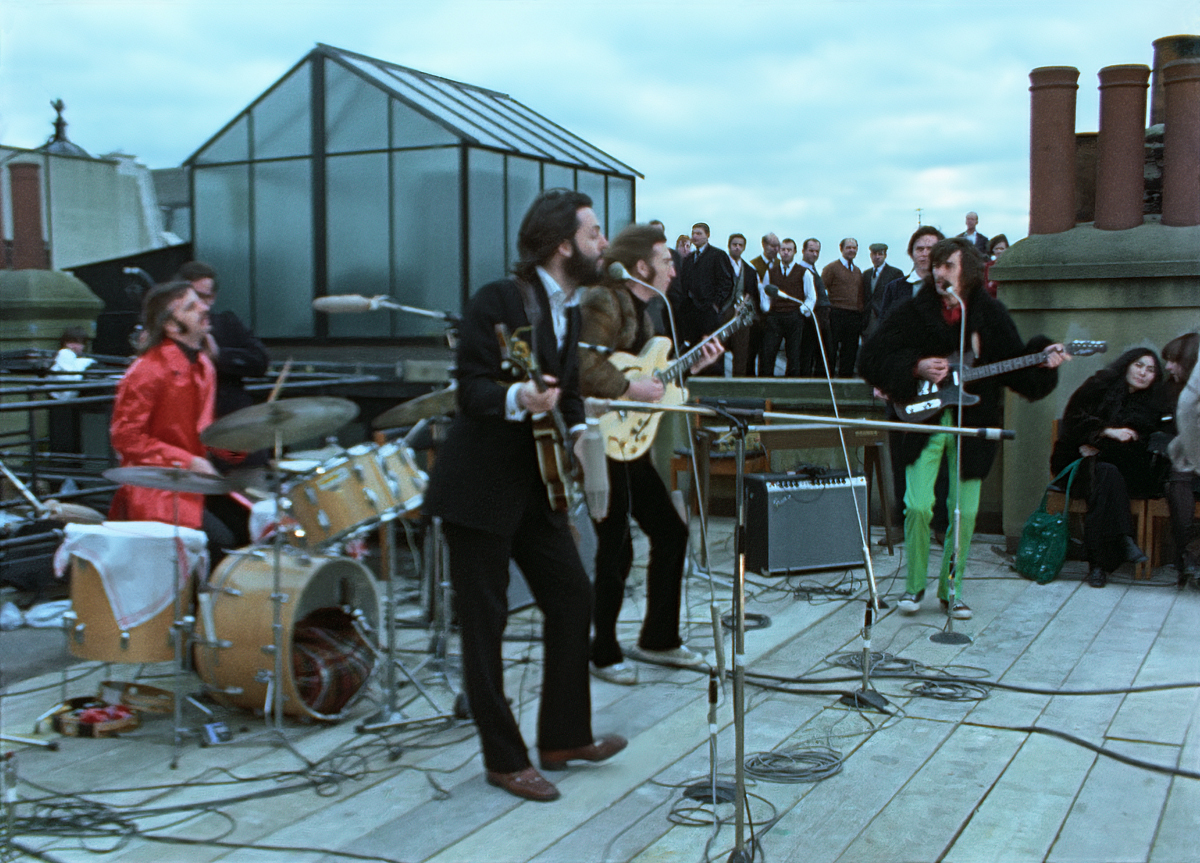 The magical aspect of Get Back is its total refusal to adhere to the standard tropes of music documentaries. There are no talking heads commenting on the Beatles’ greatness, no continual barrage of quick edits and highlights. The movie is based almost fully on footage of the band rehearsing, first at Twickenham and then at Apple Studios in London, culminating in the legendary final performance on the rooftop of Apple on Savile Row. In Get Back, we take notice of the creative process in its full, often mundane reality. We watch songs emerge from hums and the strumming of a few chords—the sequence depicting the making of “Get Back” is incredible—and hear the same tune being played through multiple times. The effect can be almost numbing—I lost track of how many takes of “I’ve Got a Feeling” there were—but I have never seen a film that so accurately portrays the slow, tedious process of music making. Jackson’s affinity for bloated, overlong dramas helps here; in the hands of a different director, this would have been cut into a ninety-minute feature. But observing nearly eight hours of the Beatles’ inner creative lives—the pettiness, the bickering, the occasional breakthroughs, the gradual, iterative musical development—is a thoroughly intense and profound experience, one I have never had with any other music documentary. Jackson has described Get Back as time travel—a way to feel like you’re right there with the band. To me, it’s more than just time travel; Get Back opens a riveting new conversation with a prior moment in time.

Much of Beatles lore is based on received wisdom, but Get Back breaks apart a lot of myths that have long surrounded the group. The hatred piled on Yoko Ono, who has been so often blamed for the Beatles’ breakup, gets defused here—she is depicted as a constant but mostly passive presence in the background. The deepening rift between George and the rest of the band becomes palpable; a segment featuring George shyly and tentatively introducing a new composition he has written—“Something,” which would soon become a classic—demonstrates how much his self-esteem had been worn down by this point. (Then again, another segment picturing Paul performing his new song “Let it Be” while no one seems to pay attention illustrates how his brilliance was often taken for granted.) Billy Preston, an ace musician who had played with Ray Charles and Little Richard, saves the band at several points with his energy, enthusiasm, and effervescent keyboard parts. And, to be fair to Paul, we see for ourselves that several of the songs published with the storied “Lennon-McCartney” credit may have never happened without his indefatigable drive and will to succeed. Get Back is inspiring—a rare look into the creative process with radiant, almost blinding clarity.