Nonfiction
A Line in the World

A collection of meandering essays by the Danish author Dorthe Nors takes the road less traveled. 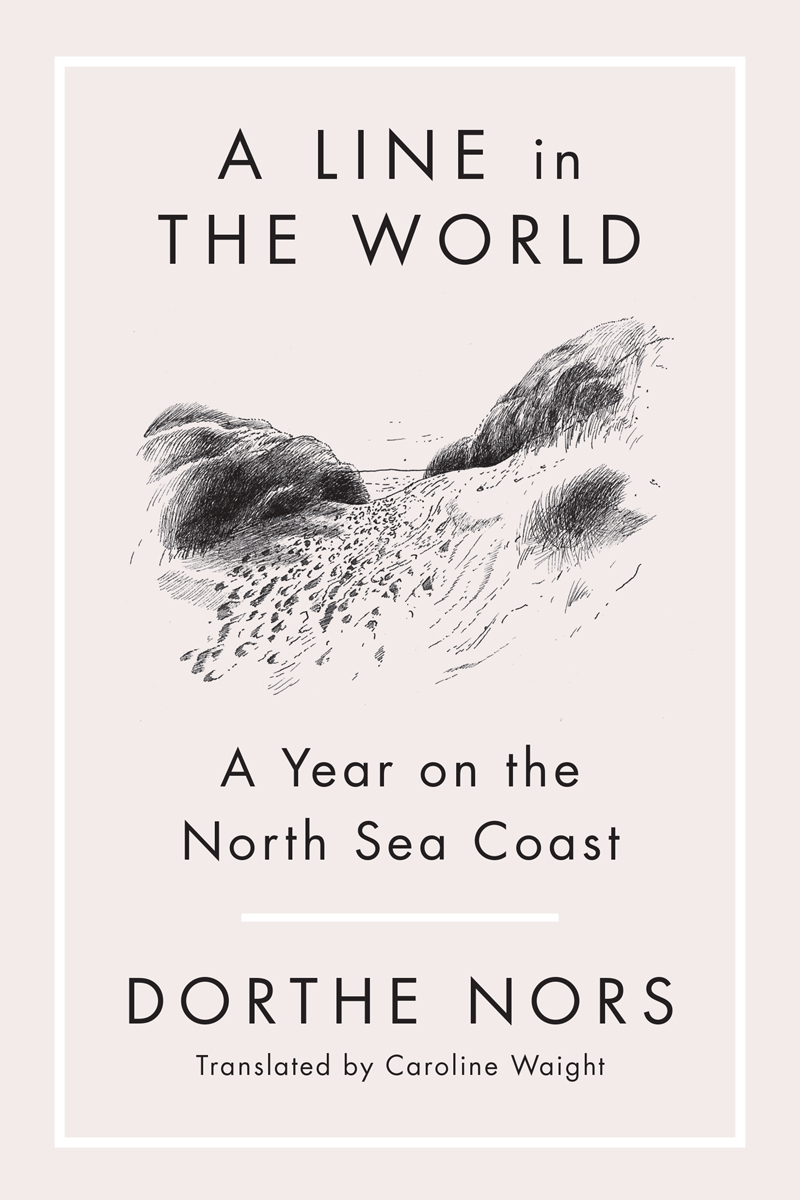 A Line in the World: A Year on the North Sea Coast, by Dorthe Nors, translated by Caroline Waight, illustrated by Signe Parkins,
Graywolf Press, 238 pages, $16

We have lived in the golden age of the dérive, a century of psychogeography with Walter Benjamin, W. G. Sebald, Rebecca Solnit, and Robert Macfarlane, et al., all walking and writing, turning their attention to place. Many (me included) have followed Benjamin’s dictate: “To lose one’s way in a city, as one loses one’s way in a forest, requires some schooling.” Entering this tradition in a sidewise fashion is Dorthe Nors, the Danish fiction writer, who is not in a city, not lost, and not walking. In her first nonfiction work, A Line in the World, she travels six hundred miles of the North Sea coast in her old Toyota with her parents’ stained road atlas.

The book and its themes make me think of a tiny saffron salamander, the red eft, that lives on my land, and that creature’s deep sense of place. The other side of being lost isn’t just knowing where you’re going, but rather knowing somewhere that’s held inside yourself. This eft, the juvenile form of the Eastern newt, has an ineffable, improbable sense of home. It wanders miles and miles into damp forests only to return one rainy spring night to its home pond. The eft contains, scientists speculate, a small bit of iron, like an inner compass. Nors writes of such peregrinations, like the migration routes of birds. They too, it turns out, have an inner compass, and this subliminal sense of home is Nors’s subject.

In her stories, the characters are often women in danger of disappearing into middle-aged invisibility. They are also funny, written with almost blunt affectlessness that, at least in translation, hews to the Danish habit of not drawing too much attention to oneself. (A bit like Midwesterners.) Sonja of the Man Booker International Prize–nominated Mirror, Shoulder, Signal (2018) learns to drive—but is too old for such lessons. She’s stuck, unable to change gears (literally and figuratively). Sonja also translates Scandinavian crime fiction (which is comic) and longs to return to Jutland in rural Denmark. Jutland makes up the bulk of the country and is the setting for much of A Line. Nors returned there to live not long before beginning these essays.

She sets out with amber in her pocket. She found it on the beach and writes that usually she’d put it in her mouth, but this piece is too big. Produced by trees extinct for some thirty million years, the amber washes up on the shore. I see her sucking on the fossilized resin as if eating time and place as she travels.

Nors was supposed to be working on a novel when she was asked to write a coffee-table book on the Danish coast. She said no but couldn’t stop thinking, “dreaming,” she says, of the journey. Prone to doing “the opposite of what was expected of me” (a trait shared with her fictional characters), she started writing. And kept writing, even after the original glossy book was finished. She’d send passages to her translator Caroline Waight, and now these collected essays make up the English-language version of A Line in the World, also the title of the photo book, which has only been published in Danish.

The essays here don’t follow her travels in a linear fashion but are built instead from a bricolage of recollections, histories, anecdotes, folklore, storms, shipwrecks, glaciers, geology, geography, and hydrology. Sandbars move, riptides come—rogue waves she links to love, to the day her mother dragged her from the surf’s deadly grip. Medieval church frescoes are a way into writing of her mother—a hairdresser—becoming a painter. The escape offered by her family’s makeshift cabin is undermined because it’s across from a chemical plant. The facility’s multiple spills give Nors an opening to talk about climate and catastrophe as well as the local amber-carver, Aage Hansen, an unlikely enviro campaigner who first identified the disasters through his discovery of dead and dying fish and birds.

Each chapter is pieced from elements that seem random yet are so carefully constructed that to quote them neuters her writing’s power. In “The Shortest Night,” effigies of women are consumed by bonfires on the solstice, with its unending northern sunlight. “Everything,” Nors writes, “has opened and yielded. A rattling door onto the darkness. We burn a female doll in that opening, and I’ve never felt much like taking part.” This concludes in a swirl of time where all the essay’s elements exist together at once. She is watching a ferry land, seeing the bonfires, hearing a song, and looks up, channeling all of it into her writing. The chapter also gives birth to this meditation: “The power of place. You came here once with all you had, left it and travelled on. And so it is filled with fragments of memory.”

How place holds history: that is Nors’s story. The etymology of “landscape” traces back to the Dutch, to shaping the land, but there is also how a landscape shapes us. In her writing, past and present can run together both in tense and location. One passage three paragraphs long elides decades: “It’s childhood I find here . . . It’s my grandmother . . . It’s my oldest brother . . . It’s spring outside, but in my memory it’s October.” Time is alive and held in a place. It can also be deadly. One stark line I love about a peninsula with buried World War II munitions: “You could go for a walk and get your legs blown off by the past.”

She even approaches a theory of psychogeography, though she wouldn’t call it that, nothing so grand and pretentious. Instead, in “The Tracks around Bulbjerg,” she sits alone on a cliff and messages a friend, a neuropsychologist. Their conversation links neural pathways to actual paths over the bluff and dunes. Nors taps out: “The landscape is an archive of memory,” to which the friend responds with a “smiley” and says too that our experiences of a place are shaped by our cultural knowledge. The friend also says that in the woods she sees trolls. This friend is Norwegian.

“Language is a marker that determines your fate,” Nors writes. Reading A Line from the US, from my particular place in the US, I can’t help but contemplate the Indigenous language and knowledge that is tied to this land and its place names. Here in the Catskills, the Munsee Lenape people made their summer home along the river that cuts through my village. Now that summer home is full of other people’s second homes, and I think of all those who have come, the Dutch and the English, followed by other immigrants and tourists, and I wonder what gets displaced each time, what knowledge—but also what new meanings accrue? Nors, writing of a place thousands of miles away, makes clear that time, space, and memory aren’t abstract and detached from each other, but held together—in this land I live on and in the land she traverses in her book.

Then, there is the eft. It is magic for many reasons. It can regenerate limbs, its heart and eyes even, not to mention its magnetic sense of home. Nors writes, “We can’t escape the force that draws us through the world. We have magnets in our bodies.” The night the eft returns to its home pond now has a name, the Big Night, and people will gather on roads to escort the animal across. It also has a suicide pact with wet pavement. Today as I write there’s a rainstorm, and I rescue a half dozen of them, some as small as my thumbnail.

Jennifer Kabat’s books Gentian and Nightshining will be published by Milkweed Editions in 2024. Her writing has been in Best American Essays, Granta, BOMB, Harper’s, and McSweeney’s. She lives in rural upstate New York and serves on her volunteer fire department.